on my diy board and my Metroboard i feel im not getting belt tension right getting clicking in break so i tighten then get clicking on acceleration so i losssen. is there any tits or tricks for doing this i tryed metroboards tuiner for this it drove me mad

What’s clicking? Is the belt skipping teeth? Perhaps it’s not the belt. My general rule of thumb for 12mm dual drive is to make it on the looser side without having it skip when I brake.

ya skippng,i feel i never have it right

My feeling with belt tension is that I believe the teeth skipping means I need to tighten more, but then I broke belts by tightening too much also. This is why I prefer hub motors, lol. But I should learn to tighten belt drives better. Some day.

The nice thing about wider belts is tightening is not terribly important, especially on dual drive.

IMO, tightening belts with a guitar tuner is simply ridiculous. Belts don’t need to be so tight that they vibrate like a guitar string! That is just gonna over stress your motor bearings and wear out your belts prematurely. Running your belts with some play in them will make your bearings and belts last longer. Just try to anticipate your stops and brake gradually.

Could be stemming from another problem to be fair. I’m ~85kg and my first attempt DIY was a single drive 9mm. Skipped like mad on any harsh acceleration and braking. 15mm now, no skip in sight

You could get yourself a Trummeter, but they’re not cheap.

Adding an idler could solve your problems, I designed my motor mounts with 2 idlers each, complete overkill but will make it way lower maintenance and I need the torque for the insane hills here in Boston.

I had a lot of problems tightening the belts, I had 3 builds and on all of them, no matter what, the belt skipped on hard braking almost before dead stop.

I adjusted the belts so they have minimum play and since then I had no skipping or episodes of belts braking on me.

However, getting the perfect tightening adjustment was a trial and error, so you should do that once and you will know how to do it forever.

On the other hand I used the same play on my Evolve Bamboo GT and the aluminum pullies were worn out after only 1 day.

So, not all applications are the same, you will have to test, first just leave a fair belt play and go for a spin, adjust until it stops skipping, you’re done.

I had trouble with my metroboard getting the belt tension just right - until I did this : throw away the belt tensioning tool and just use your hand. Pull it as tight as you can with your hand while torquing it down. This will be just about the right amount of tension! Be sure to tighten the bolts down enough that it won’t slip on the mount.

Not everyone has the same strength

You definitely don’t need to use much strength to tighten belts. If you’re struggling then you are overtightening 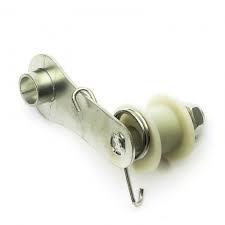