just wondering if there is any consensus on how to mount your motor so you put the least amount of stress on your motor cables. i’m still in the process of building my first board so i don’t have any real experience yet but i assume that they get bent a lot during tight turns. because of the 4 bolts, the motor can be attached to the mount in 4 different angles. more specifically i’m asking if one of these is to be preferred. This is a bad picture but they should be like this. 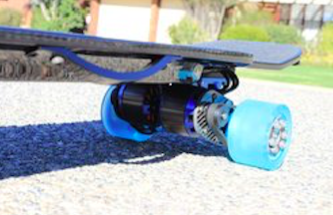 Now why is that? Out of curiosity- it seems like you’d want it away from the wheels and directly to the enclosure for no possibility of rubbing.

I did mine this way. But I think @longhairedboy has the best system for motor wires hands down. The worst thing you can do , no offense, is have the motor wires exit towards your enclosure. Everytime you turn you will be bending the phase wires and eventually you will have issues from exposed or broken wires. Phase wires need to be routed to the trucks so movement is completely isolated.

My wires have enough play that they flex in the middle, not where they come out of the motors. Running them in the rear and then forward would require longer wires and would place them under the motors where they could be damaged by the motors or mounts during hard carves. ( this happened to me on an older setup when I ran the wires back and then foreard) So I’ve been running it this way for at least a year now with no problems.

Still a lot of travel when the trucks turn and I have seen a lot of motors damaged from phase wires moving too much so I lean towards having my wires take a path closer to the kingpin to keep movement to a minimum. I do have the luxury of routing phase wires under my baseplates and into a hollow core deck but they could also be protected board side with a small plastic cover between the battery enclosure and baseplate. In the end you end up with a cleaner build too. god damn dude you’re prolific with these things! Love how each one has its own identity…

@Jaydan Answer: Toward the back and looped under. Feel free to use any sort of cable management device to bind the cables to the deck but be sure to give yourself plenty of spring room in the loop’s coil.

Thanks for all the replies! I will probably lead the wires around the baseplate. Should be fine since I’m building a single drive. That way I can avoid the stress on the cables and the problem of ‘motorbiting’ the cables.