A friend and I connected up a BMS like in the diagram below and things began to smoke after the balance leads were plugged-in.

Where did we go wrong? your diagram looks correct. but there is a fairly good chance that what you did didn’t match your diagram. I reckon you got one of the balance leads out of sequence, and that would have burnt out a row of resistors on the BMS board.

Something about the wiring portion of the balance wires to the BMS seems off. I agree with Hornet, while the way you wired the balance leads seems correct, doing it hornets way is just much cleaner as its 3 balance wires per 3s battery which just clicks. The way you wired it in the original can give way to more confusion which is what i think may have happened.

well spoted should be 9s he used a 10s

balance connector usually has (NoOfCells + 1) wires. Assuming this is a 9s BMS that has 10 ports then you have to also wire ground.

EDIT : “Assuming this is a 9s BMS” this assumption was wrong therefore this diagram is wrong. DO NOT USE THIS DIAGRAM. 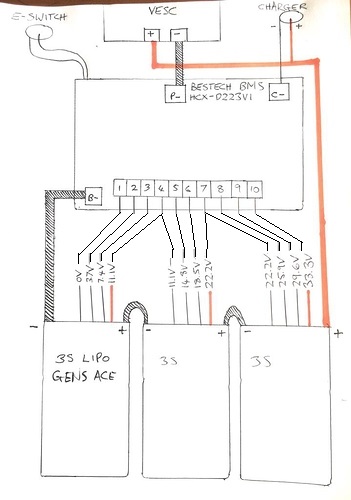 The port 4 and 7 could be connected with either of the 2 wires i have shown, they should do the same things because they are connected, i have just shown both for clarity.

This means in your diagram you have connected 3.7v of cell 1 to ground inside the BMS. If you were lucky you just dumped current through a ground trace and there may be no long term damage. If you left it to long you may have just a burned trace that you could replace, this would be fairly obvious on the PCB. If not there may have been some resistors between between the plug and ground that may have cooked. If this is the case you would see them when you look at the PCB in the BMS.

To confirm that this is what happened i would expect to see the voltage of cell 1 pack 1 slightley lower than the others if you check with a multi meter.

Yea I have no clue about bestech bms’.

I had a look at the product page and they don’t even have any wiring diagrams. Can’t tell if OP bought the wrong board or what, seems weird that a 9s bms would have 10 balance leads. http://bestechpower.com/333v9spcmbmspcbforli-ionli-polymerbatterypack/PCM-D223V1.html

Thanks for all of the replies. Sorry, I forgot to mention the BMS is 10S but we’re only using a 9S pack, hence pin B10 being disconnected.

@ducktaperules, the first pin of the BMS balance connector is marked as B1, so we decided not to connect the balance lead which read 0v to the first pin.

When measuring the individual cell voltages, we kept the black multimeter probe attached to B-, and then measured each cell, making sure the voltage increased by the correct amount (i.e. 3.7v, 7.4v, 11.1v etc). Is this correct? 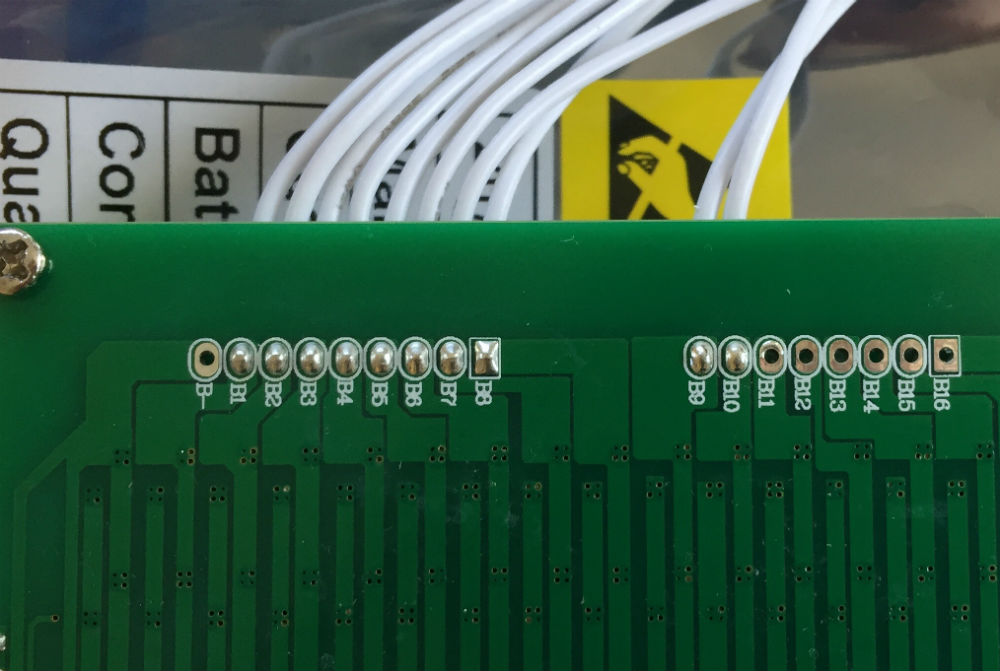 I have updated my BMS wiring diagram to match the pad and pin locations on the actually BMS.

Yea im fairly certain you cant use a 10s bms for a 9s battery. Dont quote me on that though

Yea im fairly certain you cant use a 10s bms for a 9s battery. Dont quote me on that though

You are correct. A Bestech 10s bms will not work with a 9s battery.

Your balance wiring is not correct. You should omit the ground balance wire of each pack and use the 3 positive wires.

This diagram is totally wrong. thanks for clarifying, i have put a note in my post so that no one uses that diagram Hi guys, I have a small problem. I’m using a 3*3S 4.5AH LIPO pack and a 10S 60A BMS from battery supports. The 10S BMS is of course compatible with a 9S pack! I contacted BS myself and they responded: “Yes, this BMS works the same for 9S battery...