ive got a charge/discharge bms 12s 80a (http://www.batterysupports.com/44v-48v-504v-12s-80a-12x-36v-lithium-ion-lipolymer-battery-bms-p-392.html) so I am right now into connecting that whole thing. The balance wires are no problem. I watched a ton of videos and read much but I am still not quite sure. Ive made a photo of like I think its correct but the cables which go to nothing are confusing me somehow. Maybe someone could help me a bit I would be more than thankful!! No worries its just sticked together to show. 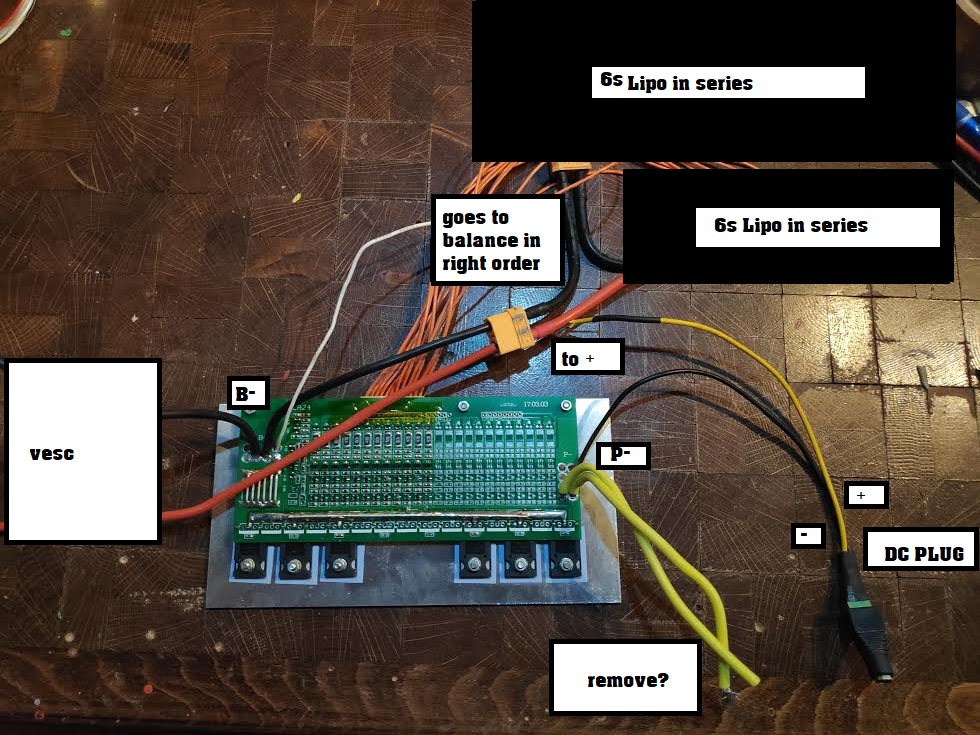 @Andy87 helped me a bit now it looks like this

I will ad a switch before the vesc 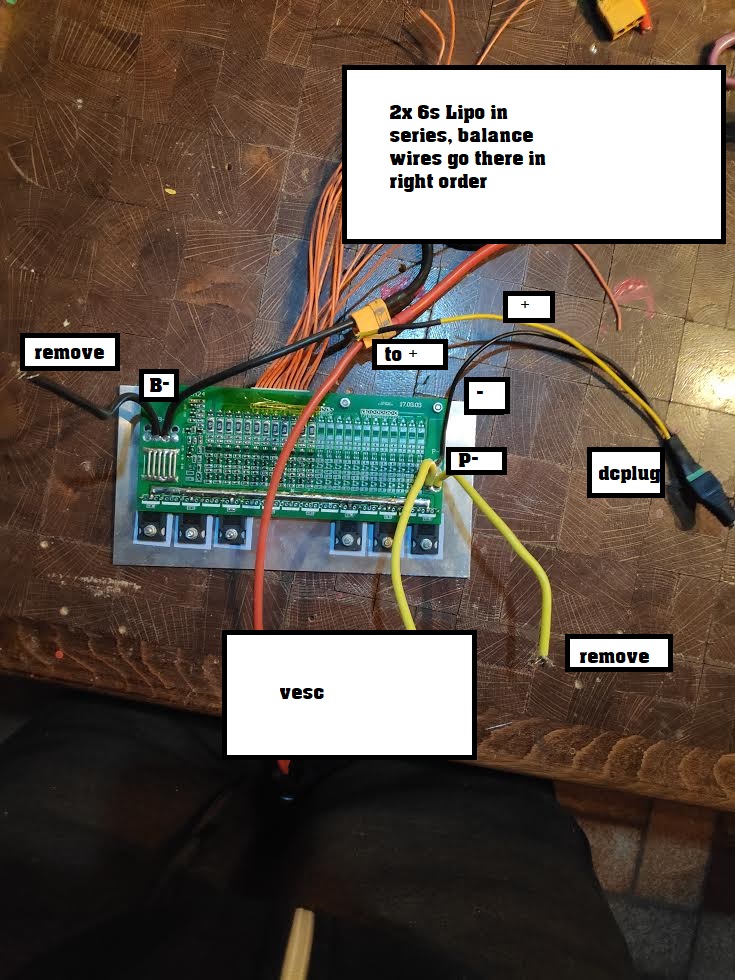 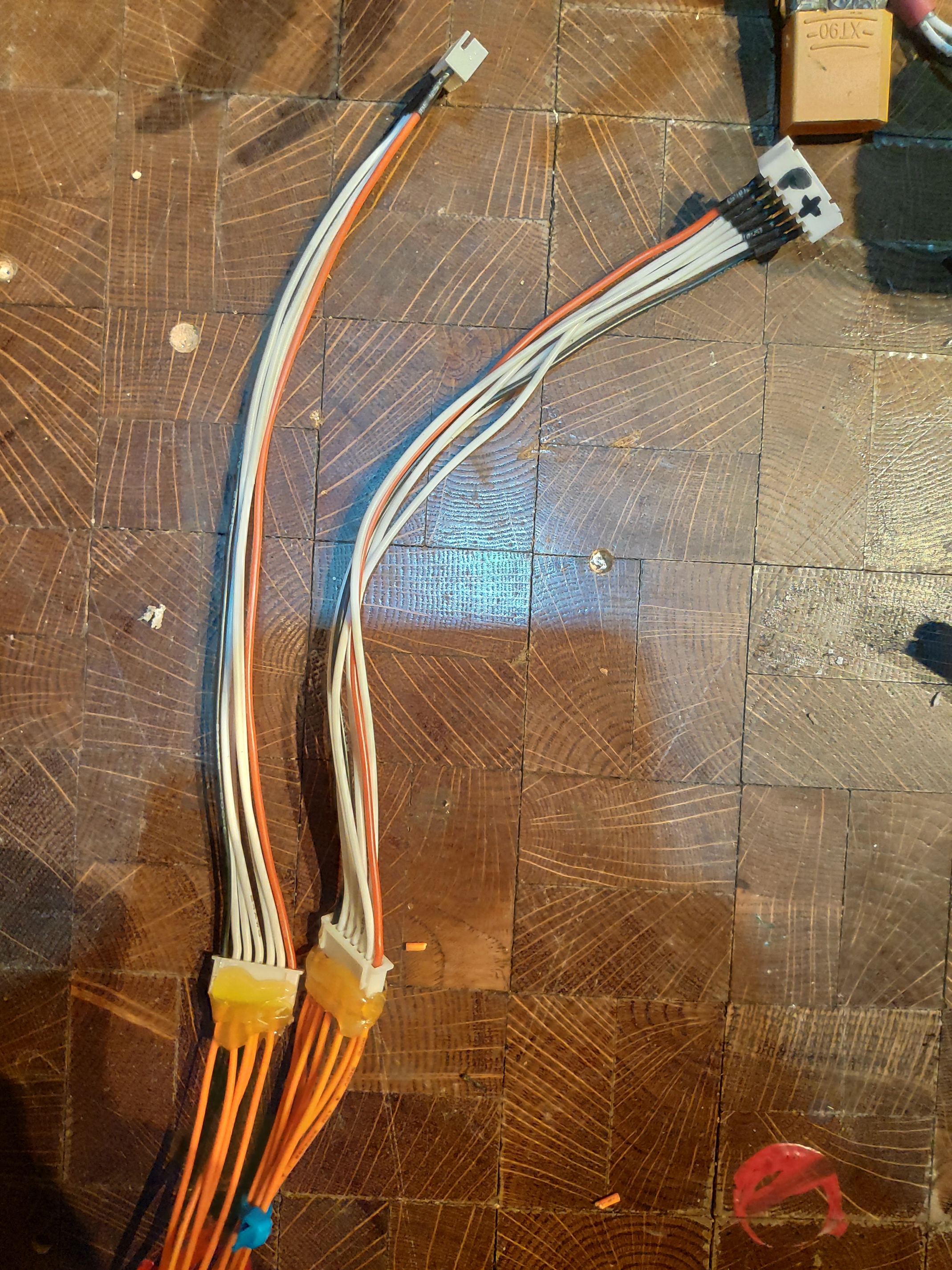 Ok so the balance wires I ordered like this, i started measuring the pins and startet with pin 12 - into small positive balance plug at the postive side of the “positive” battery - 44v. Then I went through all and on the other battery “the minus one” which is in series I skipped the first and last pin because I assume they are conected anyways with the big wire. The rest I left like in my last photo.

I think I did it correct?

Put a fuse on the charge port

I always see you mentioning the importance of putting a fuse on the charge port and I totally understand why, but how do you do it? Never wired a fuse before I’m sure it’s simple but I’m a visual learner. Do you have a photo?

There are photos on my new build thread

Cool! I’ll check it out, thanks. 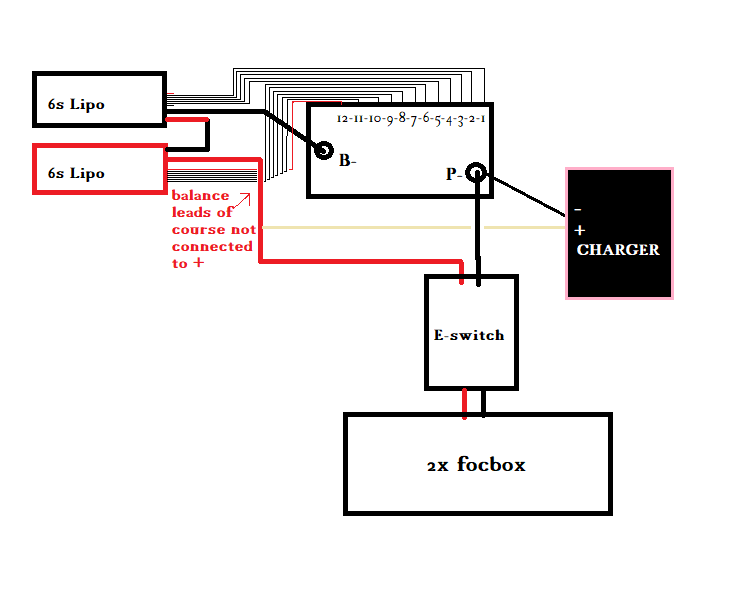 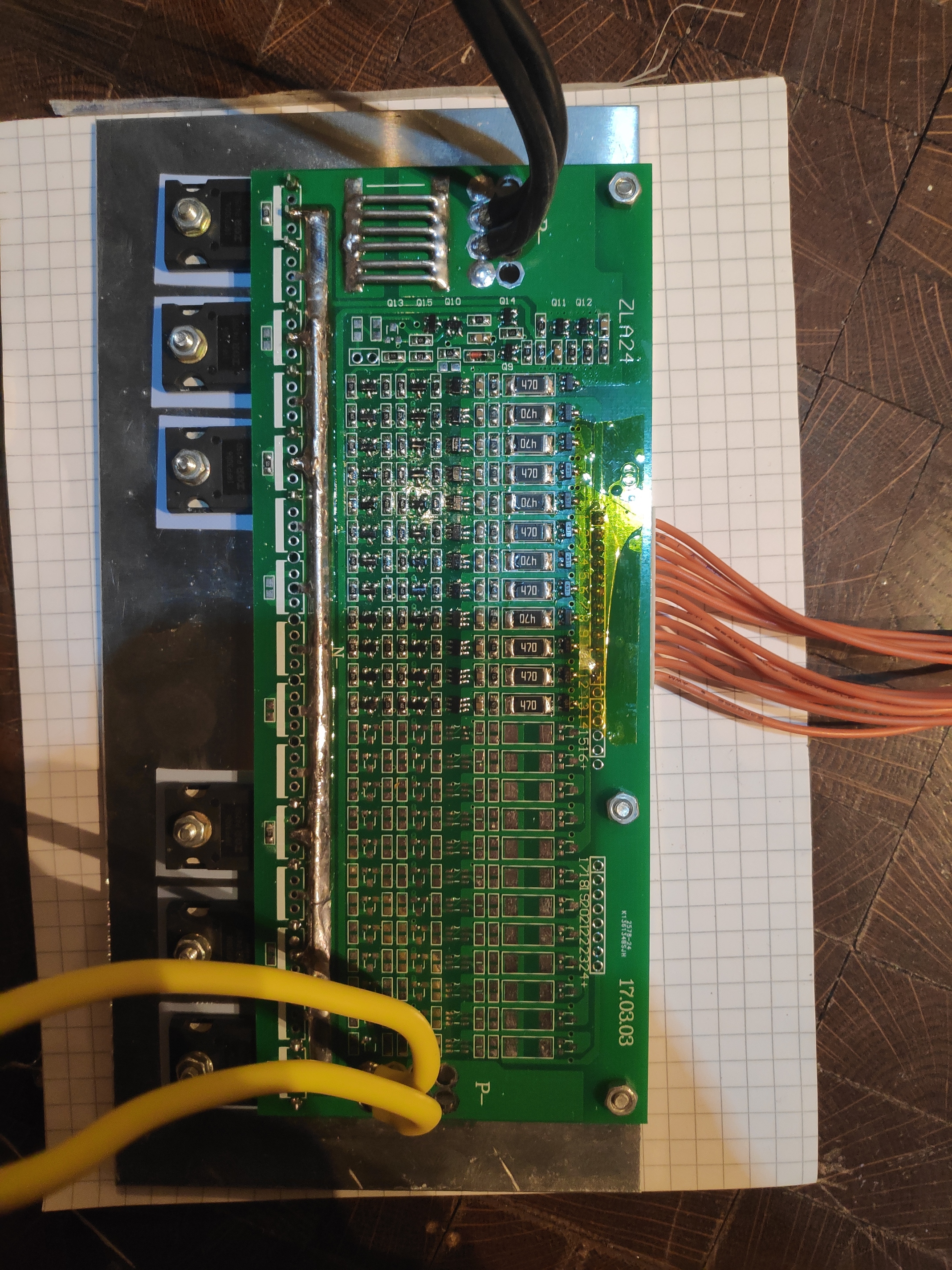 Thats how I would connect it. Hope you can see everything. Also a photo of the top of the bms (not connected to anything). I drawed no xt90 connections or sth like that. I think its correct. But not sure

Make sure that’s how it’s wired up

Ok guys no see. Its not the problem with the multimeter Iam. measuruning the voltages but I saw several pictures and video because the battery is at the + side I have to connect the first red small wire from the lipo to pin 12 at the bms. But that...

Each of your 6s batteries has 7 balance wires. One connected to negative, one to positive, and one in between each pair of cells. Since you have two of these in series, then the middle wires are redundant (the positive-most balance wire on 1 is the same as the negative-most wire on 2.)

After you take this into account, you have a total of 13 balance wires for the pack. One to negative (ground, 0v), and one to positive (44.4v), and one between each pair of cells.

Repeat this until you get to the end, where the 12th position gets the thirteenth balance wire (44.4v measuring from ground).

this helped a lot thanks man

for the fuse @b264 said. Just put it at the p or n at the wire of the charging port ? doesent matter, does it?

Ok I still dont get sth.

The side where B- goes into the battery at the outside is supposed to start with 3.8v at the balance plug according to the plan. But I already have the 44v up there. On the other battery where the outside is positive I have on the 2nd pin of the balance plug after the red cable 3.8v. But according to the plan should be 3.8v where the negative b- come in. Or does it really matter as long as I measure? I hope Iam not annoying already. But really want to learn that and not connect anything what blows at the end. 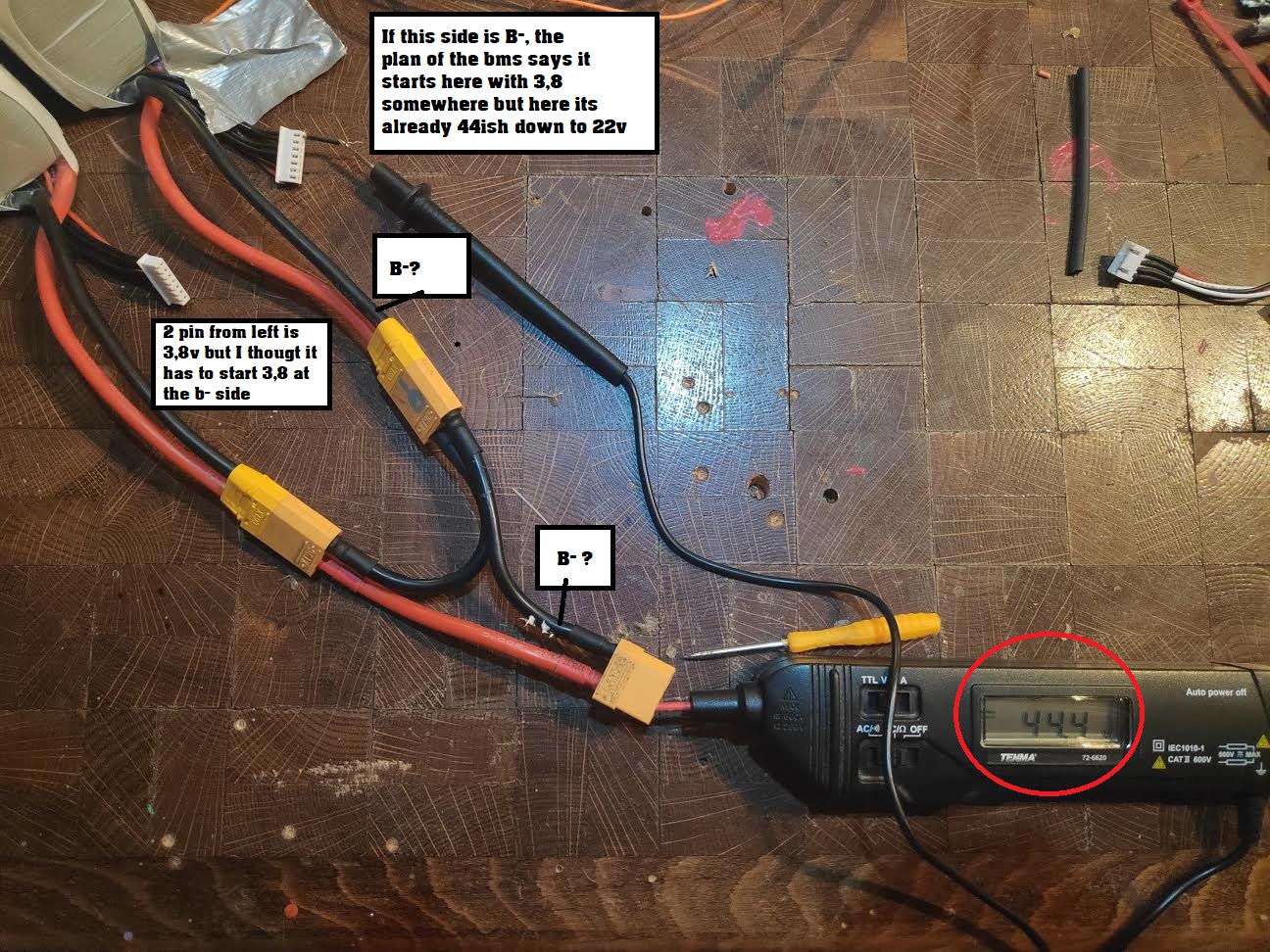 I think you are measuring backwards. The black probe should be on B- and you should measure by moving the other probe.

B- is your “zero”, and each balance lead should read progressively higher from there.

Jeah @Andy87 told me too. Now it makes sence 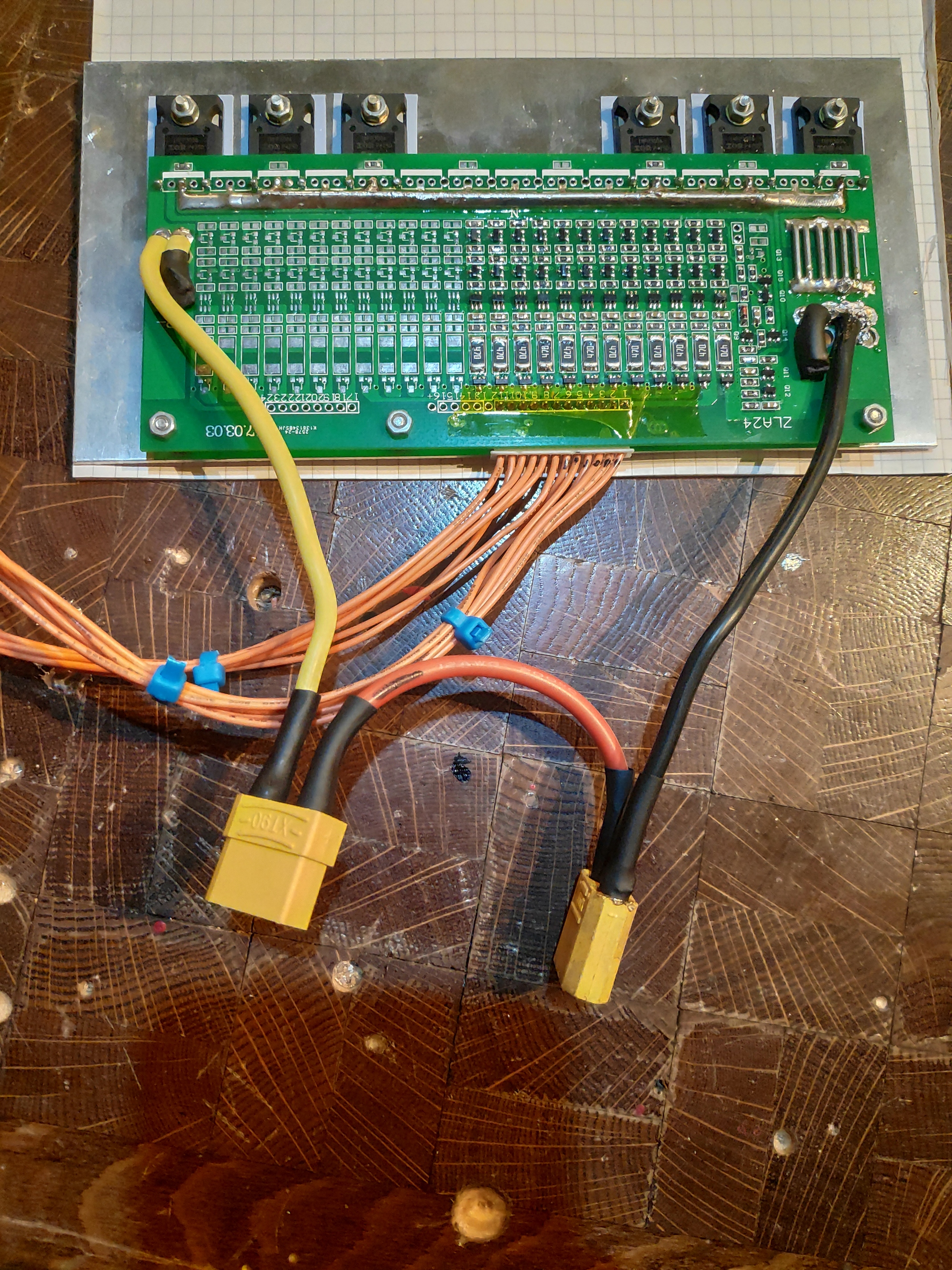 charge port is not soldered but the big wires are ok so, arent they? Watched the schematic and everything should be correct I think. Maybe someone can take a look

lipo conects at the right xt90, vesc at the left one

You’ll need another small red wire coming off that big one for the charge port. I can’t see the “B-” and “P-” labels so I can’t confirm that is correct