I have decided that I’m going to sell my Trampa Mountain board. The reason? It’s too much work for me. I’ve decided that even though an eskate is extremely fun, it’s not what I expected it to be when I built it last summer. Things break, and I have to repair them, and I simply don’t have the time or energy to do it.

So I want to be clear from the very beginning - this skateboard is not working right now, and that’s how I’m selling it. As I said, I don’t have the time or energy to repair it. Don’t buy this board unless you’re prepared to fix it and know how to.

I am 90% certain that the BMS is at fault. If you replace the BMS it should work again. The other 10% goes to the ESC (or ESCs as there are two of them). It could be that one or both of the ESCs are broken as well. Lucky for you, though - if you buy it, I’m sending you an extra unused ESC that I have laying around - for free! So if you’re good at math, and you trust my troubleshooting, you’ve probably realized by now that you’re 90% sure to get an extra ESC for free. (Yay!) Oh, and you also get 2 unused Enertion Nano-x controllers for free, just cause I got spares I don’t need anymore.

The brakedown happened last summer (yes, I haven’t touched the skateboard for a whole year - I told you, no time or energy). I was on my way home from work when the board just suddenly died. Took the bus home instead, and opened the board up to find that the positive wire from the battery pack had somehow managed to rub through the heatshrink and short itself on the BMS, which in turn had turned black in that area (pictures below). Didn’t want to fix it right away, so i kept letting it sit there, and all of a sudden it had been a whole year. So now I’ve decided that it’s too much maintenance to own a eskate, and that’s why I’m selling it as is.

I know selling a non-working board brings down the price compared to what I would’ve got if it was working, but i just can’t be arsed anymore. I want to get rid of it. 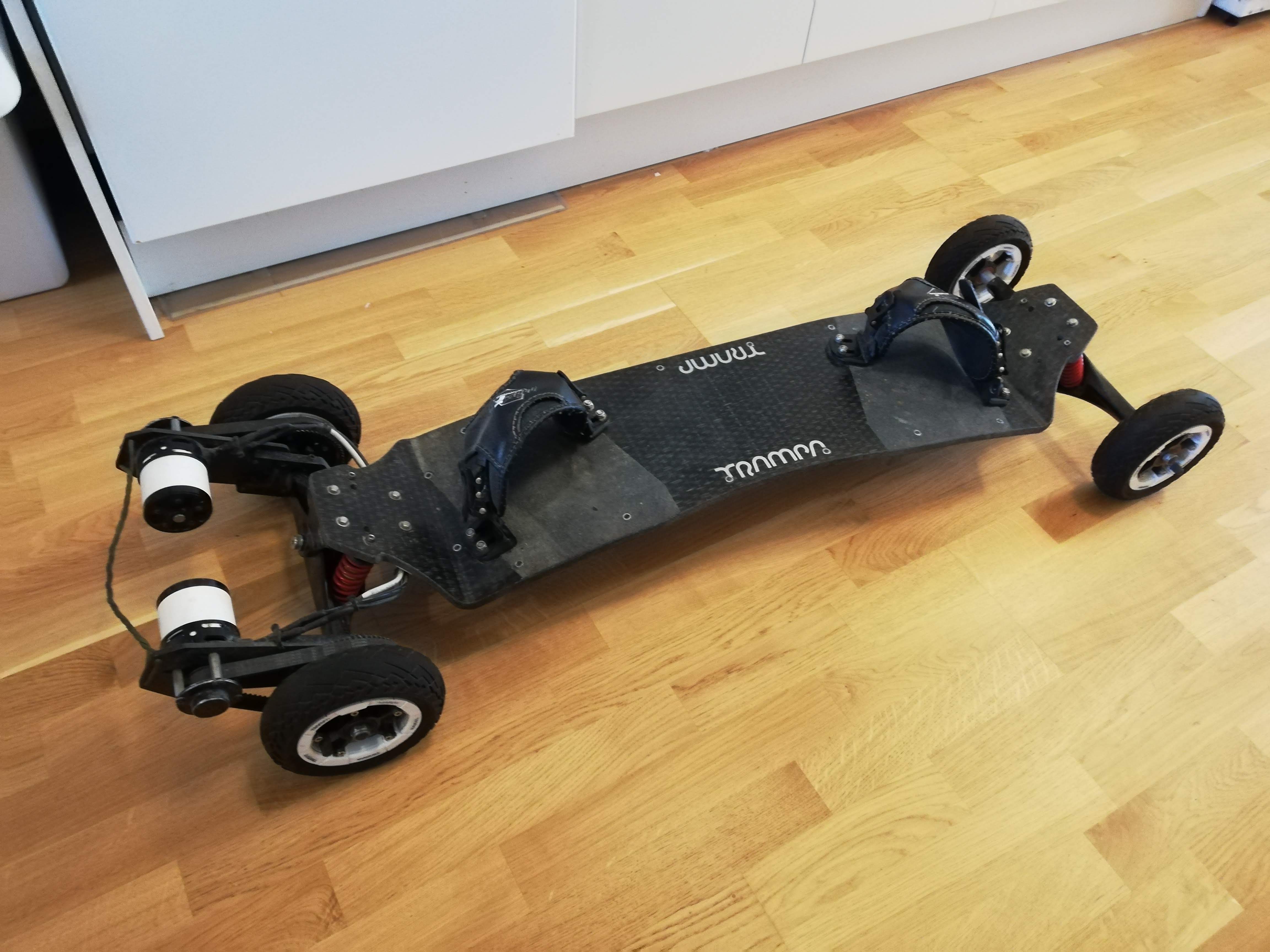 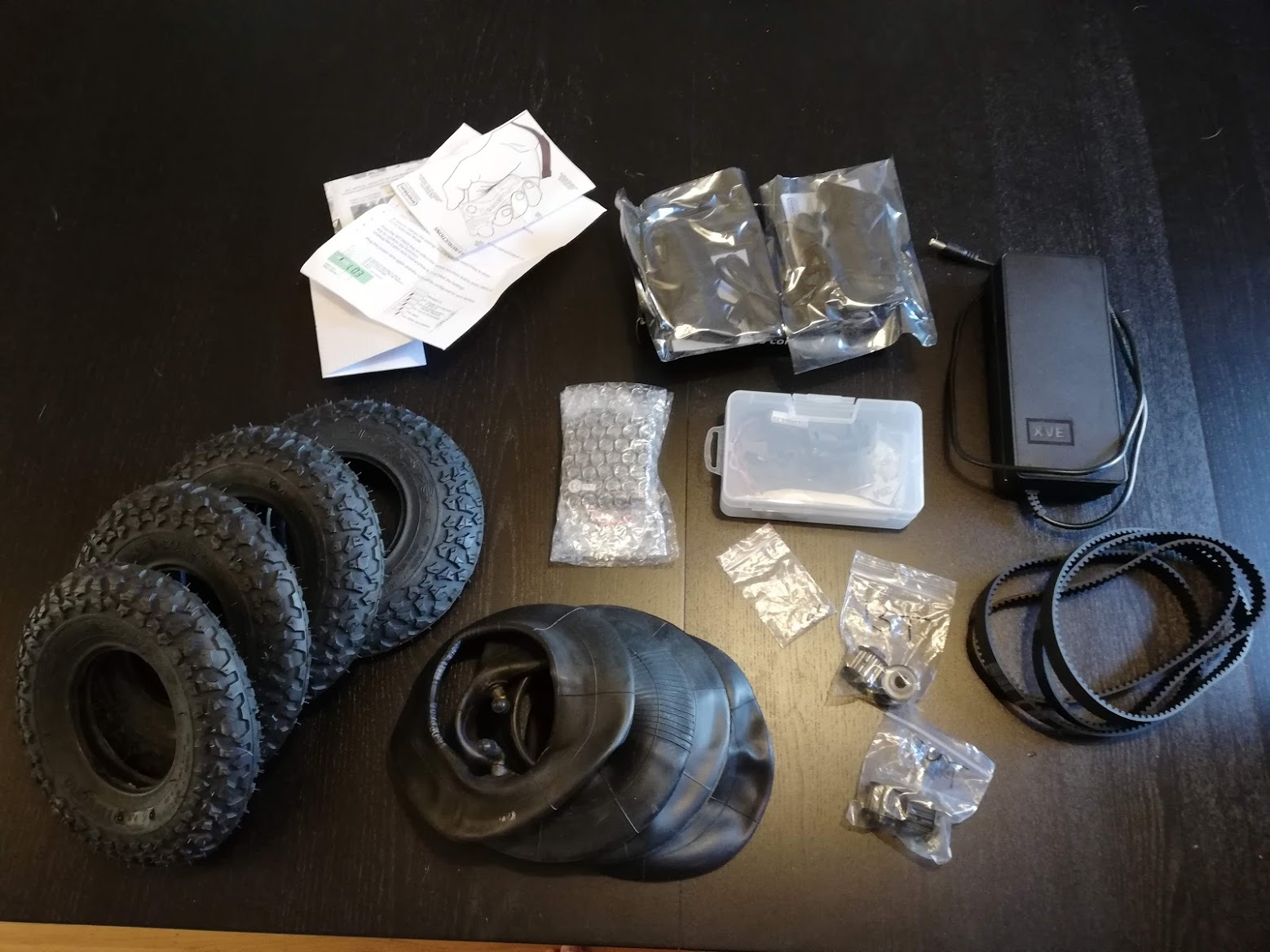 So now to the specs:

What I’m asking for this package, with a lot of extra parts, is 1800€, which I think is a pretty fair price, considering it cost over 2500€ to build, and it’s only been used for about 3-4 months. The rest of the time it’s just been standing, untouched. 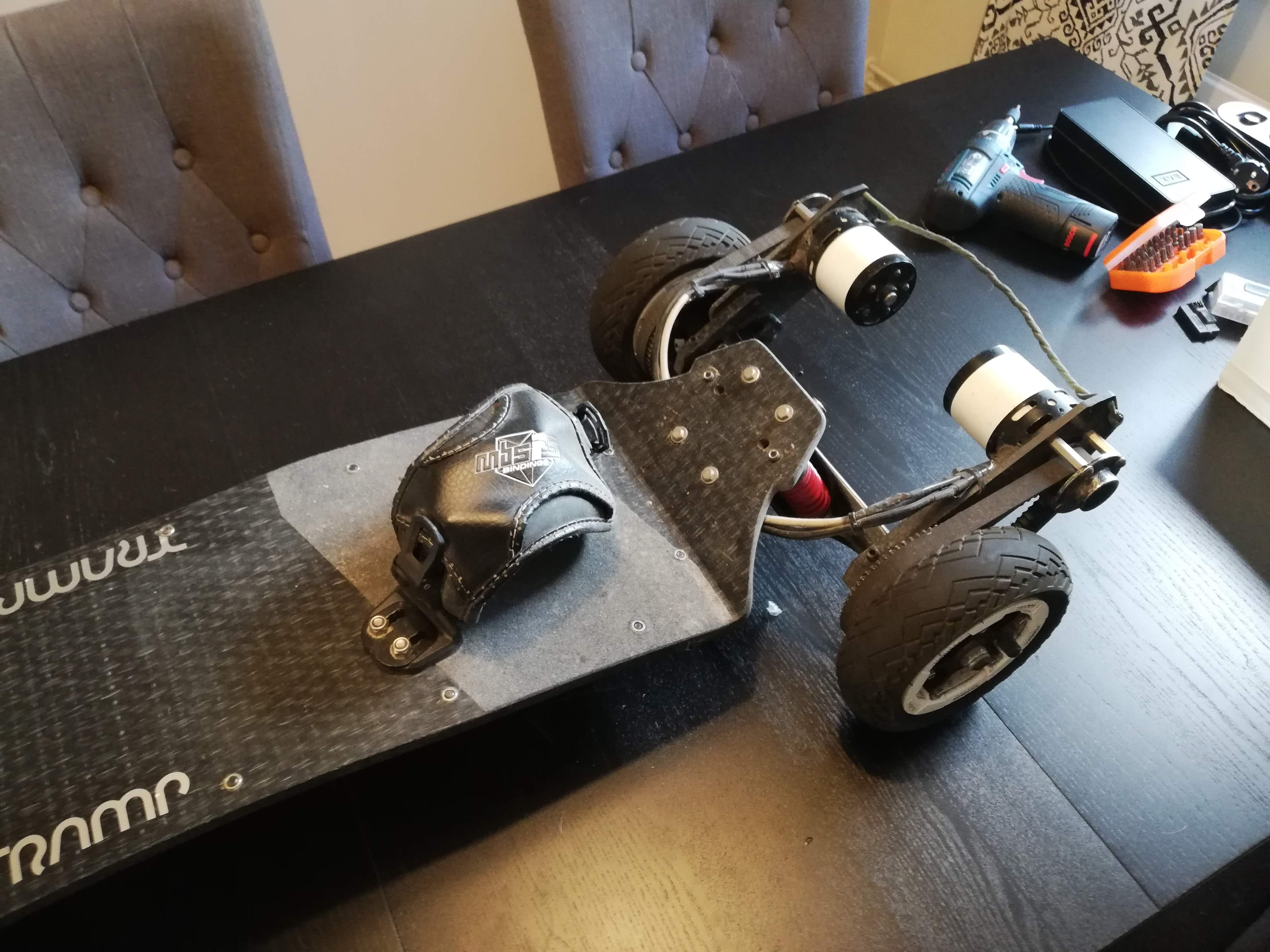 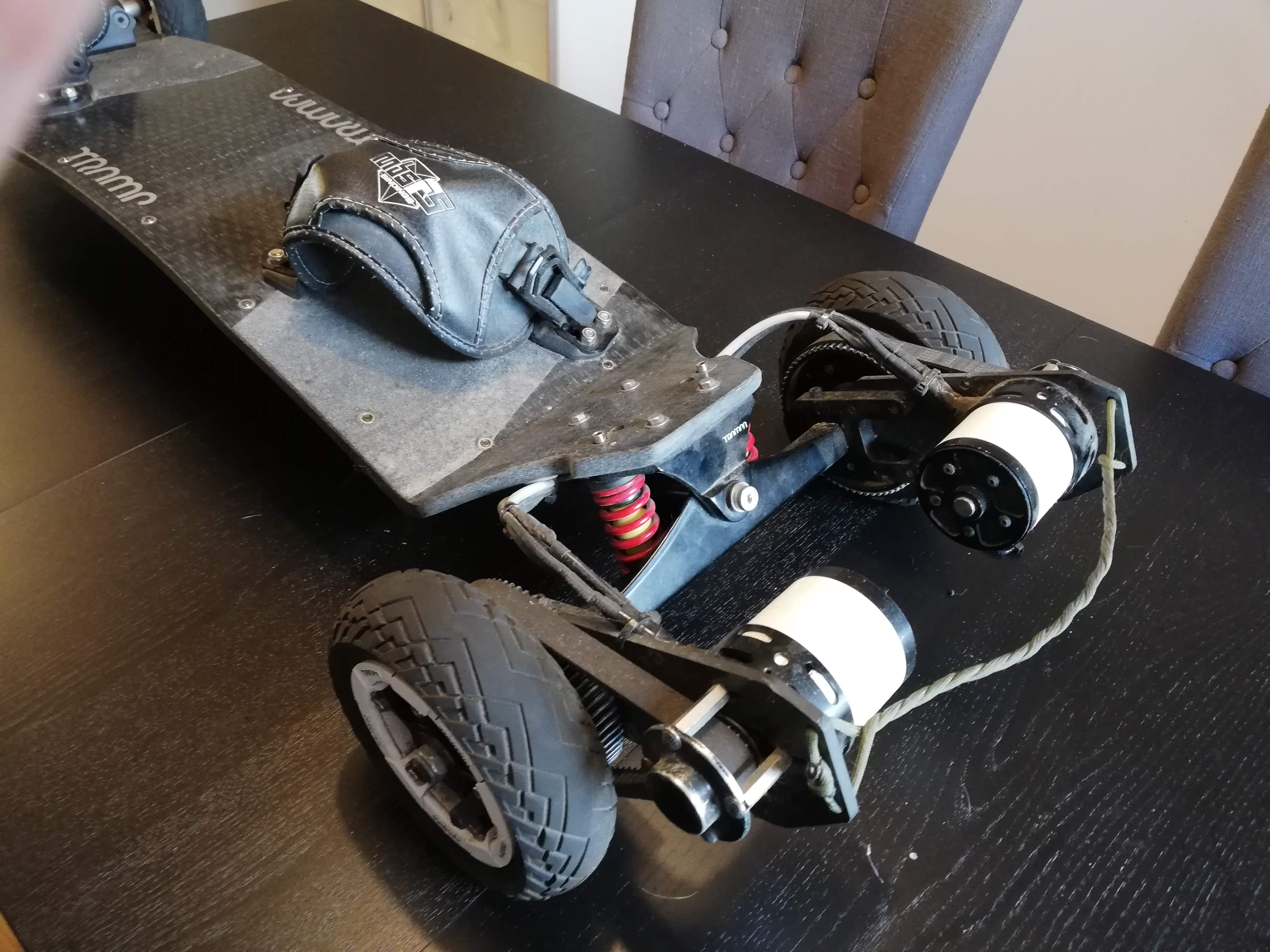 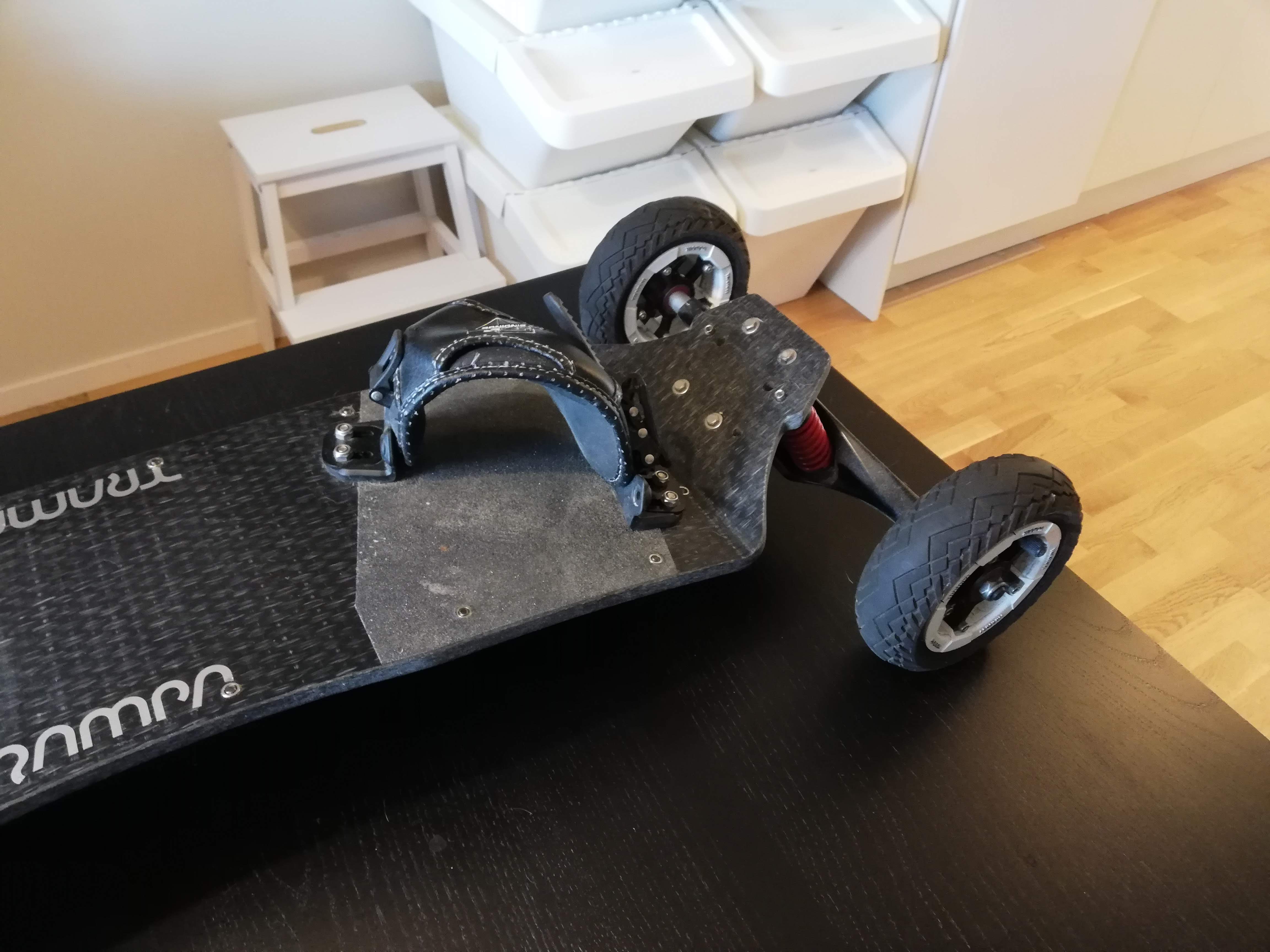 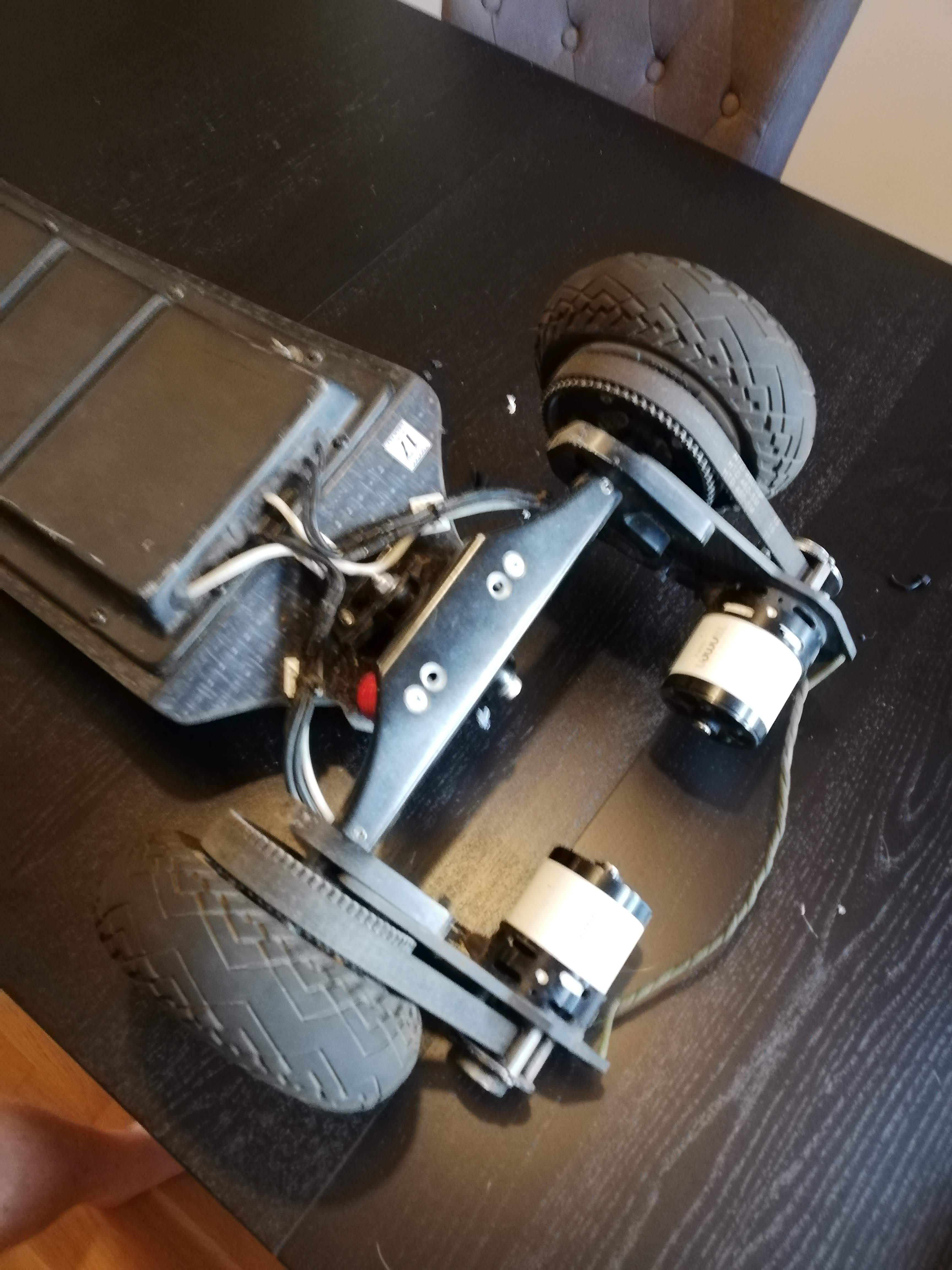 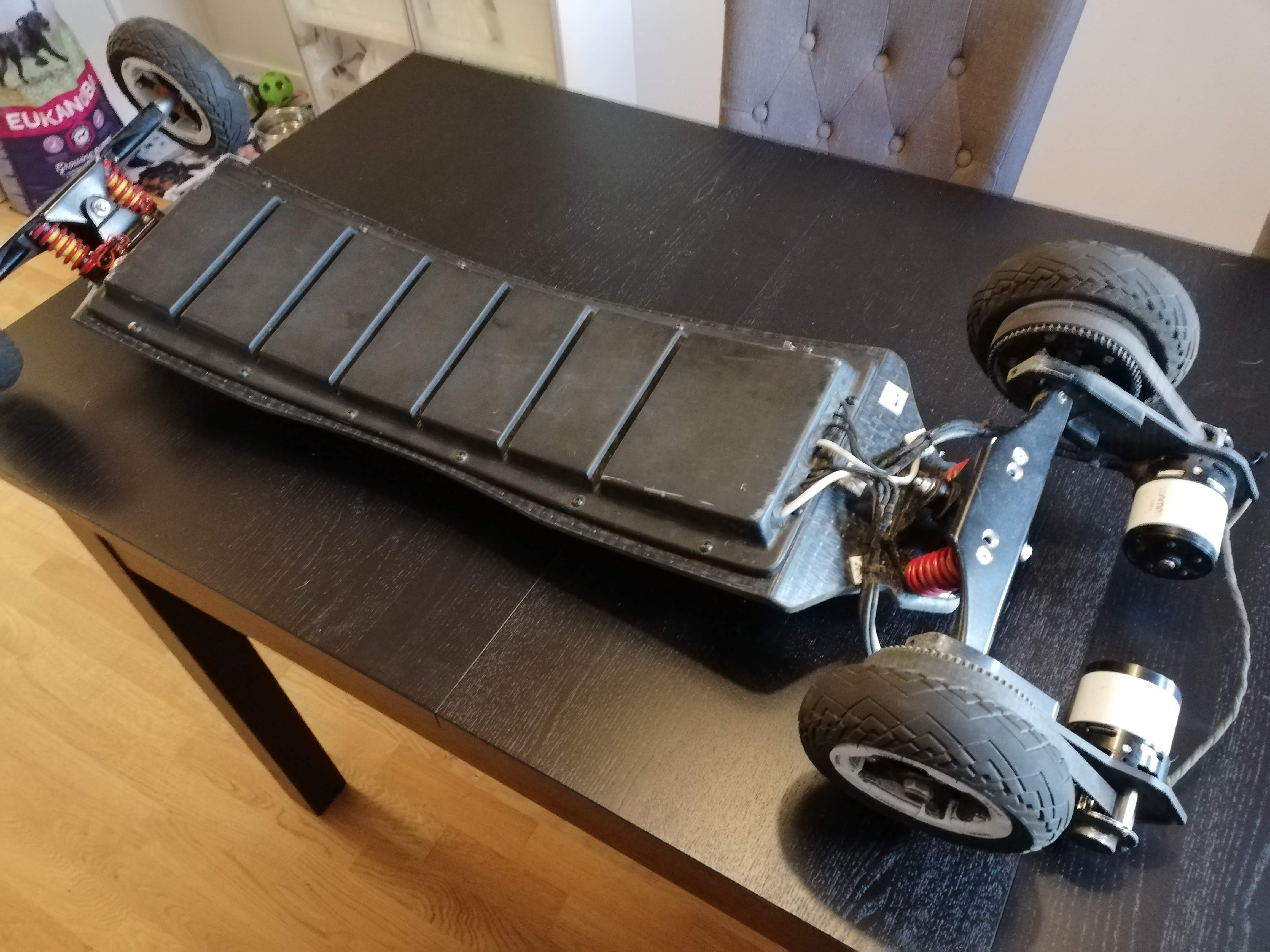 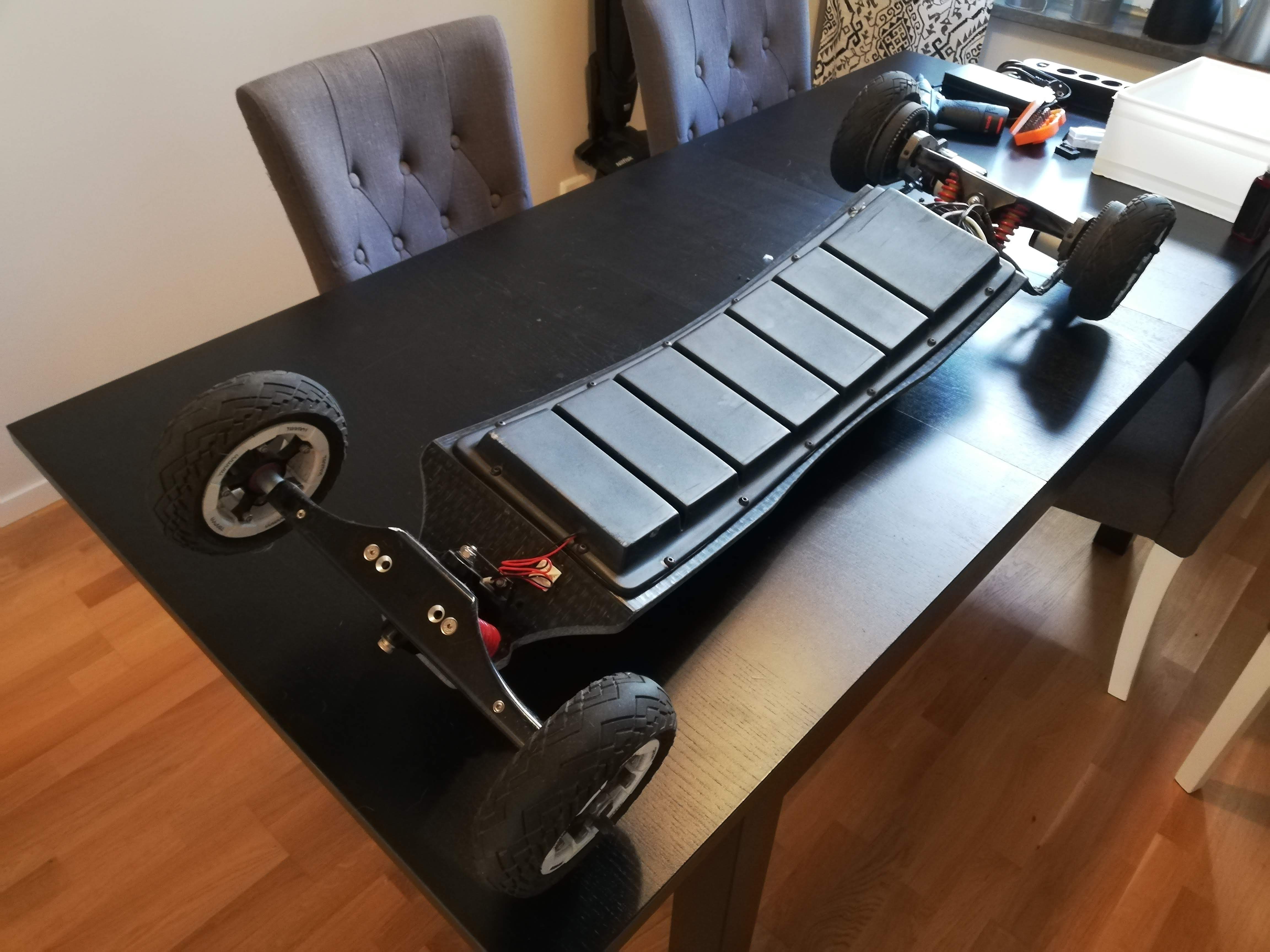 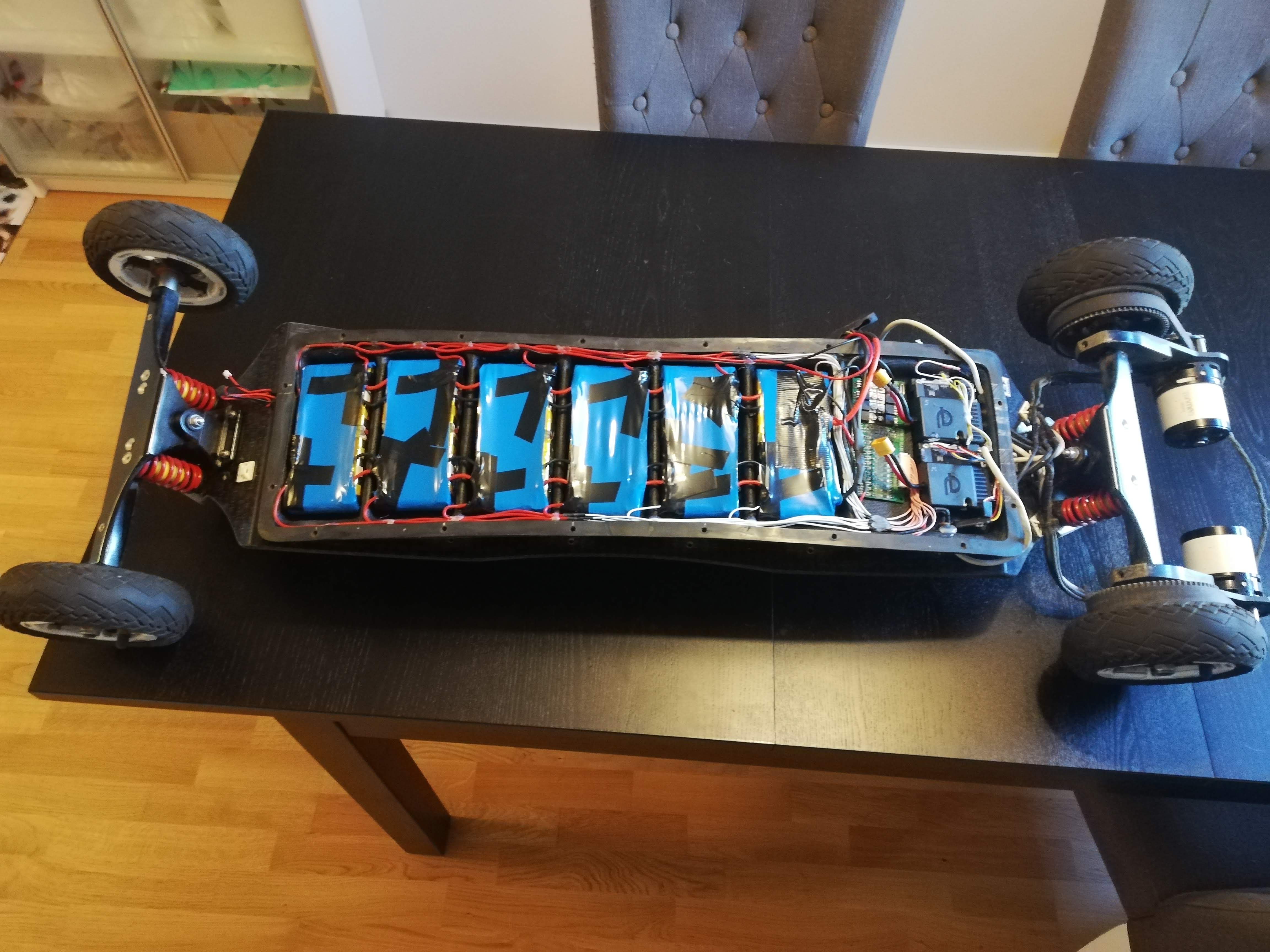 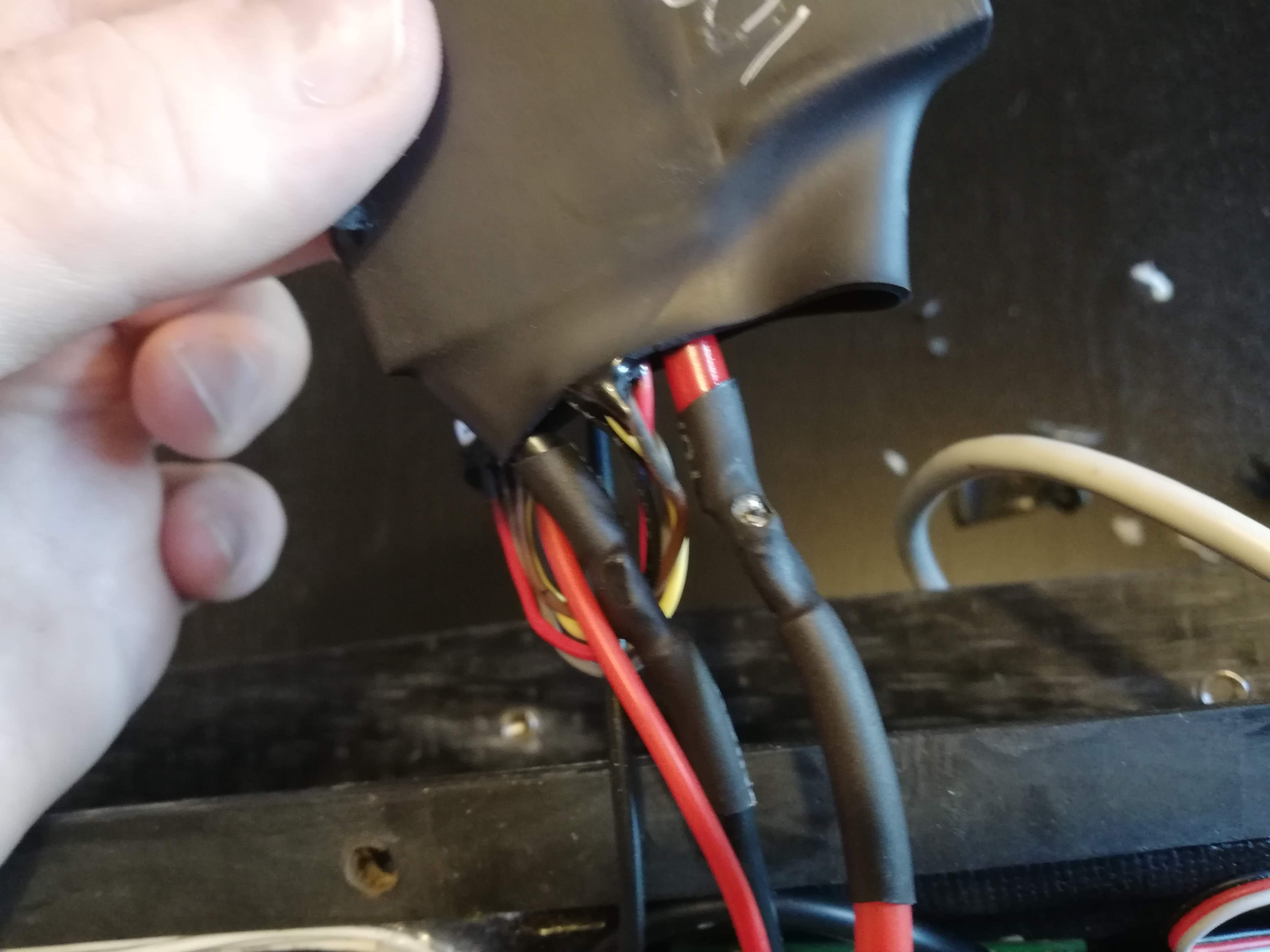 BRUh what happened to the BMS

Good luck with the sale, so many great parts!

As you can see in the last picture, part of the positive wire going to the battery pack got exposed somehow, touched the BMS, and… yeah.

Haha yeah that is what it looks like haha. Pretty easy 50 dollar fix for whoever picks this up

Hey, Would you be interested in a swap for a working (and working very well

) onewheel plus. Its only got 600 km’s on it and I have fitted a ranger kit with an ego battery for extra range.

Hey! Thanks, but no thanks. I’ve decided that an ebike is more my style, or possibly a fat scooter.

No problem. I’ve been commuting on a cruiser ebike 40 km’s each way for a few months and I can highly recommend it !