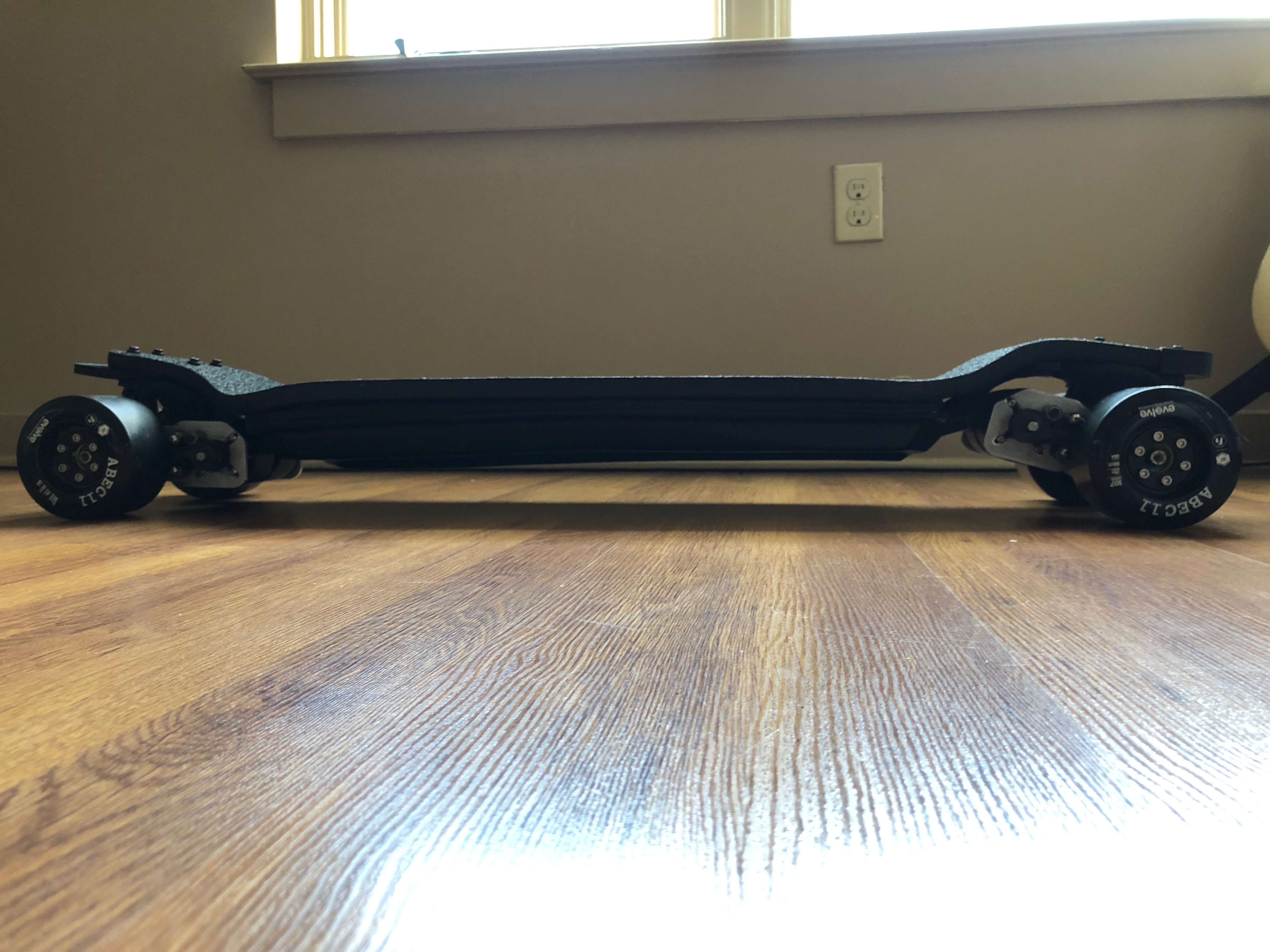 This is my third and finest build. All of mine have been 4WD, and I only have one at a time, because I’m a little bit of a minimalist and I always need to scavenge parts from the old for the new.

My first build was a Hummie gen 2 hubs build, which was great, but a time came when I really wanted to try out Cronins and bigger urethane wheels. That led to my second build, which was basically comprised of the same parts, as below, but on a shorter Hi5ber board. On that ride, there just wasn’t enough room for an enclosure that could house all the electronics and not collide with motor mounts, front and rear.

Mostly, I prefer the symmetry and the way 4WDs handle, but they have several ancillary benefits, like improved heat dissipation, traction, braking, torque, etc. Some 4X4s are probably designed as beasty hotrods, but I’ve always been aiming for strong & balanced torque and traction, in mine. 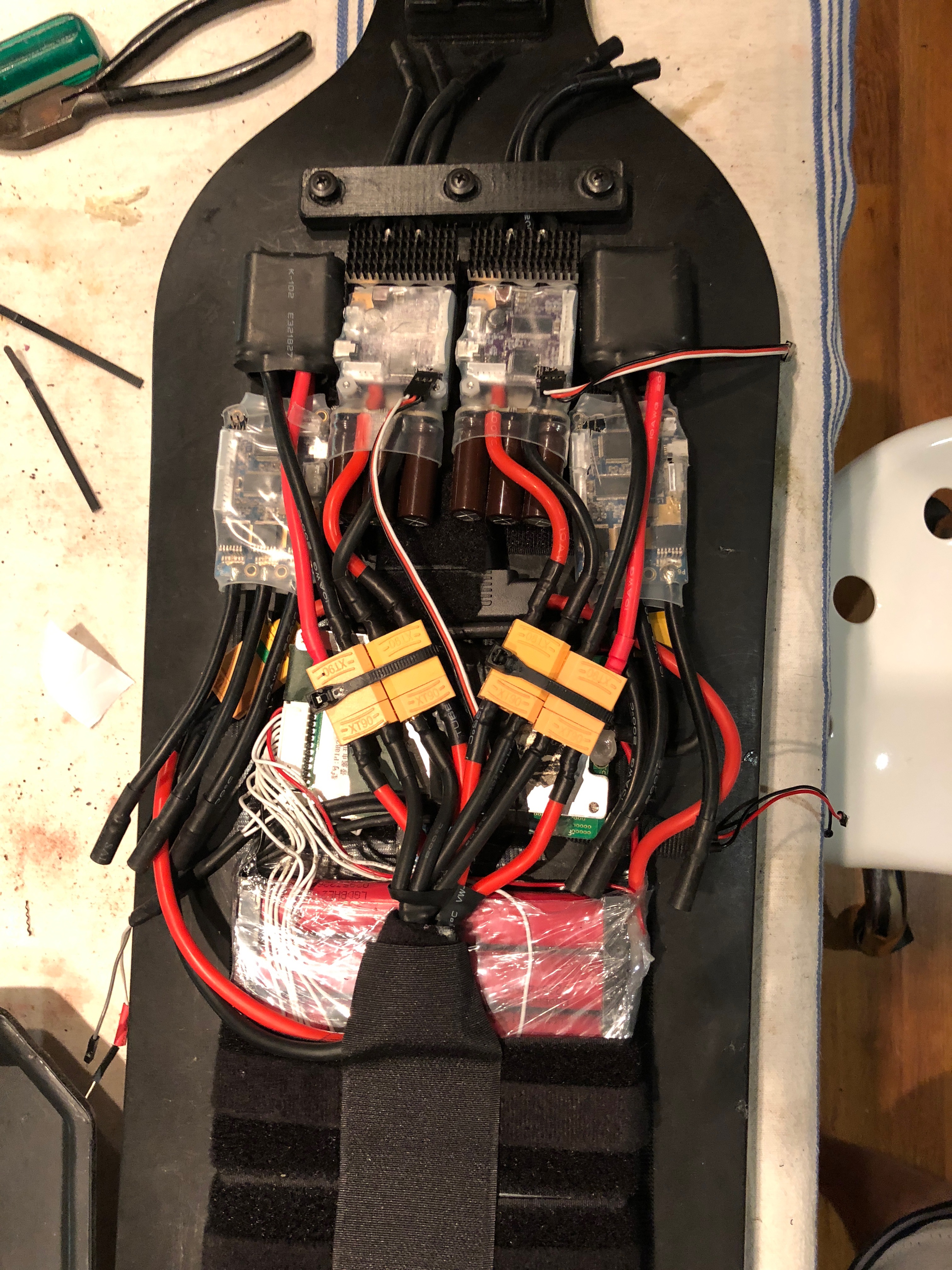 For this third build, I ripped all the components off of the Hi5ber and fabricated wires to make it all work on a Landyachtz Evo. I picked up tons of great info and inspiration on that deck, from forum members’ builds, and it was long enough for all of the 4WD components. I painted the Evo deck black to blend with the enclosure. 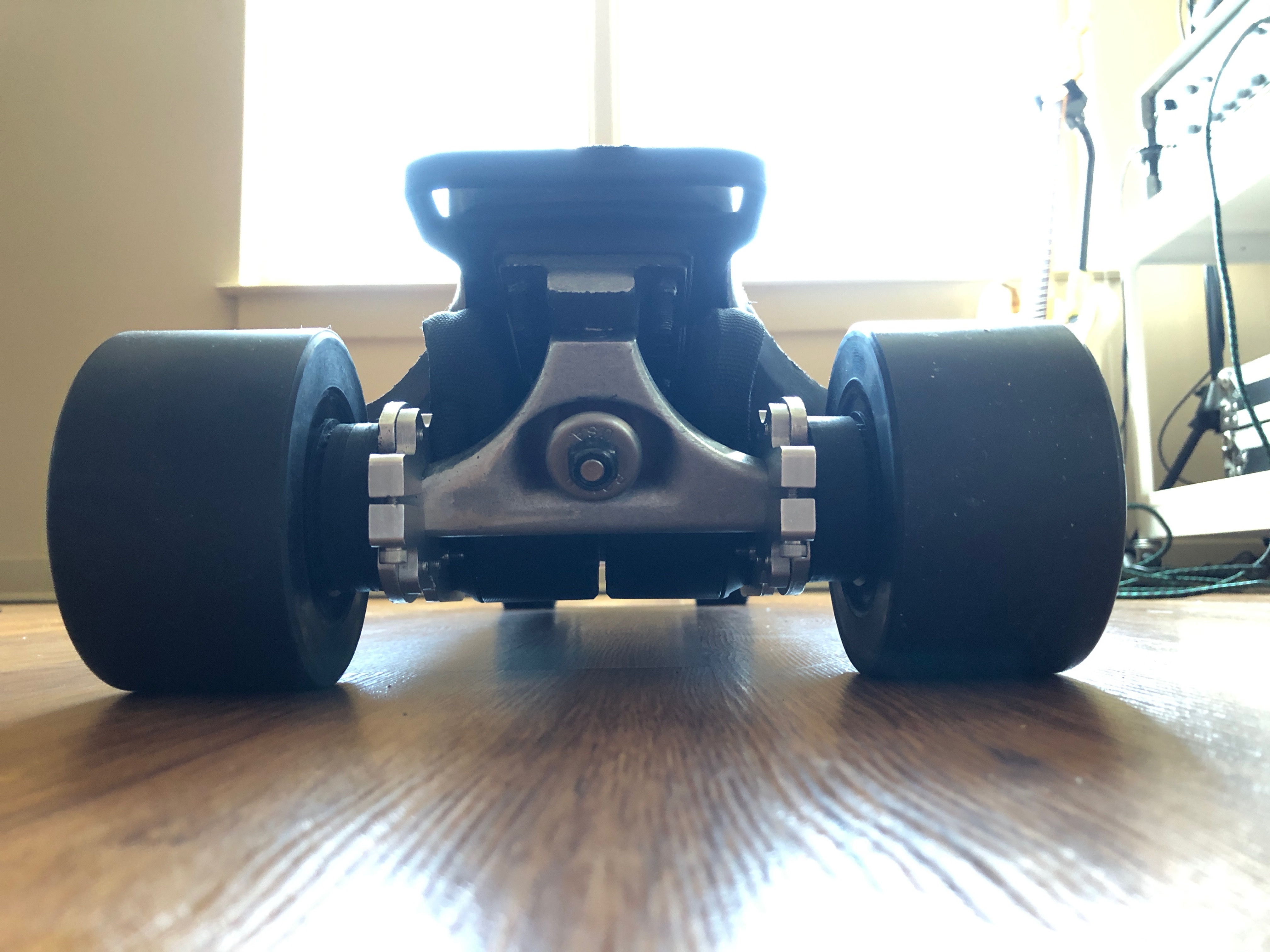 Some goals I had for the build were to run cast Ronins with very loose belts on 2:1 ratio, a completely screw-less quick access enclosure, a top mounted foot-switch, and a way to see if the board was powered on without flipping it over.

I commissioned the cast Ronin mounts from @marcmt88. His product and service were excellent, so when he started offering delrin pulleys, a bit later, I jumped on some 30t wheel pulleys and 15t motor pulleys, to get my 2:1, 4x4 ratio. I chopped off the boardside corners of each mount, to get more lean before the motors collided with the board or enclosure. I didn’t want very tall risers, but I do use a 5 degree, quarter inch soft wedge, at both ends. 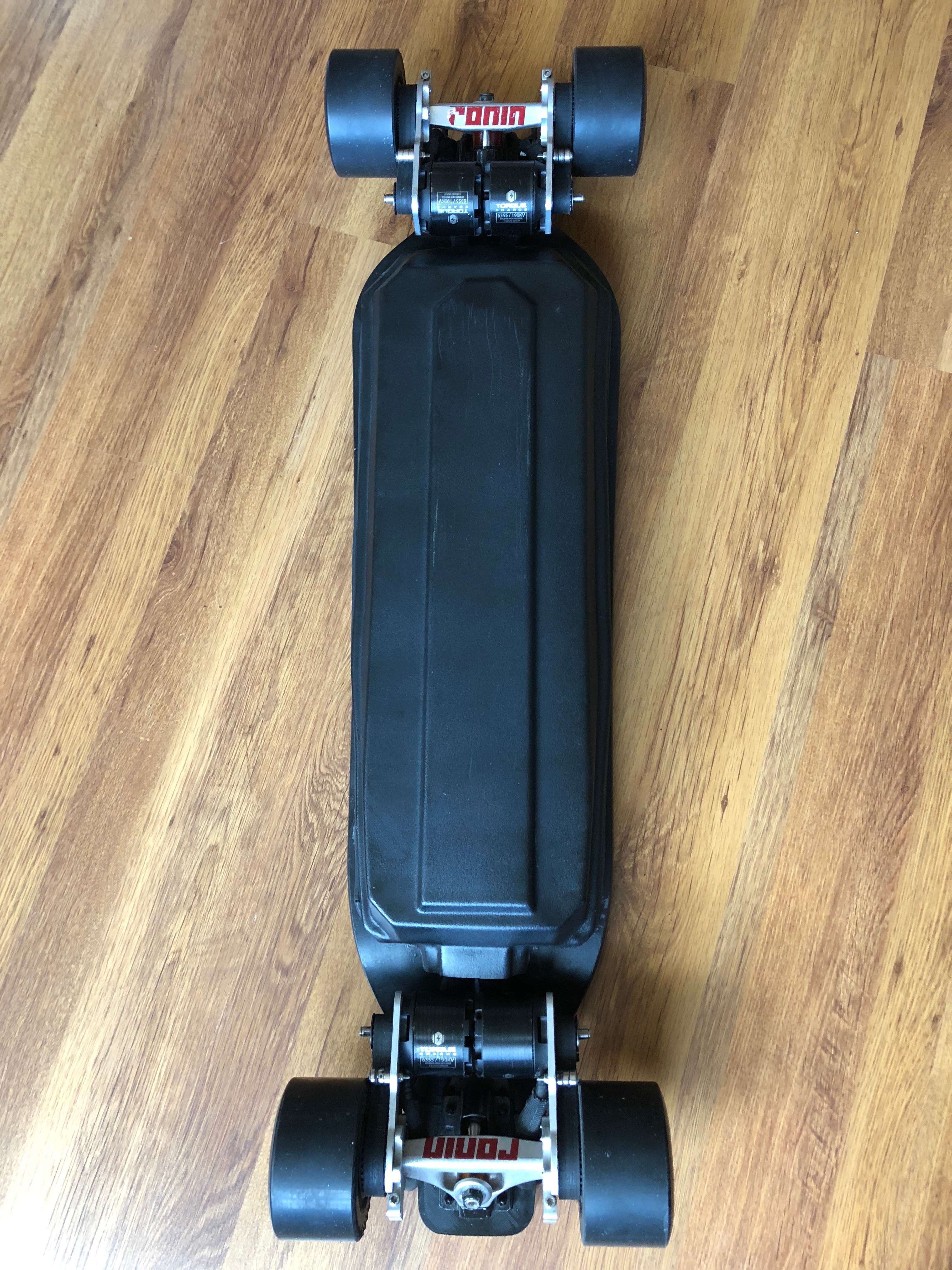 The quick access enclosure is made from a @psychotiller Evo enclosure and about 40 neodymium bar magnets mounted to the deck and enclosure. Pyscho’s enclosure is meant to be screwed down, to apply sealing pressure at the flanges. Since I wasn’t going to be using screws, I had to do pretty significant heat molding and hand forming of the enclosure, with clamps, heat gun, and gloves. This yielded a smaller gap for the magnets to attract. All of the component weight is velcro strapped to the board. 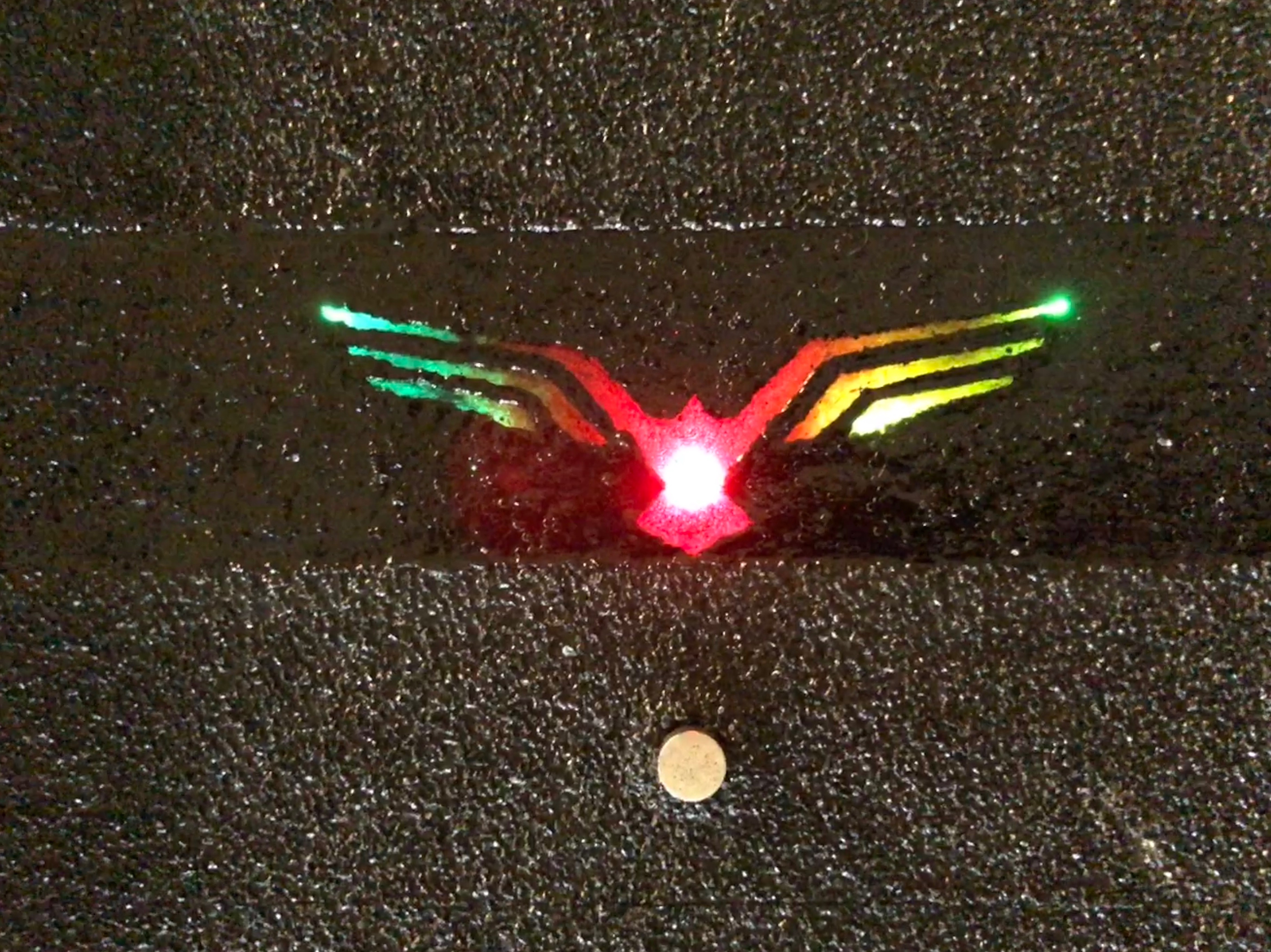 I bored a hole through the top of the deck and installed an SPDT latching foot-switch, like I’d seen on guitar effects pedals, then placed a rubber gasket and gripped over it all.

My crowning achievement was the LED backlit condor logo, which I made by routing out a shallow slice of the deck to fill in with alcohol paint and clear epoxy resin. I planned to have someone laser cut some vicious tape for a layover, in the shape of the bird, but I never found that someone. I just masked it off and painted; added glitter for texture. The backlighting comes from a 6 bulb LED harness that I fabbed and placed through drilled holes on the bottom of the deck. They draw power from an empty channel on my receiver splitter. 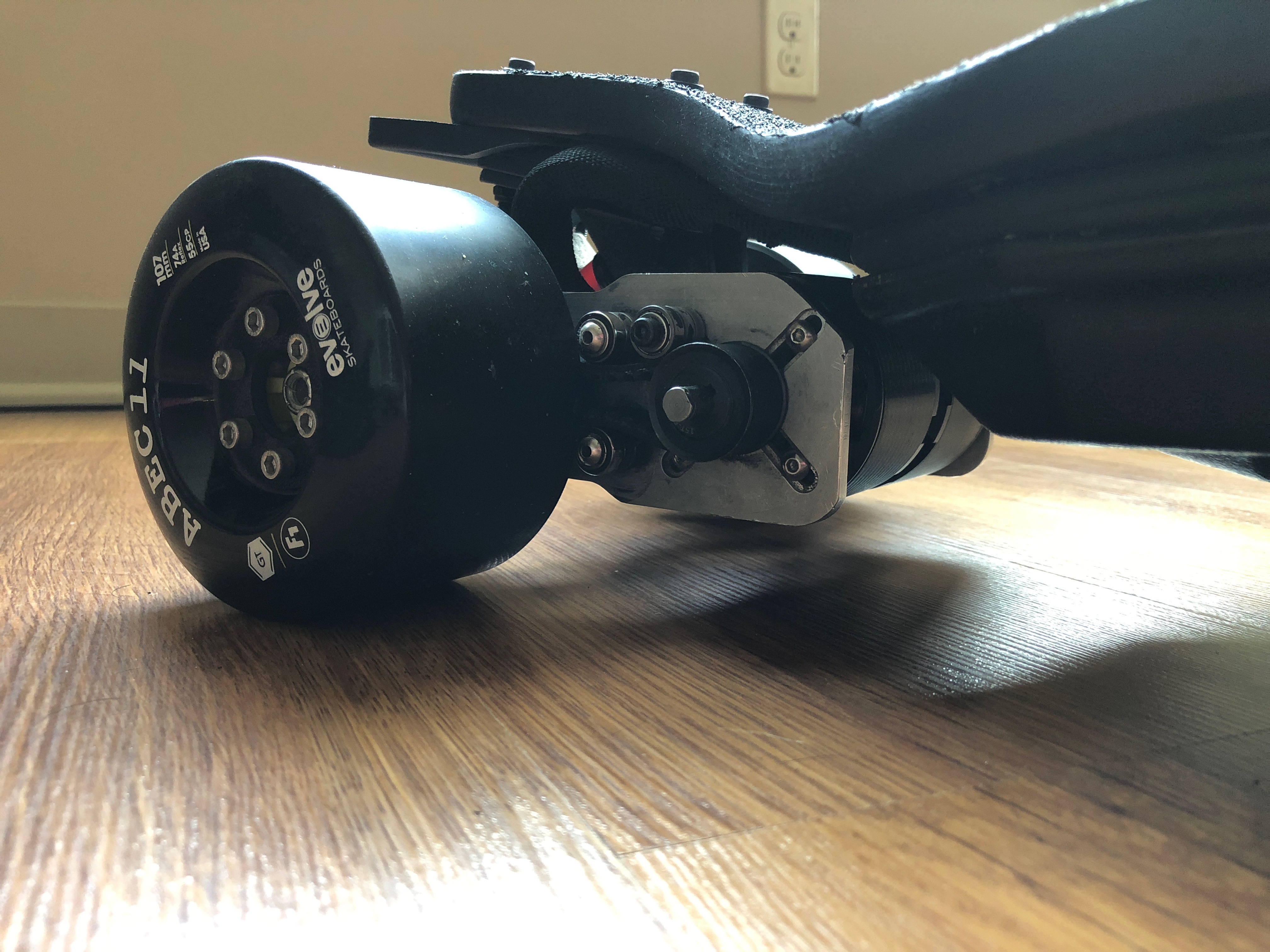 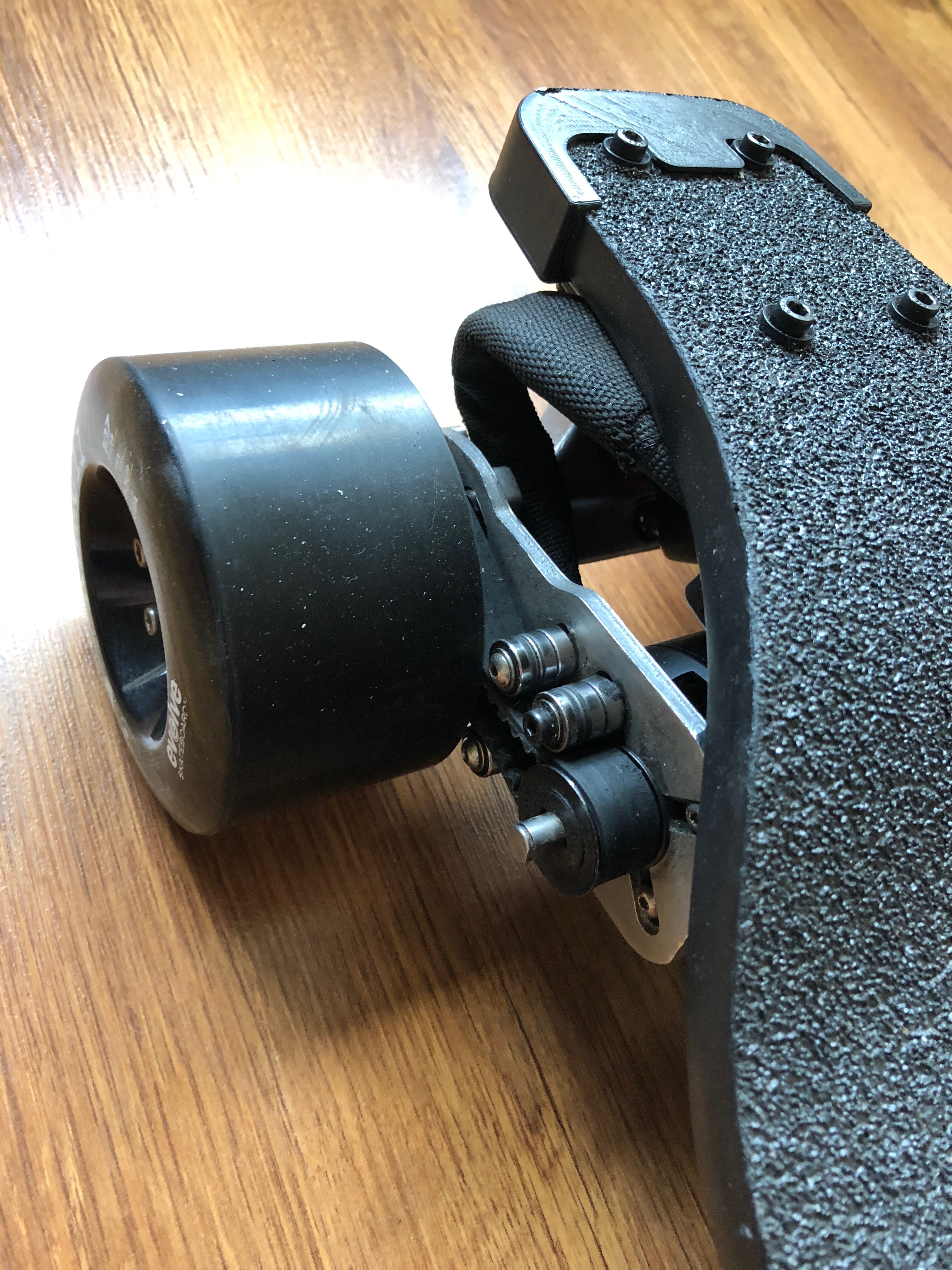 You might see the 3 idlers, per arm, and think that is ridiculous, but I tried a lot of different things and landed there, by accident. It’s pretty great. My free rolling is better than it was on hubs. Maybe better than other belt drives; dunno I’ve never stood on another one. It’s certainly better than a 4WD on 15mm belts should be. Marc’s original mounts shipped with standard skate sized idler bearings. For some reason, those would always eventually start to tilt and cause me alignment issues. I read the entire “obsessed with idler bearings” thread and came across @deckoz post about mounting smaller bearings in the motor bolt holes. Gave that a try, and because my wheel pulleys are so small, it just shifted the tooth skipping from the motor pulley, back to the 30t wheel pulleys. I had a bunch of these small bearings, so I decided to put them in the idler holes on Marc’s mounts, in addition to the motor bolt holes. It was magic. Super loose belt that doesn’t skip at the motor or the wheel. It works great for this 15t/30t setup. 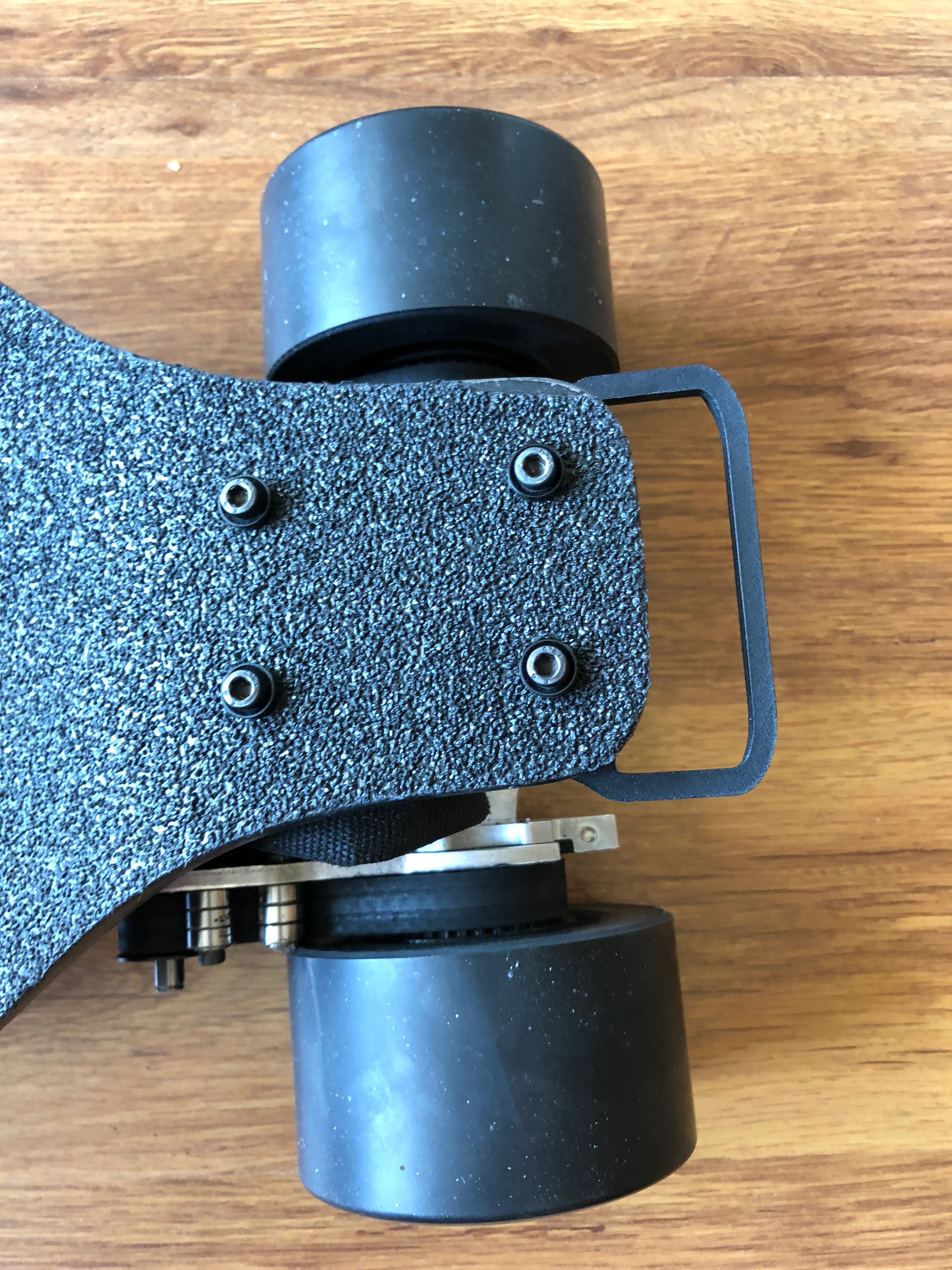 I used to want a performance commuter board that I could carry. If you have just one board, and you’re doing this for fun, it’s better to just have a performance board long enough that you can pull. A handle comes in handy…

The thing you aren’t seeing much about is the battery for this build. I don’t know yet. I took it on two runs with an old super saggy 25r 10s3p and things were great, while they lasted. I didn’t even notice any sag at the moderate speeds I was running, with the four 6355 motors and 2:1 gear ratio. It just eventually stopped, both trips. I think the battery has some cells out of balance, and later I found the BMS shorted some leads, during charging. The battery and BMS was giving me the willies, so I pulled it off the board. I’m looking at 8ah Lipos and balance chargers, very closely. That or N.E.S.E. 30q. Probably will run it without a BMS. More to come… 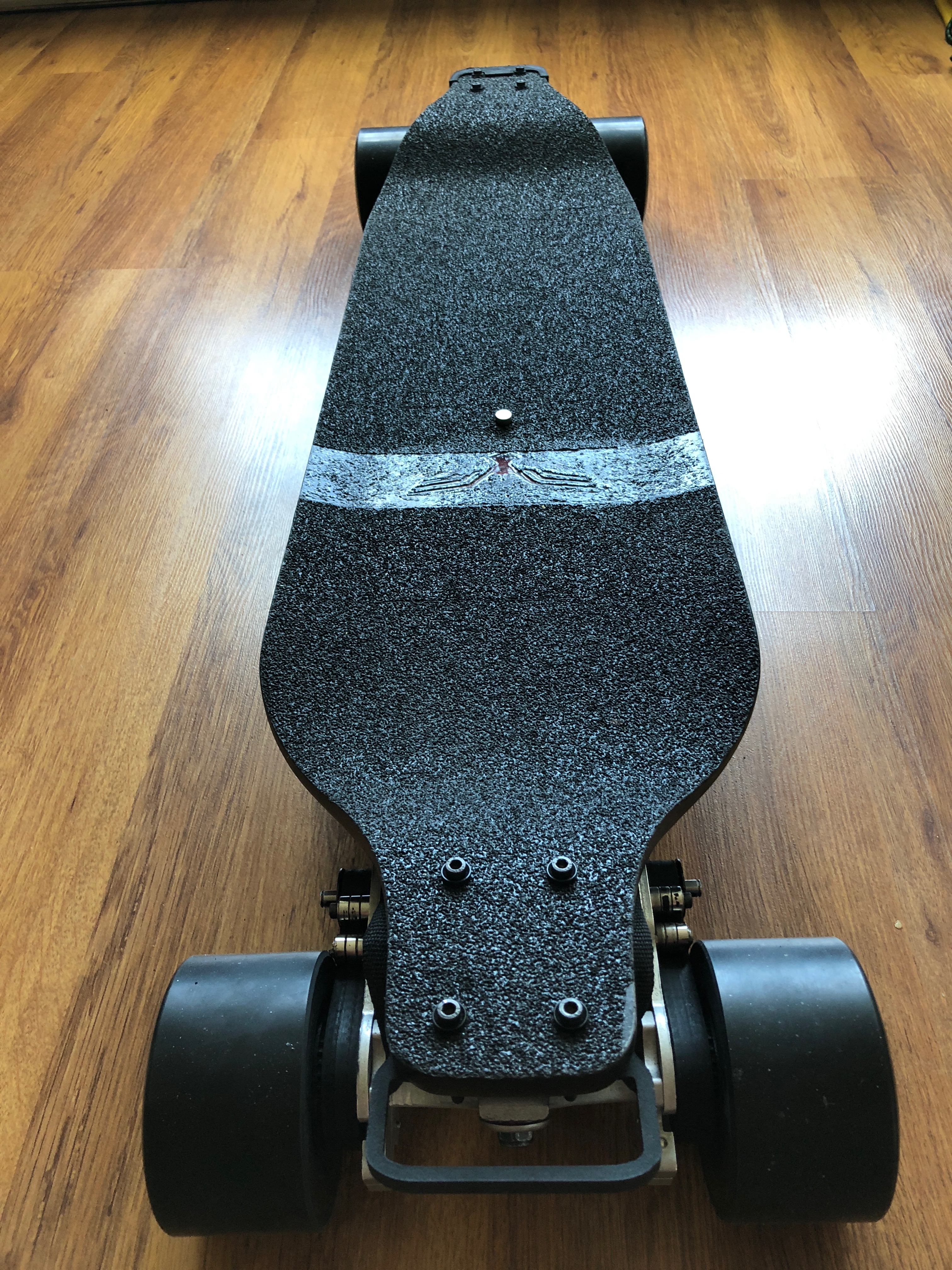 Fucking epic, I love it. Check out LANDYACHTZ EVO carry handle by Jhon_Takenaka on Shapeways and discover more 3D printed products in Other.

Very well thought out and put together.

Do you have more pics of the magnet setup? 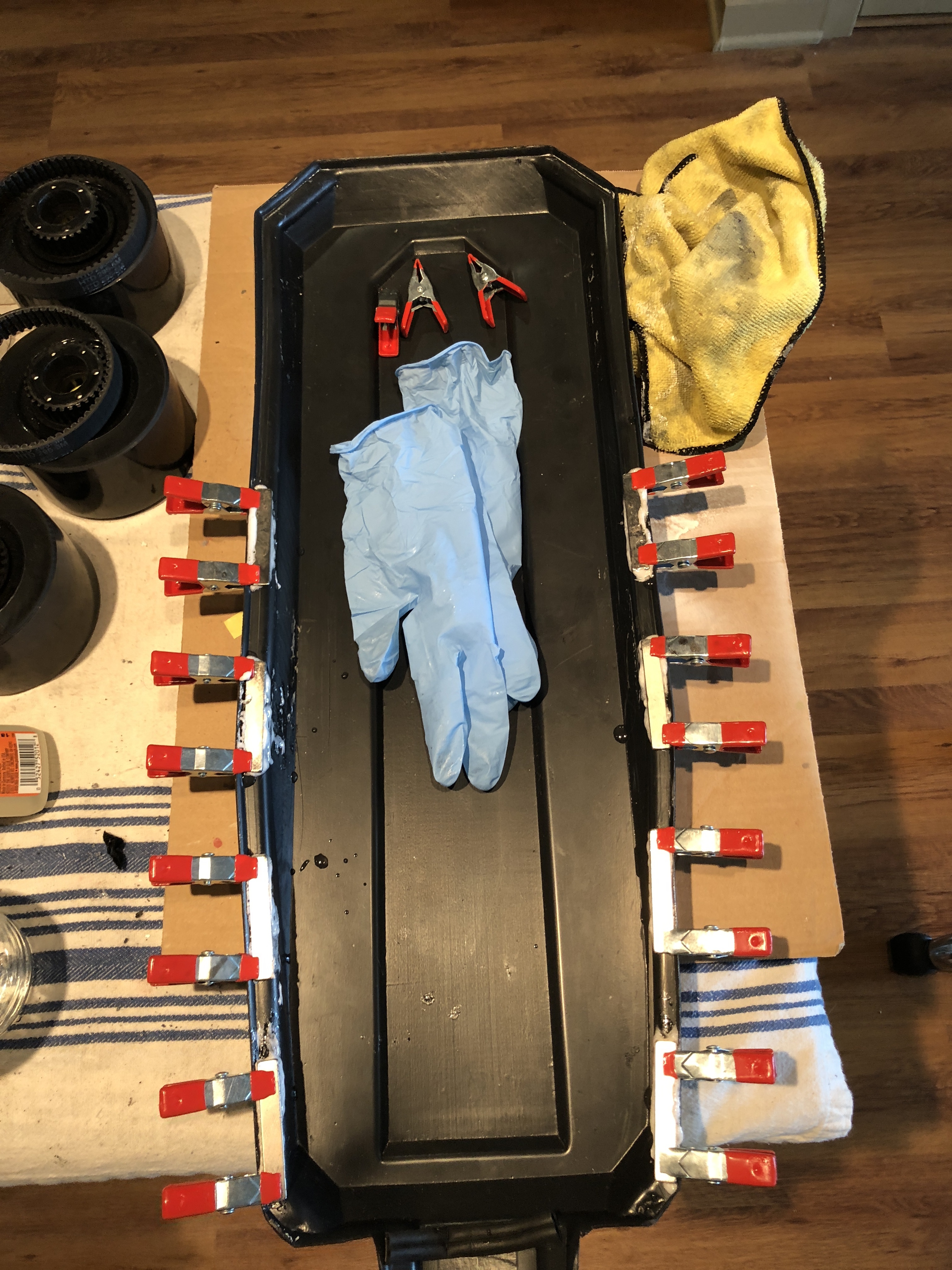 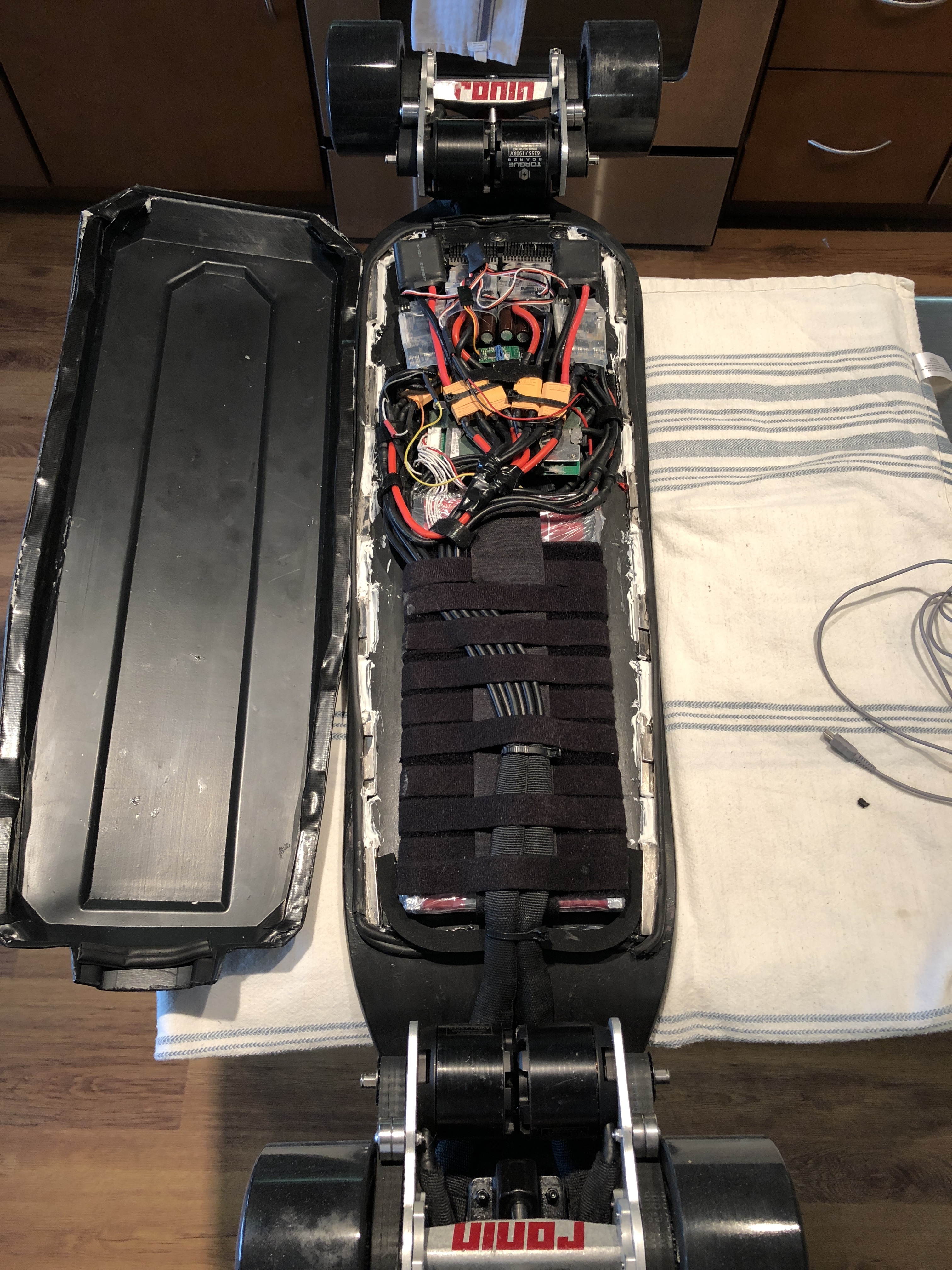 I glued a double stack to the deck to make that side stronger on the pull force. Single stack magnets fit well in the flanges of the enclosure. All magnets are glued down with gorilla glue (edit: board side magnets were actually initially lined up and held by double sided tape, then glued). I went over the enclosure side magnets with duct tape as a buffer to keep the magnets from breaking when they collide, and as another adhesive fortification for pulling the enclosure off. I did break some of the board side magnets during assembly. They fly together if you aren’t really careful. Still work though. I went around the magnet perimeter with an auto gasket seal and filled in gaps with silicone. I have some ideas for refining this and making it neater, is why I didn’t post it up above, but I’ll probably run it as is for awhile.

Bloody fantastic that! Love that design on the deck. Be good to some deets on that man

I routed an approximately 5mm, rectangular, cavity from the deck, then drilled holes through it, to accept the LED bulbs. Next thing, was to use self-leveling clear epoxy resin and alcohol paint to fill that in with color. It was my first time messing with any of this stuff. I could do more interesting things with the color, if I did it again. 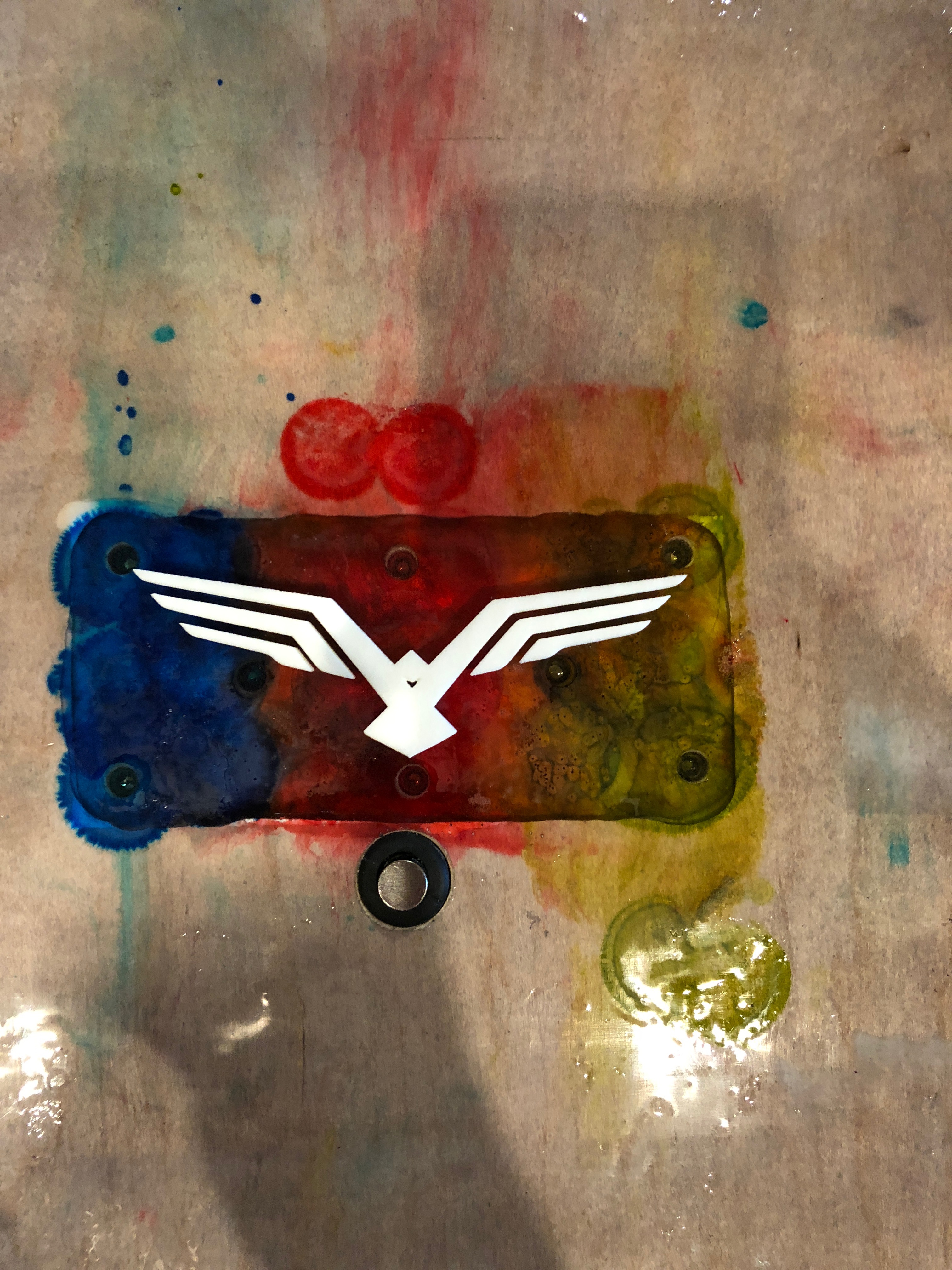 I fabbed an LED harness with 9 bulbs, but I’m pretty sure in the end I only installed six of them. These are inserted through the holes at the bottom of the deck. 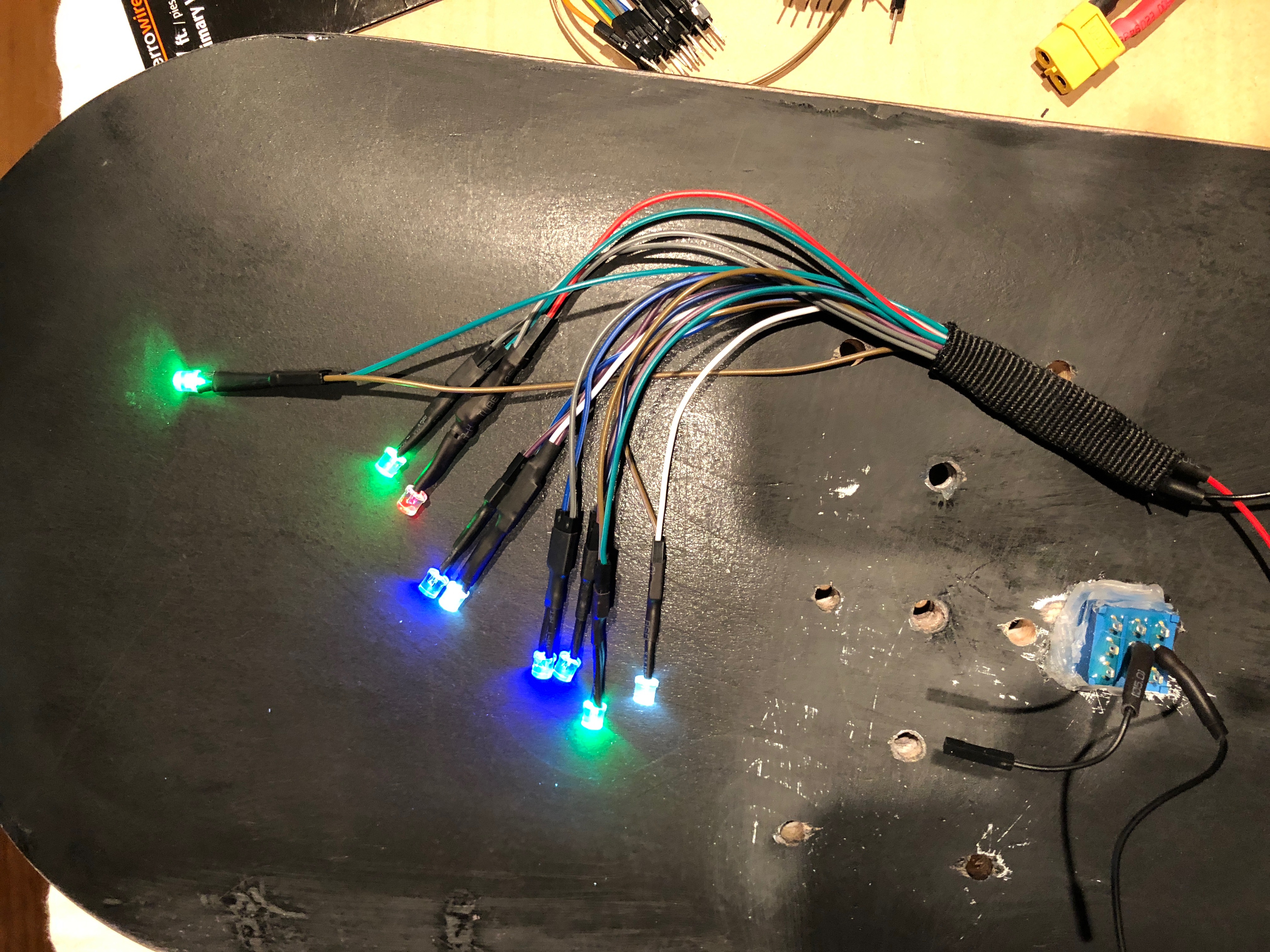 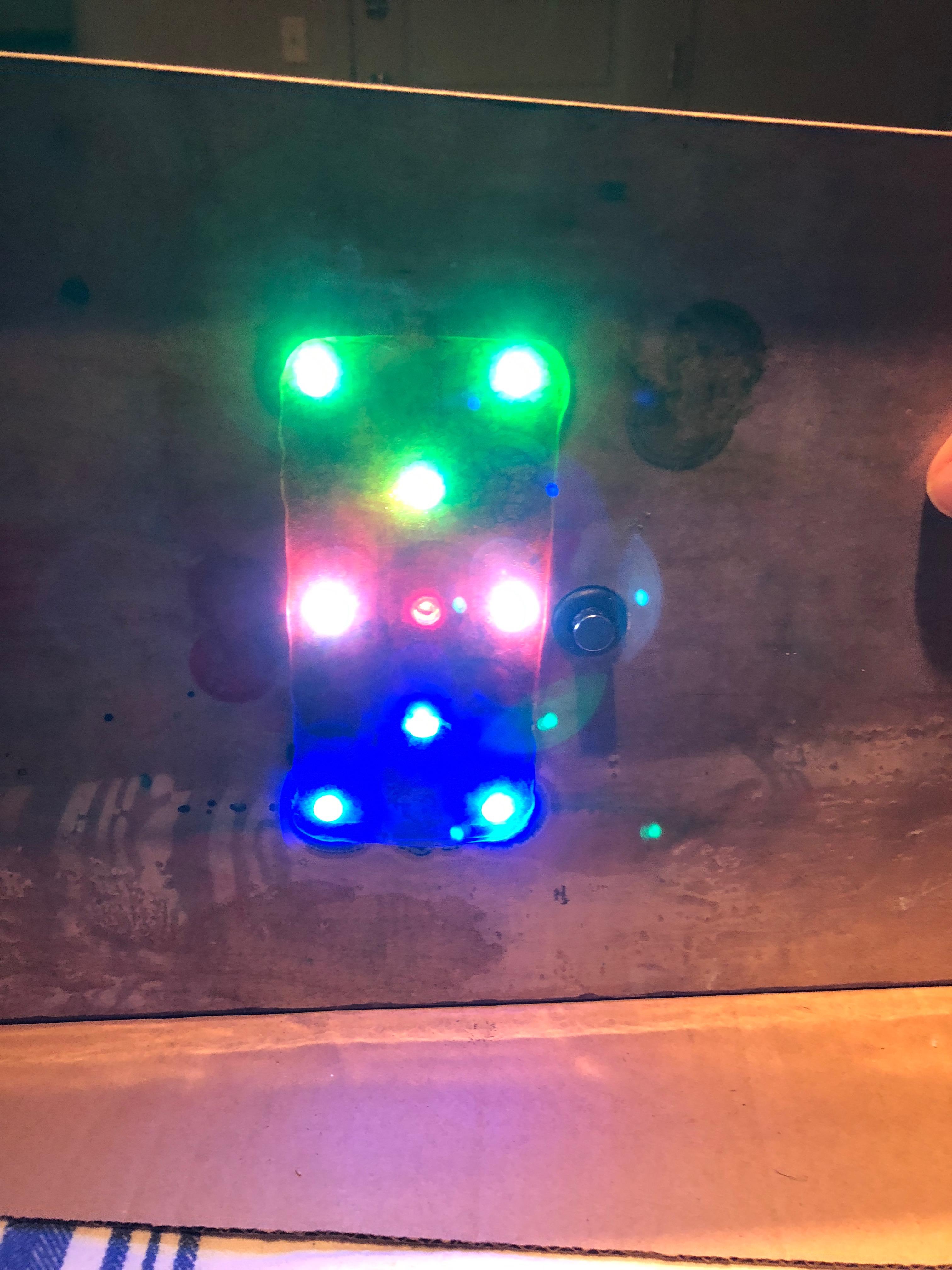 Placed the 3D Printed stencil of the bird logo, then painted over it. 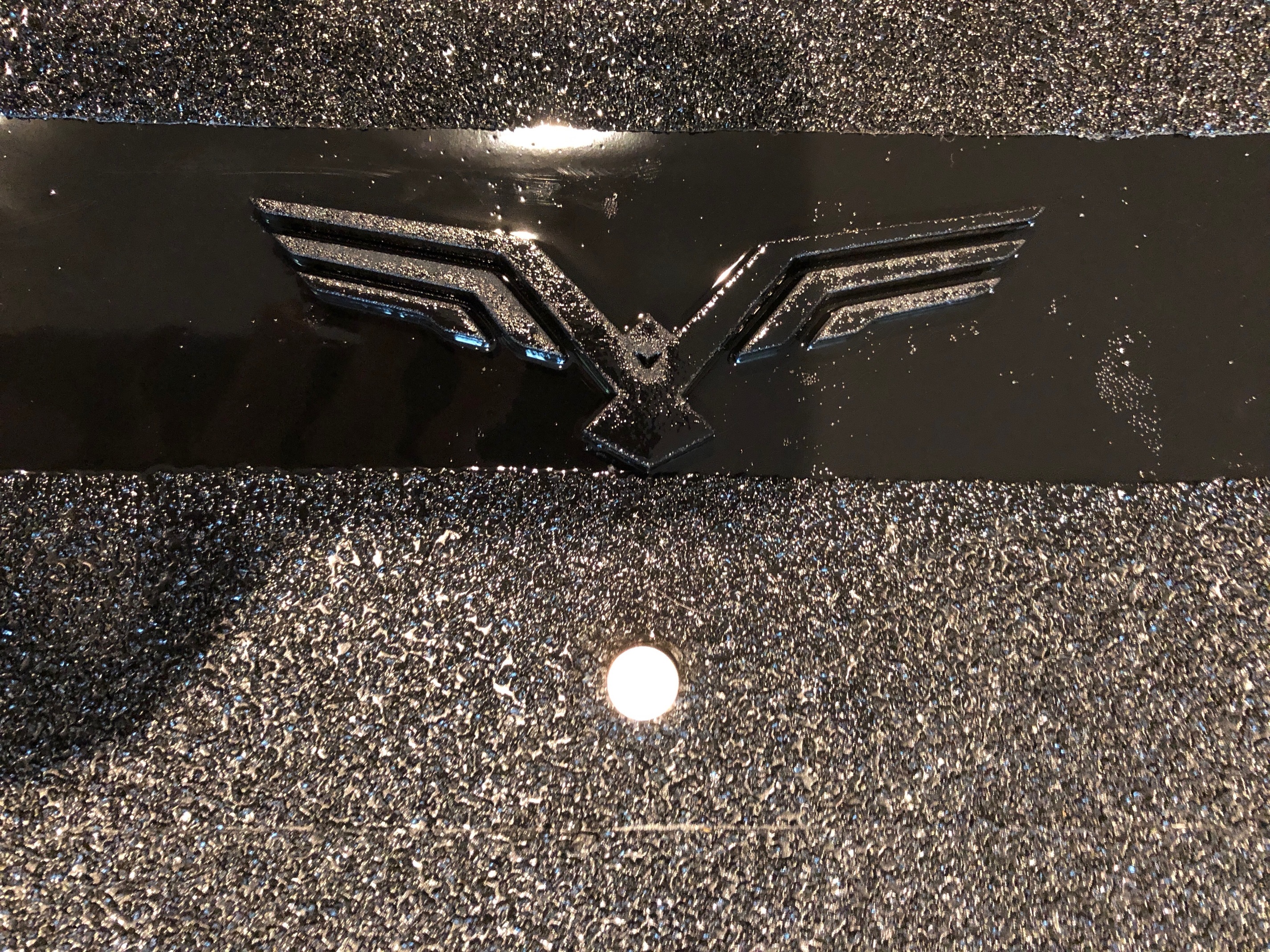 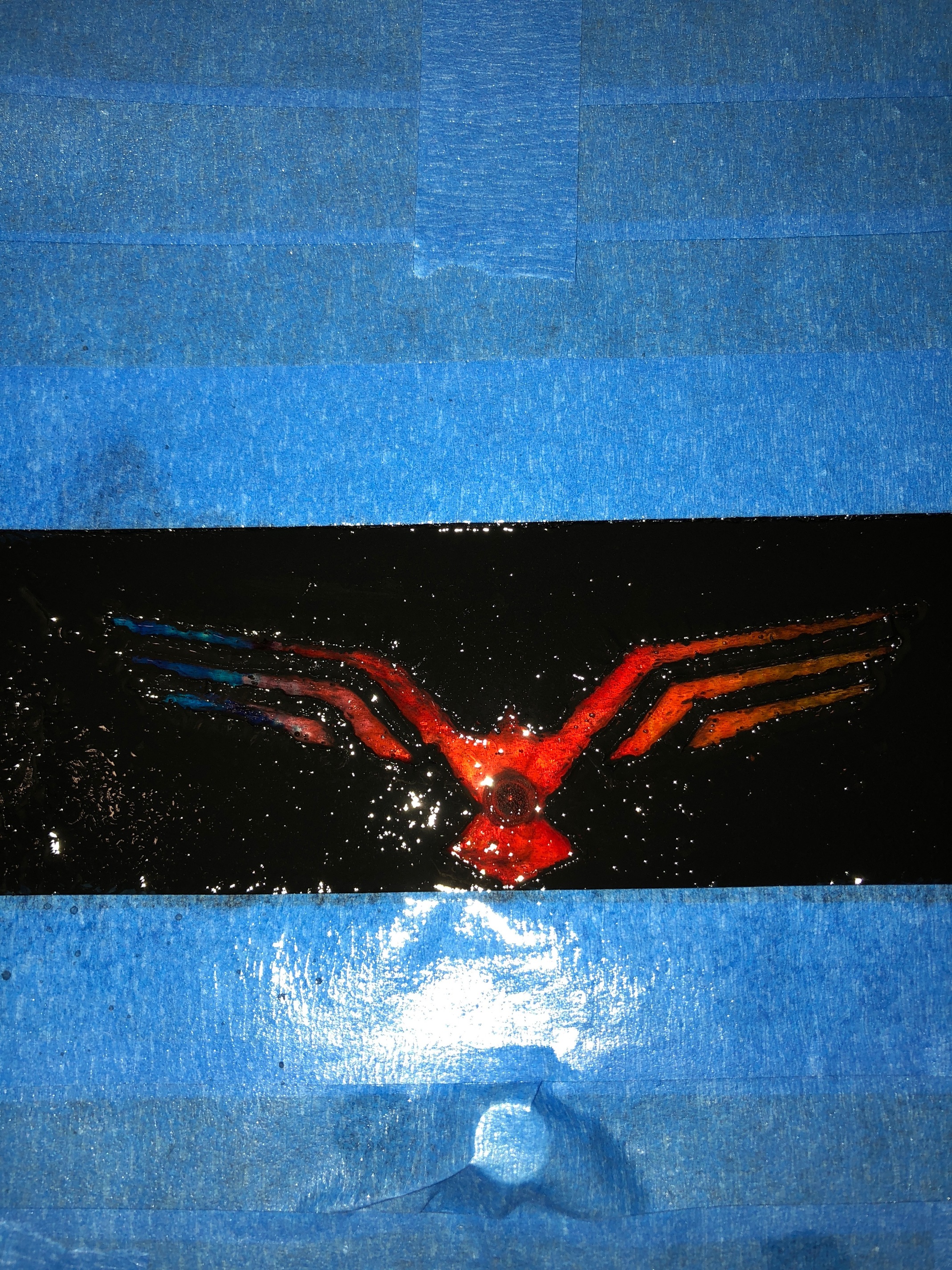 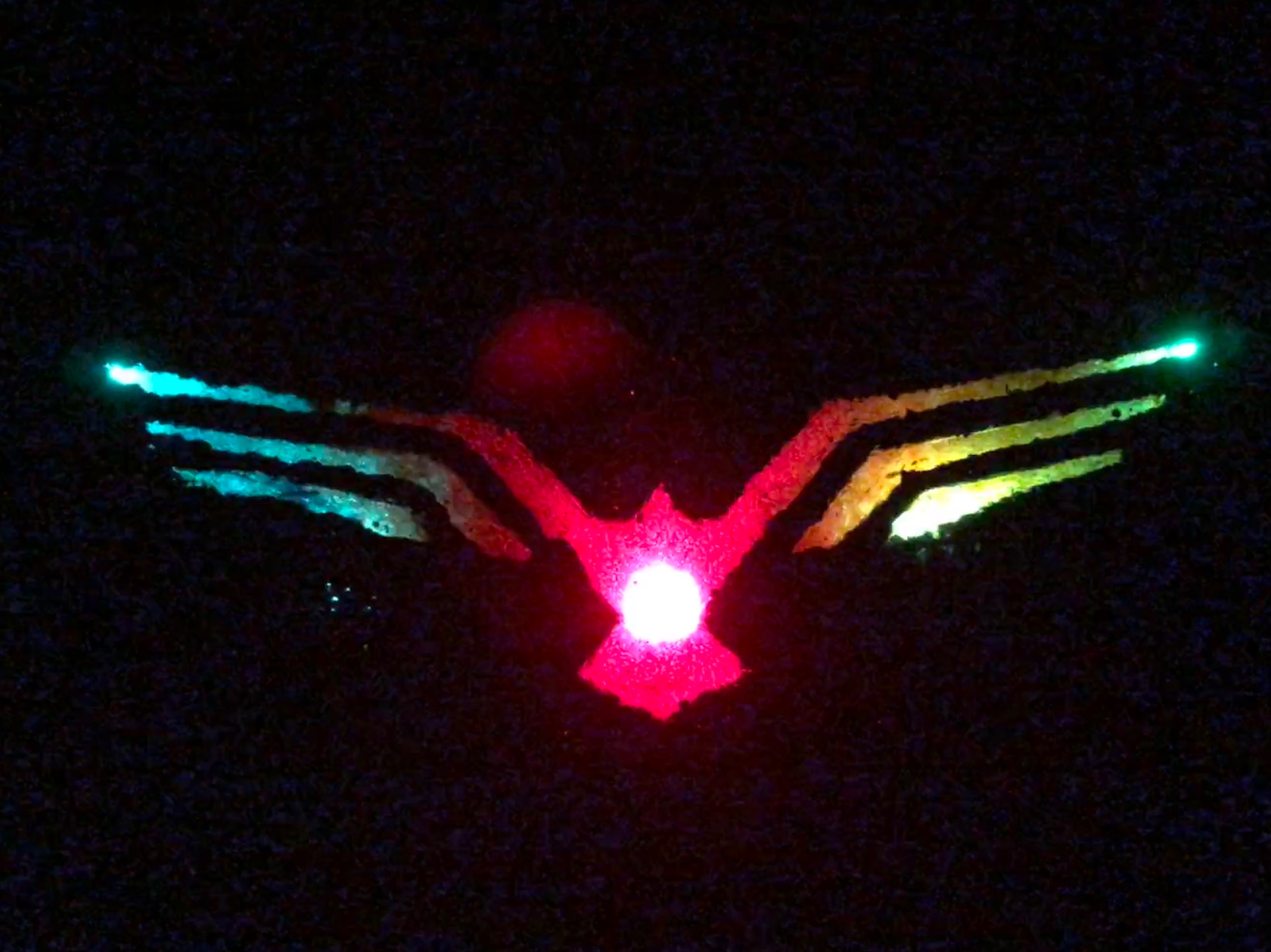 There is black glitter sprinkled between coats of paint, to get that texture, similar to the grip tape. I went over it all with a couple poly lacquer coats, for protection.

Awesome build! I ordered the same ronin mounts from @marcmt88 and I’m having a hell of a time getting them to fit with enough room for a 12mm wheel pulley…can barely get the wheel nut on. How did you get them to fit with 15mm…did you grind the truck down?

Also, the big mounting screws on my mounts face the board, not the street. I’ve tried flipping them over and swapping them and they barely fit on the trucks. I wonder if I have a bad set.

Mine were literally the set he built the profile of those mounts on. I asked him if he could make a Ronin mount, and then he procured the Ronins and I bought the whole package from him, when it was done. So, maybe the variance between the hangars on those is really huge. Mine went on pretty well. I hammered them in pretty good, though.

For one thing, I am using a thinner nut, but I’d be surprised if you needed something like this with the 12mm wheel pulley. Maybe give them a try if you’re satisfied with the alignment you have now and you just need a few more threads to bite. 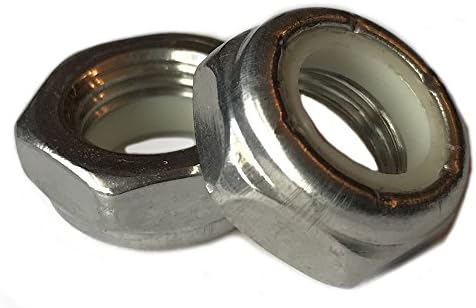 I just measured from the inside of both of the mounts, on my hangar, and the center distance is 4’’. What’s yours? Last thing; I didn’t realize that you could pull the axle on a Cronin too far to one side, if you don’t tighten each side incrementally. I thought I was going crazy until I had that epiphany. Maybe check that out.

The text will come right off those ABEC 11s with a little acetone. In case you are wondering.

Thanks. I’ll measure the center distance tomorrow. I can probably get them on but it will definitely require grinding down the hanger. I might try out that thinner nut though.

What size belt are you using?

This build is freaking awesome! Cant believe I missed it. I have always wanted to do a 4WD for better braking and redundancy, but its too expensive at the moment.

@wolffoxx I don’t know if this photo was taken during final install? I assume not because the axel through nut ratio here looks dangerous. Personally I like at least a couple threads past the end of the nut. 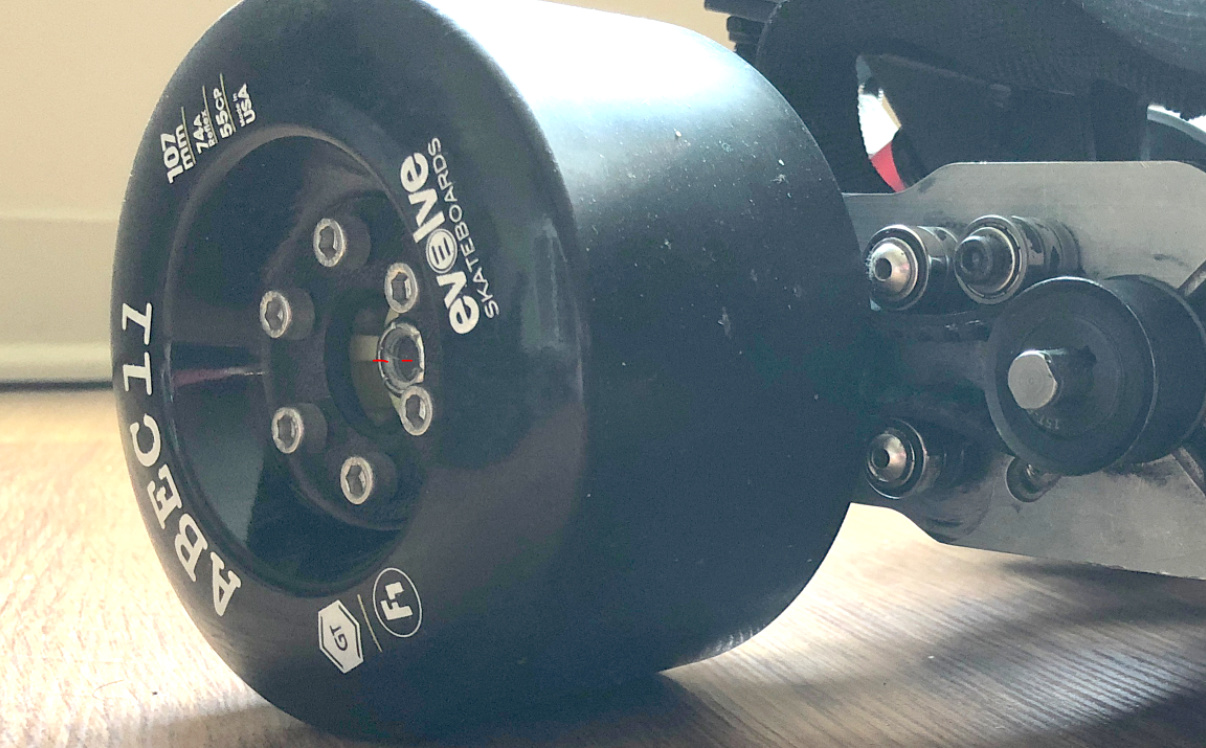 Thanks! Not sure if I had it ratcheted in as far as it can, in that pic. I was still setting it up that day, and that may have been before I switched to Zealous bearings with integrated spacers. Those bearings allow way more torque down than what I was using before them. Axle threads are definitely into the nylon part of that jam nut, nowadays. Torqued in very tightly, but there wouldnt be enough axle to expose any threads past the nut, without switching from the stock axle or downsizing pulley width.

Edit: Actually that was a day when I had cross threaded the nut so severely that I was waiting on an axle re-threading skate tool to arrive. The nut was barely on. It took me a while to discover that I could pull that axle off center, with too much torque to one side. That’s what you’re seeing. Better now, but not quite flush. Feels secure though.