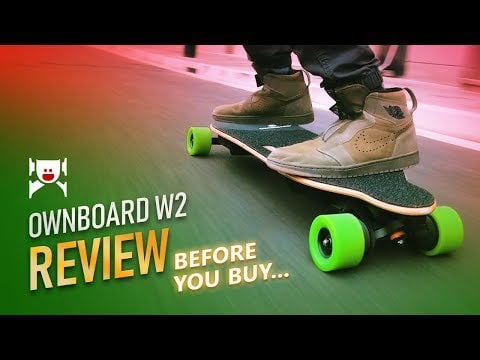 What we have here is the Ownboard W2 Review . Could this be the Boosted Board killer we’ve all been waiting for?

At a much lower price point, and still hosting some very impressive stats. It’s the first time we’ve seen a belt driven “budget board”.

With the Hobbywing ESC which we’ve seen on many boards like Wowgo and Backfire. It gives the board smooth acceleration and more control to the rider. Until now, all of them have been using Hubmotors. But it’s all changed now with the Ownboard W2.

Lets get into it. 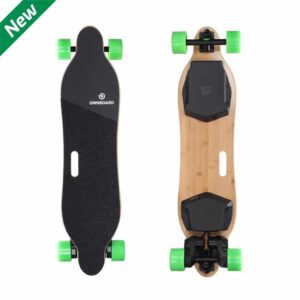 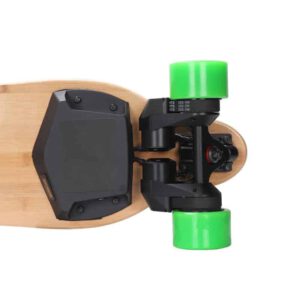 The motors of the Ownboard W2 are the most significant change when comparing it to the W1S. As you can tell by looking at the Electric Skateboard, It’s now belt driven.

Ownboard with the W2 has now moved away from the Hub motor driven boards which they have previously produced.

The advantages you have of a belt driven motor is not having the motor taking up space in the side of the wheel.

With hub motors, because they are concealed inside of the wheel and takes up a lot of space. As a result, the polyurethane is very thin.

By having thinner polyurethane, it compromises ride comfort and grip.

Ownboard has improved the top speed from the previous model.

Ok, it’s only improved by 1 mph, but still, that’s better than the W1S.

A majority of skateboard all hover around 25mph mark for their top speed.

The acceleration is slightly slower than other belt driven boards like the boosted. But as the top speed of the Ownboard is quicker, you quickly start catching the Boosted Board back up again.

Considering the price difference from the Ownboard W2 to the Boosted Stealth I think that’s more than a fair compromise.

The wheels that come with the ownboard W2 are 83mm.

One point I need to make here is at the moment you are unable to remove the pullies from the rear wheels.

Currently, Ownboard does not sell additional pulleys which means as it stands this makes it incredibly difficult to swap and change to different wheels.

This is a shame as that’s the one significant benefit of having a hub driven electric skateboard is being able to change to different sized or make of wheels quickly.

The wheels that ship with the own board W2 are excellent and for most people will be more than sufficient.

A lot of people are already accustomed to the smooth braking of the Hobbywing ESC.

And we find the same smooth braking with the W2.

The breaking isn’t as strong Compared to Boards like the Boosted Board. But that’s not in any way saying that the braking on the Ownboard W2 is bad.

The Ownboard W2 desk is made from 2-Layers bamboo + 6-Layers Maple wood, 38*9.05 inches, Flex designed. This is nowhere near as flexible as the deck you get with the Meepo NLSor the Boosted Boards.

Having flex will improve the ride in some respects, as it will iron out some of the bumps you run over on your usual trip.

But having more flex from the deck isn’t necessarily better, and it’s down to personal preference and riding style.

Ownboard has kept the hand cut out making it nice and easy to carry.

Also on inspection, it also has some shock exhausting grip tape. By having this, it does make it slightly easier to carry with the handle as the ridge is somewhat thicker and doesn’t put as much pressure on a specific point of your hand.

The remote for the W2 is nothing special at the moment. We’ve only seen the prototype version of the W2 board and the remote that will come with it, so the likelihood of there being a different remote when it ships is highly likely.

The one they are currently using is the one they’ve used on the W1S as you would expect.

If they do stick with this remote, it’s in no means a bad thing. It’s the same as the one I’ve extensively used with my Wowgo 2s.

It feels good in the hand and very intuitive to use and gives a lot of control over the board.

We see another advantage with the trucks due to the W2 having belt driven motors the back truck and be more similar to a normal longboard truck. These are slightly wider than rear truck you will find on the Electric Skateboards with hub driven motors.

They are standard trucks but this doesn’t mean they are lacking in this department compared to other Electric Skateboarding manufacturers.

If you wanted to swap the trucks out at any point it’s very easy to do so, and following any of the vast amounts instructional videos on youtube will help.

The range of the Ownboard W2 is right where you would expect it to be for a board of this price range.

They the Range will vary quite a bit depending on the type of Rider you are and your weight. If you’re getting anything above 10 miles in proficient mode. Then I would call that a pretty good range.

Ownboard Are rumored to also be releasing the W2 with a second battery option which will be the Samsung Q30 give you a 9.0Ah.

So if or someone using this board for a longer commute then it might be worth waiting for this auction to be released.

We haven’t got any details in terms of the total range of the 9.0Ah battery but I will update this section the second it’s released.

There aren’t any features like an easily swappable battery like the Meepo NLS. That’s in no way a deal breaker, as most people are well accustomed to not being able to swap electric skateboard batteries.

What’s In The Box

Ownboard was founded in 2013 when it was registered in Hong Kong, China, the and USA.

a fast accelerating growth quickly propelled the company into one of the best well-known electric skateboarding manufacturers.

over 6000 customers from all over the world Ownboard now have a sizeable following.

The slogan. “Super Quality, Satisfactory Service” Pushes own ball to try and be the best company for their customers as possible.

Conclusion Of The Ownboard W2 Review

Now we’ve reached the conclusion of the Ownboard W2 review I will quickly sum up all the good and bad points featuring the board.

the biggest talking point is easily the belt driven Motors we now see on the W2. many people say what’s the big news as we’ve seen it many times with the boosted board evolve and slick Revolution all having belt driven Motors.

The main difference is the price.

All the boards I have listed above are significantly more expensive than the Ownboard W2.

This is probably the wrong forum for this.

We build boards that would crush this thing in every way that matters.

Lol @sami @Indiangummy I swear we just talked about thjs in the other yhread. BOOSTED KILLER

Since this is posted in the Electronics section

What are peoples thoughts on the ESC for this one ? Is there potential to re purpose it for budget builds ?

The old hub motor one Use Customized Hobbywing ESC.The most stable ESC for commute electric skateboard, Max discharge rate is 24A.

This belt drive one The W2 ESC use Customized Hobbywing ESC with sensor. Which is still smooth like the ownboard other boards. But have faster startup speed and More powerful climbing. Big discharge current upto 40A, it will keep you always strong, even when you are climbing.

If they sell the 10s3p enclosure and 30q battery separately it would make for a great budget to mid level board for diy.

Do you like the ownboard W2 Belt motor kit?

Belt motor How many people want our to provide the belt motor kit?

Could this be the Boosted Board killer we’ve all been waiting for?

i wasn’t and probably will never wait for it

While it might just be “another boosted clone” what this does differently is really in the motor side trucks. They cloned boosted’s best feature, the auto tension for the belt. Now his video notes the springs are a bit too tight, but that’s an easy fix. Hopefully this will end the days of the cheap non-adjustable pot metal trucks as seen on boards like the riptide and sold by vendors-who-have-been-banned.

Sadly there is no Asian trucks/drive train that I trust. They simply don’t care about safety, the least investment and the most profit is what always counts. Except Raptor 2.1. they do care about QC Edit: forgot to add to trusted seller Haggyboard @riverside.rider

thats a pretty big blanket statement to make. one example off the top of my head haggyboard is from taiwan. I would considered that asia too. I been to his workshop and i seen the boxes of goods that failed QC and the list of manufacturer that didn’t make the cut. Lots of companies manufacture in china. There are other vendors that are targeting mid market and aren’t just optimizing for price. This broad stroke statement really isn’t fair imho

hmm they look just like diyeboard trucks - they snap

I love how the OP copied my sarcastic title from Reddit. Jokes aside I think this will be a good Boosted-like alternative. Sell it as a kit and throw it on a real vanguard

I’m still trying to understand why and how the OP went from shilling stormesk8 garbage to promoting Ownboard W2.