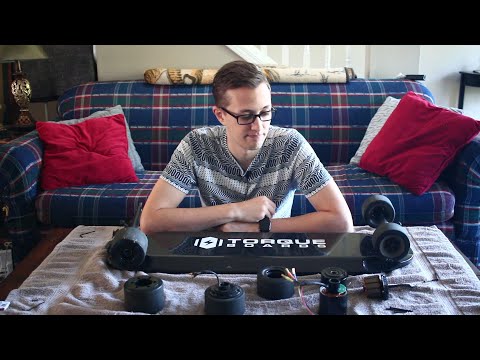 After three and a half years, the nightmare is finally over…

As someone who only started buying stuff from there in the time after all of these products were discontinued, I was aware that the quality of previous stuff had been lower than when I was shopping, but this doesn’t really make me not consider the current offerings.

By the way you talk about TB in the video I don’t think you have followed the recent product releases that have been really killer on performance and quality for the most part.

Sucks that you ordered at seemingly the worst time for dexter’s products, just doesn’t sound like you have a completely educated idea about the current stuff.

At least you didn’t order a raptor!

that shit you got was terrible and it is sad that dexter even tried to get it work for people.

Wish ya could have got it working in whatever way quickly but not with those crappy hubs.

You paid an early adopter tax for sure, and I’m benefiting from it, so thank you for your sacrifice.

Hey, I appreciate that perspective. You’re right that I don’t know much about the current quality of their products, but what this does speak to is how they will/won’t stand behind what they produce down the line.

I should have demanded a refund much sooner. I was far too willing to look past all the issues with the board because I felt like Dexter would eventually make it right. He seemed like a good dude who was just as into the hobby as me. It just didn’t turn out that way.

Vendors will make mistakes. They are proven by their ability to own up to them and make things right. He didn’t and won’t do that.

So yeah, maybe their stuff is great now, but whatever they have done in the last couple of years was built on the backs of people like me who got f’d over. I can’t see how there’s any argument to support a business like that.

There is an entire forum created because people got screwed over on this forum.

Dexter is like the complete opposite from “super shady”. For the record, Torqueboards is a good company providing good products. I use many of their products, though not this one, and am very happy.

A simple google search will tell you otherwise… While many of us in the community have had good experiences, many others have not. It should be very clear, his customer service record is actually poor for a seller so readily endorsed by the community. He readily downplays and deny issues being documented well by customers. His shipping is god awful, pre-pandemic as well, other than wheels and motors, nothing is ever marked as back order or oos yet stuff takes weeks to ship, presumably because it is actually out of stock not that he just doesn’t care to ship in a timely manner.

There’s even multiple threads on this on the better forum. IMO we should expect a lot better from sellers especially those based in the US deeply involved in the community.

His shipping is god awfu

I have never experienced this, always about a week, consistently since 2016.

Like I said in the video, I don’t doubt that there are plenty of things you can order from his site that will work just fine.

right but some portion of that was after you refused the free belt drive system, if it was one of the earlier ones you prob would have killed a magnet at some point and then you would have to buy new ones.

Just to be clear, I never refused the belt drive system. When he offered that my response was “I’ll think about it and get back to you.”

I then said “If I were to go with the direct drive kit… what would the timing be like? Would I be waiting long before I got it?”

His response was “As soon as everyone else gets it. Eta is around feb 2019.”

That would have been another three month wait.

That’s cool bro. Like I said some people get stuff quickly and properly other’s don’t. Ive never had an order ship in under a month from him much less arrive that fast. But disregarding myself let’s look for other examples:

Example 5 and entire thread on the news forum about shitty CS, notable of how recently it’s gotten worse.

Example 6 news thread about TB motor mounts bending, Dexter denying responsibility shifting blame to the user about not using crossbars, evidence of mounts bending even with crossbar posted, all of a sudden Dexter changes his tune.

Example 7 Shipping issue that he joined the forum just to get sorted because TB wouldn’t answer his emails.

I can probably find more, but don’t feel like wasting the time, this was just a quick search and I only picked posts within the last 6 months. I’m by no means trying to say TB should be cast out from the community. I want to see the company succeed because it will absolutely benefit us all. I just think we’re giving him way to much credit because he’s done a few good things when there’s plenty of evidence of other issues. I’ve had multiple people tell me they have parts ship and arrive from china faster than TB. He needs to do better.

Hey I’ll buy the deck off you? Yeah pre-builts were hit and miss in those days. I blew up these hubs as well now I know what happened very helpful.

Dexter always told me I was the only one who ever had any of these problems. I wonder if no one else reported them or if he was just flat out lying.

Ha I was gonna offer to buy it too.

Dexter is a huge scam artist. I bought the AT wheel kit and every single rim is warped and I’m sure he knowingly put them on special to liquidate them and when i asked to get replacement rims all he would right me was ship them back for a refund. Yet the way I found out they were all warped was from trying them and my board vibrated so badly it wasn’t even rideable. He then has the nerve to say send them back new and not used for a full refund. I hope no one ever orders anything from that scam artist!