Hey everyone. Want to get some feedback and suggestions on an e-sk8 i’m giving to one of my best friends.

I have a old school 33x10 kick tail deck i will be using for his build: 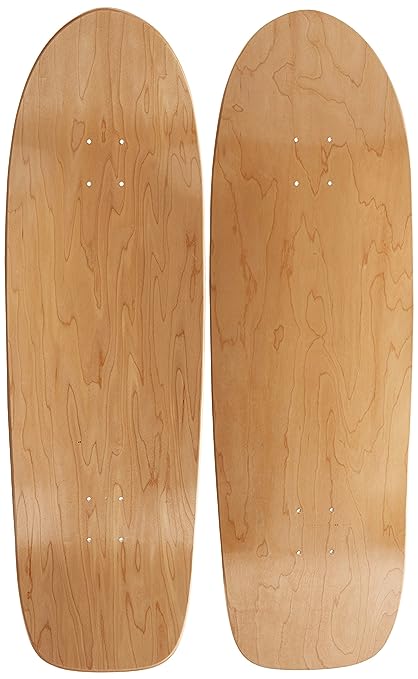 418×679
I got him skateboarding/longboarding a few years ago when he moved to Oceanside from Seattle. He’s been skating when his daughters ride their bikes around his neighborhood.

I want to get him setup w/ a decent starter board. I have the following components to use:

I’m curious on ESC and motor mainly, since i have the deck - a large part will depend what fits.

I have a spare VESC i initially thought to use, but then remembered i have an XERUN (150 i believe) and Mamba XL2. I’m sure the VESC (4.7hw 1.13fw iirc) will work fine on 6/8s, but also know it can be easy to kill the DRV with some inadvertent misuse. So thought the XERUN or Mamba might be good alternatives. I’d need to check what config you all use since i never got either one setup correctly when testing… after i got my first VESC they’ve sat in a box.

How would you set this up for your buddy? If you suggest the XERUN (similar to FVT and EZRUN) or Mamba - do you have any configuration settings to suggest?

I get down to see him and his family usually 1-2x a year. When he first moved to Oceanside, his college roommate (how i met him) and i got him his first surfboard. I then went down and did a surf camp w/ him (Surf Divas in La Jolla - it was hilarious and awesome being only 2 guys there). I surf infrequently/poorly (from Santa Cruz as kid) and learned/relearned a lot, and best thing ever to do with a bud - laugh at yourself and learn w/ cute girl instructors! So we got him his first and a spare board for guests (Degree 33 - 9’6" and 10’ boards).

So now if i can get him hooked on e-sk8 i know we can get at least 2 e-boards for riding when visiting too!

-We will be working together to make a custom deck that will house a few of the electronics, an ABS enclosure for everything else

he’s been skating for a few years already and is pretty athletic. Just looking to give him something nimble and motorized.

But i hear you - i’ll look at other candidates in my garage and see if something looks better.

@sl33py agree with @Michaelinvegas a longer deck with a wider wheelbase to start off in ESK8 is a good option especially if your thinking of 90mm. In my opinion, cruiser decks below 34" should have at least a 20" wheelbase when riding on 90mm for safety and comfort. And I’m a lightweight!

Mamba monster and xl2’s are definitely my go to for reliability and power.

Vesc will have quiet braking (my biggest annoyance with the rc car escs) but for a 6s or 8s build you can beat the castle creations escs.

They also have a USB computer program similar to the black tool with things like power curve, motor timing, throttle tuning, etc.

@sl33py You could always drill some new holes toward the nose to lengthen the wheel base. I did that on my old 90’s Santa Cruz kick tail, and increased the wheelbase from 15" to seeing 19.5". Honestly, I don’t think I’d want to ride a board with any shorter wheelbase unless I’m going really slow.

I’d go 6s with the Tacon to keep it simple, and gear it to suit the top speed your friend wants.

This is exactly what i’m thinking of doing. It’s a cool little deck - nice and wide w/ tail and nose kick. I can move the rear back 1/2-3/4", and the front i’m thinking i’ll place on the angle of the front kick. Possibly w/ a de-wedge riser.

He’s not as big as me, but a taller guy so i think from my standing on it that it will work perfect. The front and back kicks are comfortable foot placement for me an definitely makes my feet feel locked in. I like that brace feel of a drop deck too - foot placement lets you brace for acceleration and braking. 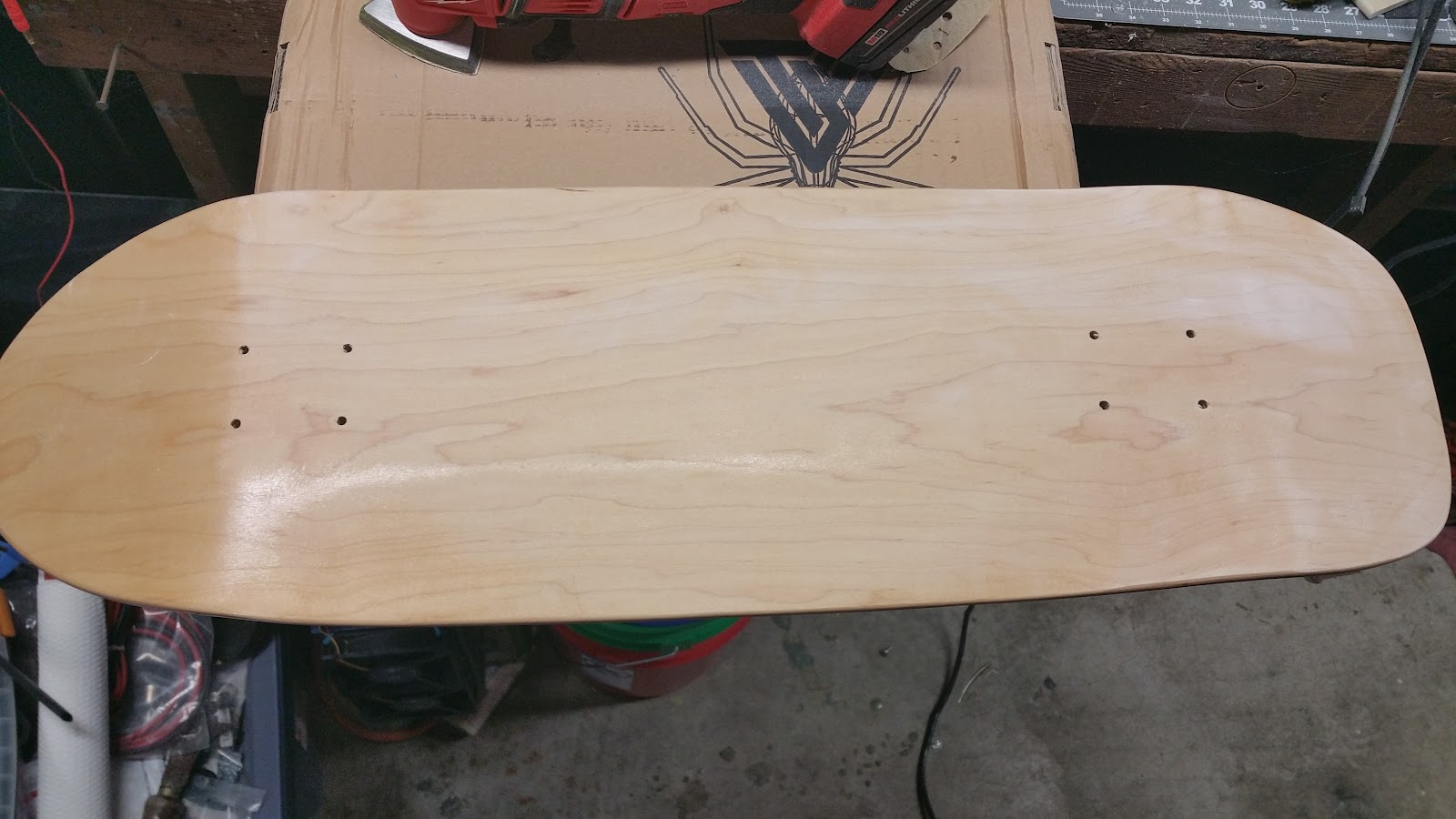 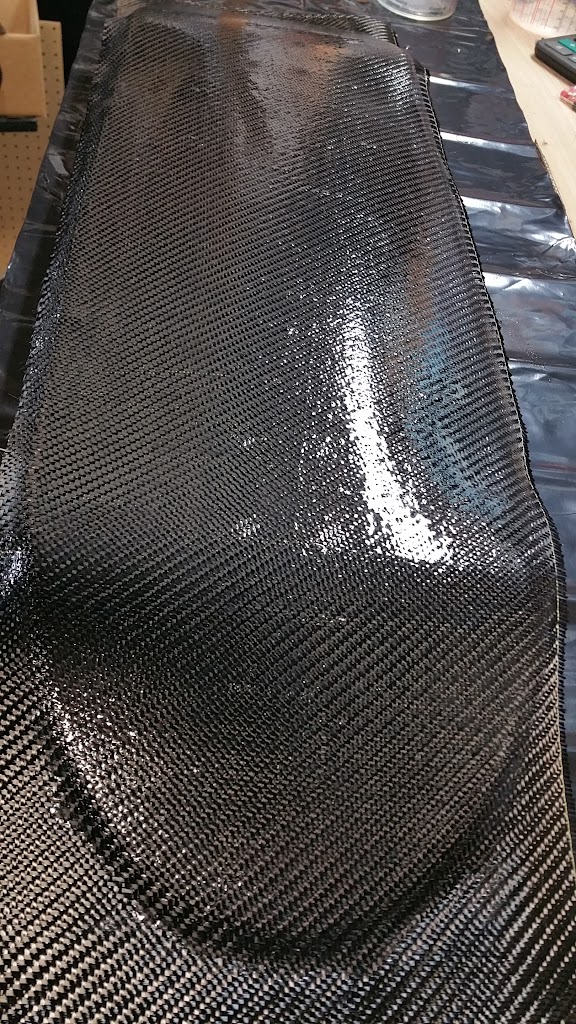 Waited for it to gel and trimmed the excess edges:

Still needs some sanding - top surface finer grits and maybe a quick clear/uv coat, and of course edges till flush.

I’ll sand it tonight when i get home , and drill out the existing holes. Then will do the same w/ the top and then drill new holes for increased WB - so it will be top and bottom CF. Grip it and start putting electronics on it.

Worst case this doesn’t work perfect for him and we setup another deck, or swap to a deck he likes better later. I’ll definitely keep the board as i think it’s going to be a nimble little ripper even on a single motor.

I considered the wedge for the front, but so far I’ve just been using a 1/4" rubber riser and mounting the truck at an angle, and it feels good to me. Very maneuverable, but still stable at 20+mph. Thanks man! Yeah, i’m stoked to actually build it for him. Something about giving someone something you’ve made vs bought…

Nice old Santa Cruz deck! Growing up in SC as a kid in the 80’s - those have a special place in my heart. Why i probably have been looking more and more at some old school decks like this one.

I especially appreciate your feedback on stability. I’m hoping to gear/setup for around 20mph. +/- a bit. I don’t want it to be too fast for him, and with the angle up front it could get squirrelly quick at speed. Why i was thinking of dewedging the front a bit.

what wheel size are those? That looks about perfect and might do similar wheel size. We’ll see what actually fits of course, but a good starting point.

How are you liking the hub motors ?

@sl33py Something AWESOME you built too! Such a cool gift.

This Santa Cruz was the first board I actually bought with my own money, used too, I think, and I’ve hung on to it for about 25 years, or so. Couldn’t ever bring myself to get rid of it. Now it finally has a new and better life as an eSk8.

This setup is on Jacob’s hubs which are 83mm, and I’ve got no wheel bite, but it is close when carving hard. This was another ridiculous experiment I tried with a double kick tail/double deck foam sandwich and even this was surprisingly stable at around 20mph. Tight trucks definitely help though.

@Kaly I’ve only got a few miles on them, but they feel pretty smooth and powerful so far. The urethane seems to ride better than I thought it would, but has developed an annoying squeak in one wheel when rolling with me on it. It’s like the urethane is slightly loose on the hub and rubs and squeaks when it rolls. I put a layer of grip tape between the hub and urethane, but haven’t taken it for a test ride yet to see if it fixed that problem.

Thank you I have a set of this ones but have not try them yet. The urethane issue sound like a problem

Top and bottom are CF’d and sanded. hand lay CF is a bit rougher than i’d like, but i think it turned out well. I did a quick progression of sanding from 80-220-400. Not super smooth, but don’t want to burn through into the CF. So going to give it a quick clear coat to give a bit of UV protection and some gloss to get the CF to pop.

I drilled out both front and rear for wider truck placement. Rear moved back about 1/2-3/4" and front is on the angled nose w/ two placement options (will have to test which works best). 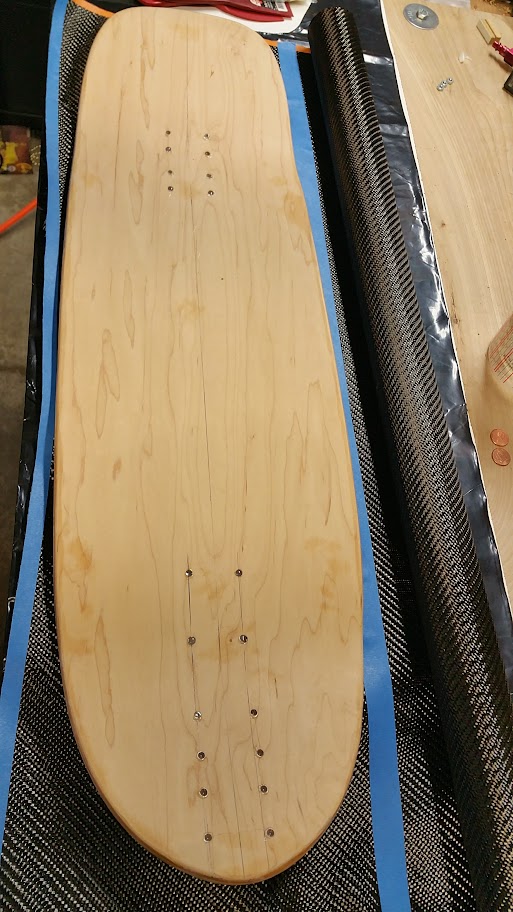 513×912
Not pictured, but with the deck visible through the weave of CF i added some neon green on the top to peek through for a bit of color.

Bottom sanding - can see it’s a bit bumpier than i like, but with a wet rag it looks really good. 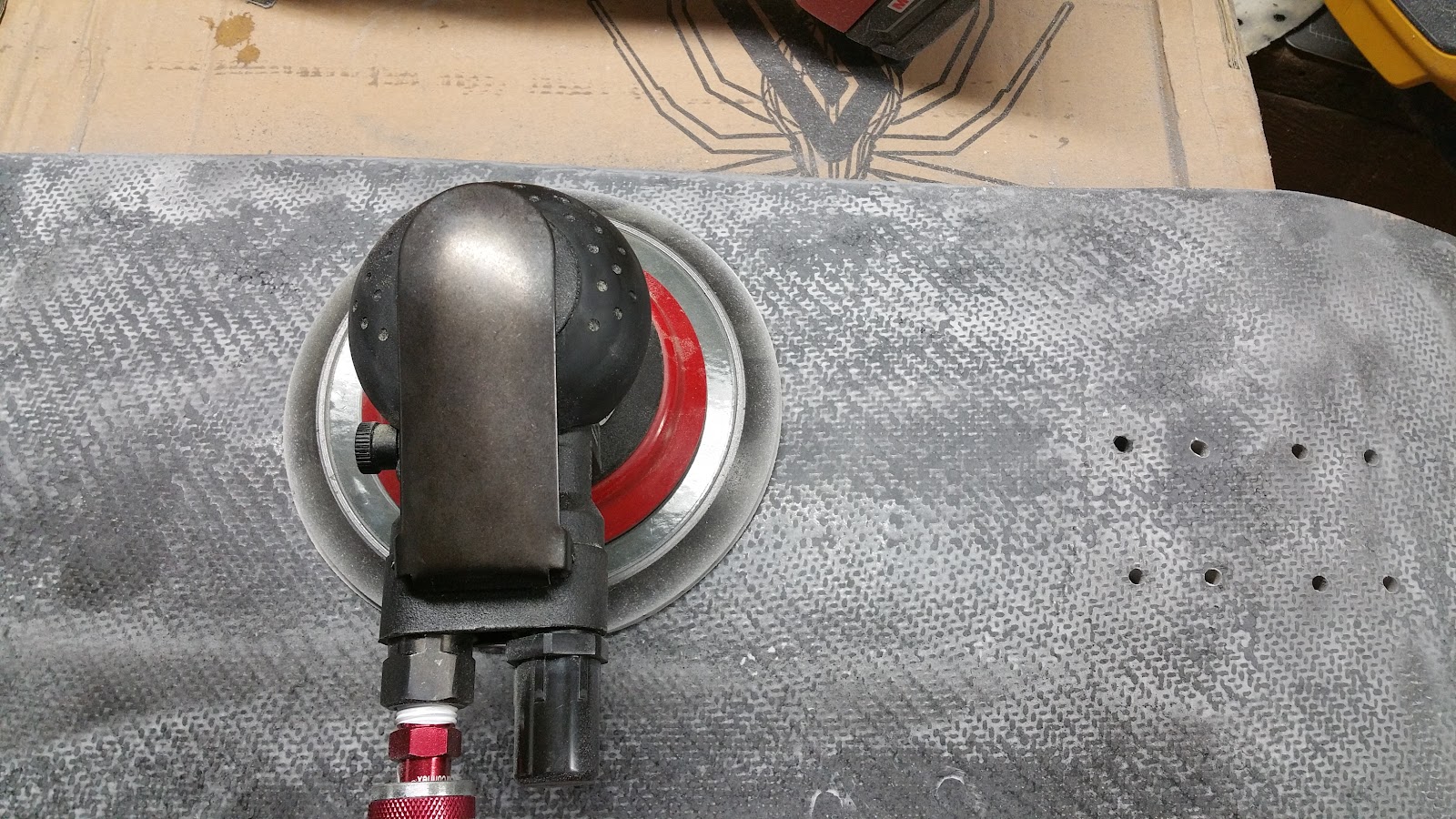 Hope to get it clear coated and the top gripped tonight when i get home. My buddy got in late last night and will hang out with him tonight - so hope to have it ready to assemble w/ him (as a surprise). Starting to feel like one of those car shows (pimp my ride or gas monkey’s) - where they have 5 minutes to finish the build before the buyer/owner shows up!

a couple lessons learned and tricks. I think in the future i’ll add a strip of packing tape along the edge to minimize the resin flowing around to the bottom (drips and runs underneath to sand/fix). Will also help keep the edge clear so less sanding - not a huge pain for the edge but the bottom is a lot more work. At least when doing the top after bottom is already CF. Those drips onto bare wood i’m going to sand anyway - no biggie.

Another thing i found helpful was to put a small dab of hot glue into the truck mounting holes to keep them from filling with epoxy. Still need to drill them out, but the bit feeds into the open hole and punches through the dab of glue and CF easy. Vs drilling out a fully plugged with epoxy hole…

I also cut the top CF a bit too tight (wanted to minimize sanding edge in flush), while too wet. Should’ve waited about an hour for it to gel first. top edges are a bit rough as a result, but luckily will be under grip! (except a strip to show the CF and color a bit).

Just in case anyone else wants to do similar later - might as well learn from my mistakes! This is all practice for my next two build which are both top/bottom CF and want them to look stellar!

Finished it after work - took a bit longer than expected, but turned out pretty well.

got some clear on the CF - really helped show the depth and give it some pop and shine! 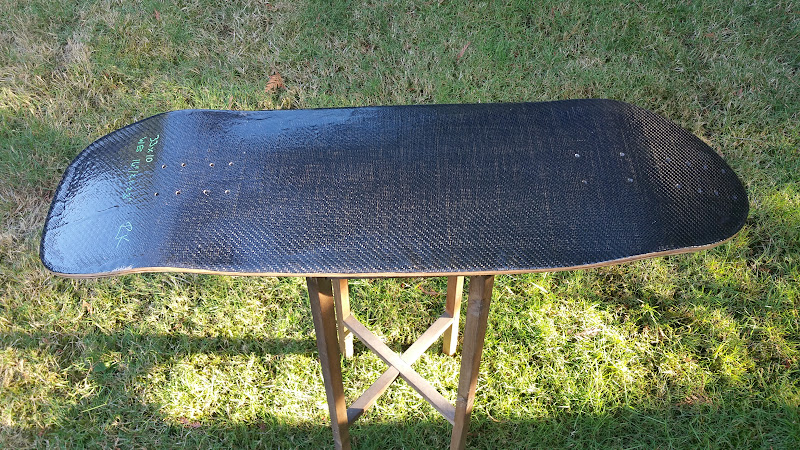 Measured the WB - went from 16" to 21-23 depending which mounting holes he uses. wrote it on the back and cleared it in.

got the top gripped - used the last bit of my vicious tape (without losing skin this time). 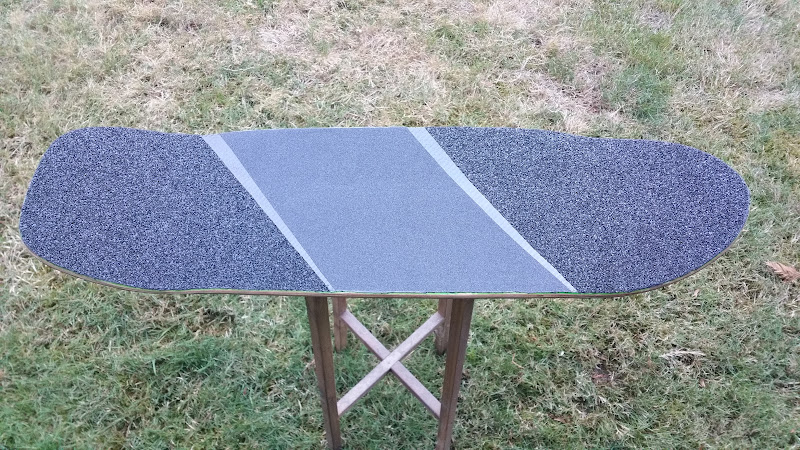 of course i set it up for regular and he rides goofy mongo!!

took it to our friends house and had them help me finish wiring (clear was barely dry…). Went out to the street to test it and let him ride it. Handed it to him and said he should carry his own board - it was awesome… his jaw hit the ground. So much fun.

Here’s the box of goodies to get him going. I had to change a few things. Went with the XERUN ESC and 6s 10Ah, and the 149kv motor. GT2b in badwolf enclosure for tx/rx. And B6ACv2 charger to keep it rolling. 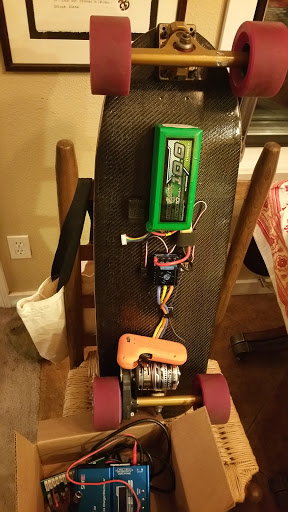 @sl33py Nice delivery! I love surprising people right in front of their faces like that. What’s the top speed on that thing? I’m guessing your friend is the long range, low speed cruiser type?

He is now! hehehe

Plus I only had a few spare 6s batteries - so 10Ah is what he got. And that was my only spare charger… so it ended up making a couple of the choices for me.

we already talked about splitting the pack to make it lower profile, and some abs/kydex to protect it.

The only gripe i had was the mount. even with the small metal shim - it came loose after the first ride. So i walked him through how to adjust, space from wheel/gear, and tighten it all back down. I hope it stays tight this time.