In electric skateboading we often use 20C-60C battery packs between 6S and 10S as this is usually plenty for our peak power needs.

Right now im looking for a battery that has a dischare C rating of about 120C, maybe even 150C, but at a relatively low capacity. The pack only needs to have around 1Ah of capacity. Has anyone here ever heard about such a high C rated battery with a capacity of about 1000mah?

The reason I need such a high C rating is because it will be for an electric dragster, which only needs power for about 20 seconds or even less. Any residual energy in the battery is a waste as the battery could have been lighter…

Yo, nice project you got there ! If that’s a RC dragster I get your concern. If that’s for hauling you around even on short drag, just get the bang for the buck.

Now you can order custom packs from Lonestar EV and SMC Racing (or Maxamps?). Lonestar is more into full size vehicles but can build killer packs nonetheless if your wallet can back it up.

SMC Racing is reputable for having high quality high discharge Lipos. Maxamps comes with great warranty and aftermarket which shows how much they trust their Lipos too.

Note that you should maybe look simply for the best sized total Wh / voltage accordingly to your electric setup instead of focusing on 1Ah packs. It may be quicker and easier to reach your goal like that.

how about super cap?

Right now im looking for a battery that has a dischare C rating of about 120C, maybe even 150C, but at a relatively low capacity. The pack only needs to have around 1Ah of capacity. Has anyone here ever heard about such a high C rated battery with a capacity of about 1000mah?

You’re only looking at half the equation:

If you want higher discharge, put batteries in parallel

I only need about 1000mah or even less. Adding more batteries = adding weight, which is not what you want in a dragster.

Thank you @Vanarian and @Nowind for the input, will check out the leads you gave

This is not going to be an e-board dragster? is it?

I am flying with racing drones that normally use 1300mah 4S lipos. The demand for C rating in this hobby is high. One of the best batteries at the moment we race with are acehe formula 1300mah 4s 95c. 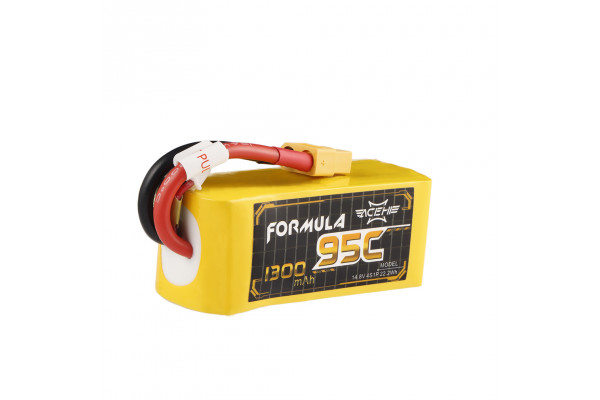 Acehe Formula 1300mAh 95C is the most powerful battery for racing multicopters. The constant current of 95C (burst up to 190C) meets the most demanding requirements for racing.

EDIT: An idea just came to my mind, you may look into supercapacitors.

what voltage will you be using on your dragster?

woo SMC for life. About the c ratings, those are total bs. No battery has a 95C discharge, that is ridiculous. That means that the battery could completely drain in under 1 minute. Noooo wayyy. Treat those with a grain of salt, the manufacturers fudge the numbers to the point where it is laughable. It is all about keeping market share so companies try to outdo others with bold C rating claims. There is nothing saying the C ratings must be tested, and if they are, no fixed circumstances are given.

We already know that C ratings are not acutely represented. We pretty much just use them as a means of. Compairing Lipos.

Thats not true, there are genuine brands who can do what they claim. Multistar can’t!

Still best to use third party testing as reference and like jmasta said the C rating just tells you one part S or cells in series doesn’t matter with C rating it tells you the internal resistance of the cells or the max discharge without significant voltage sag (C rating times Ah capacity = max discharge, 400mAh or .4Ah cell with 100C rating can discharge 40A continuous). Joshua Bardwell does some sort of scientific tests on various batteries from different brands definitely different performance characteristics but it varies what is best depending on what you’re targeting (and C rating can be a lie)

I totally agree that C rating is bs. But not looking at the C rating, the Formulas are the best lipos of that configuration that we fly here. They can’t do constant 95C, but manufacturer need to show somehow that they are better than 70C model (70C is also bs of course). We have tested many lipos, some of them claiming even to be 130C, but formulas are best we have here.

BTW battery can give you even 200C when you short it

BTW battery can give you even 200C when you short it

Yea but only once

or for less than a second

Thank you everyone for the input!