Here’s this monstrosity that I tried to build. The idea was a 3 wheel build in a “tadpole” configuration, with the drive motor in the back and truck wheels in the front. The motor was a Golden Motor Magic Pie 5 taken from an ebike that I also built after I upgraded the motor. The battery is the same battery that I use on my ebike, so I didn’t have to buy another battery.

The inspiration came from this user, who seemed like he did a similar thing with what looks like the same motor. VESC | C8080 | Planning wiring - 8/10 awg overkill? - #13 by jaybird

This thing was ridiculously heavy. The motor itself weighs 20 lbs, and with the battery and other stuff bolted to it, it was very unwieldy, in addition to being top heavy with the motor and battery above the pivot point. Even tightened extremely far, the bushing wobbled so much more under the extra weight.

The problem came when actually trying to ride it. I’m not sure if it was because of how I built it or simply its wacky geometry, but it was impossible to steer. Even leaning all the way to the right, it still veered left.

Due to all of these factors, I’m scrapping this idea and will try to build a 4-wheel drivetrain. It was an interesting exercise, though.

From a logic point of view, it makes sense to me that it’s hard to turn this thing. With a normal skateboard, the combo from front and back truck make it able to curve easier, think about modern (fancy) cars where the back wheels also are able to turn to reduce the turning radius. So in order to solve this, you either have to get your front truck as loose as possible (but lose stability) or get your rear hub to turn slightly together with the front truck.

I think you can get some inspiration from this speedboard 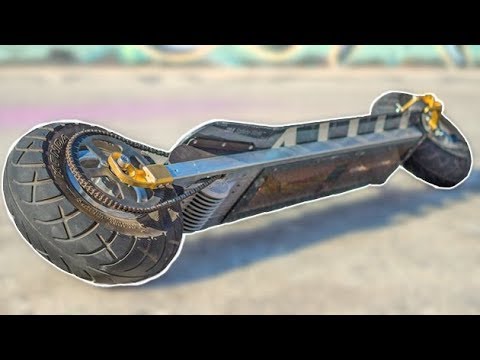 I think your wheels are the wrong size, if the front is small and the rear is large you’re rotating about a line that has bad leverage

Due to all of these factors, I’m scrapping this idea and will try to build a 4-wheel drivetrain. It was an interesting exercise, though.