Looks like today I fired my first VESC…Just don’t understand how and why… Last week I had sometime an ABS_Over_Current Fault, but it was just randomly and didn’t effect my riding. Yesterday I was out for a 20km ride and all was good. For the first 4min of my ride today everything was fine. Than I needed to stop because of traffic. In the moment I wanted to continue driving my master VESC just stoped working. I looked the log file I recorded and there was nothing special about motor or battery current. I didn’t hit max speed or something like this, but the PCB and Mosfet temp already have been around 68 degrees. So first question is, how it can happen that the temp rise up so fast so high without big current flowing? Second question, is there an opportunity to see that the DRV chip is really broken? I opened the cover and couldn’t find anything unusual. 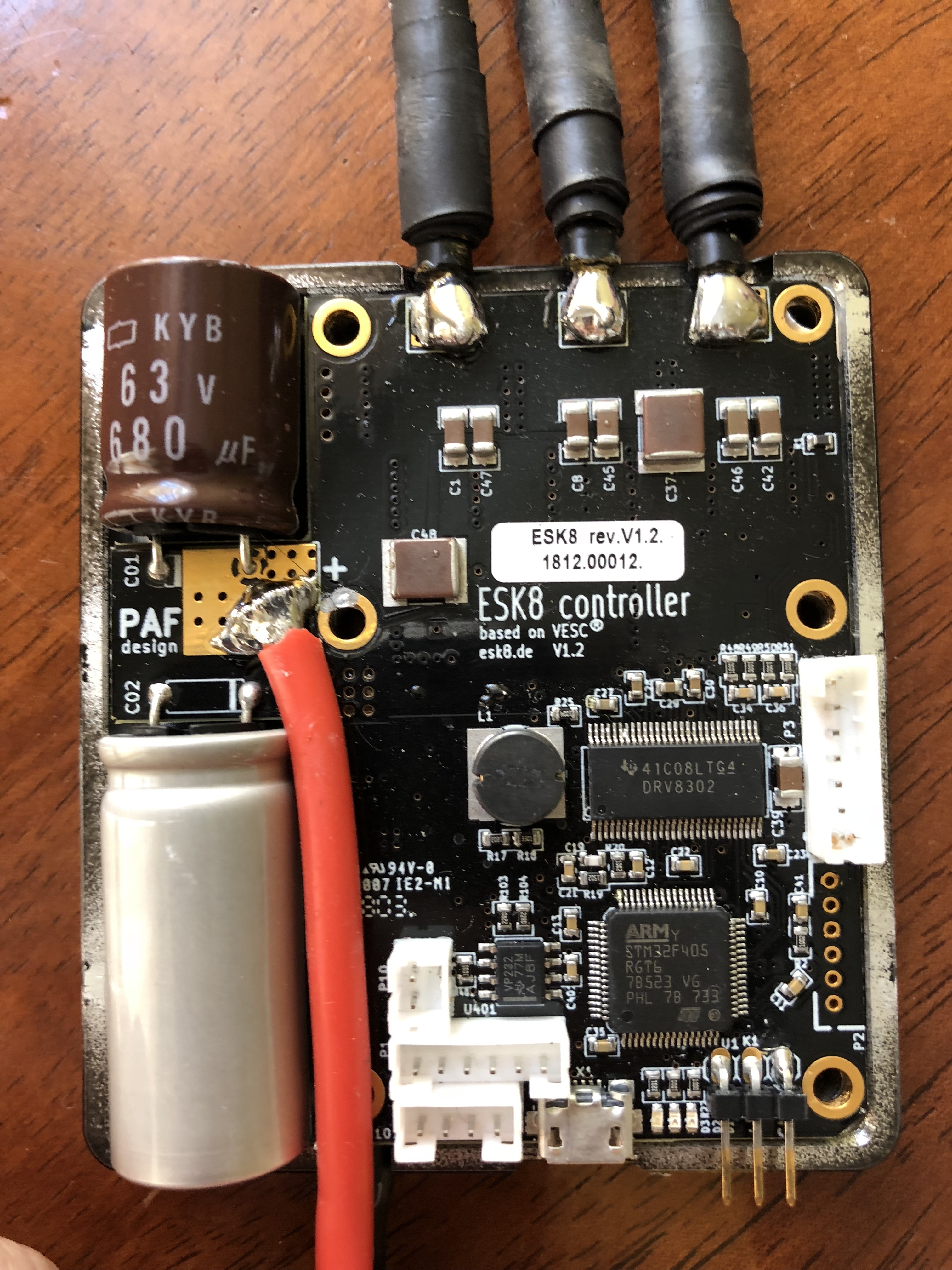 The problem is with the settings The esk8 controller can only 60A Since the motor max value is set to 80A The controller does that for a while but at some point that’s too much. The max motor may only be 60A. But that has already been mentioned in many topics. V4.12 with Mosfet’s max 50A and Directfet’s max 60A. 11S with a 190KV engine can be reached via the 60K ERPM. Were the limits set to 60K? The 60C ° are normal at 60A, that the temperature has gone up were closer to the settings of 80A. It does not always have to be a hole in the DRV when it’s broken. Ever read the default in the terminal? Is there DRV error? When turning on the controller what LEDs are visible? Blue, and blinks red 3x?

Ok that’s new for me. Thought the max current related to the max battery current and that hw4.12 can handle max 50a input. Never the less I set the motor max to 80a I never reached more than 40a according to all the log files I have. So that shouldn’t be the issue. The max erpm was set to 60000 and -60000 and I also never reached it. If I power on the vesc I get three times red light. No blue light anymore. If to look the live data in the bldc tool than I see the DRV fault. That’s the only fault i see. Is there something like fault history log in the bldc tool? Would be nice if I could look if there more faults than only the drv.

The DRV error is the problem in itself. Motor max means how much A should go through the fets, direction motor and that is 60A max. at Directfets And the maximum battery current means with how much A the battery should be discharged. Since the controller is not limited. You have the LG HG2 with 20A discharge and 4P What 80A equals that shared by 2 controllers makes 40A maximum per controller, so you did not come across 40A. but the batteries can go over these values for a short time Unfortunately, I can not say exactly what made the mistake. But it is strange that the red LED is still flashing and the blue is not working anymore Usually it’s the other way around after a DRV error

How much did you enroll in Batt min?

I mean i never came over motor 40a. Battery never over 36a. The battery min was set to -7a. The motor min to -45a Strange was that I had last week already a abs over current fault. Only in time of switching on. I made some trouble shooting and found out that if I disconnect the motor sensor wires the fault disappear. After two days I tried again with sensor wires and all was good. Couldn’t explain this, but maybe it was already a sign?

Just in case I would take a try and change the DRV chip. What else I need to do after? Flashing firmware?

And a general question to the motor amps. I read here often that it’s not so important to which value it’s set. I even read that you can set it to 200a and from there start to go down till you found your perfect settings? How can people write like this? I thought also other controllers like focbox etc use directfets??? I‘m a bit confused now.

The battery Max setting should be only 60a but the Motor max can be higher. Only if you Pull more than 60a continous from the battery you can smoke the Esc after a while

That’s what I always thought and that’s how I set up my vesc. For sure the battery amps depends from your battery and from the ability of your vesc to get rid of the heat. But with a good heatsink a vesc 4.12 should be able to handle min 50a. Which is not so easy to draw in dual for constant current

The motor amps shouldn’t matter as you can’t really overload your motor. But that’s don’t match with what @esk8 said

Motor max is the setting how much ampere the Controller can give the engine. Limited by the fet’s I speak for our controller now! I drive VTC6 with 3120mAh 10S / 6P which corresponds to 180A. Each controller can get up to 90A from the battery If I set 90A at motor max, the controller will try this To give 90A, but how long? But I think I have found the mistake. Your batt min was too low, -7A is too little. The controller only gives your battery back 7A Your engines produce much more So the controller is not going anywhere with the remaining energy and distributed them on the pcb which caused the error due to an overvoltage on the pcb If you had taken the original settings, Motor max 60A Mottor min -60A Bat Max 60A Batt min -20A nothing would have happened. I’ve measured that the 63 motors can produce up to 54 volts which also have to go back to the battery, otherwise it destroys the PCB. I think the controller already has too much power at the first fault brought the PCB. It can happen that the superfluous current causes motor detection to be lost. You do not notice that and next time you drive without engine detection That can kill the DRV.

Sounds logic but still don’t understand some things. As i run dual and set twice 7a my total bat min was 14a which is already not so far from 20a. I don’t understand why the energy while breaking go through the pcb. The motor can produce heat and give away the energy plus the -14a back to the battery. And that’s always just for a peak time.

And how about the repair question? If I replace the drv. Can you say me if it’s necessary to upload something? Do i need special Tools for it?

But that is only a guess! Because something like that has already happened to me.

Motor max is the setting how much ampere the Controller can give the engine. Limited by the fet’s

You mean that we should only use 60a Motor max? You have three Phase wires and at least three mosfets. Each could run at 60a. So you would not have a Problem by running more than 60a Motor max?!

I read a bit more about Bat min settings here… If to take the words from @Ackmaniac and Trampa right, it 100% can´t be the reason why the DRV broke.

I guess it´s was somehow connected with the ABS_Over_current messages I had last week. Usually the ABS Fault indicates a lose component, shitty solder joint, or something like this. Visually I couldn´t find anything lose. Buuuut the VESC cover was broken when I got them delivered. You said everything should be fine non the less, but who knows maybe some component was hit or affected…who knows…now it´s too late.

FOC'ing around (weak brakes and cutout)

The VESC converts the voltage of the battery to the right amount of voltage for the motor. This is the duty cycle. So when the vesc works at 10% duty cycle then the motor runs at 10% of the batterys voltage. At the same time the battery only has to...