My first eboard will be in production by the middle of December. Project name, “Sugarloaf”. I’ve ordered all the parts after countless hours researching and staring into space problem solving (my wife has been catching me often with a blank stare and it’s freaking her out). Anyhow, I first would like to thank the following members for giving me some perspective on my build: @mmaner @NickTheDude @wmj259 @Hummie @DilatedPupils @longhairedboy @anorak234 @Jebe @darkkevind & Thanks to @makevoid for the eSk8 calculator.

Anyhow, I’ve already received my 39in blank longboard and 90mm flywheels. Dude those wheels are monsters! I will update with pictures of the board as I progress with the build. Everything took a considerable amount of time to research but when I was ready to pull the trigger I didn’t hesitate. The only part of this build that was frustrating was finding a lipo charger at a reasonable price. Anyhow I went with (2) Turnigy 5S 5000mah Lipos, an iMaxRC B6 Twins Dual-Output DC Charger 100W, and a HobbyKing 350w 25A power supply.

I’ve attached pictures of my parts, my calculator results, and parts list. As I’m a noob, I don’t have enough experience to spot any problems as of yet. So, I’ll need your perspective if you’re willing. Please feel free to dig into my build and let me know if you all see any potential problems. I’d like to end this by saying I’m extremely appreciative and respect the bright minds of this community and only hope in time I can contribute as other have. Thanks! 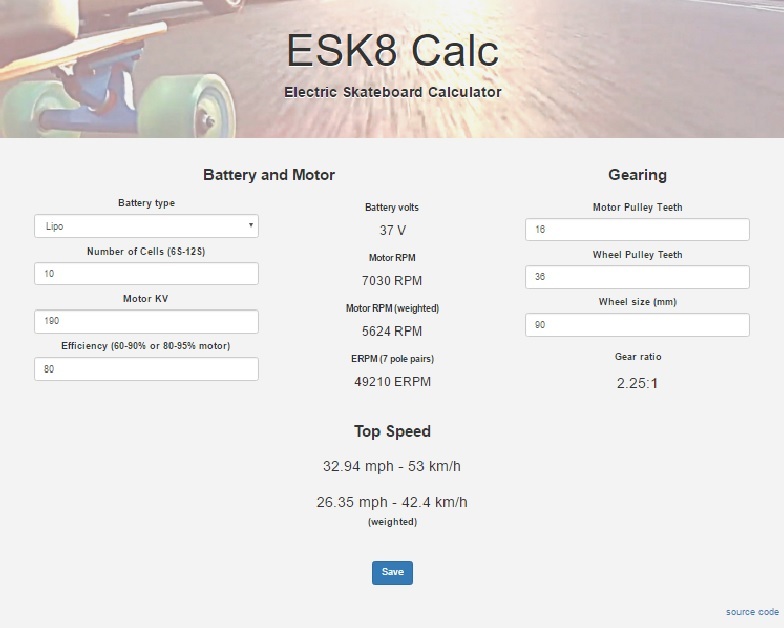 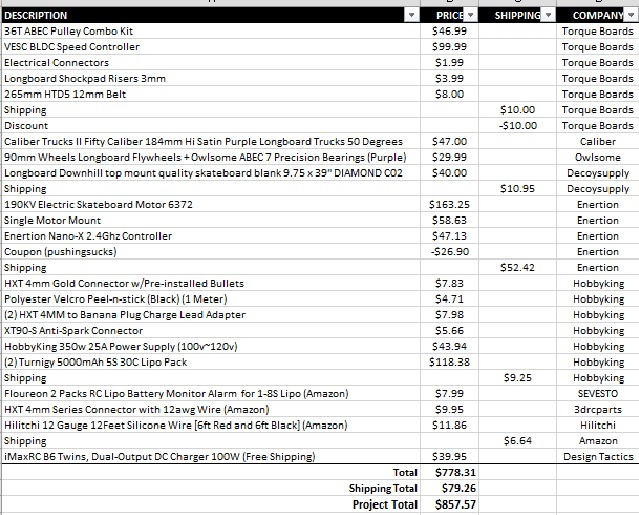 I’ve received all my parts minus the grip tape and most importantly my Nano-X radio! I’ve put together the board, trucks, wheels, and risers. I love the purple color! And the wheels are huge! Next, today I worked on the wiring. I have 2 5S Lipos in series with a series connector. After the series connector I made a 4mm connector to XT90 adaptor. Within that adaptor I created a antispark loop key. I was hoping to get everyone’s opinion on how I wired everything and if they see any potential problems. I look forward to your comments. Thanks! I ended up changing decks for the mean time. Although the deck is pretty long the wheel base was shorter than I’m used to. At the speeds I intend on “flying” at I wanted to make sure I had the stability. So, I repurposed a Sector9 40 in cruiser board I had. Also, not that it’s a big deal or anything but I changed the name of my board from Sugarloaf to Soundwave (after my favorite Transformers character! Lastly, I ordered a new rc remote from Miami Electric which came quickly in time for me to get riding. Unfortunately, the Nano-X has taken more than a month to receive so I’ll be using it on another build. I’m happy to say that my board is complete and I’m really happy with the results. The next things to work on will be to change the connectors to xt90’s, add my on/off switch from Miami Electric, and find a better solution for my enclosure. Looks like you’ve got everything (at first glance). Good luck brudda

Thanks! I’m psyched. Now back to real life till I get the parts

Much more organised than I was ! May pay to get some angled risers in case the motor ends up rubbing on the board.

Aww man, thanks! That means a lot! I did end up getting some shockpad 3mm risers from TorqueBoards but I’m not sure how well they’ll do. The wheels are seriously huge!

that’s going to be a pretty sweet ride. Seems like you have everything together. Good luck with your build!

Looks like you have what you need. Just out of curiosity, why did you choose the R-SPEC motor versus a sensored motor like the one @jlabs sells ? Was it because of the special deal enertion had on R-SPEC motors and Vescs ? Don’t get me wrong, there is nothing wrong with the motor you purchased, I’m just curious is all.

Thanks for checking out my build! Being new to the diy community I feel like I’ve only scratched the surface of what vendors are out there. Honestly, I’d say a big part of what I went with Enertions R-Spec is because of the quality and the marketing. Before coming to the esk8.builders forum a lot of my research was done on YouTube. 2 of the only DIY vendors that had any videos were Enertion & . Cause I’m a noob the videos you YT gave me some validity to their companies. Also, I really liked Jason’s explanation of what goes into manufacturing and quality control of his motors: https://www.youtube.com/watch?v=7EhVnBHUYJs

The reason I went with for the VESC is because he also had a couple video of how he programmed it. https://www.youtube.com/watch?v=dxDXUrk-7ek I guess the short answer to all of this is it came down to support. However, also after researching a lot in here my next build I want to support the community more. But, that will come after I get comfortable with building. Thanks again and I’m about to check out @jlabs site right now

Thanks for the approval, it means a lot for my confidence. Stay tuned as I post up the pics

For your next build you might to check out FOC programming as well as running a sensored set up. I can’t tell you how awesome FOC with a sensored motor is to ride on. Smooth start from standstill and lowest noise possible from an esk8. Glad you are getting into the hobby.

When speaking with Enertion I did ask if the motor was sensored and they did say it wasn’t. I was looking for a sensored motor to cover my basis. However, I didn’t really know what its functionality was and found that it wasn’t required. After ordering it I had a little remorse that I didn’t get a motor with sensor cables, especially for the price of the R-Spec that I paid.

Thanks for welcoming me to the community. It seems very supportive to the noobs

Don’t sweat it too much, every build I’ve done I’ve removed or heat shrink the sensor cable. Olin does the same, as do most vendors.

Are sensor cables something you can add after the fact?

Gotcha, thanks! For my next build I’ll look into a sensors motor.

Love the deck. I was eyeballing that one or a very similar one but the shipping to the EU was a dealbreaker. Good luck with the build!

THanks! I bought it from decoysupply on eBay. It was about $40 for the board and & $11 shipping from California. I could imagine the ahipping breaking the bank a little.

Hey guys! Here’s An update to my first build the “Sugarloaf” board. I’ve added some pictures and some questions above. I look forward to your comments!

How stiff are the decks?

There is no flex on his deck. I believe it’s 8 or 9 ply maple. It’s very stiff and great for speed