I think Flipsky and Mboard use generic Chinese motors but Torqueboards motors imo are high quality and they don’t look like any of the other Chinese generic motors.

I’ve used TB motors on pretty much all my builds and they have not let me down.

Sweet! I, too, plan to use TB motors, but just wanted to make sure I wasn’t getting cheated outta money.

If cost doesn’t bother you too much I’d go for TB, If you wanna save a buck then sk3’s

You just can’t go wrong with @torqueboards gear. Don’t know about the flipsky as yet and Mb stuff is re branded diyeboard generic chinese crap. With the tb stuff you get a solid unit with back up.

Just get @torqueboards if the price isnt as much as an issue. Actually it would save you more cash and trouble down the road cause they’ve got the best feedback among the bunch and will very likely outlast the other two in performance and reliability

Torqueboards motors imo are high quality and they don’t look like any of the other Chinese generic motors.

Are you sure? FreeRChobby motors Also if you check their store, they have Flipsky style motor too: Link

Neither of the motors you posted are the same or even look the same as TB motors, the first one looks similar but it’s def a different can and the Flipsky you posted looks absolutely nothing like a TB motor other than the Color.

Freerc/flipsky all have magnet issues. The tb motors are strong and solid with a good back up. There is absolutely no comparison between them. Lets not kid ourselves though and think they are not made in a shenzen factory because I am 100% certain they are but this said that does not make for a bad product. What makes for a bad product are cheap components, bad QA and non existent back up. TB products have all those bases covered and mine have not let me down yet after a year. Neither have my HK sk3’s My workshop looks like a motor graveyard tbh with all the cheap options I went for back in the day.

Does anyone know the weight of their TB 170KV 6374 motor? If it’s very close to 860gram then they might just be the same motor.

0.87kg so 870grams. TB branding along with their customizations add another 10 grams. 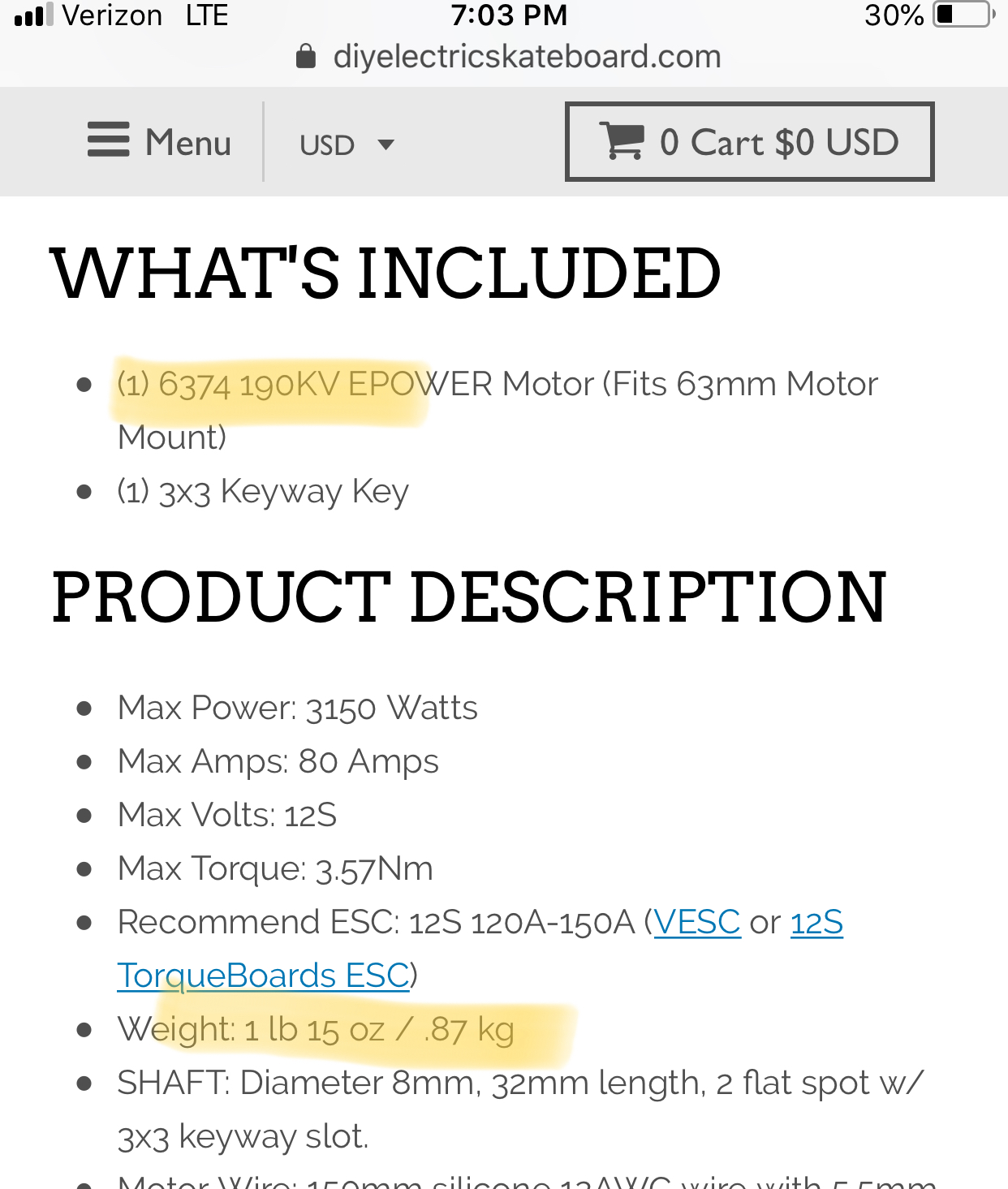 Well it’s not exact the same in terms of appearance as TB might have customized it a bit to better suit the community needs. However you can still see they share similar form/design between the two. I did my search based on this comment

Motors and their manufacturers

Most of the motors we use are generally manufactured by Maytech or FreeRCHobby, both of which can be contacted on Alibaba.

It was only on the 6374, i have so many miles on 6354 from them running them on my current high end board never had a magnet fail on me or fall off.

I have dual Flipsky 6354 and have been running them almost daily, work and back. Nothing extreme just normal use and so far they have been good, done about 100 miles so not so much. Will have to see how long they will last. For the price they are good.

I guess if you run them within their limits they are fine. Maybe people who are having problems are using them on high powered builds.

And thats the problem. Not everyone experiences issues but some will and this is down to the legendary chinese QA when you weigh up the good with the bad the tb will always come out on top because the QA is so much better.
One thing with flipsky though in particular is their willingness to listen and act though so full marks for that.
In the chinese market some manufacturers float to the top (maytech for example) and it looks like flipsky will be one of those.

I havent seen a single person with problems on the 6354 though, the internal design was also vastly different.

But yeah i like them, great support and they listend.

I use TB, BKB, and maytech depending on the build

If u look around the forums, last I head FS motors had issues, I’ve never used mboards or cared to try so I can’t comment on them but the 3 I said up top have been good to me so far

I use tb, maytech and hk motors. I understand that problems occur though so as important as quality is back up is just as necessary. I have currently 6 hk motors. 2 sk3 and 4 sk8. One of the sk8 was bad out of the box. I ran it and the rear bearing imploded shorting out the vesc and frying the drv. I stripped it down and found the issue. Raised a complaint with HK and they replaced the motor and the vesc even though I had stripped it all down. I put it all in a box in bits and sent it off. Next week the board was back on the road. This is as important to me as a quality product. They wanted it back to assess the issue not prove it was faulty so they could improve the quality. They sent out the replacements before receiving the return and credited me the shipping. That is stellar customer service. I don’t care that some products slip through the QA process if its backed up by the company you purchase it from.