You’ll probably laugh for me, for my insanity or not knowing.

I would like to use a fuse, put it between batteries and VESC. And now madness. Can I use it? There is a single-pole and two-pole?? Polarity on the first one does not matter since only one pole is going thru, I reccomend the first option. The amp rating depends on how many amps you will pull from your battery if you put it betweeen battery and bms/esc

I have the first on exact same with 80A. Its abit too much I think, the smaller 30A also does the job well. I mean you dont get really to draw continuous 60 - 70A, so 80A is just wayyyyy ovver the top.

There are a few threads going through these exact topics already…

Wiring up an in-line fuse

as far as i can say, i would never use a fuse.

simple as that, if the fuse blows because you drain too much amps (mostly going downhill/uphill) and the connection between VESC and Batterys is lost, your VESC will blow up because it cant forward the electric energy that is produced by the motors. so if your fuse blows, you will probably lose your VESC(s) and maybe your battery. Also you can be injured because no brakes!

the connection between VESC and Batterys is lost, your VESC will blow up because it cant forward the electric energy that is produced by the motors.

Wow, is this really true? I always thought I was lowering chances of a damaged VESC by using an inline fuse.

Thats true but you probably never ever will produce that many amps while braking, and in the reverse case you will notice a 100% loss of power, you just don’t have to hit your brakes then… simple as that. The fuse however is very usefull as it protects your battery from short circuit, doesn’t do much to protect your vesc.

If your fuse didn’t blow all the hardware would blow up anyways, since you know, your fuse just stopped a huge in-rush of current.

In our aplications fuse should be rated high enough for their main use to be to prevent a short to the batteries that could make your full board go up in flames with you on top. So screw the vesc

It can happen, @Nordle you can create very powerful currents while braking downhill e.g.

Also, if the VESC loses connection to the battery, the motor can induce voltage and the vesc could be powered on just “half” and some application configurations or programm configurations can be lost. if powering on without checking it could blow up your VESC

Sure it can happen but you will recognize first and you can react accordingly. And no you can’t create more current than you set in your settings, if you could your vesc already would be faulty.

If you have no fuse and aren’t discharging off a BMS and you get a short circuit, your battery probably catches fire and destroys the entire board, so you’re probably losing the expensive battery at the very least. What if it shorts while its in your house and causes serious fire damage? If your battery is actively shorting, your VESC probably won’t respond at all anyway since power isn’t getting to it and it can’t activate braking. If you’re going downhill, power is being dumped into the battery which is short circuiting which makes everything worse anyway.

If you do have a fuse, the fuse blows and you lose a <$200 VESC and a $5 fuse at the most. No fires, no property damage. If you’re wearing appropriate safety gear, you bail and roll and come away with no injuries.

Seems pretty clear to me… 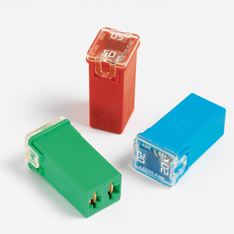 with 2 spade connectors. The fuses are quite small, encased in plastic and available from any store that carries auto parts since they’re commonly used in GM vehicles.

If the fuse explodes, how can I lose VESC? When the fuse blows, the current flowing from the battery to the VESC is cut off.

I think he means that the vesc will blow before the fuse blows since it shouldn’t suck in so much amperage.

It was mentioned above that this would only happen if you were going downhill. I’m pretty sure you’re only generating enough current to do anything if you’re actively braking, which you couldn’t do because the VESC would be off, so I don’t see how the VESC would be destroyed anyway, but I also have no evidence to the contrary.

Either way, the fuse is there to stop short circuits that would otherwise cause a fire. Generally speaking you should use a fuse that is the same amperage or a bit higher than what you intend to put your motor maximum at.

The thing is, the fuse of sized correctly will never blow during extreme operation, be it an abnormal brake current or whatever

A 60A fuse does not blow when you reach 60,1A or 70A or 100A, each current will make it blow earlier, but never immediate, if I’m not mistaken there is an standard about how the fuses should blow, maybe not every cheap fuse follow, perhaps some one with E.E. can chime in

The scenario that a fuse does protect is if there is a short on the main power circuit that can actually reache a very high current, the rest it does nothing, you charging wiring will probably melt first than a 30A fuse, the balances wires even less, the fets inside the controller the same

Ok this discussion I have to say is rather absurd. Fuse is fuse and fuse made to protect. It works and its implemented everywhere in our lives. The fuse main job here is to prevent shorts and flame in batteries. Vesc broke, thats no problem. Board goes on flame, thats hell expensive roasted brick. Btw, have you ever tested how much amp does regen brake does? The energy saved is not alot, maybe around 5% equivalent usage. Unless you spin ur motor like a generator, how much amp really does a 4000 rpm does? You’re breaking btw, so it gets less and less during the breaking period. I couldn’t imagine someone burning down their fuse due to braking

. I think 30A - 50A fuse is more than sufficient. If your board constant draw is 60A per second, mate you got something wrong.

Note: motor amp is measured in burst mode and vesc can handle 100A - 150A constant with decent cooling (according to vedder). Check ur vesc log and ride the board, then tell me how much the amp draw really is. I have to say 30A burst with 1-3A constant 80% of the time.