Got my VESC! But is there a problem?

After ordering my VESC on the 15th of February, I finally received it today! Nobody can say I’m not patient.

This is my first VESC and only my seconds eboard build, so I have a few (noob) concerns.

Uploaded you will find a pic highlighting one area of concern. It looks like the ground wire’s solder spills over onto (what to me looks like a) MOSFET, the same thing occurs on the other side. Is this normal? Would this not cause a short circuit somehow?

Second total noob question: The thermal plastic covering the VESC, does that generally stay on, or do some people take it off in their builds? yes that is perfectly normal, if you notice on all the other mosfets, the same pins are “shorted” together

@weihan I think it’s fine and won’t affect performance, although I agree that the soldering job isn’t very precise.

Leave the plastic heat shrink on, it protects against shorts and has a little bit of moisture protection

Is this vesc from enertion?

I got my Enertion VESC today and it has a single big cap, so I don’t think so.

I got my Enertion VESC today and it has a single big cap, so I don’t think so.

that is very sad

Why is that sad?

Cause it’s shown with 3 caps + pcb on enertion’s store. And multiple small caps > one biggie.

Number of caps doesn’t really matter, as long as there’s enough capacitance and voltage that the VESC needs. But I agree, a bit misleading on the website.

@wiehan You may want to take a sharp blade and trim out a patch right above your mosfets for cooling. It allows more airflow to let those mosfets “breathe”, but I wouldn’t take it all off. It’s a pretty durable material that will protect your VESC. You are going to have to cut it to get to your JST connectors anyway.

Here’s an example from http://www.ollinboardcompany.com/product/vedder-s-speed-controller Is this from enertion too?

To address your solder concerns…Here’s a couple of quick pics. 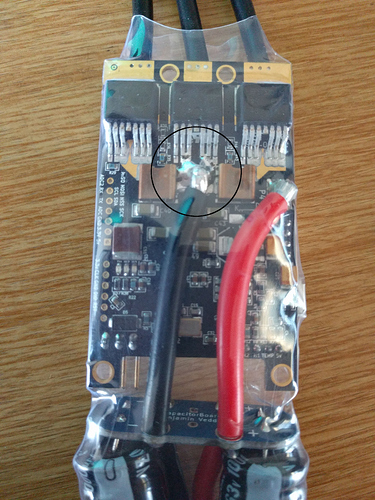 I received my enertion VESC today, and it has 2 capacitors vs 3 like the Ollin board VESCs I have.

@onloop is it at least possible after 3 months of delay that i get my vesc’s with 3 caps like they are on the pic’s from ur page?

I guess it depends where you get it shipped from. My Enertion VESC came from a Texas mfg and it only had 1 cap.

Mine came from texas as well, “MacroFab, inc.” I am fine with two, as long as when I order the second one it matches this one. Hm yea same factory. I wonder why mine came with one.