Hey everyone, I’ve been working on this project for a little while now and a friend of mine said I should share it with all you awesome people! I built almost everything myself from the board to the trucks to the sprocket. Basically the goal was to make an awesome board for riding through snow in the winter to get to class. I designed it to run off of a cheaper than hell chinesium e-bike speed controller and to drive the two rear wheels off of a single sk3 motor through a solid rear axle. Yeah I know solid rear axle sucks for pavement but the goal for this was for ripping around in the snow so cut me some slack. I’ve got most of the build documented over on my build blog at: https://connormakes.com/category/project-p-l-a-i-d/ I’ve run into some issues in the final stages and could really use some advice from the more experienced community.

Alright here arises the issue, after getting everything put together and running including a battery tray, throttle, handbrake, and springs for the trucks I took it out for a test drive. It has plenty of power and easily spins the rear wheels but turning feels really off for some reason. Like when trying to turn if I shift my weight all the way over to one edge the board barely turns but then once it does it doesn’t want to return to center. I’m pretty sure four things could be causing the issue. The deck is too low and gives little leverage when trying to turn, the board end angle is too steep and again doesn’t give enough leverage when turning, the springs are too weak or not set up properly (honestly they’re on the weak side), and finally the lack of differential is resisting and change in direction. I’m going to experiment with these issues but let me know if you have any suggestions! I’ll also try to get some video of the issue asap.

I’ll post some pictures here so you can see where I’m at so far. 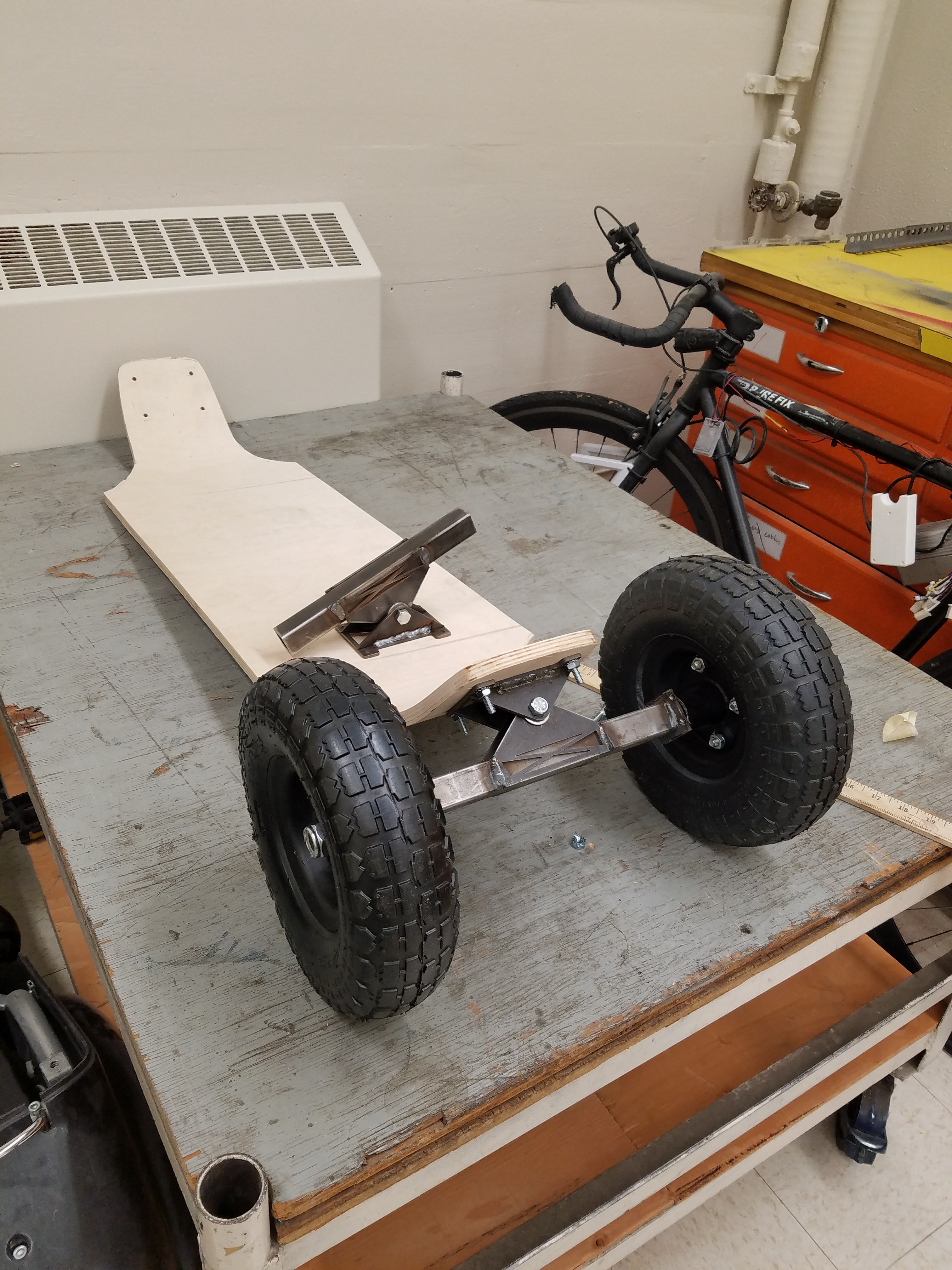 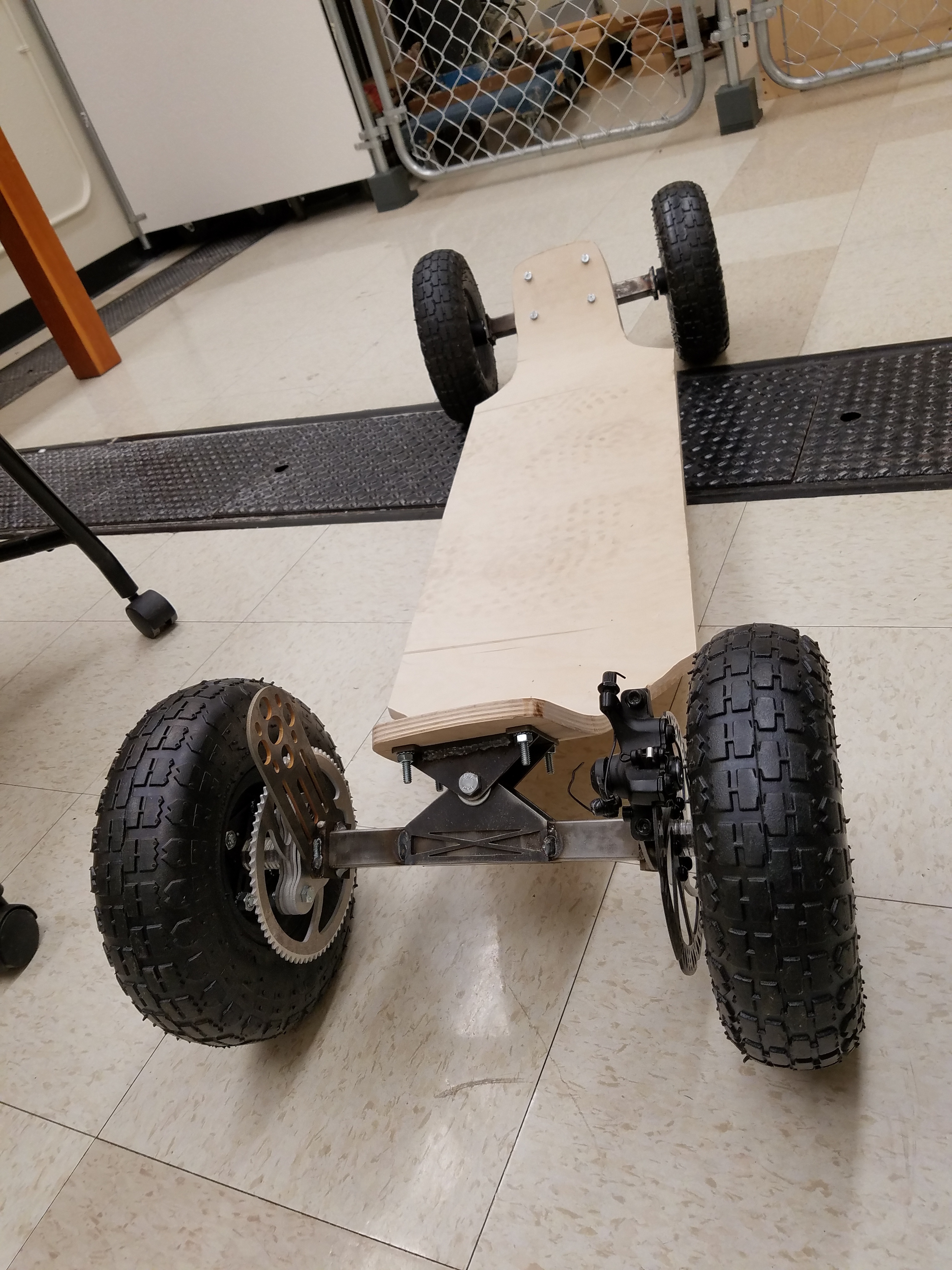 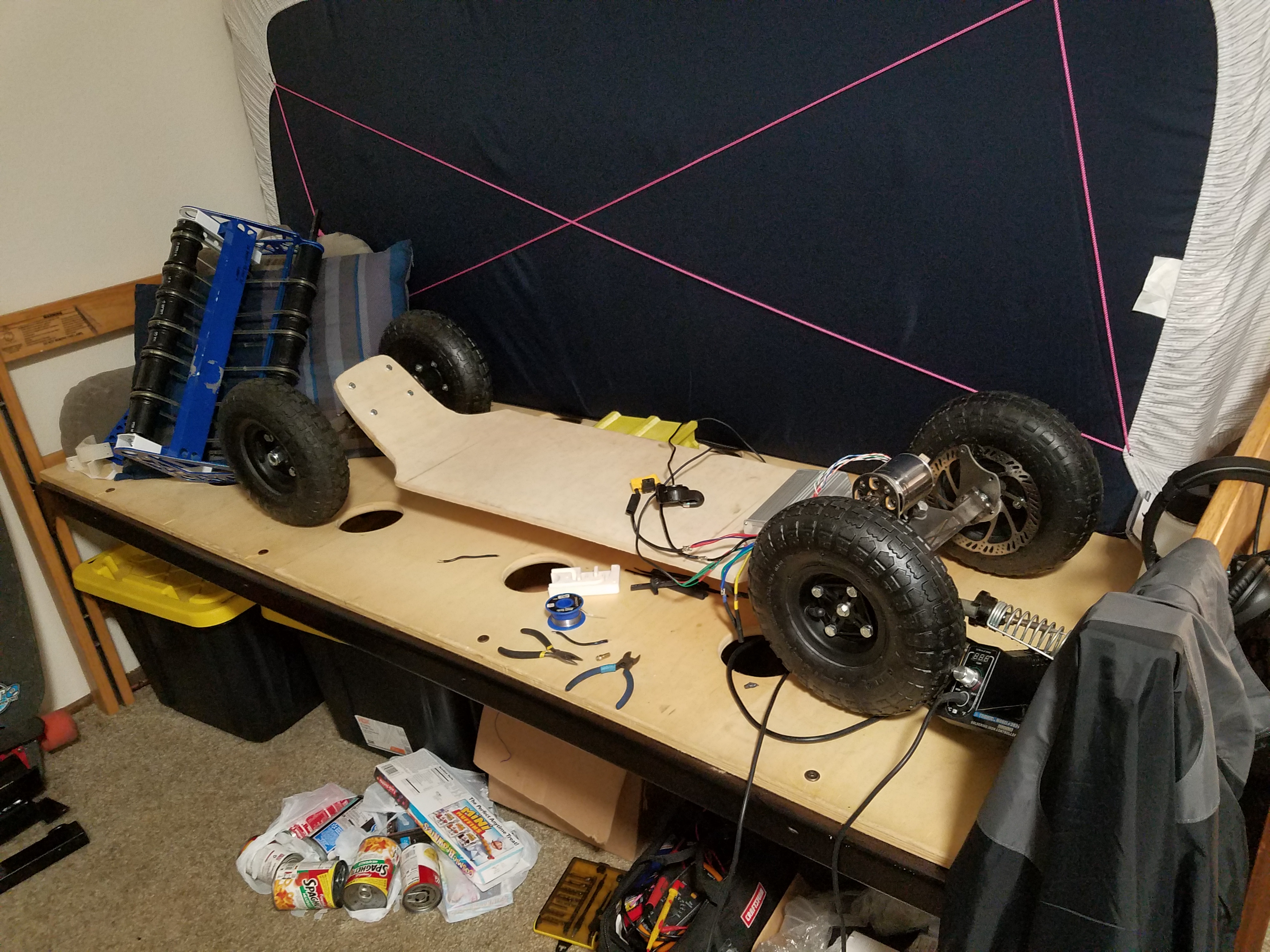 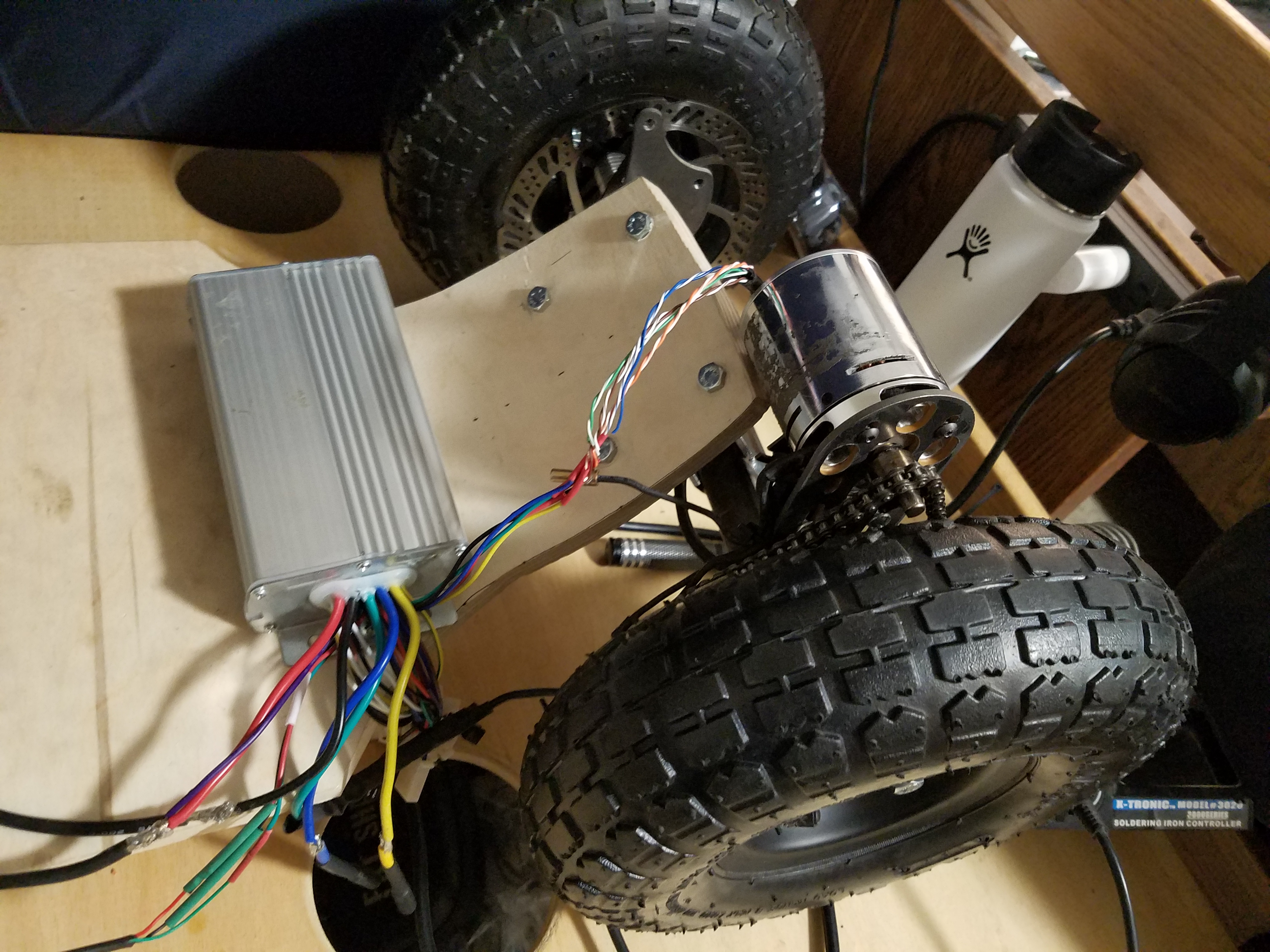 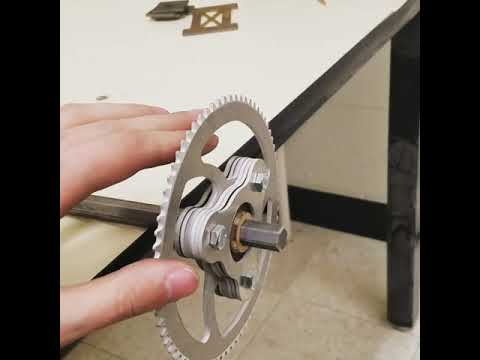 Yea those angles are pretty extreme. Maybe try an adjustable baseplate and find the right angle!

Lift the board off the ground a bit more and find the right angle for you and I think you’ll feel a lot better.

I’m sure more people with mtb experience will step up and give you finer details than me!

@Itsmedant thanks for the advice! should I try reducing the ride height relative to the trucks or the truck angle first? Is 45 degrees too much? I’m sure it goes past this under load, but still.

I would get the deck up a bit higher first, you can do that with some cheap riser pads. For being an “off road” board, it looks like its lower than my street boards!

It may give you enough travel back and forth on the trucks and its the cheaper option at this point.

@Itsmedant Thanks for the advice! I’ll try adjusting that as soon as I can get to the shop and let you know how it came out.

Hi @rocka ! First respect that you start up doing so much parts of your board from scratch

The angle on most mtb are around 30-35 degree. 45 is pretty steep. I think it’s a combination of all the things you already put into account.

I would start with print some angle riser to get down to 35 degree ( or weld or cut some riser out of metal) and see if things get better.

@Andy87 Hey thanks! I really just wanted to find a way to drive two wheels with one motor to save a little money. I’ll print risers and see how much a 35-degree angle affects the turn in. Thanks for your help!

I fully appreciate the effort and skills going into this project buddy.

Some practical questions though:

How do the back wheels turn at a lean? Surely just using a Flipsky 4.12 from ebay and two sk3s would have worked out significantly less expensive, give you the options required to drive a skateboard and bolt straight on without the hassle?

I only ask because you’ve mentioned cutting costs with a single motor but in the grand scheme of things you’ve chucked loads of time at this to save about $70? It’s not over yet either, once you get it running it’ll require a load of unchartered fiddling to make it work

If you print risers than add some meat to get a bit more clearance. Clearance never bad

Hey thanks for helping @brenternet on pavement I’m expecting to have the rear wheels skip like cars with welded difs do but I’m not quite sure just how bad it will be. On loose surface there SHOULD be enough slip for it to not be noticeable, at least I’m guessing. I already had these electronics from another project and they’ve been reliable so far plus I’m familiar with them. I had a bunch of problems with the vesc so I’m trying to avoid anything like that.

For this build I’ve got about $40 total into it, not including the parts I already had laying around. Honestly you’re right, if I billed out my time at half minimum wage I could probably buy a boosted board by now. But that’s not why we do these builds, we do them because once you spend the time getting the project working you’ve got something no one else has and something you can be proud of and that’s priceless.

@Andy87 I never really expected for it to end up that low I was planning on at least 5" of ground clearance. But the board ends developed a bigger radius going into the angle forcing me to mount the trucks higher up. At the time I didn’t think it would matter but now it seems like a big oversight.

Did you think about adding bindings? They help a lot to especially if you don’t have a concave to turn the board. The thing I would worry is this place 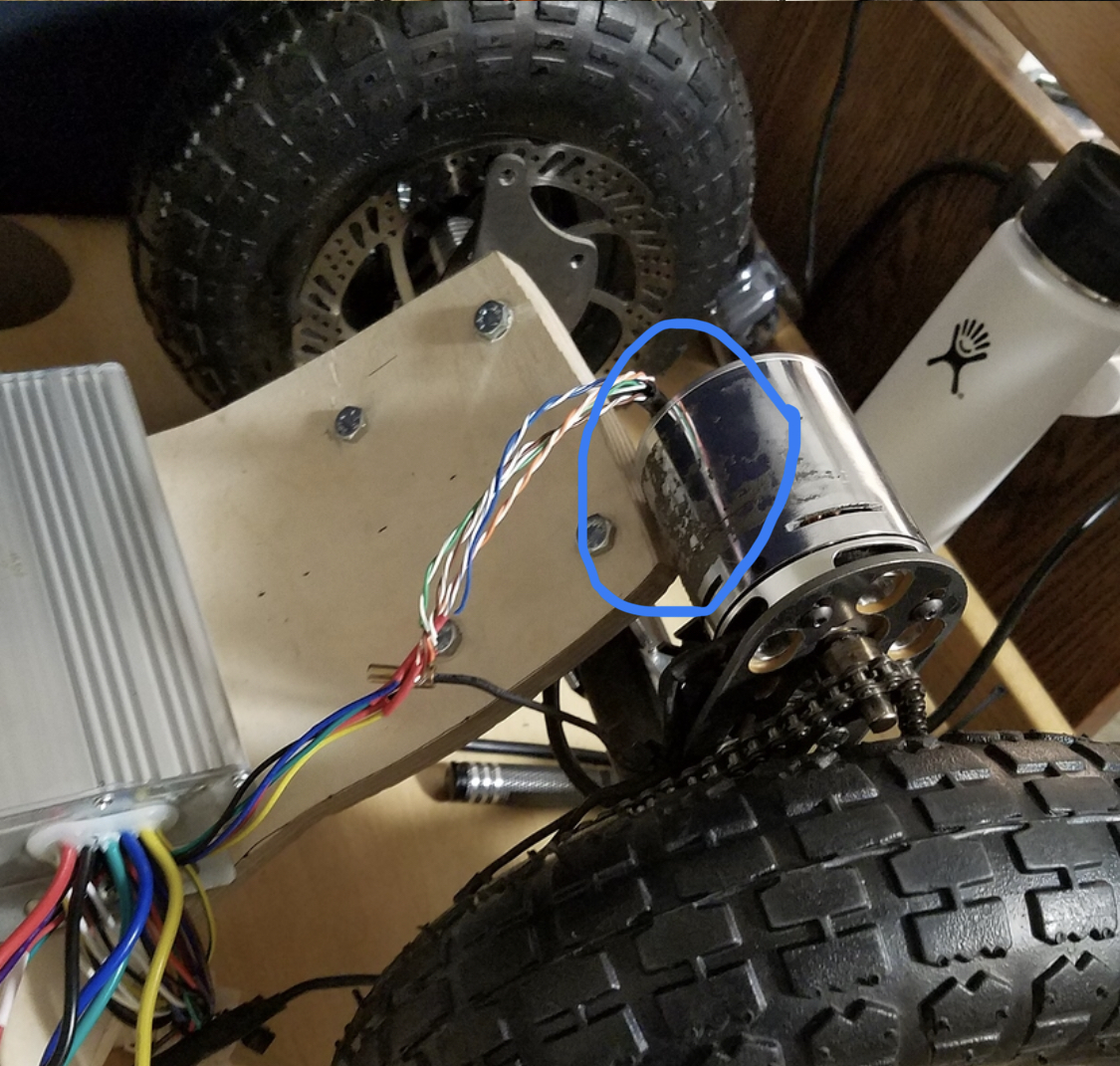 The motor sitting very close to the deck. I guess you have enough place for the motor of you doing sharp turns, but looks very very close

@Andy87 Bindings where part of the plan, and griptape. But that was more for keeping the board attached to me then it was turning, and with how it turns right now I don’t really want to be attached to it.

The motor does just clear as is but I am definitely going to have to cut it down a little more to get proper clearance. But right now it wont rub at any angle.

If you’re interested I’ve got a whole right up of the design so far on my website here. https://connormakes.com/category/project-p-l-a-i-d/

@grozniy Hey thanks! I’ve put a lot of work into it!