I guess first let me explain the name. https://www.youtube.com/watch?v=VIVIegSt81k

So hexagons are cool. But I don’t like flex that much. And the biggest motors make it gone. So hexa(notso)flexagone. The simple goal is to make a stupid powerful street carver that can deal with the sub optimal roads, sidewalks, and bike lanes in my city. I also wanted reliability (mostly), as I’m plenty close enough to work to make this a great mode of transportation during the 3 weeks of nice weather Florida experiences. 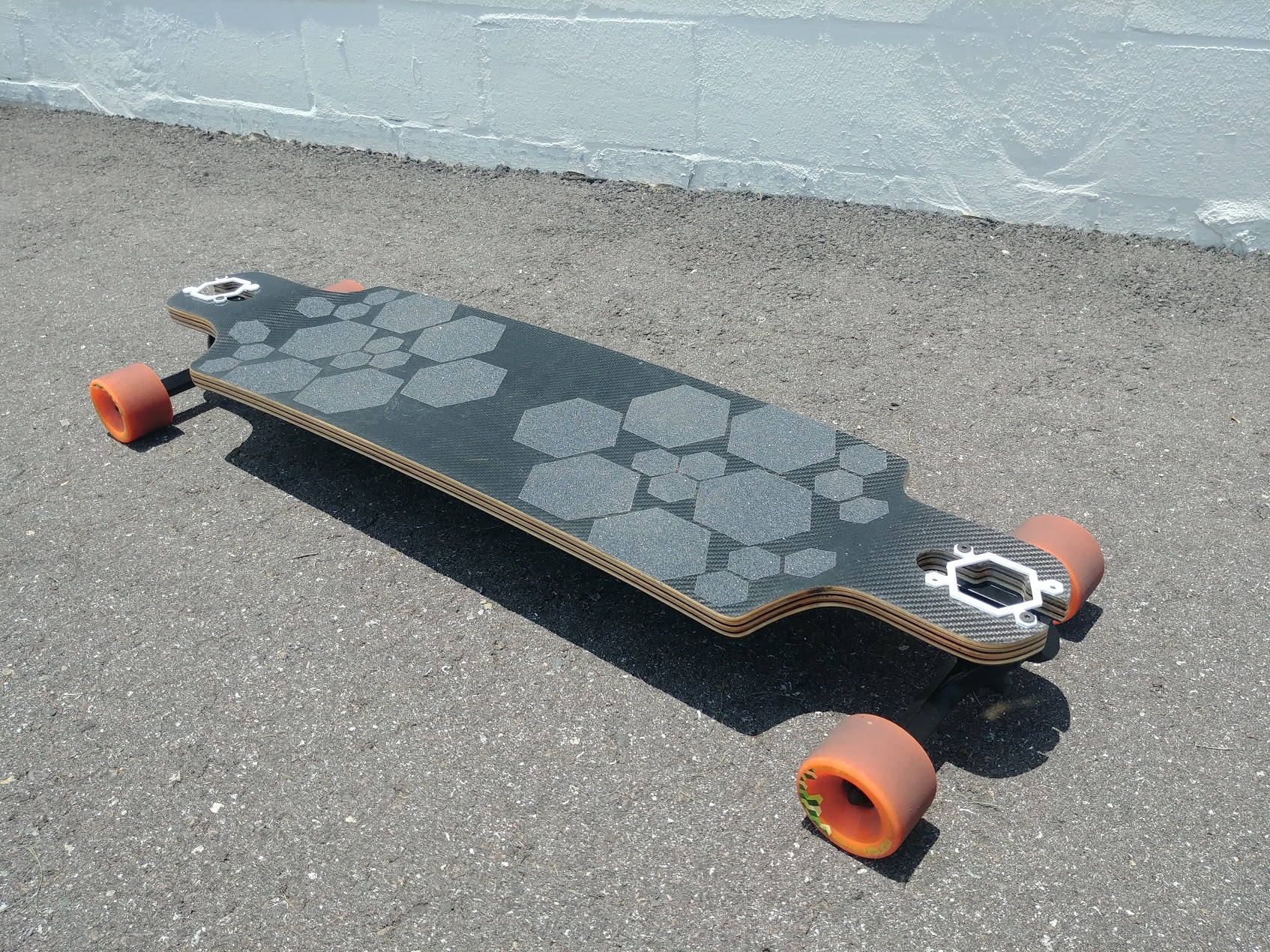 Cut the griptape, install the trucks, throw on some old wheels I had, and it’s a great push deck. The screw spacer is 3d printed and holds up nicely. Later I print it in black ABS instead of white TPU. It pushes around really nice, but the hollow section for batteries makes a very odd resonance every time you hit a stone or twig. Obviously I’m going to fill it with batteries later, so no big deal.

Next up is the hubs and proper wheels. After considering the psychotiller wheels (they are really nice) I ended up buying a 3d printer and printing some from the printed thread. It cost me just a bit more than the sixshooters, but now I have a 3d printer, and it’s so gosh darn useful to just print spare parts for other projects.

Later I lowered the infill rate to 50% and printing times are about 17hrs. Because of the larger mass of plastic, that gear ended up wobbling a little bit during test fitting, I have a spare I might have to swap over.

This took FOREVER. Almost a week of printing, repairing the (cheap craigslist) printer, and more printing. At this point I thought it would be a great time to move to a new house. So everything after this point is after about a month of getting moved in and building a proper workshop in the garage.

My belts came today (8/20/2018), so I can finally test fit everything. Hubs go on the wheels, zealous bearings cause they’re the best. Needed a bit longer bolt for the idler pulley, but the ones I used on the wheel hubs fit. Blah blah blah, less talky, more buildporn. 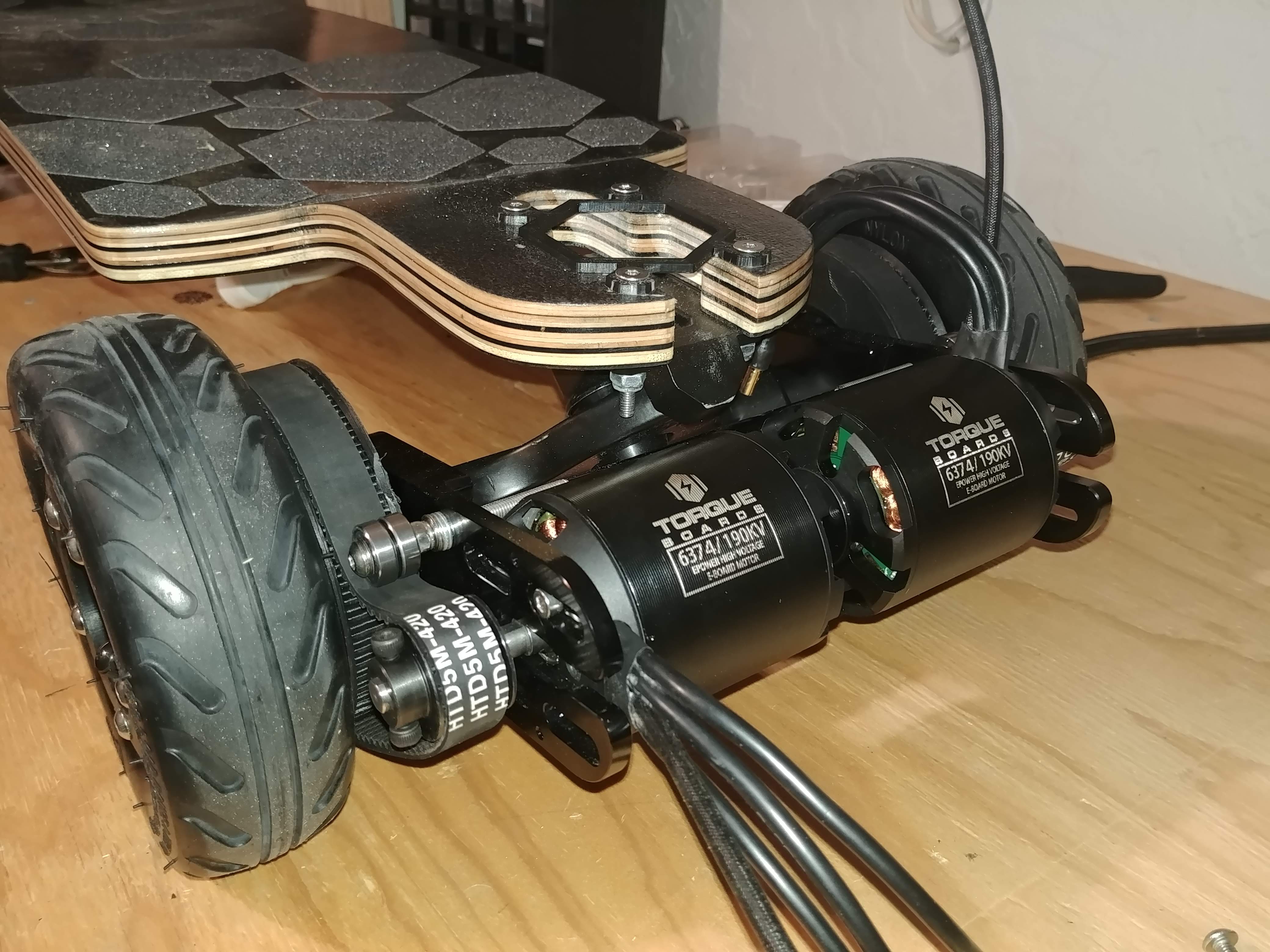 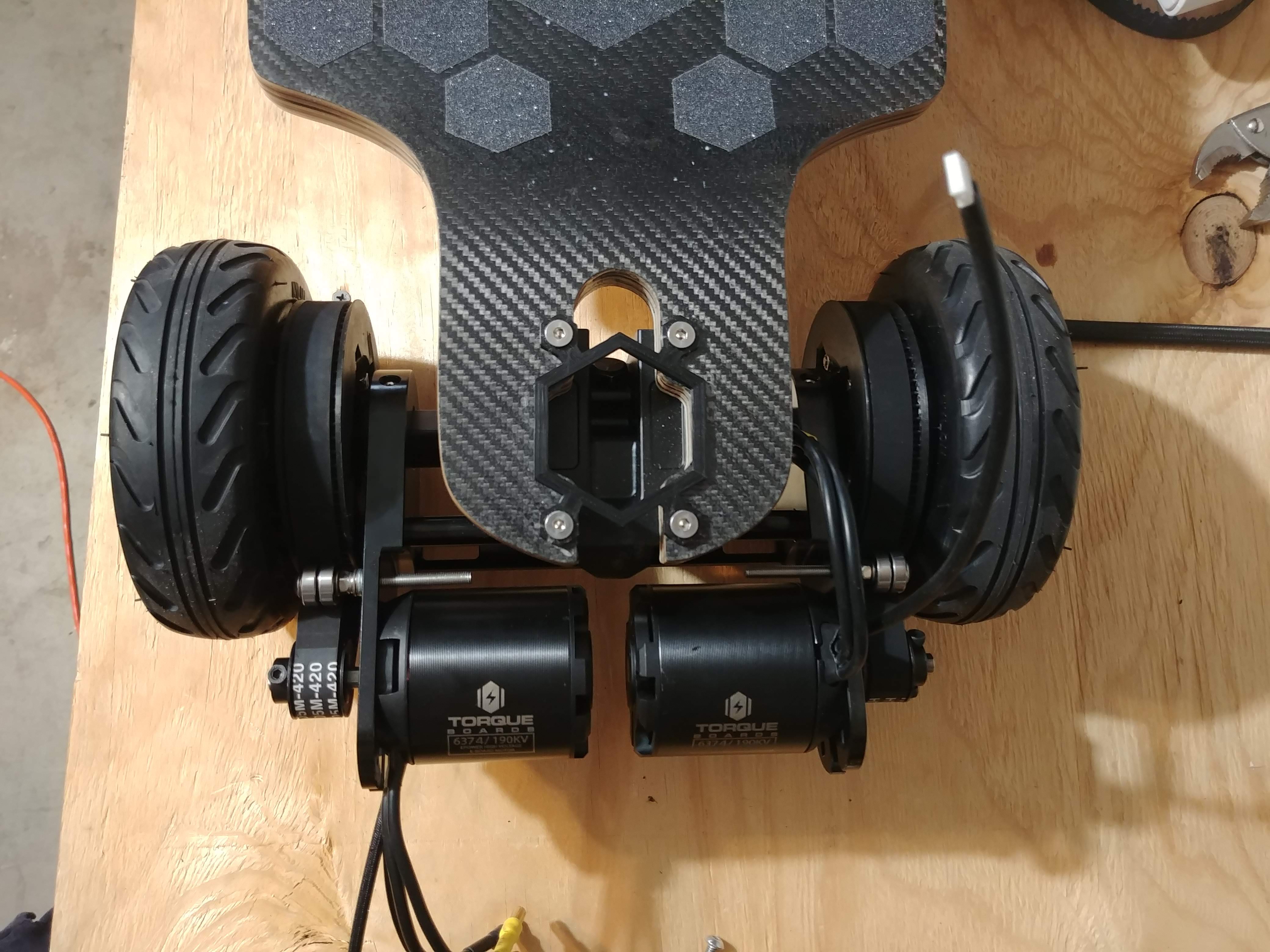 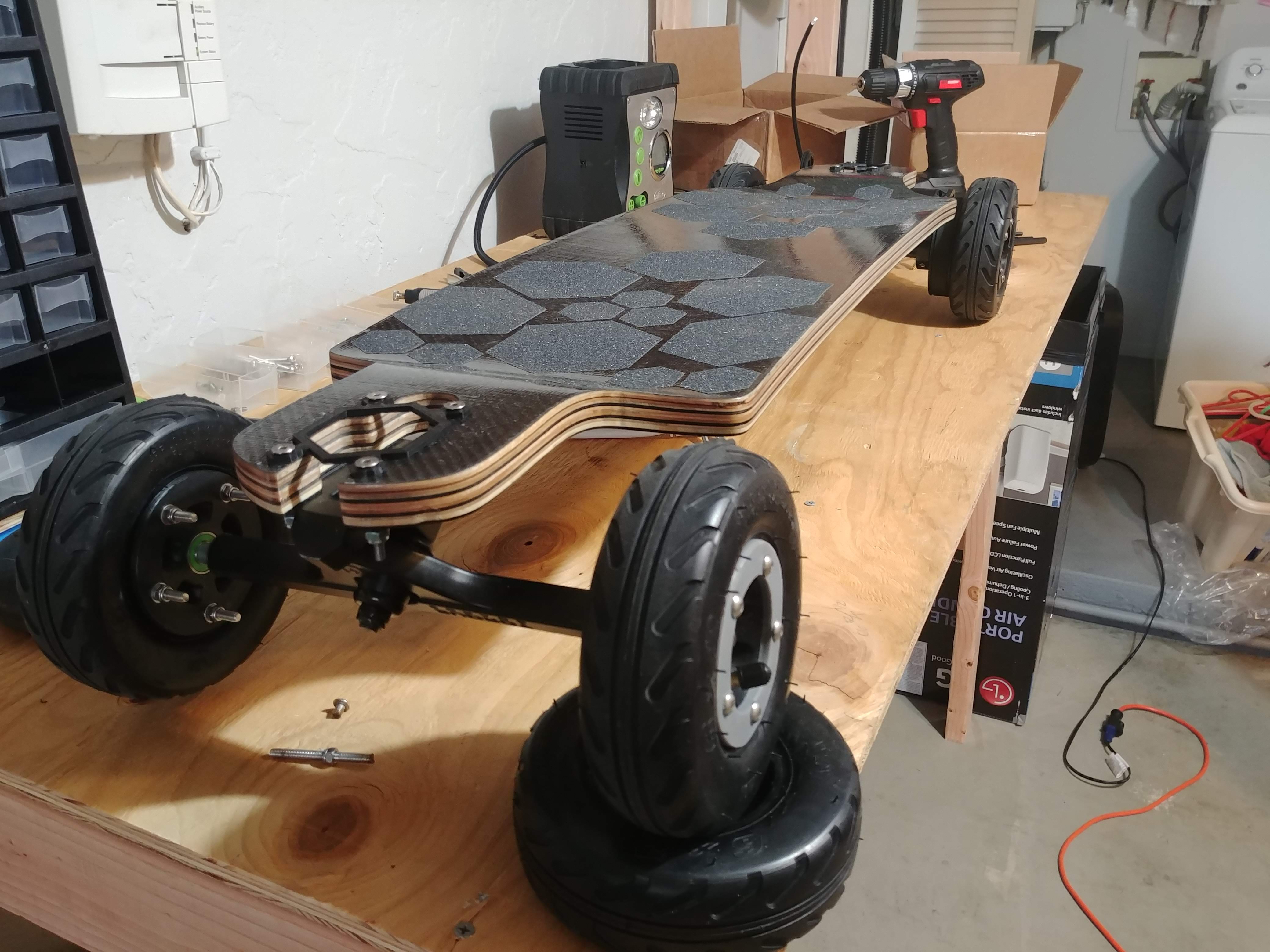 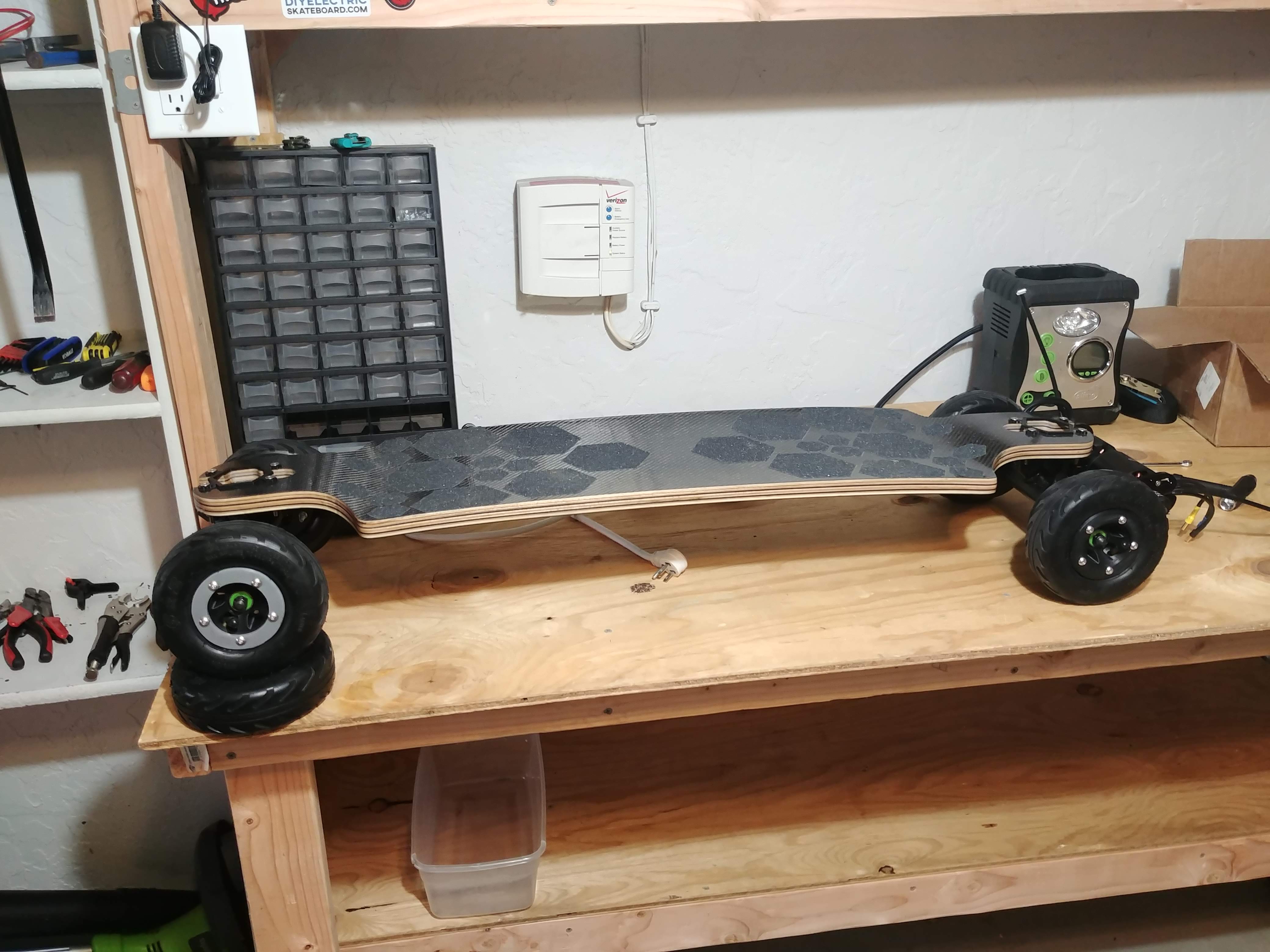 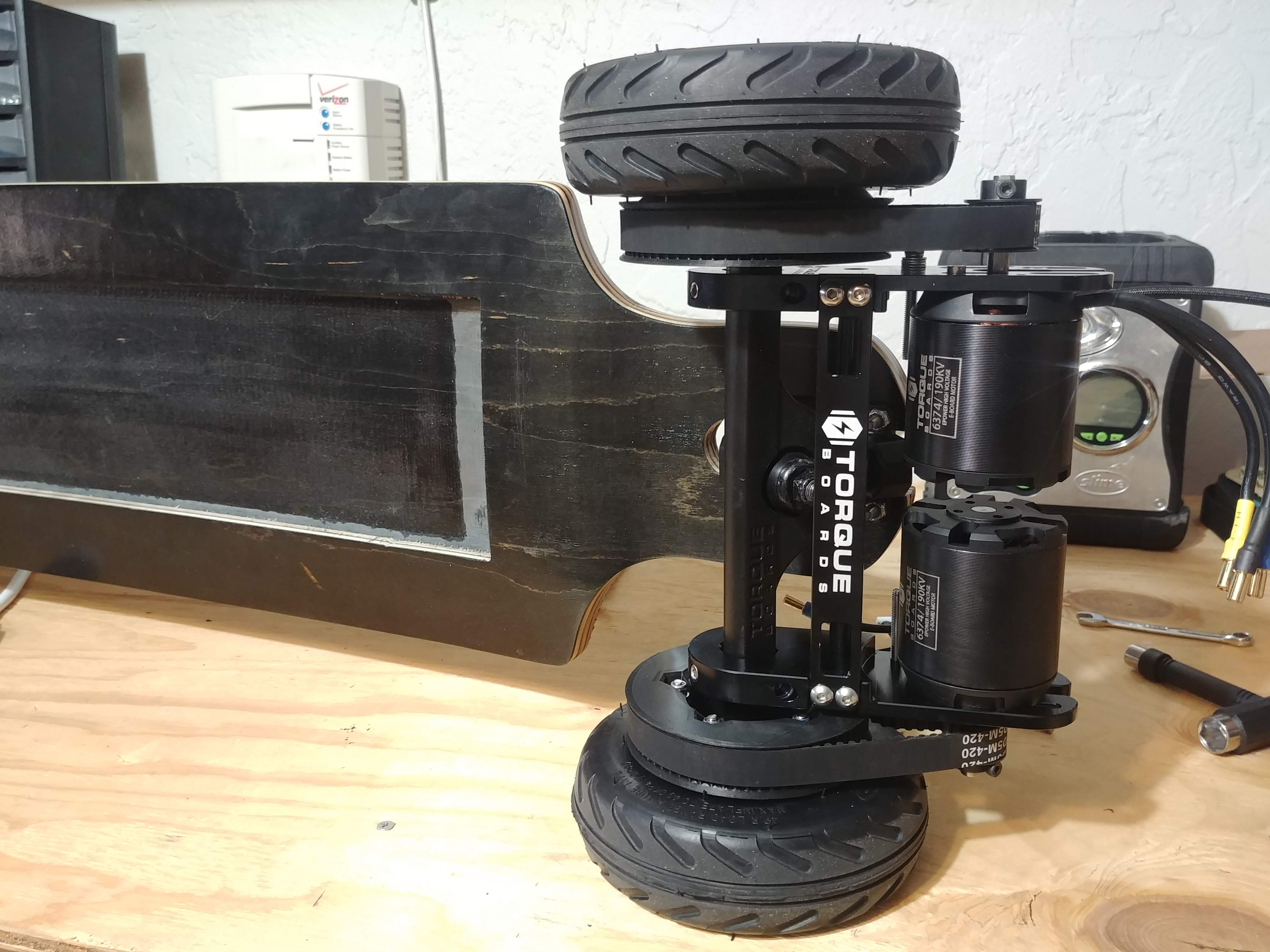 Next up is waiting on the electronics (focbox, and the nanox). I have 2 6s 16000mah lipo’s from my onewheel booster project that are now unused thanks to two-x. I’ll be using that to power the board temporarily while I learn how to weld a pack. For now I think I’ll get one of those waterproof plastic hard cases and mount it trampa e-board style on the back.

To be continued… Obviously.

Welcome back, in this installment we make it go.

First thing first, we gotta see. Shredlights installed, needed another hex spacer printed. This is when I found out the filament I got had a very bad section, within 2ft of filament it ranged from 2mm to 1.1mm. For those who don’t have a printer, this is really really bad. I stayed up till 2am getting it to print right again, and I still need to finish calibration. Whatever, I got my part printed close enough. 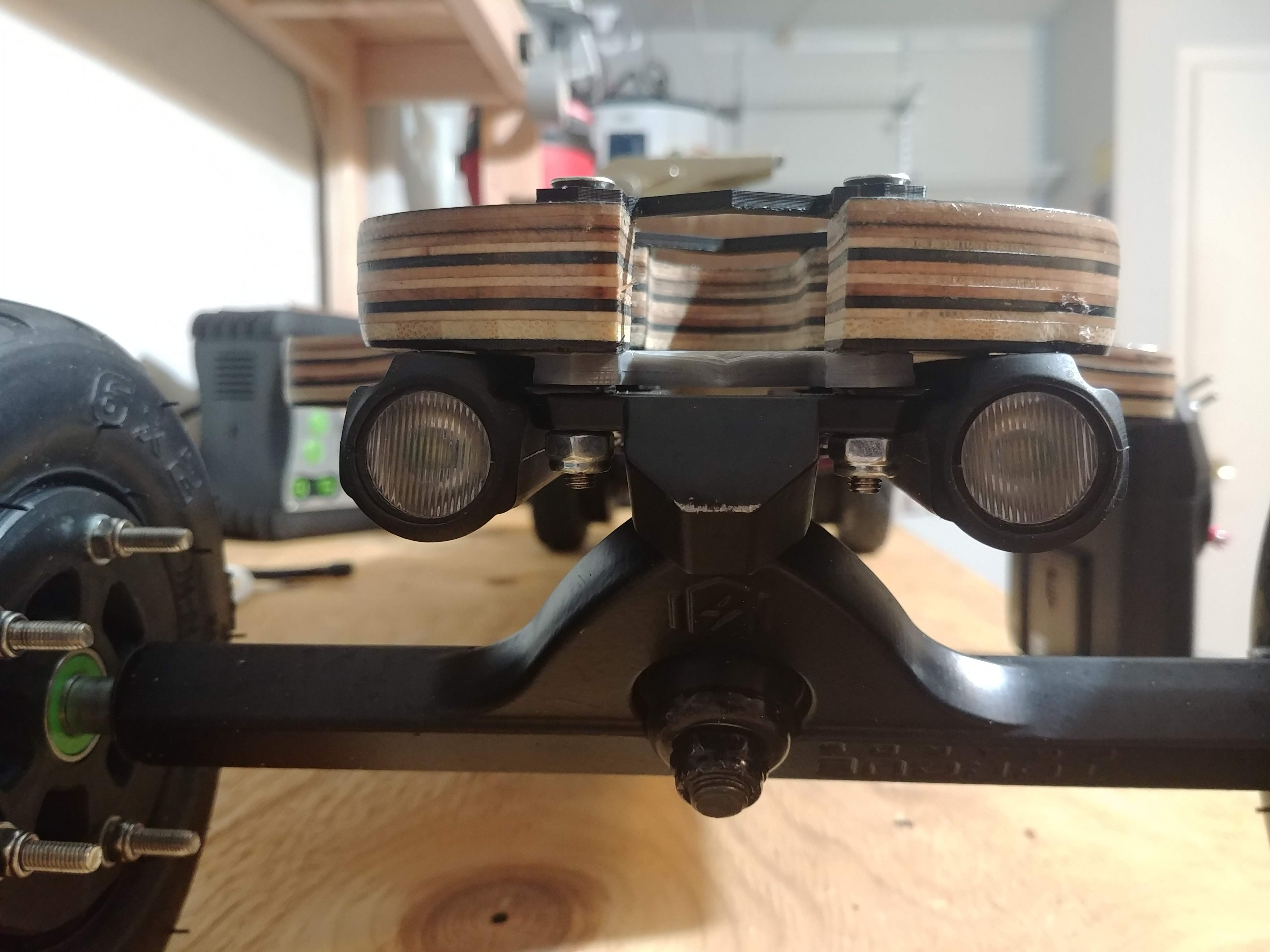 Next up is the enclosure for the focboxes, also printed (before the printer screwed up) 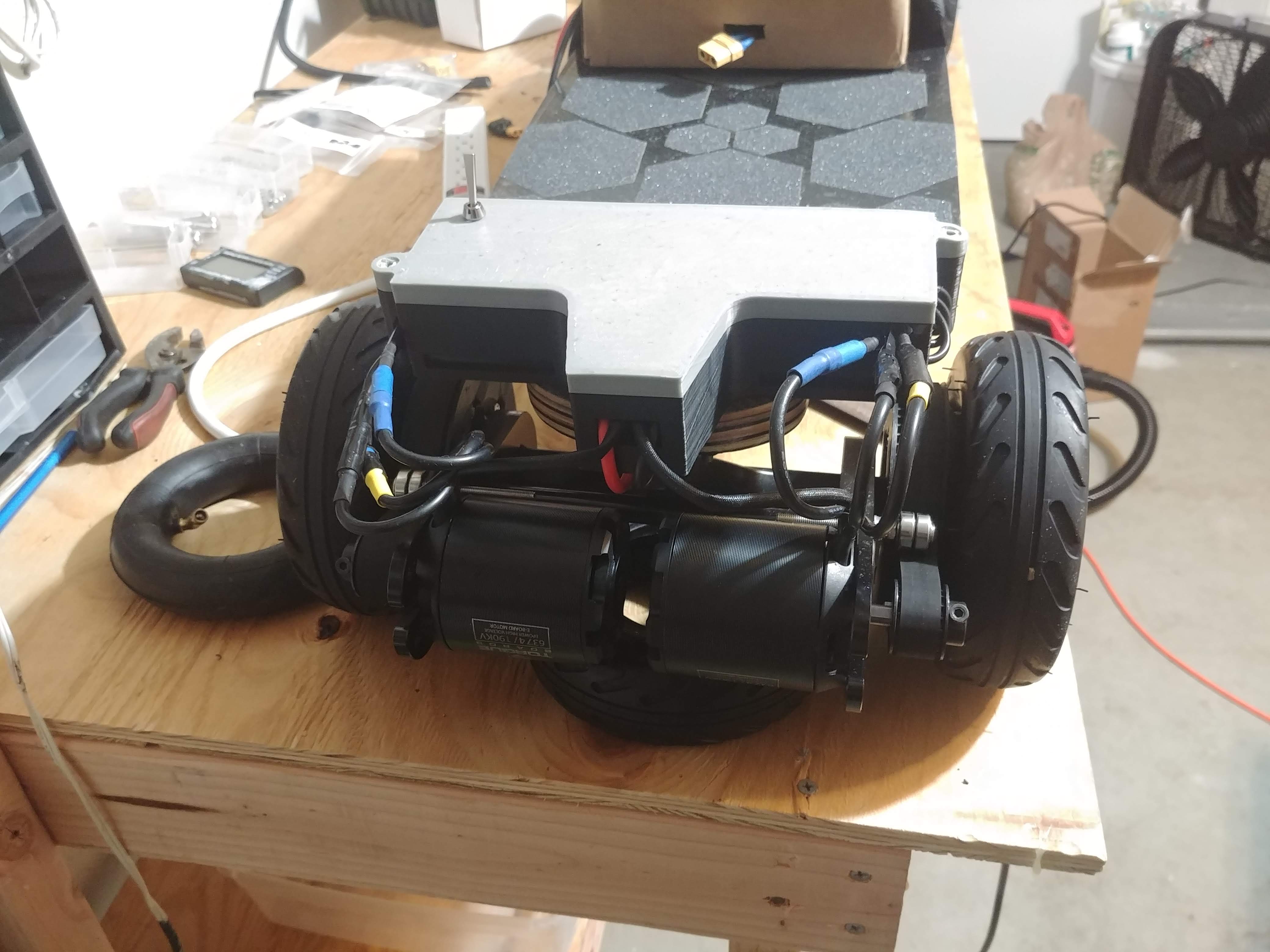 And here’s where the project takes a nice detour toward janktown. See, this isn’t permanent, so I intend on putting batteries and esc’s under the deck like you are supposed to. I just need to build the battery first. This picture might look bad, but trust me, everything is soldered well and padded nicely. 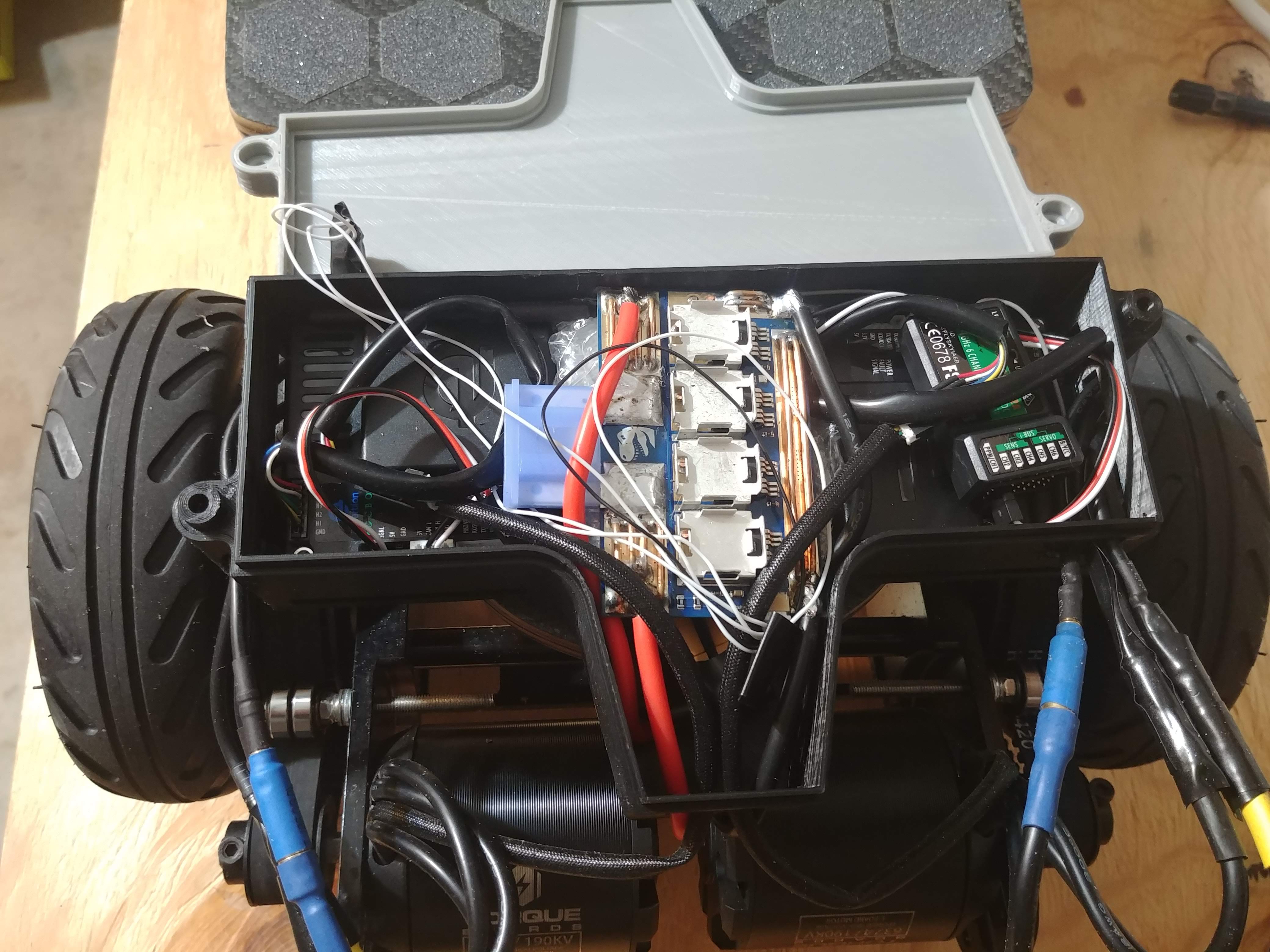 What receiver is that you might ask? How are you powering this? Ehhh see what happened was… 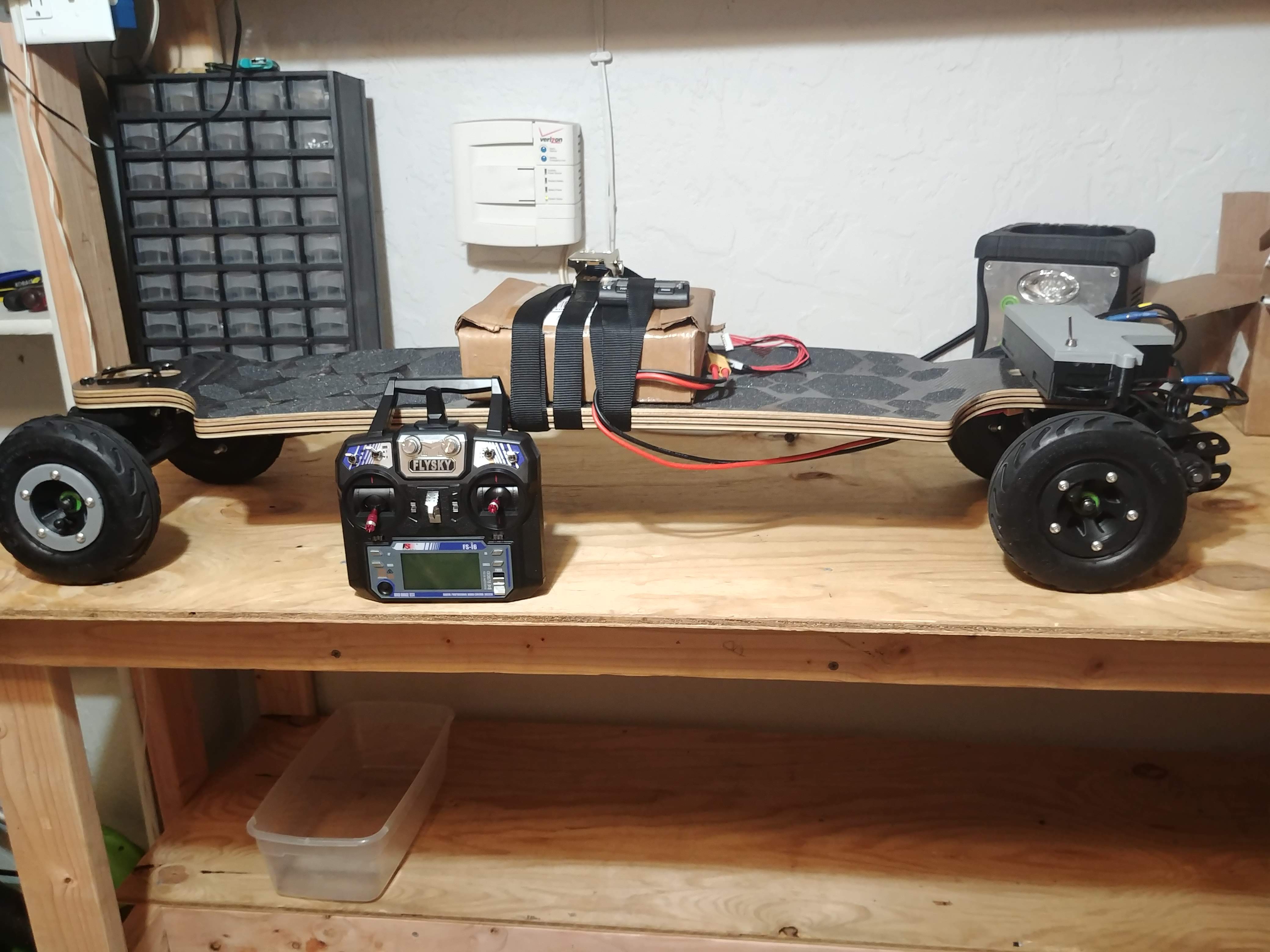 Ok look, It’s a spare remote I had already, I set up the right stick forward and back to control it. If enertion could figure out how to make a skateboard wheel, maybe my order of wheels and a remote would show up faster.

And the battery, it’s 2 6s 12000mah lipo’s (12s 1p) I had from another project (onewheel charge and ride) inside the finest enclosure. Held on with an ikea tiedown. Battery meter attached to the top as well. 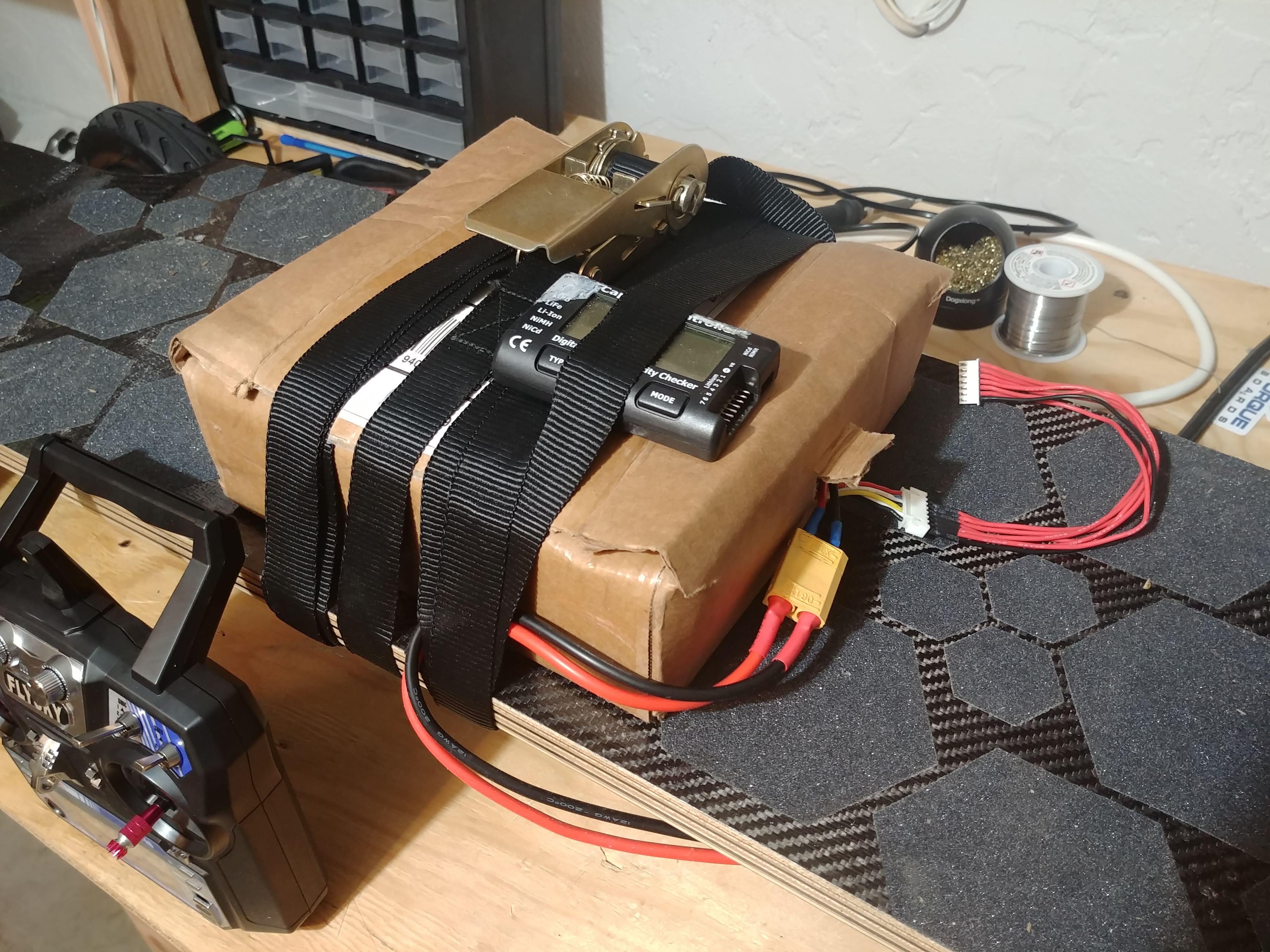 Does it work? Of course it works, I’ve got about 8mi today of testing it with default focbox settings. 40a is PLENTY on the street, but it has a bad time once you venture into thick grass. Maybe my onewheel just has me spoiled. I also noticed my turning circle is MUCH smaller than I remembered, then I noticed this. 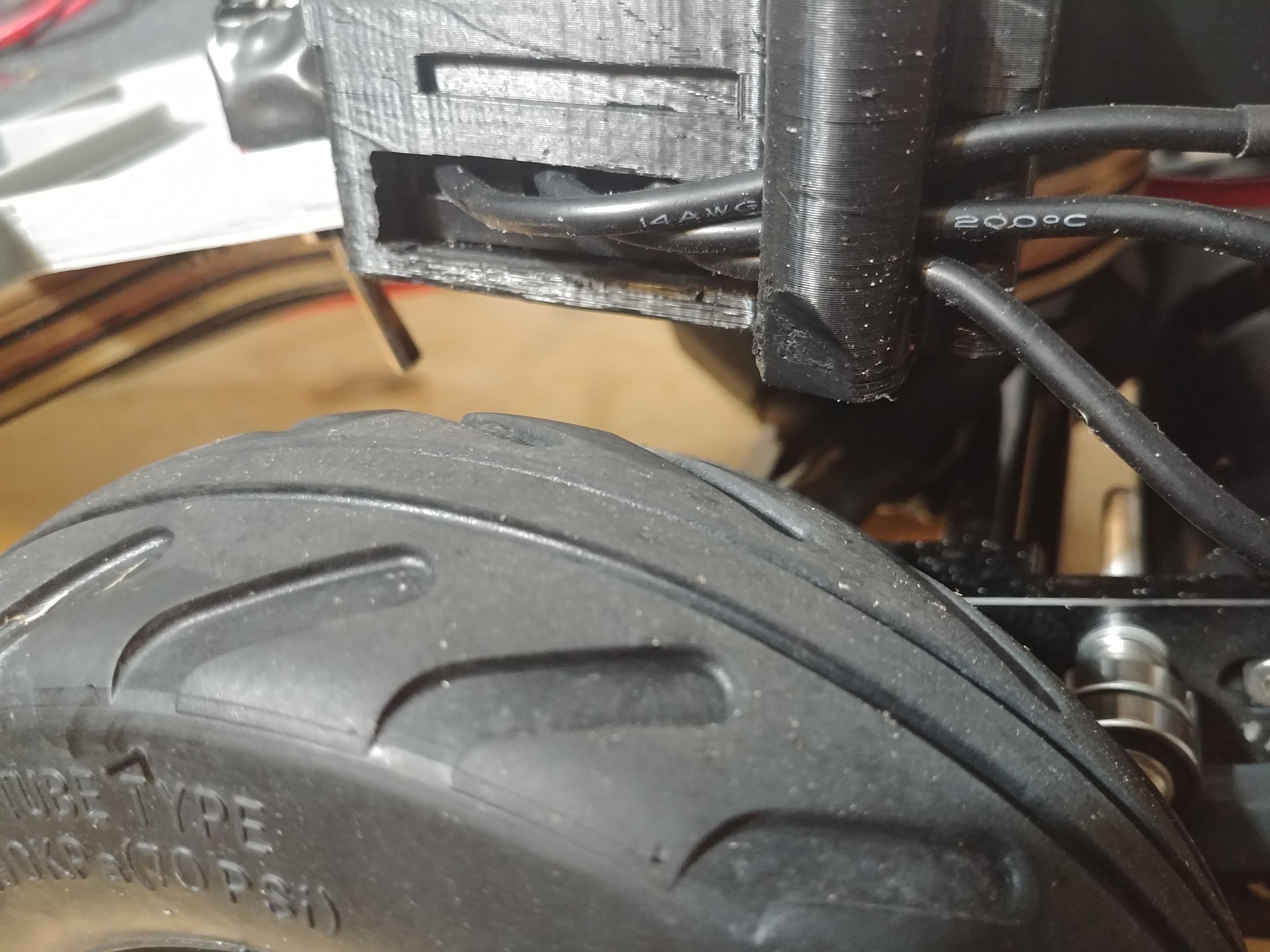 So that fancy focbox holder kinda rubs on the tire if you carve too hard. Additonaly the idler pulley screws are too long and there’s not enough bearings to fit this wide belt. So I’ll most likely remove them since I’m not going fast on these wheels. Which brings me to another problem.

These wheels were printed on a VERY cheap printer, so they are not quite “true”. It just vibrates a bit around 20mph nothing really bad. But in a few months I hope to get some real wheels (@psychotiller sixshooters FTW) along with his enclosure for this deck.

Top speed is: no idea, too scared to push it. Range is: no idea, these cheap Chinese tires keep going flat, already replaced two bad tubes, seems to be holding air fine now. Also it won’t stop raining in Florida.

Overall I’m VERY happy with the way this build is turning out. It’s got the power and comfort I was really looking for and eats up the crap roads like it’s nothing. Focboxes are also a whole nother level of awesome compared to the cheap diyeboard.com build I had before this. Sensored FOC is just butter.

I adore the name, what a classic video! I remember making those years back.

Good luck on improving turning radius. If there’s some magic trick to make it amazing let me know XD

This weekend’s projects involved making it able to turn fully, and plenty of “testing”.

Swapped the nice 3d printed enclosure for something more… Jank. 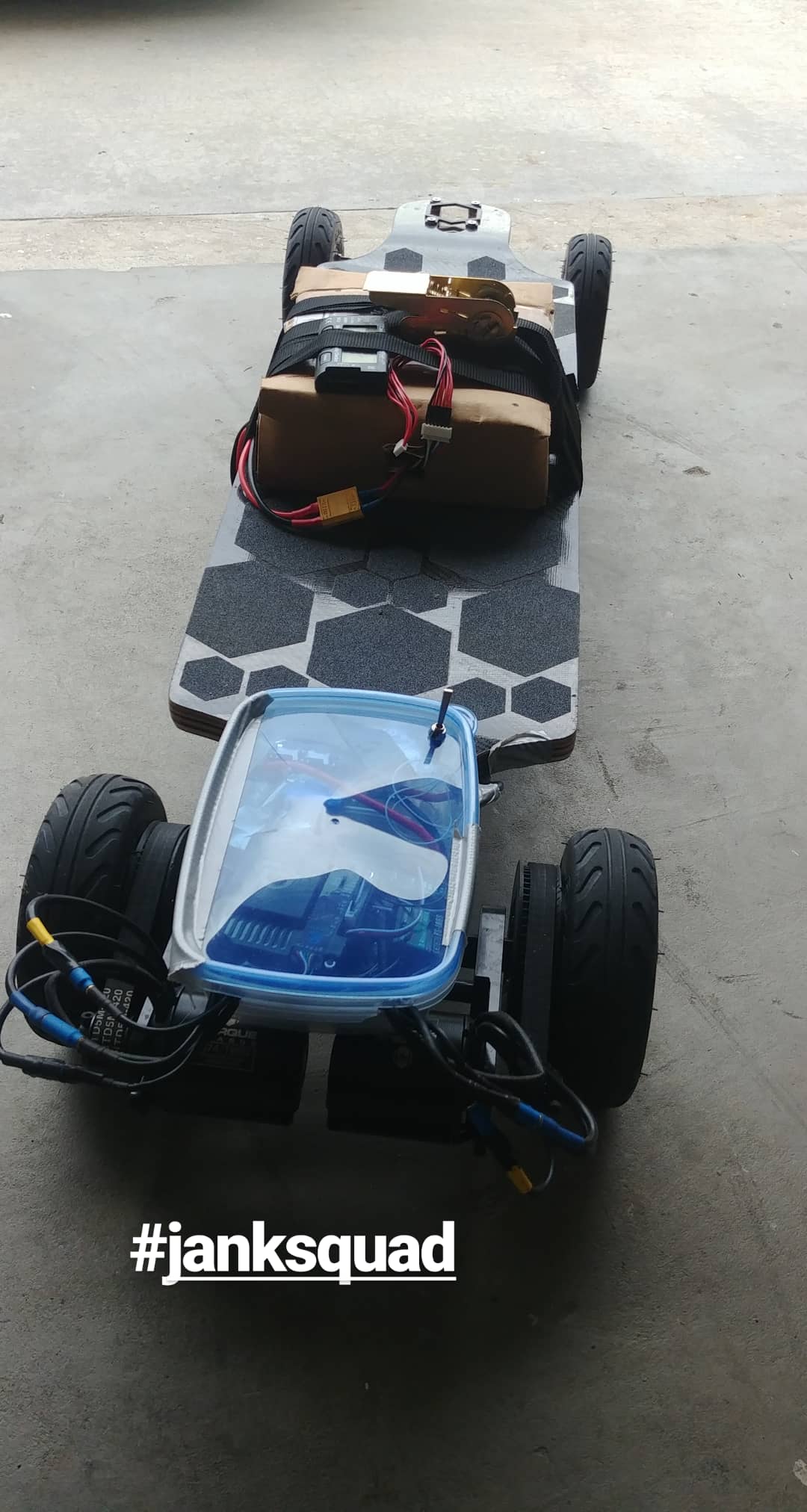 This fixed the turning radius issue. 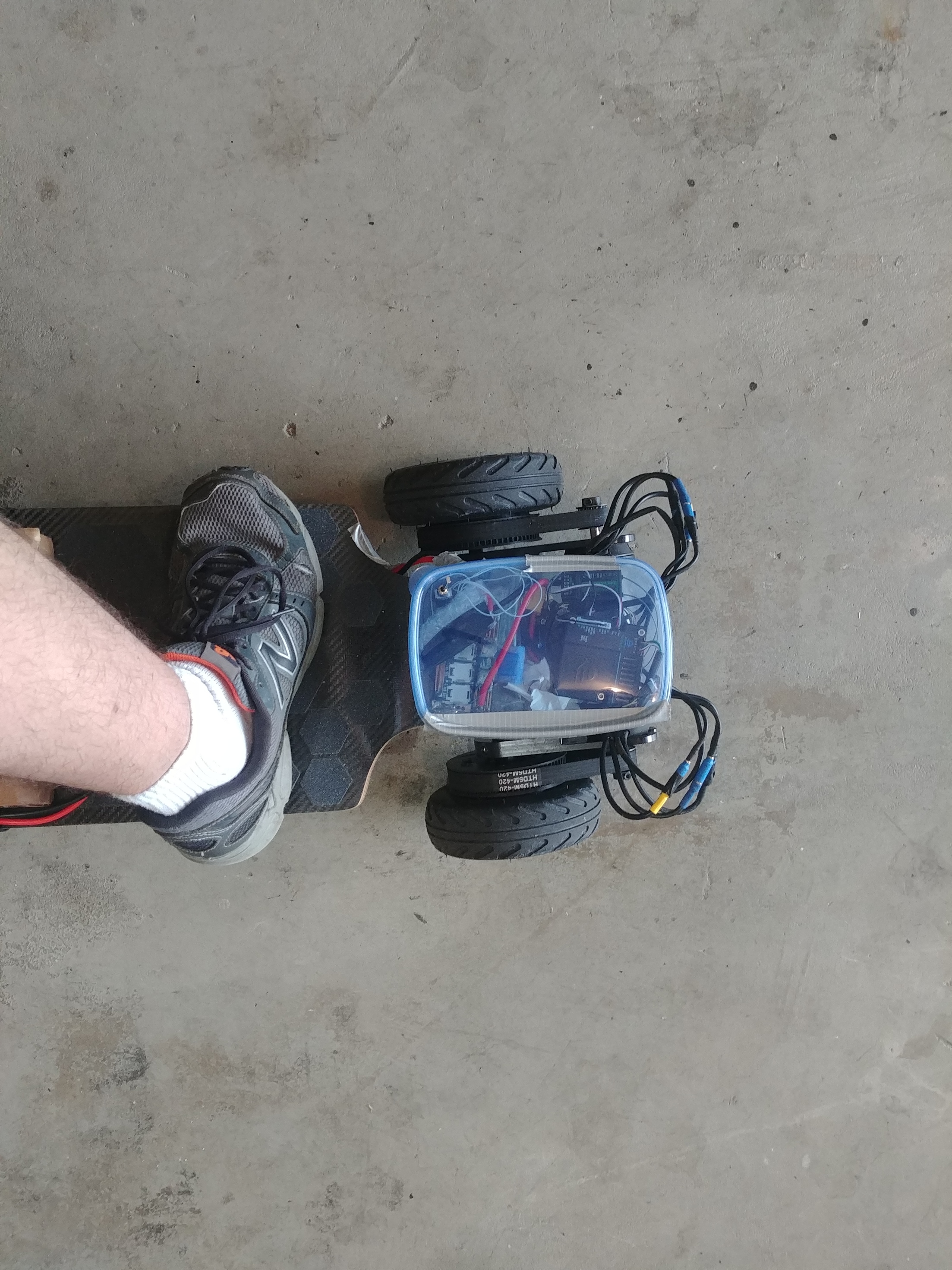 That’s it, no major updates. Just a few more pictures. 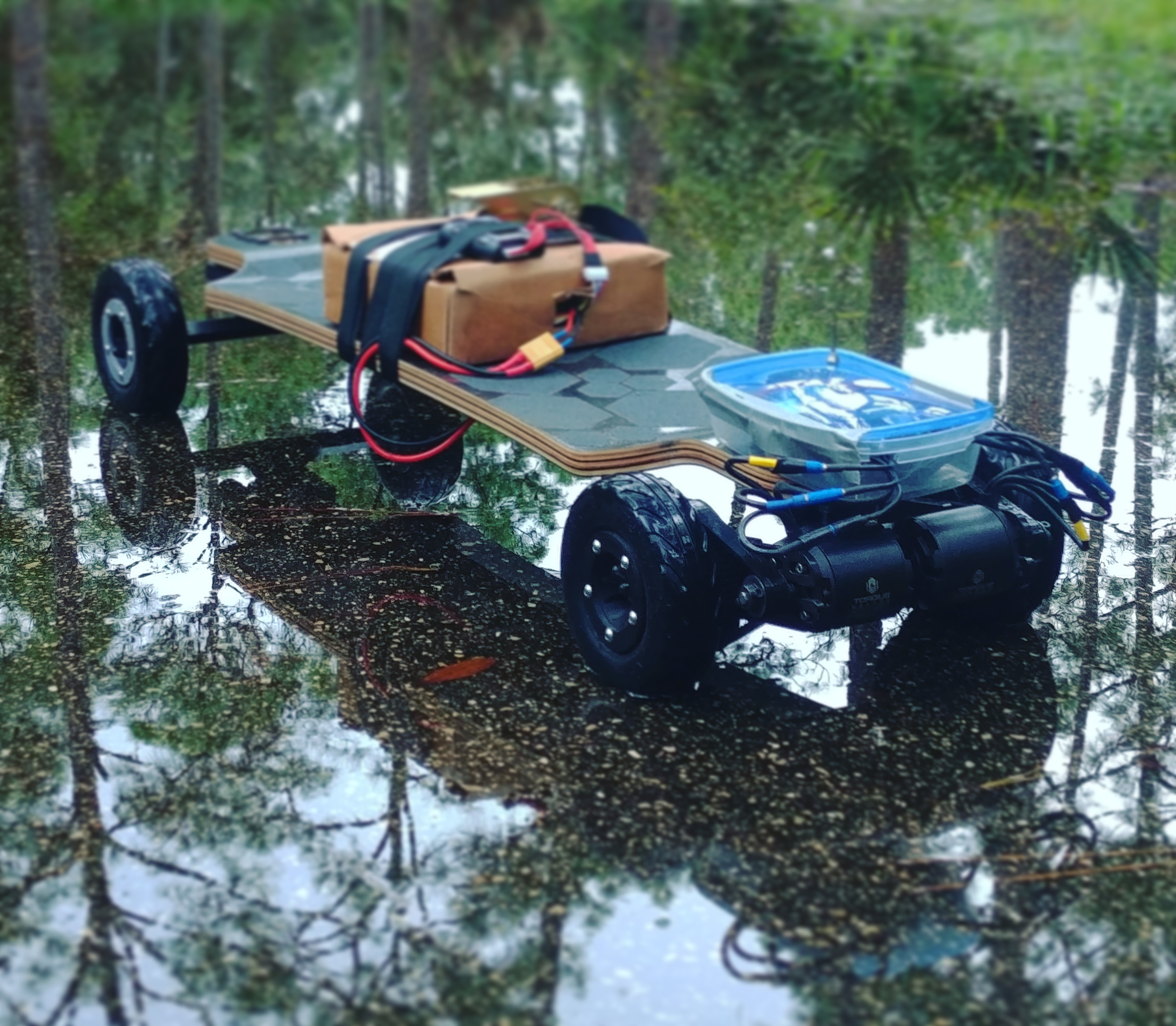 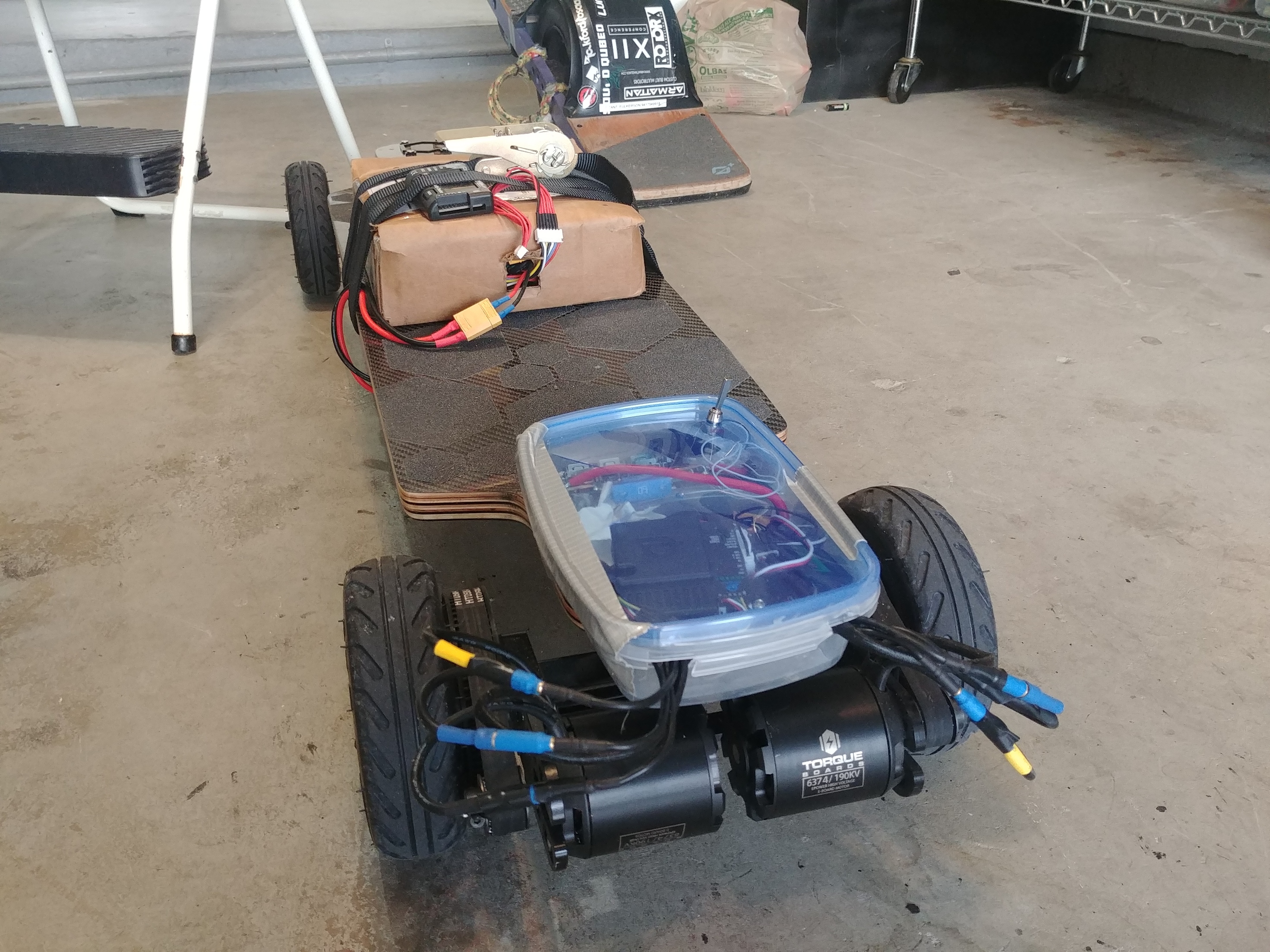 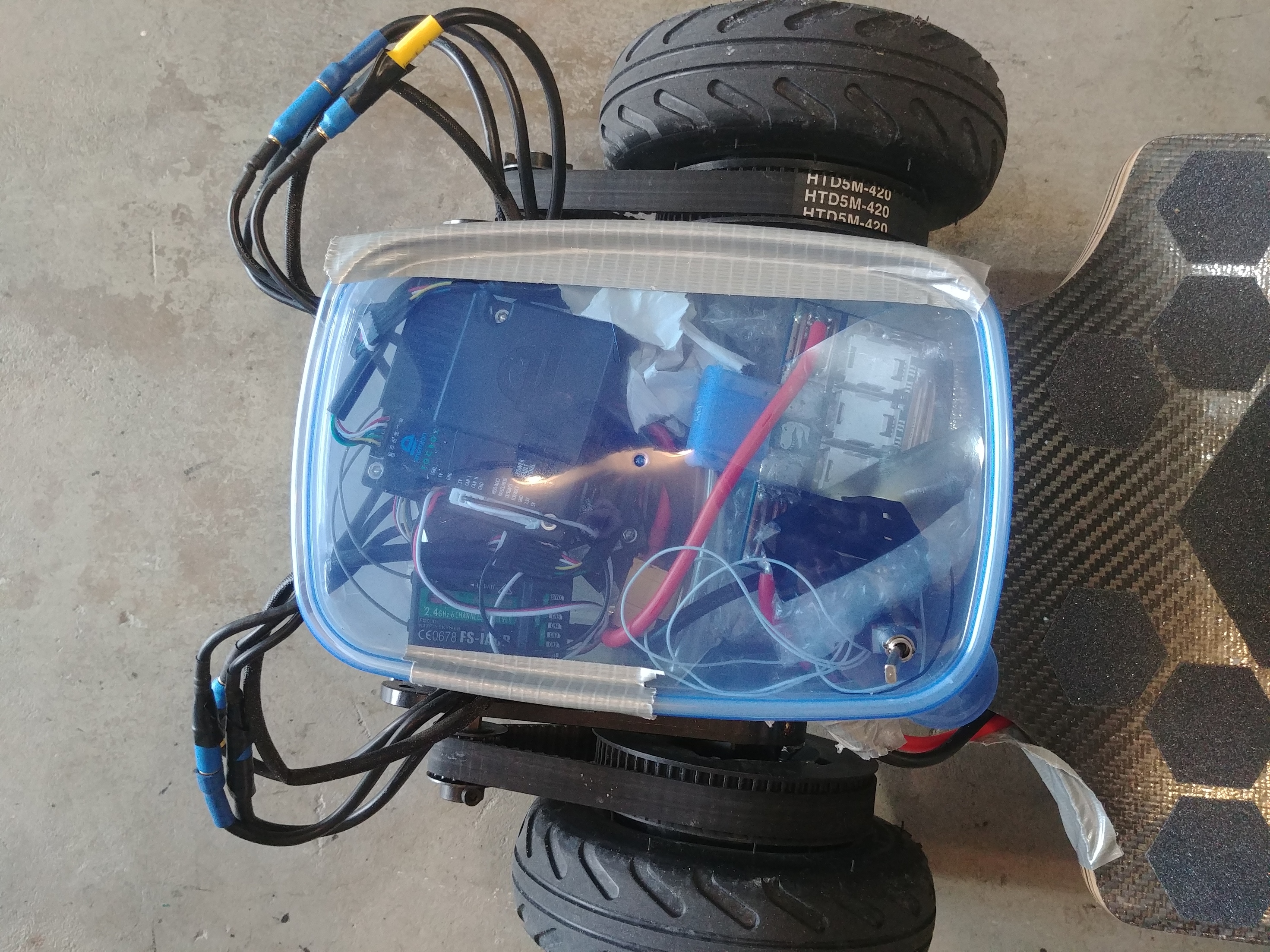 All electronics insulated and in there tight. I did have one instance where the toggle switch clicked off for a second after a big bump. So I’ll have to chop most of the end off and make it lighter. (Or get a proper switch, but I’m still deciding on which one I like. So many options)

Heat is quite low, motors get warmer than focbox. Still on 40a default till I get a proper remote and fix the idlers. Bluetooth module would be nice too, unsure if I can do canbus link and Bluetooth at the same time.

Text update. Got a standard mini remote since enertion is still taking forever with the nanox.

Find many great new & used options and get the best deals for 2.4ghz Remote Transimitter Receiver Binding Plug for Electric Skateboard Os917 at the best online prices at eBay! Free shipping for many products!

It works alright, the midpoint on the throttle is about 58%. Needed a bit extra deadband. Just came back from running to the shops, and riding around a closed golf course for a few hours. It’s still everything I ever wanted. And it’s still set at default focbox settings 40a I think.

Wheel vibration is not currently an issue anymore, just needed more pressure in the tires. The roads around here make more vibration than a little unbalanced wheel.

If anyone out there is looking at this and thinking “wow, that’s a lot of money, I’ll just get a cheap china board instead” that’s fine and all. But only do that once. When it starts to break down like all chinese boards do, start getting the parts and build what you want. Cause almost nothing off the shelf would have done what this can do. 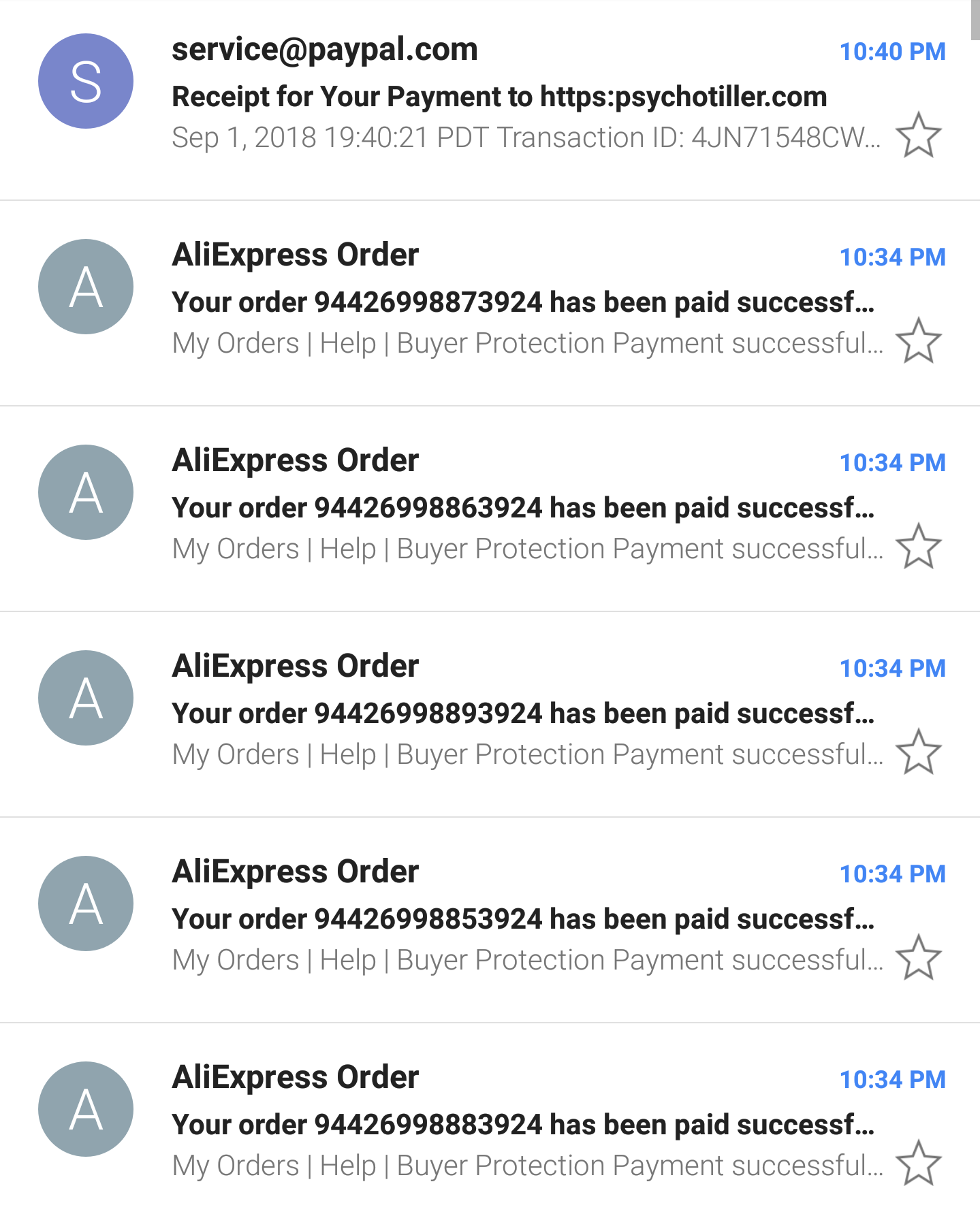 Spreadsheet has been updated. Got fish paper and kapton tape on Amazon. All parts except the cells and nickel strips have been bought. Time to finish this build up.

Printed up a holder for the P groups so they stay still and flat while I glue them together. 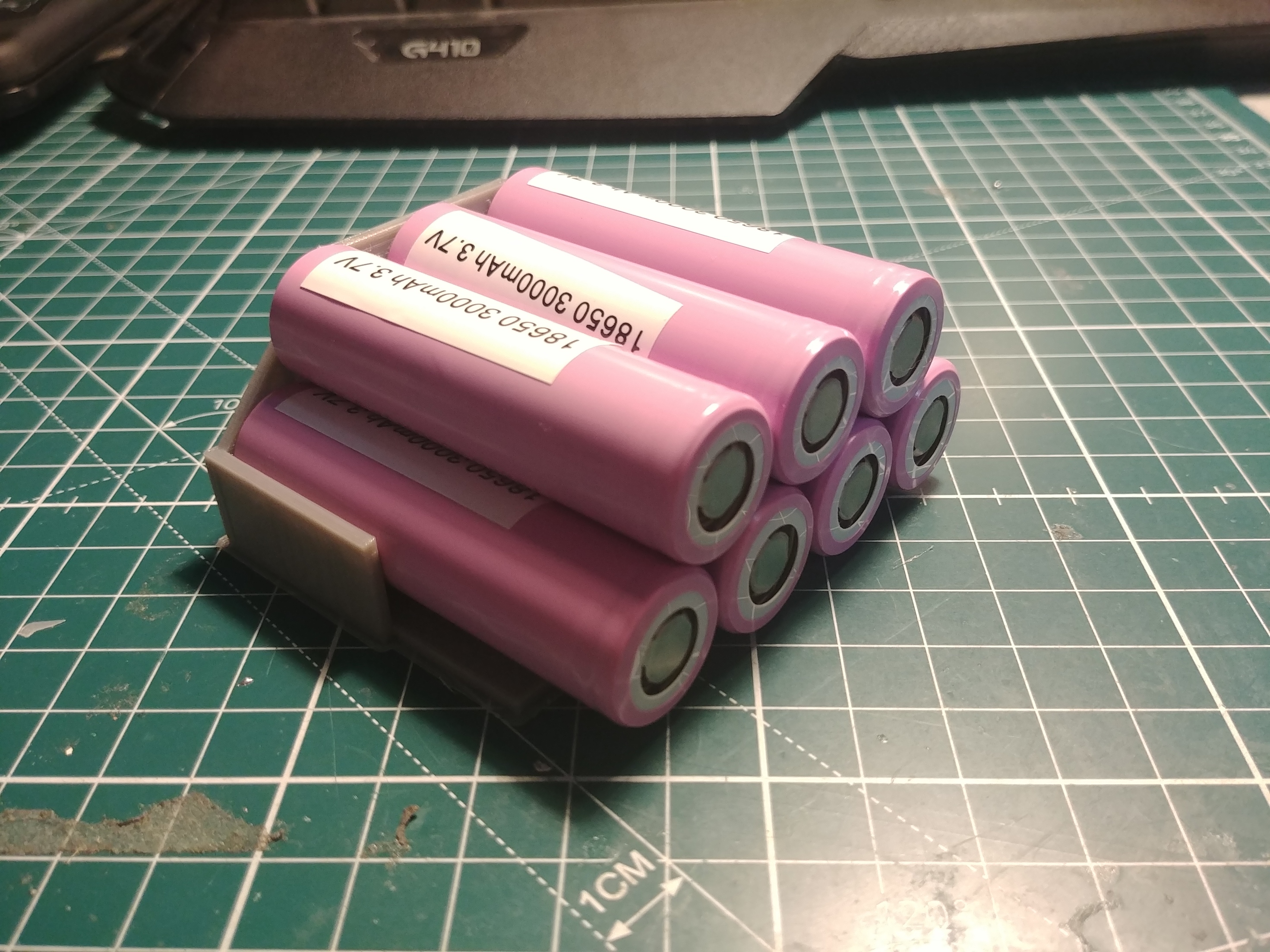 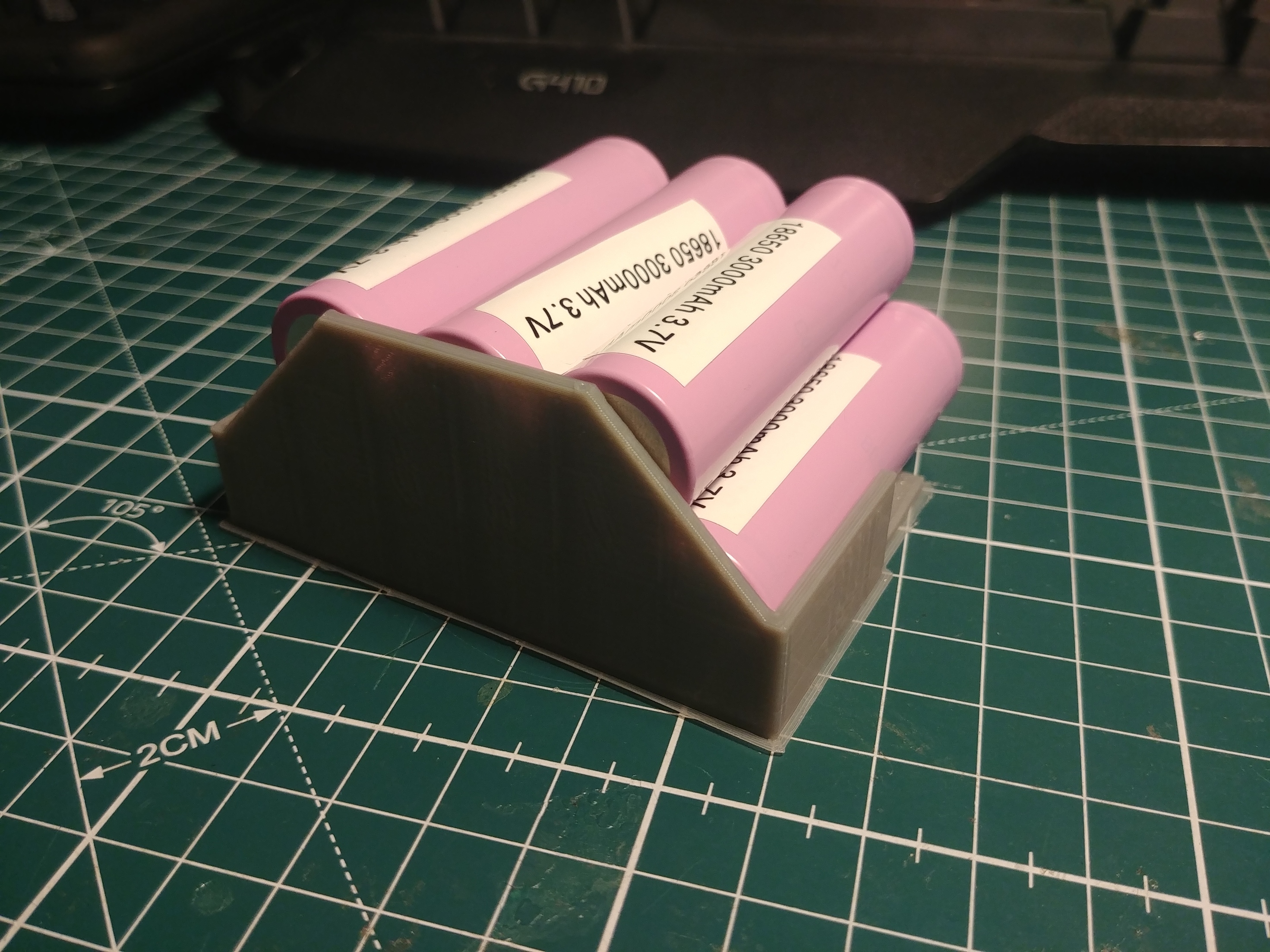 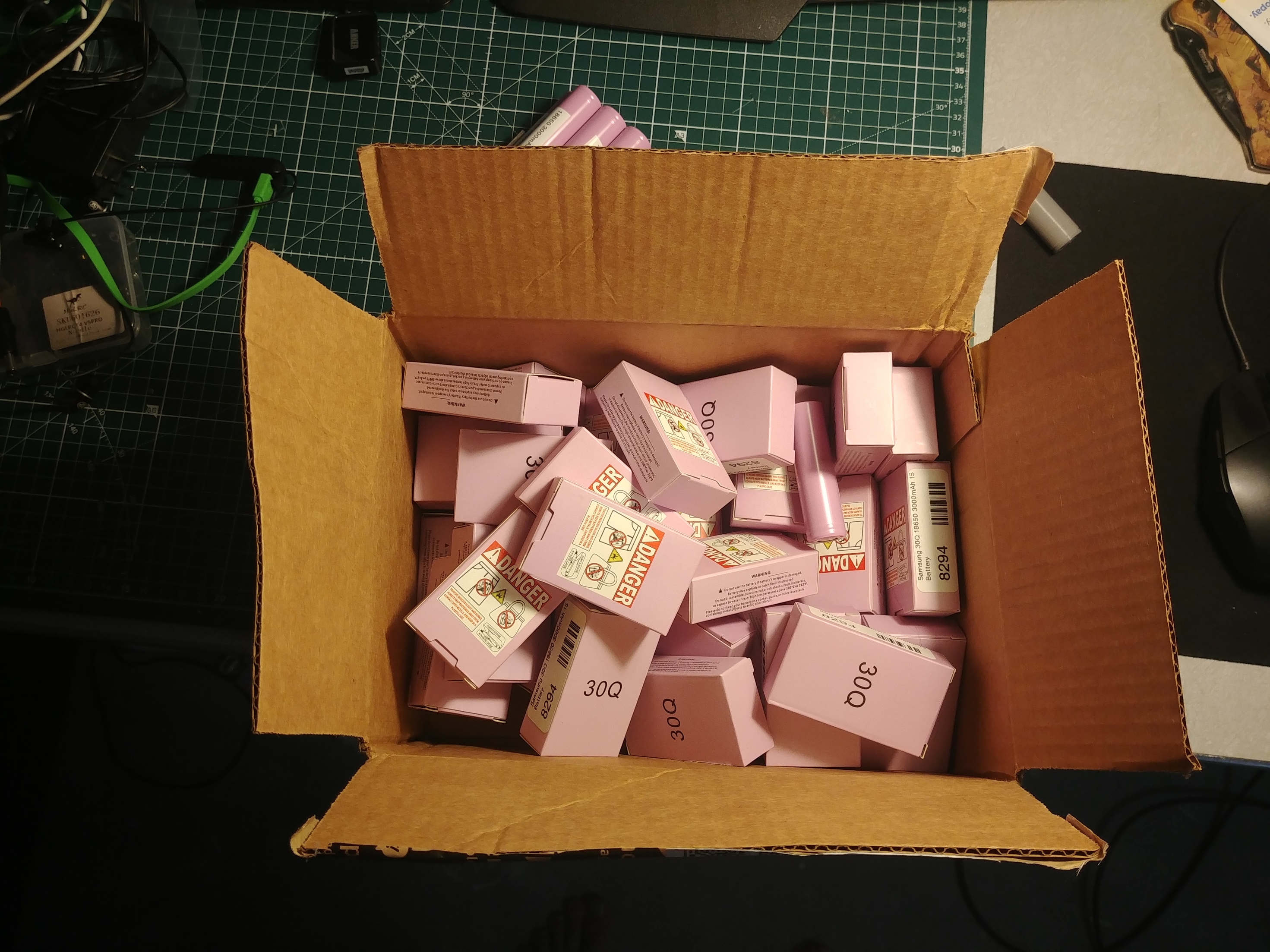 Gonna be honest, 12s7p might be a bit overkill. But who wants compromise?

I’ve been advised by some members here that I built my pack wrong. And yes, I built it the wrong way. But I insulated the crap out of everything and used plenty of foam. So let’s skip to the end of that. 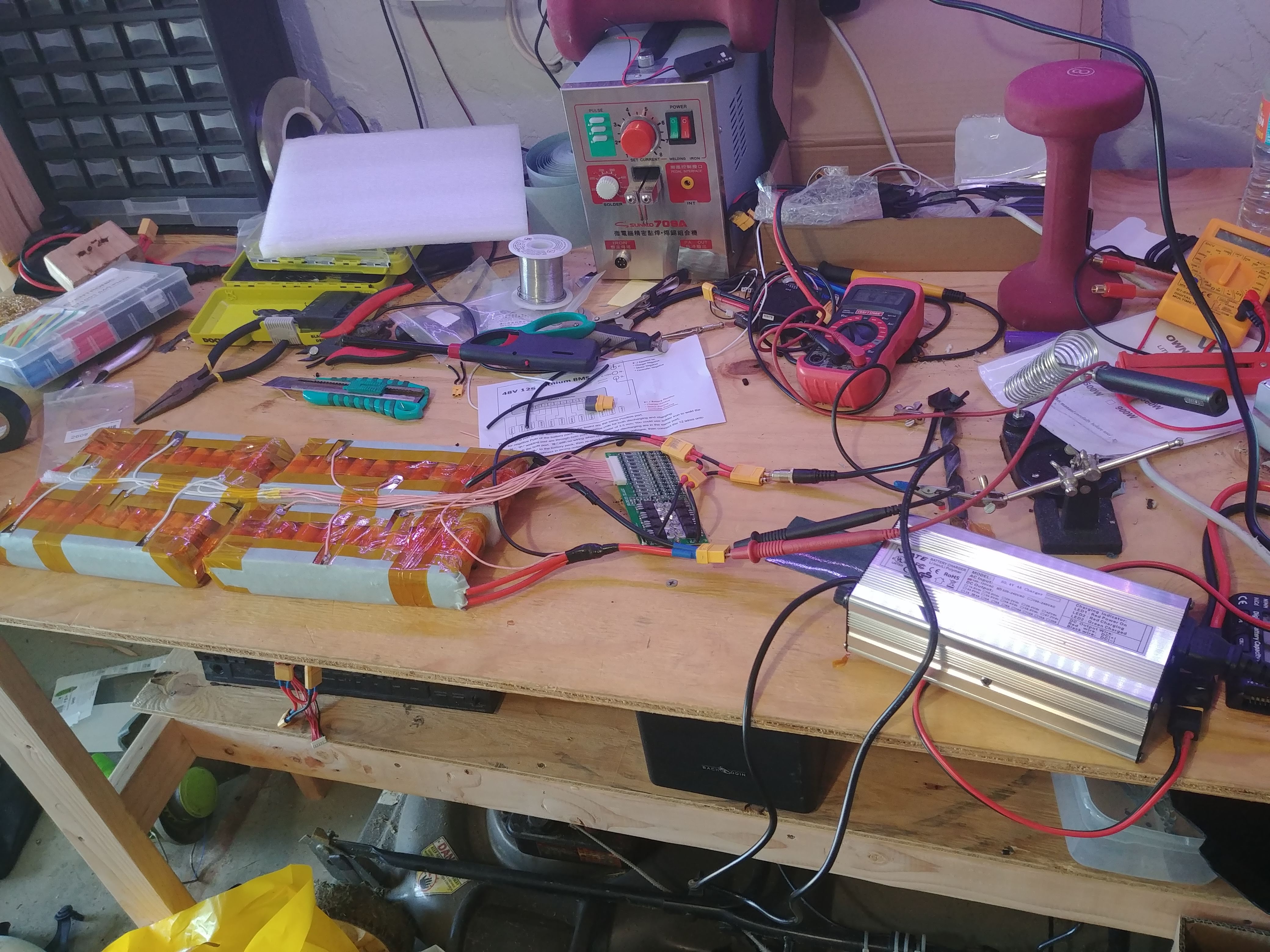 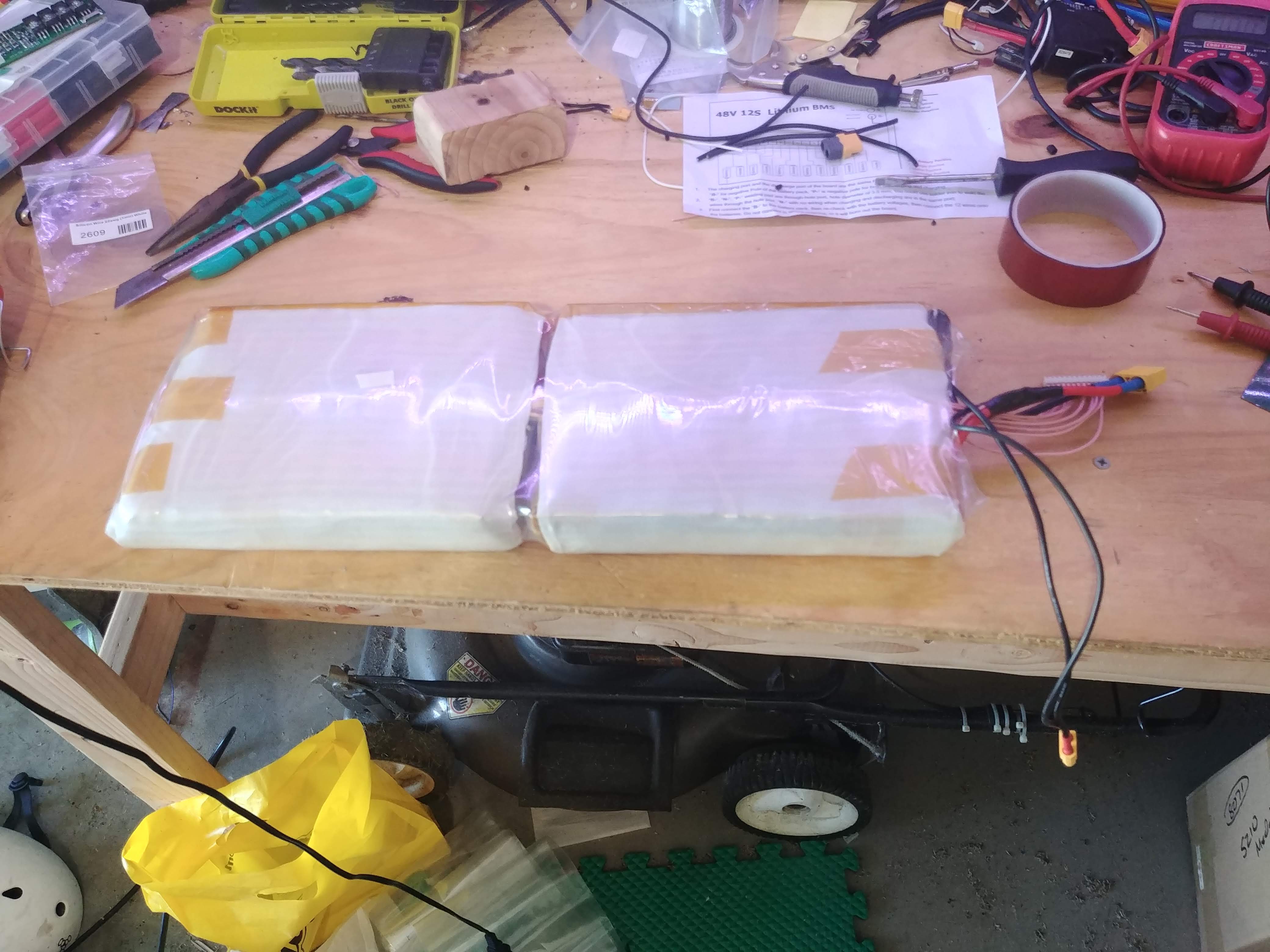 Now even without the additional padding, the deck was not wide enough to fit the battery, so I used a dremel and a side cutting bit to take a little off the edge. Enclosure still fits, and it all came out perfectly straight. 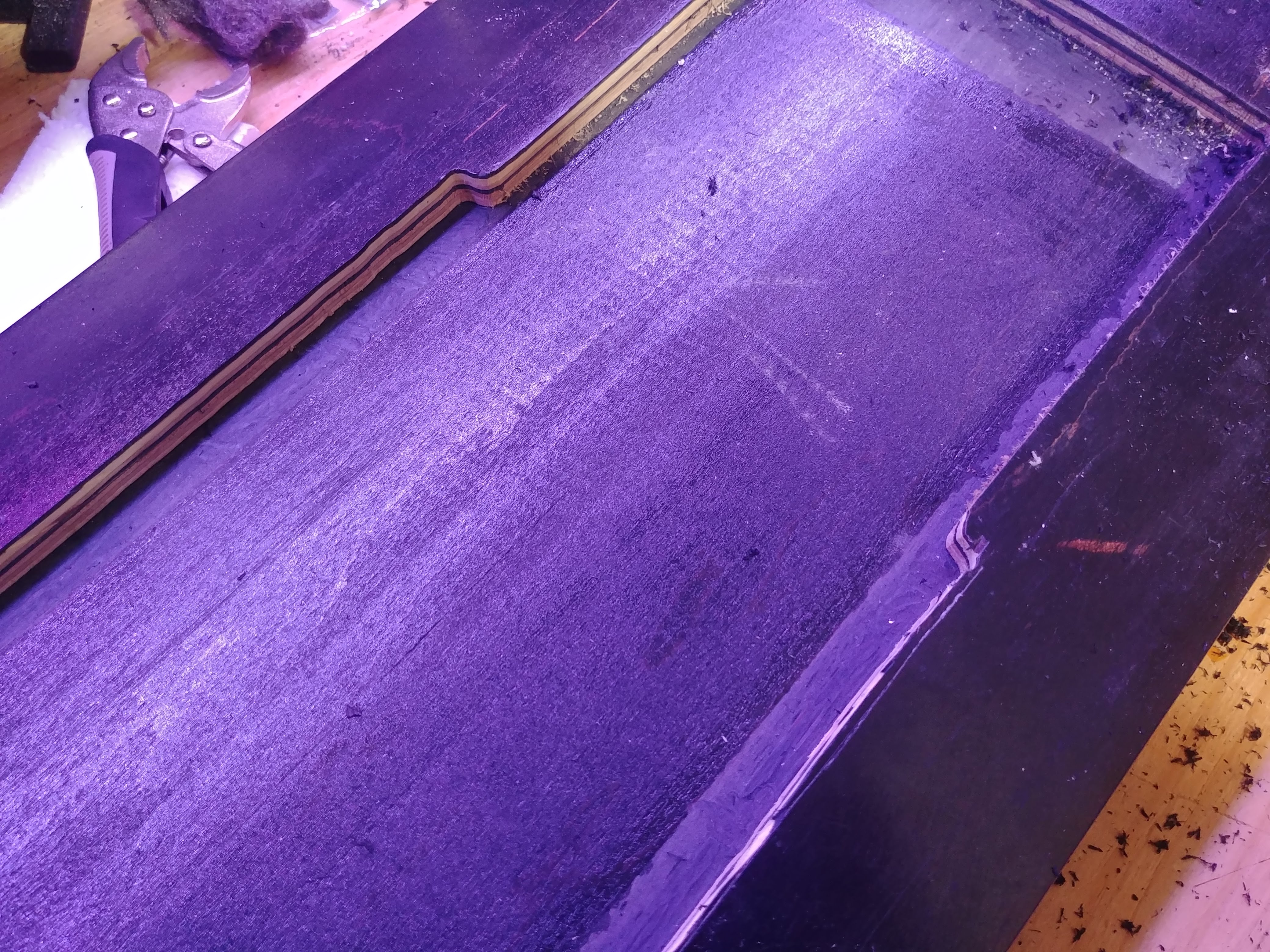 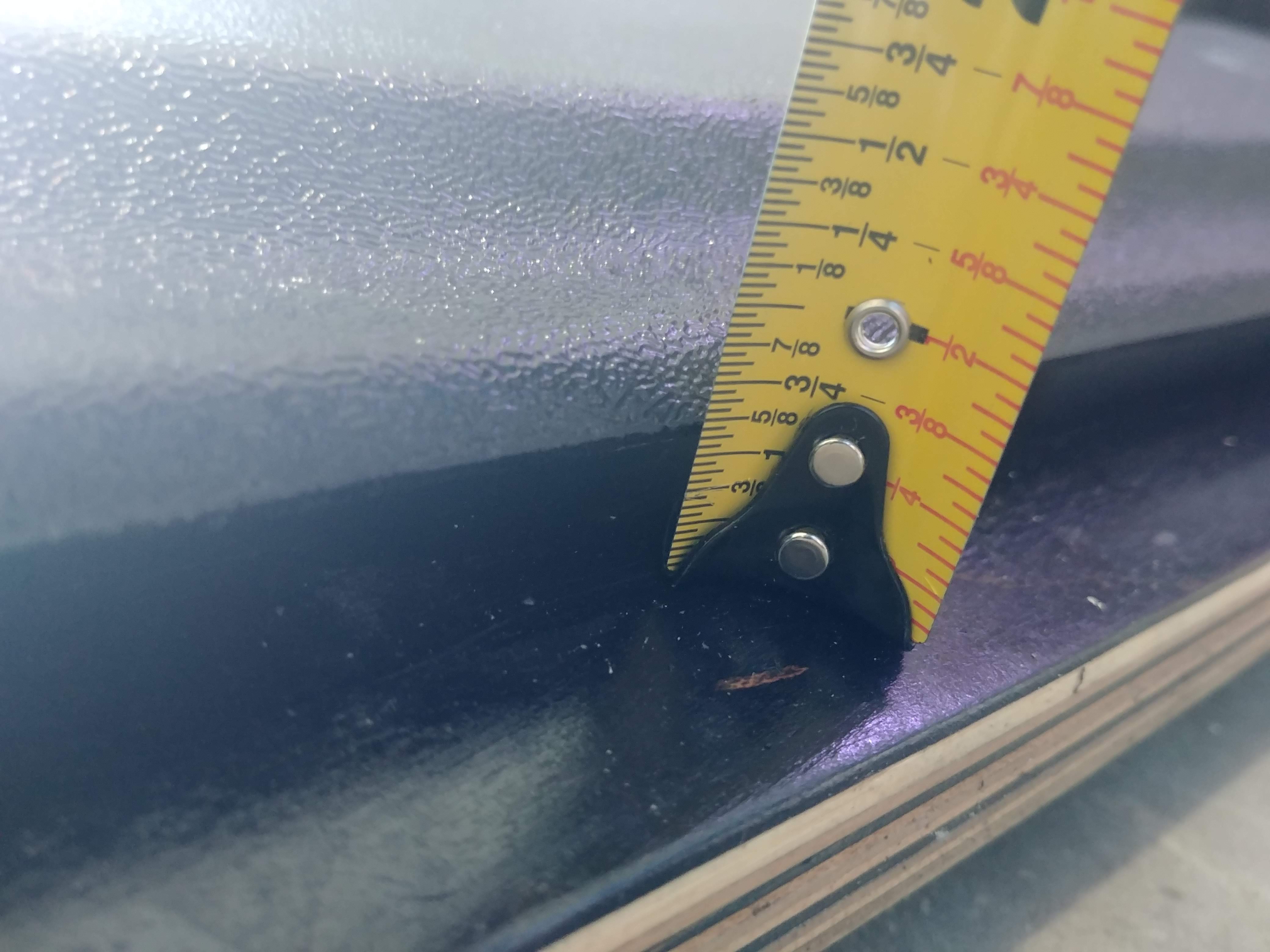 Well, there’s an issue. The battery is too thick to fit with this enclosure. Used some wood trim from home depot, black spray paint, and construction adhesive to make a lip around the entire cutout. Then some window rubber to seal it up. The added wood also stiffened up the deck quite a bit, so I guess that’s nice for the battery as well.

Drilled through that wood lip into the deck and placed some metal nut things. (I forget the proper name) But it gives you metal threads so I can take the enclosure on and off as much as I want. 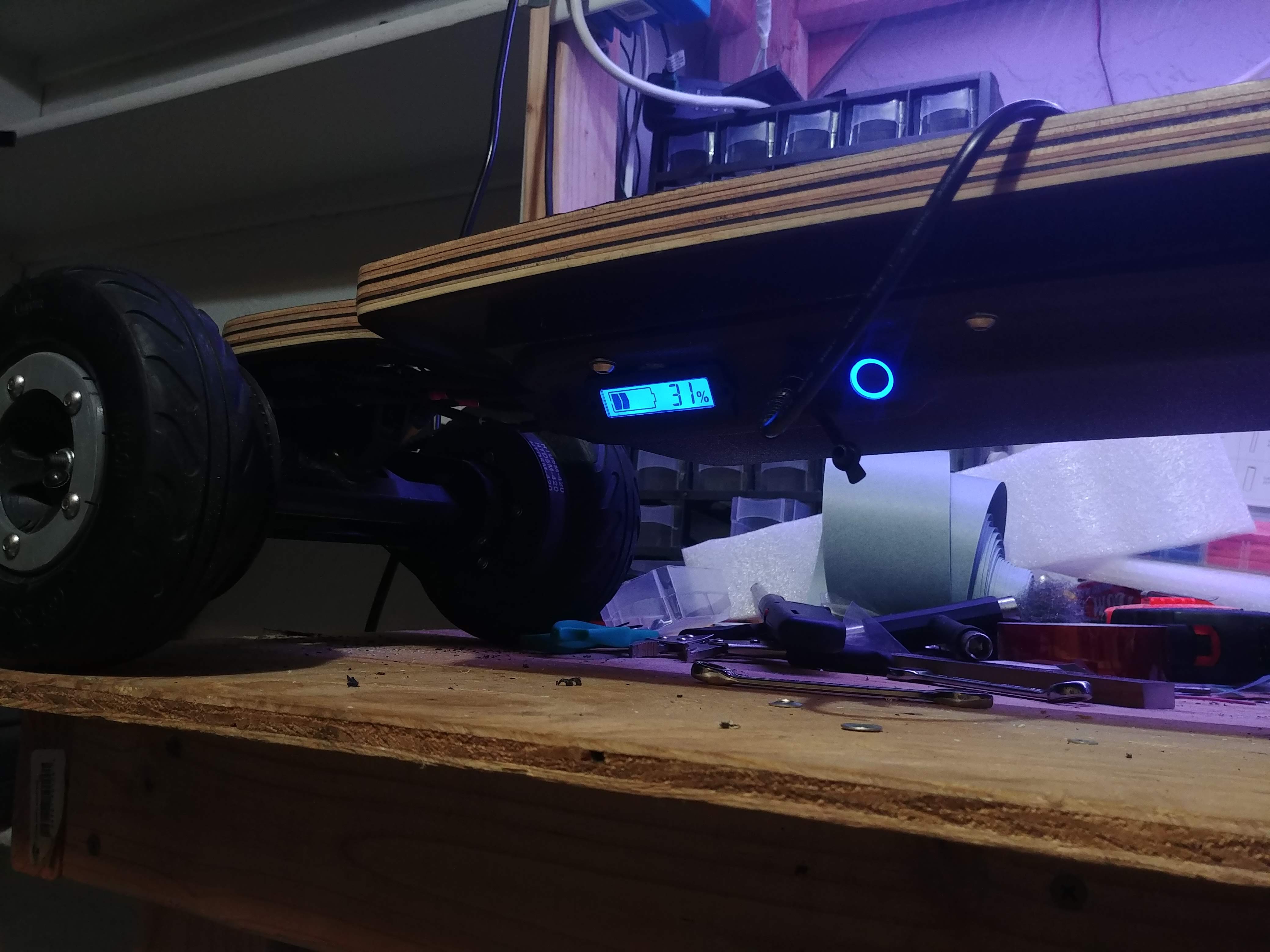 With the focbox, huge antispark switch, bms, it’s a bit of a tight fit in there. But I’ve not re-visited it much. Really just shoved some foam around the esc’s and between the bms and antispark. It’s functional, and I’ll be finishing sealing the bottom enclosure to be water resistant later. TL;DR I wanted to ride and shoved it all in.

Fast forward a few weeks and the 3d printed wheels are not doing so hot. Every 30mi or so I’d break an outer ring, that’s why the above photo has a gray ring instead of black. My printer also started giving me fits. I finally gave up, caved in, and bought the good stuff. Buy once, cry once or something like that. 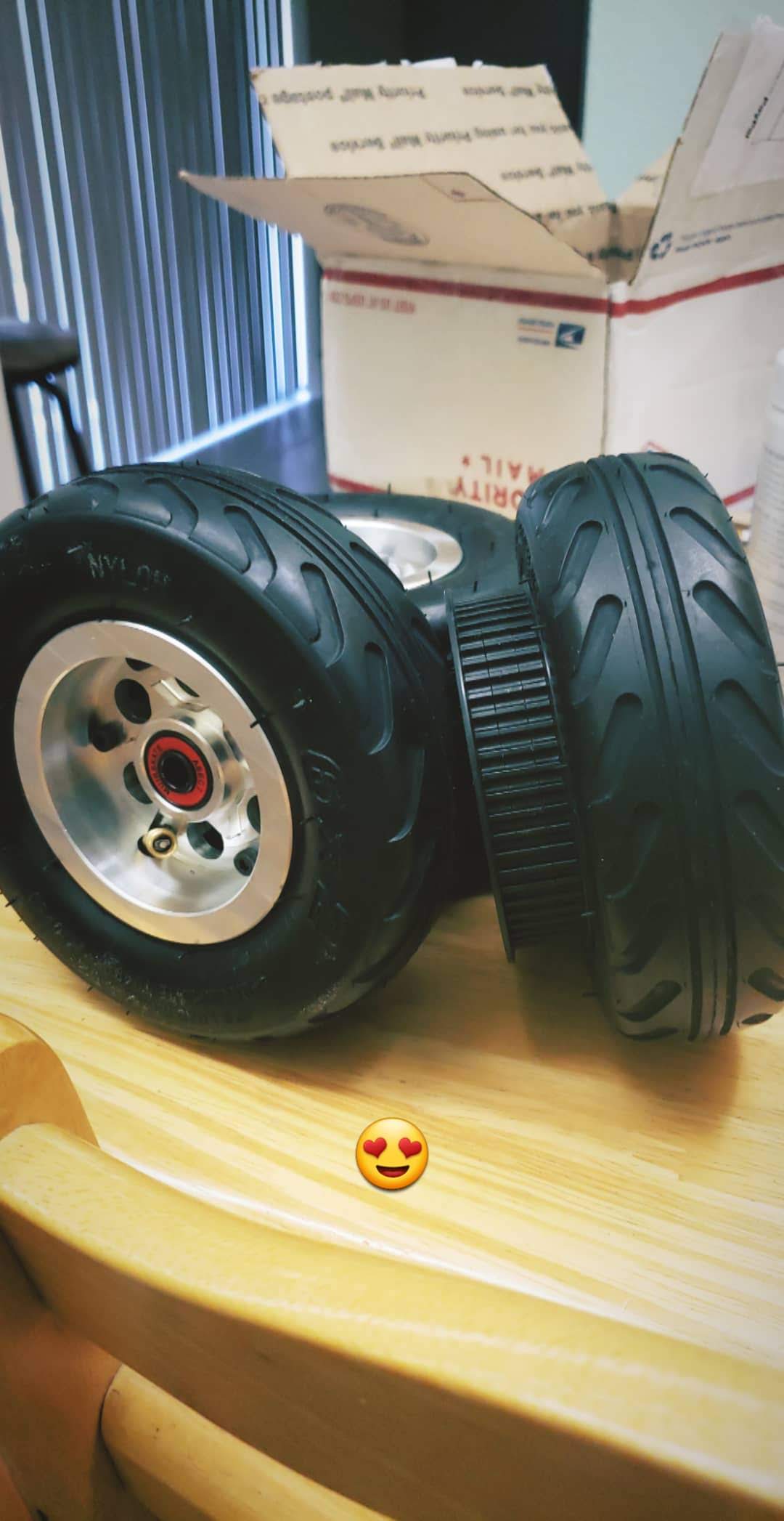 Well worth it. The ride is so much smoother, I can go all the way up to 50psi without breaking a ring.

I also upgraded the absolutely AWFUL bushings in the trucks to riptide Magnum and Canon (90a) and WFB 96A caliber II Cast pivot cups. It’s solid at speed with bumps, and still turns within the space of a 2 lane road. Magnum board side with curved side facing up/out, cannon road side. You’ll need an extra washer with a bit trimmed off for the rear truck. I don’t know what kinda stuff tourqueboards is smoking, but the stock bushings are so bad and makes the trucks feel like garbage. Valve, plz fix.

So I’ll close out this post with some more beauty shots from a 21mi ride all over town. I still have the occasional odd issue where one motor stops working. When accelerating from a stop one motor will stutter and then the board drops to single drive. It only does this sometimes. I’m guessing I need to re-run motor detection, and maybe turn off traction control. It could also be a loose canbus cable, I didn’t glue it down. 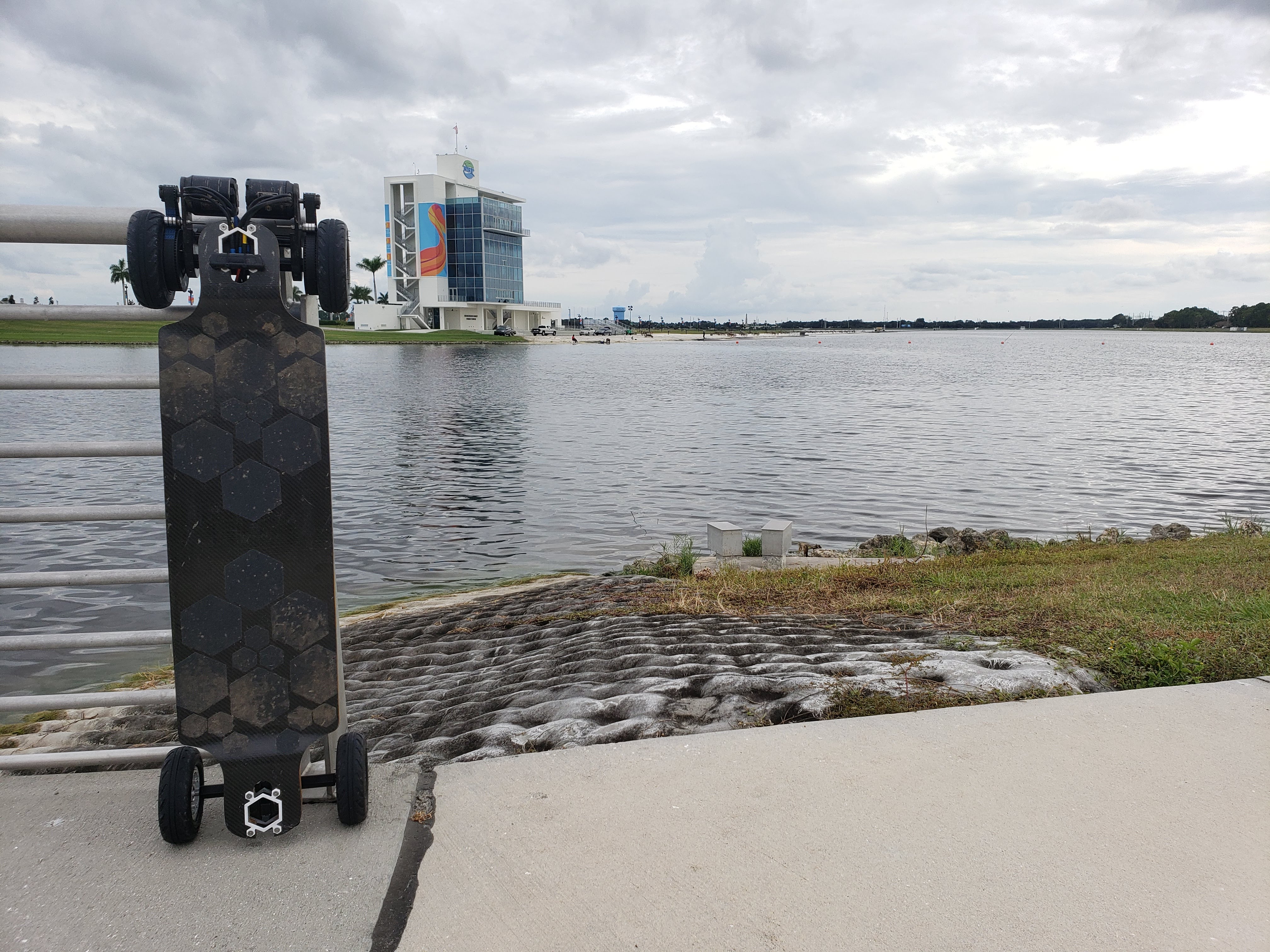 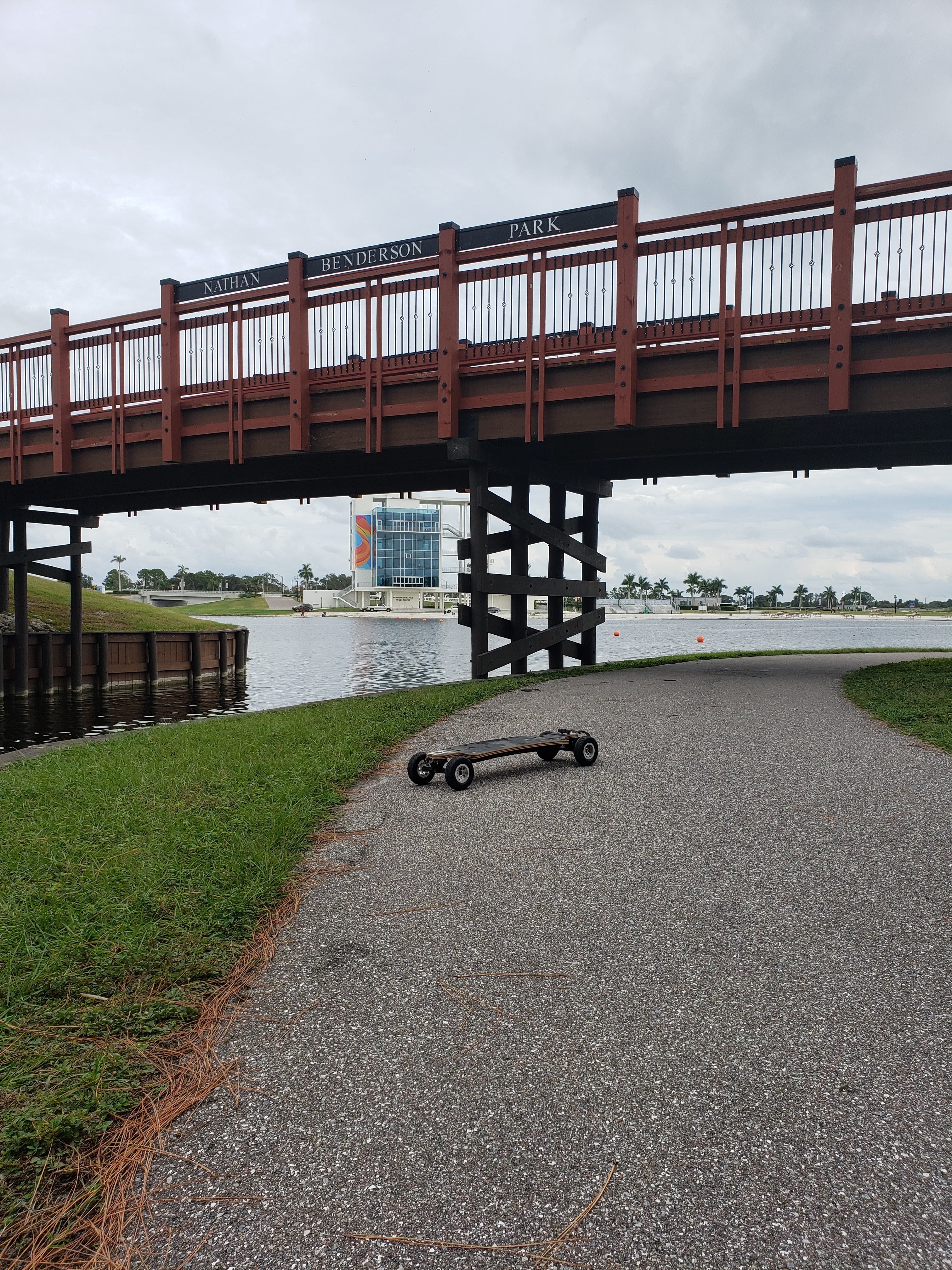 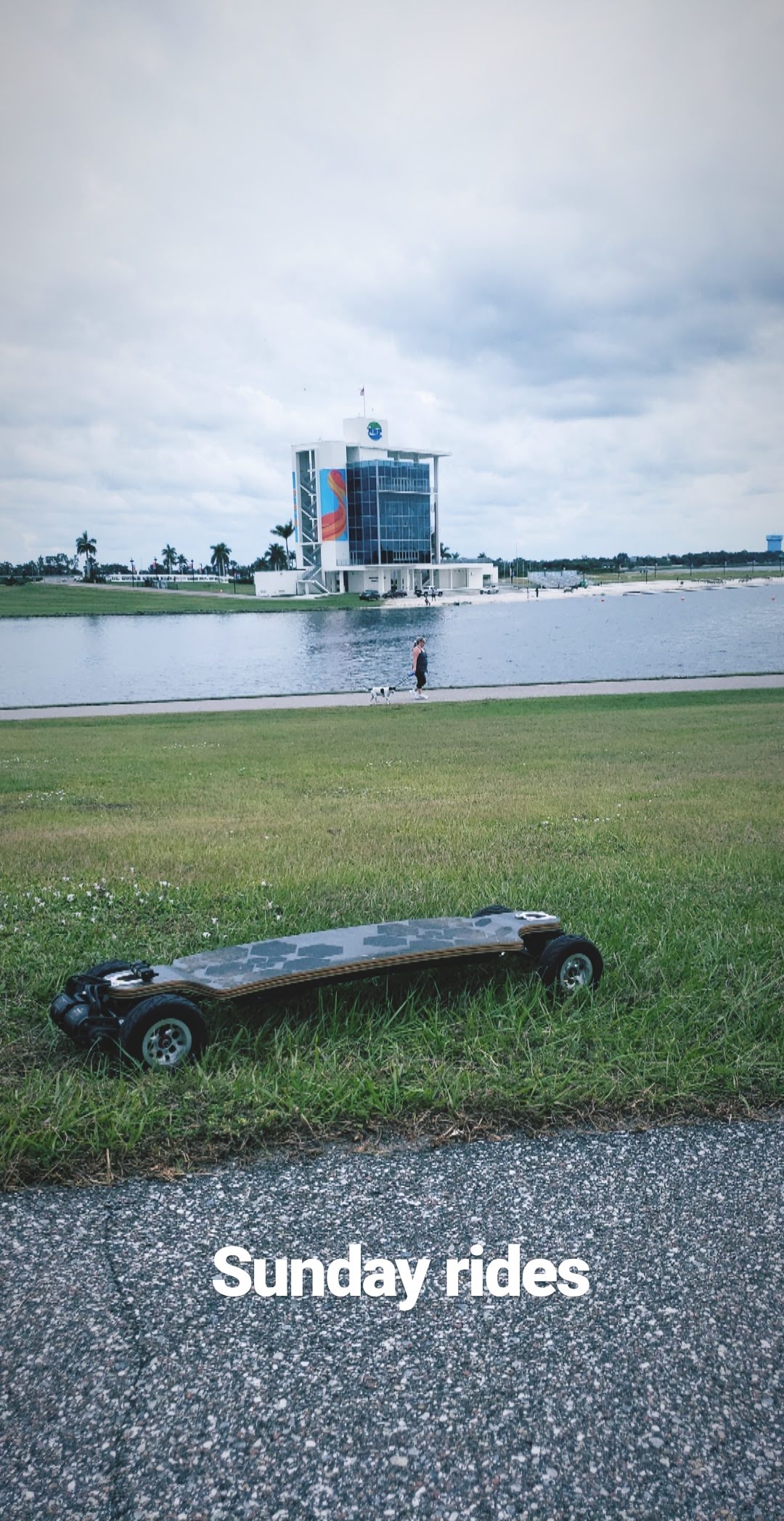 TODO: seal enclosure, mount focbox/bms/esc fully, add bluetooth, glue canbus cable, flash ackimaniac to get reverse and BT functions? Cut deck protectors from metal, cover the bottom in waterproof LED tape (Yes I’m that guy), and maybeee some other stupid idea I’ve got in the back of my head.