How to hold an esk8 race?

I wanted to hold an esk8 race in my town, but was wondering how most people went about advertising for it, and logistics. If I was going to host it at a go-kart track, I know someone who would probably let me use their track, as long as insurance and a bit extra was paid for, but also though it might be cooler to host one sort of alley kat style, around my college campus, because that it is a way more centralized location, and I could host it without having to charge admissions.

I was also wondering how to section the race off so that it is fair. I have ridden with people with evolve, and boosted, and they are just clobbered by even a dual 6355 board with max amps at 40, so if some one brought a dual or all wheel drive with huge motors and like 120 amp ecs, ect, it wouldn’t even be a race, quite franking, it wouldn’t be safe because of the speed difference. I’m really curious what the classes are. I have seen that some people just have an open class, a boosted class, and an evolve class, and an open class(for diy) but I don’t like the idea of excluding diy form classes, though it may be the best way.

I was also wondering if anyone had ever seen an alley kat style esk8 race, where there are no regulations, and no real course setup, it is just race from point a to b. It seems like it would be cool. Or maybe this is a bad idea, it does sound like an easy way to get esk8 banned. Perhaps sticking to a go-kart track where they will of course get insurance would be better. What do you all think?

(also, if there is already a thread for this, let me know and I will pull it, just didn’t see one, but would think there would be one)

the last race I saw video on here was done on a gokart track and the max speed obtainable was 25mph even with supped up boards. I think such a tight course is much safer. coming off at 25 and getting hit by a loose board at that speed happened from what I hear and the rider was alright but at much higher speeds it gets heaps more dangerous. he was alright and the board hit his helmet. or maybe you could do a time trial type race if something big and fast. a mass start race going fast …I woudnt trust all the knuckleheads near me to stay on their board and not kill me.

I think super informal with even just orange cones marking turns in a parking lot could be awesome. lots of room to bail and slide. falling is nothing but hitting anything other than the ground is something else. forget insurance maybe as it will be so much a limiting. I think a renegade race where there’s no one to sue…or put the poorest person as the person to sue and they can get whatever they can. the regular world doesn’t come with insurance anyway

haha. ok, a tight course would be more fun and better. And cones in a parking lot would be a lot safer than a cross town alley kat race, lol. I think I will look at doing that, seems like it could be pretty cool and could be a lot of fun. And having a times-trials would be a good idea, plus if the course was tight enough, it might be hard break 24 or so anyway. Thanks for the suggestions and Ideas.

Check out the SCCA Rules for Auto X events, esk8 races are very similar to Auto X. It would be best to split in 2 groups or more that way when one group is racing the other group can work the course. Also a small fee for each racer and maybe spectators to cover the cost of the event.

Just set up cones to start. You need to gauge the interest in your area before renting any track out.

Going to the Evolve World Cup this year was interesting but even with 8000-12000 watts, I still was not able to beat the top evolve rider because it was such a tight course. It came down to hitting the corners at the correct angles, which I have little experience with so far. On tight turning courses, I wouldn’t be afraid of grouping everyone together. On longer courses, I would separate into classes. Maybe by watts instead of number of motors.

Just like a bike or a car you need a racing line. basically take the line that cuts through the corner, you want to spend less time in the action of a turn and more time accelerating.

Heres some info: " The line starts at the outside of the road, clips a point on the inside, and finishes back outside—while maintaining a constant radius throughout. The clipping point is called the apex . 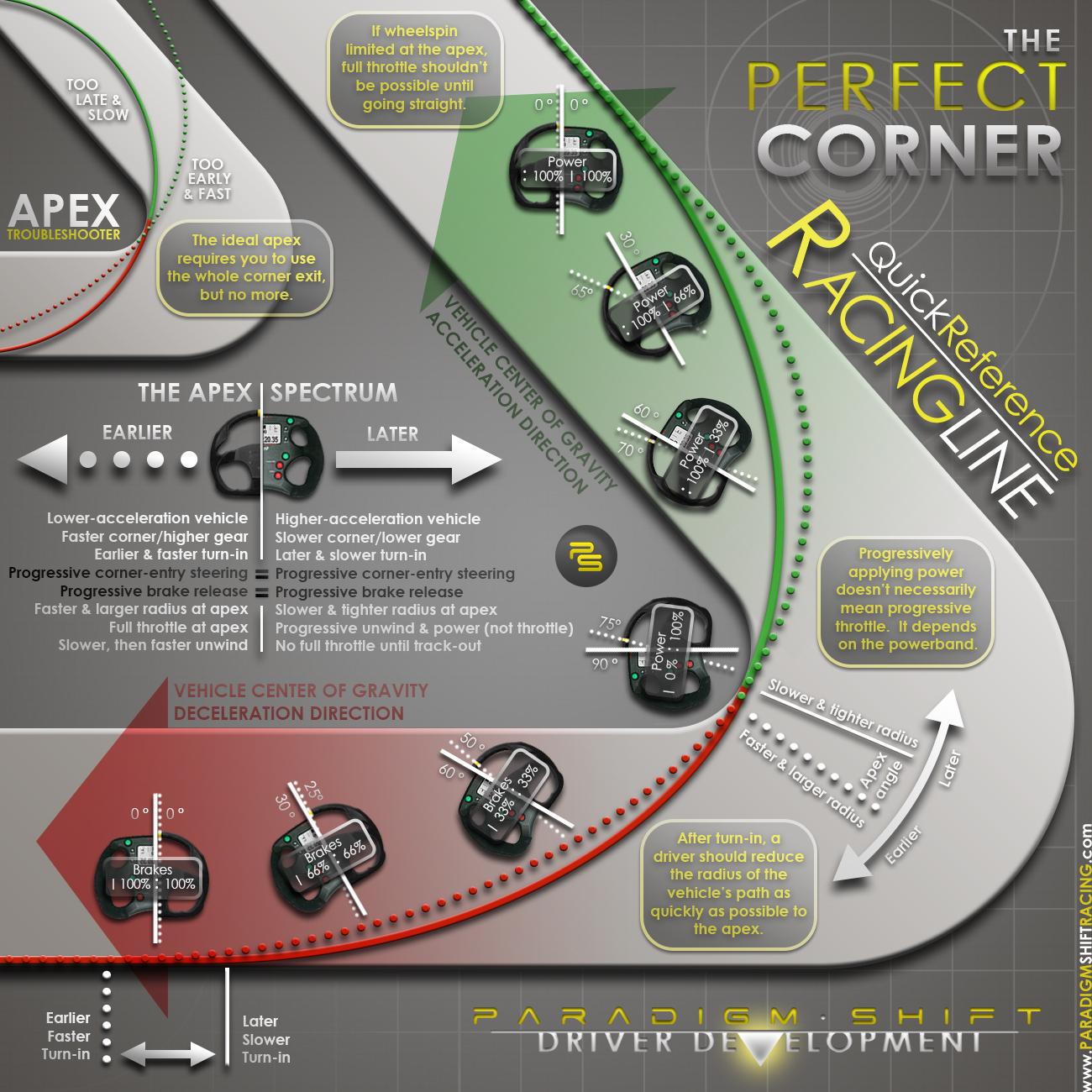 Evolve double king pin trucks would only have an advantage at slow speed tight turns."

Yea. I’m sure it would make a huge difference, it would be interesting to look at how the best line is different in on esk8 vs. in different types of cars. And how the setups are different. For example, cars with more down force like F1 cars, turn later and harder to the apex harder, because they have more down force at higher speed, and they try to maintain a greater speed, with no slip to maintain their down force. Where as many street cars perform much better with a gradual entrance in to the apex. The apex could also be varied for different types of cars and driving styles, in some cases it make more sense for cars with greater horsepower to apex later in the turn so they can open up all the way when they exit, where as cars with less horse power try to maintain a greater speed throughout the turn, because they can not accelerate as quickly when exiting, so they naturally do not need to be as straight to the exit.

It would also be interesting to look at the traction differences. I think u_k or the coefficient of friction of traditional non pneumatic long board wheels increases as the force applied on the wheel increases, that is why down hillers are switching to more narrow trucks, and are running a higher cg(center of gravity), to get more force on the outside wheels. This is different than in a car on pavement where the u_k decreases as there is more force applied to the wheels, so the cg needs to be low, for more even weight distribution in the turns. I think sprint cars (which run in the dirt) also have higher cg, because they get better traction, having more force on the outer wheel. I image it would be advantageous to have narrower trucks, and a higher cg on a skate board.

Definitely agree about the double kingpin trucks. The turn would have to be tighter than any turn a go kart track would ever have. If anything, they could make it more unstable at high speeds, because they could allow for too much turn.

but I don’t like the idea of excluding diy

Nothing more exciting than a close finish especially between favourite old and new, fast and really faster…lol