Loop key vs on off button

You can basically put a loop key anywhere on the leads connected to the batteries (could be on the +,- or in between the batteries) all you’re doing with the loop key is making a part of the circuit you can take out to open up the circuit so it’s basically just a big removable “switch” of sorts. I imagine the same holds true with antispark switches since same concept holds, if it’s not a closed loop (circuit) then no current flows. Regarding XT-90 vs 60, pretty sure the 60 is 60A and 90 is 90A either one will probably work but safer bet to just go with the 90s but in most cases you won’t really be drawing that much amperage.

With the 12S you’re going to be at a relatively high voltage so the amperage to drive the motor at it’s peak wattage (or whatever it’s pulling due to the throttle input) so you won’t have super high amperage. In a basic load situation (which this isn’t but go with me a bit on this) if you have 2000W and the battery is at 50.4V then it would be 2000/50.4 = 40A of current to deliver that power.

That said I’m pretty sure I rarely ever actually have more than 400W draw for any substantial amount of time while accelerating though I haven’t measured with instruments that can give instantaneous values on the go. I need to get a bluetooth module for the VESC to get those details, basic volt/ammeter tells me it’s about 400W-600W though while accelerating and about 4A*40V or 160W when up to speed and just cruising.

This is my personal opinion. Loop key is best for a few reasons. If there is any problem with the electronics you can pull it out and you are more or less safe. Unless you have a short inside your battery pack. With a soft switch/FET switch/antispark switch your circuit is never really off as such. Like never physically disconnected. You have to rely on potentially faulty electronics to protect you from potentially faulty electronics. Ans when said that way it seems like a pretty stupid idea.

However. Antispark/FET switches look sexy and have blue LEDs so they are obviously the more popular choice.

If I put a loop key where the blue is, wouldn’t electricity still be flowing through where the red is? Also, dexter from diy told me that on/ off is safer, and wouldn’t ware out each time I use it…

Click on the pic. Circle in middle. Between possitive and negativ of 2 battery packs…

LOL whoops… I didn’t click on it. yeah that’s all good. you can loop key there, the current can’t flow through the red because you have broken the circuit.

on/ off is safer

I couldn’t agree more with @lowGuido

the only time I have heard of an XT-90s fail is when it wasn’t pushed in fully and the resistor burnt up.

for what its worth who you gonna believe? Me an electronic engineer who have been making e sk8 for years and is giving you advice out of his own time with nothing to gain, Or someone who is trying to sell you a product? just sayin.

I went with both. I put a loop key on the + lead and a manual switch on the - lead. I typically just use the switch, but I have the loop key there for emergencies when I may want to airgap my batteries and motor. I think I added the xt-90 loop key right… where would I add a voltage meter that could tell me my battery percentage. I know the negative and positive termenals, but of what???

You can hook up the voltmeter to the + and - where it connects to the VESC, I just tapped the lines for voltage reading off of there. If it is the type with a built in shunt and ammeter then it needs to just be inline with those battery lines before they go to the VESC. If it’s just voltage though then should just be black on - and red on +. You’re basically just reading the voltage of the battery bank by putting them where the battery lines go into the VESC.

Also the loop key will work fine where you have it, that’s the same way I have it setup right now… trying to work on a slightly better box so I can swap out the batteries more easily myself (and for safety since the most recent fire post reminded me that’s still an issue).

How’d yours catch fire? Also, where do you buy your voltage meter? What would you look up to find them?

Oh sorry wasn’t clear, mine didn’t catch fire but just saw the post from another thread here where someone posted the video of their board ablaze. Just something I’ve been paranoid about and figure it’d be nice to be able to bring an extra set of batteries with me for long days cruising around. I got the volt/ammeter on Amazon I just searched for ammeters I’m pretty sure but they make them for measuring boat battery voltage. The ammeter is probably not worth it just tells you instantaneous amperage but either need a shunt for the current to go through for it to measure the voltage drop and work out the current or you need a loop that goes around the wire, either way lots of trouble for little pay off, the voltage is good to know for a general idea of “fuel gauge”.

Make sure if you get one similar to this it can deal with the voltage you’re going to supply also good to be sure they don’t need a separate power source (built in voltage regulator for it’s ICs).

Is there an easier way? I just need to plug in a meter to see my percentage or voltage…

mmm not sure what you mean really only need two wires with the ones that just do voltage, one I linked has the ammeter part too so that complicates things. there are straight up voltage ones should be a few bucks cheaper

Only easier thing I can think you can do is temporarily using any old voltmeter to check the - and + on the battery leads, but for a permanent solution two wires is as easy as it can get.

I actually have one closer to this now https://www.amazon.com/dp/B01DDQM6Z4?psc=1

The loop that measures amperage pooped out so I just get the voltage reading from it now anyhow, I’m sure you can find the same thing without the amp reading in the first place should be like $10 probably on amazon (probably cheaper on ebay or the like if you have more patience than $)

Picture of mine in the board (I do like it

but probably not for everyone ) 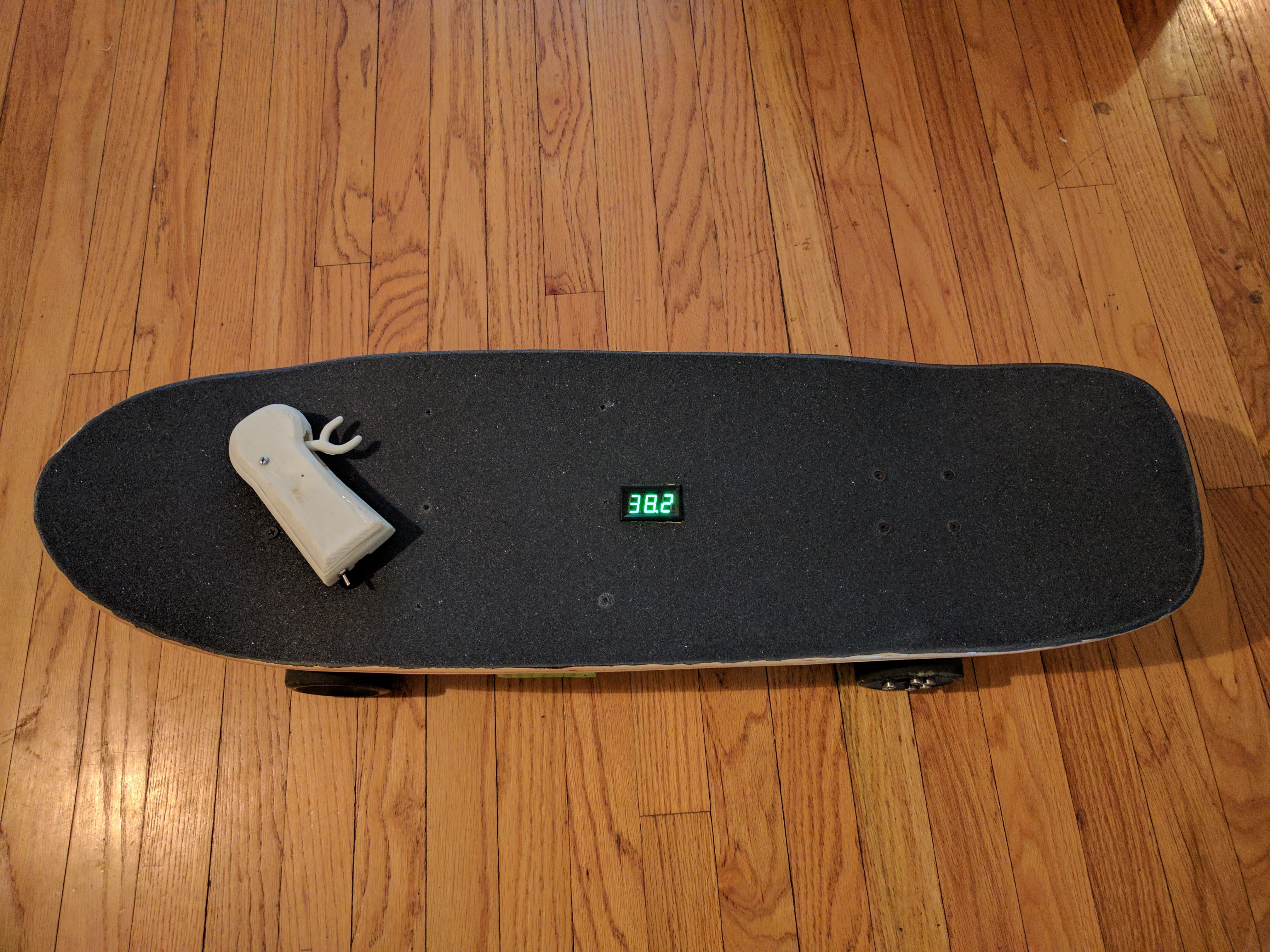 Do you have to program it to how many cells you have? Also, don’t they have a max voltage they can withstand?

Yeah last one I linked has it in the title 5-120V above 120V you’d fry it I use it for 10S it works fine (it’s not perfect but gives you the gist of how much voltage is left). You don’t have to program anything there is one button on it you can hold down to get it to recalibrate but otherwise so long as there is power going through the lines it will show you the voltage.

Actually another probably better option is to check out the metr app and maybe throw a bluetooth module on the VESC for getting the live data streamed to your phone or however that works but someone would need to fill in the details, with that you wouldn’t have anything extra to put on the board really just a little circuit board on the VESC I believe (haven’t used it).