in a previous thread about pressing decks, i went on about the deck and how awesome it turned out. But i never really gave the press the attention it deserved. Here’s the previous thread: http://www.electric-skateboard.builders/t/so-i-pressed-a-deck-this-weekend/

That press was affectionately known as Monster Clamp, and it died pressing that awesome deck. During the process of pressing what will become LHB’s Scarlet model, bolts bent and wood chips flew and a popping sound not entirely unlike small caliber gunfire was heard in my garage. When that happened, i did what any grown ass american man would do. I said “Well, shit.” and popped open an ice cold beer.

So this past weekend i went to Lowes and got myself stuff to build Monster Clamp II: Revenge of Monster Clamp. I already had a gallon of titebond II from when i bought the wrong glue for laminating deck veneer. titebond III has a longer working time, and believe me, you need it.

Here is how it all went down.

It all started at Lowes on Saturday morning. After wandering around the store for a while wishing I had a million dollars so I could build my own skate castle where my house currently is, I decided to get back on task and loaded up my lumber cart with everything I would need. 16 8ft 2x8s, carriage bolts, washers, nuts, screws, and a butter finger at the checkout line. 7am is not too early for a butter finger. Tell your mom i said so. When I got home, Simon, my Senior Trials & Engineering Inspector, was ready to help me clean out the garage a little more and unload the truck. once all the cutting was done, I had a few neat stacks of lumber ready to glue-n-screw. Three layers in and I was ready for beer, but it wasn’t beer-o-clock yet, so i had to keep working. Roll on glue, lay a piece down, line it up, screw it down, repeat. After all that glueing and screwing it was time to clean up a little. I swept everything up and started figuring out how i was going to stand this behemoth up on its legs. There’s a funny story about this heavy-as-a-spoonful-of-neutron-star press and it involves a hand-truck, me sitting on the hand truck after the press was slightly lifeted up, and me flying over the press as it returns to the floor, catapulting me onto my face. I’ll tell it to anyone who wants to grab a beer with me sometime. I did get it to stand up, however. Before I could continue, the Senior Trials & Engineering Inspector showed up to check on things. He gave me the go-ahead to continue. I was afraid he was going to shut the whole thing down due to lack of permits or formalized and approved blueprints, but i managed to bribe him with a few quick tosses into the air and some noms. The next morning, the drilling began. Holy crap it took all damned day. I decided not to use all 16 carriage bolts after discovering that I had accidentally put some screws where i shouldn’t have during the laminating process. I could have filled in those holes and drilled new ones, but i think the way it is is already slight overkill. After this i sanded the shit out of it with a belt sander loaded with 50 grit paper until very late in the evening. The top is perfectly smooth so it can be used as as shelf or additional bench once I get a better place to store my veneer. The inside bottom surface was also sanded perfectly smooth to ensure that the mold doesn’t warp or break while pressing. This bit is kind of important because the mold doesn’t have as much strength across certain angles, so it could potentially split apart if the pressure isn’t even enough across all of its laminated blocks. More sweeping, and more hernias to get this thing into its new home next to the bench. Final touches include a 1" sheet of cabinet grade plywood to lay the mold on flatly, a pair of 4x4s with steel plates mounted under the top for the jacks to press against, and some blocks across the top of the mold to more evenly distribute the downward pressure from the jacks. Lastly i applied my die cut logo decal to the front. I may at some point put this thing on giant castors but for now i think we’re good.

that is soo cool… i cant wait to see what this monster gives birth to… sexy little stick monsters!

Freakin beast of a press. Was thinking about building one this summer…very motivational to see it done here, thanks for posting all the info/background.

Very nice! Wish i had a spare room to make my own one! Somehow i don’t think my fiancee will agree to putting one in the living room >>

tell her it is a tv cabinet

@Iceni Yeah keep a TV in it and say its an entertainment center. brilliant! you could also make it the footer of your bed and keep vases or framed photos in the giant hole while you aren’t actually pressing anything. Give it a nice colored stain. Or tell her its a cat playground. Its all about stealth!

We do have a cat, so it could work!

After three years of regular use i started having lamination issues and found it was due to the wooden frame finally cracking and giving way under pressure. This frame was no longer going to be able to do the job, so a few weeks ago i commissioned a local metalworker to build me one out of steel. 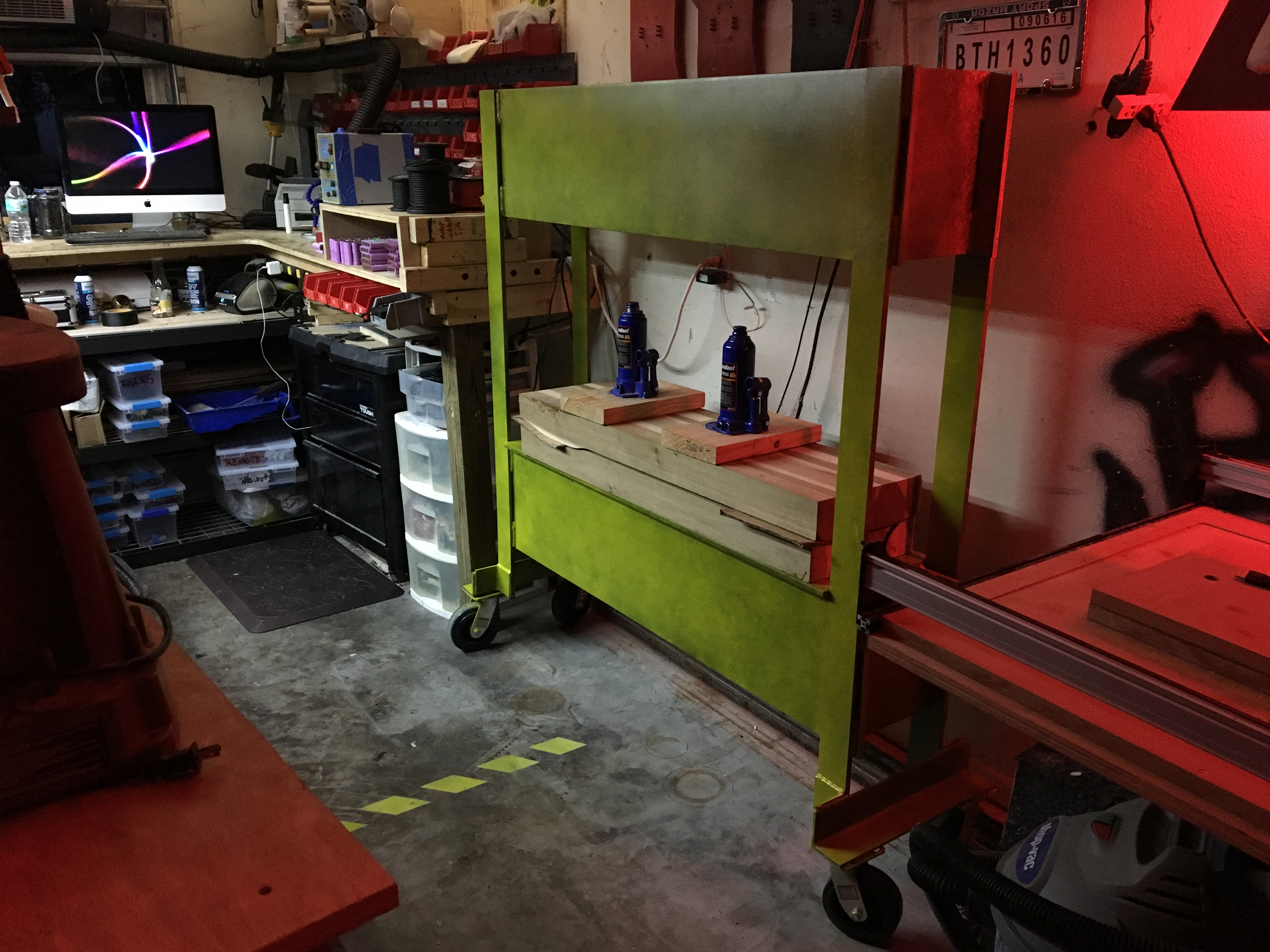 so now we’re on MONSTER CLAMP III which will most likely not only survive a house fire but also the apocalypse.

Urethane casters allow this 1000+ pound 7/16” welded steel plate monstrosity roll around with surprising ease but i won’t be moving it around too much.

it’s got room and amenities for upgrades, i could use much larger jacks or even fit it with pneumatically or electrically controlled hydraulics or something cool like that, but for now i’m going to make some riser pads for my existing jacks.