wanted to run my setting by, see if i’m doing something wrong.

this is coming from what used to be a 6374 dual drive, 12s4p setup. had to take one of the motors off for inspection / replacement so will be running it mono until it’s replaced.

here’s what i’m getting at max power draw: i have batt max set at 70a but going up hill under hard acceleration it’s only drawing 28amps from the battery.

is there some setting i’m missing?

Would voltage sag be a culprit here?

Would voltage sag be a culprit here?

I was seeing about 3v sag, but amp delivery should be unchanged. my understanding is voltage and amp draw should be inversely proportional?

It’s probably your drivetrain. That might be the maximum amount of torque your system can actually transmit with one belt/pulley. What belt width and motor pulley size are you using?

my understanding is voltage and amp draw should be inversely proportional?

But that’s not your problem here.

Could be a couple of things. Since I don’t know what your settings were before, it’s not clear if this is the problem or not.

But the VESC limits work by using which ever limit is lower: motor or battery. Devin had formulas that he claims worked, @Ackmaniac disagrees with these formulas (i’m somewheres in the middle), but has not provided any formulas either so that you can tell which one is hit first. Put the motor amps up to 100 and see if you get more battery amps. I would suspect this is your problem.

Is this on the same battery pack? Could it be batteries can’t deliver so many amps?

At low speeds and hard acceleration I would expect the vesc to hit motor max limit while at higher speeds the bat max should be the limit factor.

I run foc on focboxes and I never hit my battery max but it’s not far off, at most 2-3 amps lower…

If you run ackmaniac firmware could it be you have W limit on?

What belt width and motor pulley size are you using?

Is this on the same battery pack?

yea, LG HG2 12s4p. checked connections and everything looks good and all P packs are balanced

Put the motor amps up to 100 and see if you get more battery amps. I would suspect this is your problem.

sure, ill give it a go later

Heat is probably your issue here…not your settings. I bet your hitting vesc thermal throttling(FETs) going uphill with one motor

Just do us all a favour and make a video with the app while you go uphill. Then I can explain you what is happening in detail. Guess battery cutoff or temperature is the limiting factor here. But with a video I think I can tell you exactly.

you won’t hit your battery max amps unless you’re at 100% duty cycle I’m pretty sure. maybe you need to up your motor amps so you have the amps to even get to the higher speeds, and therefore higher duty cycle, to fully get to your battery amp limit. what’s your motor amp setting? I like 120 motor amps.
with the pic you posted you’re only at 60% duty cycle.

Based on the calculations I just did, you are only capable of transmitting about 1200 to 1350 W (depending on belt length) for a single drive with 15T motor pulley and 15mm HTD belt

This is right inline with the 1244W you recorded

Would you mind sharing the formula you used considering belt length as a factor?

its at 80a now, will give this a go later

max temp is below 60c at top of the hill climb. where does it start throttling?

Just do us all a favour and make a video with the app while you go uphill.

pardon the shitty quality, the glass covering the camera is shattered right now 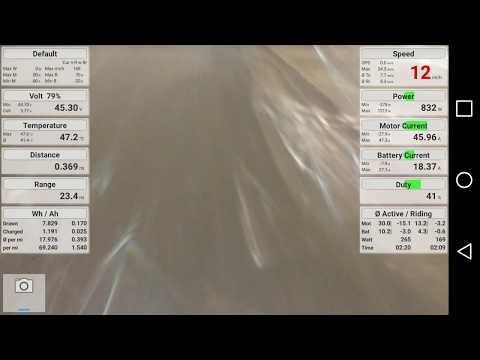 That is a really strange case. It’s not limited by the the battery voltage and also not by the temperature. Please post screenshots of your settings. Maybe something is wrong there.

Do you have a BMS between the Battery and the FOCBOX?

yes, 80a bestech bms, using it for discharge.

i don’t think it’s the bms because in dual drive it gets up to 80a batt discharge.

Could be that one of your series packs is too far off from the other cells so that the BMS reduces the power. If you have the chance try it without the BMS and let us know if it makes a difference.

I wouldn’t include a BMS in the discharge cycle because you never know what they do in detail. Would only use it for charging with charger. On 3 of my boards i don’t even use a balancer at all and check each series pack from time to time. Max difference so far was 0.01V (Li-Ion). With a Li-Po i think it is necessary to balance but with Li-ion and a adjustable charger i would set it to 4.15V for each cell and then you should have enough wiggle room if the cells start to drift.