About 2 weeks ago though, I installed a 10s charge only bms with the help of @Namasaki, and since then when I try to ride the motor stutters. At first it would only stutter when I was at cruising speeds, about 18-20 mph, but then it began to stutter around 10 mph, then 5, and now it won’t spin at all, only stutters. I hooked it up to bldc tool, and completely reprogrammed it, but it still stutters, even during the motor detentions, except for sometimes when it would spin, but way faster than it used to when I would change some settings on the VESC. The even stranger thing now is that I have the board wheels up on the table, and when I use the remote and accelerate, it only stutters with low acceleration. Pictures below 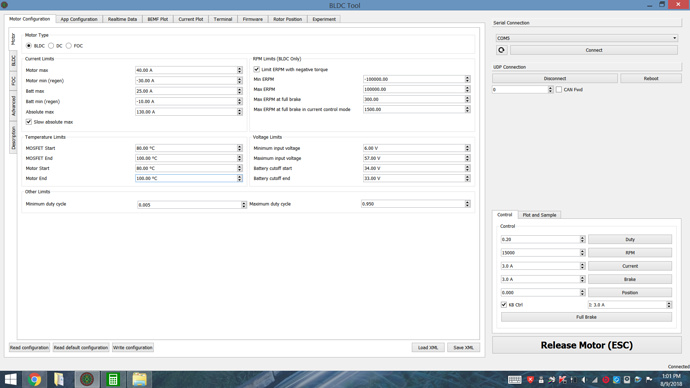 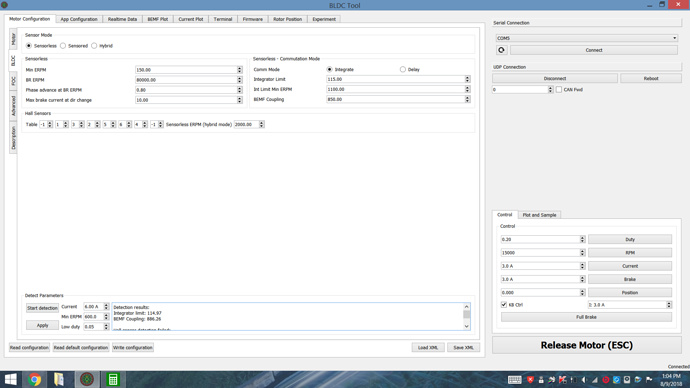 Sounds like you might have a connection issue on your motor phase wires. At first it was intermittent and now its fully disconnected. Possibly caused by vibration. Inspect your motor connections. See if the bullet connectors will pull loose from the wires also look for cold solder joints.

Thanks guys! I looked under the heatshrink and all of my connectors were good, however the TB Vesc xt90 has shaken loose. @Namasaki, that’s twice you’ve saved my ass, hopefully the last time! Thanks so much

Get the smallest size cable ties and hook 2 of them end-to-end and put them around the connector, between the wires on each side, so it CANNOT vibrate loose. Been there before LoLzz

I wouldn’t have thought that an xt90 would shake loose. Cable tie is a good idea @b264

Yeah, that way it’s A) removable and B) if it cuts into the wire insulation, it won’t short onto anything around it because it’s on the inside surface of the wire and the tie is nylon

Sorry to summon you guys, but I resoldeded that connection, and everything worked fine for two weeks, and now the motor makes a clicking sound once and then doesn’t respond at all when I move the throttle. When I plug it into bldc tool, there are not faults, but the motor spins faster than usual when doing motor detection and it keeps on saying bad detection result received. I really need some help

Look for another loose connection as before. It could be the same connection or a different one. Also check battery voltage.

I checked all connections, and the voltage is 40v (10s). Do you think something is broken inside the motor?

Do you think something is broken inside the motor?

Possible. One of the phase wires could be broken. Although, I don’t think it would spin in motor detection if a phase wire is disconnected. but it could be an intermittent break.

I’m using a turnigy motor, and it has this really stiff copper wire that breaks a lot. I have checked if up and down, but maybe it snapped on the inside. Can I take apart the motor and solder on silicon wire?

My recommendation is to upgrade to a quality esk8 motor. SK3’s are not the best and you’re better off with something that won’t keep giving you problems.

My recommendation is to upgrade to a quality esk8 motor.

I’m working on my second build, a boosted clone, but I just want something to ride right now. I have a spare 5065 260kv that I was going to limit the ermp on, but it doesn’t fit my 63mm TB mount. Is it possible though to replace those wires?

the phase wires are part of the windings and they are insulated with a clear coating. It would be difficult to solder them with the insulation and without the insulation the wires can short out. It may be possible to fix it but not easy. You also should consider the safety factor. You don’t want your motor locking up or braking suddenly while your flying down the road. Having dependable components is very important.

Ok thanks so much. I think I will just order one of the 6355s early and throw that on rhere