Though it is not very traditional, as I already had a 10S 2P arrangement of cells but I needed 6S 4p. So I also had to add 4 extra cells on at the side, to make it 6S, instead of 5S, since it was possible to split the 10S pack in to halves and then just add one one more serial connection for each side.

Anyways, here is the picture (s), of the somewhat finished pack. Though, I ran out of solder, so I still need to make 2 more parallel connections / rails, for the two last parallel packs (2nd picture, at the bottom) 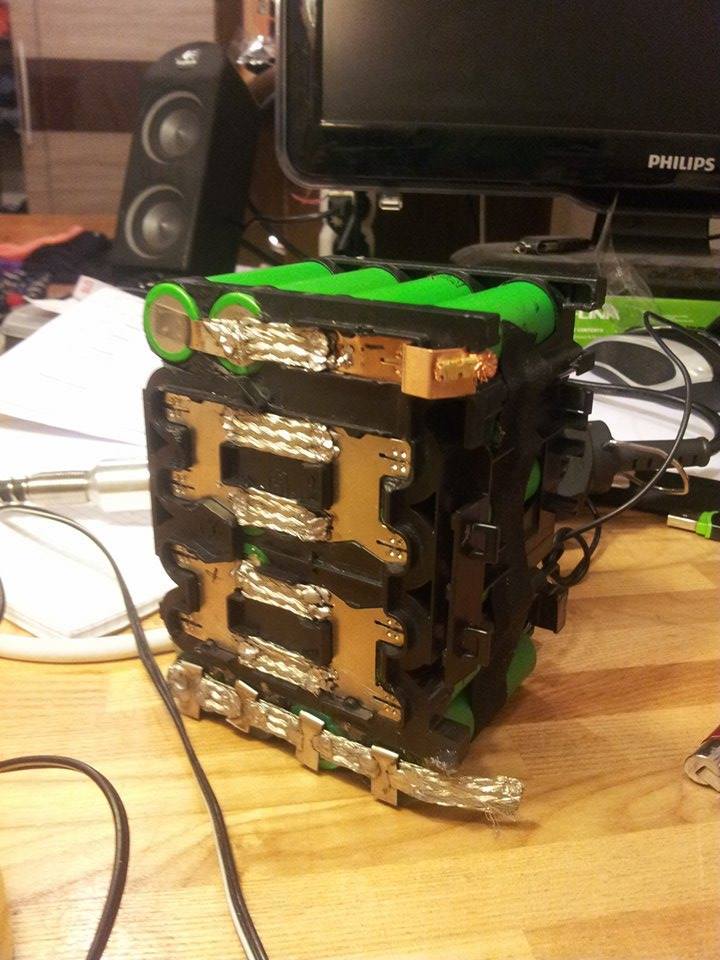 As you can see I used tinned braid for making the extra parallel connections… I connected each rail of cells together, though I thought for a long time to decide If I need to connect all array of 8 cells with just one parallel rail or that Need a rail for each 4 cell pack. I decided to go with 4 cell parallel rail as I understood that I wont be able to make a somewhat decent balance wires, If I did not have a direct connection to 4 cells in parallel.

Anyways - for those who have read such far - How do you connect tinned braid to the cells tabs / nickel strips? I had a hard time to decide how much solder to use and whenever I should pre-tin the strips and the braid… At the beggining I did not use tinning, I just applied solder between the braid and the strip. Later on I I started to pre tin both surfaces before soldering them together.

It was hard to feel when the braid had finally attached to the strips and the heat was quite excessive too, at least for the braid, as it gets quite hot very fast. I tried to cool it down as often as I could, since I did not like that the heat stays there for a long time.

Besides that - I still got finish the pack by soldering the two last paralell rails, then attach discharge / power leads and then finally add the balance wires and wrap the pack up.

Had one more extra question -

Which wire should be the first one for connecting the balance cable to the charger? Im not sure whenener it is on the right side or on the left side. Perhaps, someone can send me a diagram or a shematic for that.