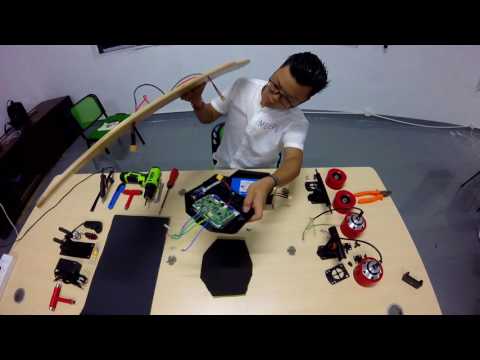 I liked the “in this video you lernen”

Please take it as a joke only. No offense intended.

Just a few suggestions on the video, well really the audio… would be good to grab a mic of some sort (Blue Yeti work pretty well for podcast or voice over type stuff and aren’t terribly expensive) aside from a mic just shooting in a room with less echo would probably help a lot, had a real hard time hearing over background noise and echo. Think I could understand you pretty well if I could hear you better. Overall layout and camera setup seemed good though so

on that good luck with your setup videos!

I use gopro black, how can I use mic? Record seperately ? Thank you for your help.

Yeah I like audacity for recording on a budget and doing some noise removal. Adobe audition I think it’s called is pretty awesome but has a bigger learning curve and monthly fee or large up front license fee. Hardest part then is synching the audio and video helps to just clap at the beginning of recording while on camera and the mic is running then just need to match up the visual and audio clap and everything else will basically line up. For video editing “kdenlive” on Ubuntu is pretty good otherwise can use a generic movie maker program to edit the audio and video together (Adobe also has “premiere” or “after effects” that could work but again more expensive than free and more complicated)

Just searched apparently can get a 1/8 input for the go pro so that might be an option too (analog only though it looks like). The blue yeti is a USB interface mic so basically acts as it’s own sound card and eliminates any analog noise you might get from the computer doing the recording or other equipment.

Motors look good but I spy the cheap eBay esc…

I’ve been hearing better-than-OK things about this esc series. I just ordered 2 of the dual hub versions to try on a Frankenstein build. I also just ordered a Meepo board as it looks to be the perfect budget option to let friends ride and borrow or to just generally get others into the sport without worrying about someone crashing at high speed on one of my DIY boards. I think its an acceptable alternative to any of the other cheapies such as koowheel, liftboard, etc.

That ESC from eBay is a good deal. I bought the dual version for one of my hub motor builds. I would recommend adding the $13 express shipping because it took about a month and a half when I ordered with free shipping. The ESC limits the max RPM so they tend to work better with larger hub motors. I get around 17 - 18 mph with my 6S build using 83mm motors. I’ll try to post about that build soon.

Other Skateboard Parts for sale | eBay

Get the best deals on Other Skateboard Parts when you shop the largest online selection at eBay.com. Free shipping on many items | Browse your favorite brands | affordable prices.

Yeah i also ordered them with the idea that if something went wrong with the meepo i could easily swap it out and not be down for a swap as i ordered the 10s hub version. I wish now I would have gotten the expedited shipping…damn being cheap

Yes, this ESC come from same supplier where my ESC come from. You can open an ACTON blink or a Backfire II They all share this same ESC. How do you think ACTON boards?

Yeah I have also heard that the lou board uses it. After seeing it in action doesnt seem too bad. Might make a small 6s board for my brother with one when I get some spare cash.

Good price and performance from what I’ve seen!