I have disassembled motor that I’m trying to put it back together.

It’s from a Meepo that lost the hubcap during a ride. I found the hubcap back. But I took the motor apart before I realized that the noise I was hearing was due to the missing hubcap. It looks obvious now, but it didn’t then

Anyway, the problem now is that when I screw the hubcap in first and try to fit the motor in, the magnets grab the motor and I can’t push it all the way in.

And when I fit the motor in first, I can’t screw the hubcap back in place. Because there is nothing sticking out enough to apply force.

The way I see, the best way should be to put the hubcap in first then slide the motor in place. But how do you do that when you have magnets pulling the motor to the sides? I saw a guy doing it on youtube, but the video cuts off when he’s about to do it and he explains later that he had to twist and push. Which I tried and tried.

Is there a trick to do this besides twist and push? Anyone ever open these hubs and put them back together?

Is it the same construction as these? 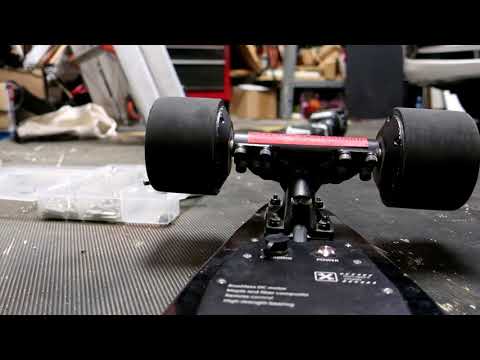 Pretty much. I looks more like this one https://www.youtube.com/watch?v=5sZe1fZkIm8 but the concept is the same. Except for maybe the hubcap, which I couldn’t see in either video (I skimmed yours). The hubcap on mine holds the motor in place so it doesn’t touch the magnets.

I’m going to watch your video now to see if it gives me a clue.

OK. The only difference I see is that the hubcap on this video has screws while on mine the whole hubcap is a screw. Also I just realized that the video I posted has the same hubcap as mine. He shows it at 17s.

On your video he makes it look too easy. Does the axle in the middle of the Stater(?) go all the way inside the bearing or it just touches it? Because mine doesn’t go in.

When I put the hubcap alone on the stater, it axle just edges in. And by the way this guy got one of them in so easily, maybe this is what’s stopping me.

So what do you think? Should it go in all the way or just sit there? I imagine all the way otherwise what’s the point of having the bearing. But again, I don’t know what I’m doing and I don’t want screw it up more than what I may have already done.

I’m going to end up buying two new motors because the urethane is dying, but I want this to work again so I can make a decent backup board.

On your video he makes it look too easy. Does the axle in the middle of the Stater(?) go all the way inside the bearing or it just touches it? Because mine doesn’t go in.

One side was easy, the other side took 5 min to get in.

If you mushroomed the axle at all it definitely won’t fit in the bearing. I’d go ahead and file a little chamfer if that helps get it on.

Well I finally got it all flush front and back. By unscrewing the screws and using a hammer and flat screwdriver to twist the hubcap in a little more. Then back to the back screws. Basically half front, half back, undo quarter back, front, back.

But the problem wheel, while ridable, is a little rougher to turn than the other one. This time it feels more like a bearing problem only (no weird noise), so I going open it up again and make sure that the axle goes inside the bearing and that the cap spins freely by itself. Then see if I still need to use my weird method to assemble it back again.

Crossing my fingers and thanking you Chainmailledkid for you help and encouragement.

Struck out again. But now at least I have an idea of what happened from the beginning.

The wheel was turning but much harder than the other one. So I opened it up again.

This time the damn bearing was stuck in the axle instead of the hubcap as it was before. I tried to pry it off gently but it didn’t budge. There went my idea of filing the axle.

I put the wheel back together and took it on a ride. First 4 blocks everything was fine, but on the 5th I noticed the hubcap making noise and sticking out. So I brought it home put it upside down and put on full throttle. I literally watched the hubcap get looser and finally pop out. But I also noticed that the wheel was pretty hot. Much hotter than the other.

So here is my theory. The bearing started to go bad, because that’s what happens to them when they don’t have loving parents (meaning me). That increased the friction, which in turn made the hubcap unscrew by itself. I only saw the result which was the motor turning roughly. Since the hubcap battery looked fine, I tried to get to the inside bearing. In the process I mushroomed the axle. Now I have two problems to fix. Bad bearing (or at least it will be once I manage to pull it out) and mushroom axle.

I’m shopping for new bearings on Amazon because they deliver fast. The ones that came with the board are 6000 2RZ, but the only ones they have are 6000 2RS. The difference is that the 2RZ have Two Non-Contact Seals while the 2RS have Two Contact Seals.

Do you know the difference between non-contact and contact? I read the specs at Nachi’s website and they seem to perform the same.

I’m buying the 2RS anyway so at least I can find out if my theory is right, and they have some very cheap on Amazon. But eventually I’ll want to buy better bearings and knowing the difference in between contact and non-contact may be important.

An update. After a good struggle to remove the bearing from the axle (had to use special tool) I replaced it with a new one. Then I used a dremmel to shave the axle off so that the bearing could fit. After shaving quite a bit off the axle and having the bearing still going only half way in, I decided to stop. See, I still don’t know if the axle was supposed to go all the way in or just sit at the edge to keep it straight. It’s hard to fix things when you don’t know how they’re supposed to work. So I placed the hubcap back in, and copying someone on a forum, I superglued the hubcap to the wheel. Waited a few hours and decided to test it without actually riding it. It went fine for a few minutes and it felt just a little slower than the good one, specially when braking, but it sounded fine and I would’ve been happy with it that way. The hubcap was staying in… But then all of a sudden the wheel stopped, and after that there was a funky noise coming from the wheel. At this point I gave up. I’ll wait until the replacement wheel comes in and I have started looking for a new setup with replaceable urethane. It still makes sense to have a spare board, but I’m giving up fixing this motor. AFAIK, it could be the internal bearing going bad and I never managed to disassemble enough to even look at it. Maybe now that I’m not afraid of breaking the motor I’ll be able to tear it all apart. Thanks for the encouragement!