My Velcro Board was built with a particular use kite in mind. However, once the build was finished enough to be rideable, I just kept riding it since that itself is a lot of fun and I sort of forgot about its original purpose. Until today. We had a lovely autumn day and it was also my last day off before starting a new job, so I thought it would be the perfect finishing of the season to put the board into test.

I packed up all my gear and set off for my favorite local kiting spot. That’s me with some extra 15 kg of weight. I guess you don’t meet many e-skate riders with a kiting harness on street.

Wearing it is the easiest way of carrying. 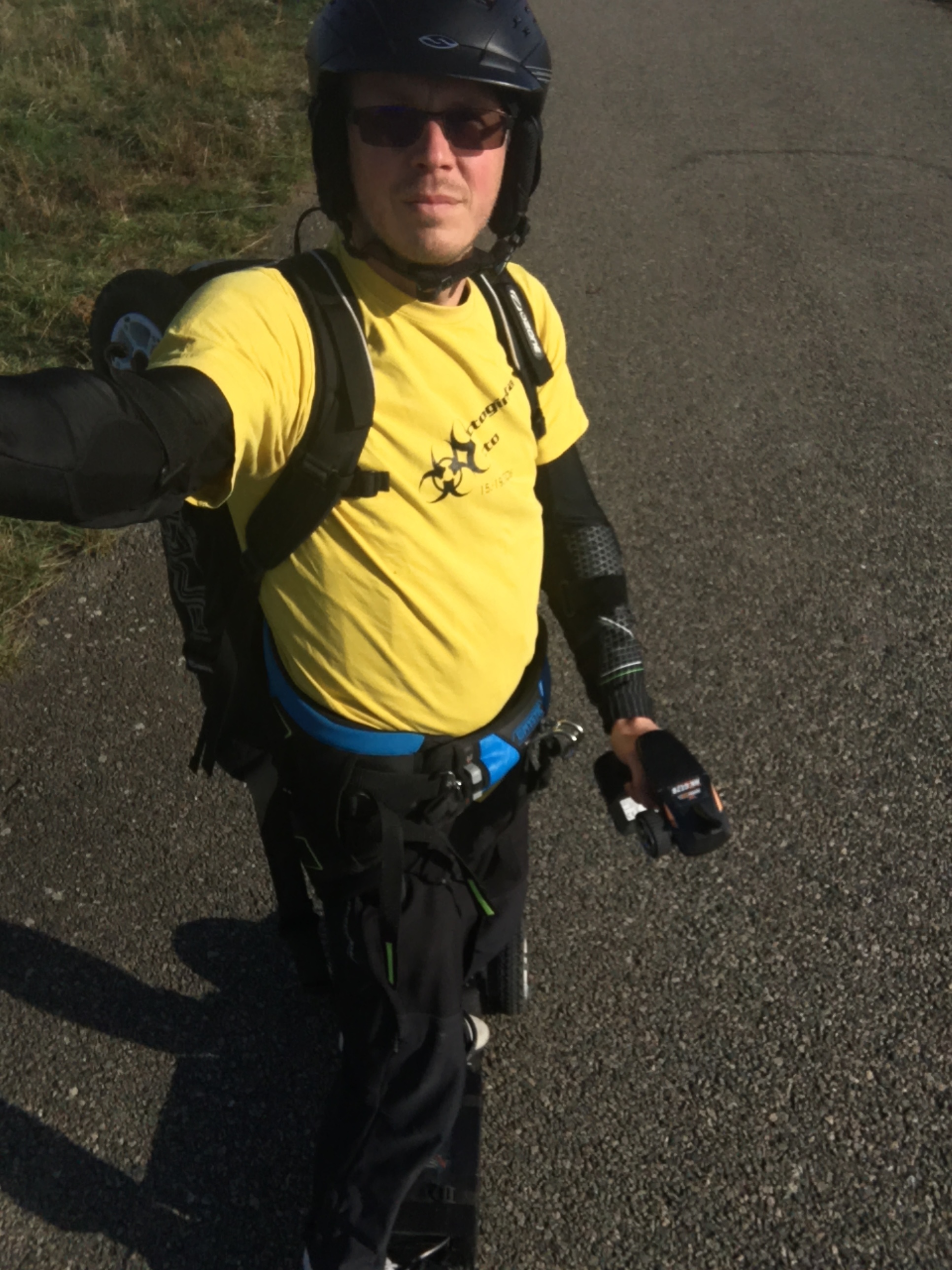 Arrived at the spot. My Dave thinks I won’t have enough juice to return. o-o 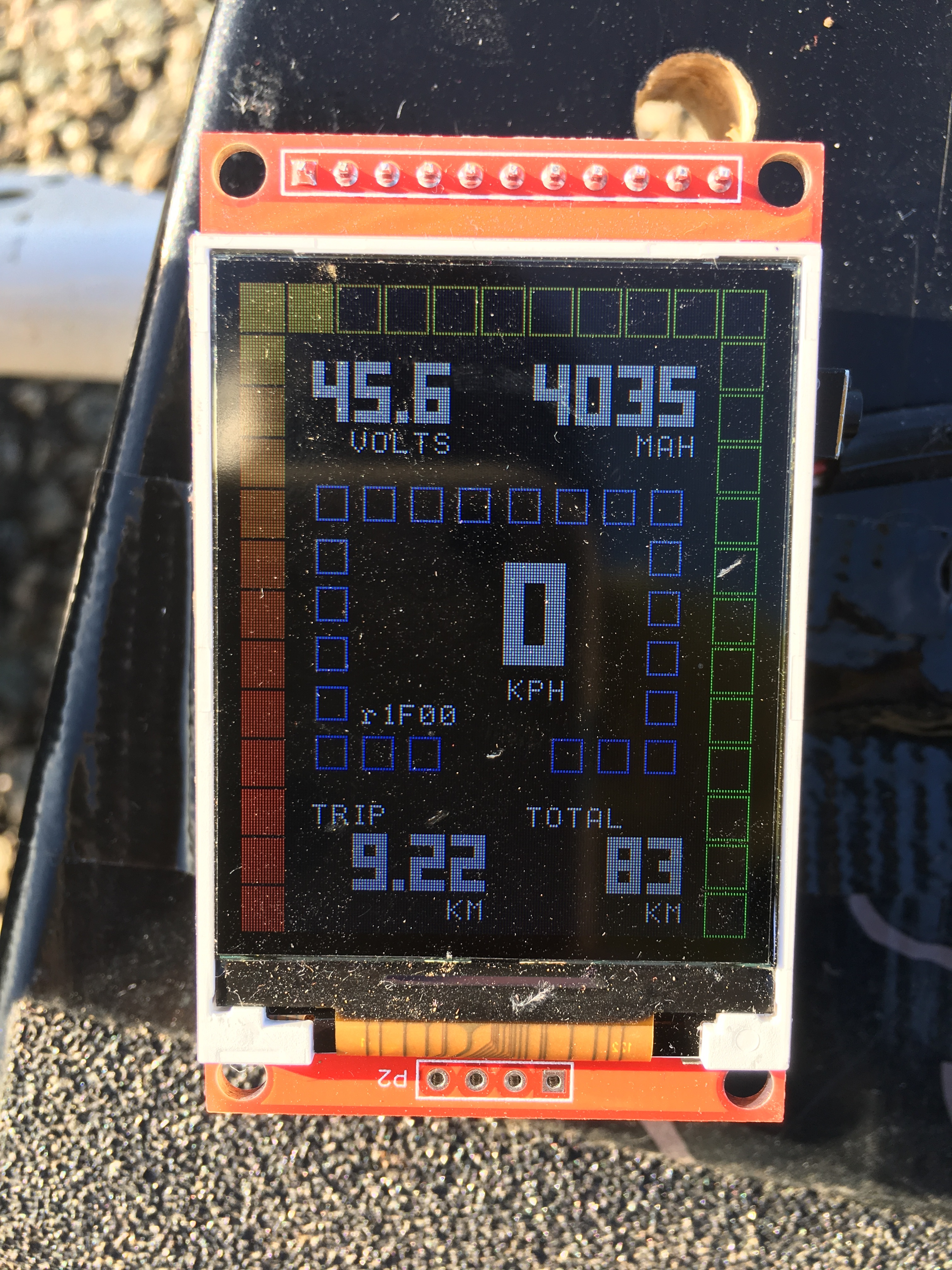 But I’ll worry about that later. Now it’s time to do the board conversion. 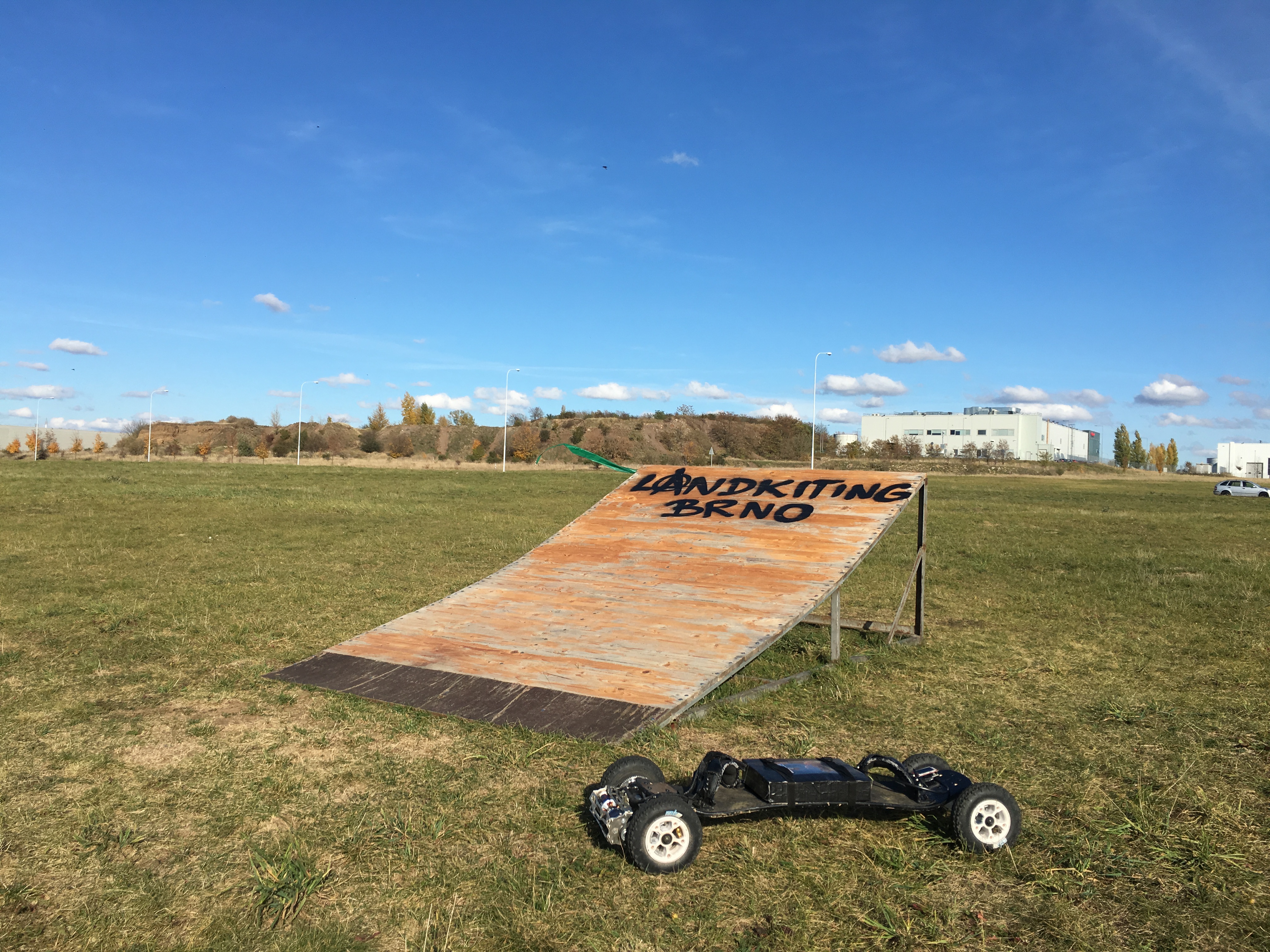 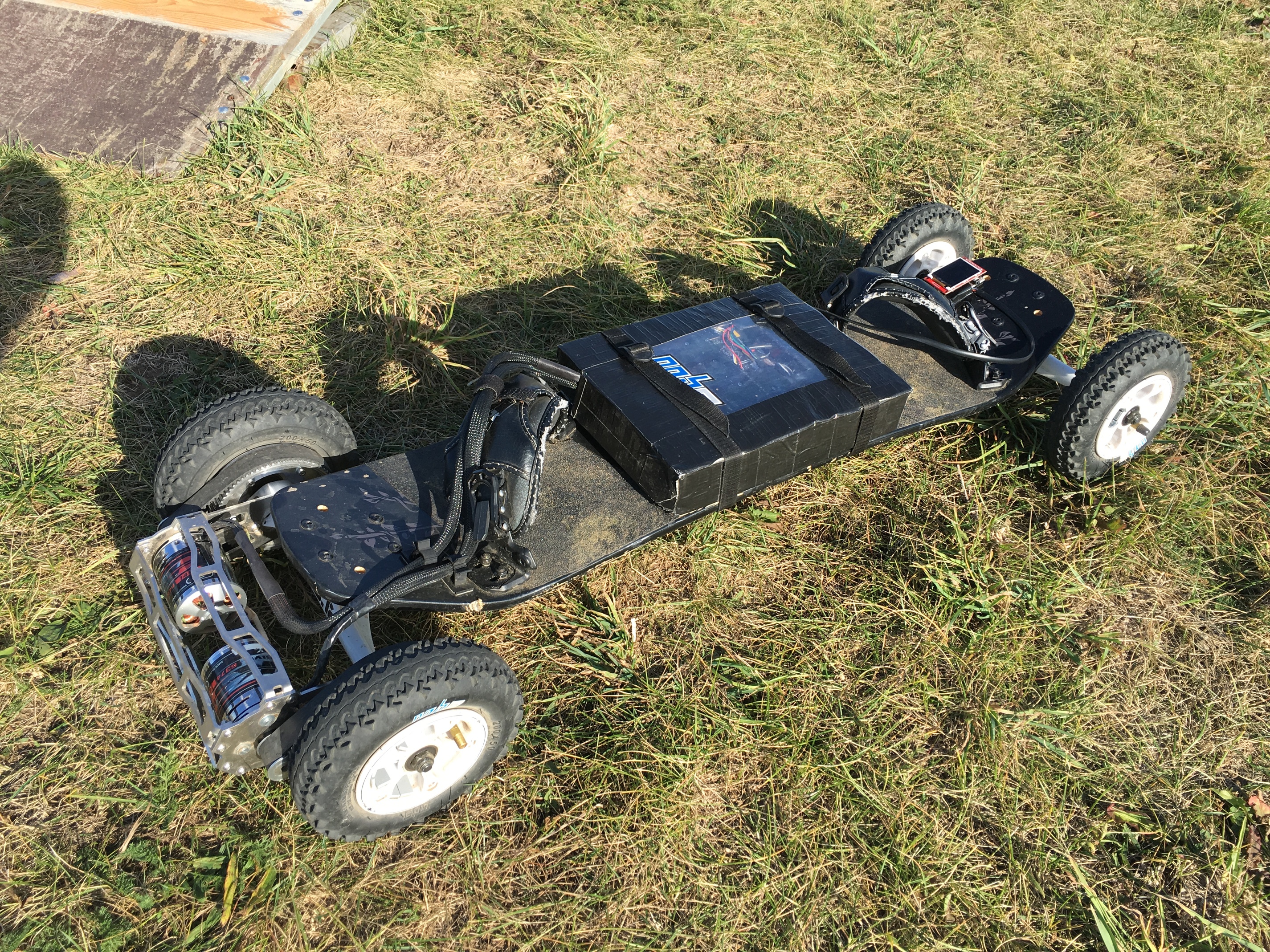 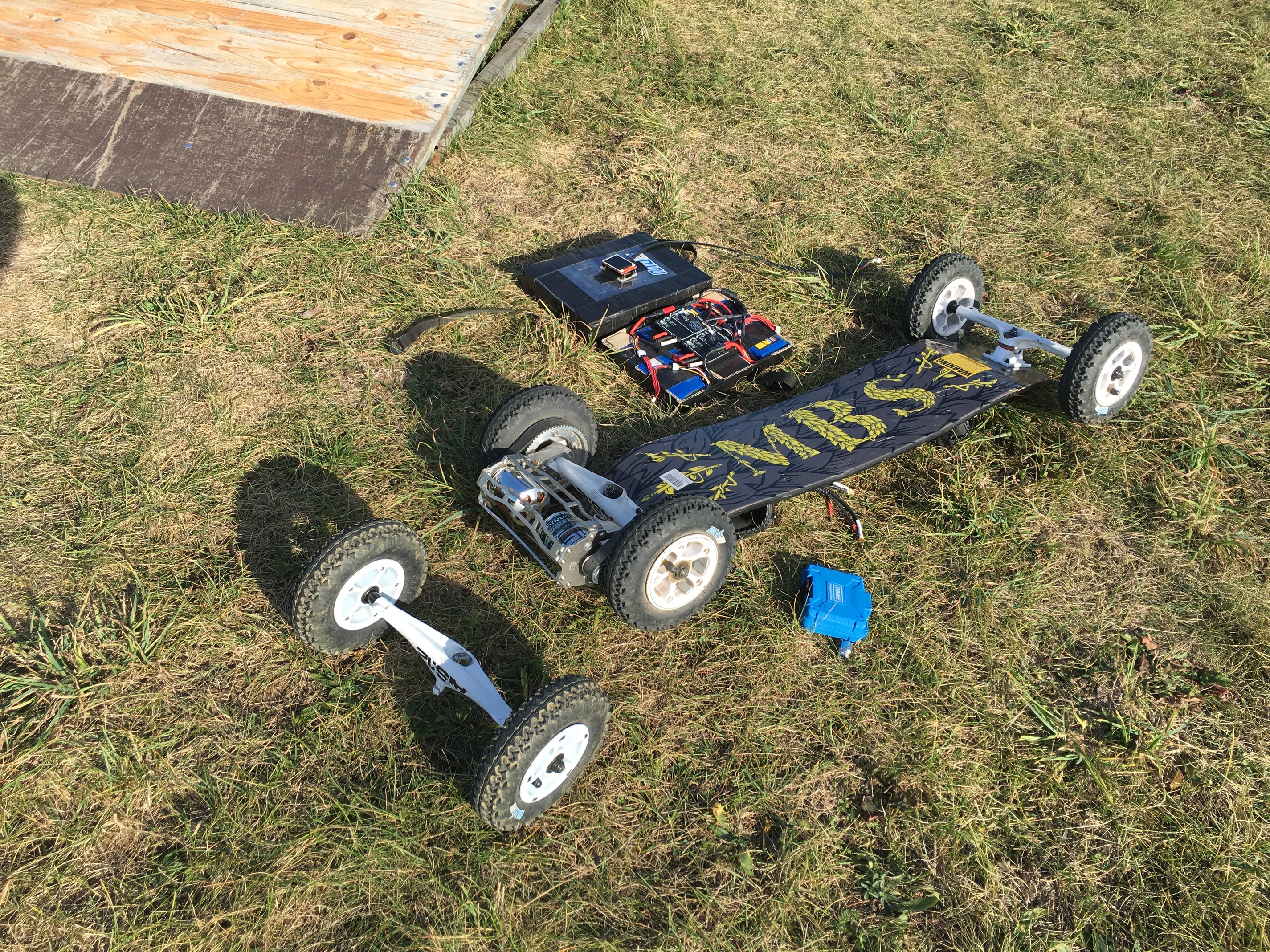 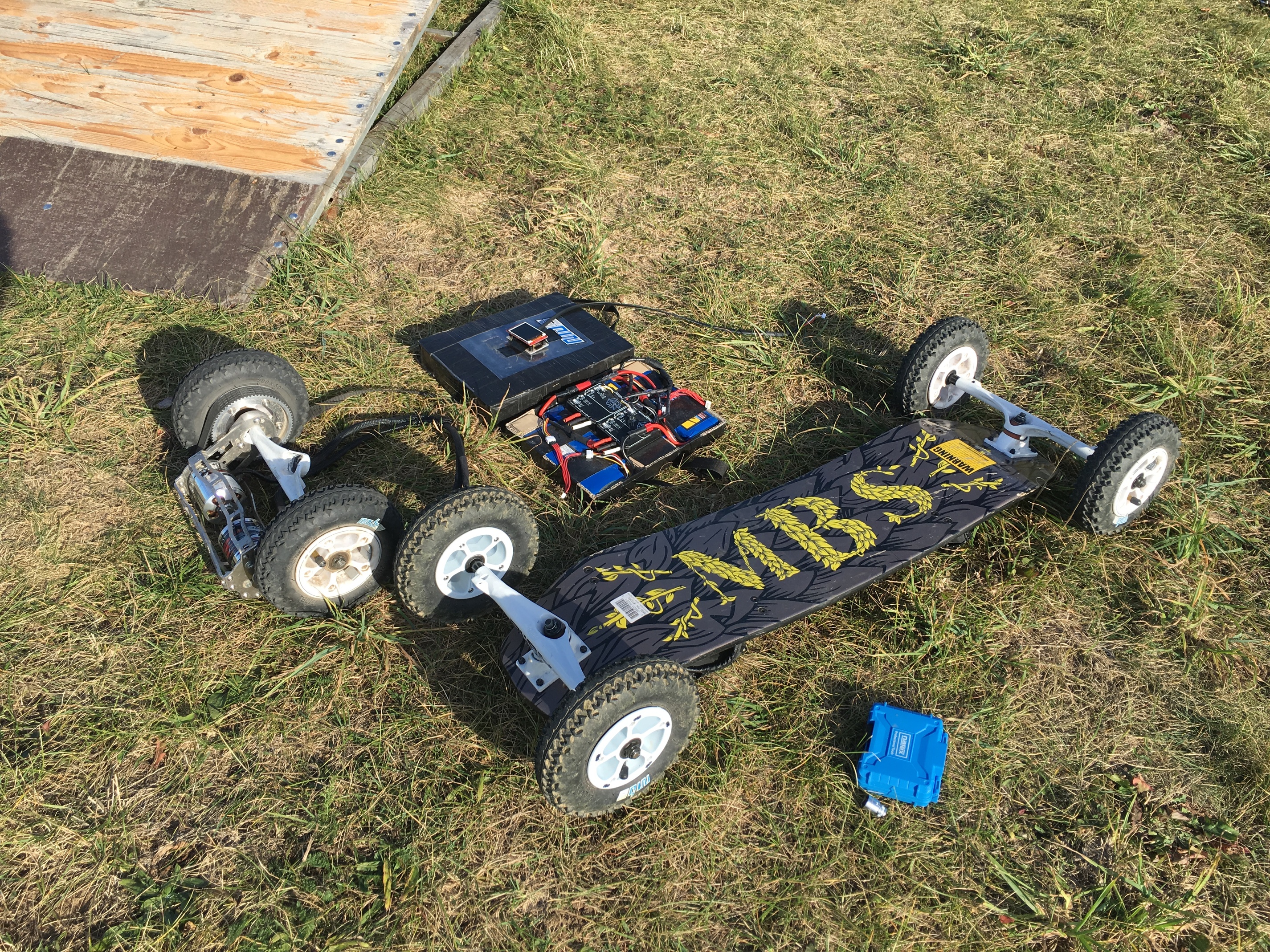 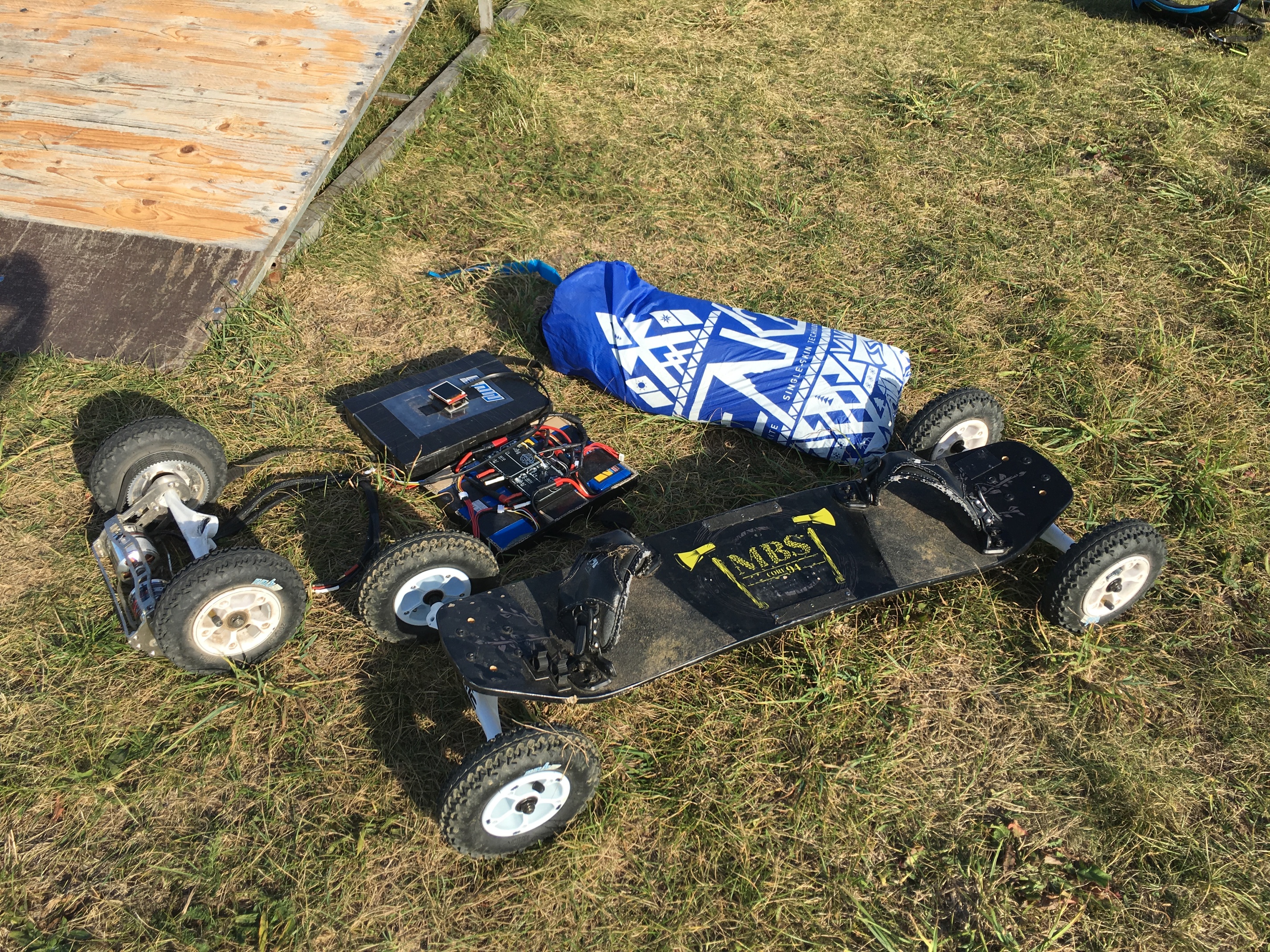 Now, compared to standard landkiting, there many advantages in the e-landkiting. For example, the battery pack is a perfect weight for securing the kite. 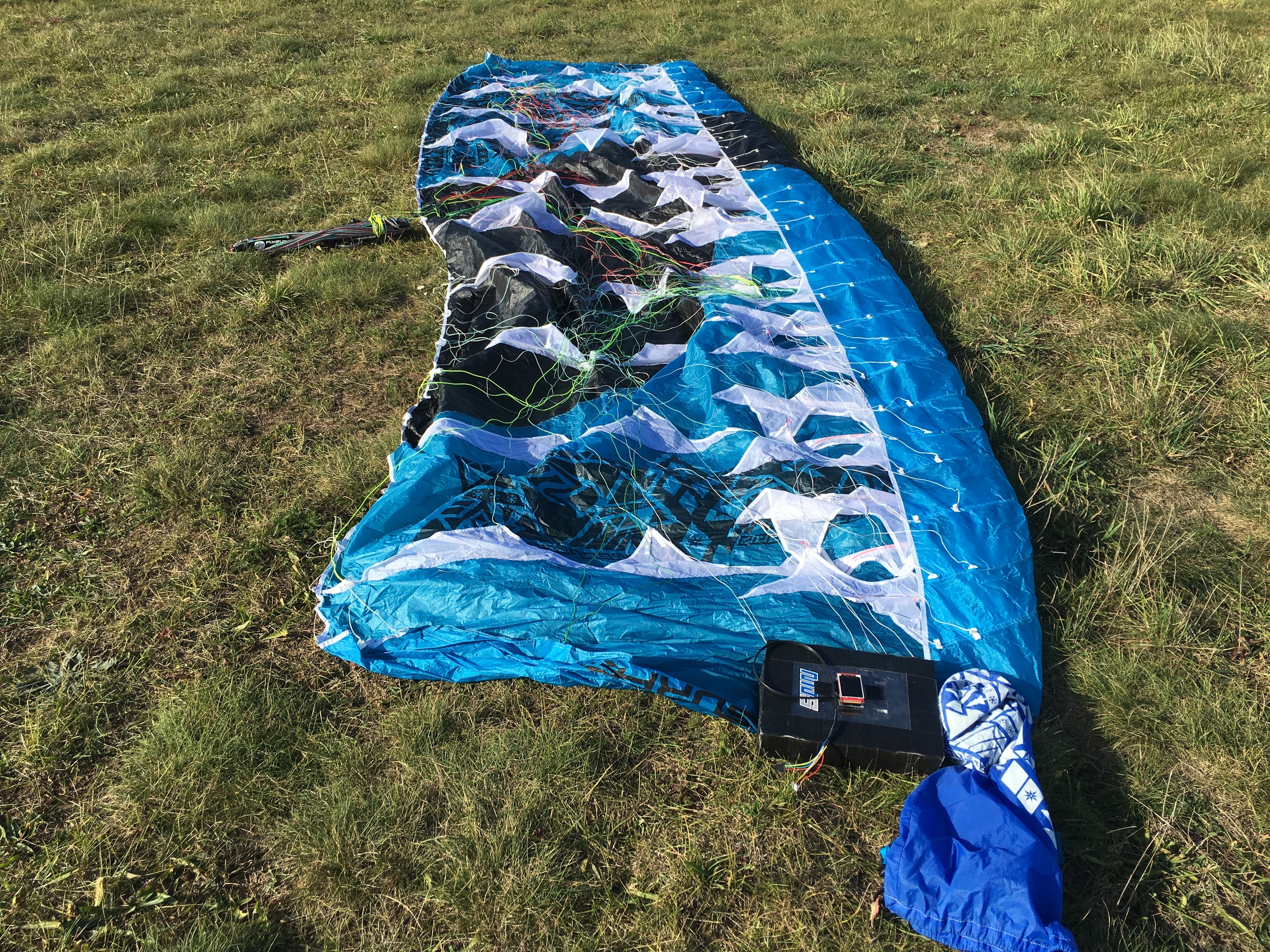 Up in the air. 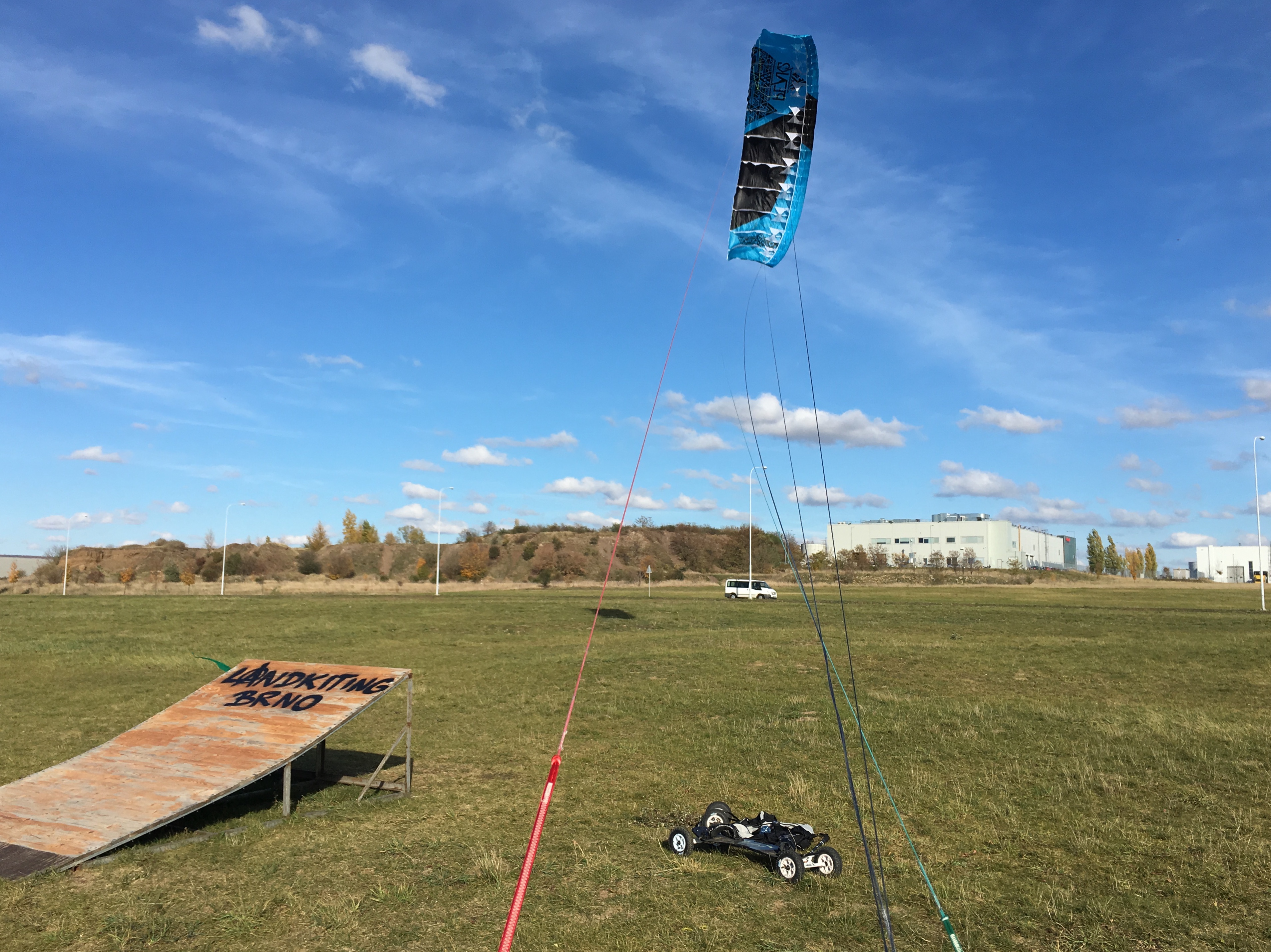 The weather was nice and the wind was very decent. I was going to have a great kiting session, which lasted for whole… 10 seconds.

I fell off my board right after the first start. I thought I must have become really rusty or maybe e-skating altered my landkiting skills. But no, there was another reason. 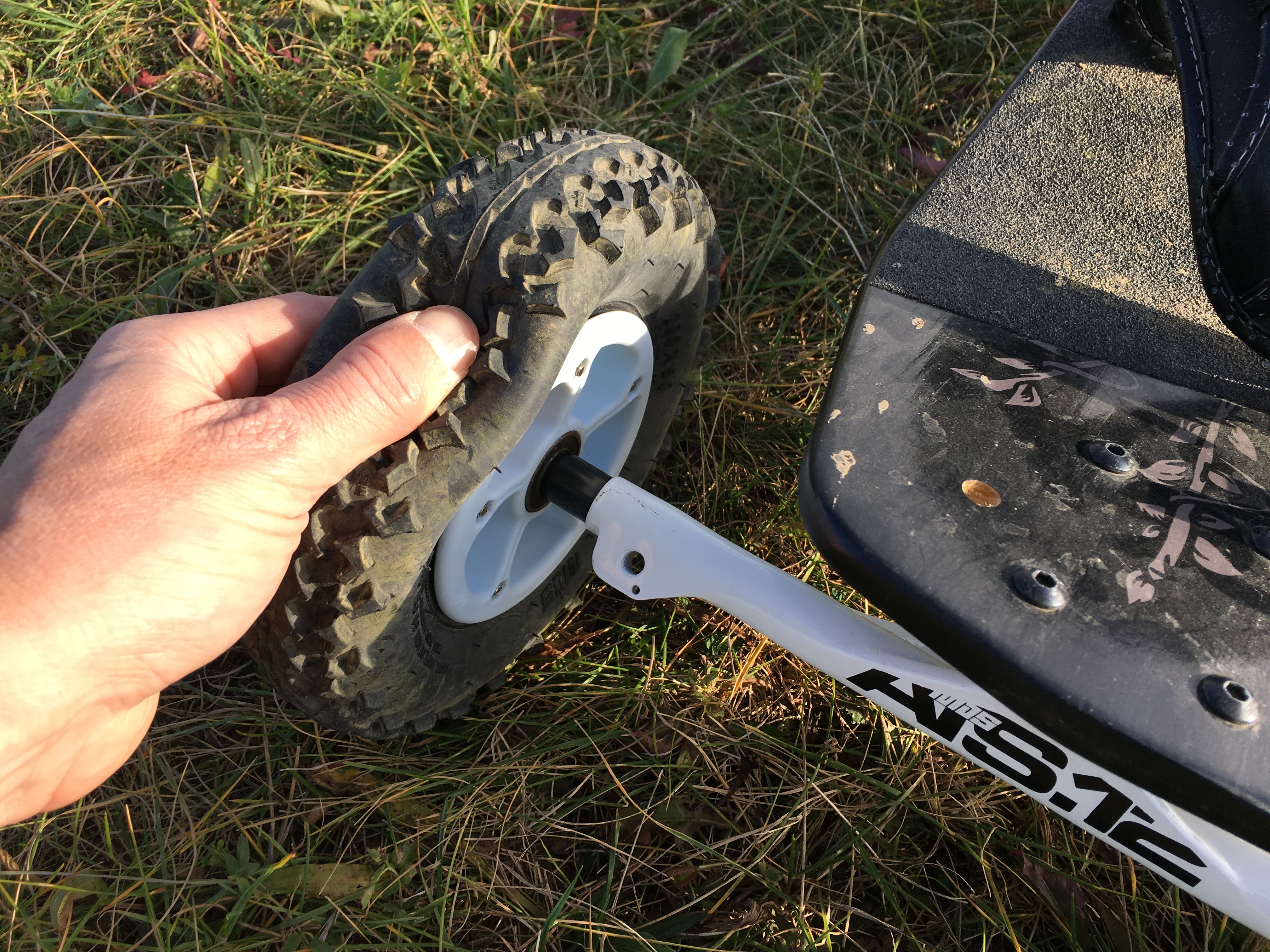 Another great advantage of e-landkiting is that if you get a flat tire, you have a spare… as long as you’re going motorized… and the flat tire is on your front truck. Unfortunately, the same trick doesn’t quite work when going unmotorized.

At any rate, I think I managed to cover some 10 meters on my convertible eMTB with a kite and that must count as e-landkiting! Since I’m not aware of any other attempts of the kind, please let today–31st October 2018 AD–be recorded as the day e-landkiting was invented!

I would like to thank to this great community for helping to make this happen. I would have never done it without you. I want to specifically thank to @rich, @Der6FingerJo, and @AndyBigD for the loads of support!

(Packed up and ready to come back.) 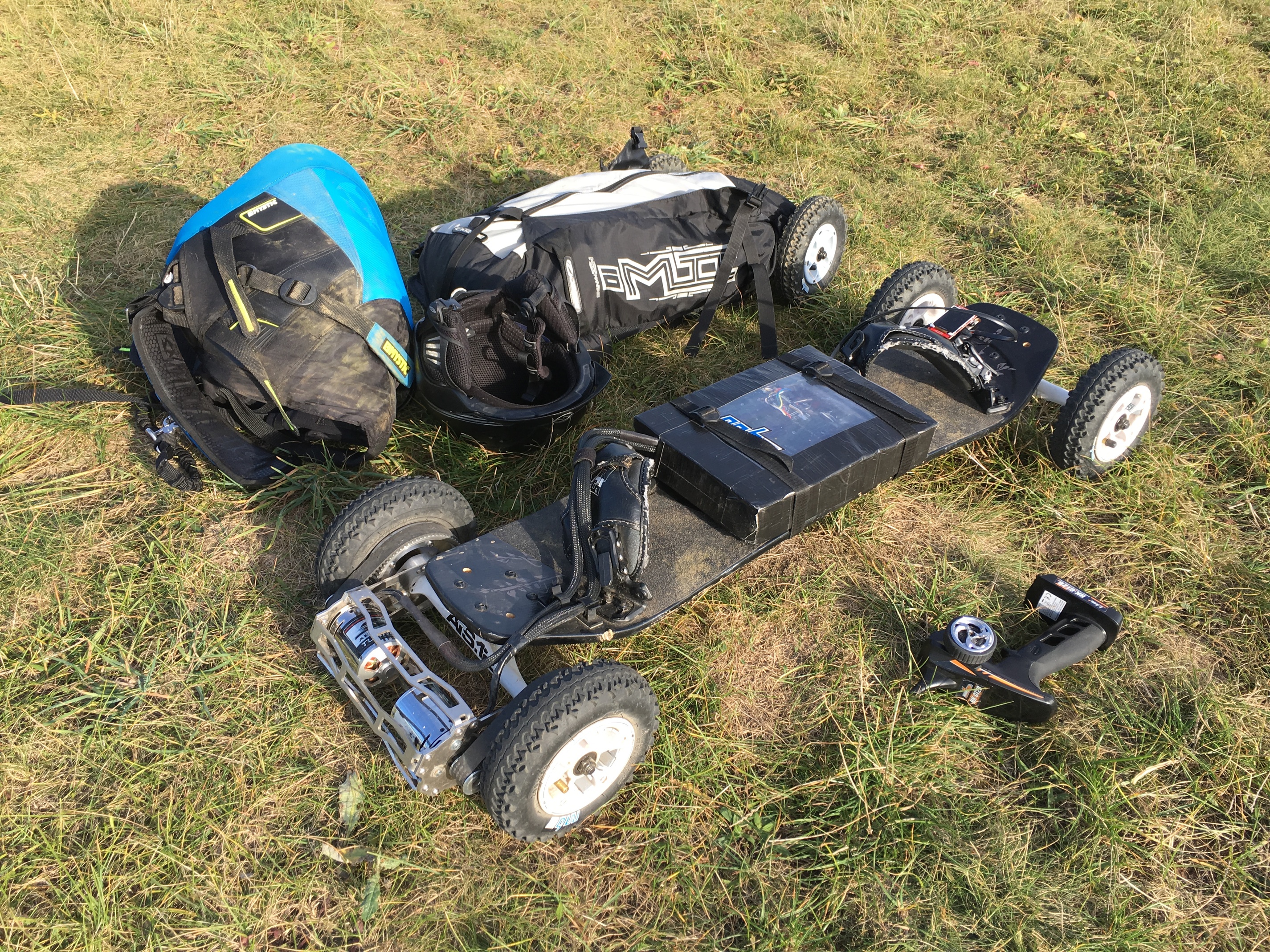 Now, there are still a few things to fix (apart from checking the spare truck tires before setting off). The range, for example. It turns out that with the extra motor that I recently added and with the extra gear weight, the range isn’t quite as good as back on the day I tested that I could make it to the spot and back.

My Dave became extremely unhappy after my 12s LIPO battery voltage dropped below 41V, which was still with 2 km away from home. 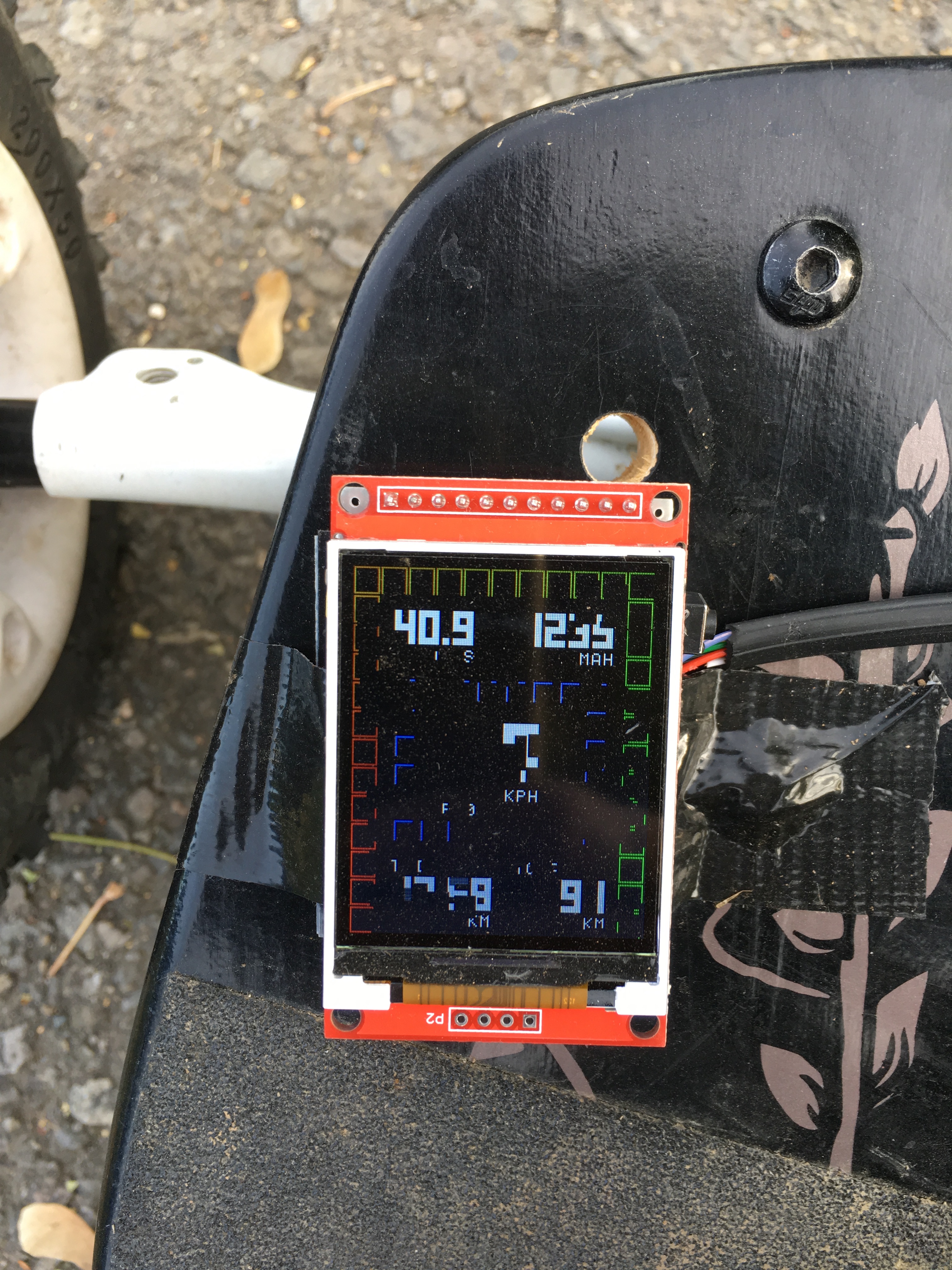 Also, as you can see from the pictures, I took Dave for the ride without any case. That was partially due to my laziness and partially due to the lack of time. I had to take it out of the case few days back to do some developments and it’s not exactly easy to put it back. On the other hand, I could test the display readability on direct sunlight without a protective foil and it’s much better!

It turned out that riding this way wasn’t the greatest idea since I lost the display twice and rode over it once. It was still good for science. The display survived! Great deal for $5.

That i awesome. I’ve always wanted to try kite boarding/surfing.

I feel it might be easier to have a second board on your back for kiting. That way you can leave your expensive esk8 in a field on its own I’m changing my mind while I type this sweet Dave man

I did this a few months ago

Pix or it didnt happen

Only have someone who can witness it.

Sorry bro, I guess @janpom did it first then …

Why do I always lose because of conditions that apply?

That i awesome. I’ve always wanted to try kite boarding/surfing.

You should. It’s at least as much fun as e-skating. Getting started is easier than it seems. Best to get a training kite and learn to fly it. Then get a day or two with an instructor to learn about safety. After that you can go on your own. If you can ski, starting on snow is easiest. Snowboard is slightly more difficult than ski but still pretty easy. MTB on land is harder and water is the hardest.

Good advice, I appreciate that.

I feel it might be easier to have a second board on your back for kiting.

Nah, it’s heavy as hell. Doing the conversion takes 2-3 mins if I don’t need to take pics in the process.

@Blix Could you please share the info about how you convert your board? I thought it was just me and @AndyBigD riding convertibles.

What’s the point of converting it? Can’t you just use your e-board in coasting mode? I’ve done a bit of e-buggy kiting or kite e-buggy-ing, whatever, trying to regen while under kite power. Still a work in progress though!

Can’t you just use your e-board in coasting mode?

If you only want to ride, then maybe. If you want to jump as well, that’s out of question. First, the board would be too heavy. Second, you would likely damage the drive.

For e-buggy that certainly makes much more sense. How does that work actually? Do you ride with the kite all the time and batteries just add power?

Man I kite surf like as much as I can. Love it to bits. Never tried land kiting though. Had some landsurfing experience with a fixed mast on an mtb though. Trouble is if I buy an mtb it will only be a matter of time before it gets power. Need 2.

Still a work in progress. Idea is to use motor for the 300m from house to beach, then either complement the kite power if wind is light, or use as a steady brake if strong. Problems I have: Got two different 14.5" hub motors (for the front wheel). One is geared and tops up at 15km/h. Since I typically cruise around 25/30 under kite power, this gets overloaded and super noisy in the gearing. It’d probably explode if I was engaging the motor. Works fine as low speed, but then it gets boring pretty quickly. The other is non geared, turns super fast when unloaded but its low torque barely gets me moving on hard surface. Works well for my 40kg kid though. I have to feed the motor about 35-40A to get moving, then in about 20s the heat creeps in and performance drops. It’s probably only rated to 20A. So this one can’t be used for initial starting until the kite gets powered with apparent wind. So, still on the hunt for the magic hub motor before I bother dragging all the gear for another test.

On the other hand, Windskating (longboard + windsurf rig windskating) would combine very well with electrics. For the odd streets facing a bit too steeply into the wind. Or for the few cases where footbraking becomes too sketchy. Anyway, so many projects, not enough time!