I’ve been lurking for a while but I recently finished a build I’m pretty happy with, and would love to share it with you guys.

I call it the Pronto Board: 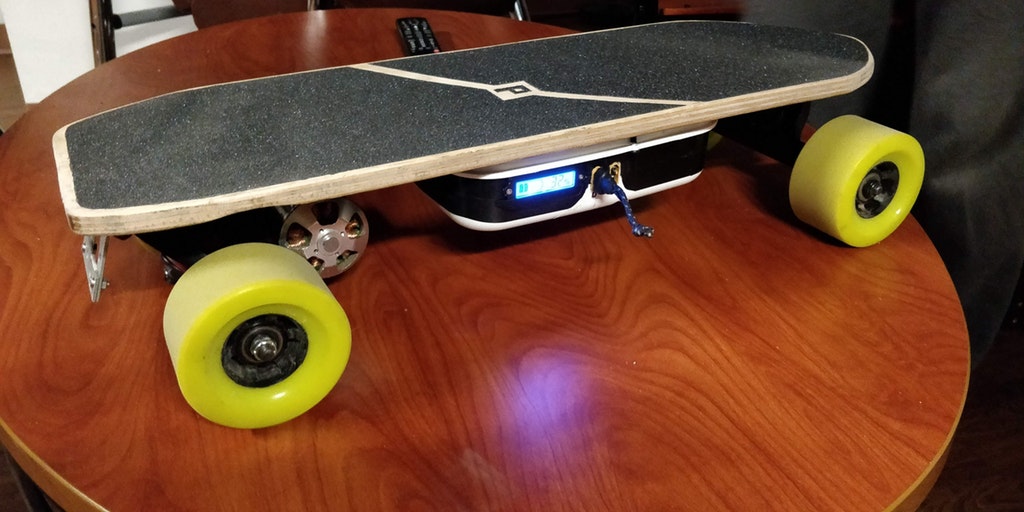 -Custom 24.5" deck cut out of a scrap longboard deck

I’m a college student and wanted a board to comfortably cruise around campus. I usually go max 10-12mph, and wanted to be able to make sharp turns.

I had a 32" cruiser DIY esk8 in the past but even at that size it was too bulky to carry around. And whenever there was a corner too sharp I had to pick up the board and rotate it myself which was a PITA.

I wanted a deck with no kicktail to maximize wheelbase while minimizing deck length. There were a few options online but in the end I just cut out a custom deck. It’s sort of a non-traditional shape, but I’m an engineering student so function >> form.

For the enclosure I was planning on molding a custom Kydex enclosure, but I screwed that up and couldn’t get the corners to shape properly. So I just walked over to the nearest store and found a nice plastic lunchbox.

If you’re wondering what that metal bracket is, it was originally added to help it stand upright, but I later removed it because it’s kinda sketchy to have a sharp metal edge on the back of your board.

The remote is a custom GT2B case mod I whipped up with a laser cutter.

This thing is as fun as it is scary to ride.

Wow dude this is really neat. I wish I had an unlimited budget so I could build every board I saw, I i will foreword this to anyone looking for a good school board. May I ask what your budget was? Thanks and happy Esk8ing.

I actually had built this out of parts from my old esk8, but I would say this probably cost me around $400 to build in total

Hey man, looks awesome! I’m an engineering student too, totally with you regarding function over form design. I’m building a board very similar in spec to your board, same motor and 10s2p battery. I’m considering buying a hobbyking VESC. What are your impressions of the one you have?

How did you manage to fit 40 cells in that case?

Nice! The HK VESC hasn’t caused me any issues so far and it’s probably got a couple hundred miles on it. Just seems like a normal VESC. I’m not doing anything fancy with it though - standard BLDC.

Yeah it was pretty difficult to get it all in, there’s hardly any room left in the case

I’ll take a picture next time I open it up. There’s hardly any space left empty. I’m using two of those eBay battery packs that were floating around a while ago.

The case is the one thing I might upgrade in the near future. Not sure how much I trust the lunchbox to not crack. I have some Kydex lying around, but I spent half a day trying to mold it properly with no success. Will have to wait until I get a chance to build a proper forming rig.