Has anyone ever replaced the steel axle in their caliber trucks? I was wondering if that would be a relatively simple way of widening the axle length: Get a 8mm steel rod Remove old axle with hammer or vice Push rod in adjust to desired length Cut outside thread with thread-cutter

People have removed axles before but I couldn’t find anything about adding longer ones afterwards http://www.skatelogforum.com/forums/showthread.php?t=33587

You can’t do that on caliber trucks because the axle is cast in. The knurls are different from the ones you showed. The knurls from the image you showed are from trucks that have axles pressed in. Ronins for example have pressed in axles and I was able to increase width by adding a longer axle. On caliber since they are cast in axle you would probably destroy the hanger trying to remove the axle.

I wonder if you could cut off both ends of the axle, clamp it into a drill press and drill out the axle?

I have had good luck cutting and threading the axle of my calibers and using a coupler and bolt to extend the axles. I havent been able to use it often because of the rain but it held up well on my 8 mile ride to work and 8 miles home a few times a week. Been trying to figure out a way to make a dual set up with the Ollin motors. The first hurdle was to find an adjustable mount to fit the motor since it wasnt a normal 30mm. The second was to either find a RKP truck long enough for both motors or an...

The elusive extra wide caliber hunt! @korryh might be onto something with the axel extensions.

The problem with widening the hangar is that you are effectively multiplying the bending stress. Calibers are relatively easy to bend as is. Modifying them to be significantly longer would likely have you skating on bananas in no time.

How much wider do you need to go? I’d suggest looking at Surf-Rodz RKP. Their 200mm hangar with the 70mm axle kit gets you a total width of 240mm. (Forgot to add: their first versions of the TKP Hex - called INDeeSZ at the time - used the same extendable 10mm axle kit. So you’d also be able to get super wide. This is a much easier geometry on which to mount your motor, but you’d have to find a used pair from the 2010 timeframe)

They also used to sell axle extensions that would slip over an 8mm axle, extending the width and converting it to a 10mm axle. Probably tough to find now, but the e-sk8 crowd would love them…

Not unless you CNC a replacement Caliber truck from 2023-T351 or 7075-T6. The trucks would handle more bending stress.

Making your own trucks is a whole different ballgame. No need to reverse-engineer a Caliber truck. At that point, you might as well customize the hangar specifically for mounting a motor. You could get rid of the clamp entirely

AFAIK the hangar itself does only little in regard of keeping bending from happening. That means that if you choose the right material for the new axle bending should not be an issue. With a new axle one could upgrade to stronger steel than the stock one.

Question is how to remove the old one on cast trucks… 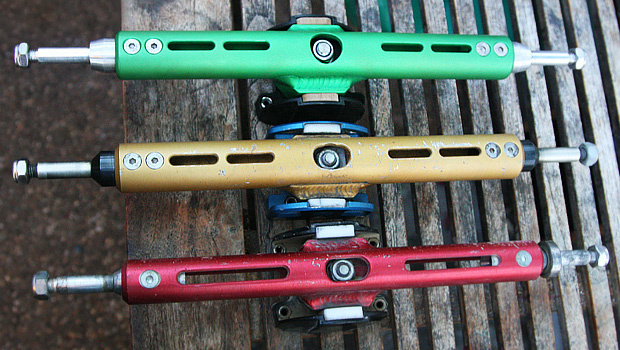 This looks like some next level stuff… but pricy of course… dirt pipe 2.0 it is called I think. I like the idea about switching out the axles at the ends

just finding a longer truck/axle is not that hard - the problem is the motor mount. I want to be able to just use readily available caliber mounts - so the hanger shape needs to stay as it is now.

Well instead of a longer axle this could also work: 3D printed 6" pneumatic hub [quote=“Maxid, post:12, topic:18690”] just finding a longer truck/axle is not that hard [/quote] Really. You got any examples?. Seems very few longboard trucks over 8" or like 200mm on the hanger. Unless you go to evolve or a mountain board truck.

I like the idea of the wide offset hubs, but it only helps guys with pneumatic wheels. If someone made a 97mm PU wheel with like zero of set on the inside, that would probably work for me. Would give me that extra 10mm I need.

Unless you go to evolve or a mountain board truck.

Exactly - those are wider trucks for example Also see:

Hi Tito, i see you have experience on this matter, i hope you can help in the process of changing my ronins axle, i have couple question: Should l do the thread on the axle before or after i put the long axle on the truck. Can you recomend which kind steel should i use? Do you think i can remove the axle in a vice or its need it a press?

I was able to remove axle by tightening the wheel nut with some spacers in-between. The stock axle has knurls which should be on the “n” side. Make threads before installing and I used 17-4 hardened stainless steel

Suuuper!! now i’m more confident about to make it, the trick of the “N” side is gold. Thanks Tito!!!

Yeah you should see some small indentations on new trucks where the knurls were pressed in. The extended axle has come in handy recently as I’m testing some 3d printed 15mm pulleys with support bearing