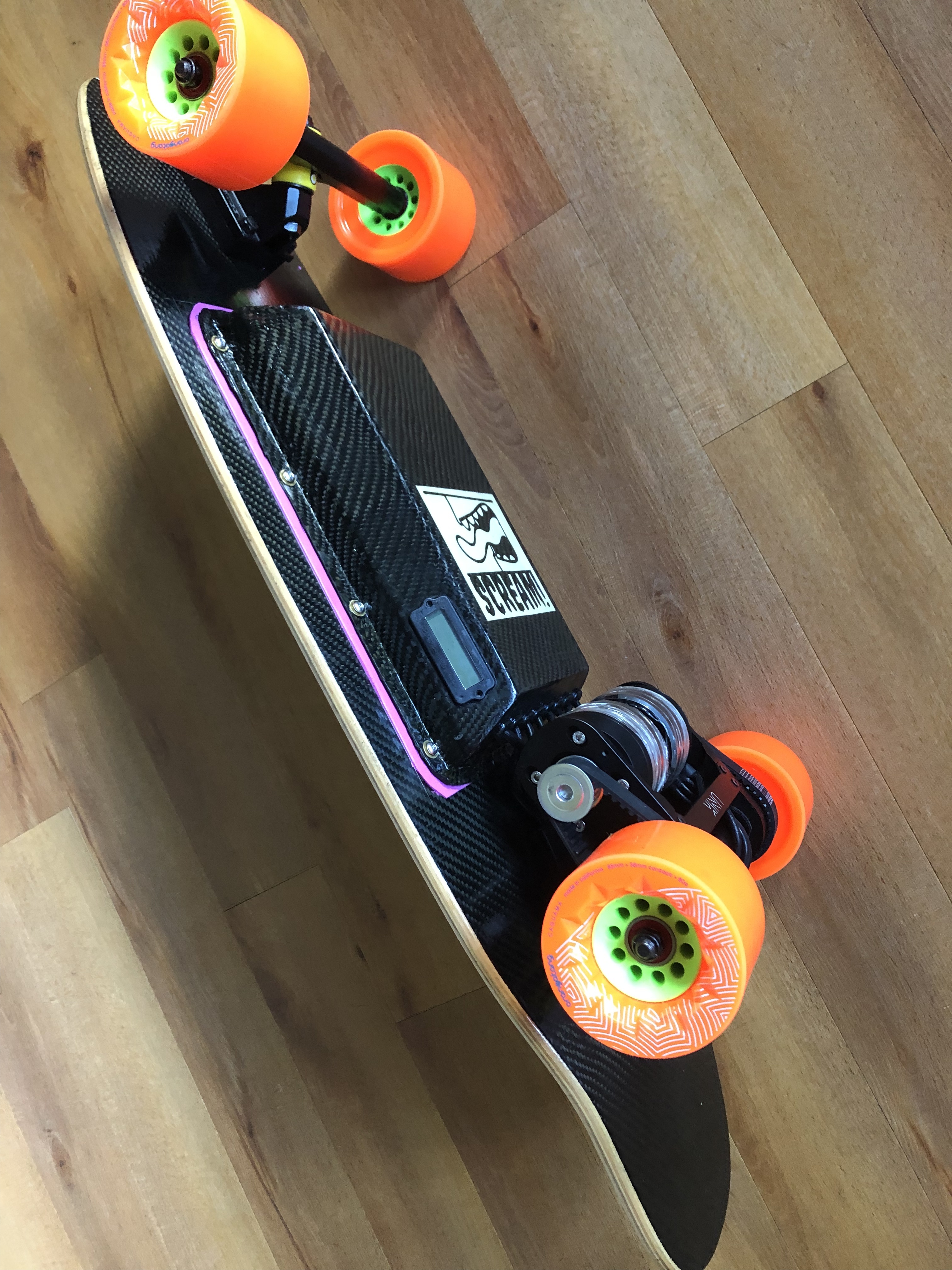 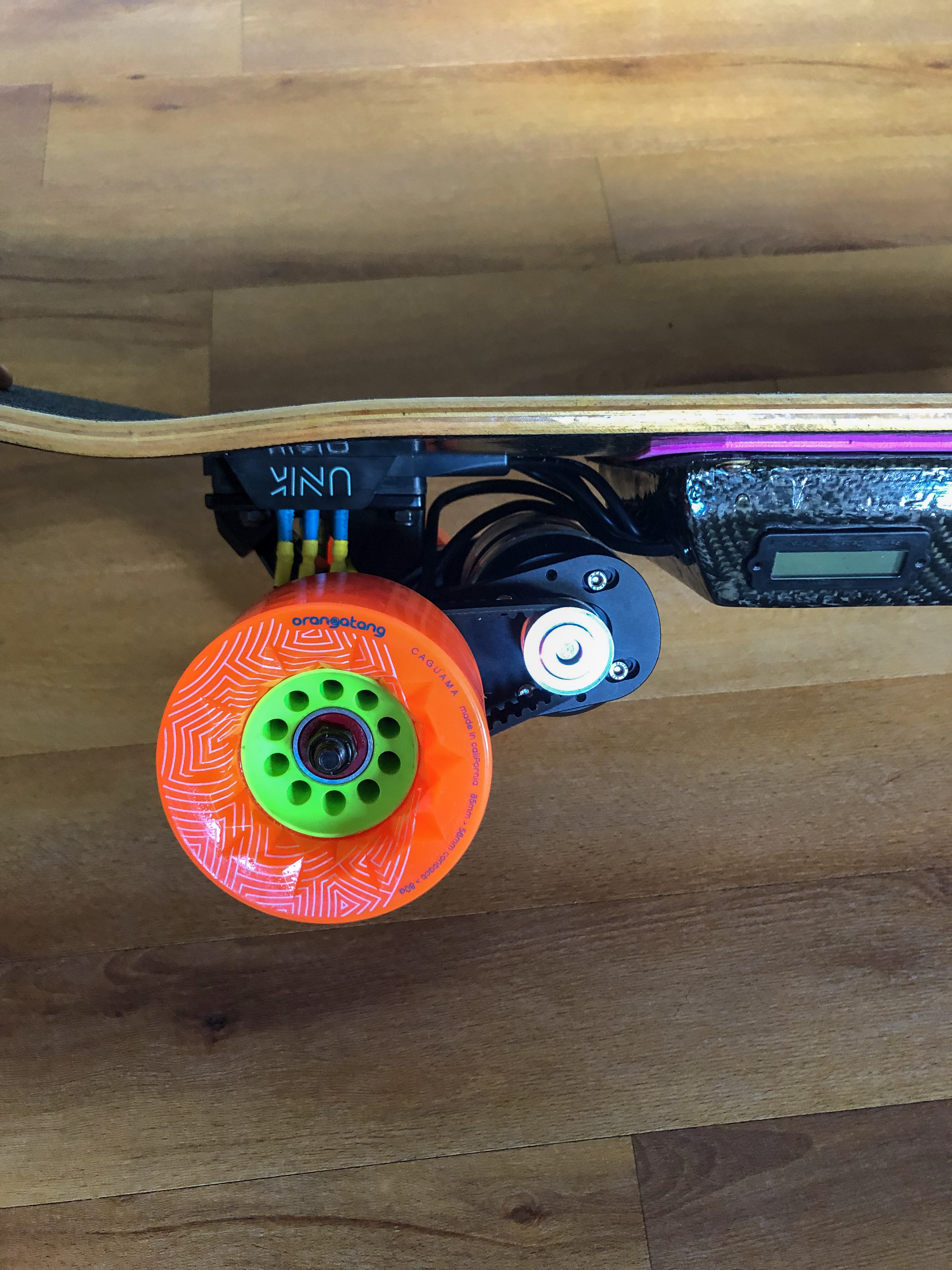 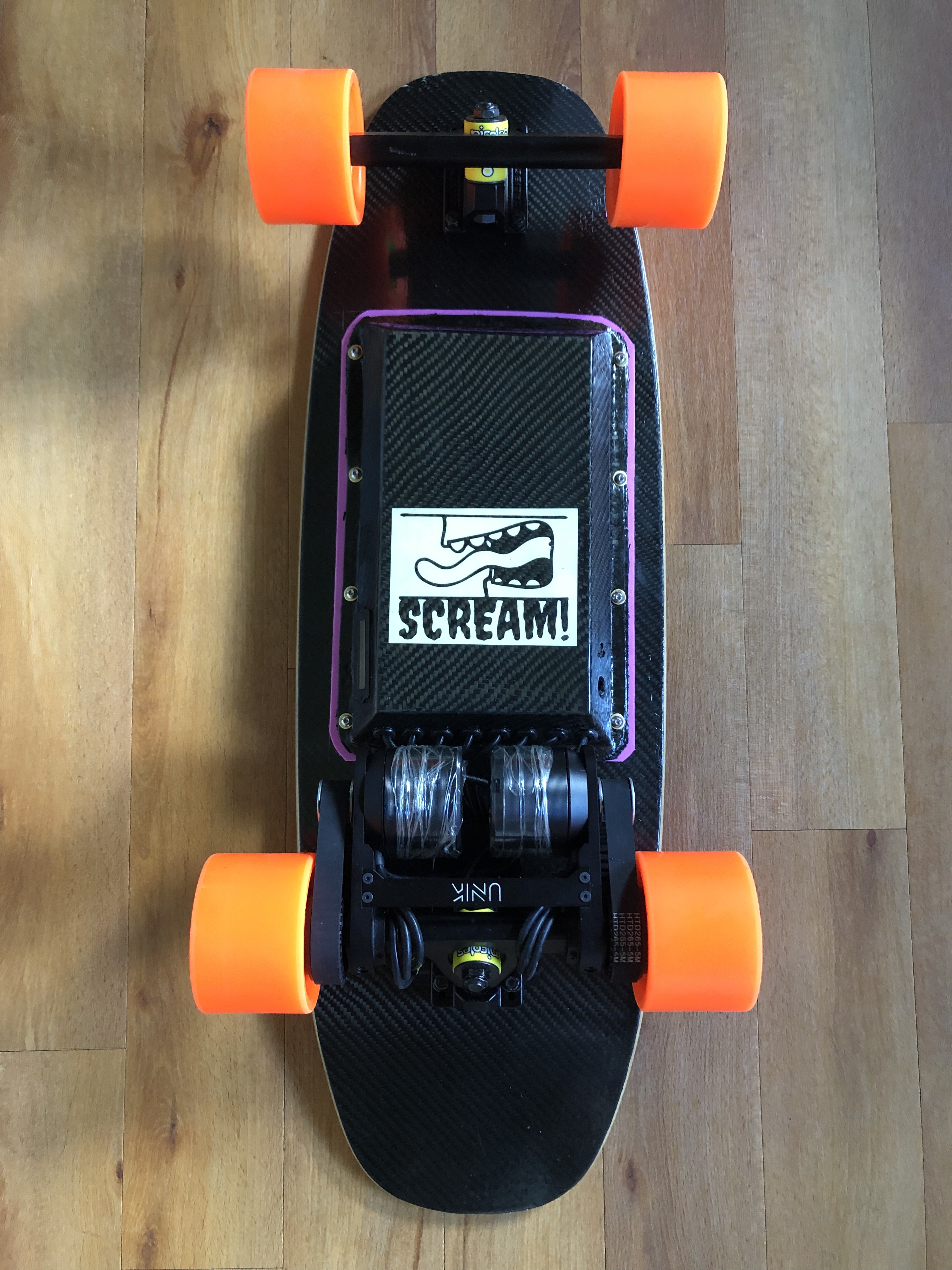 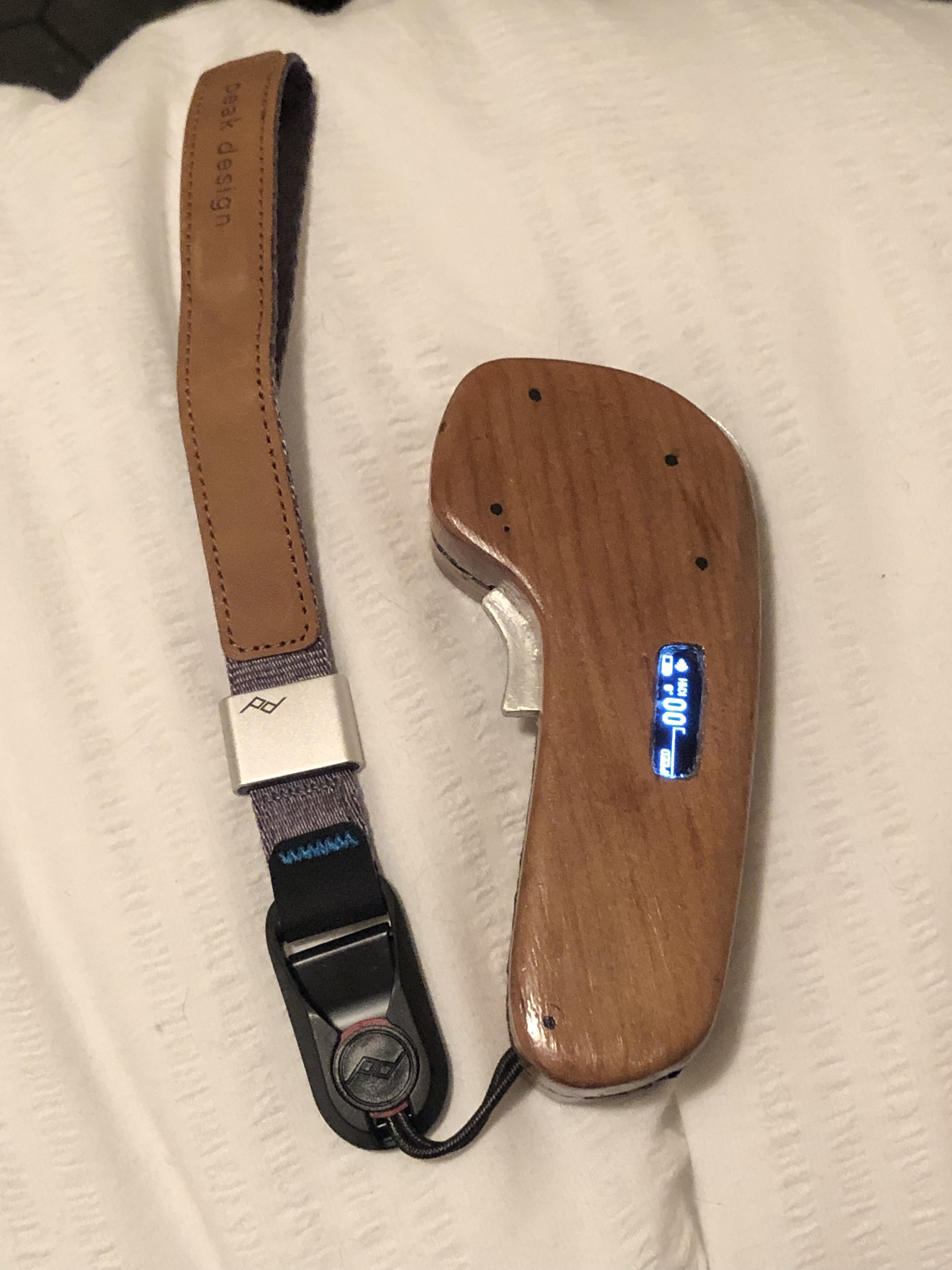 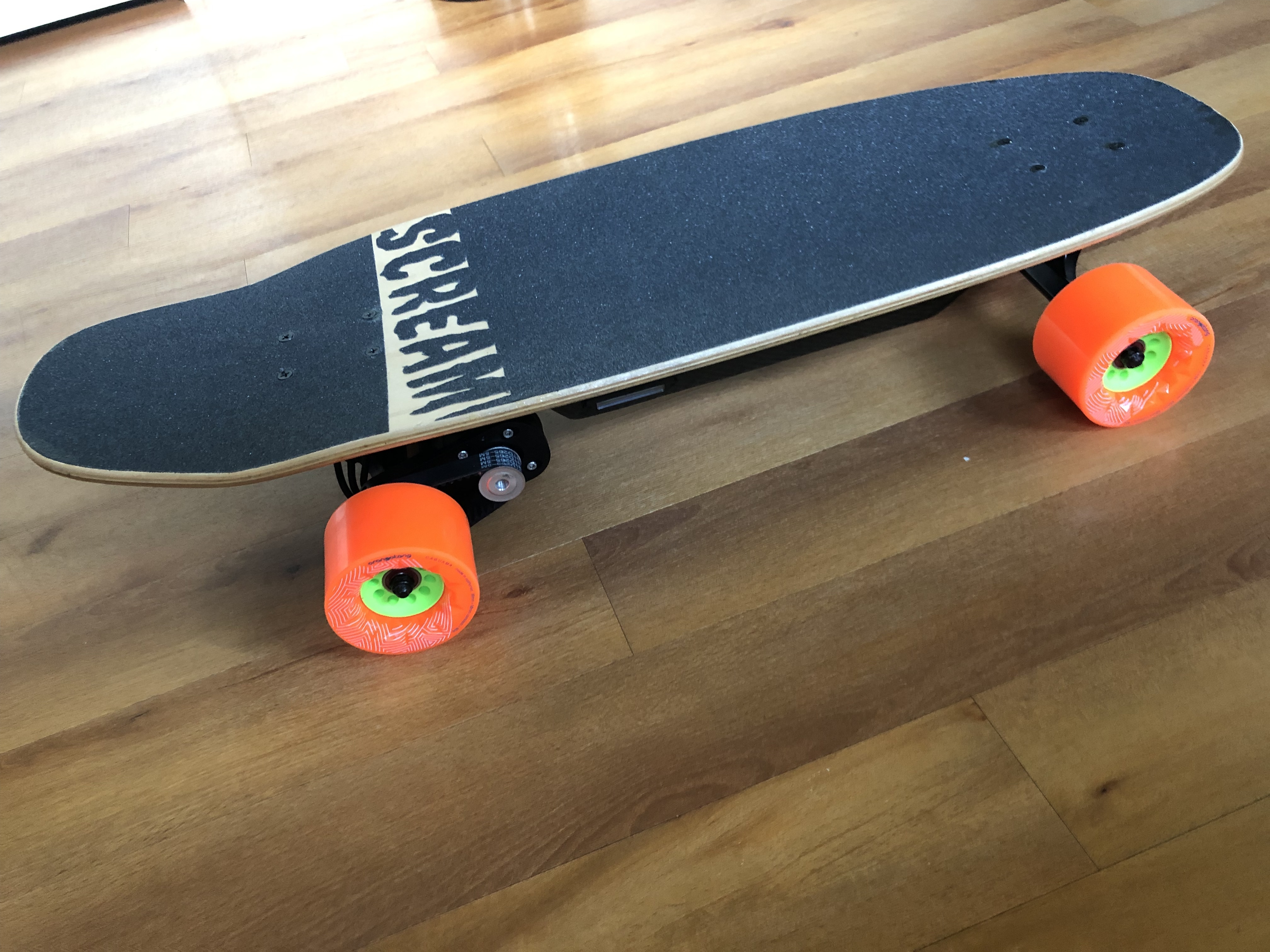 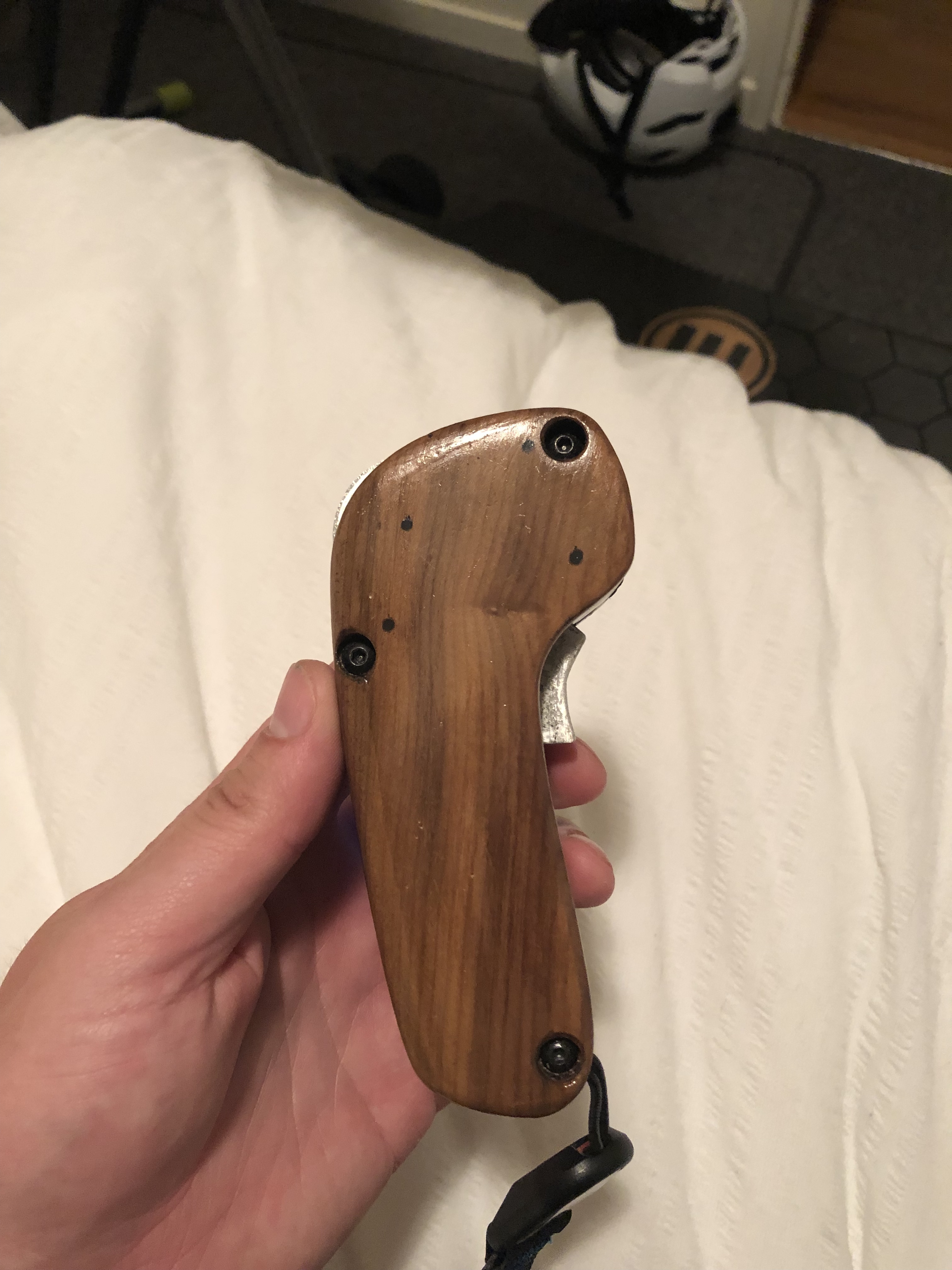 With the benefit of hindsight, it’s now easy to see what a fool I was.

I actually thought my first build would knock it out of the park so well that people would be contacting me asking me to build them a board. I’m thankful that I resisted the urge to order extra parts for all the orders that were gonna roll in. F—k that. I’m taking at least a month off building electric skateboards.

It should be fairly obvious where the inspiration came from. I wanted a boosted mini. But I wanted to build it myself. As a first build, my original intention was to go basic. First plan was full TB kit, with an aliexpress battery because getting batteries to New Zealand is pretty close to impossible.

Creating a boosted mini clone, the calibers and Orangatang wheels kind of chose themselves. I went with Caguamas, cos why not?

Turns out wheel bite is why not. As a result my riser game means my board can double as a mobile scaffolding platform.

The Caguamas came from evolve in NZ and it they had a package with the evolve kegel wheel pulleys so I went with those.

Not sure if the recommendation for the deck came from this forum but basically I found a discussion online where someone was asking about buying a boosted mini deck and the carver proteus was one of the decks recommended.

I decided to make my own enclosure using carbon fibre and a DIY vacuum press setup. Basically just made the shape I wanted out of insulation foam, laid a couple of sheets of carbon fibre over it, spread a bunch of epoxy resin over it, peel ply, breather ply, then chucked the whole lot in a vacuum storage bag overnight. I got a decal cut out with my SCREAM logo and stuck that on, then did a few coats of expoxy and polyurethane.I also did a single carbon fibre layer on the base of the deck.

None of this turned out how I wanted. The polyurethane yellowed and made the scream sticker look pretty average. Getting a perfect finish proved to be a bridge too far. In the end I gave it a final sand, slapped a thick coat of polyurethane on it, and reminded myself it’s all gonna get scratched to f—kery eventually anyway.

I used stainless inserts in the deck, and stainless bolts with brass washers. For griptape I went with MOB and cut out my scream logo.

I read a bunch of discussions online about the best mount for calibers and settled on the UNIK core series dual caliber mount. It’s pricey, but I can really see the benefit. Even if it bends or comes loose I think it will still function due to the crossbar setup.

Going with the UNIK setup did mean I had some issues with spacing. I was really nervous that the 113mm crossbar wouldn’t fit 6354 motors so I went with the 123mm crossbar. With 15mm belts and the evolve pulleys I thought I wouldn’t have enough space on the standard caliber axle. So I ordered one e-caliber truck.

I had to cut the hanger down to fit the evolve pulleys. I did this in my drill press with a file. I butchered it a bit, and ended up cutting into the axle.

Funnily enough, when the motors came I reckon there’s more than 10mm space between them, so I probably could have stuck with the 113m crossbar and a standard caliber II truck. I’ll probably end up doing this if the e-caliber axle bends due to my excessive filing of the axle.

When the Unity got announced I jumped on that ASAP. It was certainly more than I budgeted for an ESC but having already decided on the UNIK mount I felt like I should take a more premium approach to my build.

I seriously considered ordering a battery from aliexpress, and even built my first enclosure with one in mind. However with space at a premium on the Proteus deck, I really saw the value of using premium cells (Samsung 30Qs) and being able to configure it in an arrangement which best fit the available space.

I had great fun building a spot welder. It’s rugged as, but hey, it’s not a skateboard so I don’t have to bash it against a brick wall for 30 minutes. Best part was picking up a microwave from a scrap metal dealer, and sh-tting myself while removing the transformer. I was so relieved when I dumped the leftover parts back on the scrap heap. While researching I just read way too many stories about people dying from electrocution from high voltage microwave capacitors.

The main working part is the transformer, but the timing circuit, 9v transformer, welding pen and footswitch are all aliexpress. If anyone is looking to order one of these timing circuits, little tip: the circuit requires an AC step down transformer - it won’t work with a 9v battery. I think this is something to do with timing the pulse. 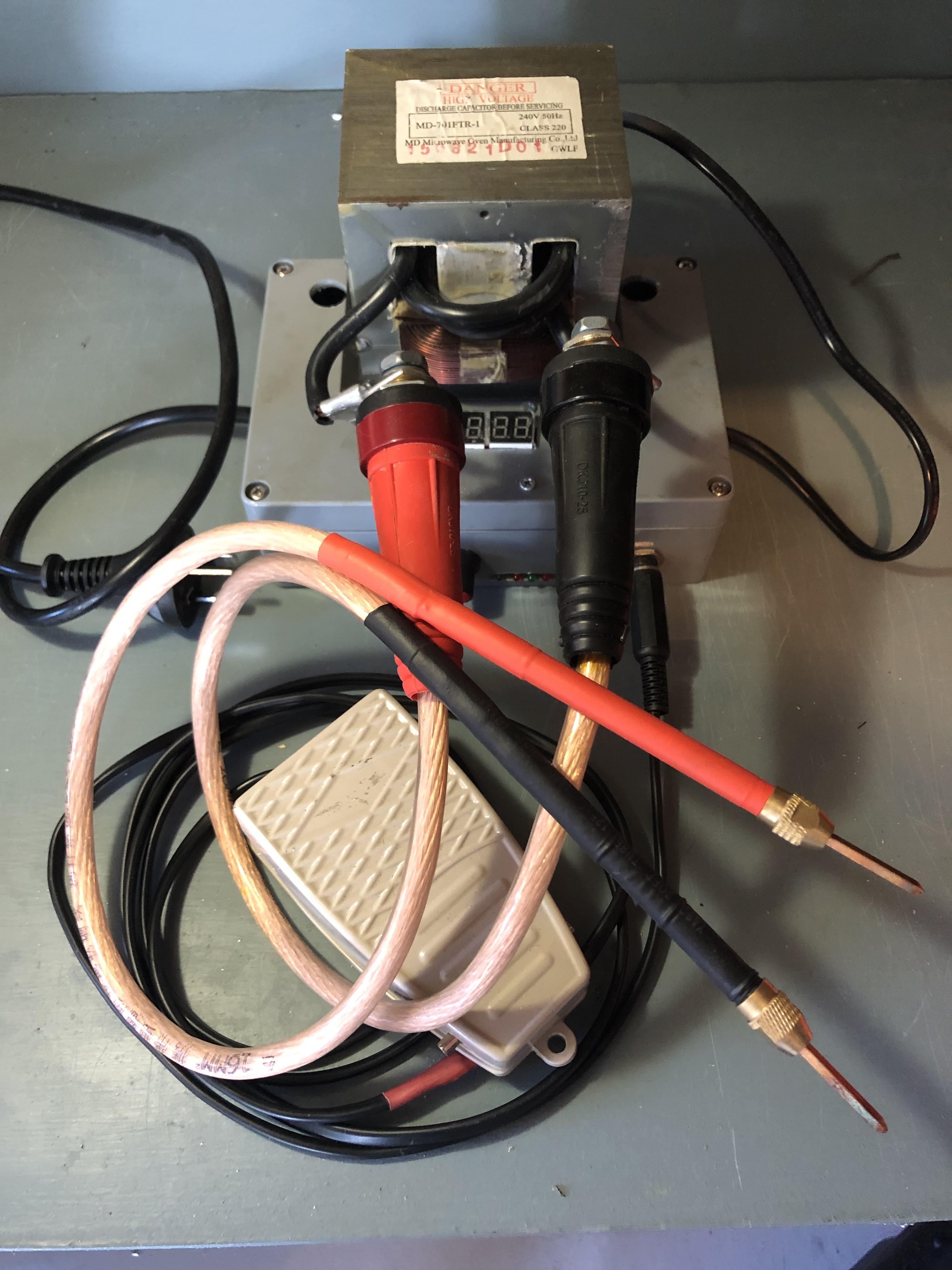 I went with a single 8mm by 0.15mm nickel strip for parallel connections, and two flat copper speaker wires for series connections. I folded a thick piece of insulation board around each p group and then shrink wrapped it. I couldn’t find any really large shrink wrap to wrap the whole battery. So I held it together with a few wraps of kapton tape, kapton tape to insulate the terminals, then a single piece of duct tape on each side. 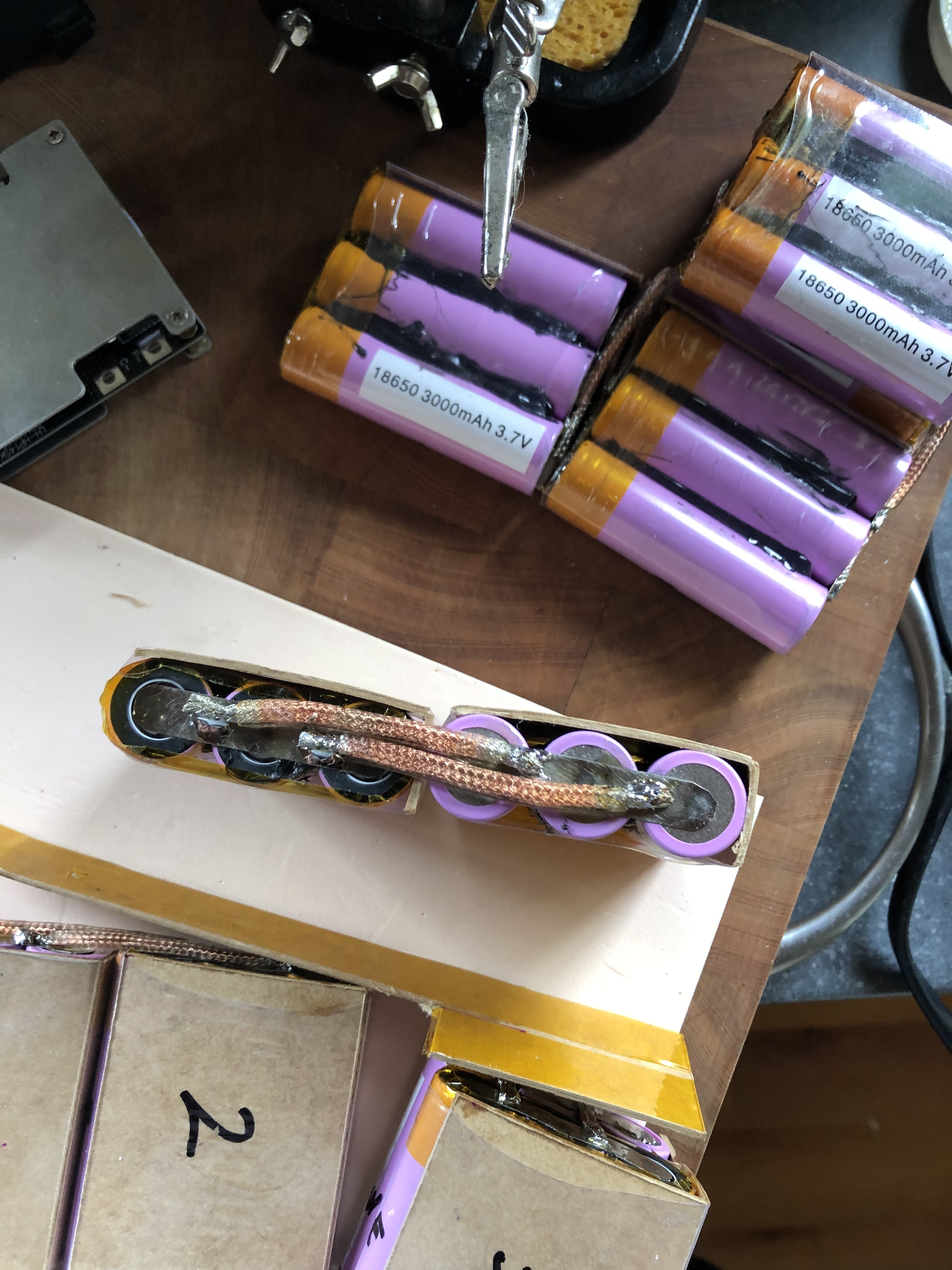 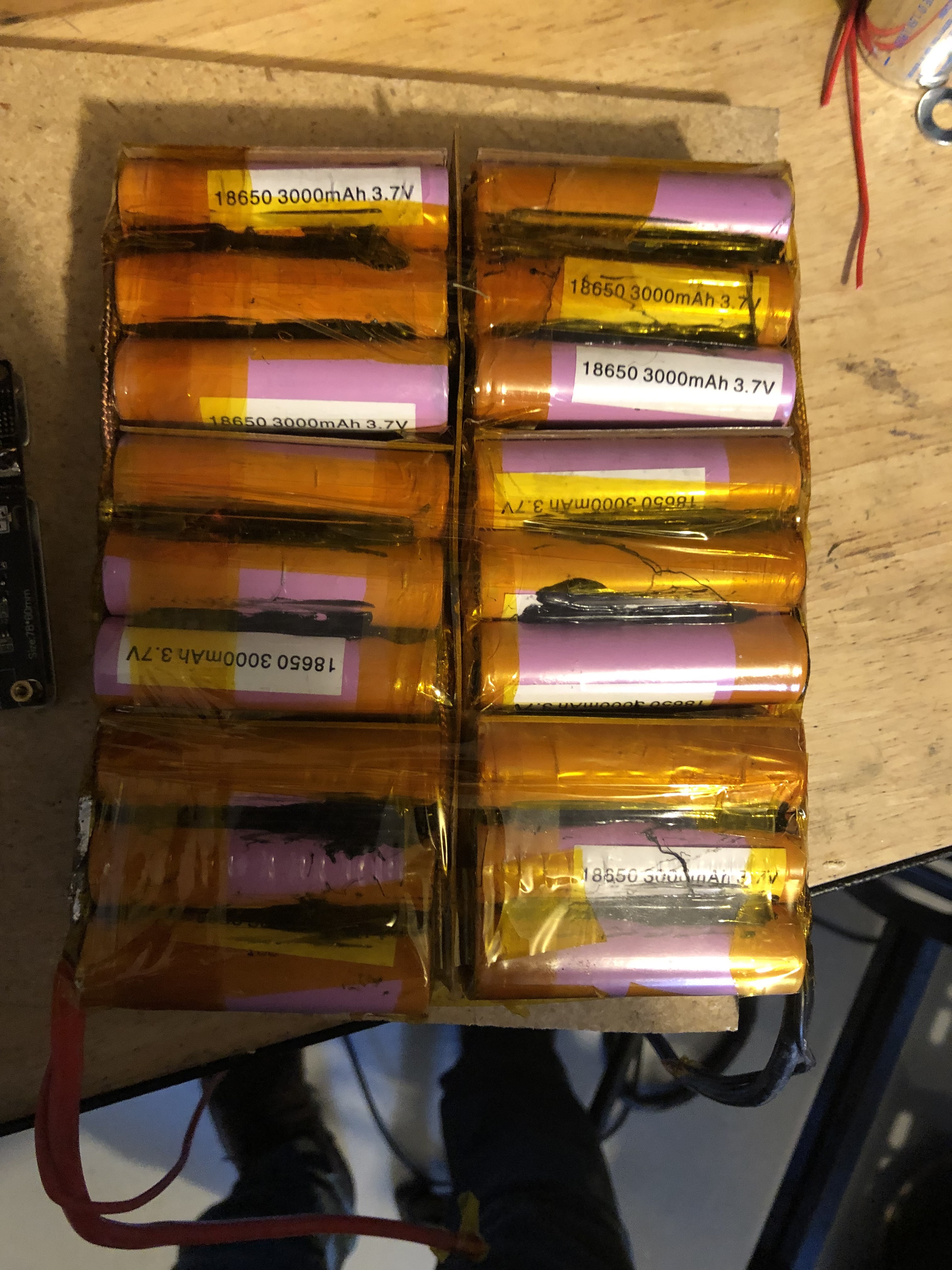 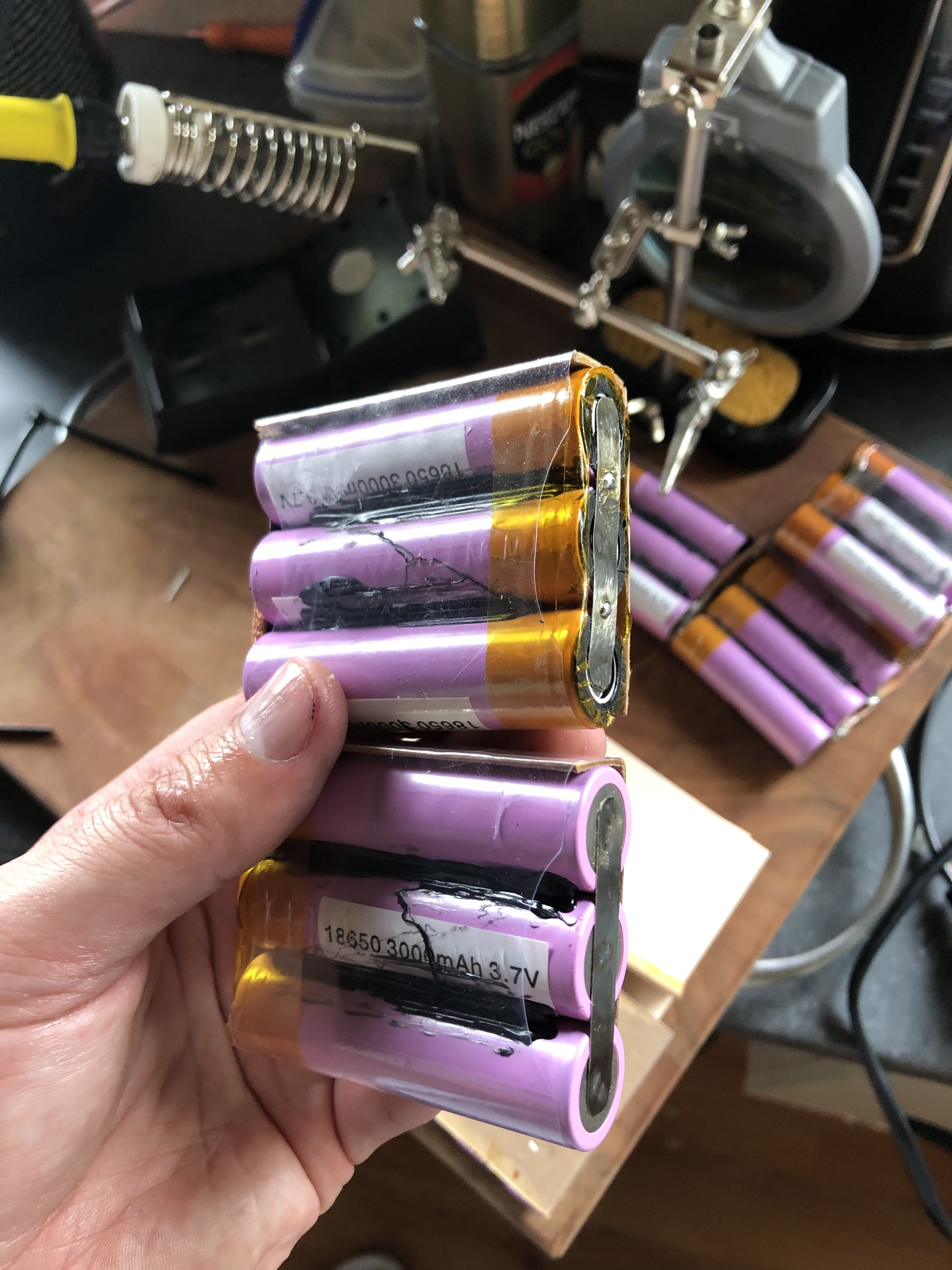 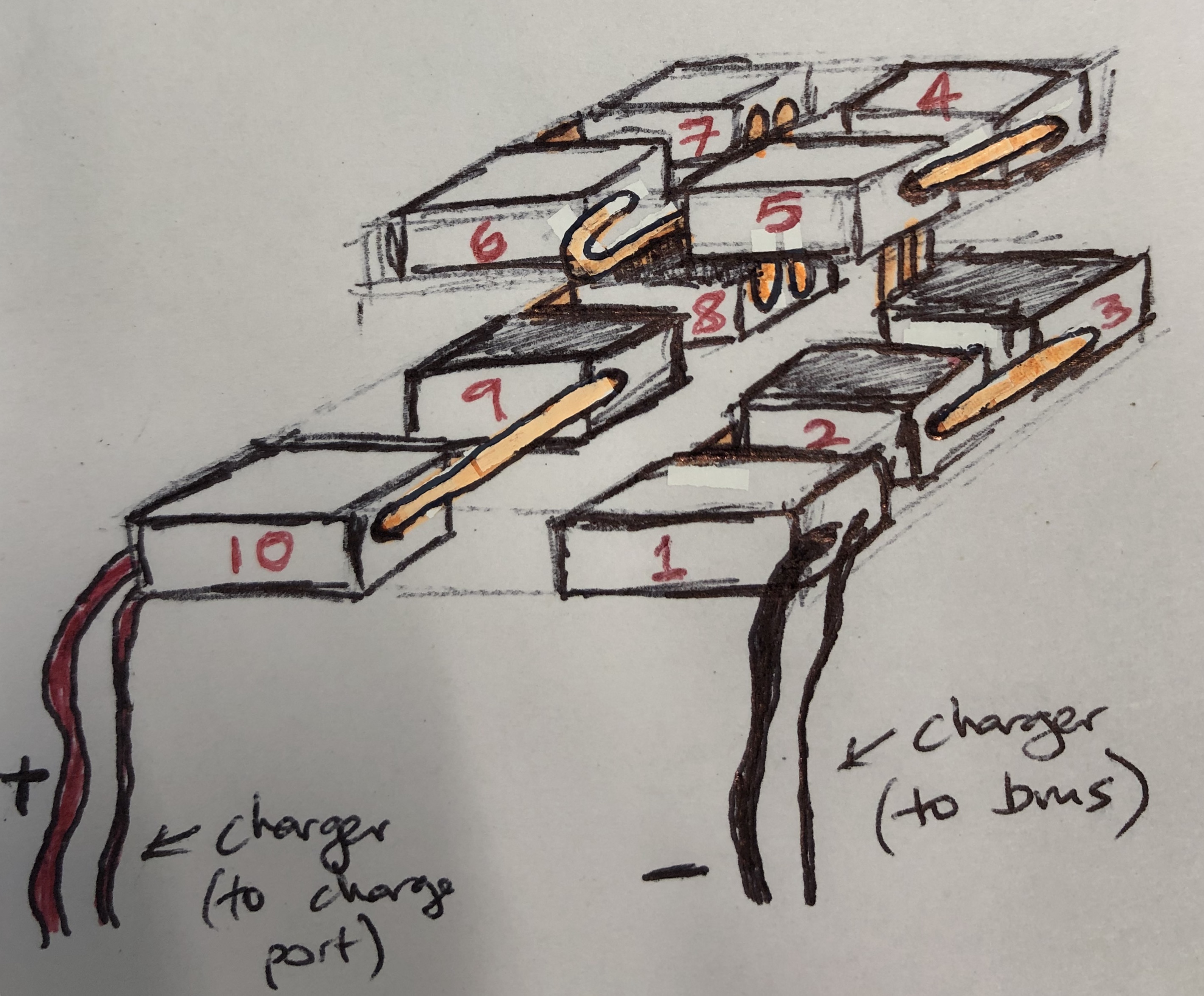 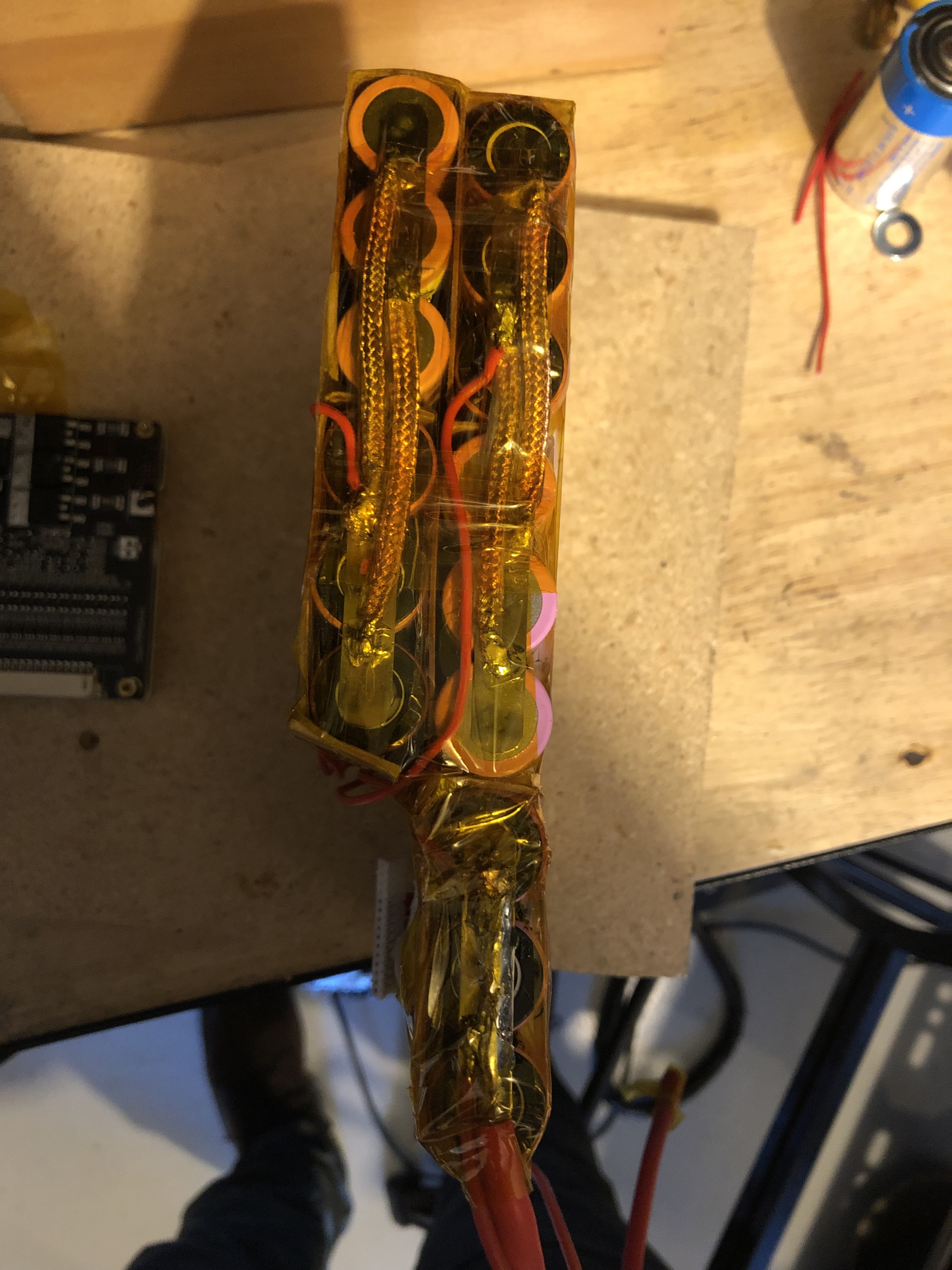 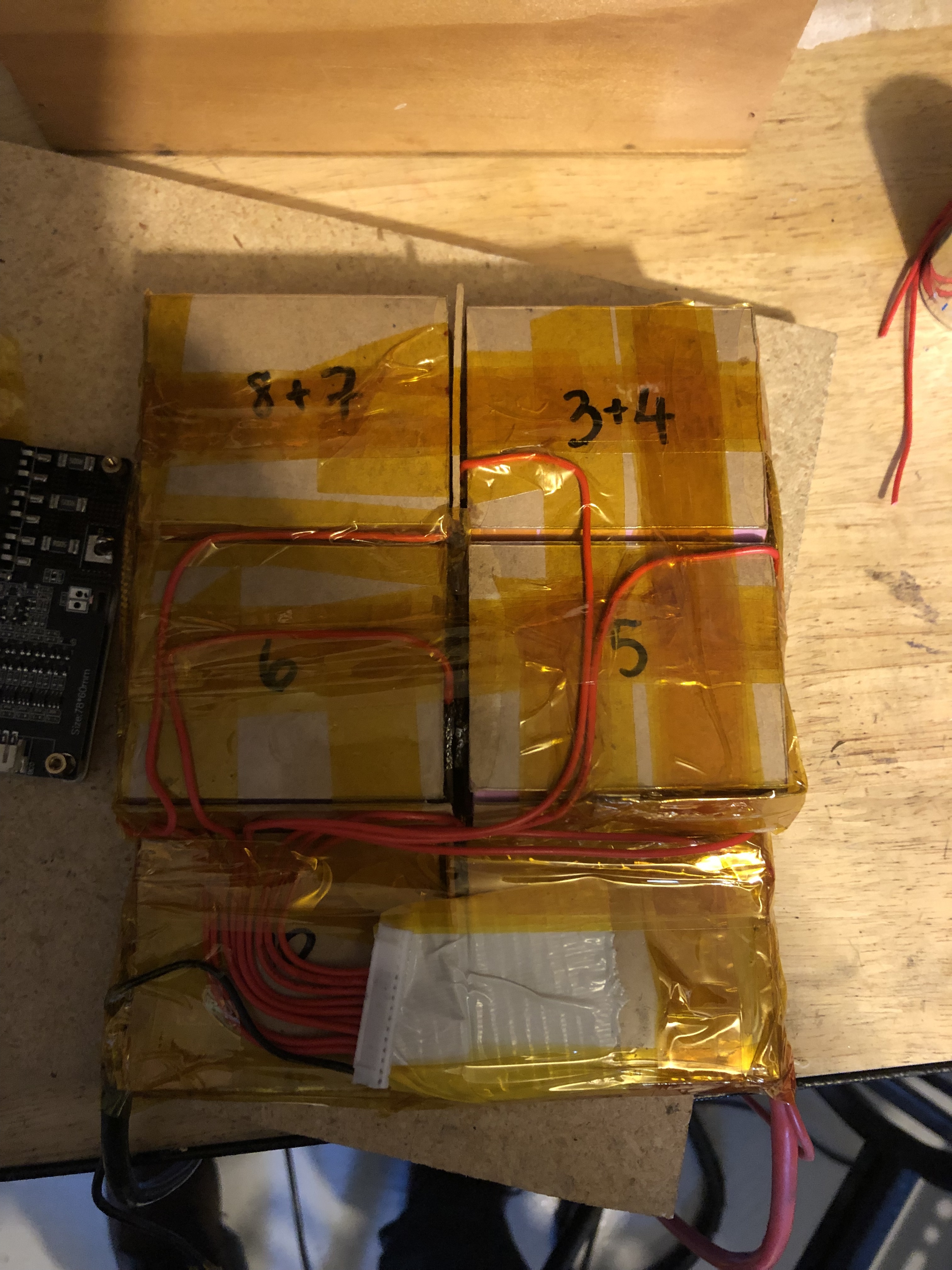 BMS was a cheapie from aliexpress. I blew the first one up by connecting the balance harness while the battery negative terminal was touching another part of the bms board. The second one came relatively quickly, which was a relief (especially around Christmas). It wasn’t charging, which did my head in as I thought I’d blown another BMS (minor short/spark during installation). Turns out I blew the 5 amp fuse I’d attached to my charge port (thanks @b264). I think this is from the charge port I was using (it was a metal one) getting bent out of shape by the other internals in the enclosure and shorting. It’s a good thing the fuse was there!

I was nearing the end of my build, and kinda exceeded my budget so I couldn’t resist the temptation to cheap out on motors. I went with flipsky 6354s. I was aware of the issues people had with the 6374s but hadn’t really heard anything bad about the 6354s. I stupidly ordered them just before Black Friday, when pretty much everyone’s motors dropped to the same price as Flipsky’s.

I did have an issue with the flipsky motors. Running motor detection on the Unity, I get this result… which follows the faulty motor if I switch them around: 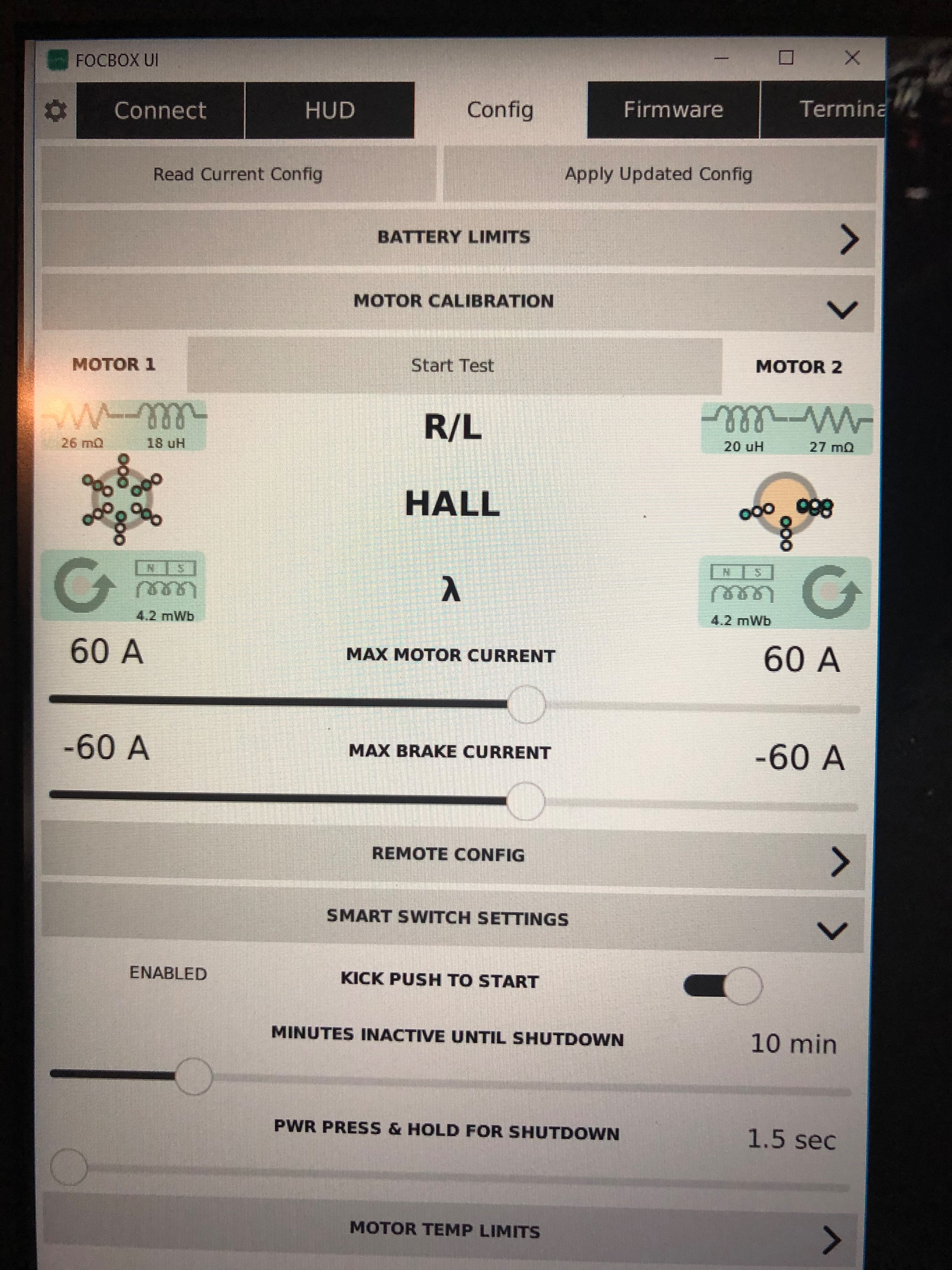 The unity turned up about a week ago, but I needed to wait for my replacement BMS (rage). Luckily this turned up the next day. I am a Mac user, so had to use my work laptop and everything went pretty smoothly. I’m having issues with the firefly telemetry, and I can’t connect over Bluetooth (which is actually really annoying).

I’ll make a new post in this thread on the firefly remote.

I had a great first ride today, and I’m totally happy with the way everything feels. The acceleration curve is very smooth (faulty hall sensor stutter excepted), and I’m not game enough to go top speed on such a small deck just yet.

I always thought it was the other way around.

Nah all the bad stories on here are from 6374s. I think there’s a few quietly happy flipsky 6354 owners on this forum. They seem to have a pretty good reputation on Facebook and reddit

I wanna know how you did the firefly

I’m not kidding about the UNIK mount being solid.

Today was supposed to be a test ride, but with all the family around for Christmas, the board got a bit of a workout. Towards the end I noticed the motor mount was a bit loose.

On closer inspection I was missing at least half of the screws/grubs/hardware on the mount, and what was left was really loose. 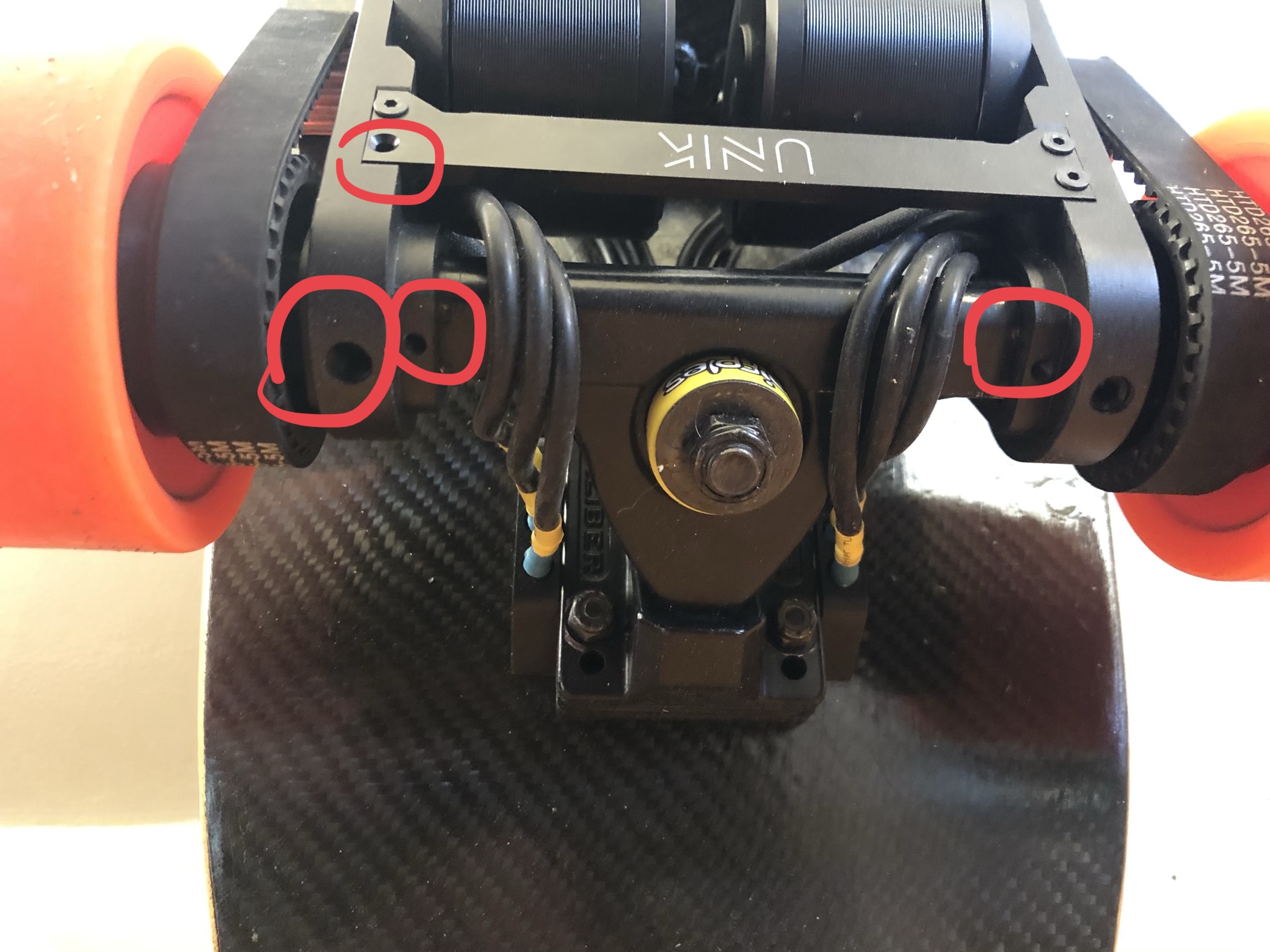 Didn’t really seem to affect performance at all. Now I gotta get some replacement hardware and apply the locktite…

This is really awesome!! 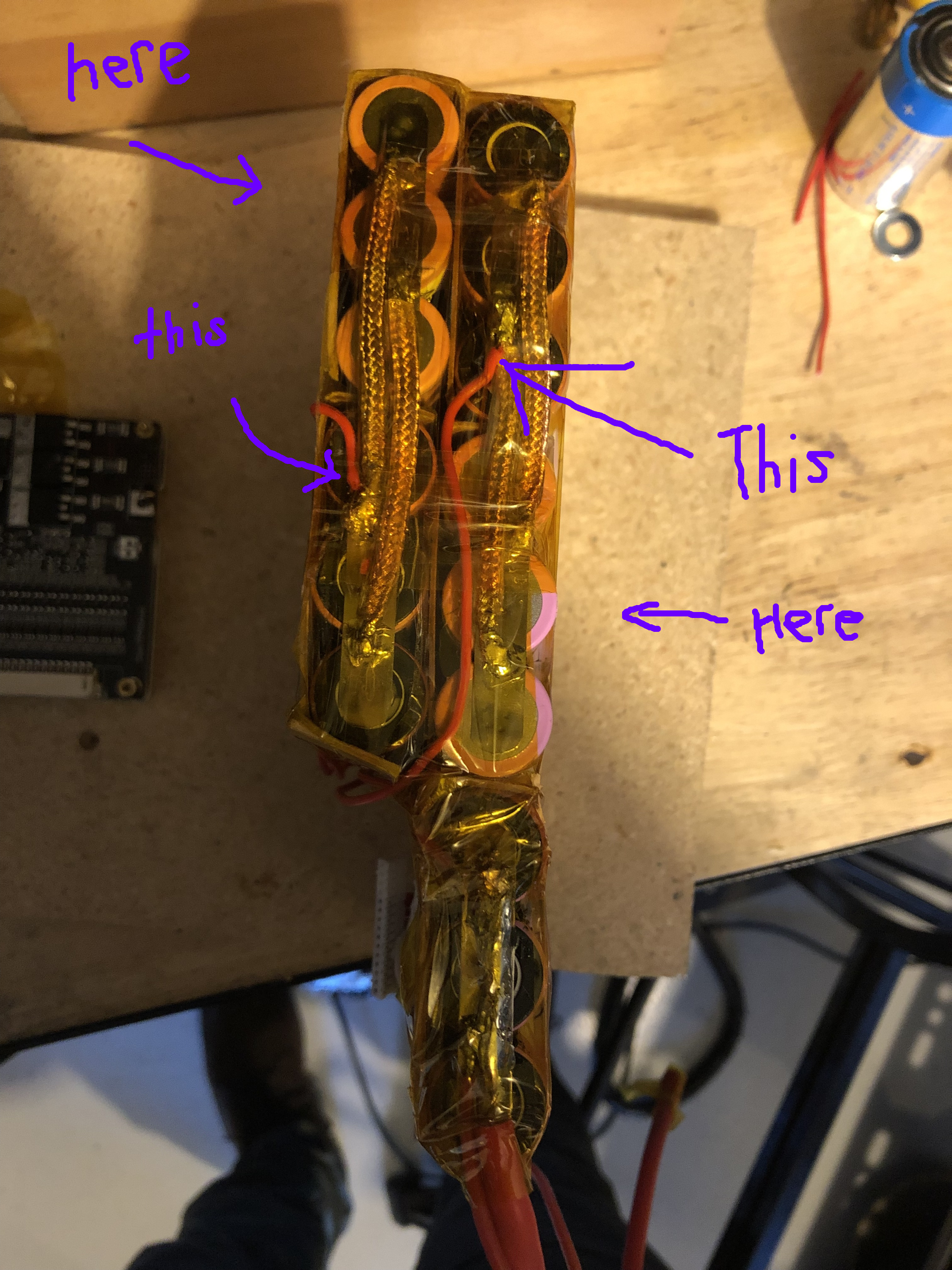 Love the remote, this board is a piece of art

hey, this is awesome! do u know how much this would cost to make?

Dude. I LOVE this build. As a firsty, this is one of the cleanest, most intentional looking builds I have seen yet. You nailed the mini carver build. Like defined it with this board. You should be hella proud. I would hire you to make me a board… Mad props my friend. Sweet as

do u know how much this would cost to make?

Okay so I finally updated my build budget… there might be some stuff missing. I did purposely leave off the remote stuff because I’m gonna cover it in another post, and I didn’t include the costs to build my spot welder. Though some remote and spot welder costs may be in sundry costs. EDIT: Shipping not included. Shipping on Unity was like 50AUD and I think shipping on each order from UNIK was 25€. Plus a bit from amazon (calibers)…

Love your build, looks super fun. Just wondering which timing circuit you used for the spotwelder. Was it the dual pulse ones or single pulse?

THIS IS DOPE! i wish i didn’t have a left over deck, vanguard, that i kinda need to use (i might sell it, but you can buy it off amazon). Im really inspired by this build, i might build something like it one day. tho i need to know a lot more, like enclosure making and battery making!

I got the timing circuit, welding pens, 9v AC transformer and foot switch from this store on aliexpress:

Other than those items, you only need a microwave oven transformer and some (really) heavy gauge wire.

any news on the firefly telemetry? i tried making one but broke it cause the wire at my school is not flexible and broke all the solder points

Nah man… I’m not super bothered about it and have other things to work on. Maybe in a week or so I’ll try and figure it out.

I don’t know how to write code so my plan was just to compare deodand’s commands.c code and the data types.h code in the Arduino vesc uart library and see if I can marry them up somehow?

But honestly I’m hoping someone smarter than me looks at it before I do and shares.

That sucks about your firefly build. The soldering is tricky for sure. I was having issues with mine, it kept not connecting and cutting out until it eventually froze on the firefly logo screen - turns out one of the wires to the nrf module had desoldered and was shorting on another.

same thing happened to me. at the start my soldering was putrid but then it got really good. i just need dif wire and i made the wires to long to start and messed everything up when shortening them!

Great fucking job. I hope this isn’t your last rig, because I can’t wait to see what else you do!

Thanks man! I have an old mate who let me know recently that he’s wanting to build a board. Hopefully he lets me get involved so we can build another SCREAM! board.