Just thought i’d through this out there since you always here of it going the other way.

File a dispute. That’s unacceptable if you’re not getting the still functional one returned.

Either way, you should have BOTH of them returned to you without question. For all you know the buyer could just be lying

Has paypal automatically issued a refund to the buyer? I am not up on how it all works.
I have only had to do a paypal dispute once and the seller never replied so I got my partial refund after the 10 or so days it waits.

That sucks then, but at least its not a lost case and you can still dispute it and provide your side.

This is the reason I feel paypal is a double edge sword. As a buyer I like the comfort the protection provides but if I sell something I feel uneasy knowing that if the other person wants to try pull a fast one then it’s going to be a lot of hassle trying to get it sorted.

I think it’s important to discern if the transaction was with an individual or a business, too.

Speaking as one of our forum’s active buyers, I would never use PayPal to claw back on second-hand goods for component failure.

This specific scenario has happened to me, literally, on every pre-owned esk8 I’ve bought right here on our own forum (ESC failure after they heat up).

YMMV, but I’m used to home-brews doing stuff like this after being shipped, so I didn’t even bring it up with my sellers - much less call the keystone cops at PayPal.

Merchants (presumably) understand the pros and cons of accepting PayPal and factor these into final markup, pricing and return policies. Have at them haha.

If it were me, I would call them out. Especially if they never sent an email or anything before filing the dispute.

Luckily I have a good record with PayPal and have had them side with me on two occasions.

@Scoo_B_SK8 the focbox I bought from you still works great! Sorry other people are dicks

i actually had know idea until went to “escalate” mode, the ONE notice they did send about it i found in junk mailbox.

just yesterday involved myself in a discussion here on “crypto” currency. was dishing out negative about it but now honestly i feel which ever method of payment a person feels most comfortably with is the one they should use and do due diligence researching buyer/seller protections and forget what others say.

Just sucks that this is what/who(paypal) i had “settled” with.

I’ll probably be going with full blown merchant services instead of paypal in the future.

@topcloud The purchase came from my website/biz from a person i belive not to be on this site. (Also trying to keep it anonymous as i can).

well focbox are not plug and play, and if they worked for 10 miles i guess he fked up the settings…hope you get your money

pretty much exactly what i said… 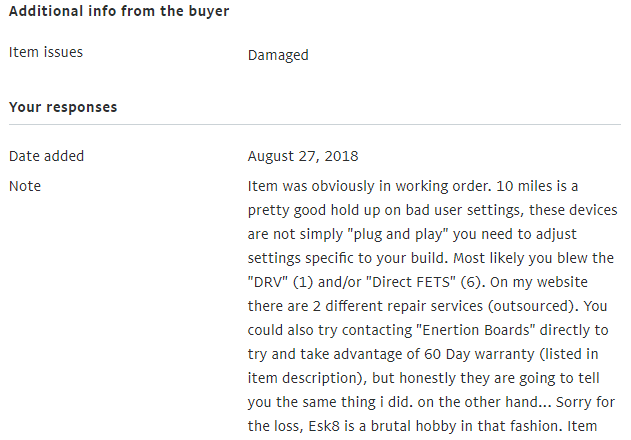 i did not mention can buy a platinum warranty from enertion and get a focbox replacement at 50% off cause i was under the impression it had to be purchased during focbox purchase until today when i spoke with them.

…and this whole dilemma is why enertion does not accept PayPal.

Yeah PayPal is a bitch, I sold a board here in parts (I really didn’t want to) PayPal stole all my money since one guy made a claim (And won with false claims) and they froze the rest.

The account is now banned, and 600 euro is lost.

Just nothing else like PayPal but better, and used by everyone.