Hi, I hope I dont get roasted here as some people dislike new and new picture threads.

Anyways I came up with idea it might give that necessary ‘behind the scenes’ look in what it is like to build an esk8.

I know some photos are already in picture thread but I want to encourage to post some more of the “raw” stuff, things people wouldnt always open heartedly post on the wall for everyone to see, so to speak…

Anyways, can share a few of mine from a few previous times… I dont really have a nice workshop at which to work at and building / improving most of times have to happen on floor and in rather chaotic manner (as u will see)

Attaching motor plate back and putting on the wheels. 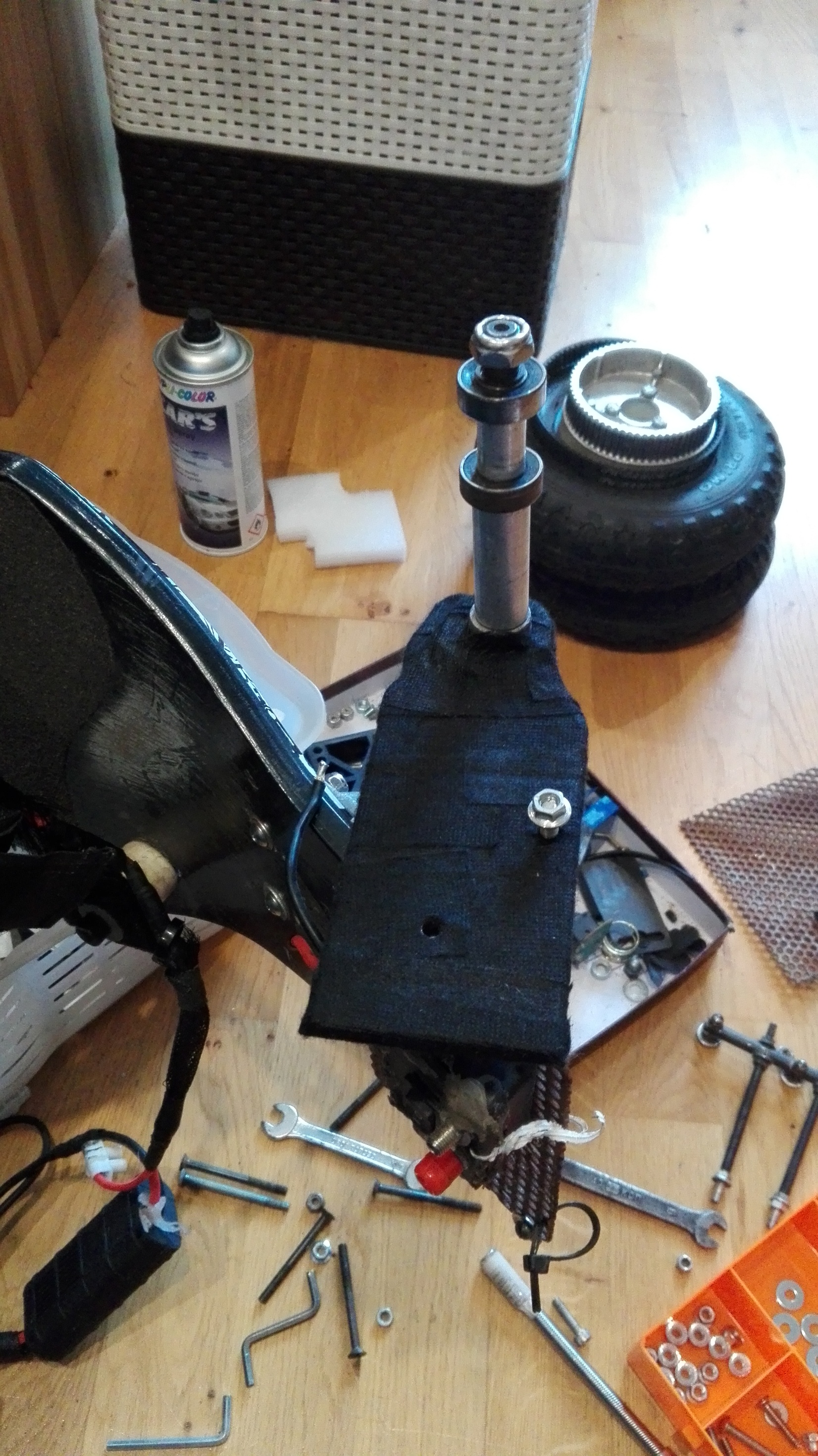 Soldering wires and doing other construcion 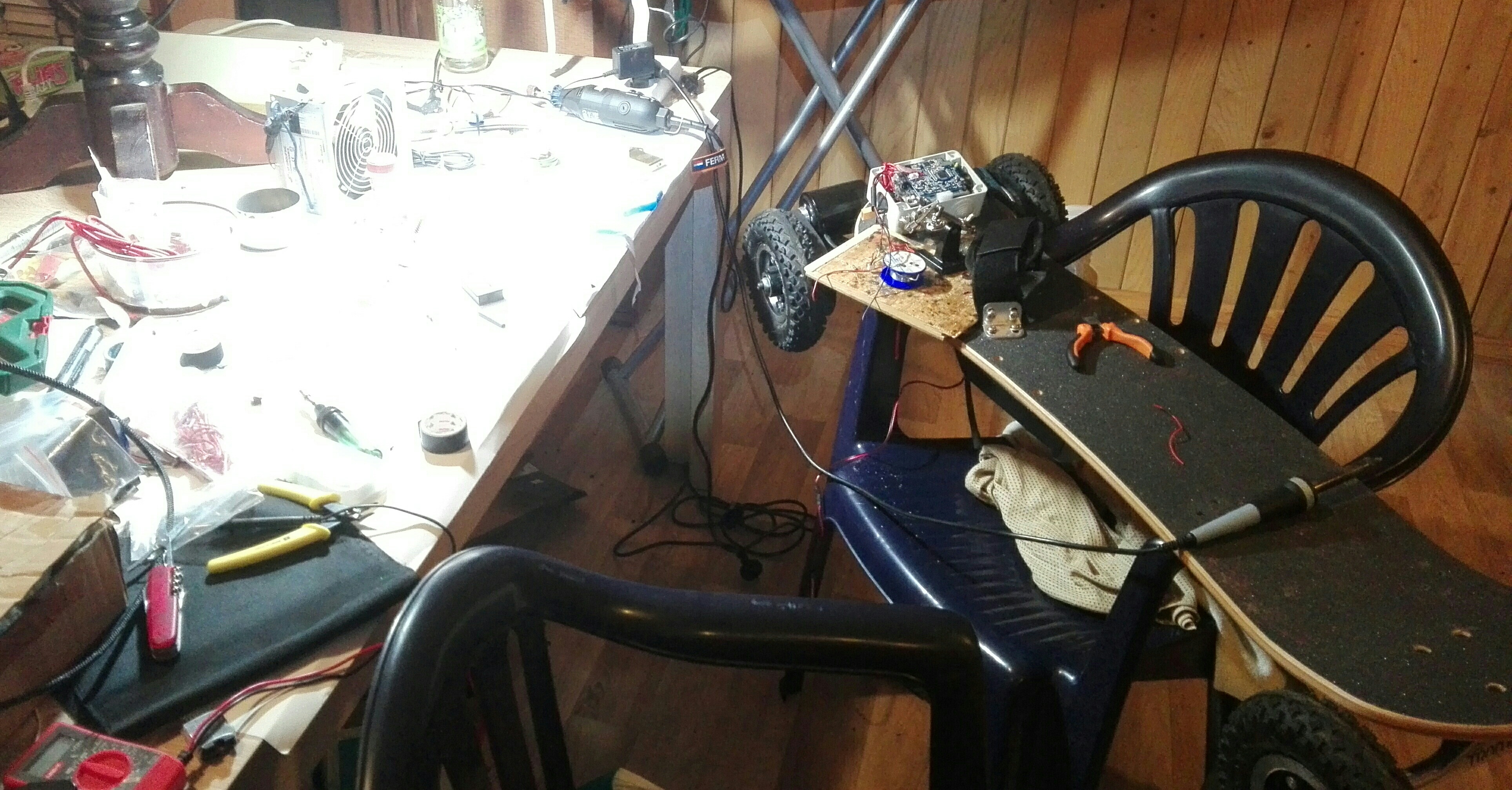 Trying to figure out battery layout 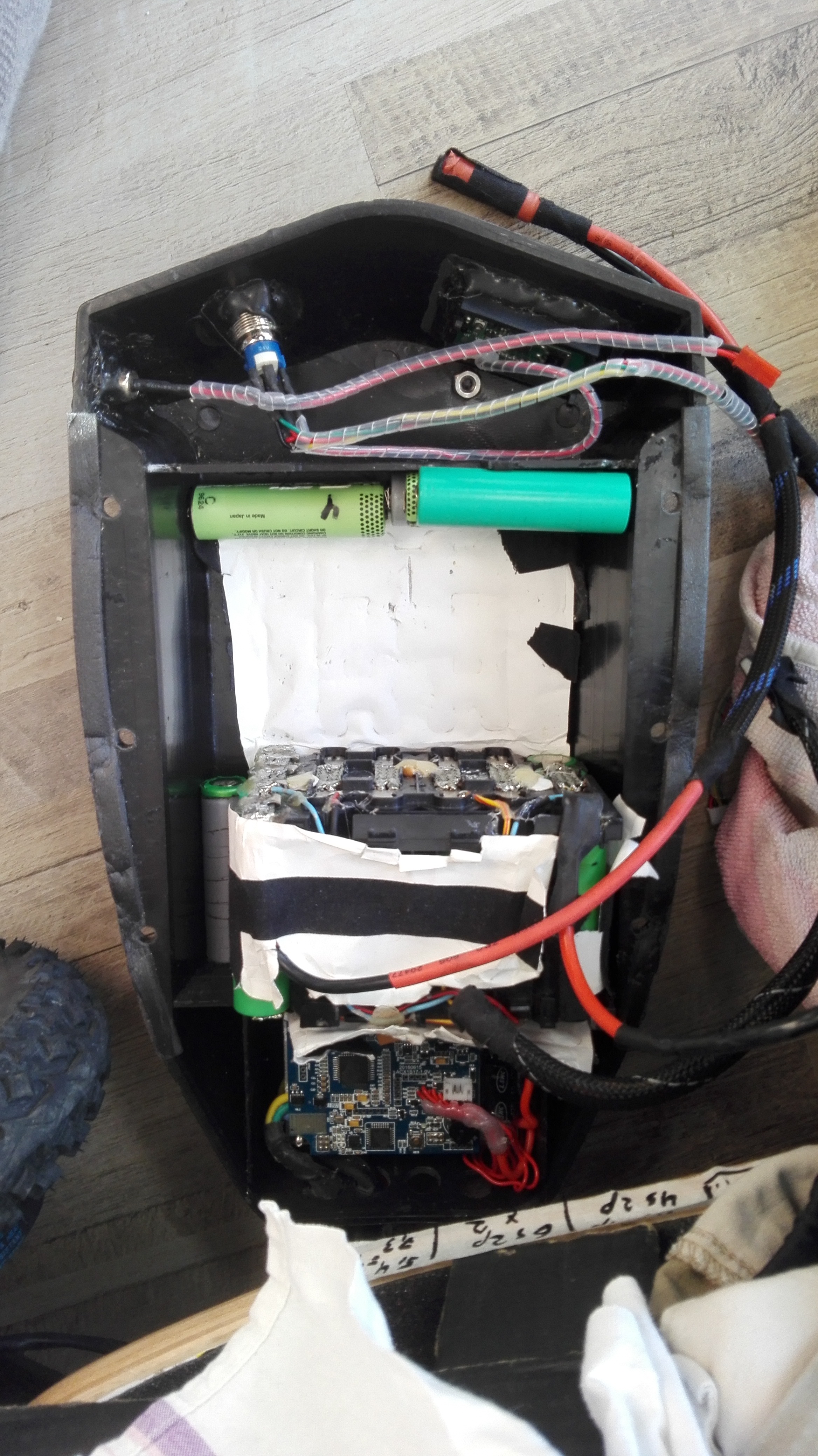 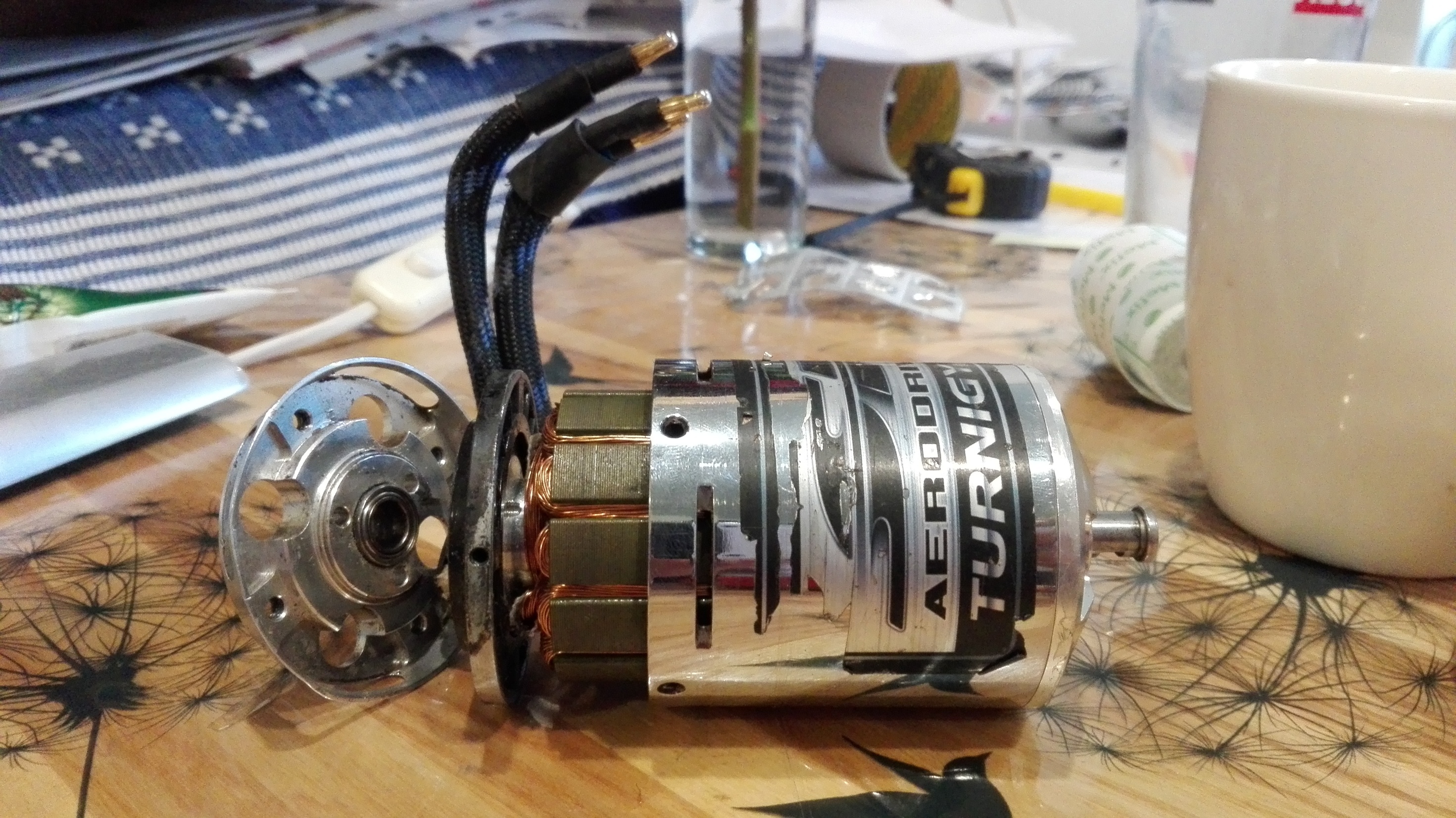 Whoa that looks like a children’s play house for men

My work space is the dining room table when I get home from work at 5am for a few hours. Other wise it’s my lap. Lol

Its a combo, i am set up right next to my boys’ fort 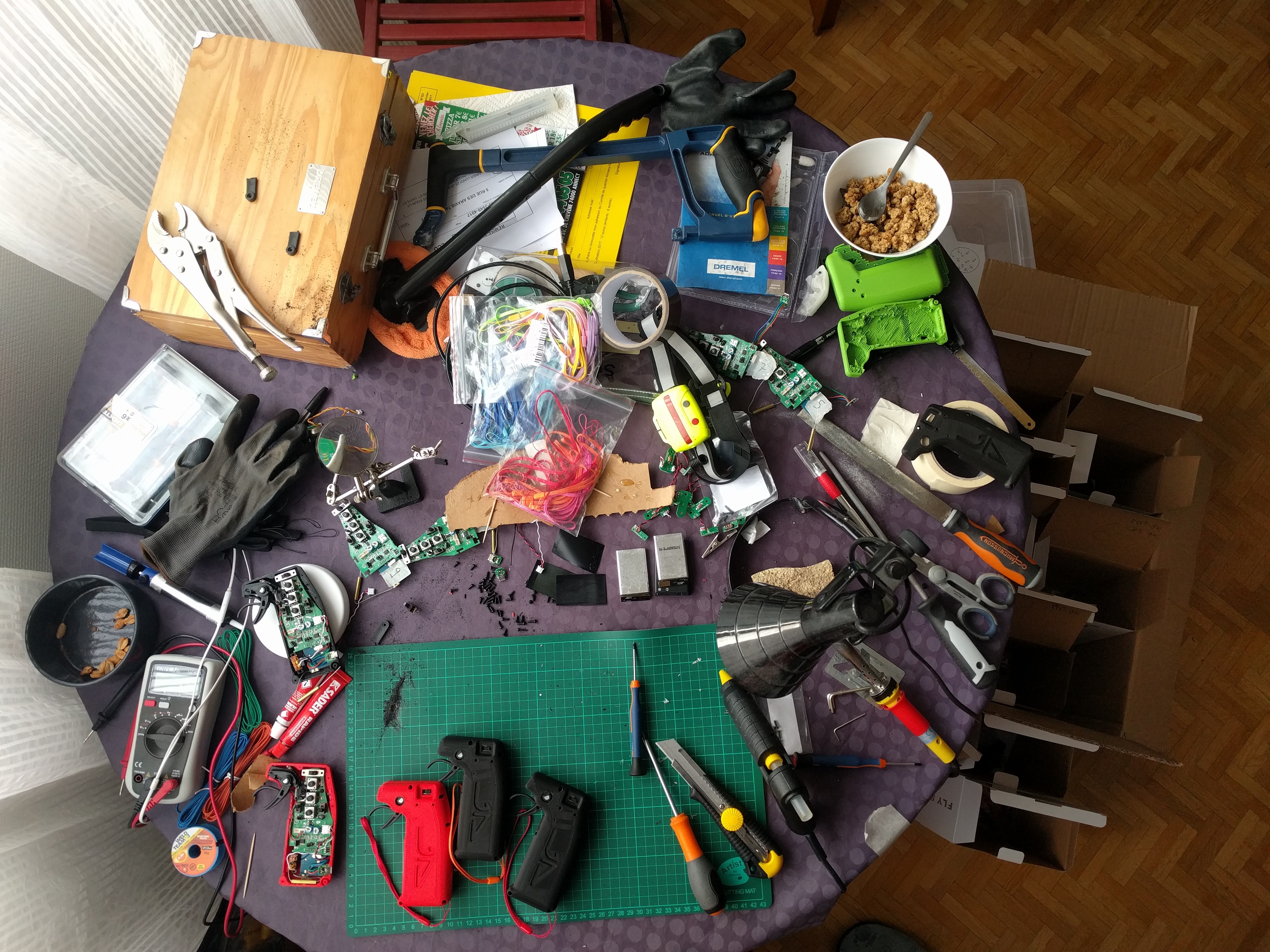 I have VERY kind flatmates for bearing my mess in the whole flat !

@Sender ah I wish I had that much table space available… really lets to expand your space and not to feel crammed in one tiny spot!

recently moved all my stuff from my garage to my bedroom…my desk hasn’t been as ‘tidy’ as the pic ever since but i regret nothing.

I love this thread! Seeing other messy workshops makes me feel so much better about my own

Buuuuuuut I cleaned mine up today. Plus added a better lamp and a crooked shelf 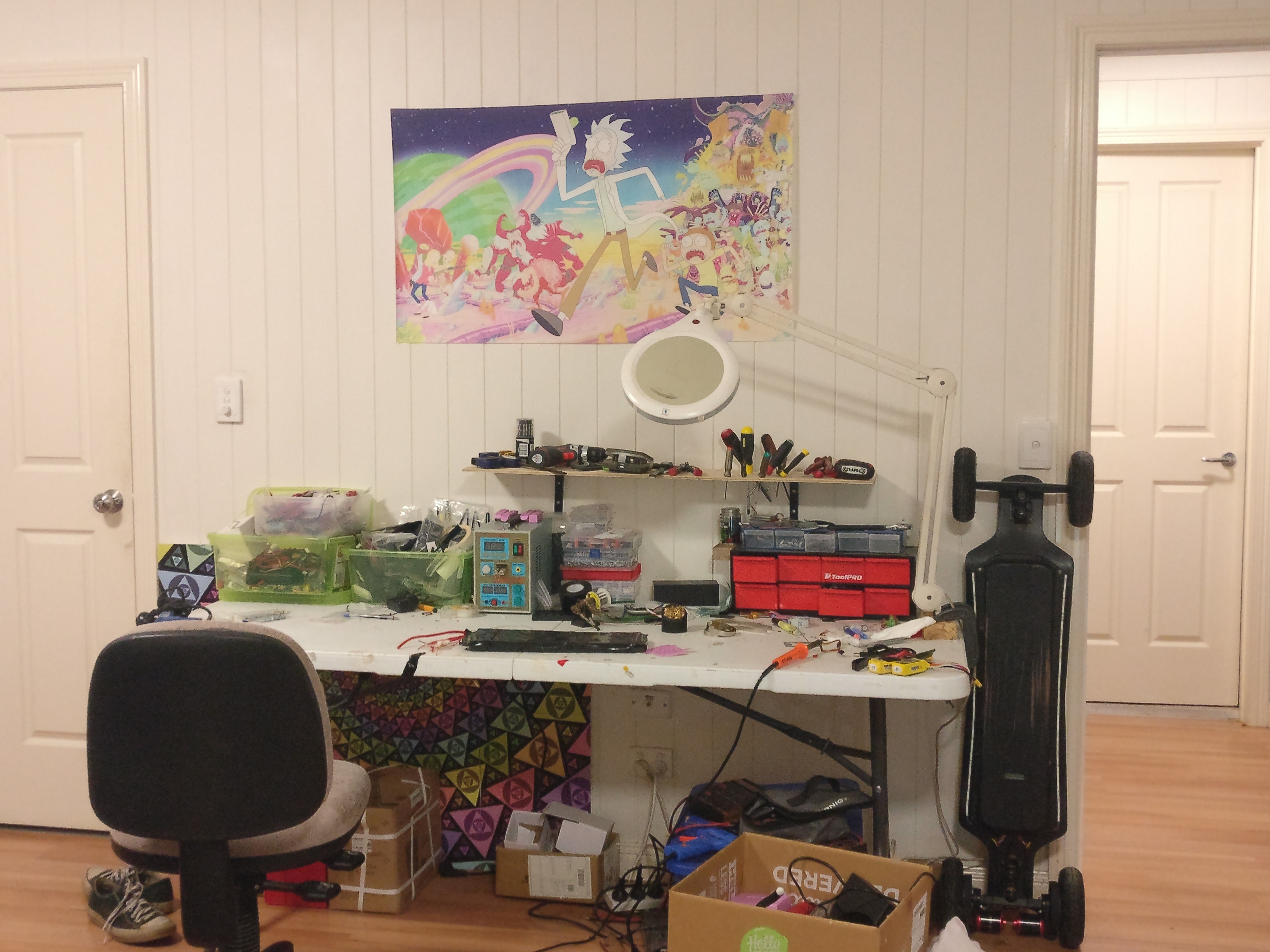 @TinnieSinker hah I definately love your poster on the wall! the one under desk also looks like some sort of lsd trip hah

On a side note (probably should comment esk8 parts, right?)… the workplace does look really tidy, like the one before anything starts to happen for real

@abenny Lots of ‘info’ in your workplace pic… Curious about that 2nd board u have on left side, looks like u have ‘modded’ the diy eboard enclosure quite a bit… can see percentage meter installed but cant make out other details about it…

Also love the beefy motor on the blue wheeled board which is on table… the only other thing i can comment is that I feel bad u might have the 50W charger… Though I guess if you are not in a hurry, dont have to charge quick and dont have huge 300-400wh battery it is doing just fine

Maybe some will love some of these… 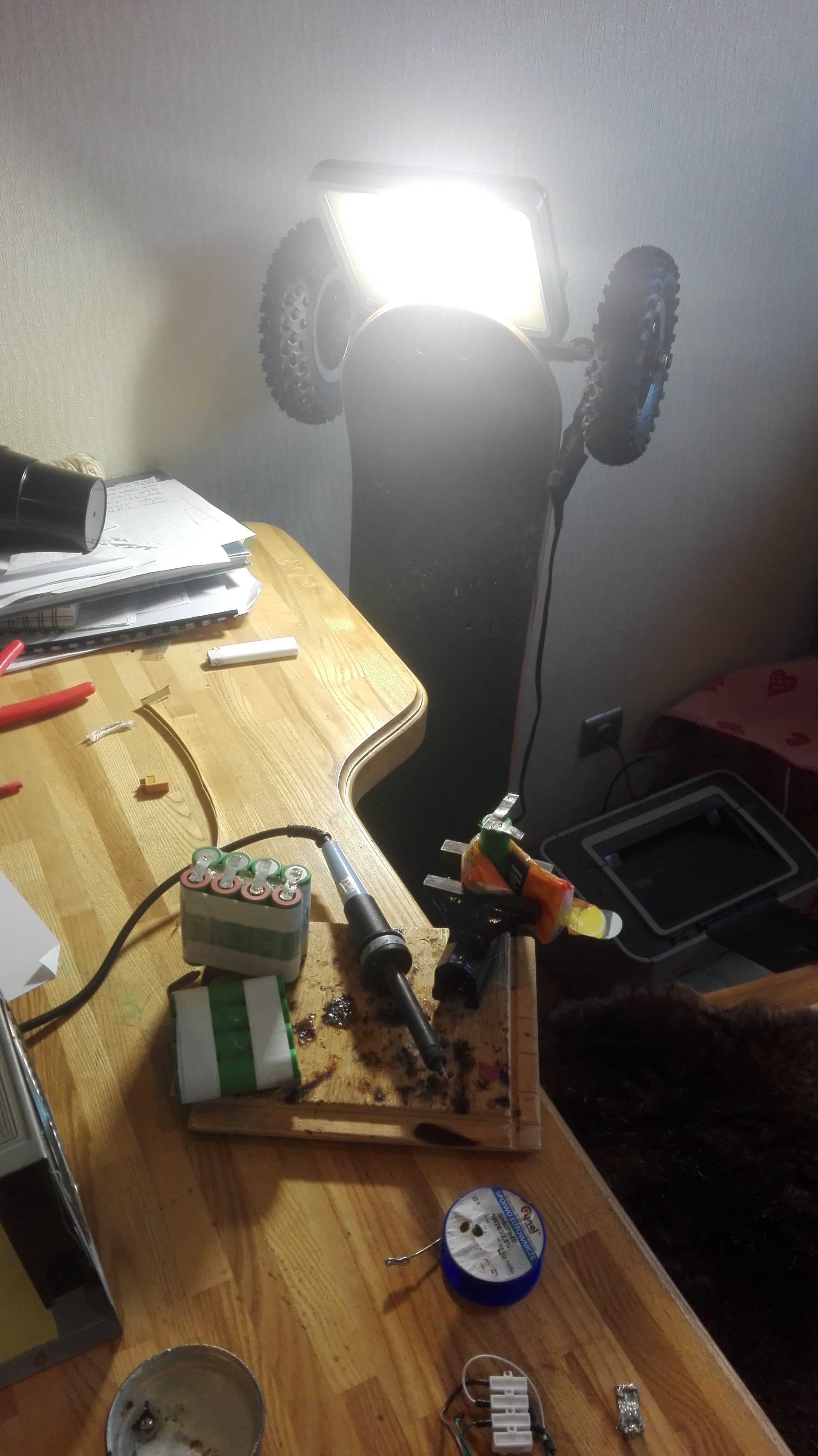 With welder in background 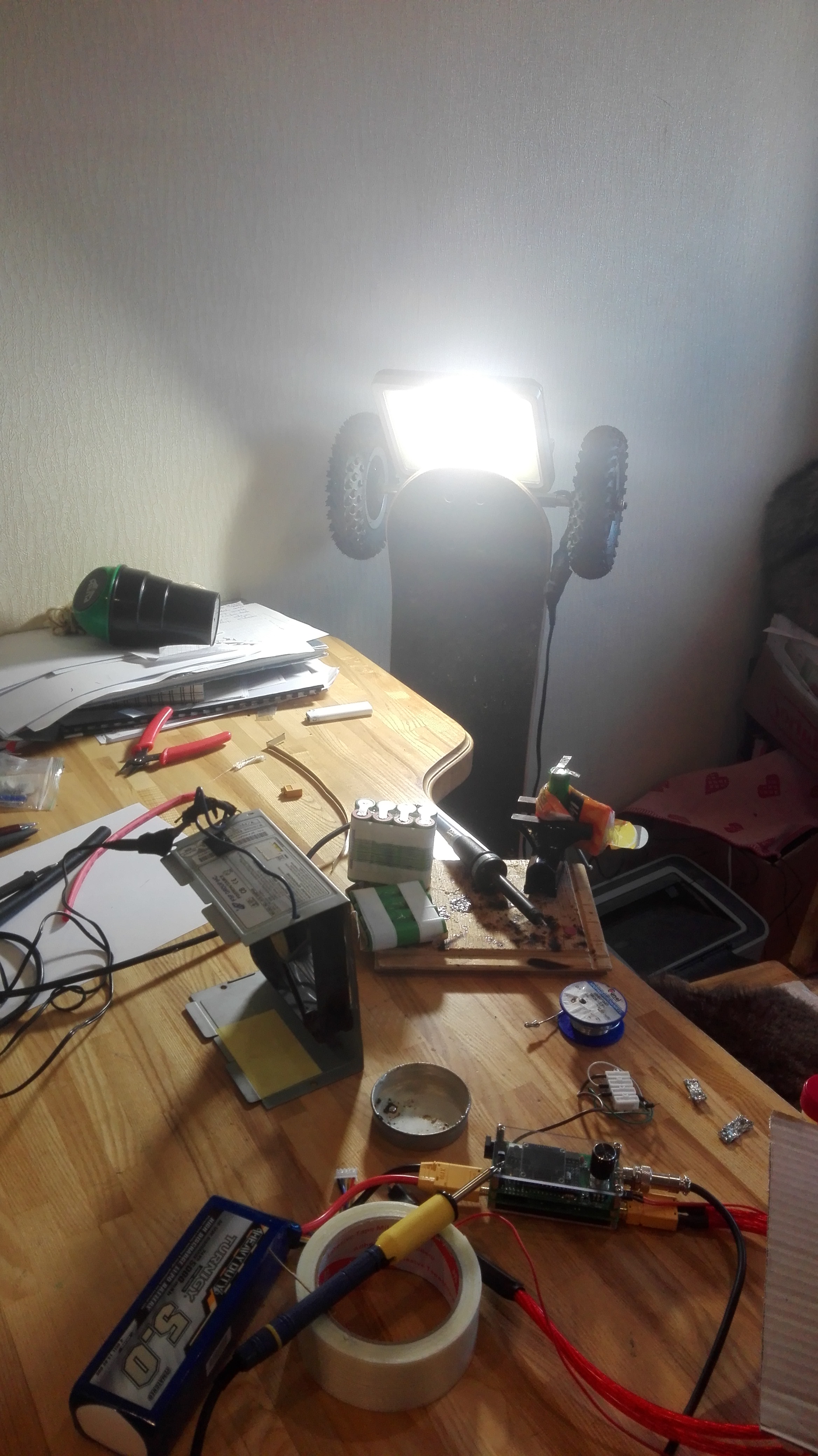 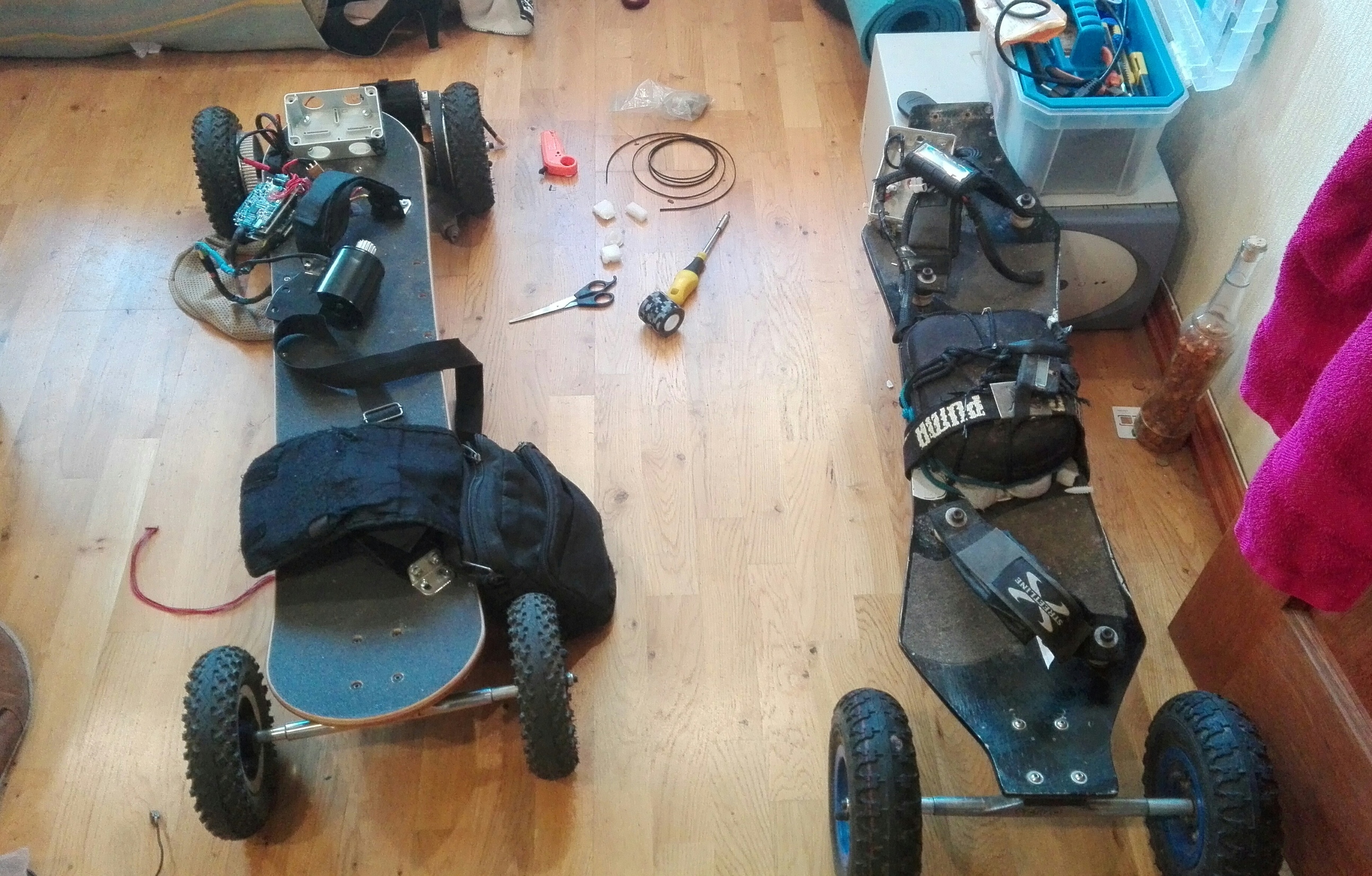 the 2nd board on the side is actually my main board…it was out of commission waiting for new motors. i got one of those diyeboard enclosures on ebay for like 15 bucks last year, added an inline watt/volt meter and a battery % indicator. this board is now back up and running as my main board with dual 190kv 6374. i dont have any pics of its right now but i have this pic of the drivetrains and messy background of my work area…

also the 50w charger gets the job done for the side build (blue wheels) which has no bms, but my main dual drive has a bms (also 8s batteries) and a 6amp charger (muuuuuuch faster than the 50w 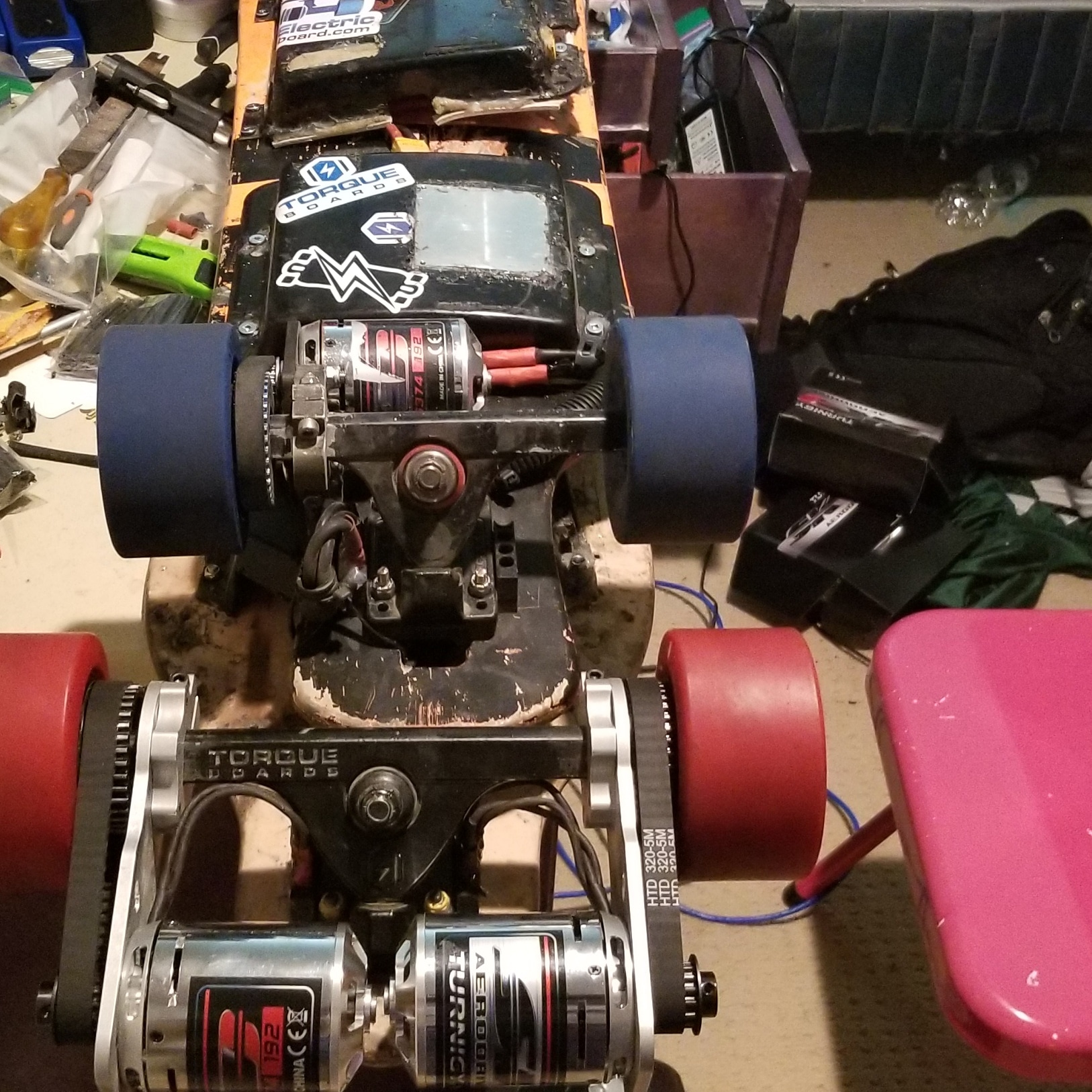 lool that board makes a very expensive lamp

@abenny Thanks for all the side info! Appreciate it!

Yeh I cant get my head around how I could get a 80W charger when I started out… I first fell for the ‘10A’ rating on it lol… only later found out what 80W of charge power actually mean when you got 250+ Wh battery to charge… (plus I had / still have 72W supply, so actual charging was / is only 60-65W or so…).

I guess Im a fan of quick charging as these long 3+ hour charges is a fun killer… especially if u wanna grab a board and go longer distance in short amount of time.

And have set a ‘standard’ for myself to have at least 150W capable charger to be able to charge decent amount of energy in short amount of time.

Might write a pm at some point in time to you, as I was also interested in what data / power figures you might get out of your ‘dual motor beast’… curious how it performs on street wheels, so to speak… I imagine power is quite immense on it

.i dont have any bluetooth apps for telemetry or anything so the only formal data i get is what my volt/watt meter reads at the end of my ride…it has information like peak amp draw,minimum voltage, peak watt draw, etc…i know i peak around 50amps on the 190kv dual 6374 motors and peaked at 60amps (limit of my bms, so it would probably go higher) on dual 260kv 6355 motors, but other numbers id have to look at after a ride to let you know… as for power…it is definitely a lot (even at only 8s)…never had issues getting up hills or starting from a stand still (though i tend to kick start). top speed is ~42km/h at a full charge at ~39 nearing empty…i can also accelerate to full speed up any hill in my area (probably 20-25% grade)… 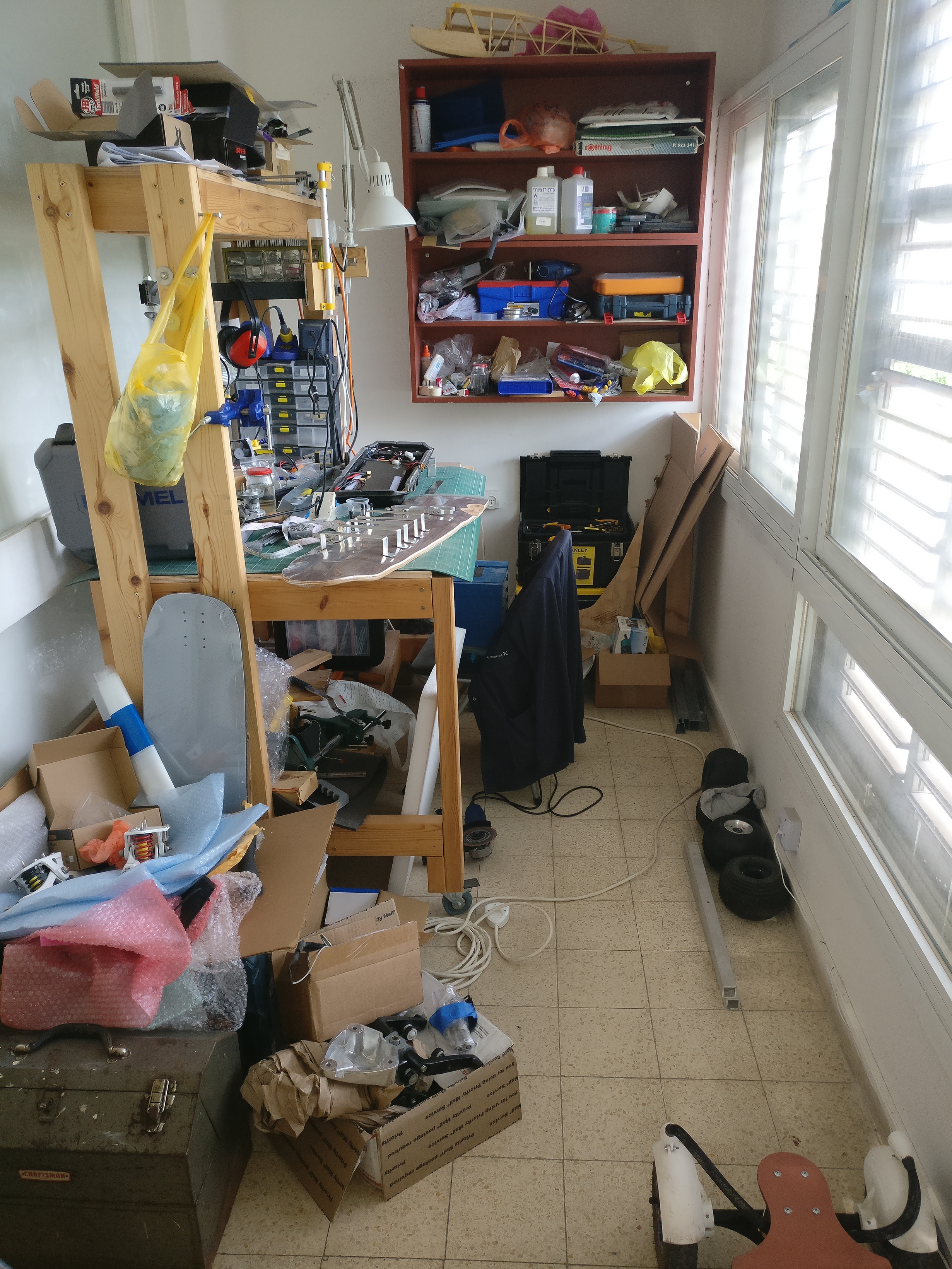 Well, here’s mine. On a messiness scale of “I know where everything is” to “just used an angle grinder on wood and metal” I’d say this is about a seven. My current board is in the middle of a full overhaul, to the point of being a whole new build. If you look closely, there are some hints to what my next build after that will be.

Yes, cornflakes were for breakfast. But did you notice the rest of the dinner on the table ?

That was a old picture, now I managed to build a permanent mess-space in my bedroom. Less space = more organization ! 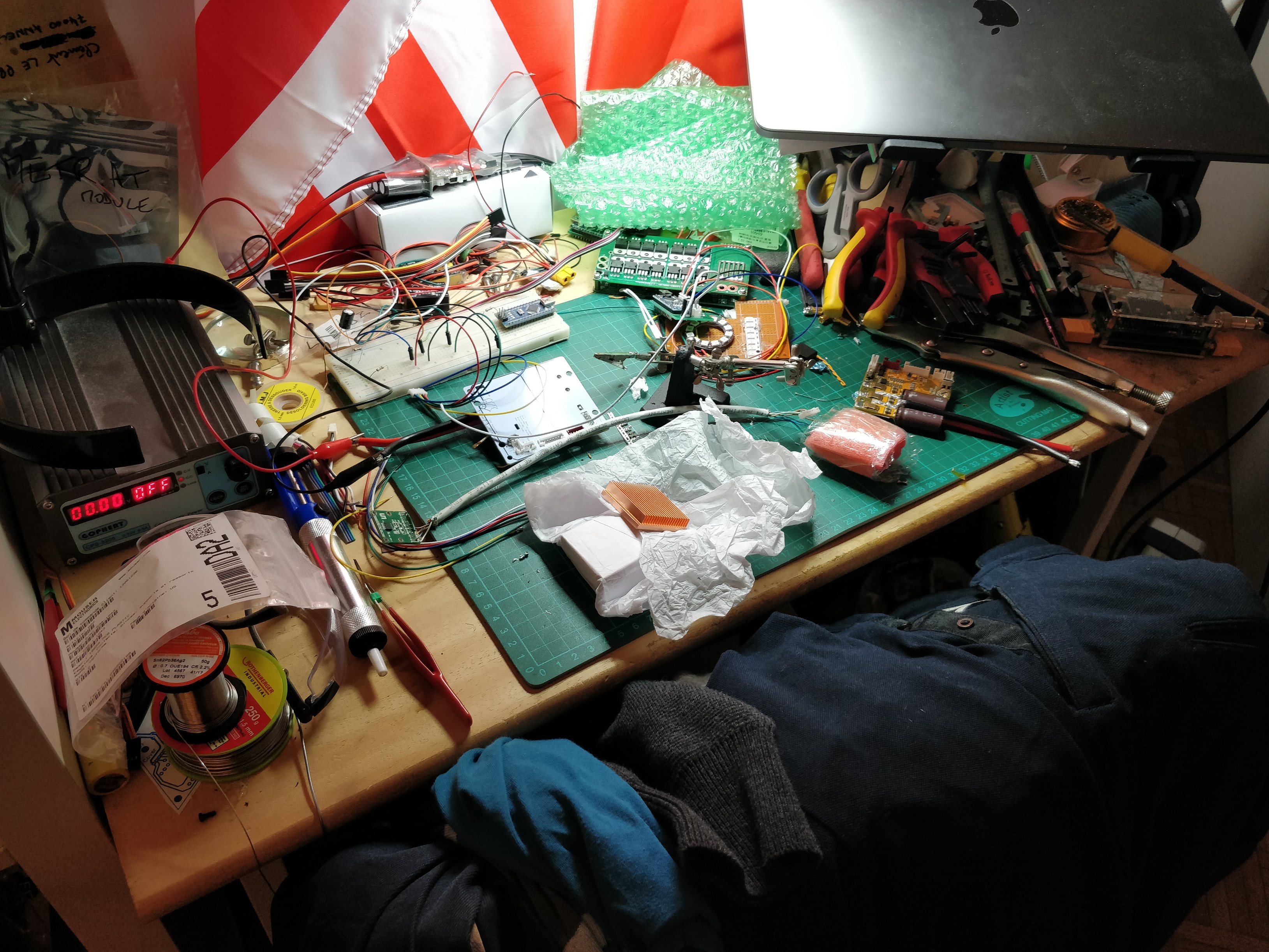 (Don’t get it wrong, this is malaisian flag ahah 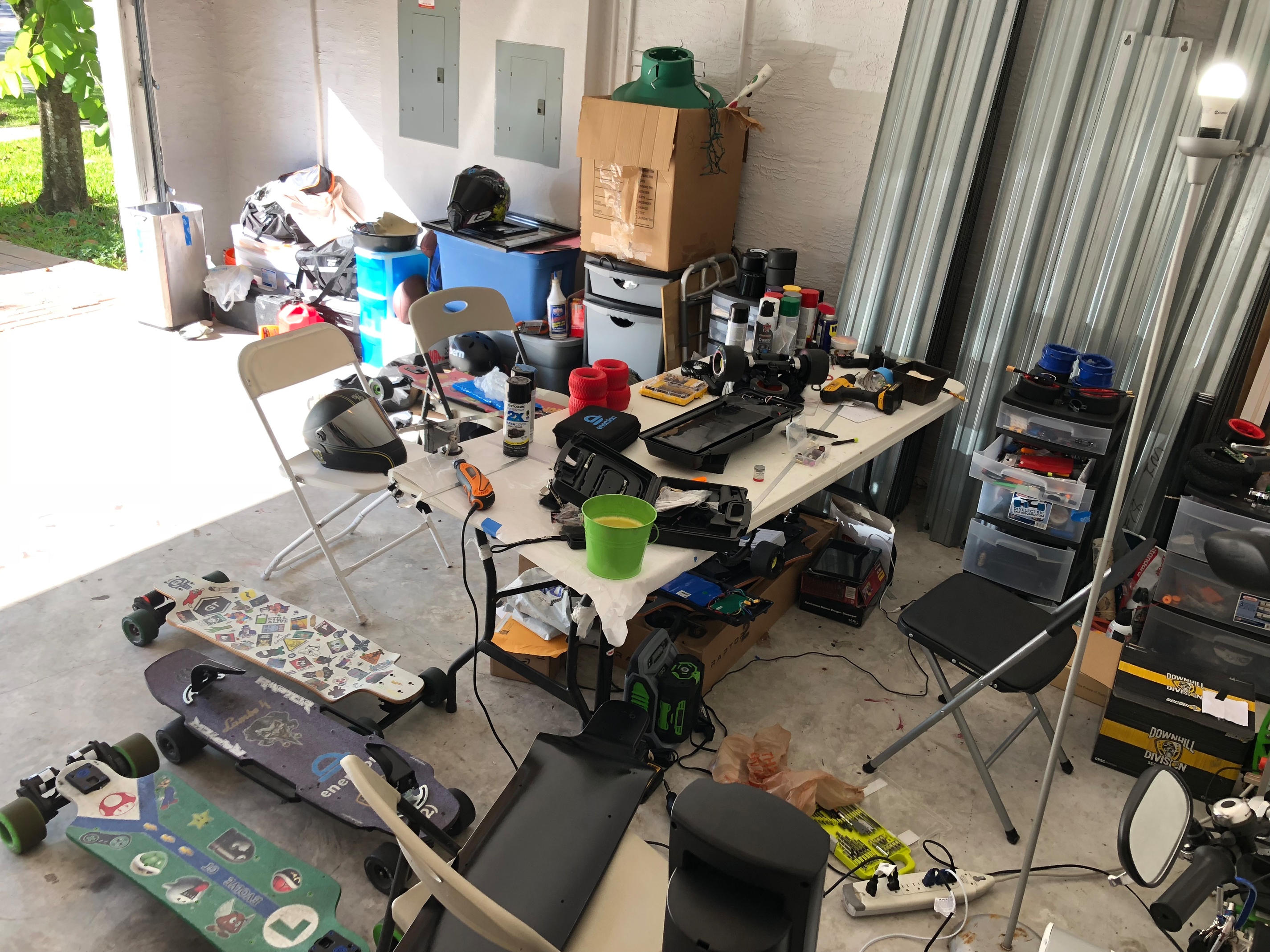 @Rod12579 btw wanted to comment on your profile logo! Did you made it yourself? Looks like a really nice logo… I wish there were such stickers to order and stick onto the board hah!

As about your boards - I saw youve got quite good looking ones shown in some other topics. Did you make the custom griptape all by yourself or u ordered it somewhere?

i got a bms for my second board! no more 50w charger…just use that thing for storage discharge now

Found one more of mine from previous times. 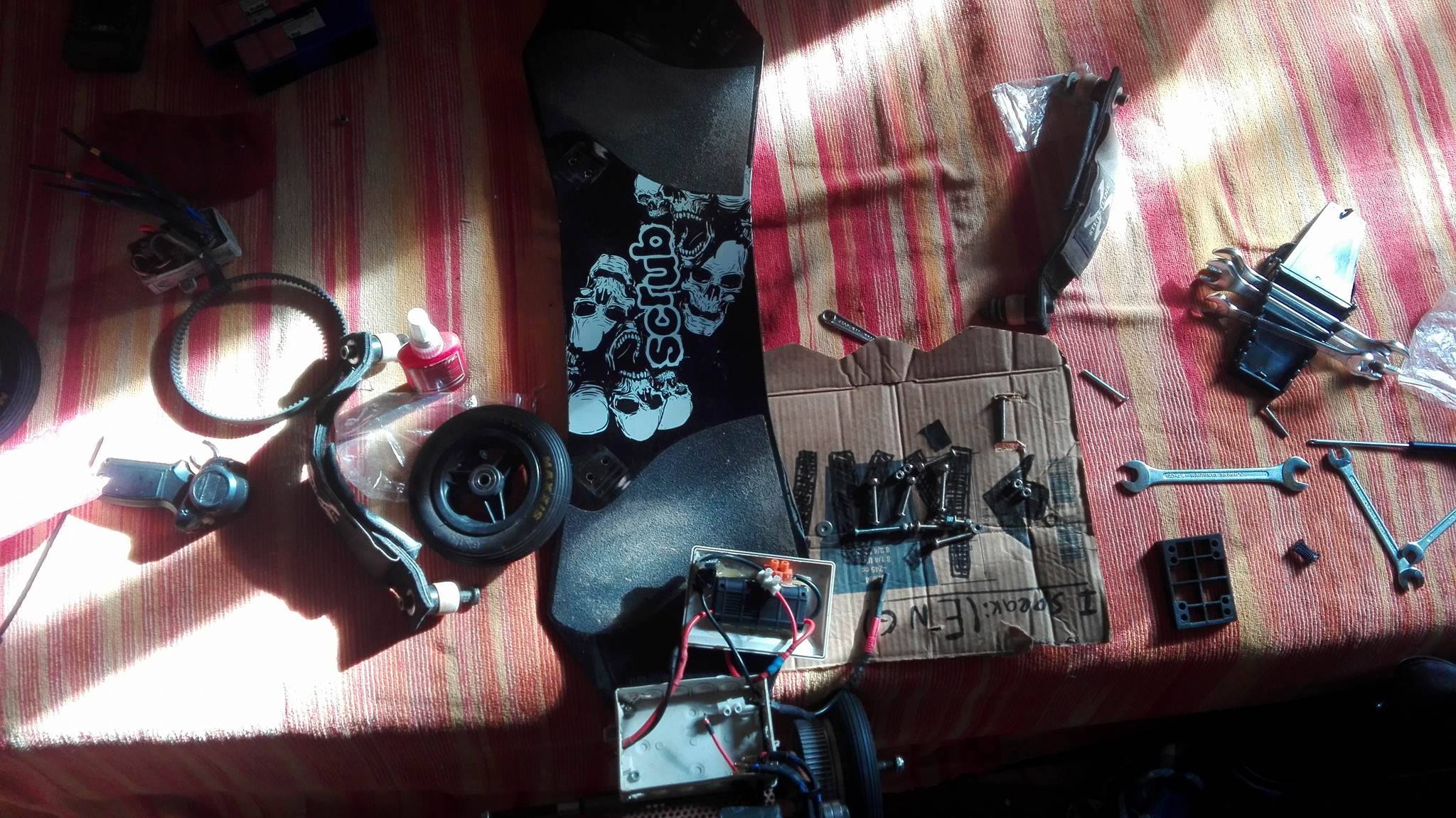