my e-longboard died and I decided to build one by myself. So, went with the following spec:

rest of the set is not worth to mention. However, I faced a problem with the engine (or VESC). When it runs without a load, looks that everything is fine, while when I’m standing on the board and try to start, the engine is breaking in a weird way. Here you can see an example: https://vimeo.com/275506146

Also, I’ve noticed the board’s acceleration is far away from the previous spec. Do you have any ideas what is wrong?

I have this motor [https://hobbyking.com/en_us/turnigy-aerodrive-sk3-6364-245kv-brushless-outrunner-motor.html?wrh_pdp=7](http://Turnigy Areodrive SK3) so specs is as follows:

To setup my vesc, I tried with values equal or higher than above:

I’d suggest turning those down. Start with 60a motor max and 40a battery max.

Let’s see some pictures of the VESC too

Ok, thanks, will give you feedback asap

So I changed settings according to your suggestions but before I go for a test ride, I would like to ask you to take a look at my VESC settings. 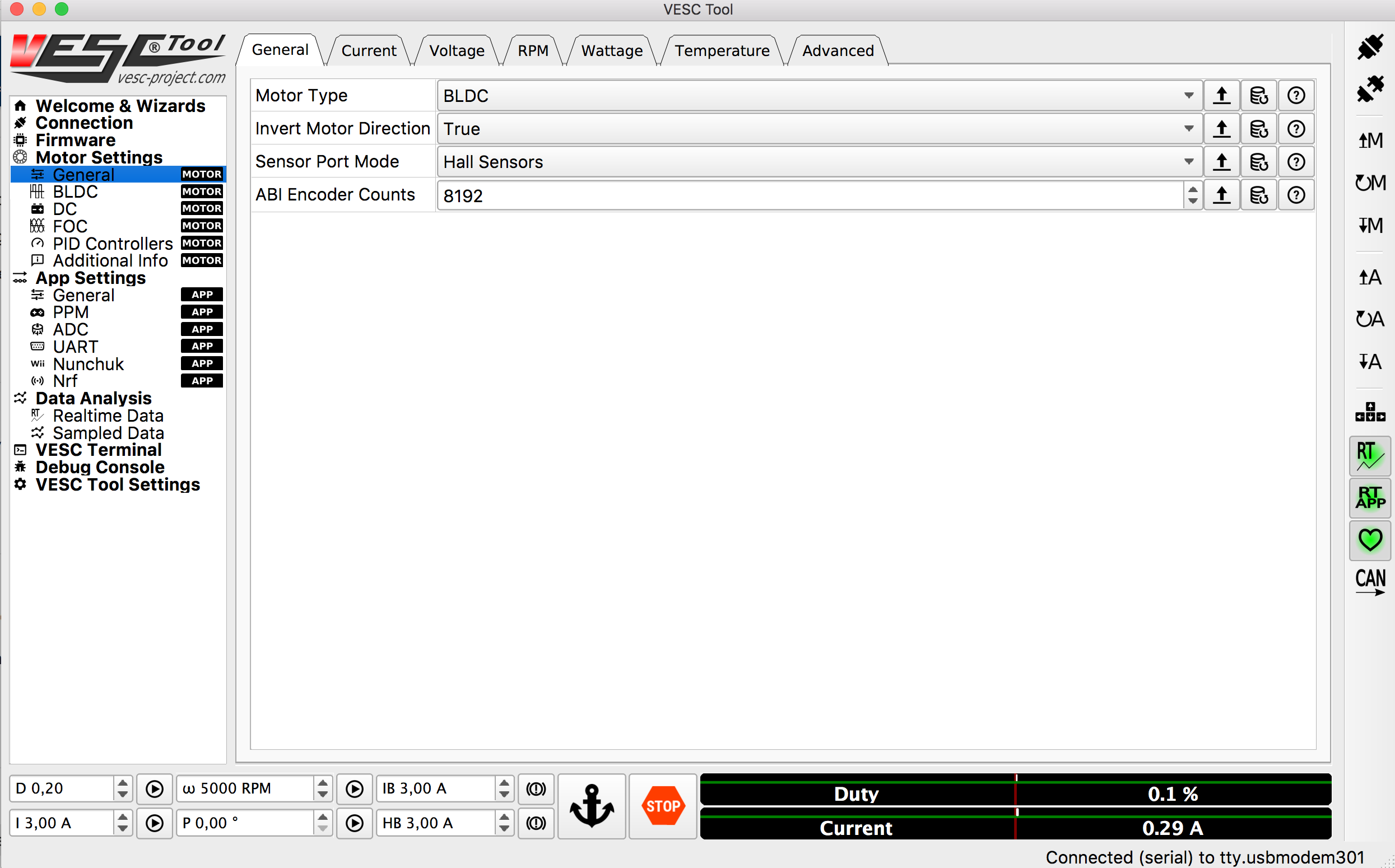 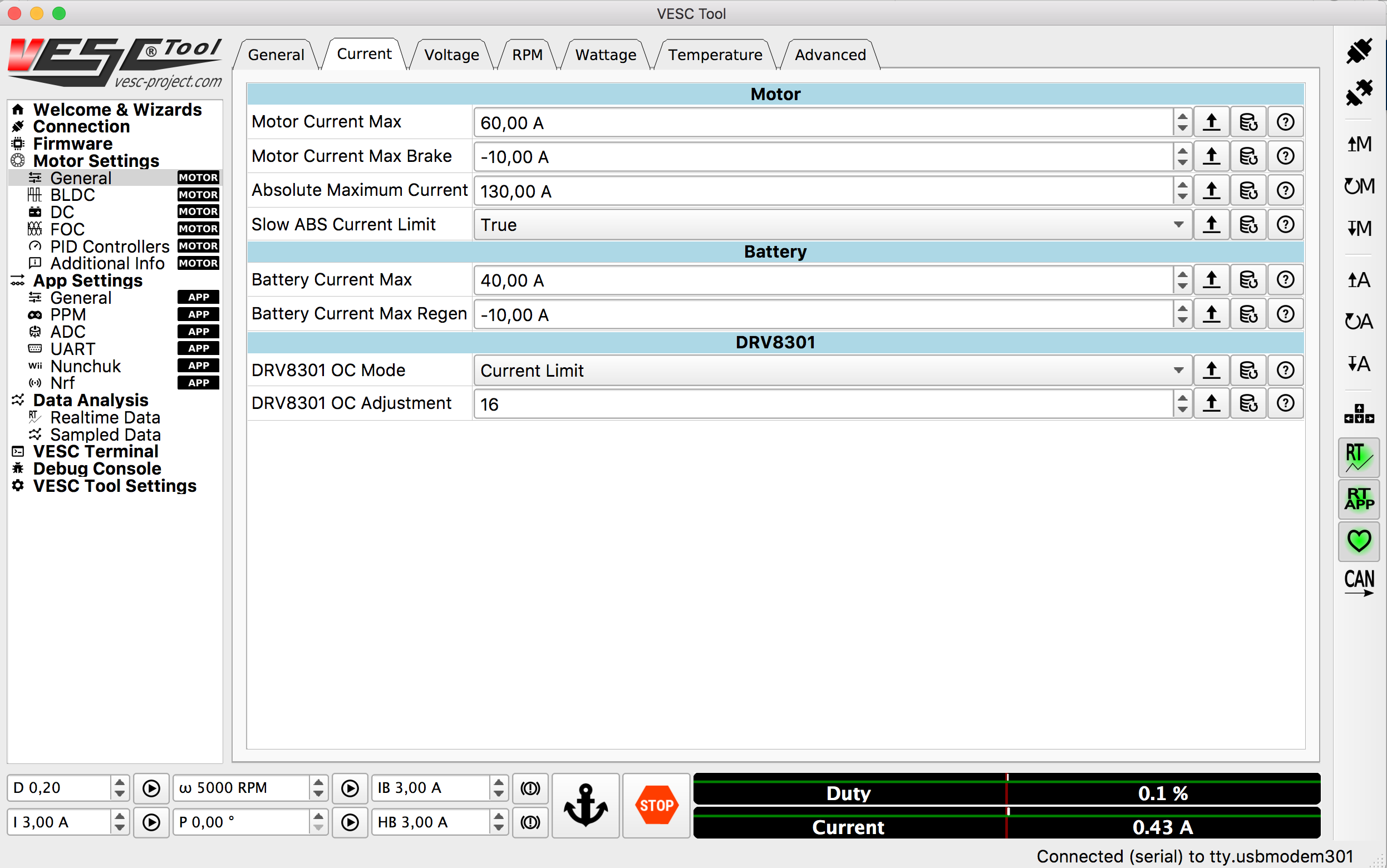 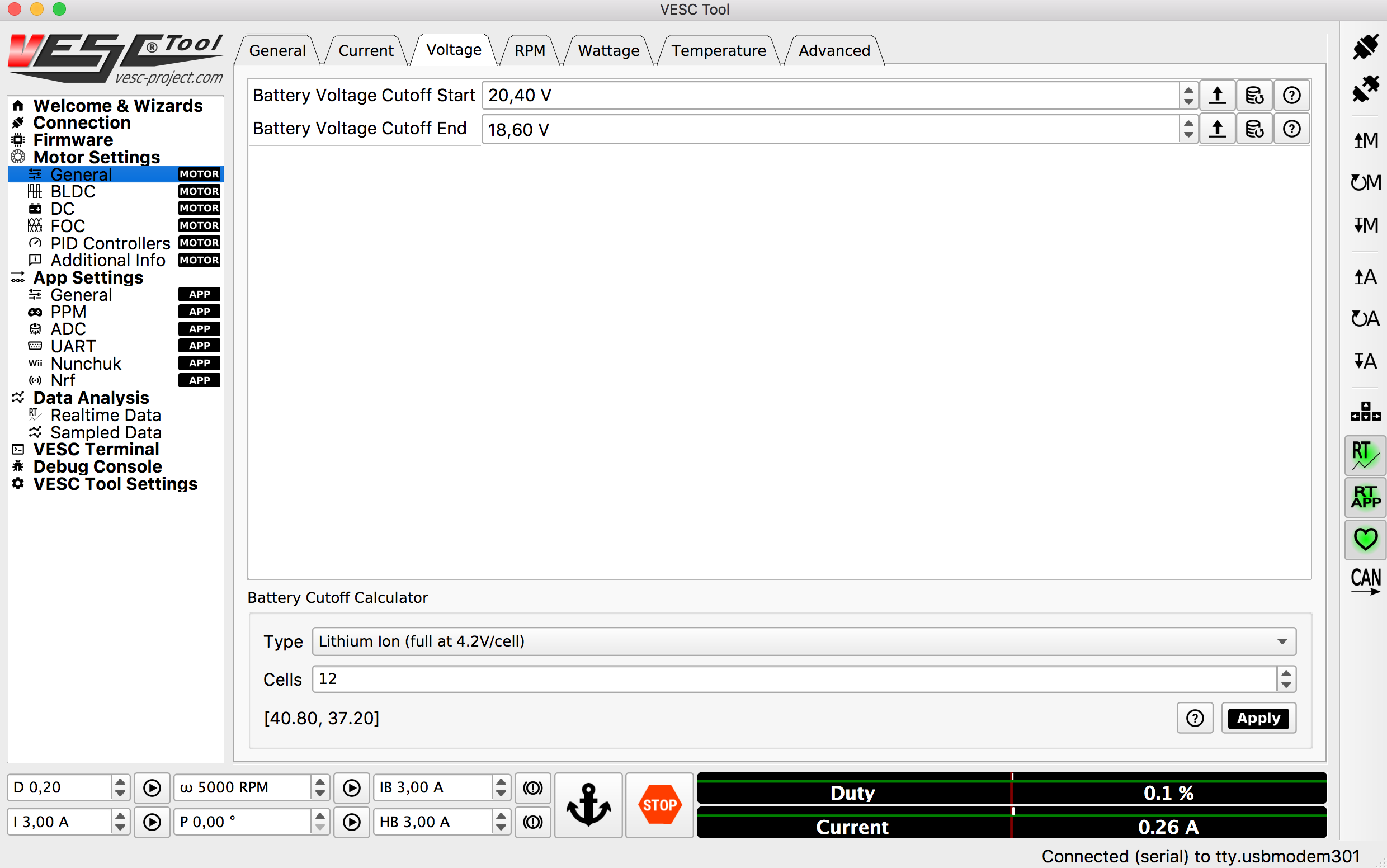 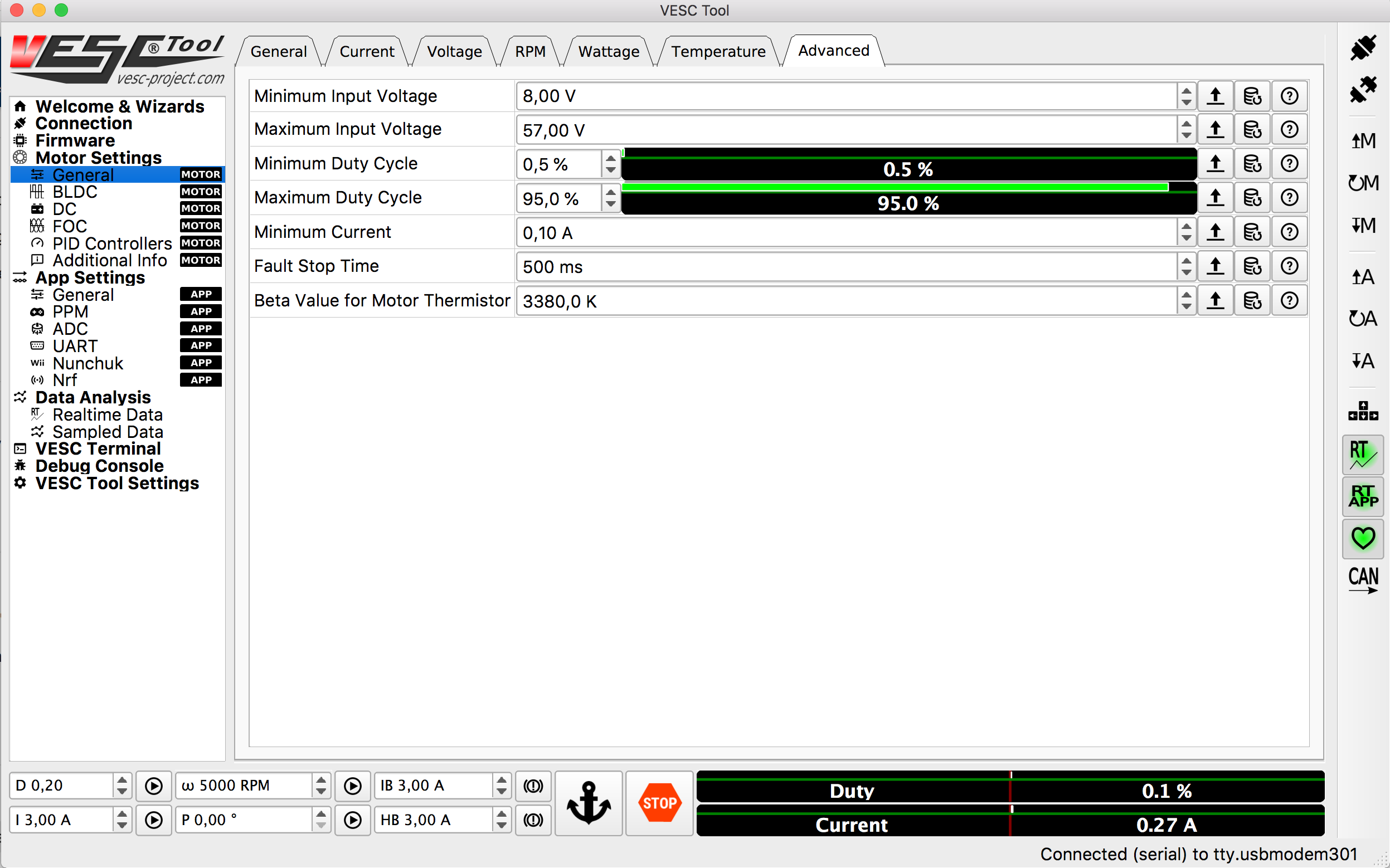 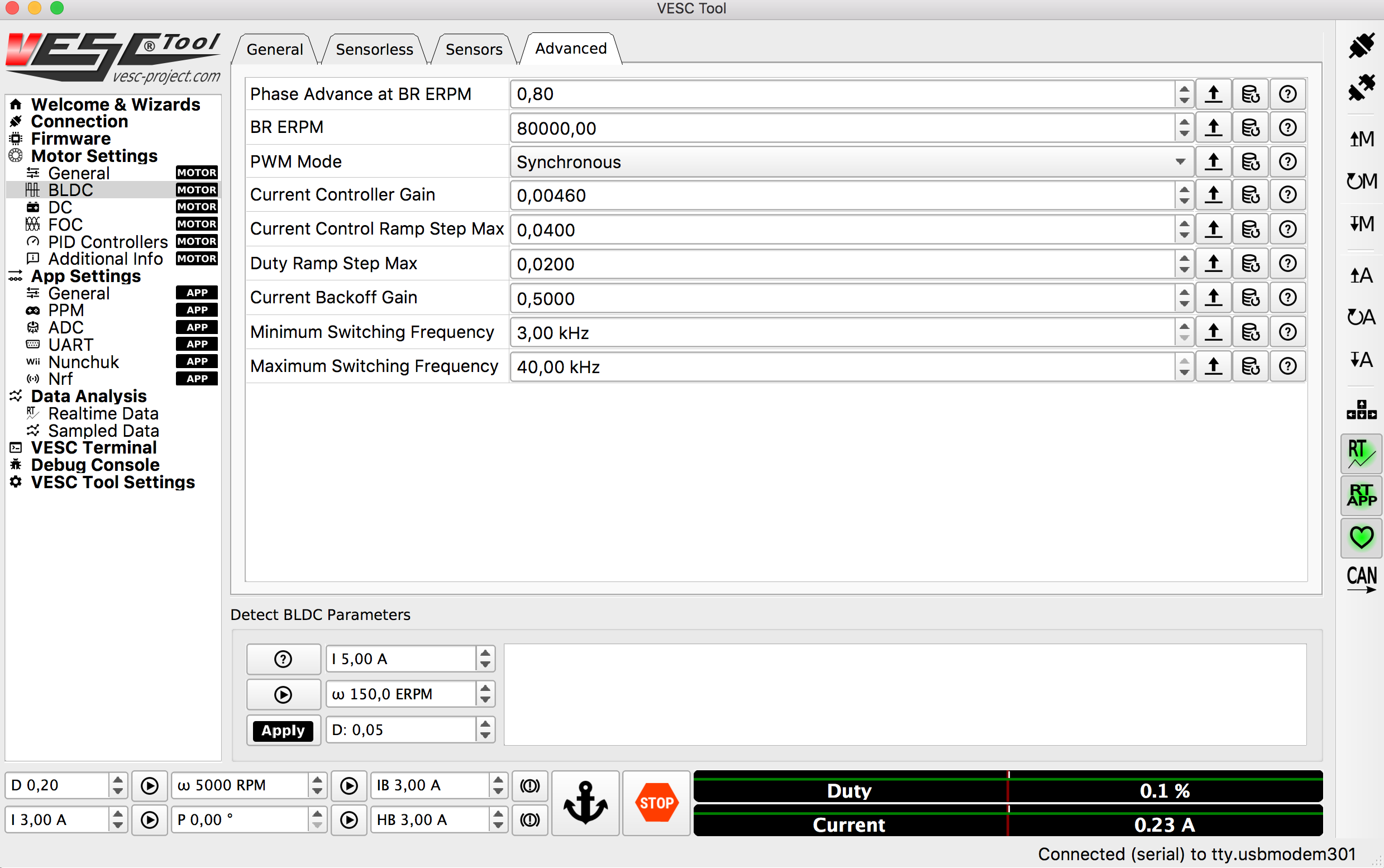 looks good to me

You could decrease the motor min to -50

i love that you said decrease^^

@Colson003 @Benjamin899 Guys, thank you for help so far. I did a test ride and it’s better now. However, after 2 km I stopped to check if engine temp isn’t too high and after this break, I had a problem to start. Similar problem like in the movie I posted yesterday. Also, slow climbing on the gentle hill was a huge problem for the skateboard (batteries fully charged). However, on a flat route, I made 33 km/h so I’m more than satisfied. The only change I made before I ride was to increase startup boost to 0,04, could it be a problem? Do you have any ideas on how to diagnose a problem? Probably additional Bluetooth module and iPhone app is the only solution to getting know what is going on?

did you run a motor detection? if it coggs you need to increase the duty a bit, dunno how much, normally there should be a tooltip in what increment you should increase it. 33km/h is quite fast, remember you have a 6s battery. And top Speed is also determined by gear ratio. Also climbing hills with a single drive is also realy straining for a 245kv on 6s. How much do you weigh?

yes, I did a motor detection. Currently realized that my custom HALL sensors are causing problems, so I’ve thrown them out. Will do a test ride and will let you know. I weigh 75 kg, on the previous motor (do not know spec) and controller I was able to make 25% uphill every day, with pain but it was possible, currently, 10% is impossible, so somewhere I made mistake setting up the skateboard

i am guessing the old motor had lower kv so it was easier at 6s to climb. I would like to know your wheelsize and gear ratio.

What brand esc is it?

@Benjamin899 My gear ratio is following:

@Colson003 The first electric skateboard was 1st gen Majestic Boards product, a small Polish company. It had a single motor, 6s battery, it wasn’t a beast but it worked fine. After two years the battery has degraded and shortly after a battery replacement, the motor died. Current spec is in the first post.

Did a ride without sensors, and it looks that if I push throttle rapidly, the engine blocks itself - made a nice flight before noticed this issue

So when I speed up gently, it goes even uphill, but once I move throttle to max, skateboard slows down or motor blocks itself.

i doubt that your wheel pulley has 53 teeth, not on 82mm wheels or wait, what pitch do you have

What is your Tooth pitch on the pulley, i doubt it is 5M.

Sorry, I had to google what is tooth pitch

I don’t have a precise tool to measure it, but it looks that it’s 5 mm. And counted twice, 53 teeths 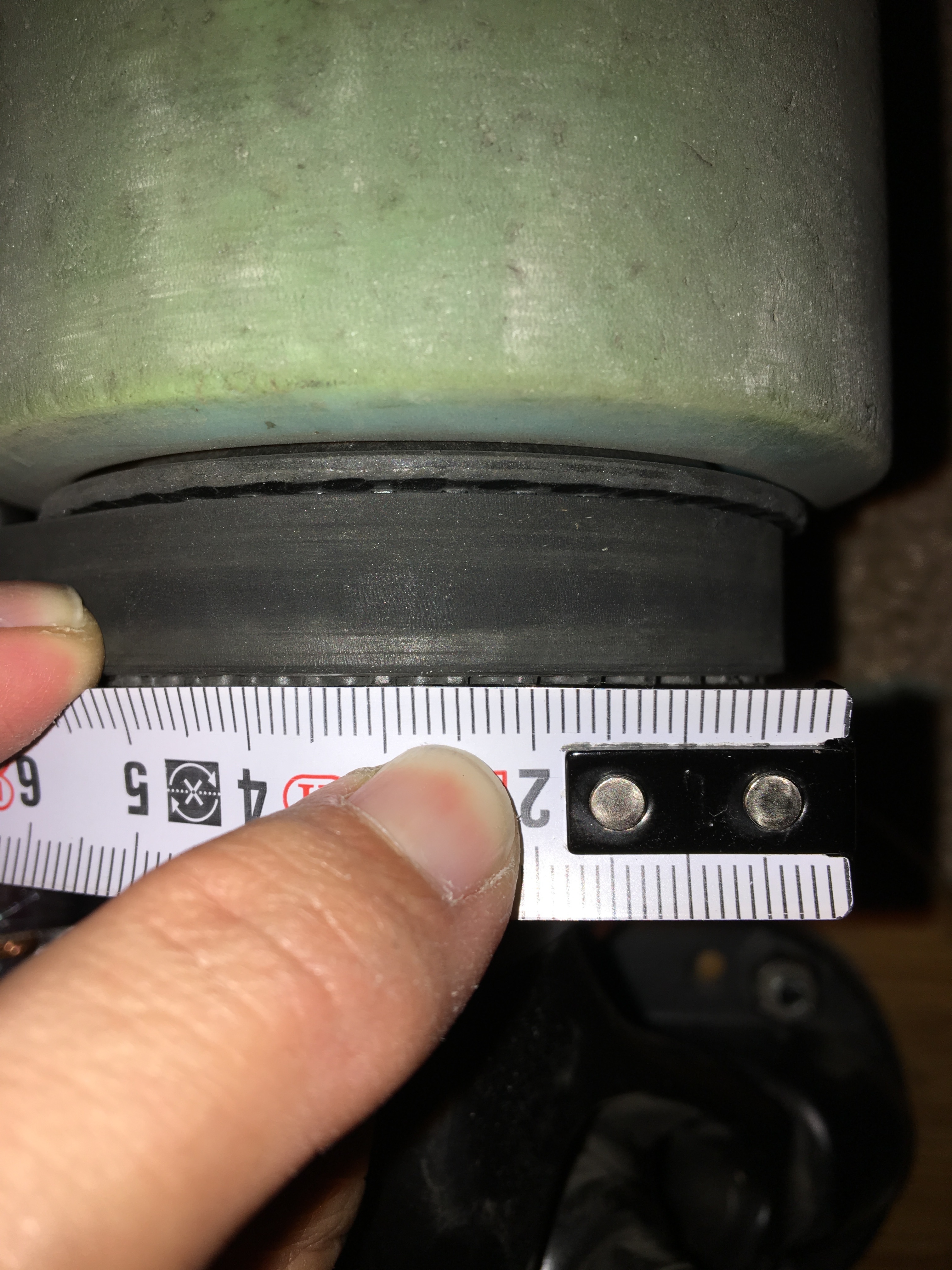