For sale modules from a 85D, P85D Tesla Model S battery packs. Perfect for home battery storage or a EV conversion! Donor cars and packs are always less than 18 months old and less than 10k miles when the battery is taken out. The modules consist of 444 Panasonic 18650 cells of about 3400 mAh nominal capacity. The cells are configured 6s74p,

The cells can be considered practically new with max 40 cycles on them. The modules will be shipped with two M8 screws on the terminals, protective rubber covers and a pigtail connector wire for the BMS.

Last time I checked these cells were not designed for 20 amps maxiumum discharge.

I’ve been dreaming about mounting some trucks on this beast

25 kilograms to be precise.

Source: my longboard and okashira on endless sphere

I’ll give you $50 for one, because the time it’s going to take me to break it down and build what I need will cost me too many hours to make it a viable option, sorry…

Yup, Okashira is one of the to go guys for li-ion stuff on endless sphere.

Are you selling them here thinking that people will split the cells out individually?

unless…take the whole module, keep it intact, then mount trucks to it. the module becomes the deck.

That’s correct, ludicrous mode on the P90/P100D will peak around 1500A, they had to switch to inconel contactors to keep it all from melting. The motors themselves can draw something around 150KW each.

Don’t forget while those are the peak specs of the cell, Tesla definitely doesn’t draw that much out of it, they’re aiming for as long life as possible and the less you stress your cells the better

Hmm, these seem like the perfect size to wire in series at 12s and put them on this thing. It’s one thing to go the farthest or the fastest, but how about the MOSTEST! Time to set a record for the biggest, longest, fastest group Esk8 ride on ONE E-skateboard. Who’s with me?! I’m thinking 4wd, VESC 6’s, 12s74p, 120-100 motors, giant Six Shooter wheels…umm… 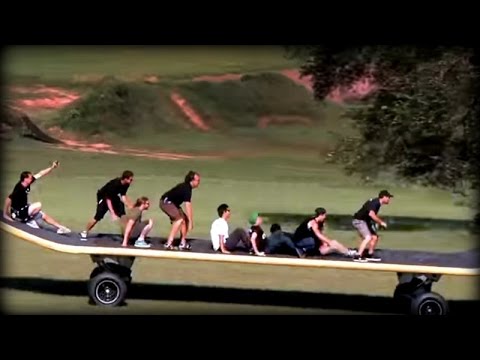 to draw you back to the community ASAP, cause I think this is a project that would have your name all over it. Even if it is just a crazy thought experiment.

Even I don’t think that ridiculous. I was thinking 10S74P

Well, they’re already configured as 6s74p, so it just makes sense to go 12s. Plus the VESC 6 should be able to handle the voltage, but how many amps x4 until they explode? 600 amps? 26,000 watts? I kind of really want to build this now.

You’d need motors with multiple sets of windings and one esc per set.