I’ve been doing lots of reading as I plan my first build. Where I am coming to at the moment is set out below but i still have some decisions to make and hopefully you guys can help!

My use will mostly be on the flats, but we do have a few hills on the cycle ways and paths ill be using - so needs to be a combination of hill climbing / speed - a set up that is good for both but not excellent at one i guess.

I weigh about 90kg, so with the board im guessing will be a 100kg being hurtled around.

I am now struggling with what kv motor shall I select. I have looked at the calculators and with have two scenarios below which id love to get some of your feedback on that target a 50km/h top speed. Which one will be easier / less strain on the electric gear? I’ve tweaked gearing for each kv option to target 50km/h.

So if I tailor the gearing for a 190 or 230 kv, it looks like the current demand is the same - so i could go with either kv motor and gearing to target the 50km/h target and have the same hill performance?

Are there any other considerations I should assess in this decision of motor kv?

Been doing a bit more reading and found this link. Has a bit more info but still not sure if there is a performance difference between 190 kv and 230 kv that are geared to go the same top speed. Is one more efficient? Do they have different torque curves?

Who have experience With using Low KV vs High KV motors on their Skateboards? What are your findings ? , preferences ?? Low being 150-190 High being 190 and up .

I would go with the lower kv which would lead to a power Erpm. I think if you look into vesc discussions you’ll see that vescs are rate for about 60k eprm max.

Hi - thanks for the reply.

I’ve seen the target is to set up the battery voltage, gearing and kv to hit your planned maximum speed with a motor rpm of 8,600 rpm, and this will hit the target of max 60k ERPM.

After a bit of riding, might be back down at nominal voltage for 10s at 37v - which if using a 205 kv motor gives me an ERPM of around 50k ERPM.

Anyone around this weight and use this set up?

you mentioned the tesseract adds 3 deg on the angle so going with the Caliber II 44 deg will actually give a total of 47deg when mounted w/o any risers?

How high off the ground is it with that setup? curious as I’m planning out my truck setup on my tesseract build too!

Thats what ive read about the truck angle.

I havent got the trucks or wheels yet but will let you know. Board arrived today.

cool great to hear! looking forward to hearing back from you and seeing photos with it! 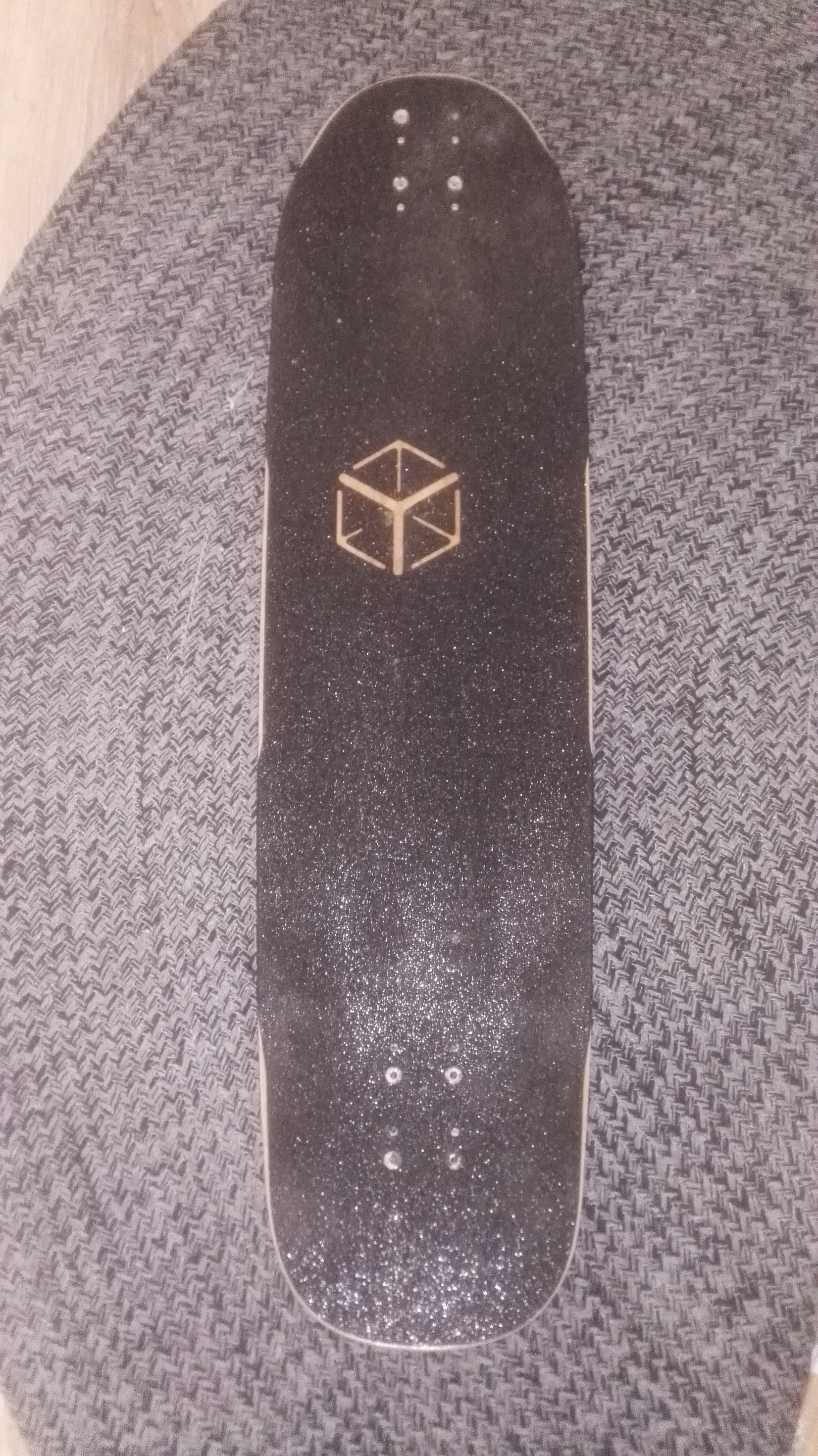 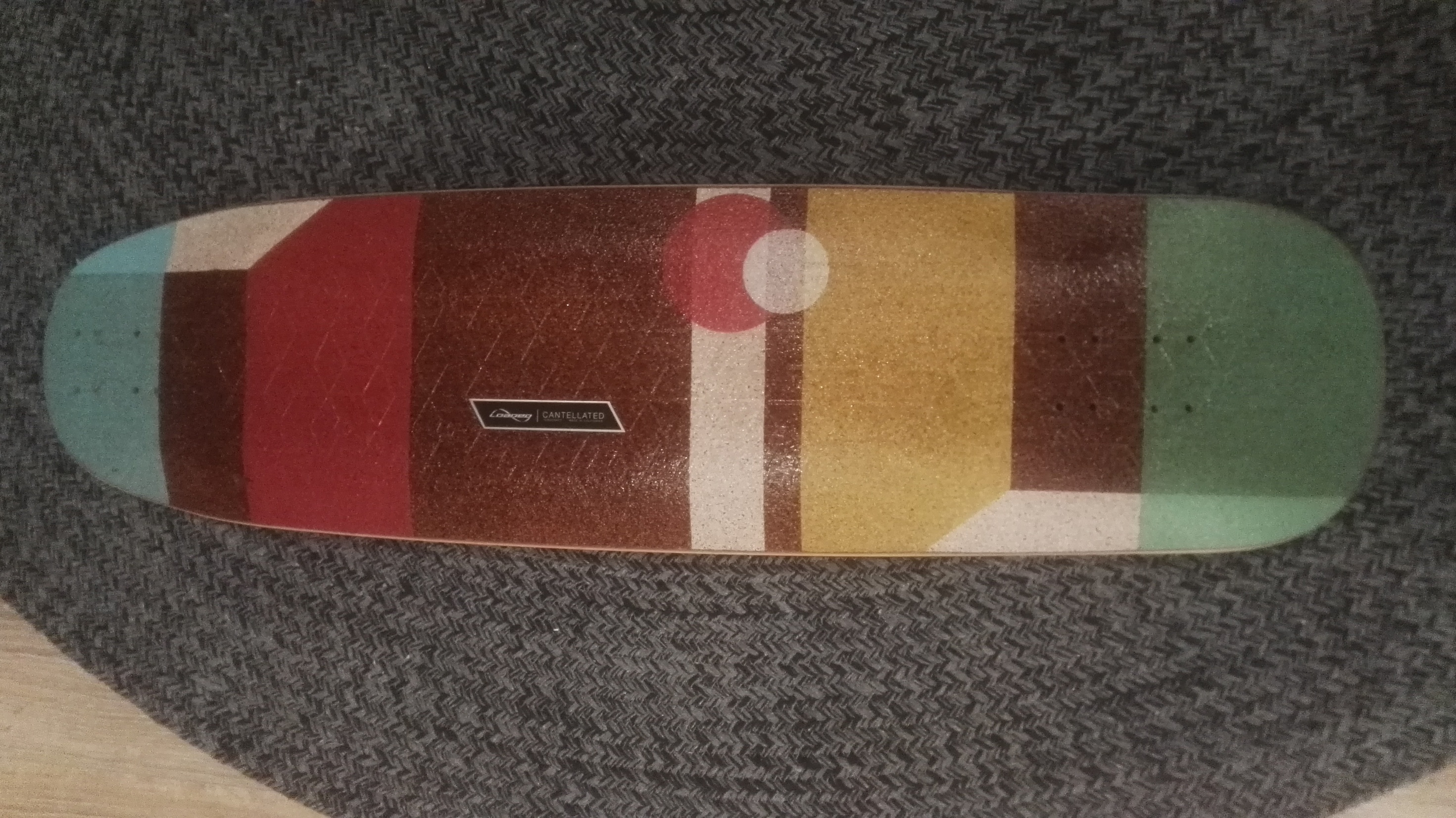 Hows the angle with the trucks?

I have the same board with 44° Caliber II. With my 90mm Wheels I need 1/2" riser and the right bushings.

Is it riding too low for your enclosure with 44deg trucks?

What motor mounts did you go for?

Looking around on available sites i’m leaning towards just getting the motors, VESC, mounts and pulleys from DIY electric. Im in New Zealand and they do free shipping on orders over 300 and seem to be fairly reasonably priced.

Why did you go for a sealed motor on your build? Do they overheat more easily?

Your soldering skills on your build looks epic!

I am using the hobbyking mounts. But you have to file down a little to fit to the caliber profile. Back then I tought, that I need/want a sealed motor. meanwhile I am not sure about that any more. The sealed one is heating up, but I can not compare to other motors. But the temperature of the focbox is higher then the motor, so that is the limiting factor here. 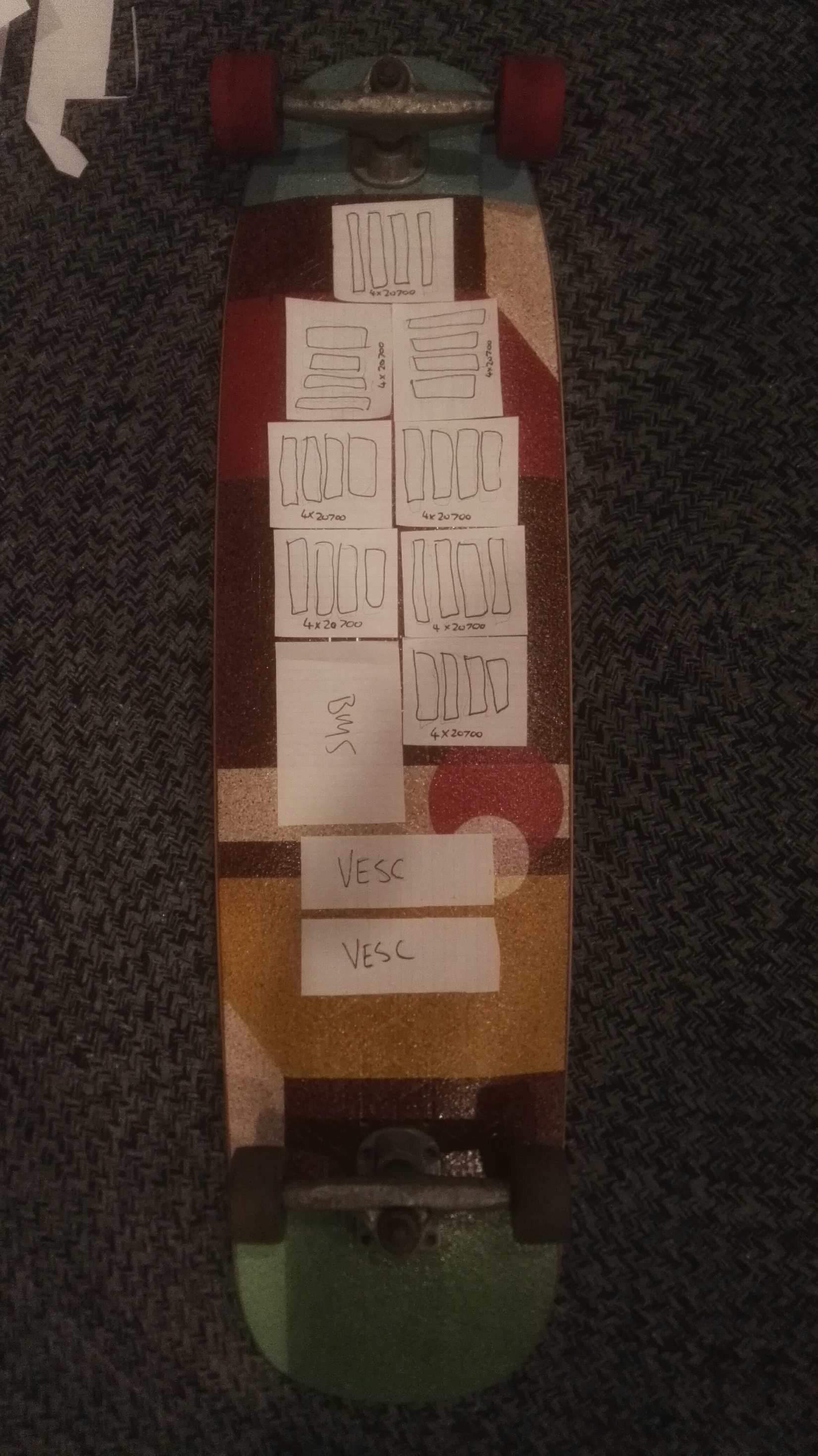 I have laid out the main components on my deck with some old trucks I had lying around. Im thinking the layout above will mean my custom enclosure can be shaped similar to the board itself so it kind of matches. Also makes use of the flat are behind front trucks without getting into the wheel wells. Using 20700 cells for good capacity.

Or this option below. Any thoughts from your experience? 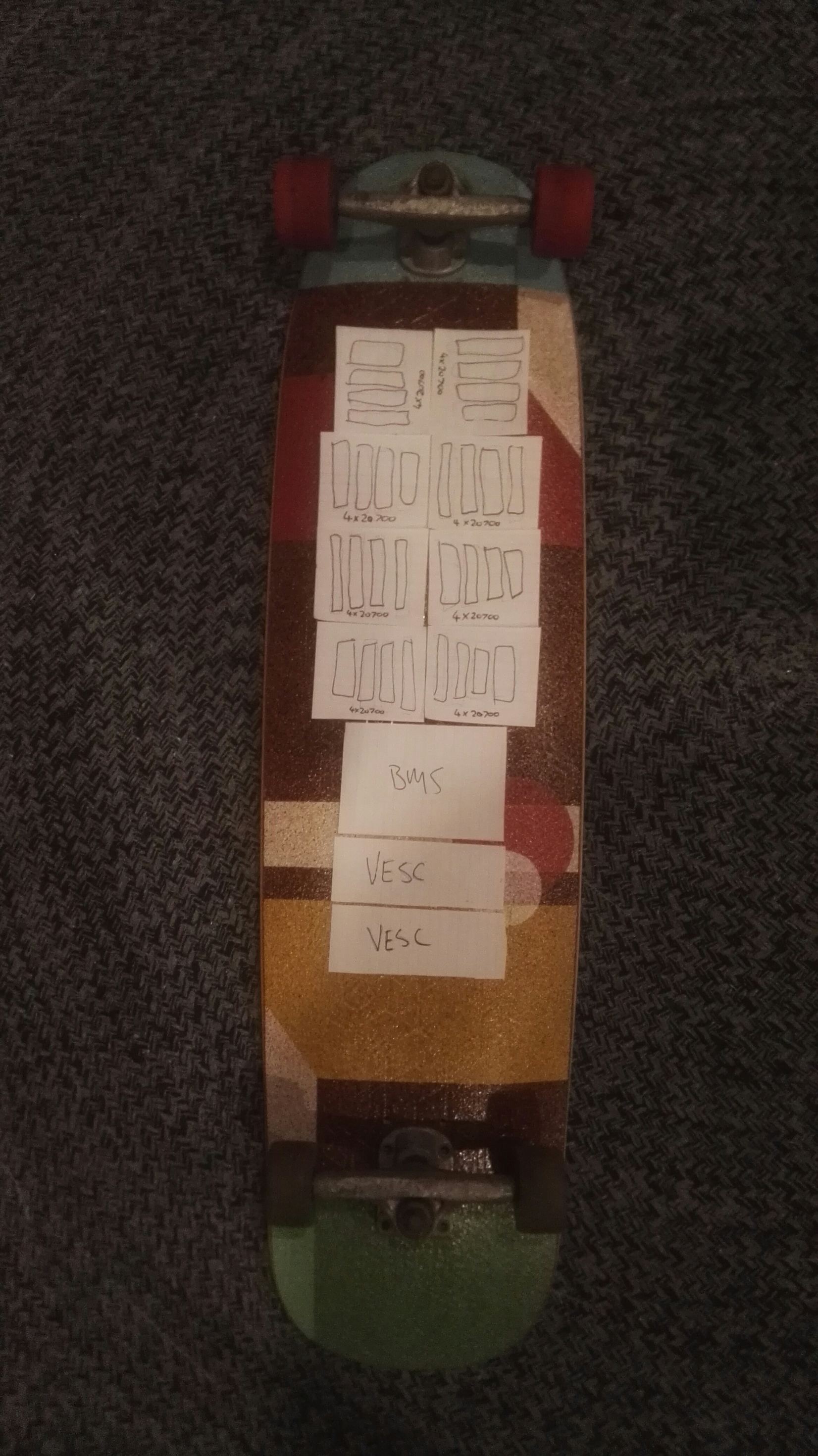