If you like hardwork and hate lazy fuckers, lol you’re going to hate me.

So the tale of this build is going to be a bit different than most. It’s both a semi-DIY build and an experiment.

The experiment: How long can I stay a lazy motherfucker. You’ll see what I mean by the end of the Build Log. I’m nowhere near having this build completed, but I’m hoping that posting early, you guys can help and recommend better parts and stuff

Deck Wise I’m running with the Laying it Down Low (LIDL) deck from CustomSkateboards.com. I’ve ordered 2 decks LIDL decks from them (one coated and one uncoated) with the uncoated deck being sent to @treenutter for it to be painted in Blackout Black. That should take two months min with manufacturing, shipping, and paint time. Thank you again @treenutter! The Flex on this board is real! 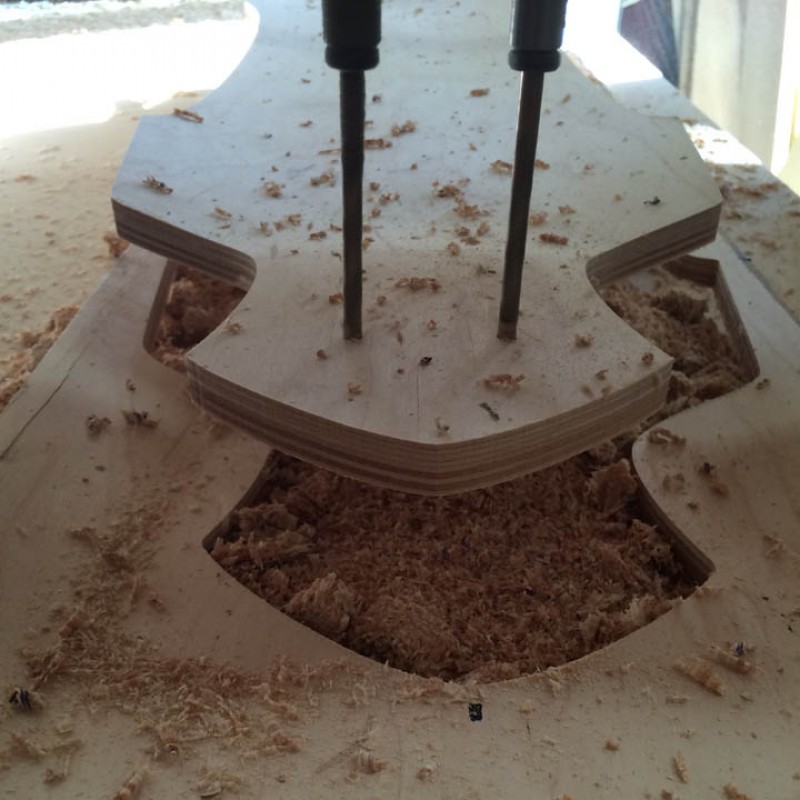 Drive Wise I’m going to be running Hummies V4 which come with a Paris V2 195mm 50° Longboard Skateboard Truck with custom 12mm axels, two tires and, two ABEC 11 Centrax Wheels. Since I’m trying to achieve a Gold-Black-White Anubis Theme, I’ll be substituting the ABEC wheels for Build Kit Board’s 78a Premium Build Wheels 97mm Black Wheels. I’m in desperate need of good quality & preforming Black-Gold Bearings so if you have any suggestions or solutions, please share! I’m also thinking of swapping out the Paris V2 195mm for Paris V2 180mm Matte Black & Gold. Any differences between the 190mm and the 180mm? 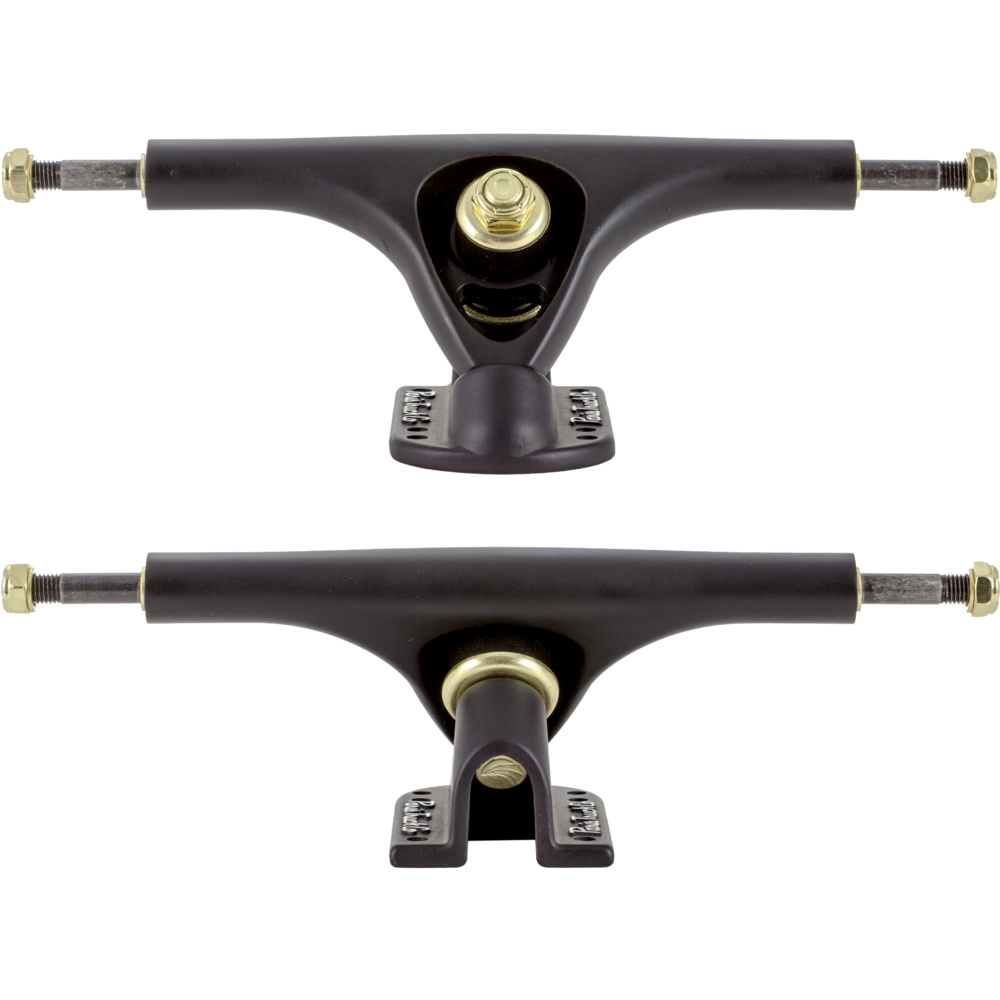 I’m running Dual FocBoxes bought from @JdogAwesome, the same one used in the Enertion FOCBOX Teardown & Internals so it has MG Chemicals Acrylic Conformal Coating. They originally had 3.5mm bullet connectors with 4mm Bullet Adaptors attached, but I opted out and commissioned @longhairedboy to swap out the 3.5mm connectors for 5.5mm Bullet Connectors. This is great since I can request @Hummie to do 10awg with 5.5 Bullet Plugs for motor wires. I also commissioned @longhairedboy to directly solder on CANBUS cables to the FOCBOXES for maximum security. No wires coming off today. Hopefully. I’m going to be running 18650 10S4P Samsung 30Q 18650 3000mAh 15A Battery Cells. The Pack will be custom made by @psychotiller. The FOCBOXES, along with any associated cables & accessories, will be housed by @Eboosted’s Custom Vanguard Fiberglass Enclosures. In addition to the battery pack, the Battery Enclosure will be outfitted with an LCD, BMS. Antispark Switch and USB port. The VESC Enclosure will be outfitted with Grommet Holes based on @Deckoz’s VESC Enclosure (I think it’s the best for modularity purposes) for Motor wires/Cable Riser wires, all by @psychotiller who’s also agreed to do wire routing. 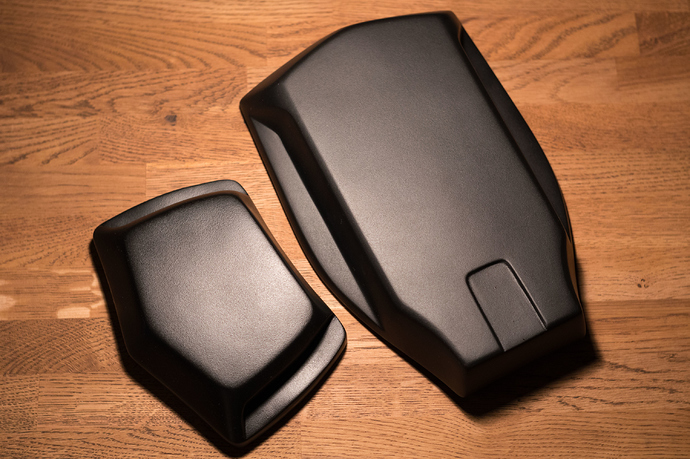 Telemetry Wise I’m using @rpasichnyk’s METR HM-10 Bluetooth Module since it basically gives me access to all telemetry-display apps available. I was going to originally use @GrecoMan’s modules, but I’ve decided to save them for potential later builds.

Remote Wise I’m having a Red and Black (since that was originally the Color theme of the board, too late to change colors now) Arduino Firefly Remote. I’ve commissioned @SeeTheBridges to assemble the remote and components. Right now he’s in the midst of finding a way to make the Arduino receiver plug and play (I bug him about it cause I’m a lazy bastard), as well as being able to update the Arduino via the USB port for future updates. 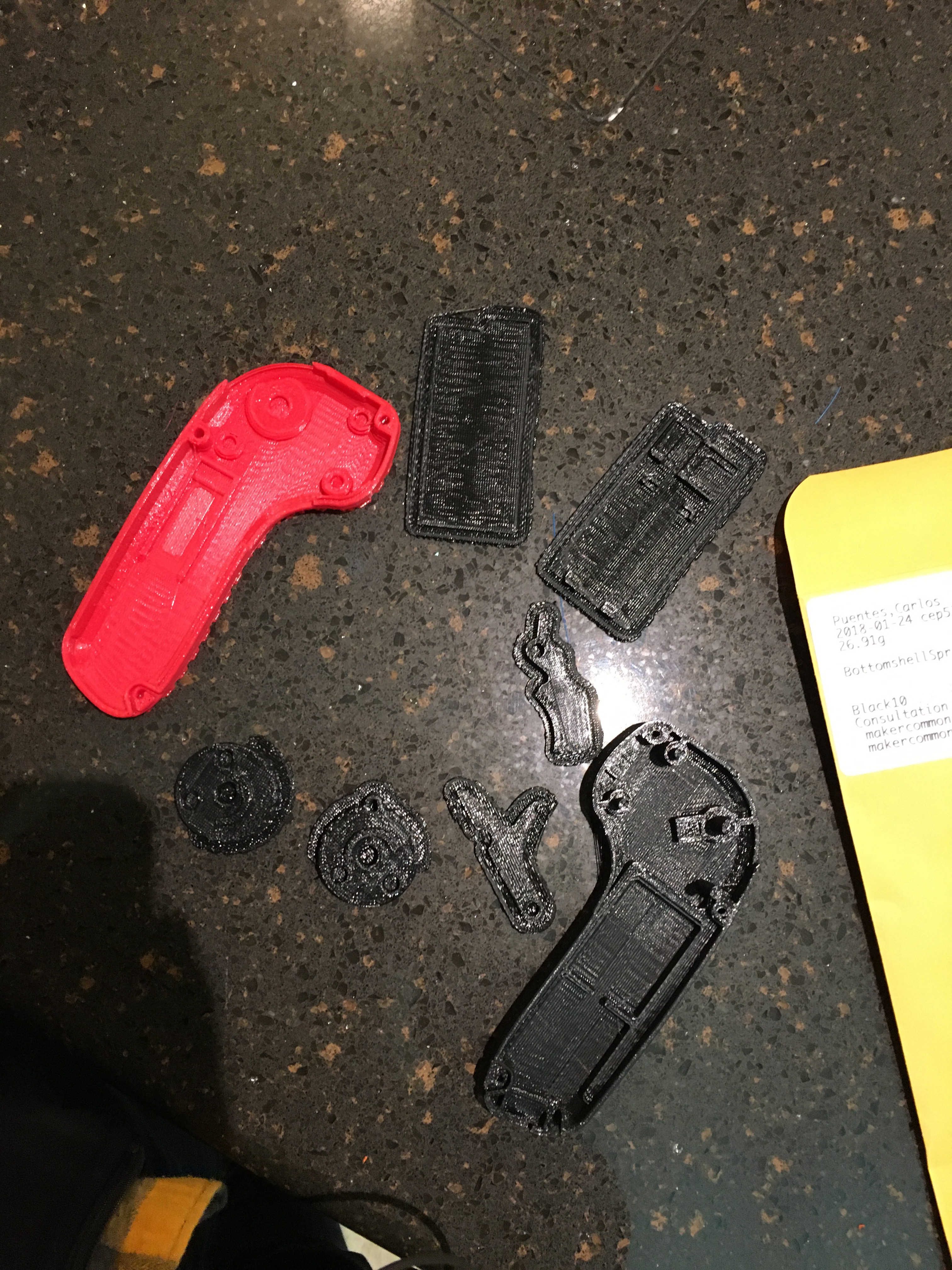 Additional Shit Wise Additionally, I’m going to be using UNIK Switchblade E-Cable Risers with 30cm Cable Wires (Yes I know, I could’ve 3D Printed it, soldered the cable wires on, and saved a hell of a lot of money, but I’m a very lazy bastard). The cable wires should help make the board look clean and sleekier.

I’m thinking of adding a Tile Pad or equivalent in the VESC enclosure just for added security measure. Won’t do much, but nice to have.

Fuck.Me. I’ve been avoiding the numbers since I bought the Hummies. For that price, I could’ve ordered the Deck and commissioned LongHairedBoy to build something. Or even get a Custom Kaly-board but I’m in too deep now! A Good $500 comes from my laziness and spending mistakes (about $50 is not being counted). I intend to sell the Paris V2 195mm 50° Longboard Skateboard Truck, ABEC 11 Centrax Wheels, 83mm Red Clear Wheels (if not refund it), and even the Bluetooth Modules if anyone wants. Hit me up if interested. This build is a nice experiment to see how much it would cost to commission the “DIY” part with the additional insight with what products we’re lacking over here in the states.

Let me know your thoughts (please be gentle) and I’ll keep you guys updated on this outrageously priced build!

Normally I dog on people for not putting in the work, but this made me laugh. I’ll by you a beer if we ever meat, you lazy bastard

Man you really did nothing on your own!!!

I’ll pay you for the beer delivery.

Though I do regret a sum of this build due to my indecisive and impulsive nature. A lot could’ve been saved, even with my laziness. Much more research could’ve been done to avoid the uneeded cost.

But it’s a good experiment nonetheless for the lazy. Hopefully, something beautiful comes out of this abomination.

Edit: Also this was done on a 95% disposable income. Wanted to see the results. After this build (or the next one cause there’s something I really want to make). I’m locking down.

Dude this is going to be a sweet ass build and totally not lazy to put it together. It’s surely going to be worth it, however I’d go 12s4p but potato potato

Pictures will come soon. The deck I showed you before is going towards a DIYEboard (yes I wasted even more money, I know I know, fuck me).

The first array of pictures will come from Treenutter during his paint job.

If you ever end up making Vanguard Enclosure with Fins, I’ll probably upgrade.

I feel like Specs/Price, It’s a bit (a lot) underpowered, (though the only thing holding such back is the enclosure size which can easily be fixed by order the 12s Vanguard Case).

The reason I avoided 12s though is the unreliability of it not breaking the Focboxes down. 10s is safer and has shown that it works, so I opted for 10s (which gives me the mileage I want).

Some people would ask why I didn’t opt for a Raptor 2 or Trampa, I don’t like the deck or either board, and I didn’t want a Boosted. I wanted a shape of a very specific deck, enclosure and look that didn’t compromise my laziness and this was the result

. I really hope it comes out looking like a sleek motherfucker.

… therefore, in the Year of the Lord twenty eighteen thu should name thee build as: Lazy Board

All members of the guild, repeat with my: Aaaaaa-meennnnn!

I would hate it, but one of my favorite DBS characters Beerus is basically an Anubis that Sleeps all the time, I’ll take it!

Does That mean I can get a “Lazy sonofabitch” Tag

Oh dude 10s will be more than enough honestly my 10s boards are too quick so now I’ve converted to controllers with slow mode (it also saves an unbelievable amount of battery). No joke i get almost 50% more battery life in slow mode which is more than suitable for 90% of riding around unless you want to do a speed run i guess. 30mph is more than fast enough for most riders most of the time. I’d much rather have the super torquey take of to smoke the other group riders up the hills

Hopefully, someone comes up with a way to program slow modes on the Arduino remotes , I barely ride fast , but would still like to have it just for special occasions (ESK8Con 2018

So currently my fav remote is my benchwheel. I had always use the mini but i hate swapping rechargable batteries all the time and a few of my boards have usbs on them so worst case i can stop for a sec and charge the remote off the board battery. I also no have a nano x for my spud (has very little room for throttle or braking response or a short throw and pull if that makes more sense), and a new maytech (close second favorite) which all charge usb and have slow modes built in that are great! My last remote i haven’t used yet is a mastercho gt2b that i built

I would consider not switching to the 180mm paris trucks from the 195. The hub motors will stick out farther than the wheels up front creating kind of a dragster look. I run this board with 180’s and 195’s but have it set up as a front wheel drive. Fuck. That sucks. Why can’t Paris have more color options for the 195mm Series

I see, even then the last thing i want to do is push my focboxes to the absolute limit. I rather have it working comfortable fine at 10s with specs that’s enough for me.

You could switch out the base plate. The hanger will still be black though.

Just paint them any color yourself. I’ve had pretty good luck painting trucks

Just paint them any color yourself

@ATLesk8, you already know the second name of this board.

Lol just pay @Hummie extra to paint them for you