Made a bunch of changes recently which freed up a lot of time and a little bit of money, and since my job entails running cnc’s figure it was about time to build me an electric longboard. The heavyweight is quite a suitable name since without batteries it weighs 18 lbs. 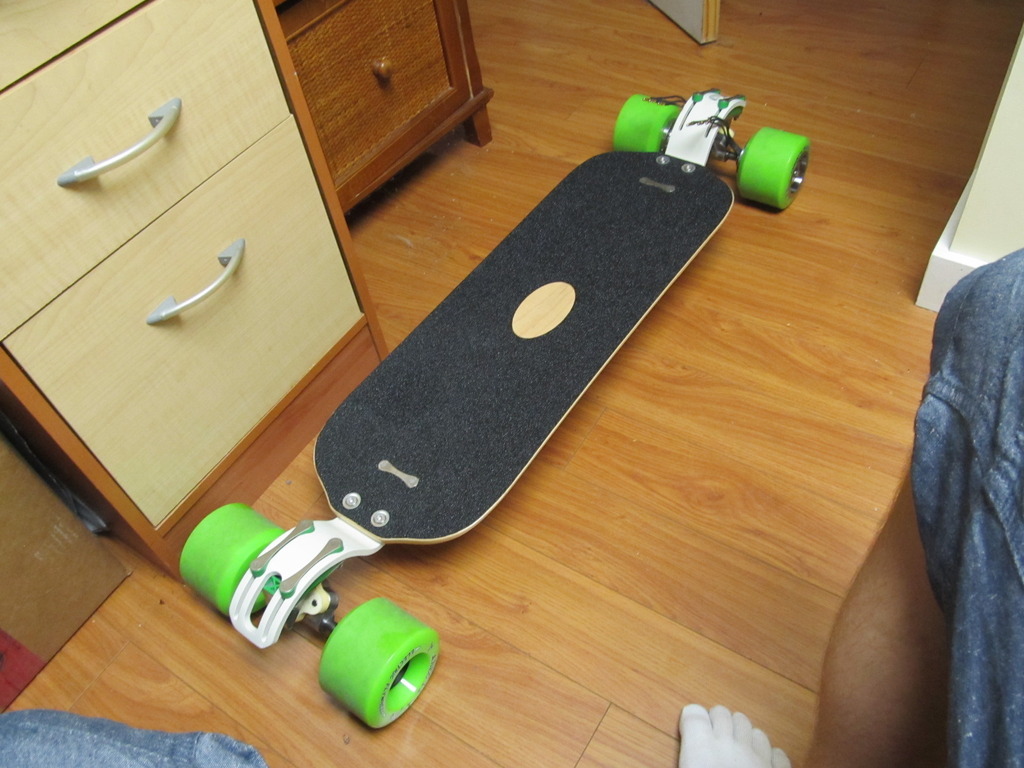 First was to take apart the sk6374’s and figure out how I was going to mount these stators onto my roja hybrid hangers. Did not foresee a problem though since the hangers are cylindrical. 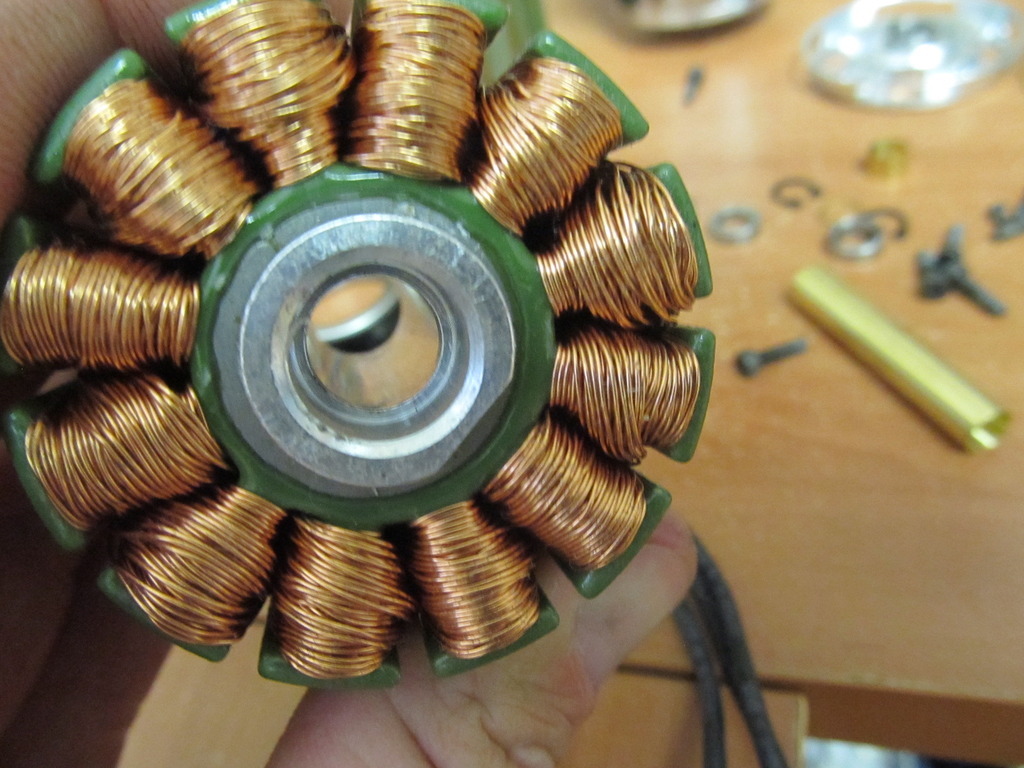 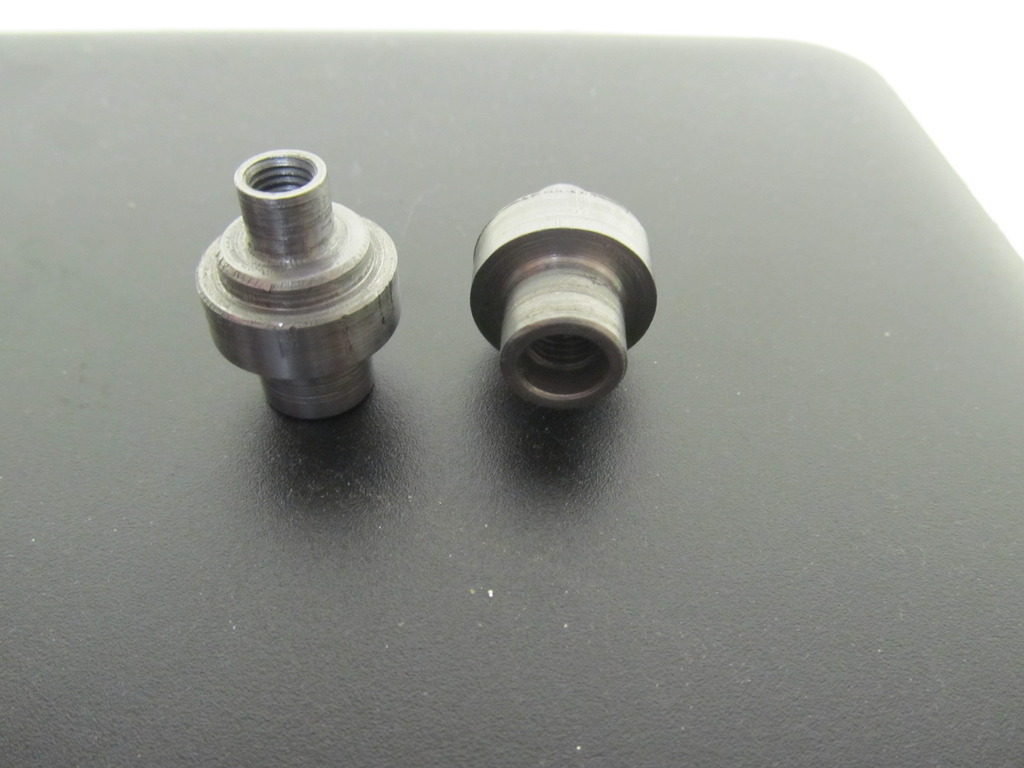 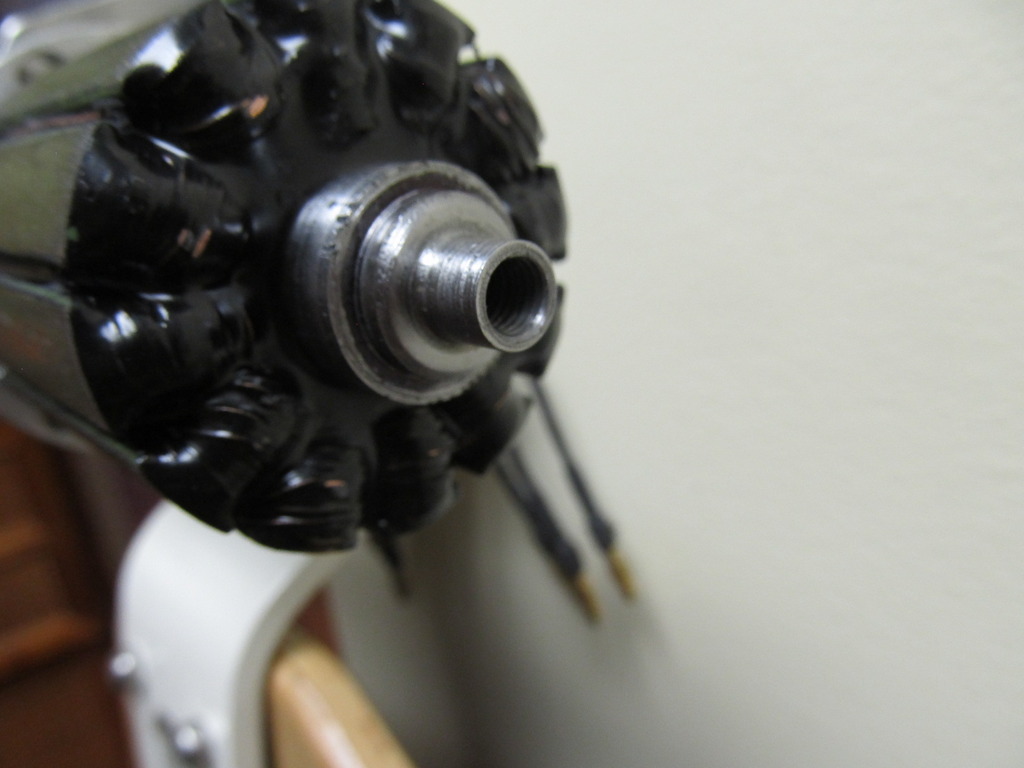 And as you can see, decided to put thermally conductive potting epoxy on my windings

The other side conveniently had three screws that I could use to fully secure the stator from movement, and ended up making a flange welded to the hanger to support everything 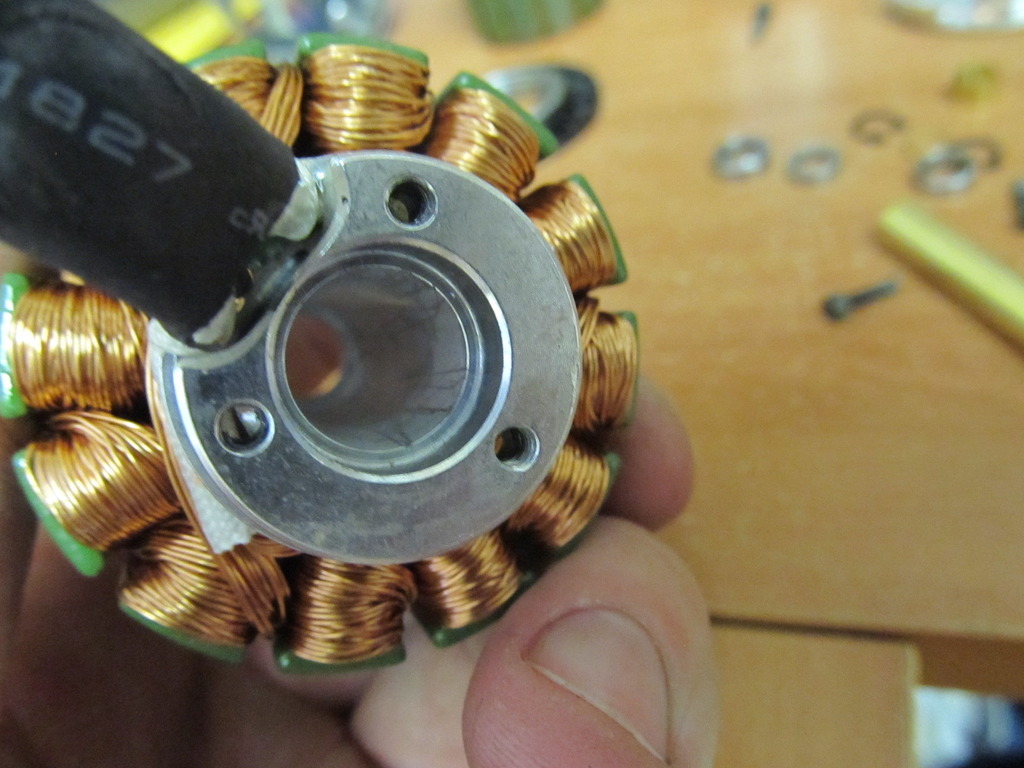 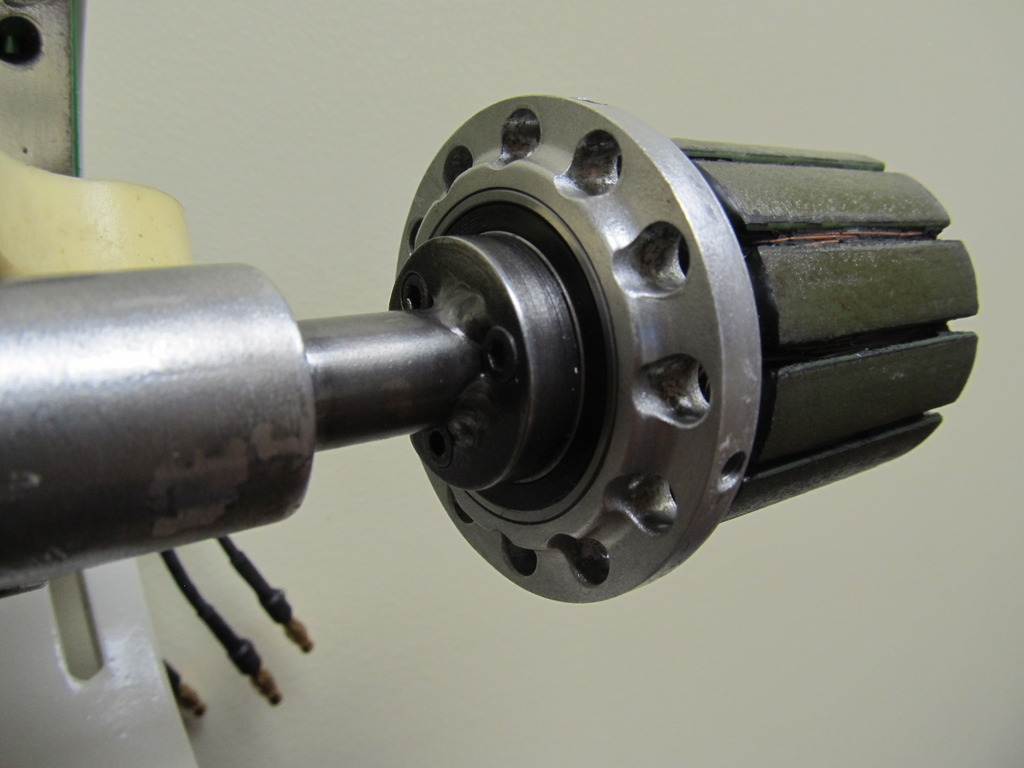 Made a plug for the can so that I could get the potting epoxy in between the magnets as well. 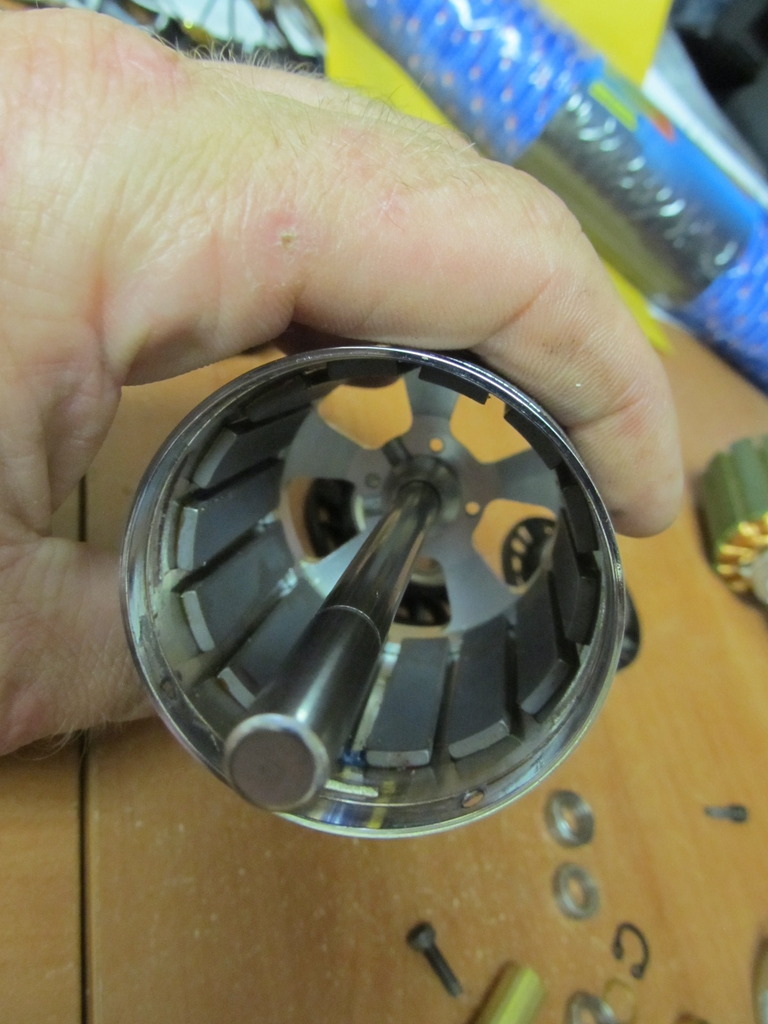 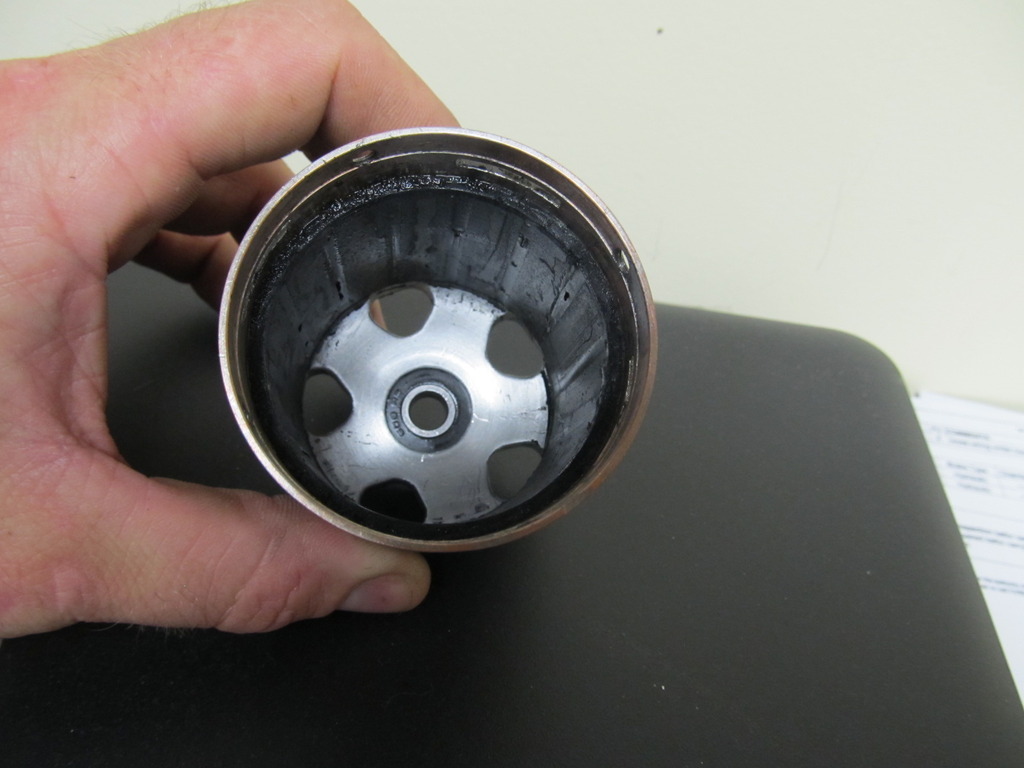 Decided that the original flange for the larger bearing was too flimsy, and it also needed to be a little wider so I could tap larger screws thru it to later on secure the liner which slides over the can and bonds the urethane. Also the tiny little bearing on the other side just would not do, so made a new flange which fits regular 608 bearings, and beefed it up a good deal. 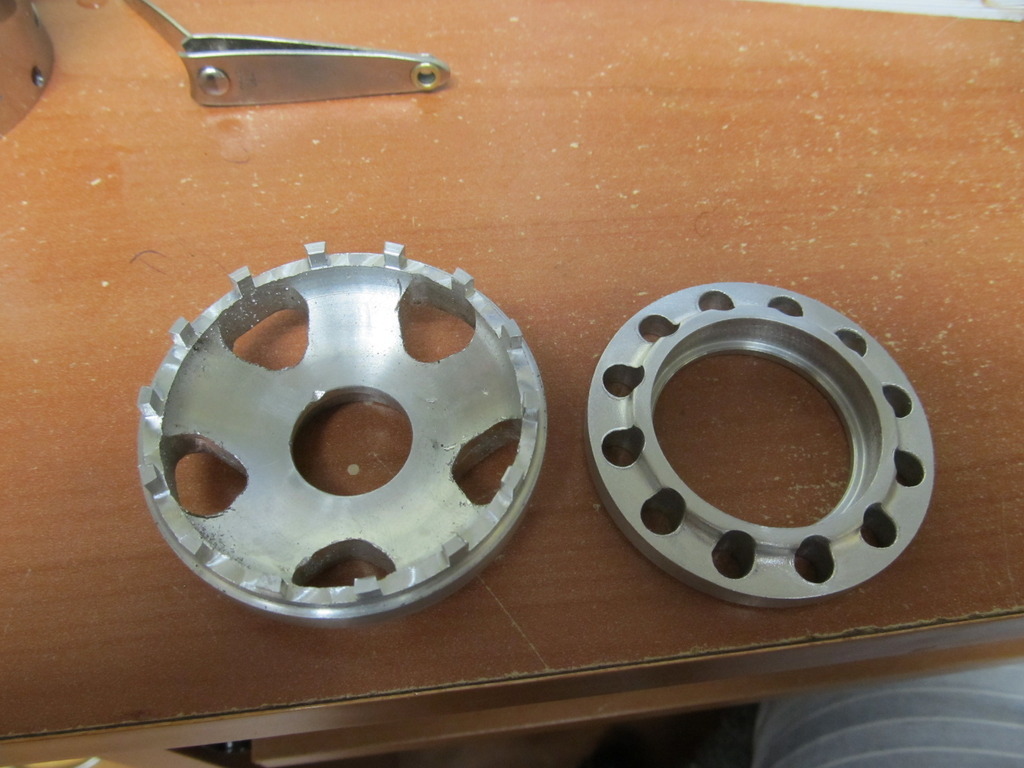 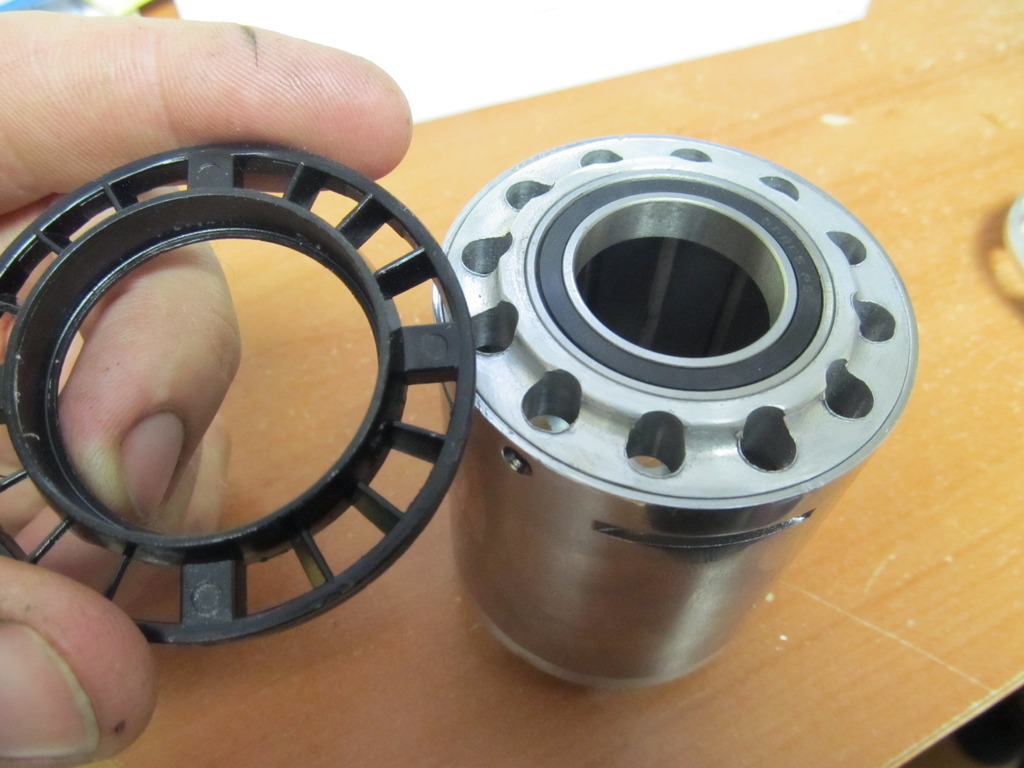 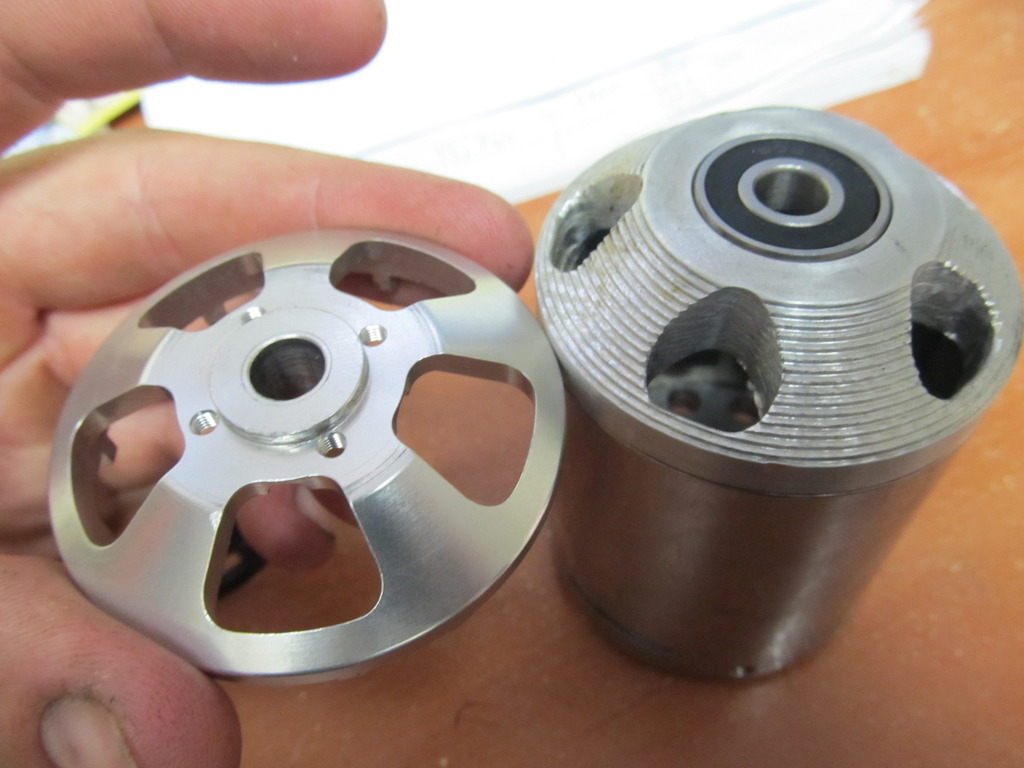 Everything went together just as imagined 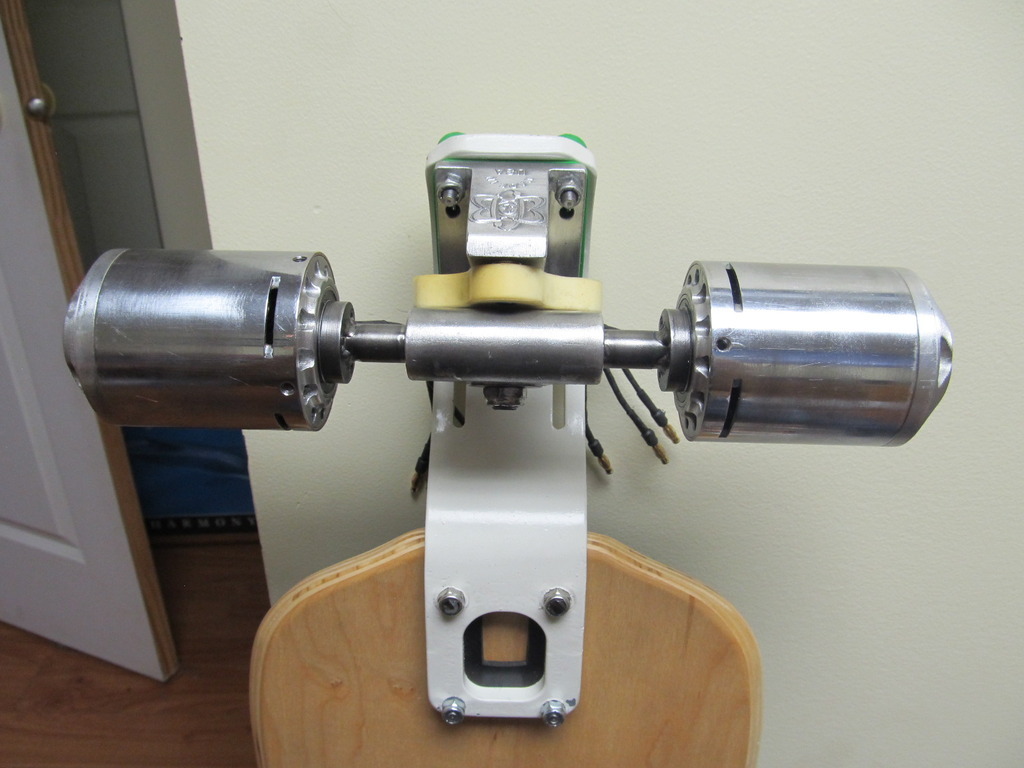 Had some urethane cored out for me and made some liners to bond them to. Ended up making the liners out of steel, it is a little heavier but far stronger and from what I understand thru asking about on the sphere, steel on the outside of the can helps keep the magnetism where it belongs which couldn’t hurt 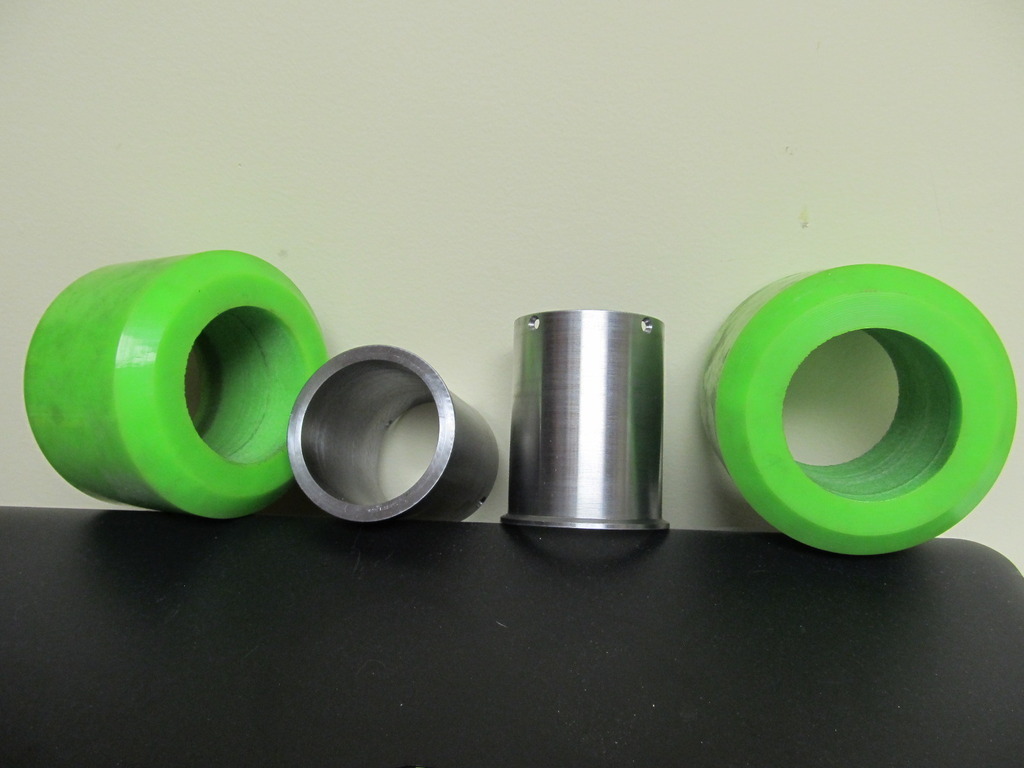 And with everything put together, it is looking pretty stealthy!! 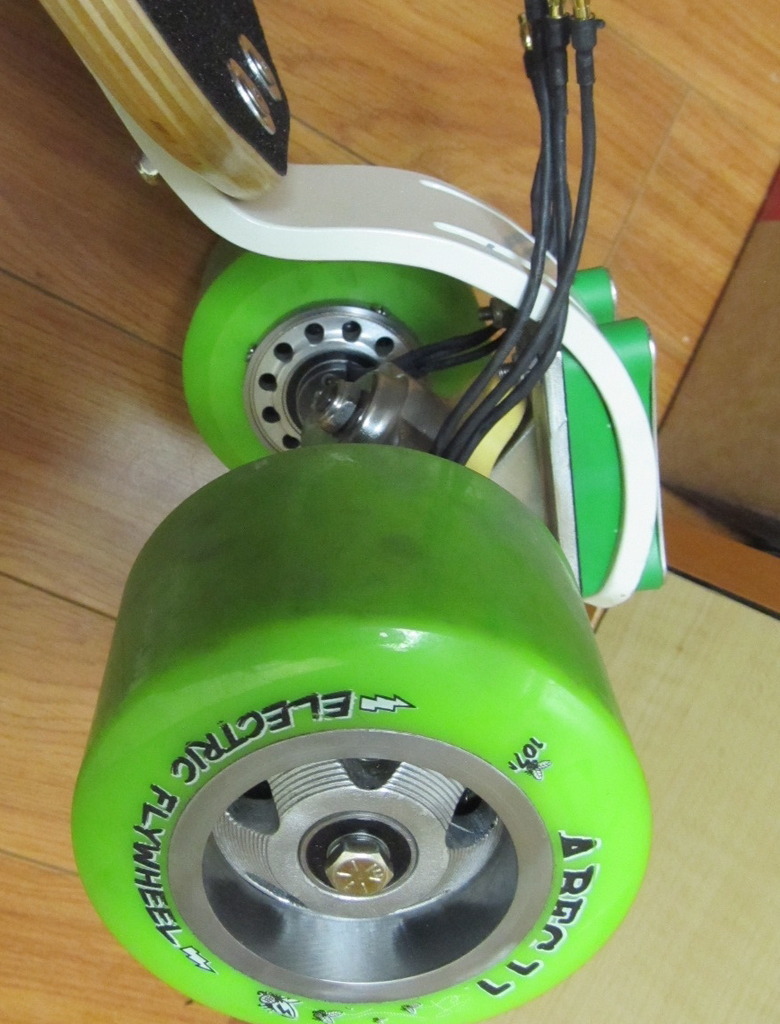 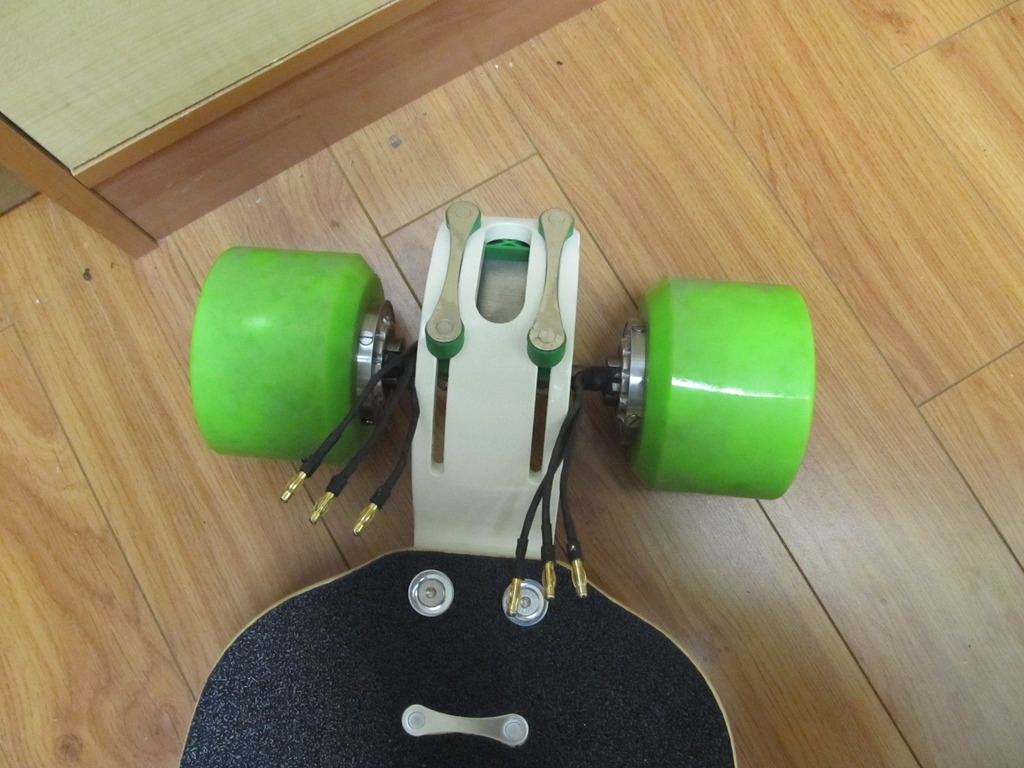 Also decided to 3D print badwolfs enclosure for the gt2b 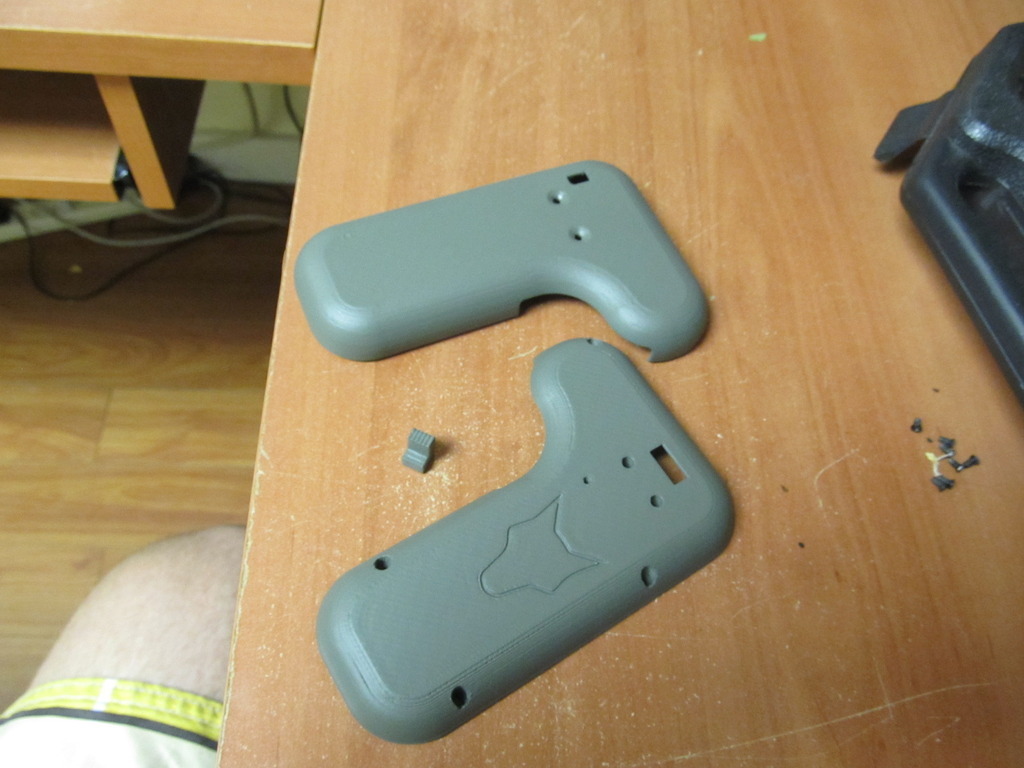 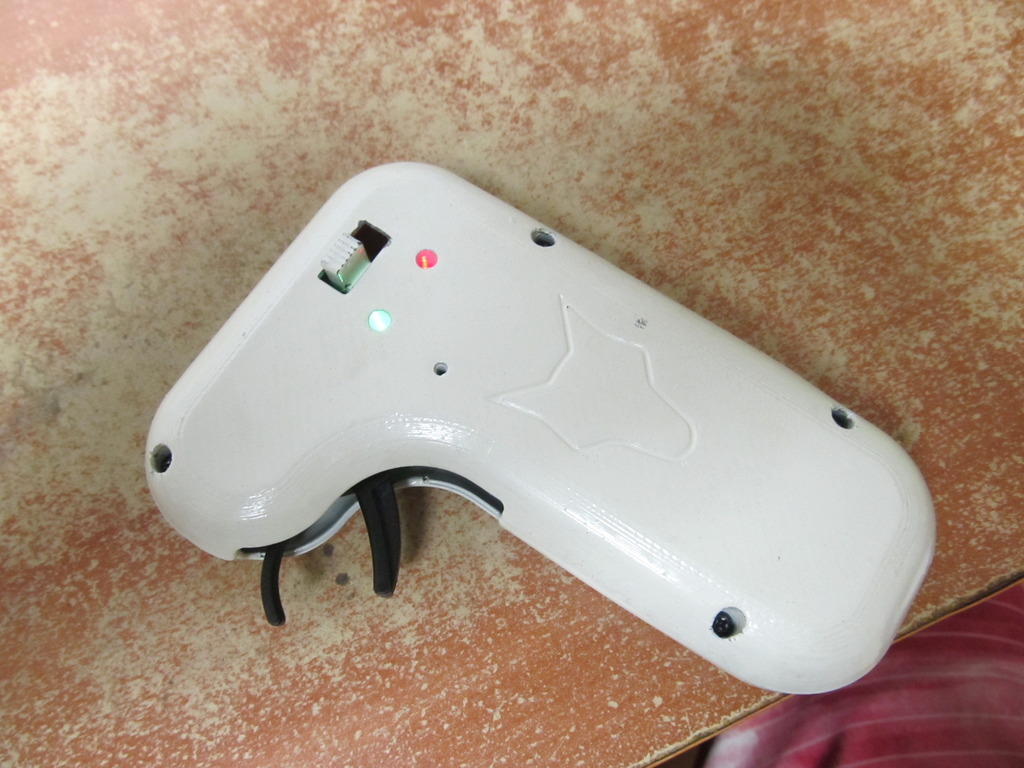 And that is where it rests for now. Am making a big move out to Australia come sept 20, and will be taking this with me and getting in touch with onloop about putting a space cell underneath the deck, as well as getting jacob to set me up with a couple of vesc’s. Will keep updating this thread as everything comes together, and will take video of her maiden voyage!

Nice work! Putting the normal skate bearing into a beefier end cap was a smart move…

What ESC & Battery will you use?

Edit: I just re-read the last paragraph! It’s going to be awesome!

Did you document the process of making the modified Gt-2b… that would be a great thread on here if you can show it being done step-by-step.

Specifically showing the mods (if any) to the pcb.
Comment of level of difficulty etc

EDIT: I made a new thread about it here: Build your own compact Eboard Controller | GT2B Case mod

You betcha, twin vesc’s and a space cell!

Did not document the modification of the gt-2b unfortunately, would have been a good idea, but it is very straight forward to do with badwolfs instructions on thingverse. (http://www.thingiverse.com/thing:922378)
So much so that even me with a complete lack of experience with electrical was able to figure it out.
One thing that I had to clarify with badwolf was regarding the resistors and how exactly they were set up. Basically if you look at the instructions and notice the highlighted three pins marked resistors, you take one leg of the 1st resistor and solder to the outside left pin, one leg of the 2nd resistor and solder to outside right pin, than connect the two free legs together to the middle pin. And that is about as complicated as it gets.
Afterwards I covered the entire thing in liquid tape to seal from the elements.

On a side note regarding the g2tb, do you know how the receiver is connected to the vesc? Noticed that Benjamin is focusing more on the wiireciever side of things.

…the GT-2B Connects using normal servo cable. you can see here how i did it for Dual VESC. But actually you dont need the servo splitter. The VESC can be connected via CANBUS for sync of two motors.

My updated version of a case for a slimmed down version of the popular GT2B transmitter. Some of the updates are: Original screws to hold the case together (now you only need to supply 2 x 3m screws + nuts for the pcb and potentiometer) Using...

Cool thanks for the video. Will be picking your brain a little more down the road when am ready to set it all up.

Wow, this is amazing. I’ve seen a few people make their own hub motors, but for those of us without access to CNC equipment it sure would be nice if somebody would start selling them. While I think I would prefer the flexibility of belt drive systems, direct drive is definitely something I want to feel for myself and be able to offer people for custom builds.

During the build had often thought about making a diy kit with some of the smaller parts that I made, something where you could buy your own motor take it apart and replace with the supplied parts.
The only problem, other than leaving my job running the cnc’s so I can go play with the kangaroos, is that everyone has their preferences of trucks they like to ride, and it is quite difficult to brace a motor properly using only the common 8mm shaft on typical trucks, and this is typically what people want out of a hub motor, the ability to take it on and off with ease.
In my opinion the only sure way of doing a hub motor securely with the ability to take it on and off is to bolt on to a welded flange like I did, rather than epoxy or grub screws. And the only real good way of doing this is to use a truck with a round hanger like the roja hybrids.
That being said it will be interesting to see what Jacob does with his hub motors, and would like to try them out later on down the road, though the securement still seems sketchy to me, as the last thing you want is to have your motor come undone while braking down a hill or powering up one.

It seems like it should be possible to create some kind of bolt on bracket for these that the back of the motor can fasten to. Calibers would be a good candidate for this because of their hanger’s D shape. That would allow the whole assembly to slide over the axel and with the mods you made for the bearings it should just slip right on. From your experience here, does that sound like a possibility?

With a 6374 it would not be possible since the stator bore is far to small to slide over part of the hanger, unless you do what pediglide does and turn the hanger down to fit. If you don’t position the motor over part of the hanger everything will stick out way to far to be practical.
If you could get a custom stator made with the internal bore large enough that it could slide over part of the hanger, as well as making the stator flange with the three holes larger to accommodate the larger bore, than having a bolt on flange to mate to the stator, and an axle extension like my build, would definitely work. But then this moves away from off the shelf parts for the hobbyist.
The only real way of using the 6374 for a hub motor is to turn a hanger down, or find a hanger small enough to slide into the stator bore, this is is where the rojas hybrid is ideal.
Now that you got me pondering this though, someone really should start looking into an approach like what you mentioned. Building a hub motor kit that fits any truck would be pretty slick!

It’s quite an interesting problem for sure. Custom stators aren’t exactly cheap, either, since they’re basically laminated steel of a very particular type that has particular magnetic properties.

Something else that might work is an already shorter hanger with the axle bolts replaced with longer ones. I know Independent makes some really short hangars, but i think their axels are pressed in, not screwed in like some of these precision trucks are, and the profile is kind of wrong for this anyway. Just a thought though. Of course CNCing your own hangers is also a possibility if you’re already machining some of the other parts anyway. You could then sell a kit that would let you assemble it all without having to weld anything.

You should go four wheel drive at some point just because.

Where are the batteries going to go?

Think I will be more than happy with two motors.

Will be using the spacecell from enertion and strapping it under the deck. Have 3.5 inches of clearance still.

So decided the make a nice flat little nook for the battery and vesc’s to fit into. 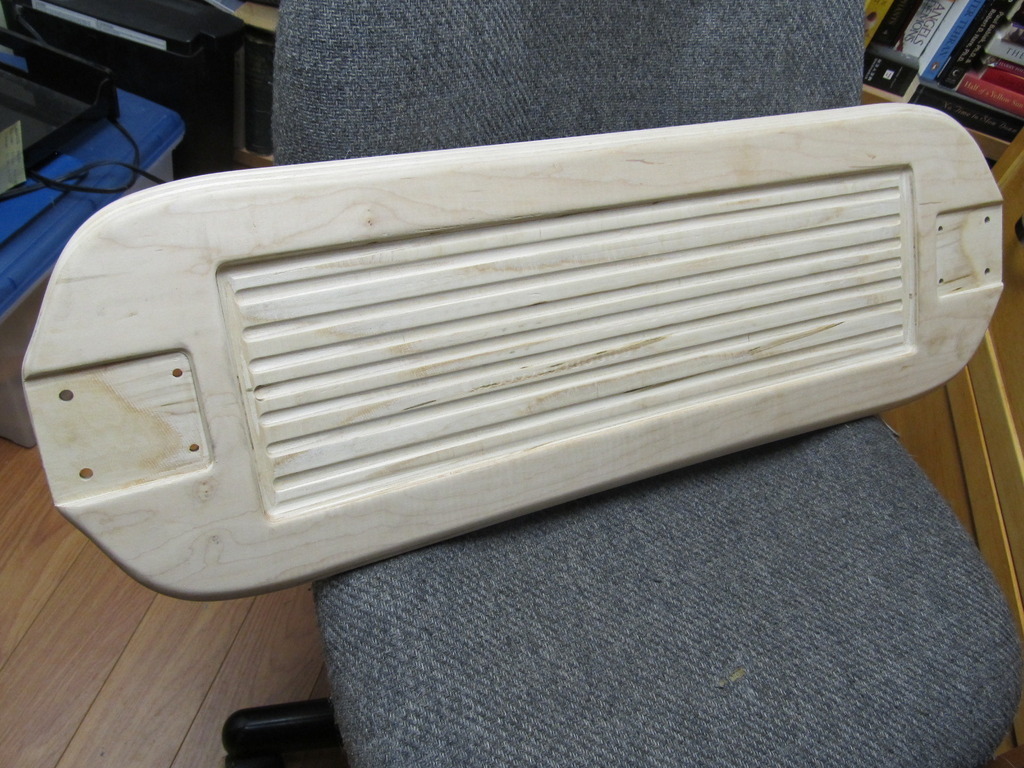 Ordered a vacuum bag kit from roarockit as well as some carbon fiber to add some strength back into the deck, the material wont be in tell next week, but thought I would upload a picture of what I did on the cnc at work today. Will add some more pictures of the layup within a couple weeks.

SWEET… did you make the entire deck yourself?

Nope, ordered the deck from the same company that makes the adjustable brackets.

Thinking about it now, it would have made more sense to make it myself from scratch, and probably a little cheaper, now that I am customizing it the way I am. Oh well, live and learn!

So any timeline for this new bigger space cell you have in the works? Will likely be ready to order by the end of the month.

Looking forwards to strapping it under my ride!

Supplies came in yesterday and immediately started laying fiber, unfortunately did not have a lot of time from getting off work, tell too dark to work to sneak in any pictures of the process, am in a mad rush to get this done before friday.

So far everything has been going fairly smoothly, aside from the vacuum bag being a real pain to work with as it is so thick and does not like to give. Am hoping this last layup I did tonight will be the final, and if it is will have used 6 layers of carbon fiber. Three layers isolated in the battery space and three full layers covering the entire deck. Am a little curious to see how this last layup will turn out since I did 4 layers at a time, and putting the layup into the bag was a bit tricky…it will likely have a few imperfections in the final result, but am not overly concerned since it is not for form but simply for function. 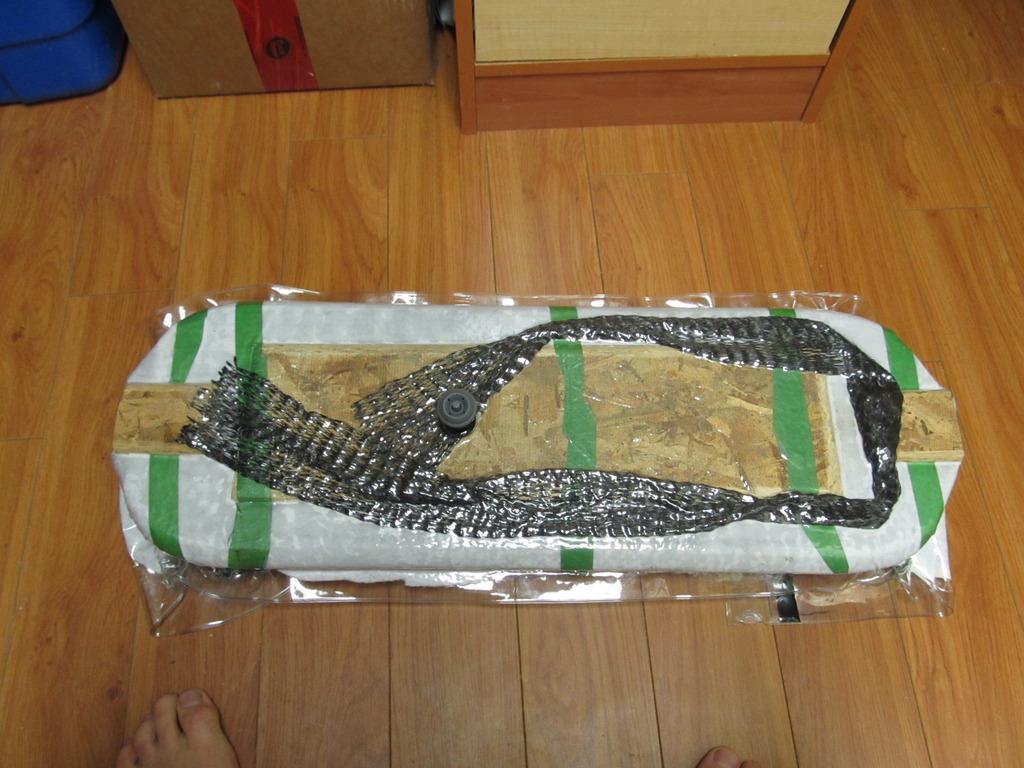 And here is another picture of what I made at work the last couple days. 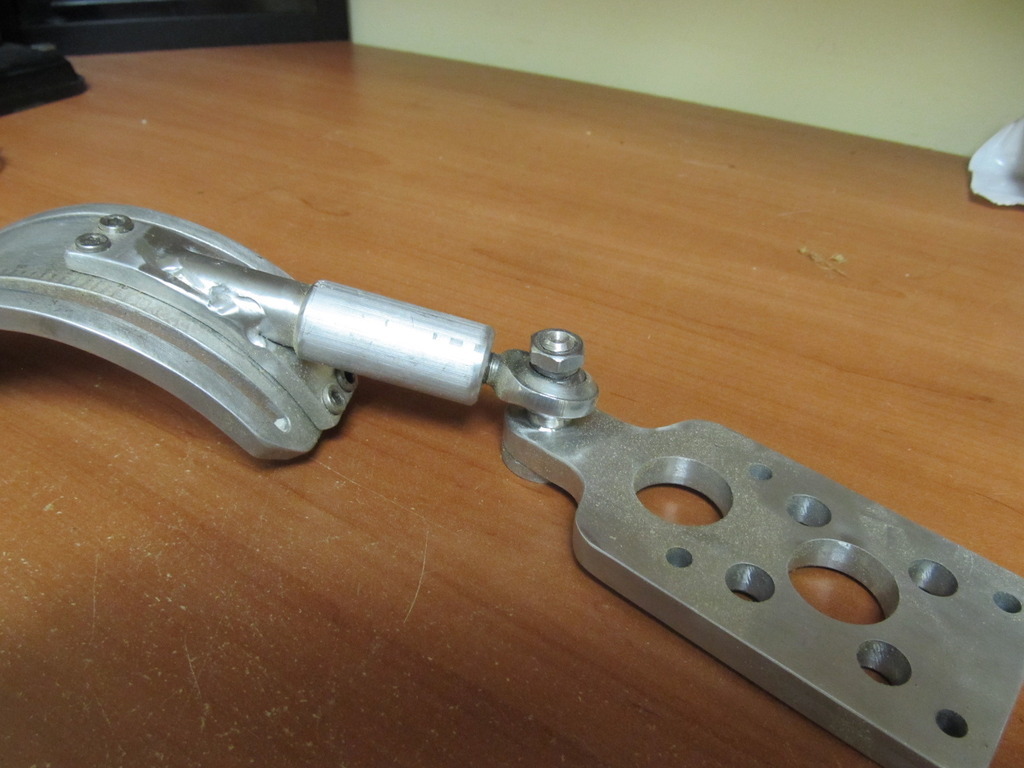 Am going to travel the east coast by longboard in Australia, so decided it would be useful to have a trailer