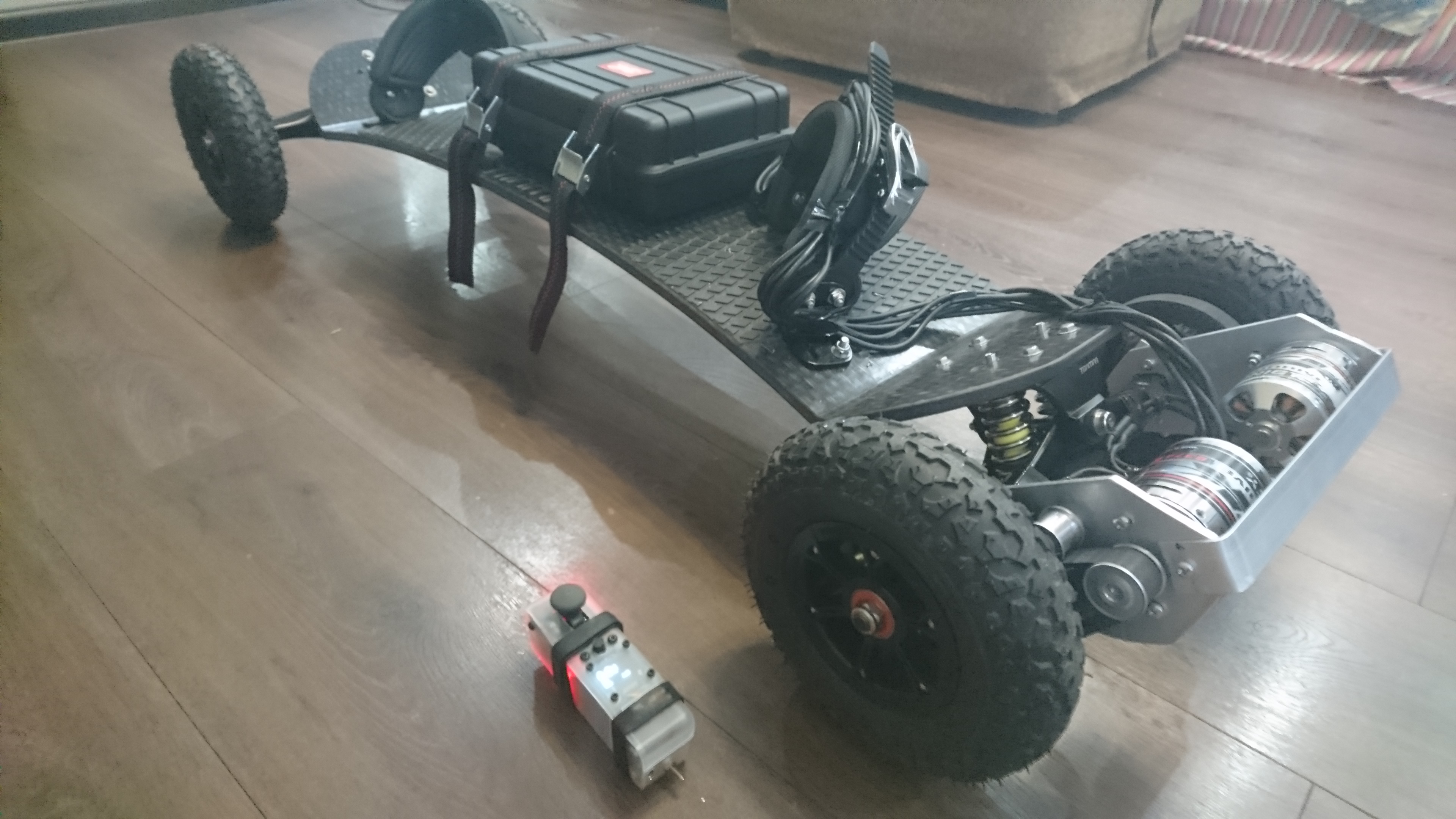 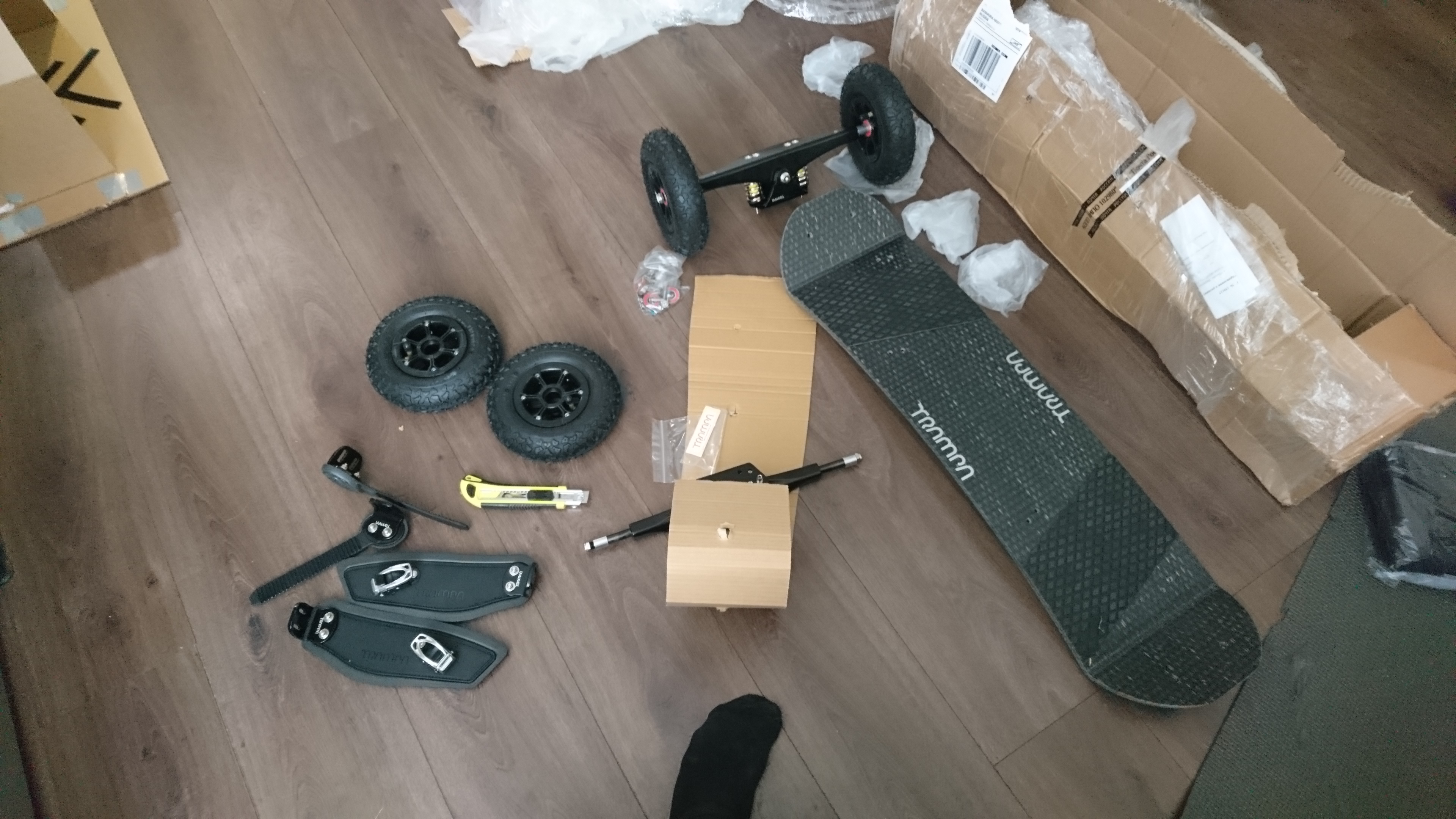 The recommended 14 ply seems too stiff, but the heck do i know about mountainboarding. Probably gonna cut the board later to make it more holypro-ish 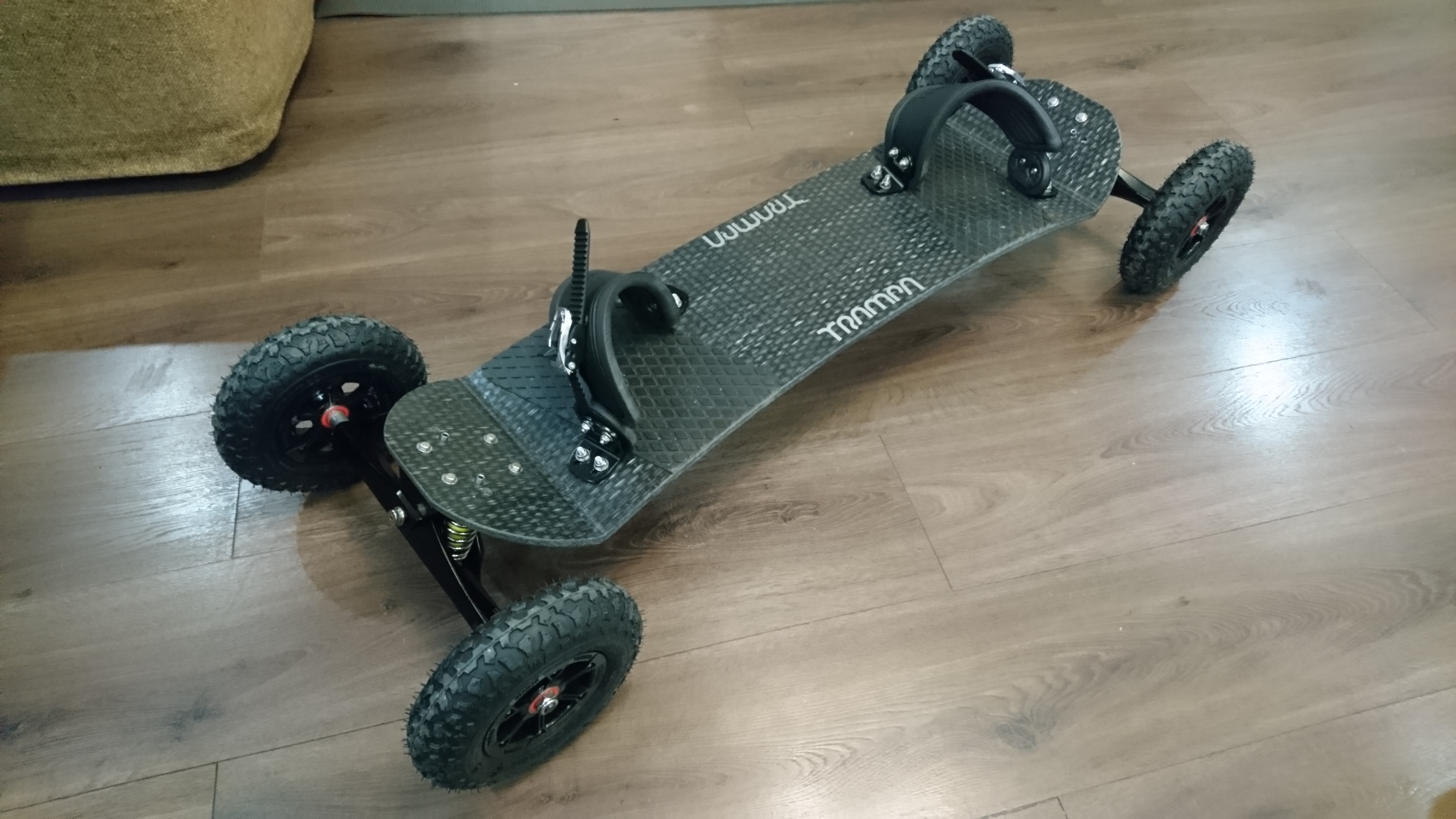 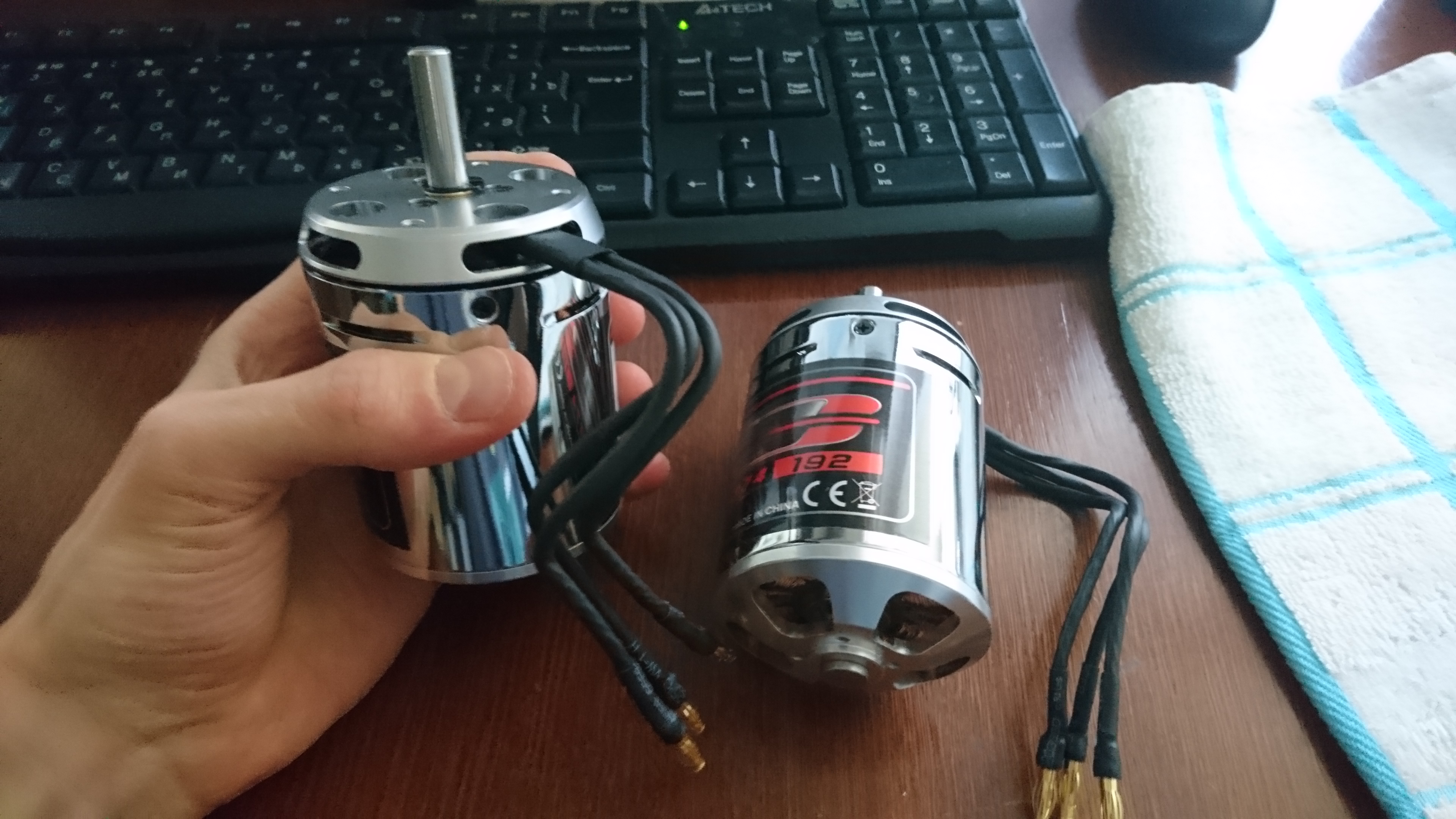 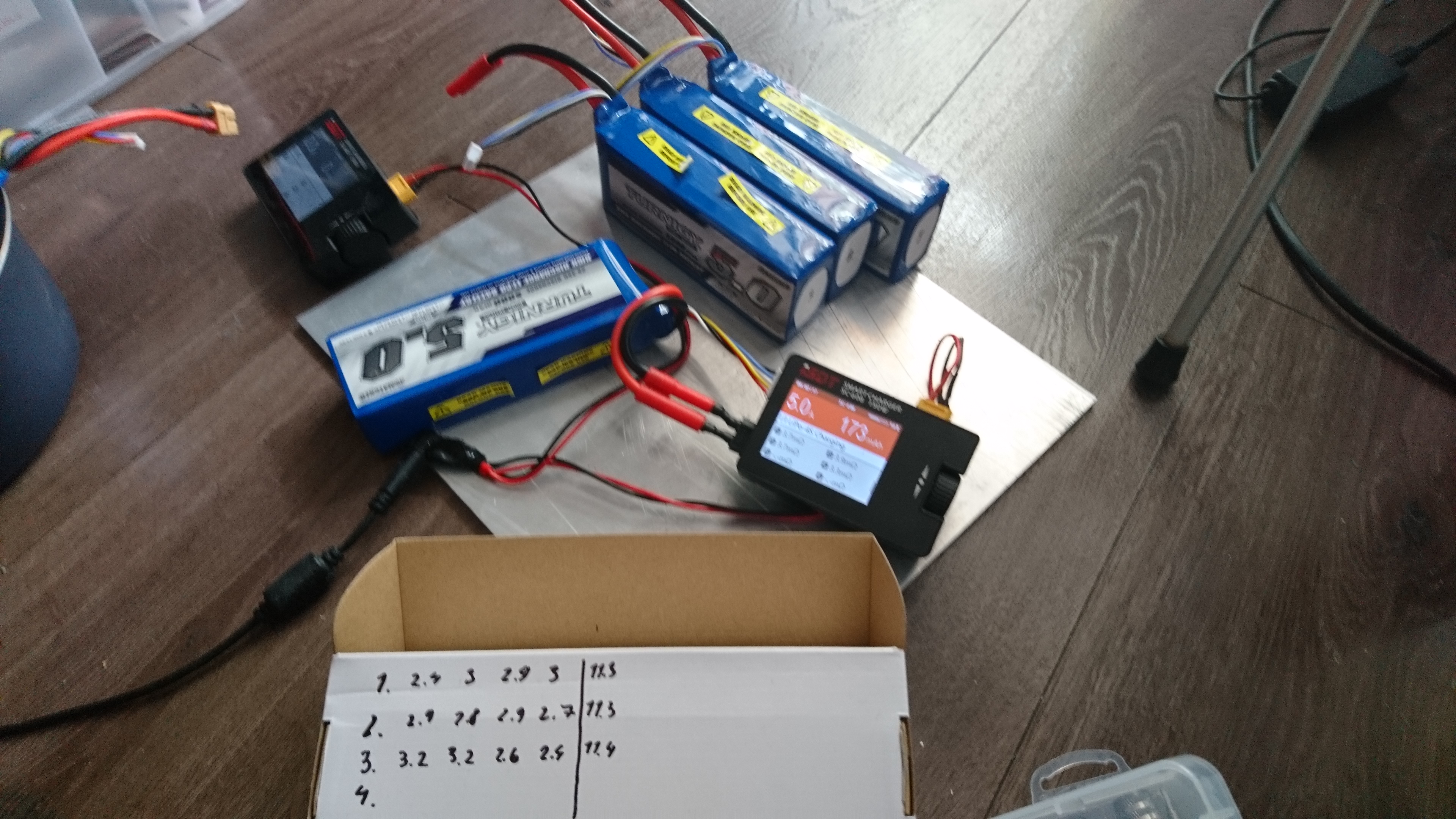 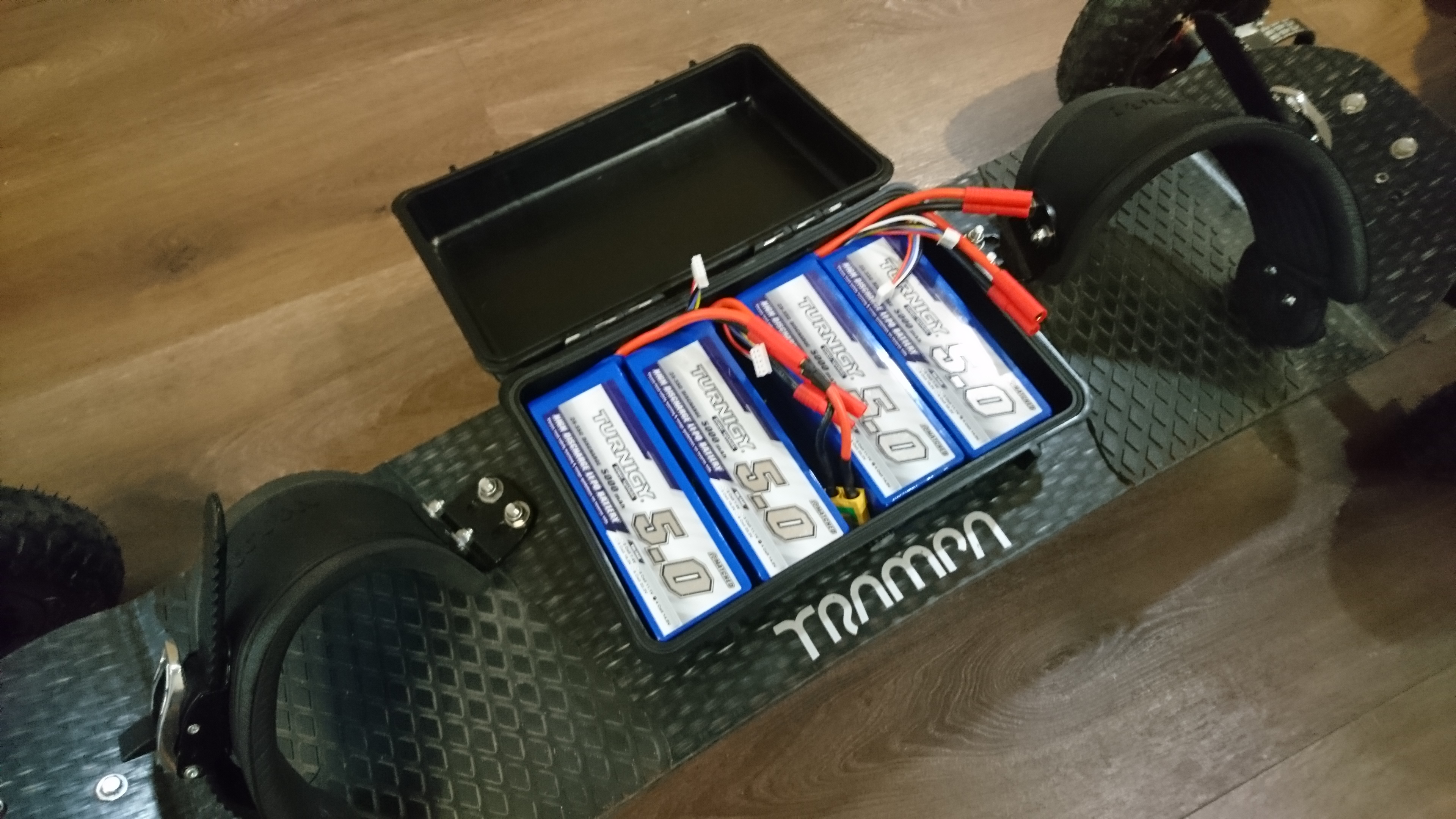 Had to find a drill press to drill these clamps 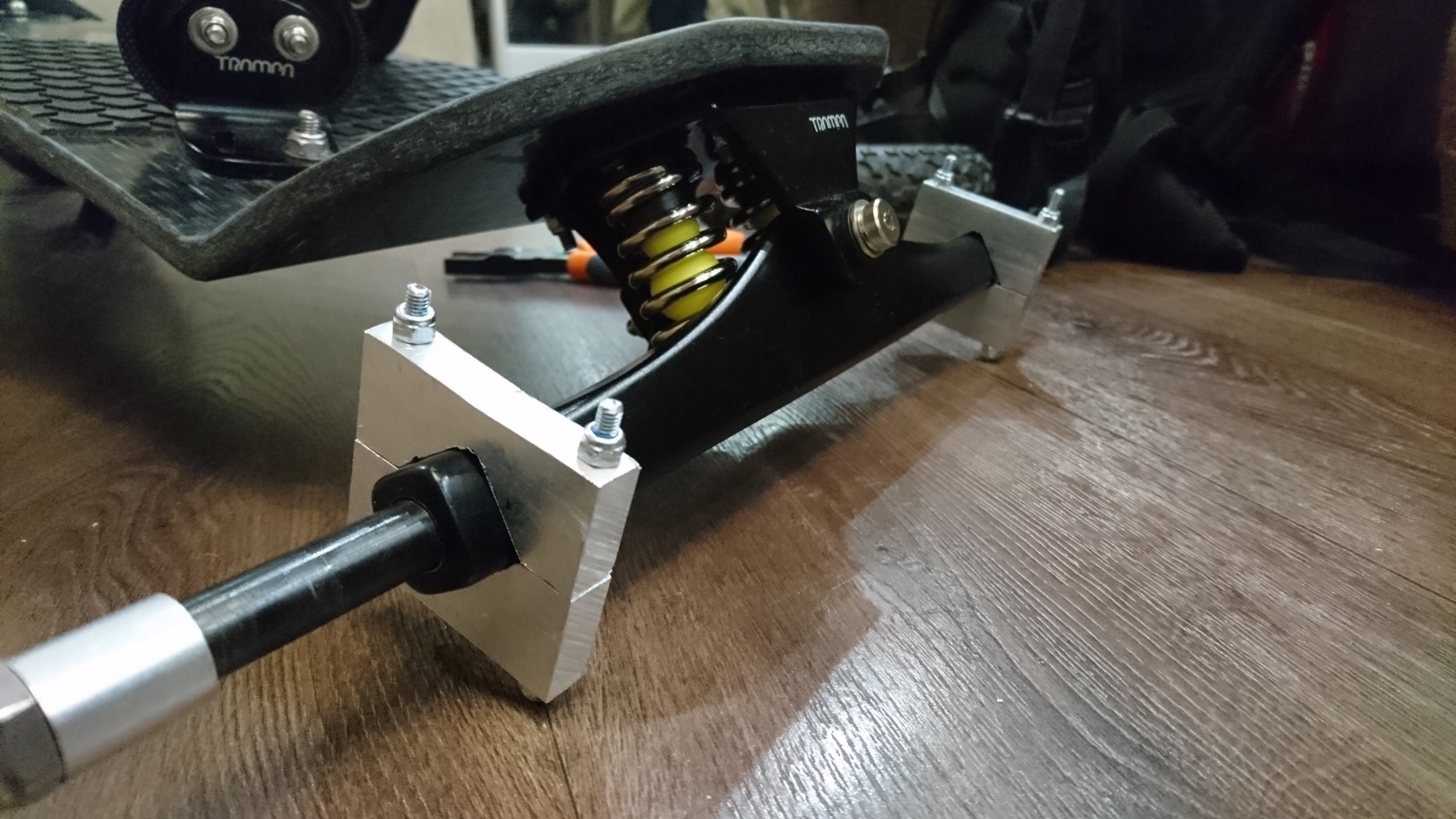 Finding right people to 3d print took some time (still haven’t found where i could print with thicker walls or even 100% fill, these are 25% infill) 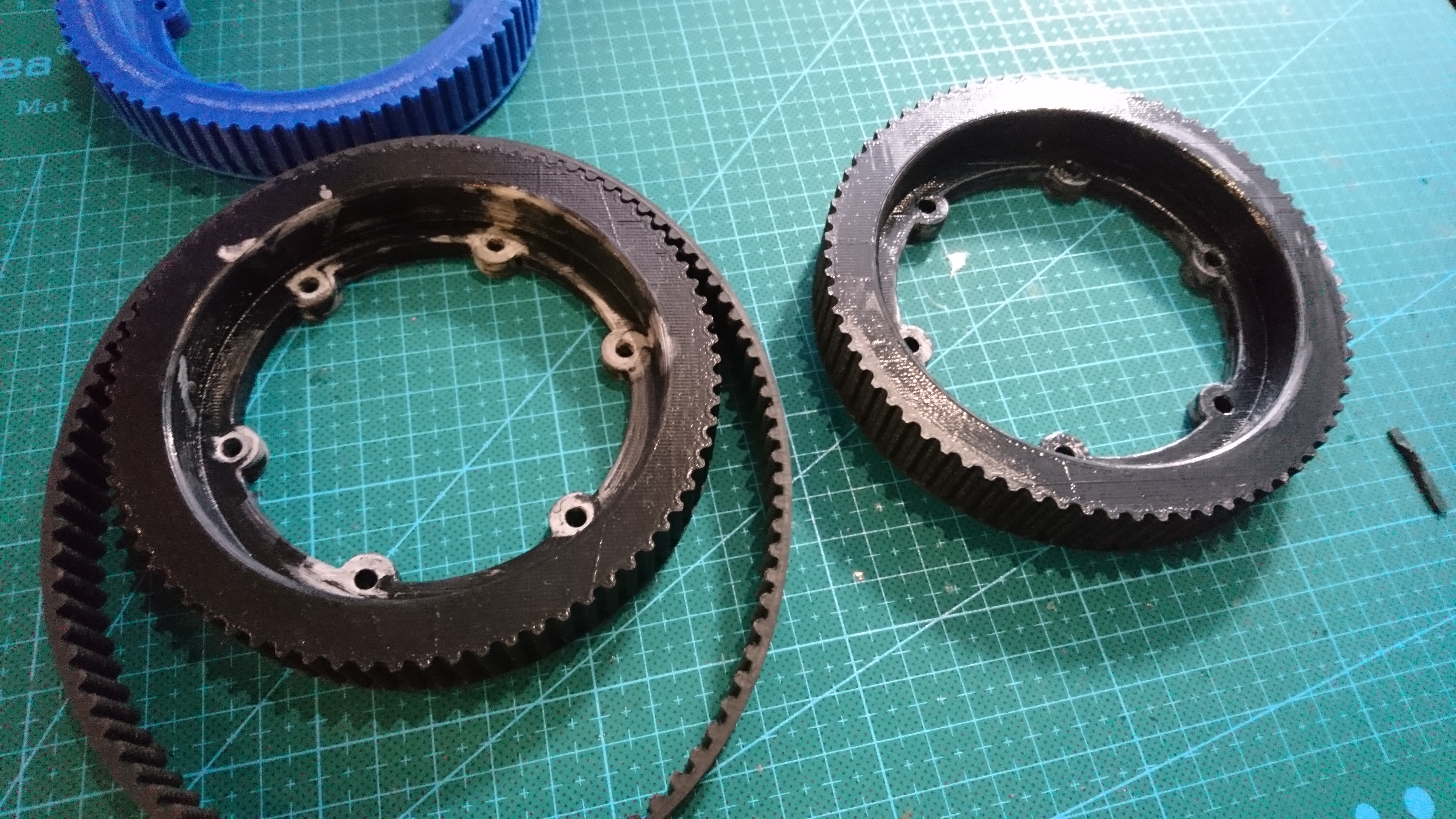 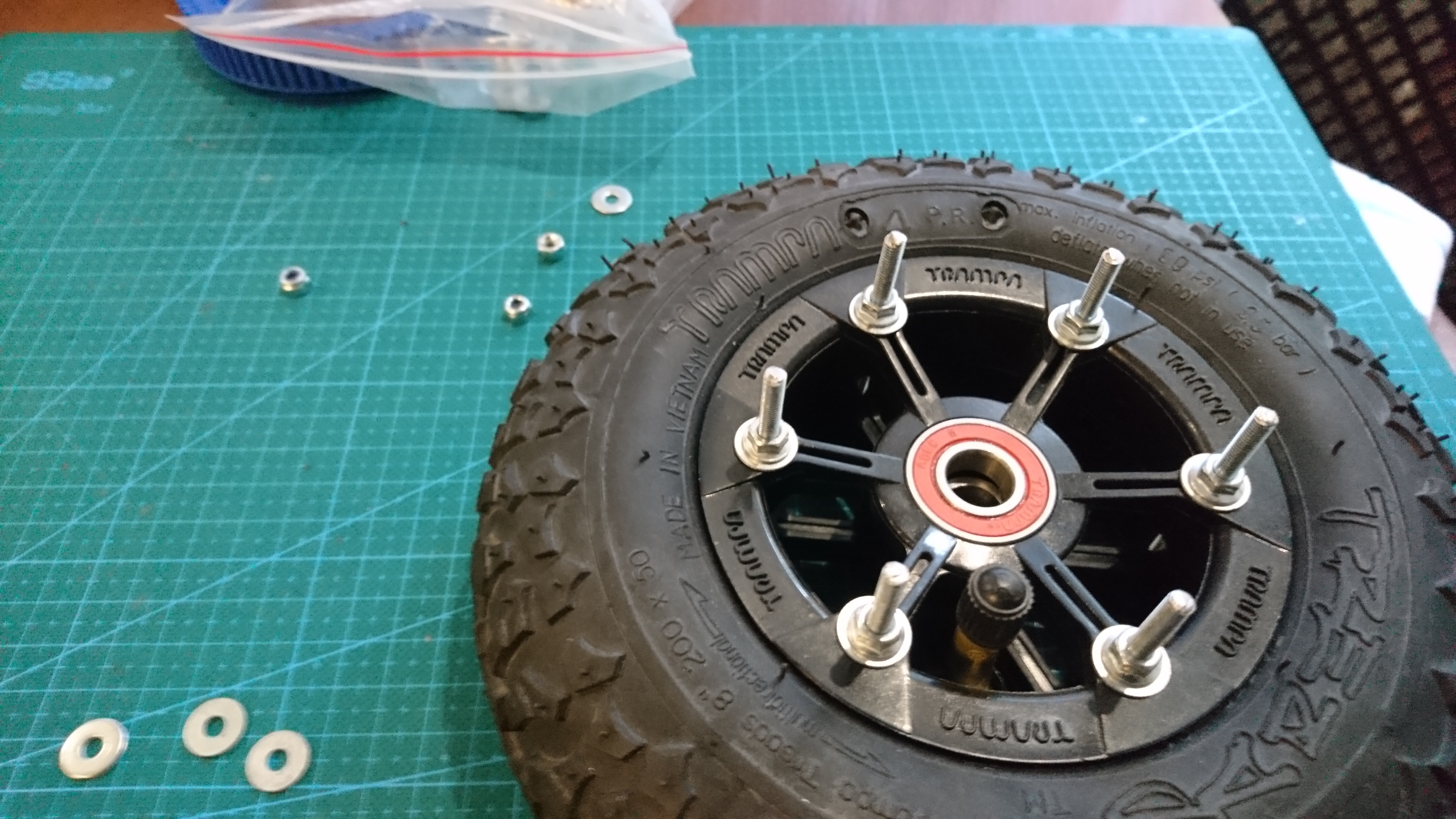 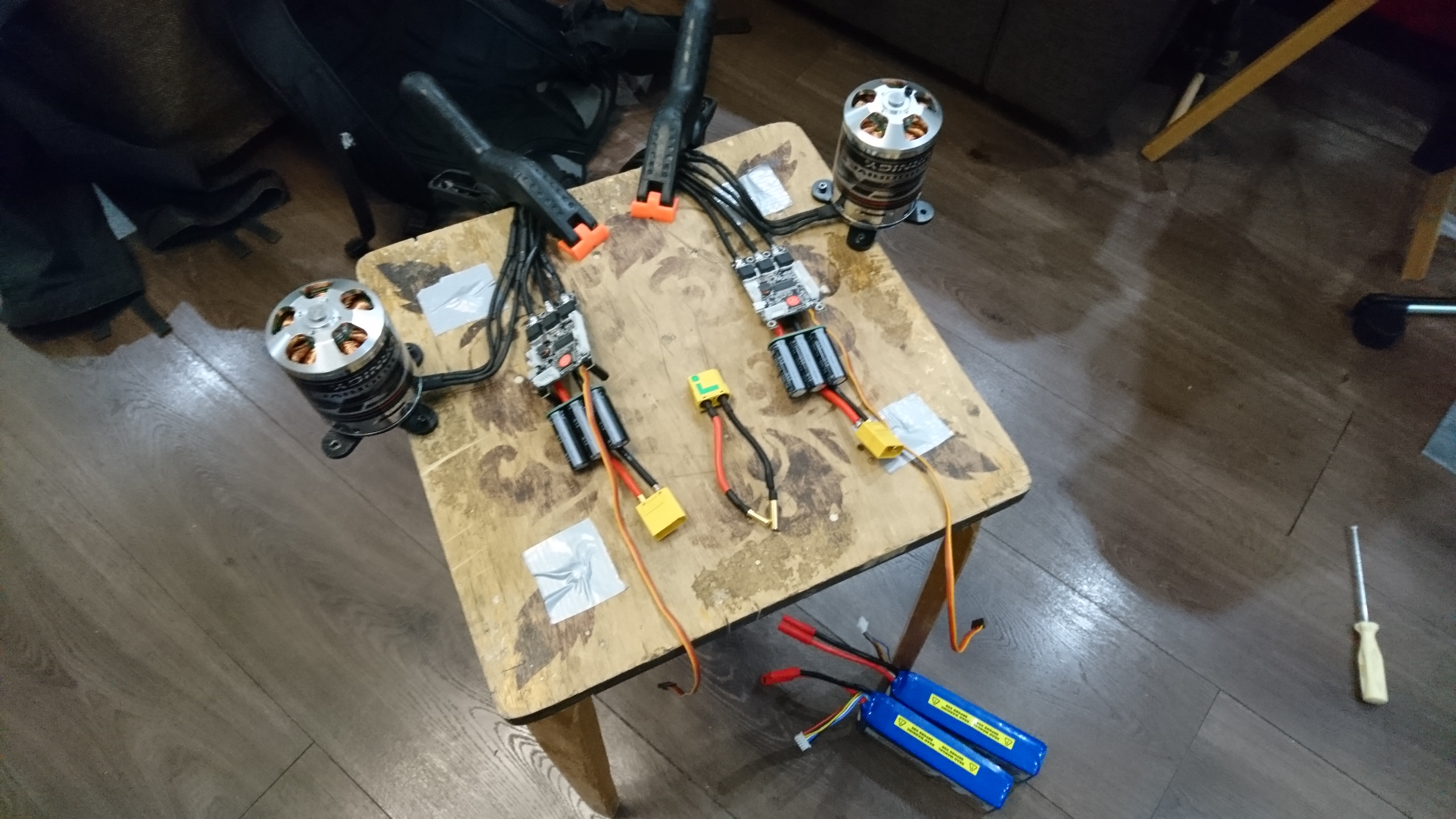 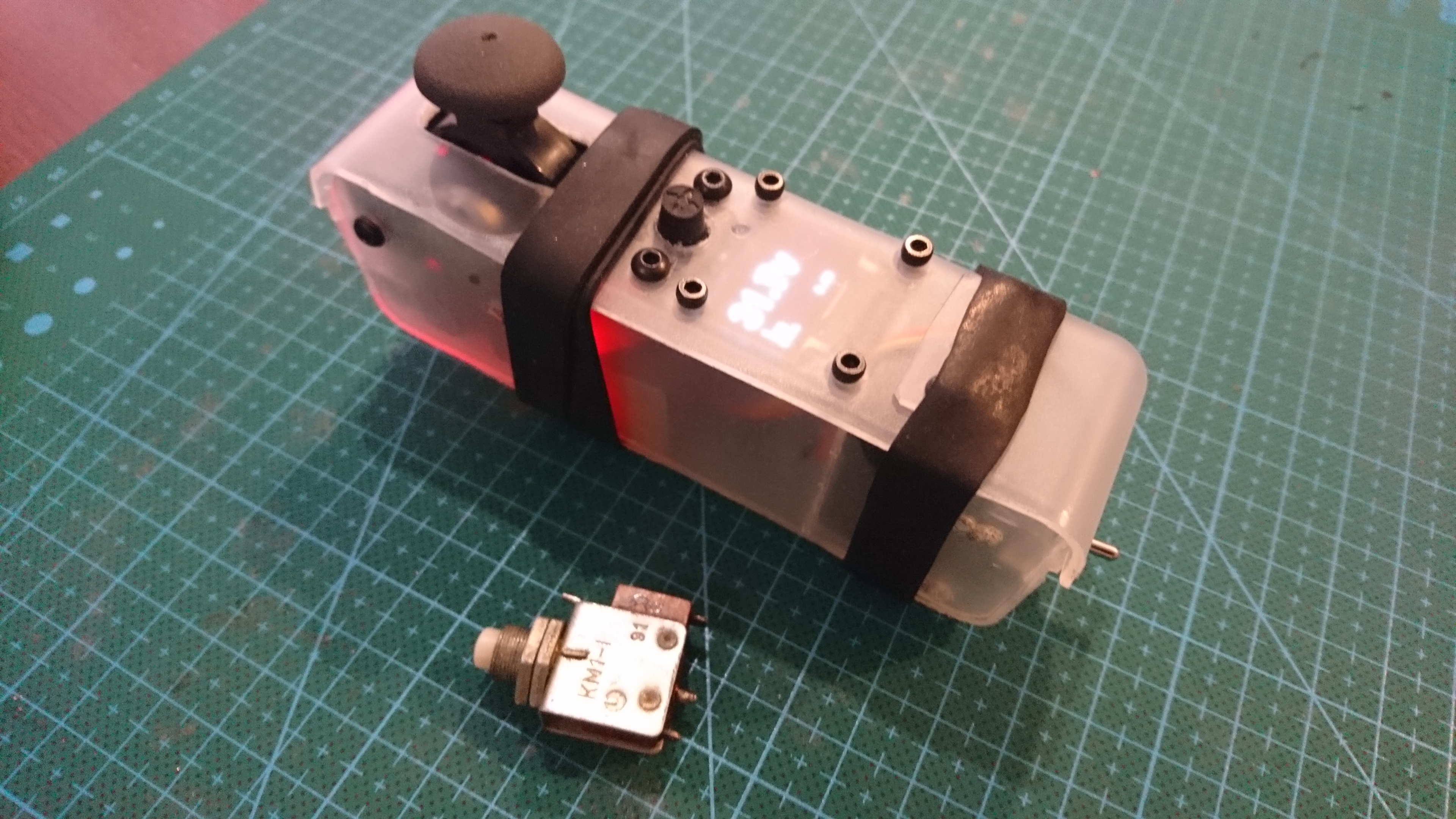 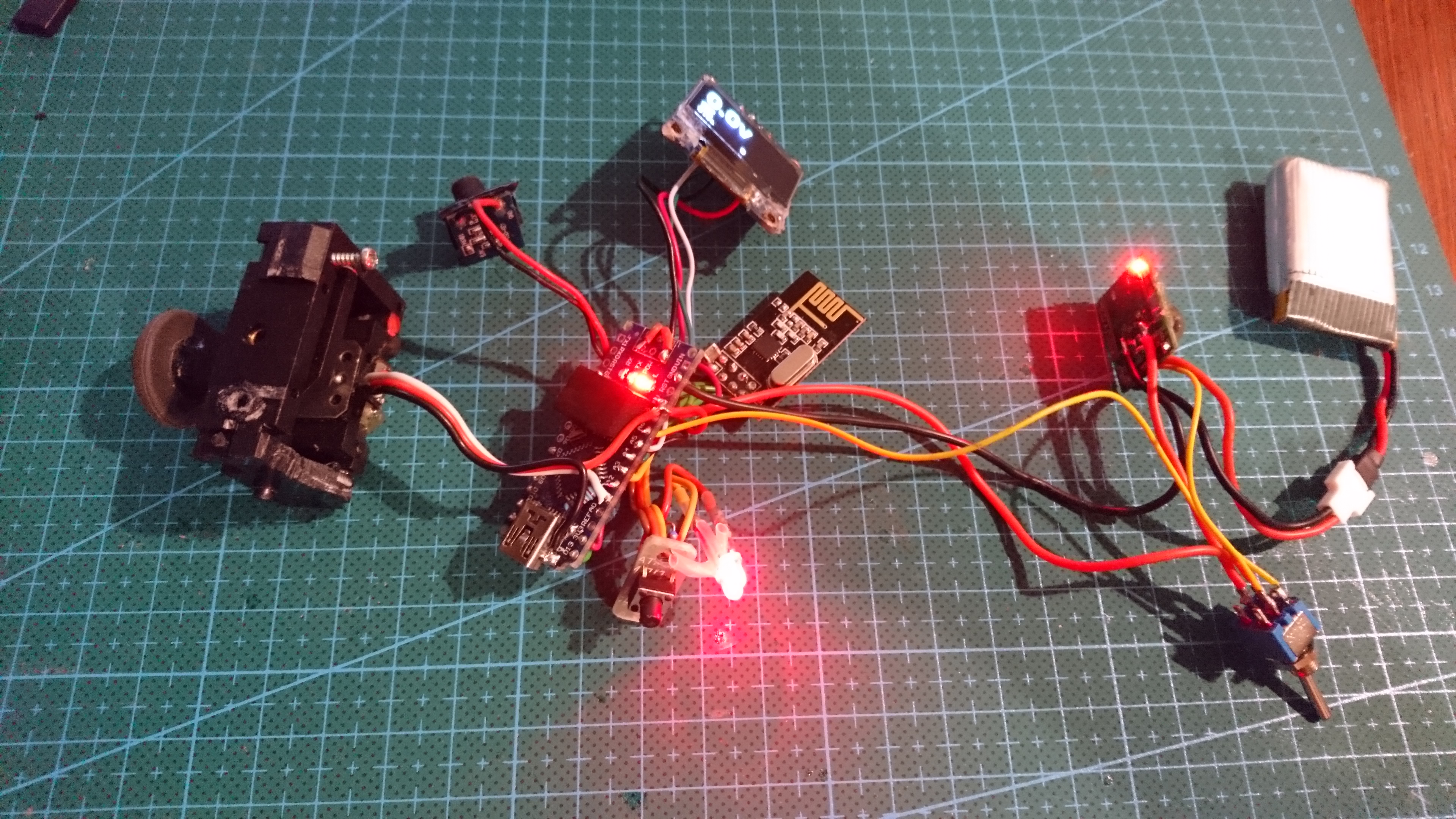 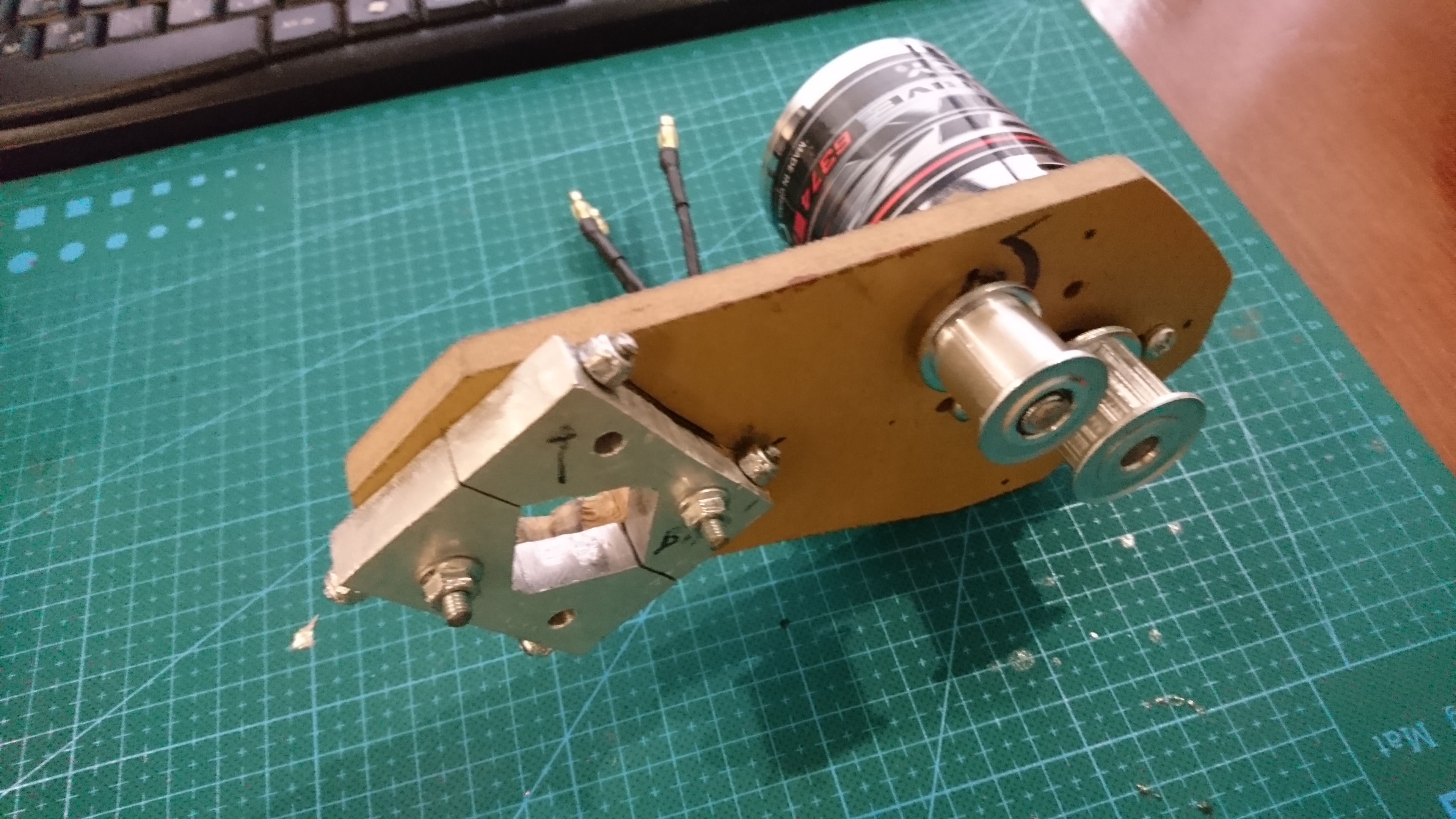 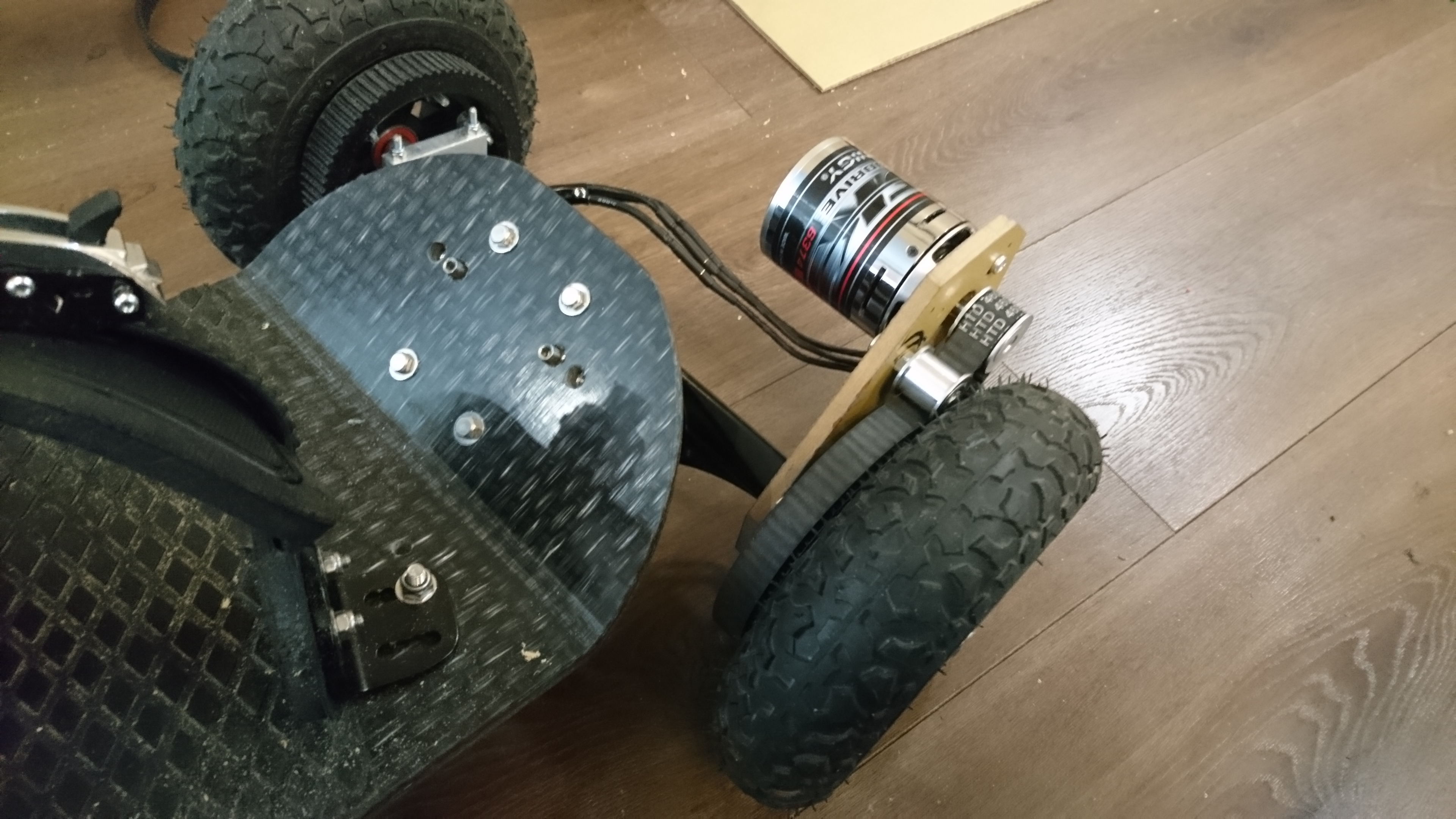 I don’t have access to proper tools, but this chair-saw did the job amazingly well, i’ve cut second mout in about 15 minutes (drilling and aligning took another hour though) 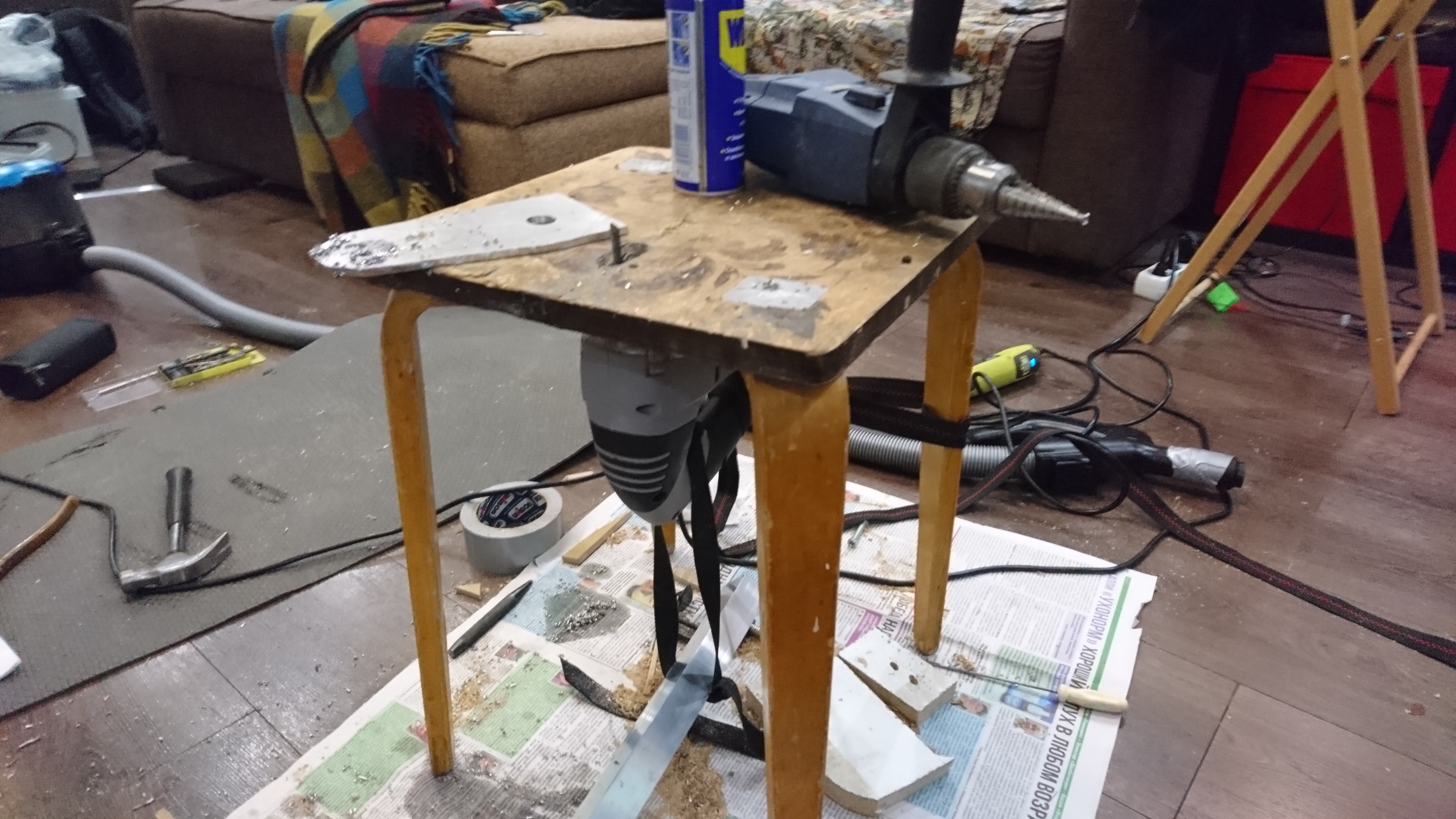 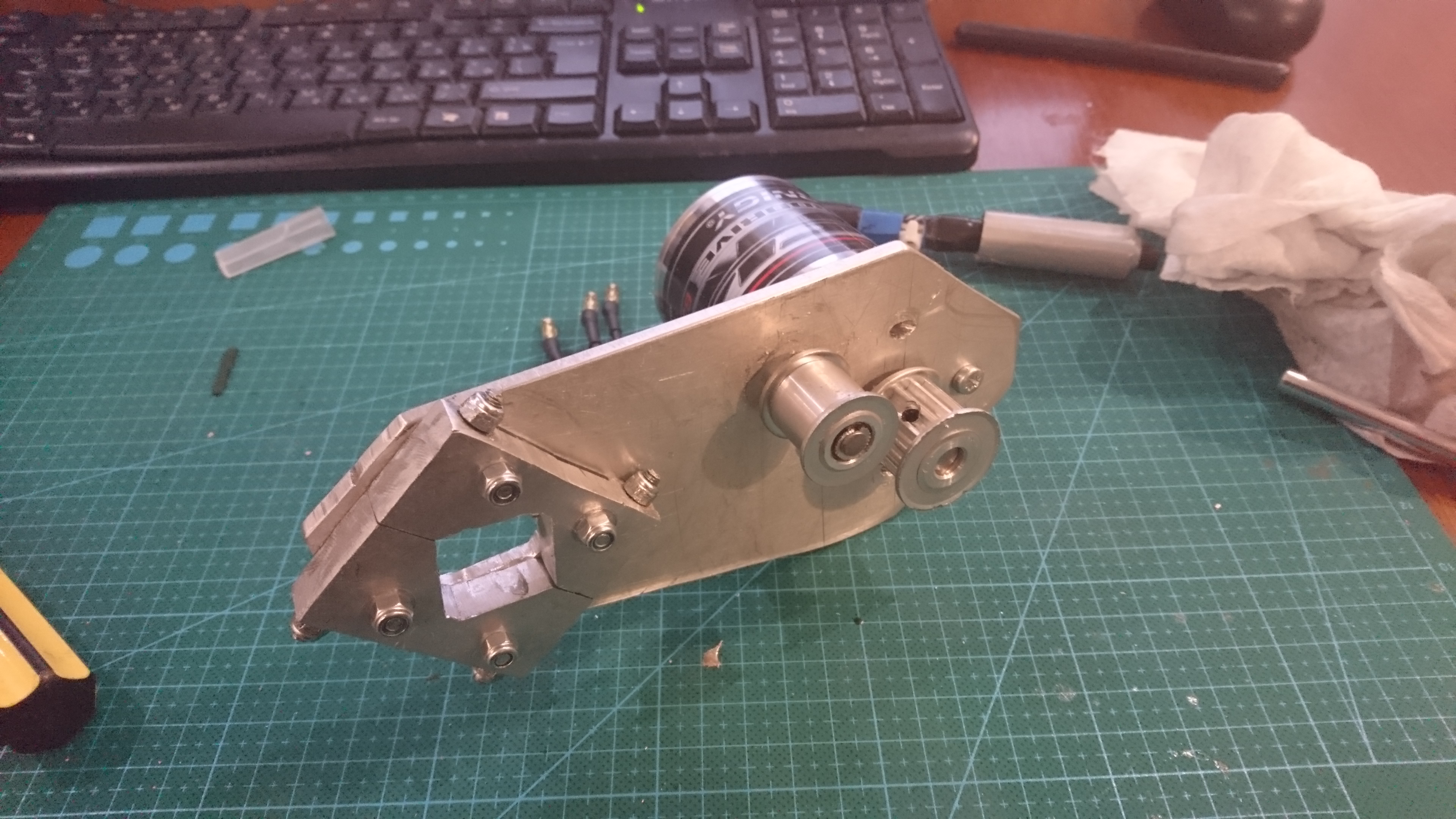 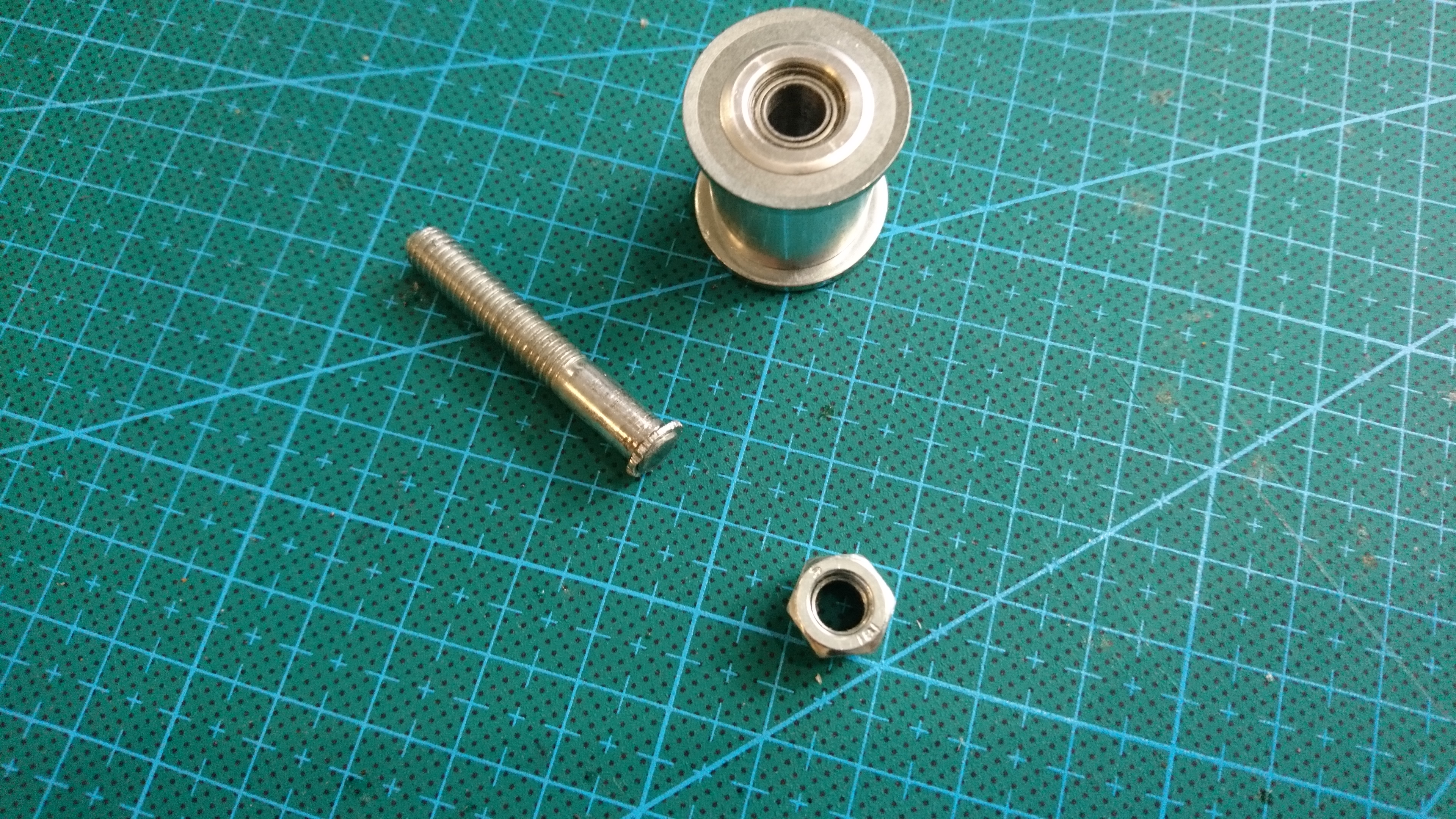 Just did a few runs before the rain started again, woah this thing has some crazy punch. Not sure if i want 12s.

Awesome looking setup, this is basically 2 of my board in one

speaking of how much was the total hardware cost? I think I ended up around $600 (not including things I fried along the way) but was really shooting for the low budget board since I didn’t have a lot to spend on it.

These trampa boards seem pretty sweet but think the board and shocks and whatnot cost more than my whole setup. Agree 12S is overkill, I did that for a while but scaled it back to 10S when I needed to redo my lipo box anyway cause going that fast on a skateboard is unnecessary I need to slow down at intersections anyhow so getting up to top speed usually wasn’t practical (think you can also just scale back the settings in the VESC(s)).

shared mine on github here ( https://github.com/shusain/eskatecontroller ) would be curious to see your code, I actually have one of those OLEDs laying around (made internet controlled frogger on it) and was thinking about putting it in my remote would like to see what you decided to use it to display.

Yep, it was exactly twice your costs.

I live in a small city in Russia, and the roads are pretty bad around here, i can ride my normal longboard only in the city center. I’ve been wanting to make some kind of portable electric transport for a long time, and this year i’ve discovered mountainboards, that combine all the qualities i wanted.

My code is almost the same :), I’ll post the code later, for now the OLED only displays voltage, amps and speed. I want to add menu pages with distance, amp hours, and so on, cause you can only read one value while riding anyway. I’ve also wired the 5 position joystick from camera osd http://surveilzone.com/OSD-Cable-For-HS1177-Camera-g-1816 i make quadcopters so i’ve got quite a few of these lying around.

Awesome!! also into quadcopter builds too though haven’t gotten out to fly enough this summer. This is my first electric build, but great that people like you and others shared experiences and build lists like this on the forum really helps out the noobs like myself find our way around. Good deal on the motor mounts too, everything else looks around about what I’d expect, what I paid times 2, for 2 of them

and trampa board isn’t quite as much as I expected. Curious what kind of range you’ll get out of that beast, I can go 12 miles then my 5Ah 10S battery bank is pretty drained (80-90% or so)? Edited I wrote 10Ah bad habit of adding everything up, they are in series 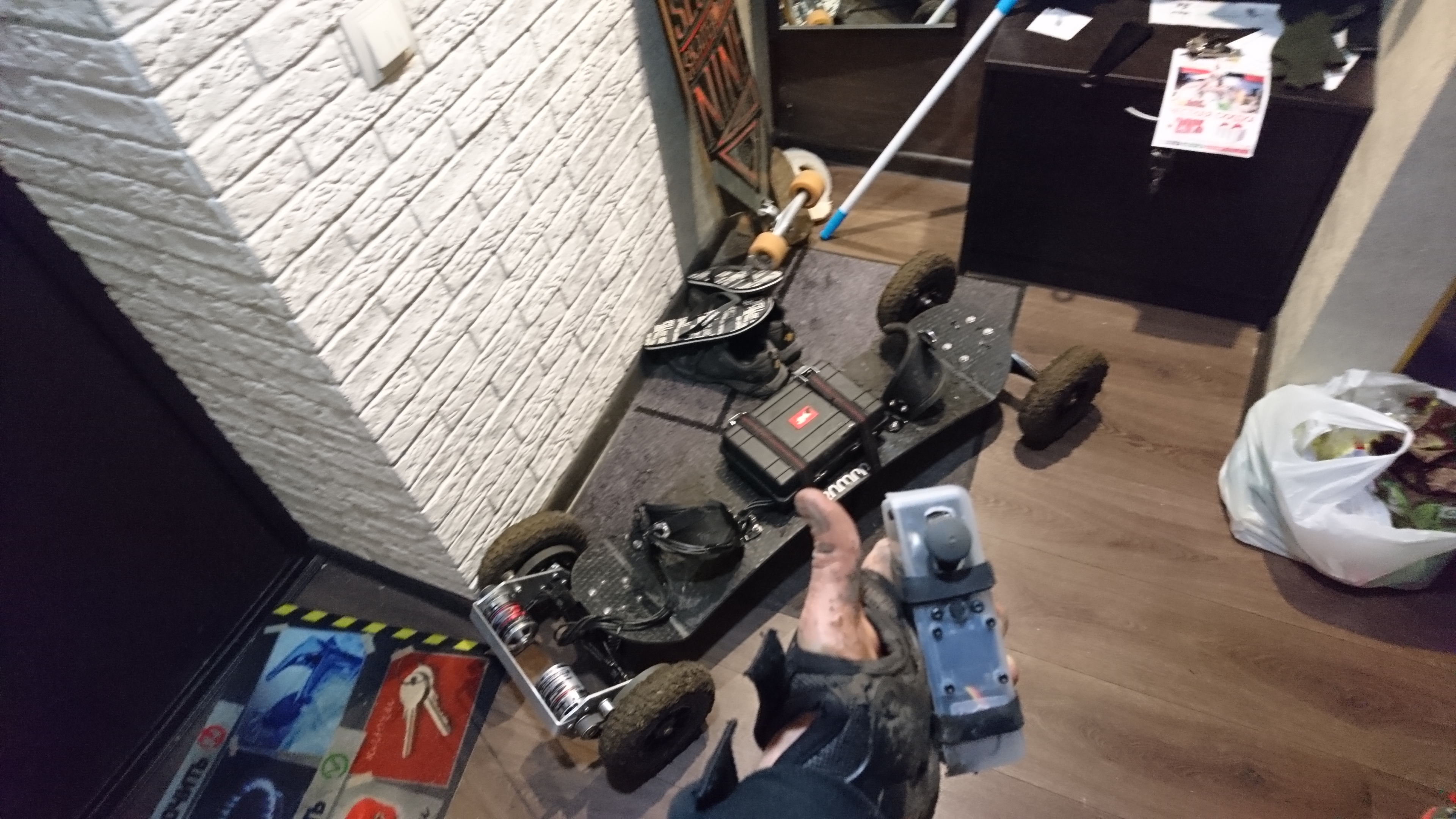 I’m covered in dirt, i love how this thing drifts on gravel, acceleration is crazy. Used half the battery, super fun. I had some minor issues with motor connectors disconnecting at one point, and motor pulleys get clogged with dirt. Also really need a wrist strap on the controller Also cooling

@vap What is the range and the top speed?

Don’t know yet, i’m not gonna go far or fast until i test everything. The theoretical top speed on fully charged 8s is 45 km/h. 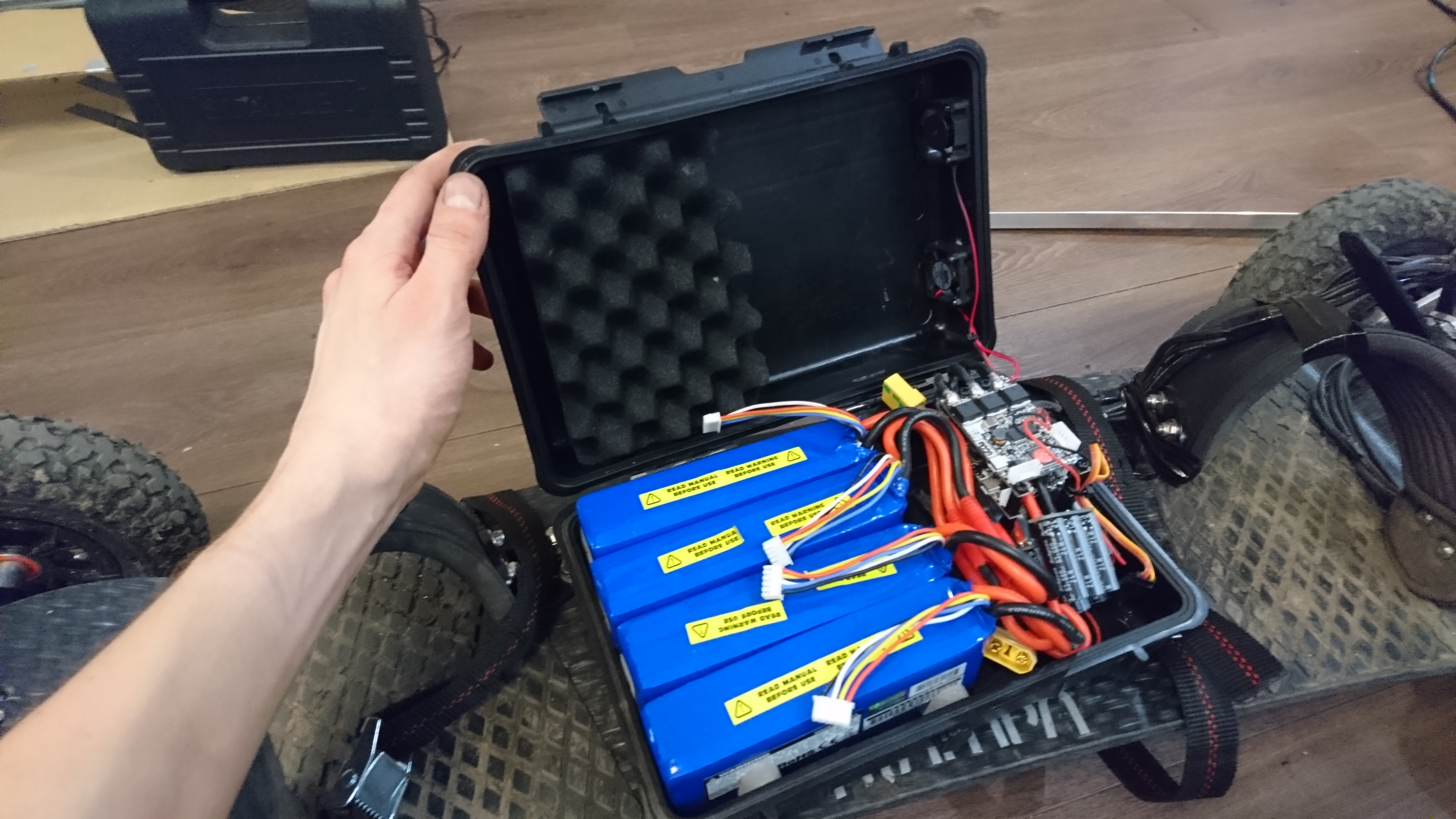 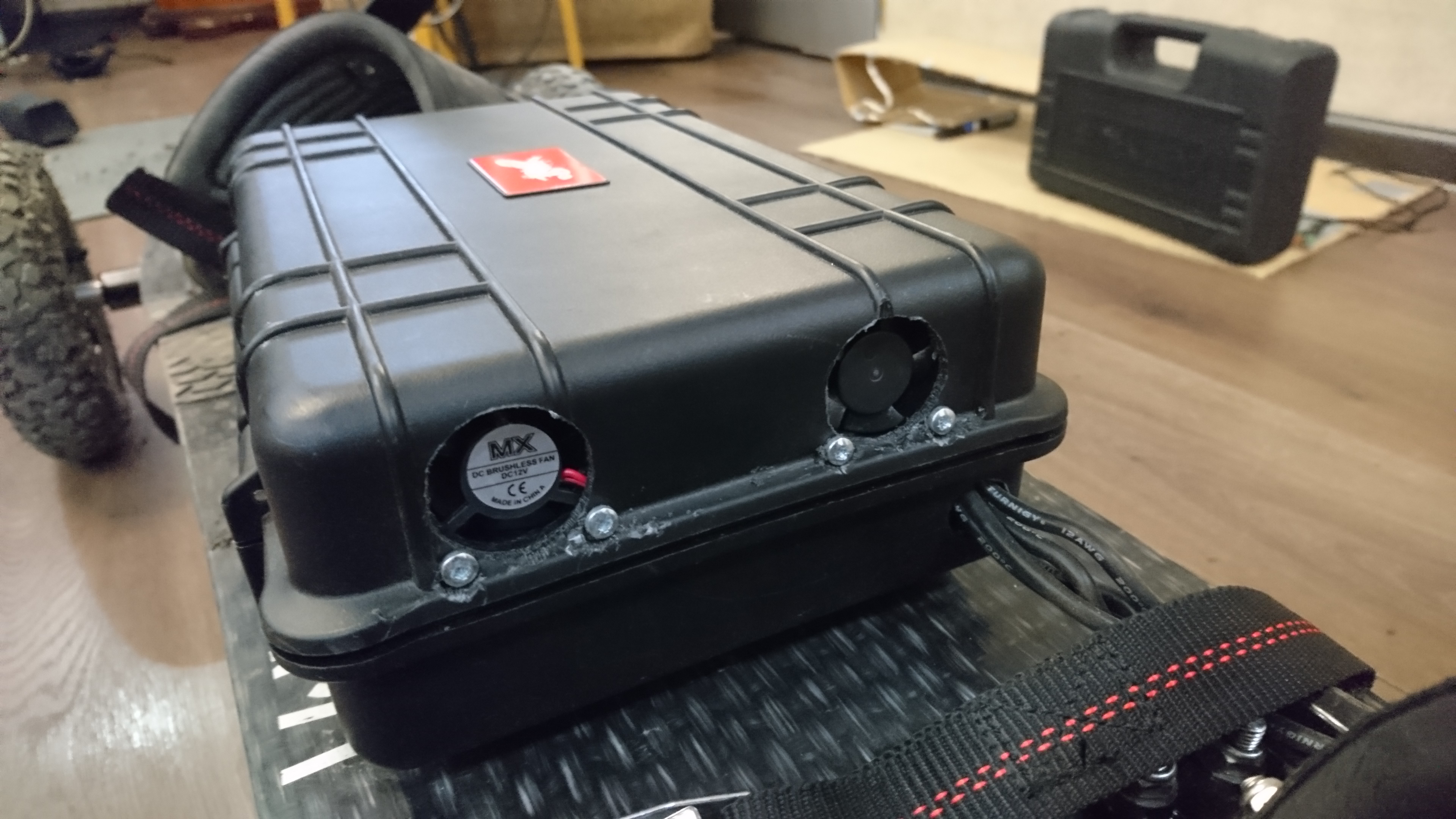 Tuned the truck stiffness, i love how it feels now, this thing rolls over everything, and bindings give so much control. Noticed after the ride one of the clamps started slipping, gotta add some aluminium strips connecting 2 clamps.

This is a great build! I really want a trampa, but can’t justify the cost at the moment. I might just try slapping some all terrain tires on my current (normal) eboard until then. Yeah, I’m surprised those 3d printed gears/pulleys put up to that kind of stress at 25% infill! Even at 100% infill, some folks say metal’s the only way to go. Your build proves otherwise I guess.

I’m curious how long the pulleys would last, couple of spares are already in transit. Probably i’m just going easy on the throttle for now, and i weigh 63kg at the moment. I’d imagine someone who’s 90-100kg needs a lot more torque.

you fit battery and vesc in a same box? i feel that abit dangerous of it. anyway, your build is look awesome with DIY mounting and remote~~

Hmm, haven’t thought about that, can make some kind of fire retardant wall later.

Here’s some video, still figuring out how to film this. 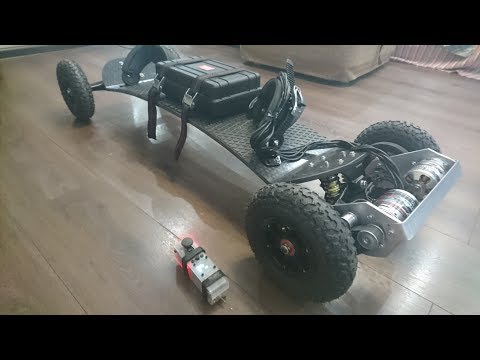 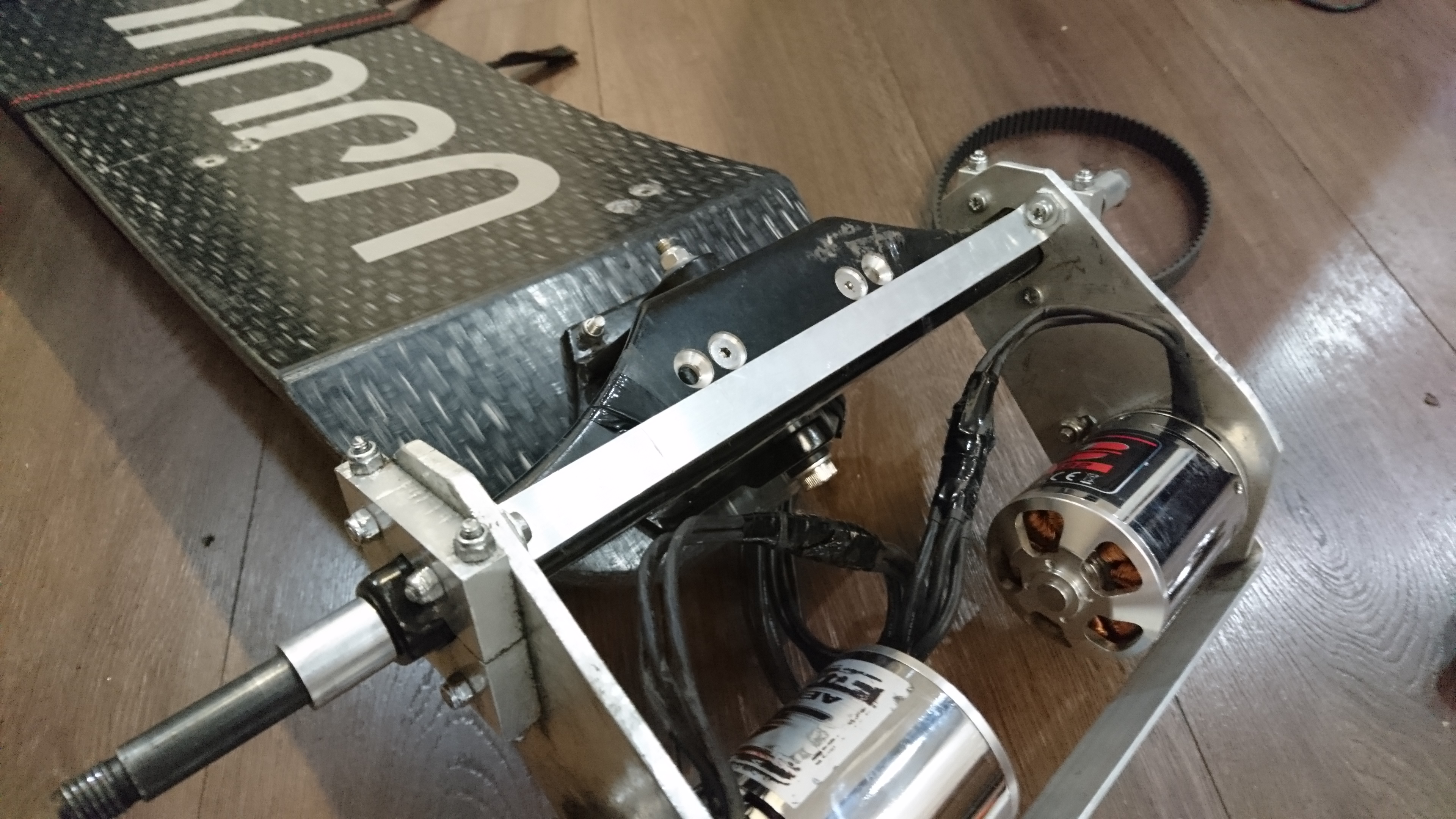 I’m thinking of a name for my board. How about “the hyena” Drifting on ground is tons of fun, gotta get padded shorts though. I’m hitting ABS_OVER_CURRENT every time past certain speed, happens only on solid road. So i accelerate, then sudden loss of thrust, and then after a short delay it shoots forward.

Here’s the dump, only 2 of those are from startup on soft ground (justified), the rest happened at high speed.

Pastebin.com is the number one paste tool since 2002. Pastebin is a website where you can store text online for a set period of time.

I’m not sure if “Battery max” and “Absolute max” apply for one VESC or for both. 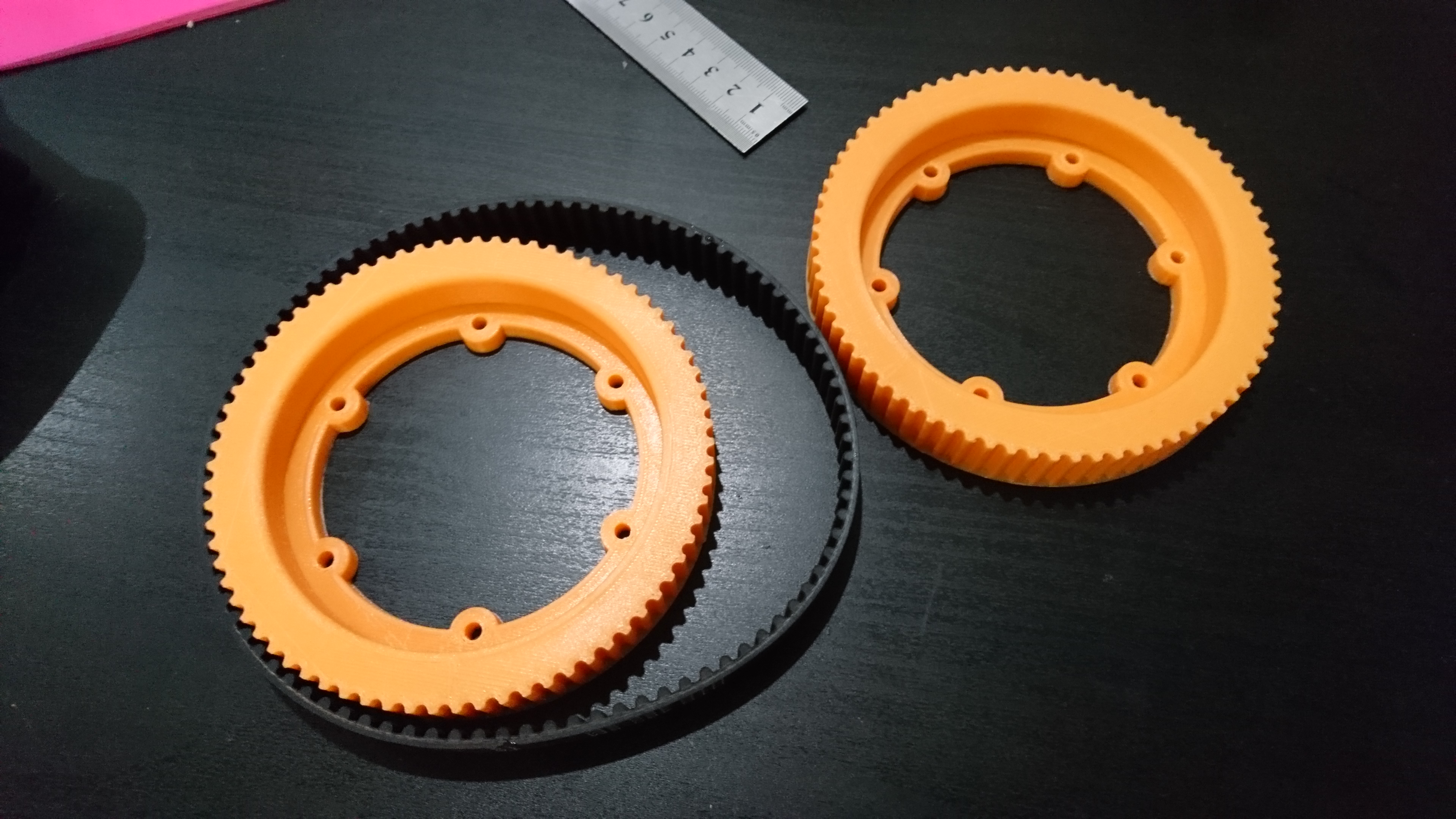 Sadly, i tried 12s and both my vescs exploded. 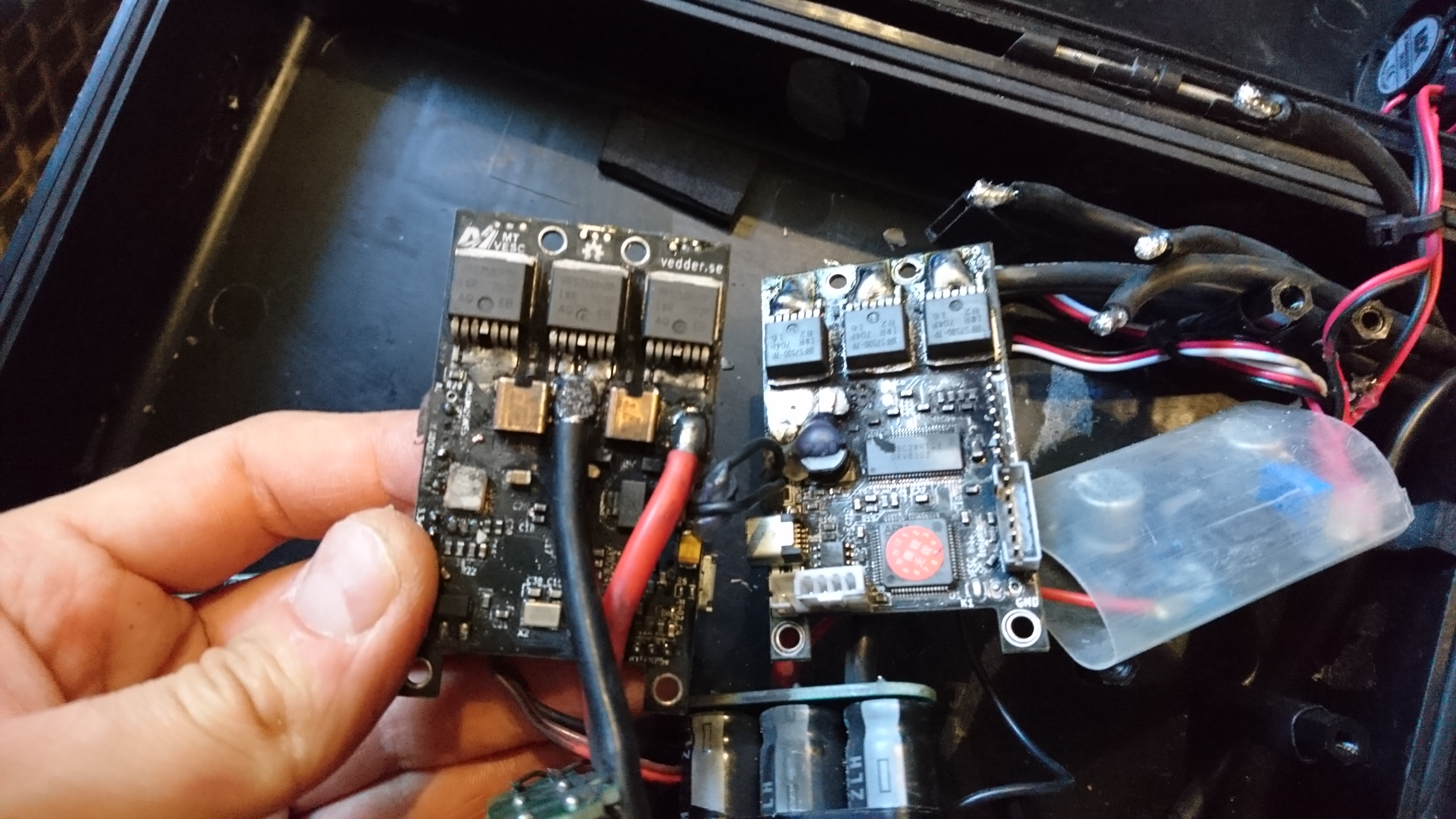 I only got about 10 rides 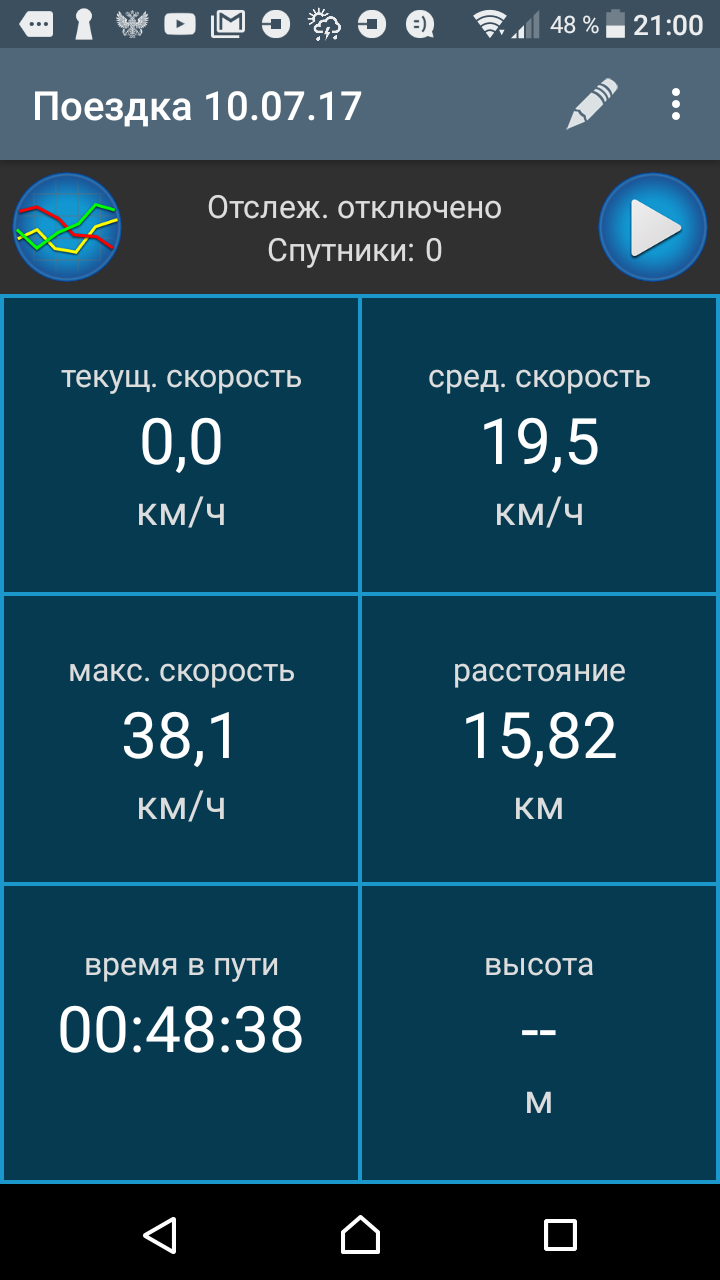 Anyway, that’s $200 totally wasted. Now i need new speed controllers, NOT vescs, and NOT from maytech.

damn, another proof to bang my head with NO-GO with Maytech VESC on MTB. @vap Sorry to hear that fried your VESC.

Is this fried while riding normal terrain or off road with aggressive acceleration?

Standing in place at home.

GOSH~~ something wrong with wiring ? short circuit? if not, too weird to be fried while “standing in place at home”.

I did few test rides on 12s. First they were cutting off on 55amp max current (drv faults), so i lowered it to 40. It got better, no drv faults just overcurrents sometimes, but then 1 vesc just died, showing no LEDs at all. Weirdly it still worked on 8s voltages and lower. So i upped the voltage limit to 55v. Plugged in 12s, it worked, motors spinned. I stood on the board, went couple of meters at home back and forth. Then, when i was standing for a couple of seconds in place, it all exploded. I think only one vesc exploded, causing chain reaction.

that is so weird fried but still work in 8S. Chain reaction is most scary. cause two Vesc dead instant. There is lucky din hurt yourself.

What is your next plan?

What is your next plan?