This is my second proper build, in short it features:

Now this build has become my main one. I have this build already ( The MKV #1 http://www.electric-skateboard.builders/t/the-mkv-1-esk8-de-6374-vesc-koston-deck-lipo-6s-5a-psychotillers-enclosure/2298/21 - the MKV #0 has been “decommissioned” ) but I wanted to try a new deck shape, I felt that when I switched to 97mm I was too far away from the ground, that’s why I bought this deck

Deck Being used to the Koston deck, which was super stiff and super stable at high speed (which I didn’t reach because of 6S, low gearing + FOC) but a bit too far from the ground, changing to this deck was a blast. Much more manuverable, good for carving, a bit wobbly if you’re not careful at high speeds but definately I prefer this, it’s also lighter but I will probably go with a longer deck and/or a drop-down deck that is not a double drop.

The only problem is that (even if I added some quite thick risers) the (awesome’s @RunPlayBack’s) enclosure gets scratched a bit on some bumps ( sorry Rick!, the good thing is that I’ll probably need to order another one at some point

Circuit + Lipo splitting: I currently have a 8S made from x2 4S in series, I switch on the circuit via the anti-spark loop-key, it’s alright for now until I can get another anti-spark switch. The 4S packs were made from 2 6S packs that had a bad cell on each of them (went to 0V), I tried to do a 10S (5S in series) but one cell kept disconnecting because I couldn’t solder one of the tabs very well. Also I didn’t need all that speed (cuz of 97mm wheels), with 8S I feel a bit more torque too which is not bad. Thanks @Jinra for the goo-gone tip, that worked very well to unglue the lipos. The lipos are connected also in parallel to allow charging them at once, It’s a bit time consuming to open the enclosure, disconnect the esc and connect all the charging cables manually but as I’m going to do a Li-ion battery pack soon (next week hopefully) this solution is alright for now.

Video Here’s the HQ version of it: http://mkv-video.s3.amazonaws.com/esk8/mkvbuild2-thames-path-2.mp4 (I have still to figure out why youtube is compressing my vids a bit…) I tried to do a video from a third person view but my stick is not long enough ( lol

), so It’s a bit too close to my back, also it seems a bit strange because it looks like I’m going straight instead of sideways, whatever… ^^. Also I didn’t orient the camera properly, when I checked on the viewfinder it was ok but then I reset the gimbal because a guy asked some questions and it wasn’t pointing down anymore, you can barely see the board unfortunately…

This is the non sped up / no-titles version - https://www.youtube.com/watch?v=3LrWTLx3iW8 Unfortunately on that river path I couldn’t hit full throttle. I will do another video of hitting full throttle on good asphalt, for now max speed is 36km/h (~22mph) and I’m pretty happy with it. I’ll try to modify the other build to make it a 10S because I feel more comfortable going high speed with that deck than this one.

I will post more videos soon and a web config tool to share VESC settings, exported via the XML Export featur ( If you were wondering why I put a dead link on the video

Other things to note is that I’m back with the old controller and I enjoy it more than the compact one (doesn’t loose signal that much + the trigger is more accurate than the thumb control). Also I’m not using the 6374 sensored which is still on the other build and I quite enjoyed that, probably I’ll move it to this build at some point…

edit: ouch in the video I put drop trough in the titles instead of drop-down … That looks so dope with 97mm wheels and the deck drop. How much is the drop height?

You said board carves good, didn’t see any video of carving. Can you get some?

@makevoid Nice work! I’ve got almost the same deck with the same red 97mm wheels. It’s definitely still a lowrider with those big wheels though. I had never ridden a drop down deck before, and it’s surprisingly carvy and really maneuverable for being so long. I’m running pretty tall 20/40 gearing on 6s, 245kv, and it gets me moving pretty well. Easily 25mph (41kph)+.

Do you have any clearance issues with the motor mounted inboard like that? It looks really close to the deck. Mines hanging out the back, but I was thinking about mounting it inboard since it looks like it would just barely fit.

I use pretty high risers (~1cm), if it was a little bit longer I think that it would be perfect, also I would like to try one that is not double drop but just single drop at some point It took me ~3hrs to arrive at this point, very easy to solder the cells without overheating thanks to the solder tabs, I think for 16 eur they’re worth it.

with the solder tabs you have only one layer of nickel connecting the batteries - that is not enough for the currents we use in esk8. One nickle strip is usually suitable for ~15A. look at @whitepony - he even adds braid copper wire on top of the nickel strips to make it safe. 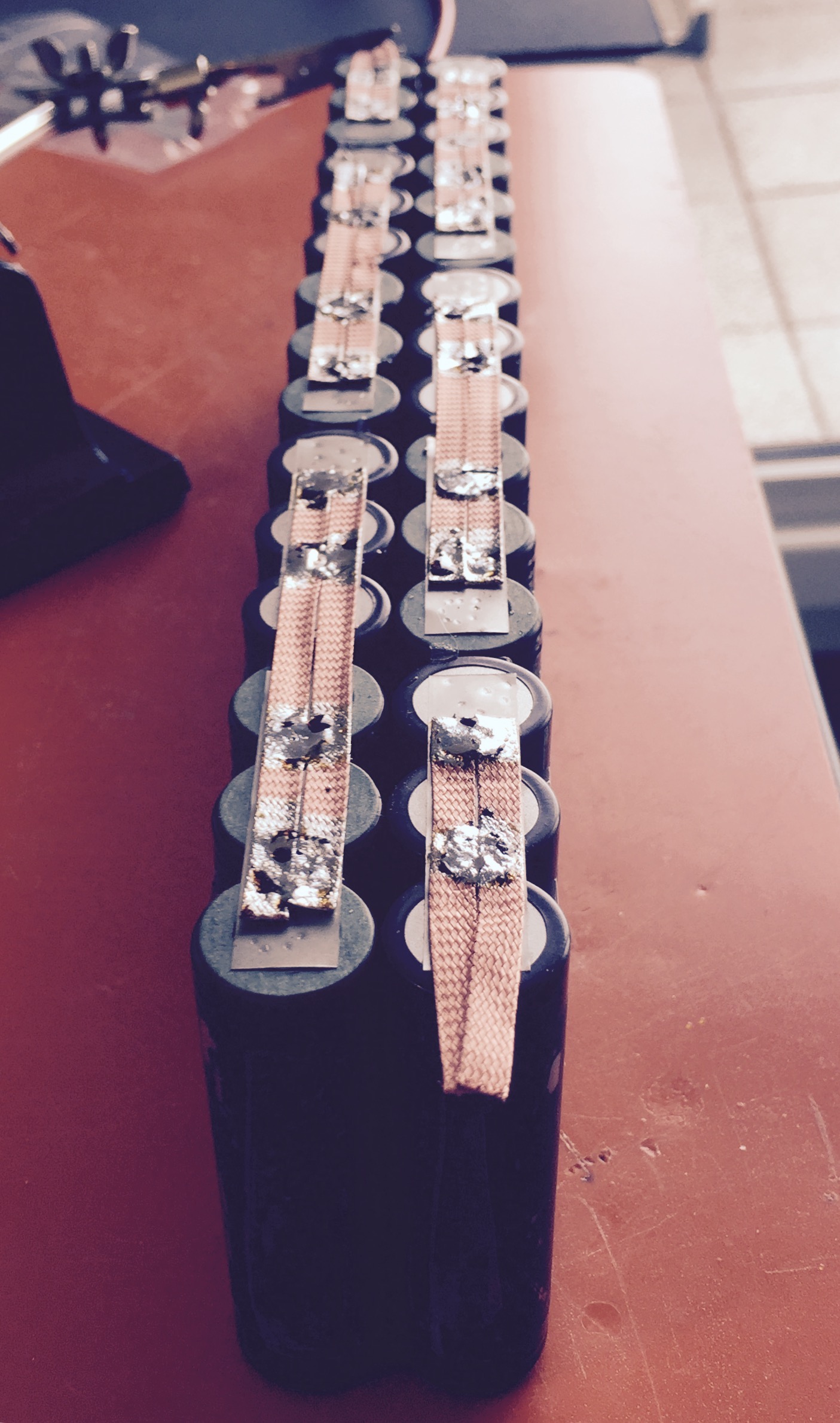 My opinion: This is not safe!

Thanks for the tip, you’re right it will probably overheat and desolder at the tirst ride

I will probably put 12awg wire if I don’t find something better at the local hardware shop! At least for now I can test the bms for charging that is one of my main points were I’m unsure if the solution works or not ^^

update on battery, everything seems well, the BMS (from sunpower) even if it is meant originally for a 10S battery seems to work with my 8S as well

forgot to take the pic after I put the 12awg wire (a bit overkill, probably a wire 4 times smaller would have done the job but that was the only one I had at the moment ^^) 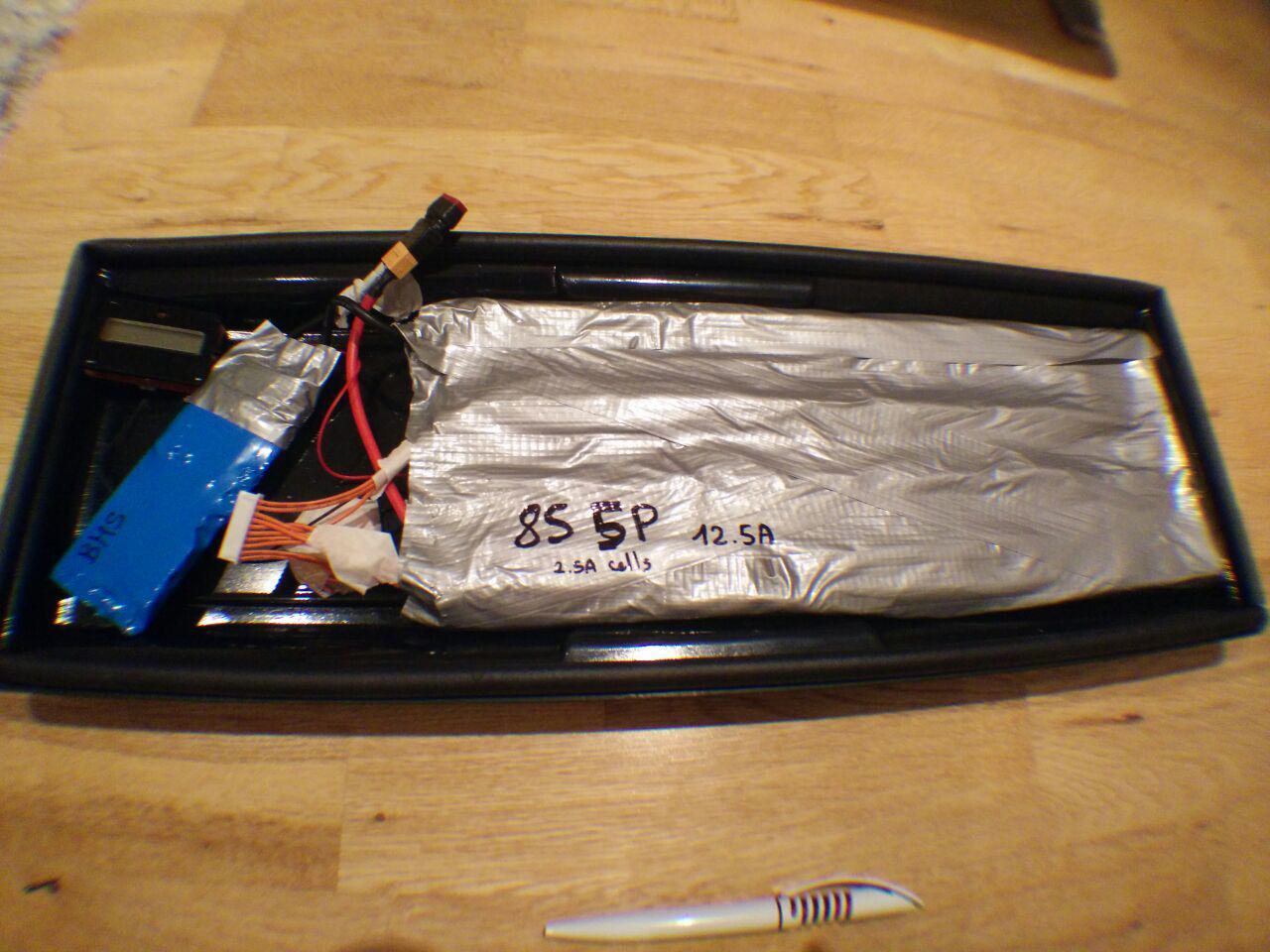 still waiting for the proper charger + shrinkwrap, I am currently charging it at a conservative voltage (~30.8V) with a 6S li-ion charger through a cheap DCDC step-up module - I am looking forward to see if at 80% charge I will have the cell balanced or not, then I’ll need to test the discharge as well

I soldered the batteries placing them into the space cell enclosure and that gave me the right spacing and positioning. Making the packs this way was easy, because of the shape of the enclosure there’s no way they’ll move inside it.

The Li-ion charger arrived, charges with no problem, the 10S BMS works perfectly at 8S, charges and discharges with the correct voltages, I have also a 8S BMS now but I’ll probably keep the 10S as it’s already wired. 8S6P gives me zero headeaches in charging the board, finally no need to open enclosure, remove the series connection, connect the lipos in parallel and charge. Now I can finally charge by plugging in a laptop style charger, the 5A version is a bit bulky and also 1kg, I couldn’t find a 3/4A quick charger that weighs less than a kilo (basically to stop at a starbucks and charge from ~40 to ~80% in ~1h instead of ~2h, cause to charge overnight my current 2A charger is ok, but also a charger that weighs 1.1kg is hard to carry ).

Here’s the new video showing the enclosure at the end:

max range 15 miles (not riding conservatively but also not very aggressively, from 100% to 25% charge)

If you’re running standard 18650s in 6p, why do you have your battery max at 25? This pack should output 120a continuous, but 80A comfortably.

You are right, there was a bug in the config web app that caused the app not to parse the values correctly (on ff or mobile webkit) and that picked the default value of 25 - well spotted, it should be fixed now

I would like to switch the enertion 6372/6374 motor with the sensored 6374 (esk8.de) but It’s currently stuck (a lot of green threadlock and not enough space to grab the pulley with my current battery terminal puller) on my other enertion mount, I would like to remove the pulley without breaking the carbon fiber piece of the mount but I don’t have a battery terminal / motor pulley remover, can somebody suggest one that is able to grab the pulley in 1-2mm of space or another method I could try to remove it, should I try to grind the pulley with an angle grinder? I tried to heat the pulley up but it’s not coming out. Thanks in advance! edit: a pic from inside pretty much everything crammed in a tiny space, added heatsinks on the VESC, they help, probably having an air convection system will definately help too (the simplest is probably an air extractor (small pc fan or a blower fan) into the enclosure near/over the vesc to keep the vesc cool - I think it would help because at 8S (and with me being not conservative on the controller and being ~220lbs) the esc needs to dissipate a lot of heat, if it runs cool you can keep going at a good speed everywhere as long as you have power from your battery - because if the esc overheats it will cut power to prevent that, and you’ll have less acceleration/torque/speed at the end

@makevoid Did you ever get your pulley off? I’ve found success with loosening or removing the grub screw, and then riding until the pulley starts spinning on the shaft, or with the belt drive connected, just grab the motor can and wheel and work it back and forth until the pulley breaks loose.

Thanks for the tip! I think there’s a lot of green threadlocker in there, I put quite a big amount of that because there’s no keyway / grub screw and with few drops it was coming loose… I think I will need to break the cf bit of the mount, use the battery terminal puller to remove the pulley and buy another motor mount from enertion for my other build

Maybe cut the pulley in half with a dremel tool. If it’s steel it will take a lot of work but doable

y i have an angle grinder, it will be trickier but I could attempt it, thanks!

What I’ve done with stubborn pulleys is heating it up a good bit then wedging a flat tip screwdriver in between and prying it off.

Thinking of making a board with the same batteries but in 8s5p format, is the range still good on the board (by how many miles has it degraded each year). Also in London, do you advise riding on the road (bus lane) or pavement or cycle lane? Your board looks really good btw.