TOFTT Buys on wide trucks (For the EU)

Hey all, I have noticed the EU Doesn’t really have any options for wide hanger/axel trucks but importing them from torqueboards, which costs over £110/120 Euros in many cases (Nearly $140 Freedom currency) unless you group buy them or misdeclare value. The only ones I see are the diyeboard ones with no mounting options and no mentioning on existing mounting (They’re also 50xx only). So I have been contacting some high quality manufacturers and will have a few trucks to test/look at in the coming days.

Caliber trucks are also hella expensive, we pay double the US for the same components too. Of course if these components were at US cost there would be no need to find good clones, but as they’re as expensive as they are (Making a lot of budget builds impossible in the EU) I thought i’d compare ones from china to the real deal electrically and on a pushboard. I’m not expecting to match quality completely, but mount fit, carving ability and metal/strength will be assessed and I’ll let you know about my findings. Caliber clones do exist a little in the EU, and I have ordered some to see how they size up to the originals.

If it all works out, I’m hoping buying 10+ Units should bring cost to about $60 per pair of wide trucks shipped to the EU, which would be much more affordable.

can someone do this for Australia omf @dareno @moone

The same trucks are shipped worldwide for the same prices, so ill let you know

Looking for wider trucks to run dual 6374 motors or pneumatics wheels? These extended length Caliber II clones are just what the doctor ordered!

Yea those trucks are a pretty sweet deal, still like $60 after shipping and they’re only wide because of the axle, I don’t think you can mount dual XX74 to them

I also prefer wide trucks just simply for stability. After riding on TB218 for so long, paris trucks look SO short and I feel like ill be unstable on them xD

I was thinking of getting a pair of those so I can move up to some SK8 6374s, looks like you’ve made my mind up for me

Well the 226mm hanger I ordered (35$ shipped) from china is coming in a couple days. I also already have the caliber clone which was about 18$ shipped and will be testing stuff out a little later today. The shape is a little off, but I think depending on the actual clamp style caliber mounts will work well on them. Its always quite cheap to manufacture custom clamps though, so that could be an option if the truck shape is different but its still a hq hanger

Once I give the cheaper option trucks a try I’ll let you know if they’re an option for DIYers. You can register your own LLC and import the trucks with business tax (Much less) and it wouldn’t cost as much.

How wide are we talking?

Edit: actually I already have one of the trucks. It will require a custom clamp because its a weird shape, but it carves very nicely with a caliber/paris baseplate and is wider than TB218mm by eye. The axle is pretty small though, i’ll need to see if pnumies fit on it

As long as its 8mm I’m happy, is the hangar profile similar to anything else we have?

No, Its in this shape 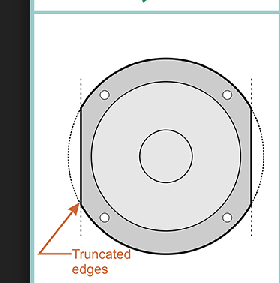 but the truncation is quite a bit further in to the circle, so the clamps/mounts have no chance of spinning, actually quite an easy shape to mount to. It could even be possible to use caliber clamps, if you take 2 of the “top” halves

Hmm that is weird, wonder if we could get a mount maker to produce a motor mount for this if a group buy ends up happening

yeah they’re the motors i have. I had them fitting with dickyhos old 3mm mounts but bc they’re so fucking strong they bent the mount. Got 2 new mounts but they’re 6mm and now they dont fit. I’ve only bought the back truck for now but when I can afford it I’ll get the front. But expensive atm

If the trucks are so expensive, why not diagonal mount?

I went with 6364 for this reason, also being able to run nummies is useful too

definitely. When I had it working holy shit was it powerful though. Running at 60a each on lipos and focboxs. fmd was it fast. I’ll get it to 70a each soon but for now that’s enough