I wanted to pass on some knowledge that will hopefully save at least one or two people from getting mangled the way I did.

Check this out, the Tubular, Cylinder-like part of my Rubber Outwheel instantaneously tore off while I was riding at high speed and messed me up!

Looking at the Rear Trucks after my accident, I noticed that the Rubber Disk-like part of the Rubber Outwheel was still attached to the Hub Motor, but there was a jagged tear all around the circumference of the Disk-like part . (See Photos below)

The tear appeared to be focused around the “Circular edge” where the “Hub Motors’ Tubular, Cylindrical feature” meets the “Outer, Disk-like feature” at the End plate of the Hub motor". (This is the End-plate that the small bolts that are used to mount the Rubber Outwheels to the Hub Motors are threaded in to. )

I noticed that this Outer Edge, which is a circle with same diameter as the Outer Diameter of the Hub Motor was somewhat sharp from when it was manufactured.

Therefore, I used some sand paper to round and dull this somewhat sharp edge on my Hub Motors.

I recommend that You consider doing the same. Don’t take the edge down much at all, just make sure it is dull with a very minimal radius of like 0.5 mm perhaps.

I hope that this is understandable. You see, if you round over that semi-sharp circular edge just a little but by spinning the Hub motor while holding some sand paper against that edge for example, it will prevent that sharp edge from cutting into the inside corner of the Rubber Outwheels, which scores them all the way around the inner circumference where there is already going to be high stress.

But if You are like changing your Rubber Outwheels to some new ones and your Hub Motors do not have any Outwheels on them, then You might consider at least feeling that circular edge and if it seems sharp to you, maybe sand it down a little.

That’s all for today.

Have a Good Ride everybody. 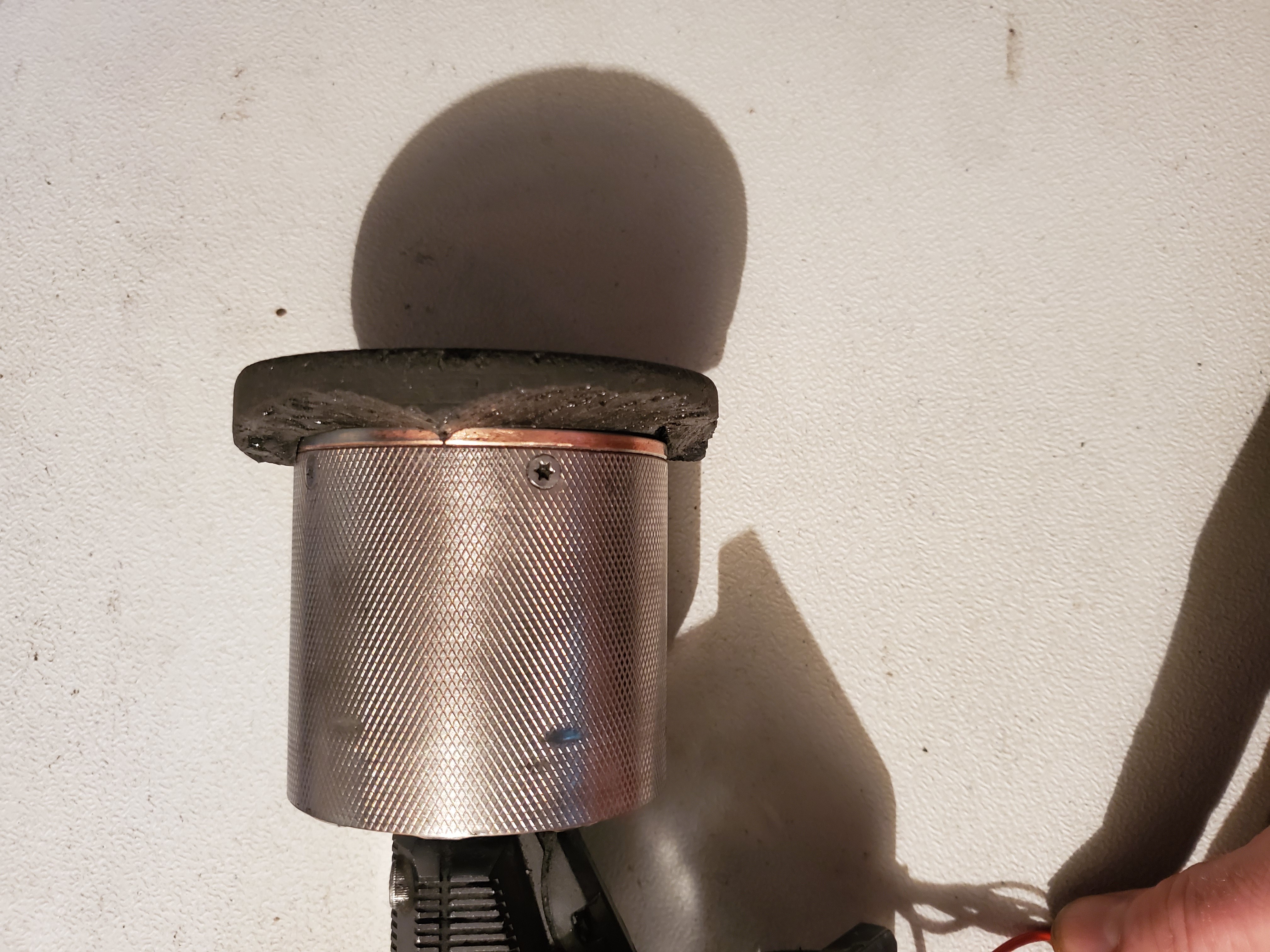 In this Photo, the “End-plate” of the Hub Motor appears a copper like color because I sanded it a little bit. You don’t need to sand it to the point where it turns this copper color, but the “Circluar edge” where the copper-colored “End plate” contacts the inside corner of the Rubber Outwheel, I think it is good to round that edge just a bit if you have your Outwheels off anyway. Say like when You are getting ready to install some new Outwheels… 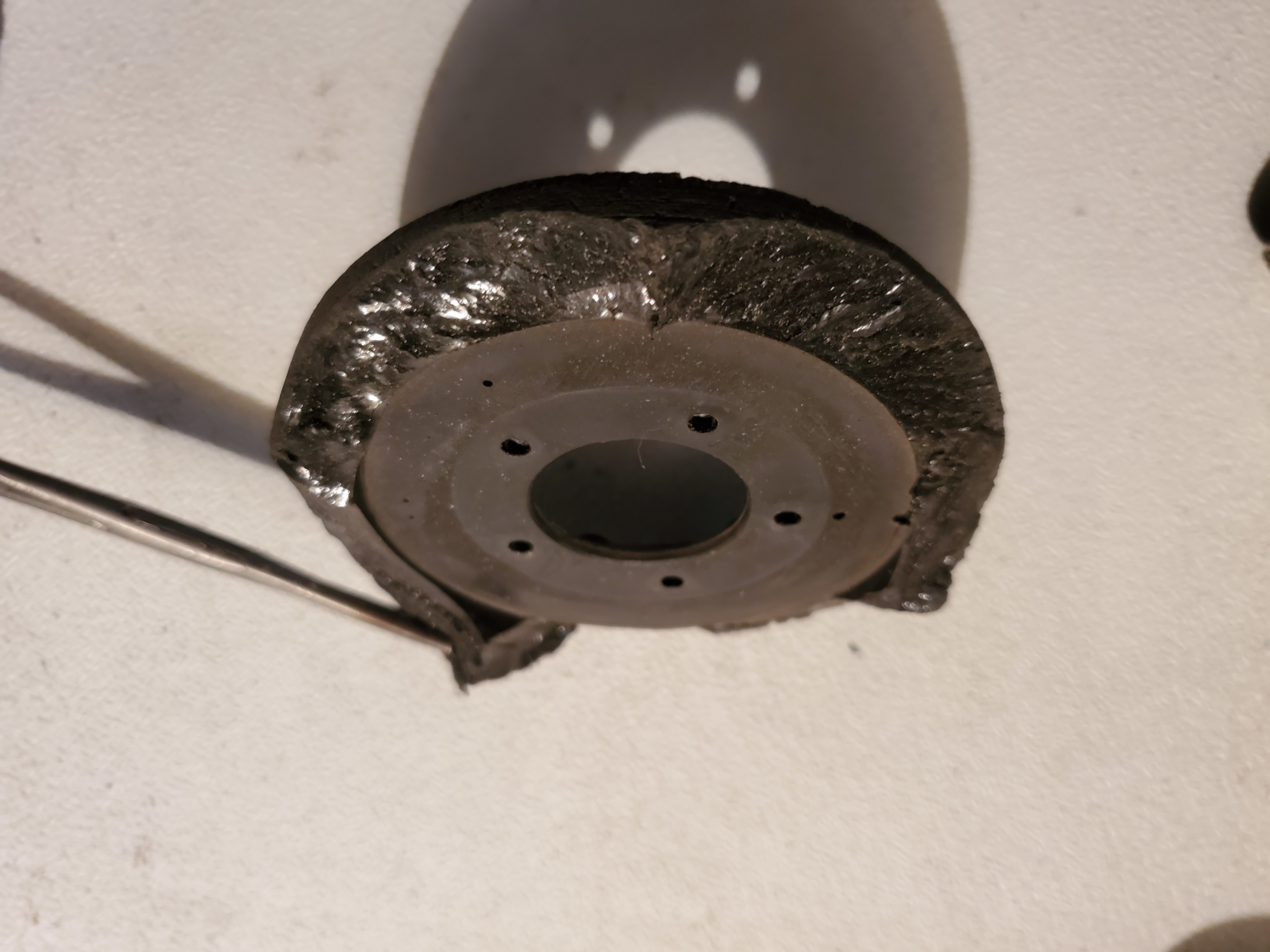 Admittedly my Board produces decent torque, but I think the semi-sharp edge of the Hub Motor might have contributed to this little issue which occurred instantly at a somewhat high speed…

The description I wrote was less than enjoyable to read at best. I might try to edit it some time in the near future.

In any case, I did upload 2 photos to help in understanding what I’m trying to say.

Basically, I was riding down a straight smooth street, and as soon as I got to about the maximum speed I usually go, the Cylindrical part of the Rubber Outwheel just like separated from the Disk-shaped part which is shown in the photo above. It separated instantly with no warning.

I had a pair of the same Outwheels previously, and over time, little pieces had fallen off from the inside edge every so often.

This Outwheel appeared to be in pretty good shape in terms of the appearance of its exterior. But one day it just separated as shown in an instant. It was a rather hot day.

So as a Mechanical Engineer, I started to think about why it had happened. To me it seems like there is a natural stress amplification at that circular edge because the Disk Part is attached to the Wheel with Bolts, but the Cylindrical part can feel a rotational twisting force which meets the disk shaped part at that circular edge.

I felt edge of my Hub Motor where the disk shaped part of the Outwheel and the Cylindrical part had separated, and it seemed somewhat sharp. Not like, purposely sharp, just as sharp as a typical manufacturing process for such a part would leave it.

So I decided it would be a good idea to round that circular, outer edge of the Hub Motor a little bit. I mean just a little bit so there is almost no dimensional change at all. But just sand it a little bit round, and smooth, and dull to the touch, in case that somewhat sharp edge might be contributed to a “Scoring” effect in the rubber which enabled the cylindrical part to tear off so completely.

I thought it was a good idea and thought I would share.

Have a nice day

Time to upgrade to a TB DD Raptor

From one mechanical engineer to another airwolf I would like to give my assessment. The biggest problem with a hub motor and the reason it tears specifically on that line is heat. So I’ll explain in stages. (This applies mostly to enertions units but can be applied to a number of other brands)

Step 1 over time and continuous riding the hub motors obviously heat up. Now this is amplified by the fact the the urethane acts as a sort of insulation keeping the motor shielded from the air.

Step 2. Over time this heat does two things. It breaks down the adhesive keeping the urethane glued to the liner, and it causes the urethane to expand away from the liner. Now keep in mind that this urethane is expanding while in rotation against a surface a thousands of rpm.

Step 3. The urethane stretches, not by much since urethane doesn’t stretch and keep stretched shape much.

Step 4. Once the urethane is stretched and the adhesive is gone the only thing holding the urethane on the hubs is the cap at the end which is bolted to the hubs themselves.

Step 6. Every turn you take is pulling the urethane away from the end of the hub and every harsh acceleration or braking is causing the liner to twist inside of the hub.

Needless to say unless you can find a urethane that is perfectly dimensionally stable and a very high temp adhesive a hub motor with a urethane sleeve is useless for skateboard applications.

Haven’t heard of a pu problem on any yet. Hummiemotors.com.
All hubs aren’t the same

I hadn’t thought about the thermal effects, but agree that cycles with hot hub motors probably played a role. It was hot the day my Outwheel tore off.

Also, I recall noting that the Outwheel that failed was somewhat loose on the circumference of the Hub Motor. I had taken it off to clean it once and it was easy to pull off and push back on to the Hub Motor.

However, I recently got some brand new 97 MM Outwheels and they were very very hard to press on to the Hub Motors because the circumference was such a tight fit.

So I am in agreement that many rotations of the Outwheel on a hot Hub Motor can cause the PU Outwheel to stretch so that it is not in such tight contact arond the circumference of the Hub Motor. Thus, when higher forces are exerted, the end Cap will recieve a tearing force because it is bolted to the wheel while the tubular part is increasingly loose and able to twist.

Right now I’m coming down the stretch on my 1st 4 wheel drive build. I’ll be back online more soon once I get this Monster to the Street!