I am trying to narrow down the cause of my broken vesc, version 4.10

I assumed it first stopped working after braking at slow speed after only being powered on for 1 minute. The motor just started twitching, and it refused to connect via usb, but it may have happened earlier and i hadn’t noticed.

I put it away for fews weeks came back It did briefly connect via USB. Whilst watching real time data, I ran motor detection, the motor twitched and i briefly saw the word ‘drv’ in the fault section, the vesc then disconnected and will no longer connect via USB. Now when powered on i just have a single solid blue light.

Does anyone know any other tests i can do to pin down the cause, before i blindly attempt to replace the drv.

Go to the terminal tab and type “faults”

Go to the terminal tab and type “faults”

I dont think he is able to connect to PC.

What you describe with the phase wire resistance is most probably (if I understand correctly) a blown FET or more of them. And if you saw that the DRV error was displayed in the real time data, that will need to be replaced too. check your motor very carefully because this scenario (blown FET and DRV) usually means that the phase wires were shorted, in some cases maybe the connectors touched and in others the insulation on motor wires got pierced most probably against the motor chassis. So it seems like you will need to replace/have replaced the DRV, FET (maybe multiple) and maybe gate resistor (maybe multiple) because those in many cases fail with mosfets.

Check your motor, not only resistance between wires but also measure the resistance against the chassis, put one probe of your meter somewhere on the motor where there is no anodization or other insulation (stickers etc) like the shaft or bearing for example and measure the resistance to all the wires while bending and moving the wires to simulate the motor moving as you steer your board. If you find that there is a short, you will have to work on your motor too or replace it, also check the wires visually. There also may be something inside the motor like a rock for example that damaged it and shorted the phase wires, not very probable since the motor works with other VESC but worth checking/cleaning

Thank you Martin, yep i think you are right regarding at least a blown fet. Im just looking at the schematics and the pcb layout on osh park to get a better understanding on how it works. Ill start with the motors i think, no point trying to fix it to blown them again when testing. Then ill turn my attention to the fets.

Thanks again, ill be back

You also most likely got a blown mcu.

Isn’t much i haven’t blown by the sounds of it lol. Just the one fet stuck closed. Desoldered it, its knackered, the two gate resistors seem fine though. 4.7 reads 5, 39k reads 38.77 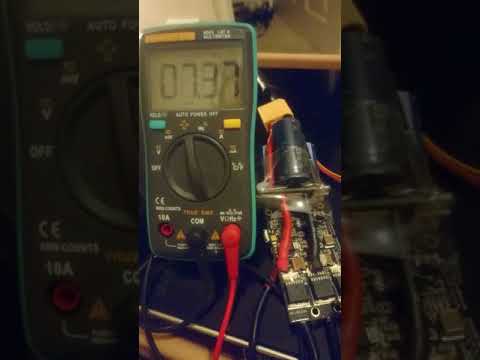 5v is fine, 3.3v is fine. which makes sense as i read its walled off from the rest of the drv.

usb resistors to MCU all fine. All USB pins have continuity.

MCU must be damaged unless a firmware/bootloader can be corrupted? might as well get an st link first, will need one if switch mcu out anyway.

I doubt t is going to be a bad resistor or other passive component, I would suggest trying to use stlink and replace the fet and possibly drv too

Well i never, flashed the firmware included in bldc tool with an stlink clone and bam! Its alive, usb works again!!! Connected with vesc tool and updated to latest firmware. No faults showing at the moment. However i cant test anything until the fet arrives.

Something will go wrong again, always does for me. Ill prob bbq the fet again.

Have you located the reason why it happened originally?

hmmm, just wires touching maybe? like only partially heat shrinked connectors? As long as it does not happen again it should be good!

No idea how the fet failed or how that can corrupt formware/bootloader either. Maybe a stray bit of solder did it.

Yeah, solder balls may have caused this. Or maybe just some conductive crap that may have shorted the gate of the mosfet which may have caused some weird behavior and blow the fet possibly. I think that the max voltage of the gate is 20V but I am not 100% sure. If it was one of the FETs on the side where the DRV and MCU is this is possible. If it is on the other it is not this scenario because the gate would be connected to ground which would not destroyed anything (tested this, unintentionally soldered gate and battery negative together and it just did not work, after removing the solder everything was fine)

Its the power side where the wires are soldered

Aha, than it has to be some other cause

Well… I guess we will just have to wait and see… BTW, have you cleaned the VESC after soldering the FET? With alcohol or other flux removing chemical. Useful mainly for removing solder balls and other potentially conductive crap to prevent further damage.

I will do, after im completely finished messing with it tonight