When does your bms really balance?

all the ones I’ve been looking at have the same function where they balance by discharing a tiny amount through a resistor only when the cell hits 4.2. All the bms I’ve seen have the balance current of about 68mah. That’s tiny and unless the pack is being charged by a very slow charge a single cell could easily be getting fed more than 68mah so still taking a charge beyond 4.2

Can you explain everything on the description: 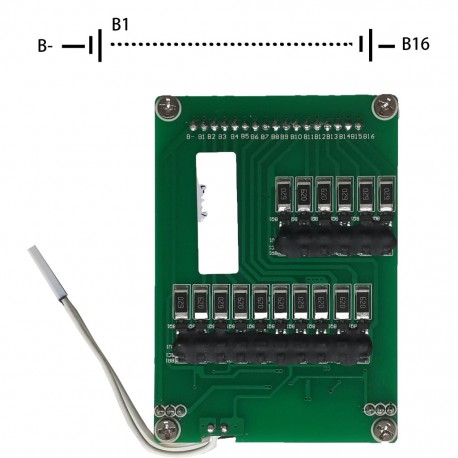 I dont understant the over-voltage protection because if the bms were able to stop charging a single cell at 4.2 then there wouldnt need to be a balance function

During the CV stage the current decreases rapidly. For instance a 10S pack will hit 42V while charging before the pack is actually 42, if you disconnect the second it hits 42, the pack could easily drop down to 41v. The CV stage starts once the charger hits 42 at constant current, then starts decreasing current at a rate fast/slow enough to maintain the 42v till it hits 10% rate of original charge current and stops charge

Also, all these BMS are meant to keep new, balanced packs in balance, not balance mixed, aging, drifting packs.

I believe my power supply works with a constant voltage. I set it to a certain voltage and hook it to my pack and it will charge to that voltage and decrease the current on the way up there. when it gets near the full charge, lets say 50v, it does slow down the current but if there were a bad cell in the pack how would that play out? If a bad cell were to hit 4.2 while everything else were even as high as 4 volts, and the power supply is still feeding 8 amps, which is common, and if the discharge balancers only are able to burn off 86mah,…that cell will go much higher than 4.2 unless there’s some other feature that comes into play.

bms for only new balanced packs in balance?! that defeats its purpose though. eventually a pack will age and drift.

If you have a pack with a cell .2v apart from all the others, that cell needs to be replaced. These BMS aren’t meant for fixing unbalanced packs

so how would it end for a pack with a typical bms that did happen to have a cell with .2v variation? ive had that happen many times with lipo that I’ve damaged

Often times the BMS itself is faulty and burning energy somewhere

but I’m only talking of the balance function, how will it’s other possible functions do something productive in such a case with an unbalanced cell. Other than damaging a lipo, which is relatively easy to do, there could be cells getting cooked due to how the pack has the cells arranged. or maybe the cells were soldered badly

This will do 6A constant, 10A burst active balancing

1s active balancer review Today we are taking a look at the 1s balancer from www.gne2010.com. And no did not get those for free. I payed for them myself! What is a balancing system good for? This is not an in depth analysis of how a balancer works...

The title is misleading,^ it’s good

There are also BMSs that start balancing earlier than 4.2v. Mine has configurable settings and I have it set to start balancing at 3.7, so it’s ALWAYS balancing. Sure, that may waste a tiny percentage of the power in the balancing, but I don’t have to worry about cell drift, like, EVER.

what bms is that? I don’t understand you saying it would waste more energy in it’s always balancing. the alternative being have a cell that’s too high?

maybe I don’t understand how a bms works. Does the high voltage cut-off shut current going to the whole pack and stop the charging if any cell hits that? that single cell balancer is surprisingly big and expensive considering id does nothing else. but it’s “active” and transfers the overfilled cells to the lower filled and that’s ideal. i’m still looking!

The more I know about BMSs the less I want to use them on my builds, nevertheless, I’d never recommend anyone to run without one.

After 1 year riding my Vanguard with bms only for charging I’ve never seen any of my cells drifting, if the connections are good, they wouldn’t drift at least it has worked for me.

I never run them below 3.2v, usually 3.6v before it’s connected to the charger.

The overcharge function on my Street Carver kicked in several times, cutting all current supply to to battery during charging at 3A, when one pack peaked 4.3v, as soon as I switched to 2A for charging everything was smooth again

It’s an 80a BMS from aliexpress. All the BMS we use for esk8 are passive, so that means every time it balances a cell, it’s wasting some energy. Might not be a lot, but my guess is that having the balancing start earlier probably has some small impact on the overall energy lost as waste.

If one cell goes seriously overvoltage (like 4.3 or whatever the maximum overvoltage setting is) then the BMS will shut off until it has balanced that cell down to match the others.

The active balancer has quite a bit of active power control circuitry in it, to step up the cell voltage, send it, receive from another one, and convert that back down to charge its cell, as well as communicate with the other modules. Very sophisticated system. Not really necessary for our small packs, but definitely needed for powerwalls, large EVs, etc, that can be well over 10KWh.

What, the BMS I have? I warn you, it’s pretty large and the shipping can be unpredictable. @stormboard1 has one, and it took him ages to get it. https://www.aliexpress.com/item/36V-Bluetooth-BMS-for-10S-42V-Li-ion-Battery-PCB-board-with-80A-constant-charge-and/32826867315.html

finally your eyes are open.

“A BMS is really helpfull and everyone should use one!”

“Fug those BMSes, they kill packs!”

some people are all “OMG you should only use BMS WTF! DO you want to EXPLODE?!”

and then other people actually understand the electronics in the BMS are like… uhh yeah they are nice to have. but they aren’t magical unicorns that save you batteries from all demons.

they are a board that does 3 things: make charging 1 plug bleed resistors on higher voltage cells FET switching for low volt cutoff