Hi Guys! I need your opinion about it! It’s not going to be easy to make it so I need every opinion I can get. Size similar to Jet Spud. Space for 10s5p pack and some electronics. Is there space for mounting trucks? I feel like a 10s5p will take a lot of structural integrity away risking cracks so either make it longer and thicker or decrease the pack size! Also, work on the concave, its very important!

The solid area it’s about 70mm so trucks should fit. I can always make it bigger but I want to push the limits and make it as small as possible. The concave thing is the hardest part for me because I never skatebord in my life

how thick is that total?

What type of wood are planning on using?

Electric skateboards are easier flat, for batteries, but better with concave. Strength is hard, which is where material choice is important.

I tried for over a year to make a board like this work, but I had too many fail while riding. So I went back to the basics. Maybe reinforce with carbon fiber and use the wood as a core? Just food for thought.

I plan to use maple plywood (18-20plys) as I mentioned in your build thread. Also there’s an option to order custom plywood and add some carbon fibre or something else. As for shape…

Mine is now this Flatcave/Gaspedal and please tell me is that ok?

For electric skateboards, that shape is the easiest shape. Never ridden a board like that, so can’t comment how it will ride.

Personally, I like the progressive and radial concaves best. But they are harder for electric skateboards.

In my opinion you should make a compromise between size and range. The small size will likely not feel very stable at speeds of 25mph. and will probably make the ride uncomfortable after a few miles. If I ride my 10s3p all the way, my legs are already as sore as can get. Same goes for grip on the board carrying the 10s5p weight.

Thanks @Skitzor! I never thought about it. Maybe in my pursuit of a good performance and compact size I’m going to far? 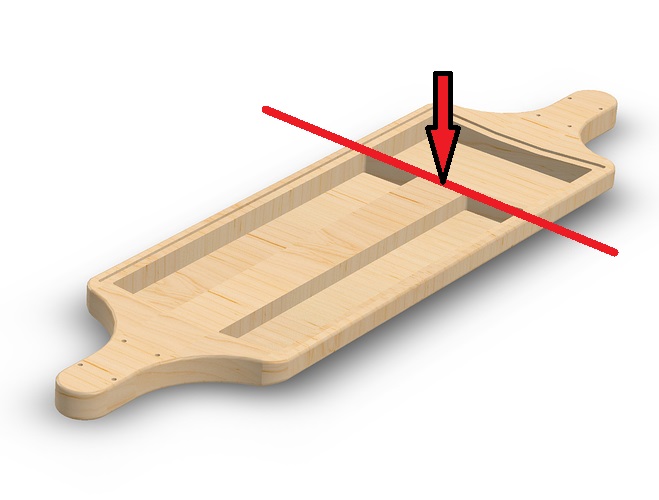 , I seriously believe that that is your weak spot on either board. You still have to run wires from your electronics to your vescs, so even more from that T structure will be weakened. If you stay with this I don’t think wood is an option, you’ll have to go the carbon fiber way.

So have you decided on a battery size? 10s5p is overkill for this size as I told you earlier. (imho) Also, while you are thinking of a lay-out. How is that cover going to work? should it be easy open-able or are you going to close it shut with bolts ?

I must stop doing this night time… Again you are right. Second one looks like crap but It’s a atempt to make concave not flatcave. I have a new idea based on first design with 10s4p battery. As for cover… Bolts for sure. This will create like outer shell and will be crucial for this design. Once build is done you shouln’t have a need to look inside very often.

Well that all depends… I think something the size of this is looking for just a 10s or maybe a 10s2p battery. (Again, that’s my opinion and advice) Which saves you some room on the interior. Going from this standpoint. You have a 10s4p (5p) in mind. Going lower in capacity, but giving interchangeability a chance, you need a lid (and battery) that’s easy removable.

And yes, whatever shape/size, concave is a must !

I think I have mentioned this before on similar thread, but a inexpensive way of adding rigidity is by adding lengths of aluminium extrusions, say 90 degree angle. Of course it would have to be insulated so as to not cause shorts circuits to the battery and electronics.

The T thing isn’t going to work out as planned. There’s a reason Ollin sticks with the 4.12 format for VESCs. They fit in the channels that go all the way down the board and structures like this are avoided. ITs also one of the reasons he uses dual diagonal. You’re going for dual rear which requires the pocket you drew up. That pocket is the source of the issue.

Instead of having a single pocket, bring the center wall all the way down to make two pockets, and widen each one at the end to contain either a 4.12 or 6 formatted vesc. then you can notch the tops of the walls for wires and not dig all the way down for them, leaving some wall for strength.

Another option, and more complicated, would be to laminate all the necessary connectors into the veneer.

Have you considered reverse engineering a deck design based on a vendor’s existing battery pack dimensions?

It might make it easier to keep the structural integrity of your design, rather than offering heaps of space for custom battery packs.

I built something similiar. Space for up to ~14s5p (10s5p installed) and two esc. So far it survived the first test drive. @baxter aluminium is no good. It depends what alloy and hardness but this what is easy avaiable is no good. It bends and just stays that way. If a first prototype fail I’ll try a insert from square carbon fibre tube. As for battery I was planing to build a battery exactly this way http://esk8content.nyc3.digitaloceanspaces.com/uploads/db2454/original/3X/5/8/58cca4c4aa9232e96e0e0307d65a5268758dfc72.jpg @Jinra I hope you don’t mind that I used your photo? I belive that here more pople build their packs than buy ready ones.

@longhairedboy thanks a lot I’ll try to follow your tips.

@fummy wow! nice one but it looks like quite thick. If your works, than it is more hope for mine to be ok

And question about CONCAVE! Is 5mm enough? How big it should be?

@BoostedBuilder good eye! There was not enough space for trucks before preview2.jpg2386×1775 464 KB
This one is not very universal because it’s for those trucks http://www.trampaboards.com/trampa-skate-truck--with-38ths-of-an-inch-or-9525mm-metric-hardened-steel-hollow-axle--p-11146.html I know the holes are wrong