After the first DIY build with long 41" deck and 107mm wheels, I wanted to make another esk8 for commuting purpose that has much lighter weight and is smaller to carry. Then I was looking at someone who transplanted their boosted board V1 into the Loaded poke deck. It seemed really cool but I wanted to make one under the $900AUD ($702USD) budget, so buying boosted board ($2100AUD) + Loaded deck ($270AUD) for transplant wasn’t an option for me. Instead, I decided to try another DIY build challenge

My aim for this build were: 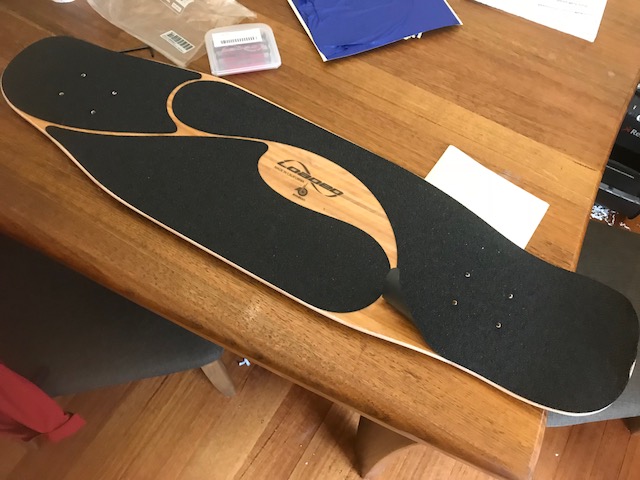 So just got the Loaded Poke deck. I wanted to put a rivet nuts and wires underneath the griptape just like the original BB so I’ve used hair dryer to gentle pull the griptape. 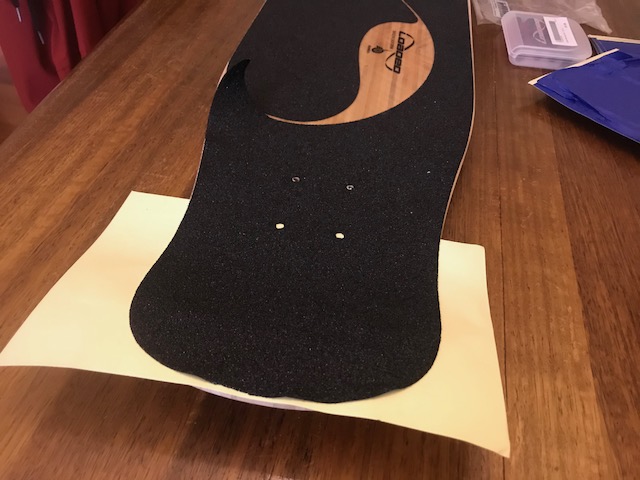 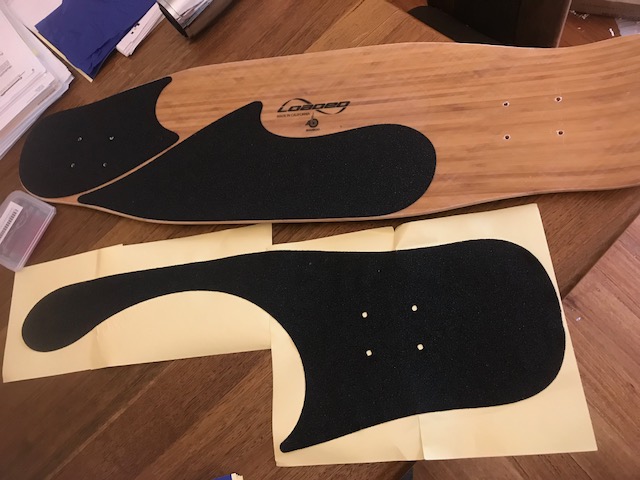 When I pulled the griptape successfully, I used sticker storage paper to temporary store the griptape so I can re-use it later after all the wiring, drilling work.

For my first DIY esk8 board, I just used hand-drill but the screw hole locations were not perfectly accurate. So I used the CNC machine this time to make sure every screw hole is aligned. I also CNC-drill the wire slots from Battery enclosure to ESC enclosure, I’ve used 14AWG wire for extension battery cable and the slot is 3mm deep. I didn’t want to drill too deep because Loaded Poke deck was thinner than the other deck I’ve had so I was worried if I would make the deck weaker by drilling too much. 3mm seemed like an optimal depth for the wire slot. Also Loaded Poke deck is concaved so rivet nuts were not fitting in fully (This case, the rivet nuts will lift up and the trace will be shown on the griptape). So I had to CNC-cut the surface flat around the rivet nuts area as well.

Here are some photos after the CNC-drilling work: 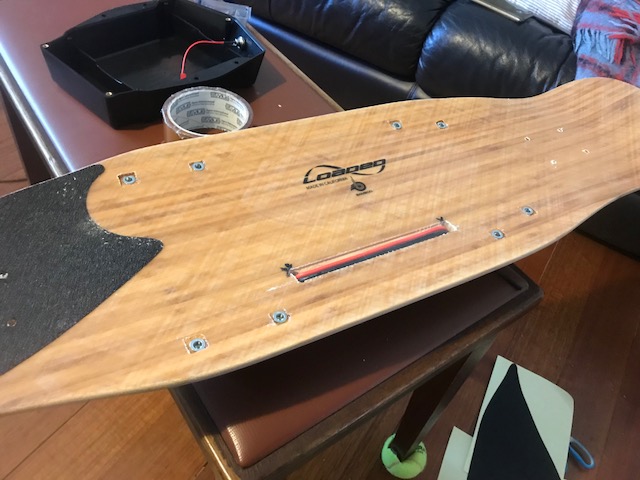 Now putting back the griptape that I took out before… 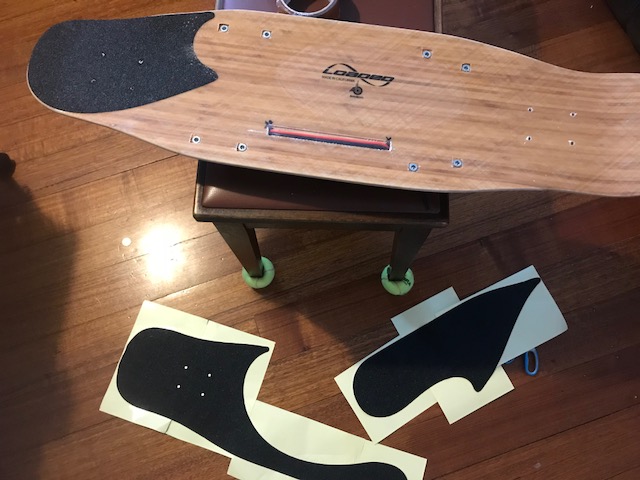 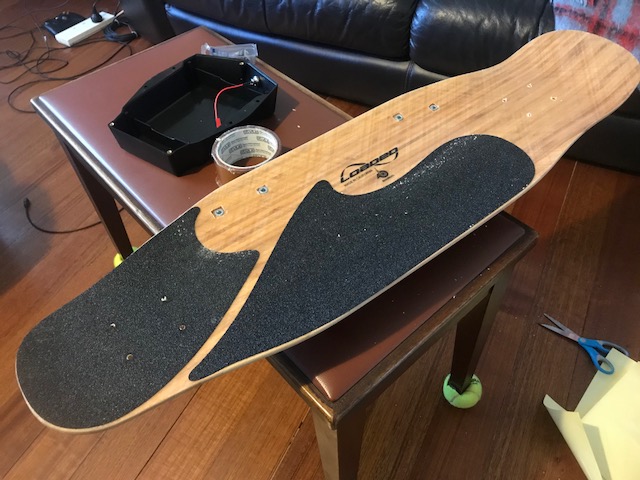 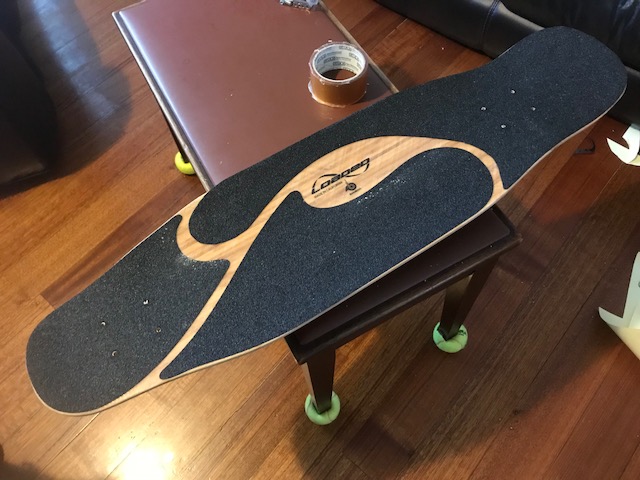 I was pretty happy with the result. I couldn’t see the trace of wires or the rivet nuts on the griptape. Just looks like a normal longboard. Loaded Poke deck came with the pre-cut griptape and there were some area where grip tape is sticking outside of the deck. so I had to trimmed a bit of griptape using razor blade. 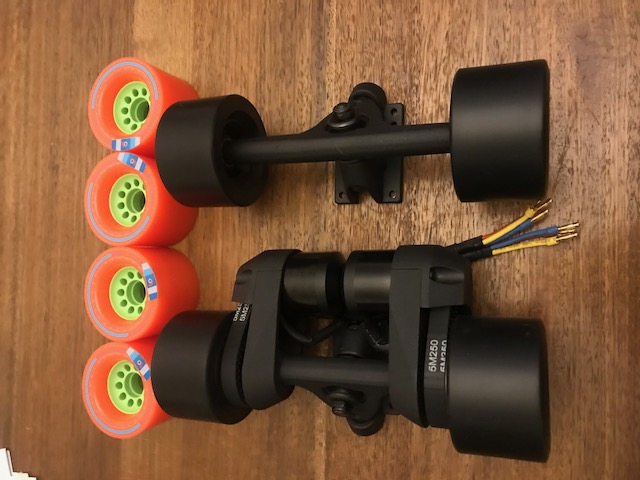 I think it’d look fantastic when I finish the build

The enclosure is from Yeeplay board. I really likes this enclosure because ESC enclosure looks so much similar to the original BB. Bottom plate is made out of metal which will work as a heat-shrink. Battery enclosure is for 10S2P size (little-bit shorter but wider than BB style enclosure) and it seems perfect for Loaded Poke build. I also have Yeeplay M1 board which is really fun to ride, I will upload a reviewing video of Yeeplay board soon as well.

Nice! … I’m interested in how cheap that battery pack seems to be. I’m also interested in that enclosure for my 2x5s 5000mAH lipos.

What VESC did you use

What is the top speed

I got the battery and enclosure from Yeeplay. It’s just a 10S2P 22P which is cheaper than 25R or 30Q. However, Rex from Yeeplay gave me a good discount on battery. Enclosure has plenty of space, I think you can put 12S2P easily or even possibly 10S3P if I sand a enclosure abit.

Are you going to put on the kegels?

Yep, of course. I am just waiting for the pulley to arrive.

That is a sweet build

whats a good way to get ahold of yeeplay?

I just bought the battery and enclosure with the Yeeplay board. You should email and contact Rex (from Yeeplay), then he may be able to help you out. Rear truck is from DIYeboard. I had to cut upto the motor mount part. The 8mm axle had those grip grains so I had to sand down flat so bearing can fit through. Seeet build mate, I adore kegels but the roads in my town are too rough for 80mm wheels

Where abouts in Aus are you?

I am located in Melbourne

I have Evolve/ABEC11 107mm Superfly on my another electric skateboard because I thought 80mm wheels would be too small to roll over the branches and debris. However, I got 80mm kegels on this build because I wanted to reduce the weight as much as possible. After riding for 30~40mins, I couldn’t feel much difference in riding on footpath compared to 107mm wheels. It definitely rides much better than 83mm flywheel clones that came with the DIYeboard dual belt kit. It probably wouldn’t make the rough gravel surface though.

I really should get some 107’s, my 83mm enertion clones are really hard and make my feet numb. What are roads like down there, do you have the really chunky bitumen stuff like here?

There are some bitumen (maybe about 6mm~10mm in diameter big) but mainly a lot of wood branches. I haven’t really tried 83mm enertion wheels but 80mm Kegel feels much smoother and better than 83mm clone wheels. It make much less noise when riding on footpath, 107mm feels pretty much the same but just makes the ride smoother (you feel less bumps) imo.

would tb kegel pulleys work without modifying the truck?

Sorry, I am not too sure because I only tried evolve and DIYeboard ones. Although it is not too difficult to cut out some trucks.