I just finished designing my board. My only dilemma is that I don’t know if It is a good choice. I rode my friends boosted gen 2+ and it was fun, but it just seemed a little slow and frankly, 14 miles doesn’t seem too far. I built my own that would go faster and further (check link). I’m mainly using this as a commuter around campus, so in that aspect, a boosted would be better (I’m looking at the boosted stealth). My diy would be a lot more fun! On my campus, there are some crappy roads and brick sidewalks, but mainly I would be on smooth roads. Almost nothing I build is going to compare to the comfort and reliability of boosted. Which one should I choose?

I hear that a diy’s throttle is going to be a lot more jerky. Also, I have a stiff deck, so I’ll feel a lot more bumps. Its ~2.25 miles to my classes and another 2.25 back. I also may want to bum around and go other places in the day. I go to school in VA where there are a lot of hills. 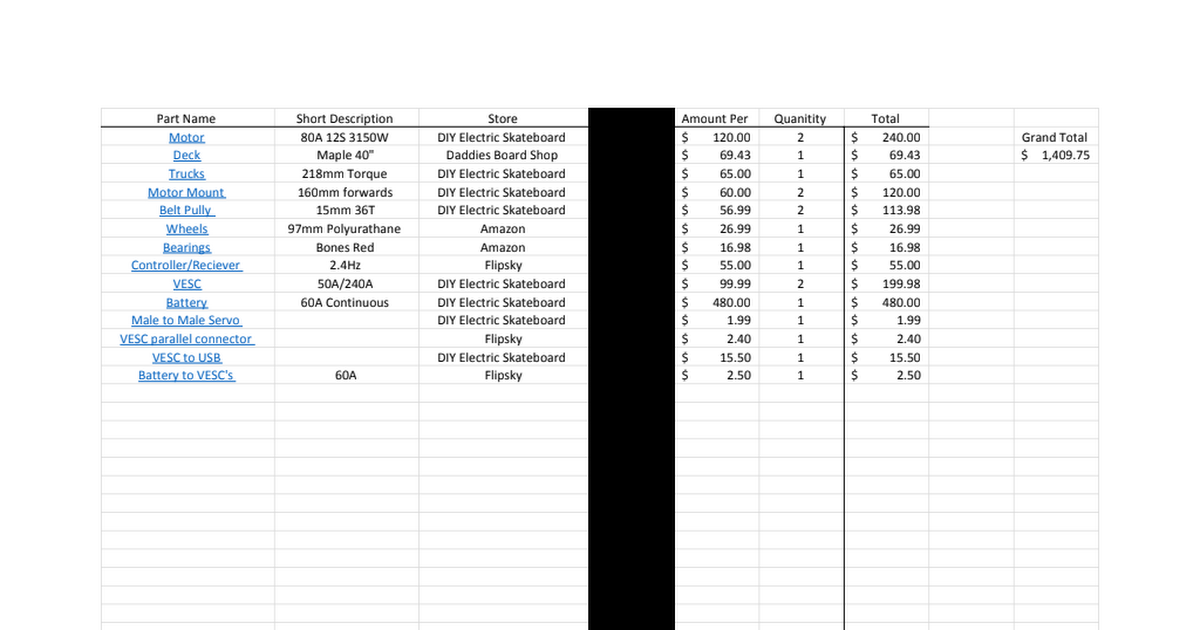 Hey man, looks like you did some research. If you are riding a boosted on hills the range is going to be petty shit. A diy board could be super comfortable if you design it that way. You could make a boosted clone using the loaded vanguard and an upgraded battery. That will give you the same comfort as boosted with like double the range. As for the jerkiness, you can program your esc to have less of a startup boost if you want. I would definitely go diy

It depends on how good you are with diy. You can build one exactly the way you like it. It could look like a BB and ride like a BB, but faster and more range. There are boosted clone builds here. You can search them and get some ideas. But it would definitely not be cheaper. And addicting so you would end up building more.

The boosted clone I build was way faster, had 2.5 tones the range, had a lot of torque, was way more comfortable and had an extremely smooth remote it even costed a little less, the main benefit is the in-house immediate repair/maintenance service you will have as when you build it you become the service guy

If you think 14 mile is not enough range but you want around campus usage, you might as well have two boards.

I think around campus boards needs to be a small one to take in I’m and out of buildings easier.

Although that would be absolutely awesome, I wouldn’t be able to afford 2 of them. I’m trying to design a better boosted, but It is hard to keep the $$$ down.

If you are not sure what you are doing. DIY will likely cost more down the line. You will need tools that you might now have. Visit the hardware store many more times than expected and repair/replace this and that along the way.

Have you checked the longer range Boosted Mini?

The boosted mini is too slow. I have done countless hours of research on the DIY boards. I do believe I know what I’m doing. Right now, I’m trying to design a boosted with dual 10s1p battery packs and dual 6355 motors.

1P lipo? Because if you use 18650s you will not get much power out of that pack.

You will need to run lipos because 10s1p on 18650 will not give you enough discharge rating to run 6355 motors.

The Mini X has the same hardware as all other more expensive ones. Basically they’re selling us DLC to unlock additional speed modes…

But than he is already at 12s

@TheRafter Bro just grab this and a board of your choice and done. About the same price as boosted

A used boosted is a hard proposition to beat at around 500 dollars. Not many people are able to build a higher performance board without spending closer to 1000, especially on their first build. All the little things, screws, tools, wire etc etc really add up. And inevitably a diy board is not going to be as polished a product. The only time I think diy really makes sense is if you really genuinely want the extra performance, as there’s not much in the mass manufactured world that will give you that.

I would, but that doesn’t work with the vanguard deck. I’m trying to build a boosted alternative, but the battery pack would just break right in half.

That’s true. Another alternative would to use eboosted split enclosure and a 10s4p liion pack. It would be pricy, but worth it

Does anyone here actually use a boosted with the extended range battery?

My question is: is it really enough? I feel like I would run out of battery pretty quick, but I guess I’m not too sure how far 14 miles really is. To me, it seems like that wouldn’t last too long.