Over the past 6 months I have finally managed to cobble together a carbon fiber enclosure.

To start this off, during the summer I put together a CAD/CAM of what I wanted it to look like. Then to build the mold plug I laminated two MDF sheets together and cut it out on a 3d router. 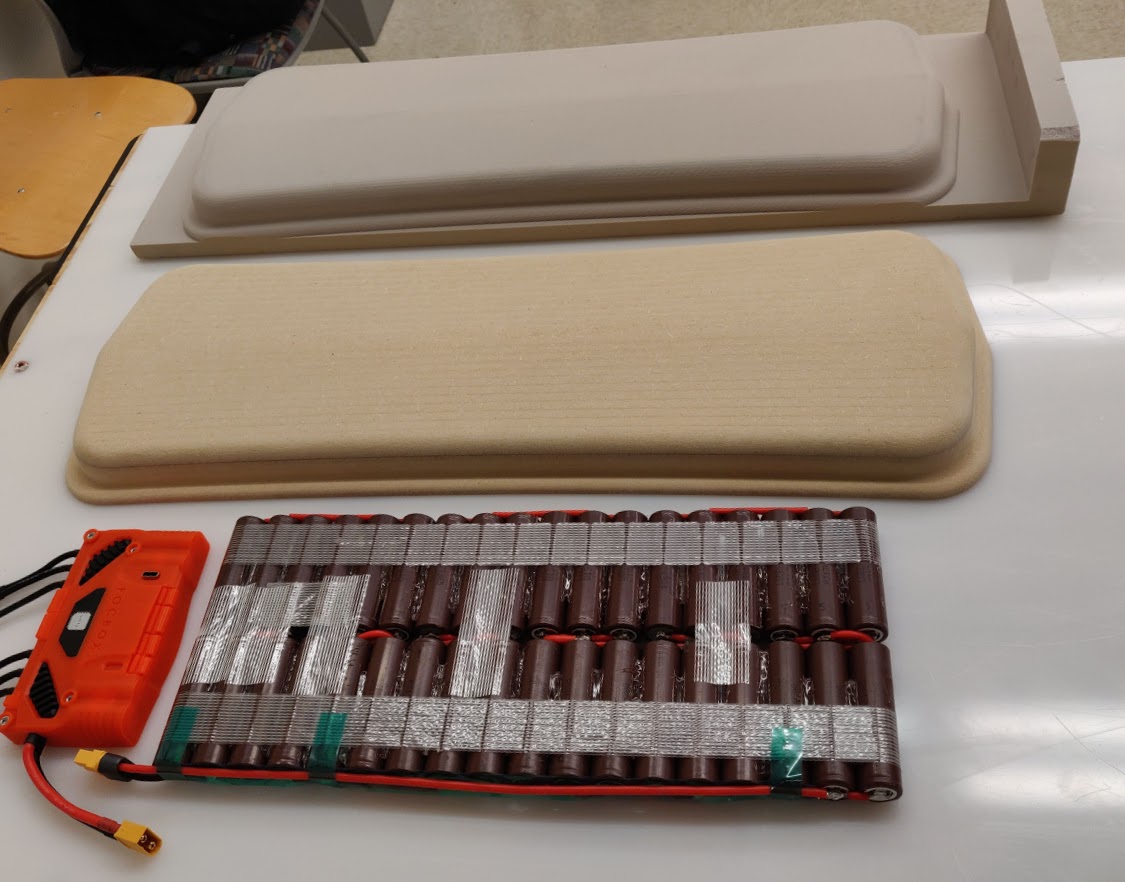 The resulting plug was fairly rough and had a fuzzy finish due to the MDF particles, after a few hours of rough sanding and a coat of epoxy I was then able to sand it down to a smooth finish. 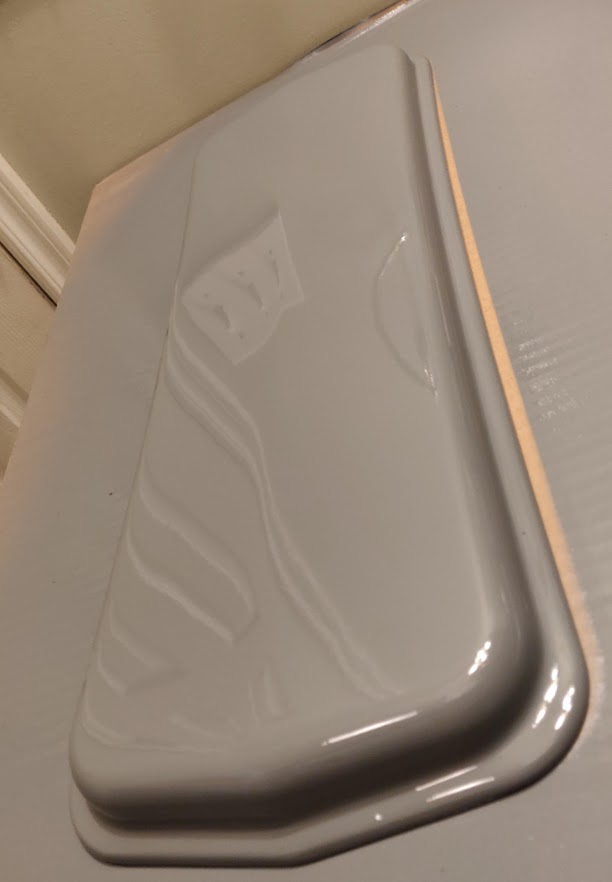 Due to school starting back up I had to take a 5 month hiatus on the project, then last week I was finally able to pick back up on this project. So commenced the mold making process. 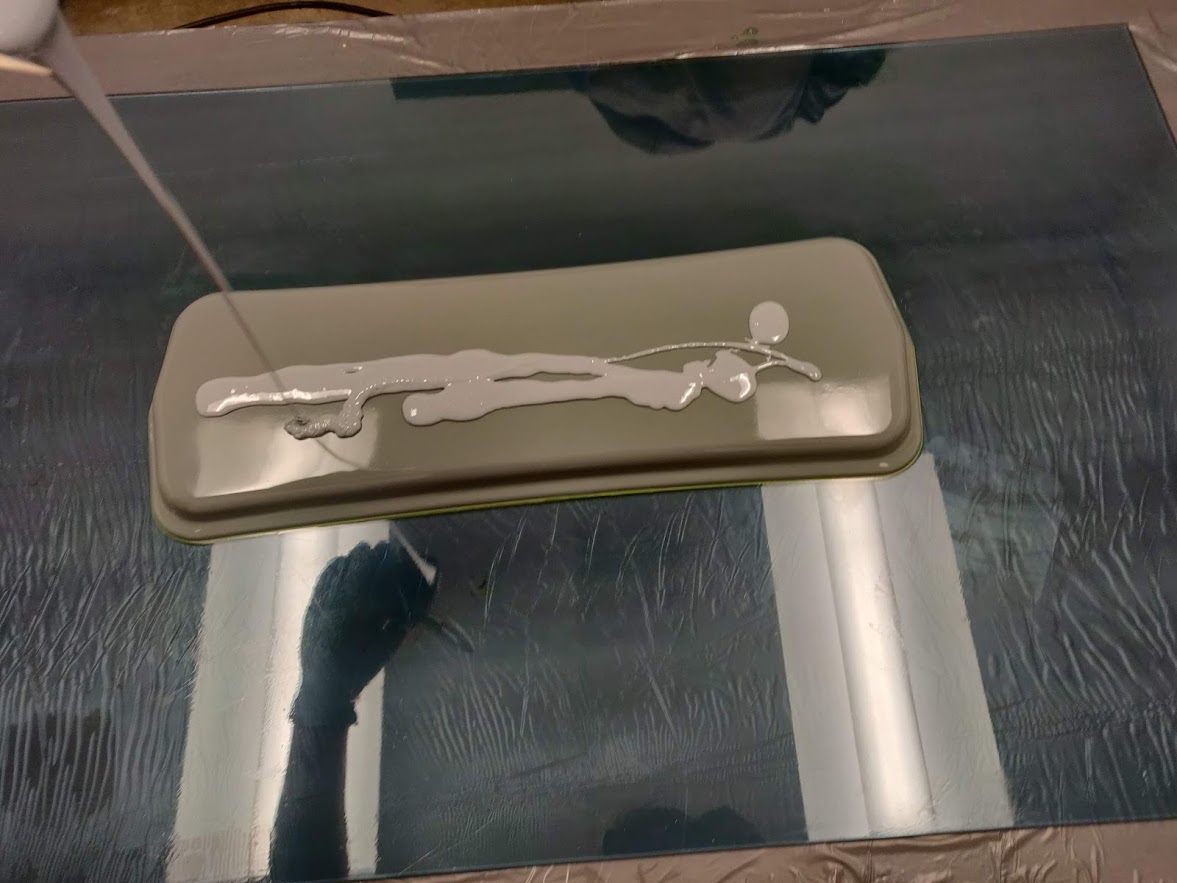 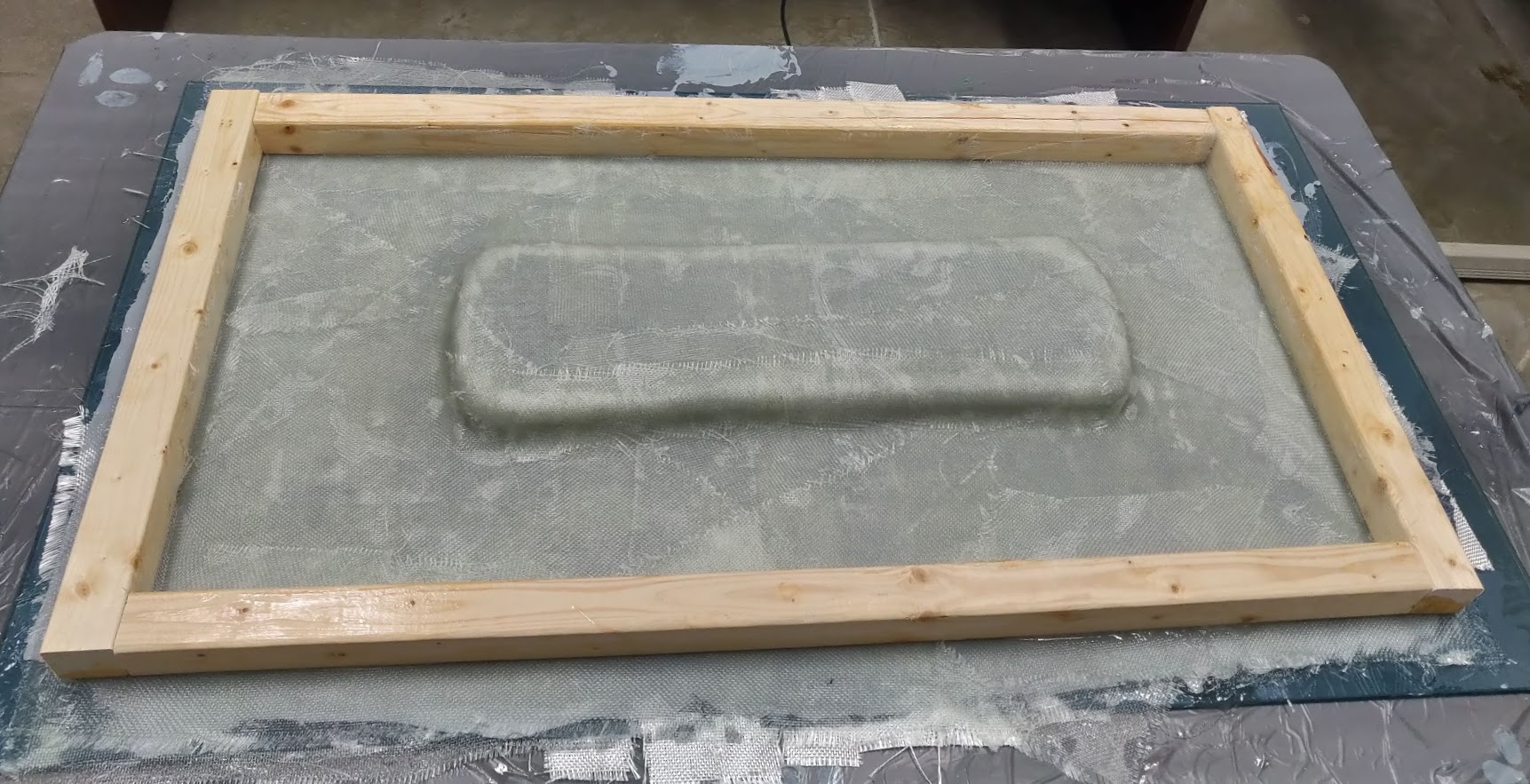 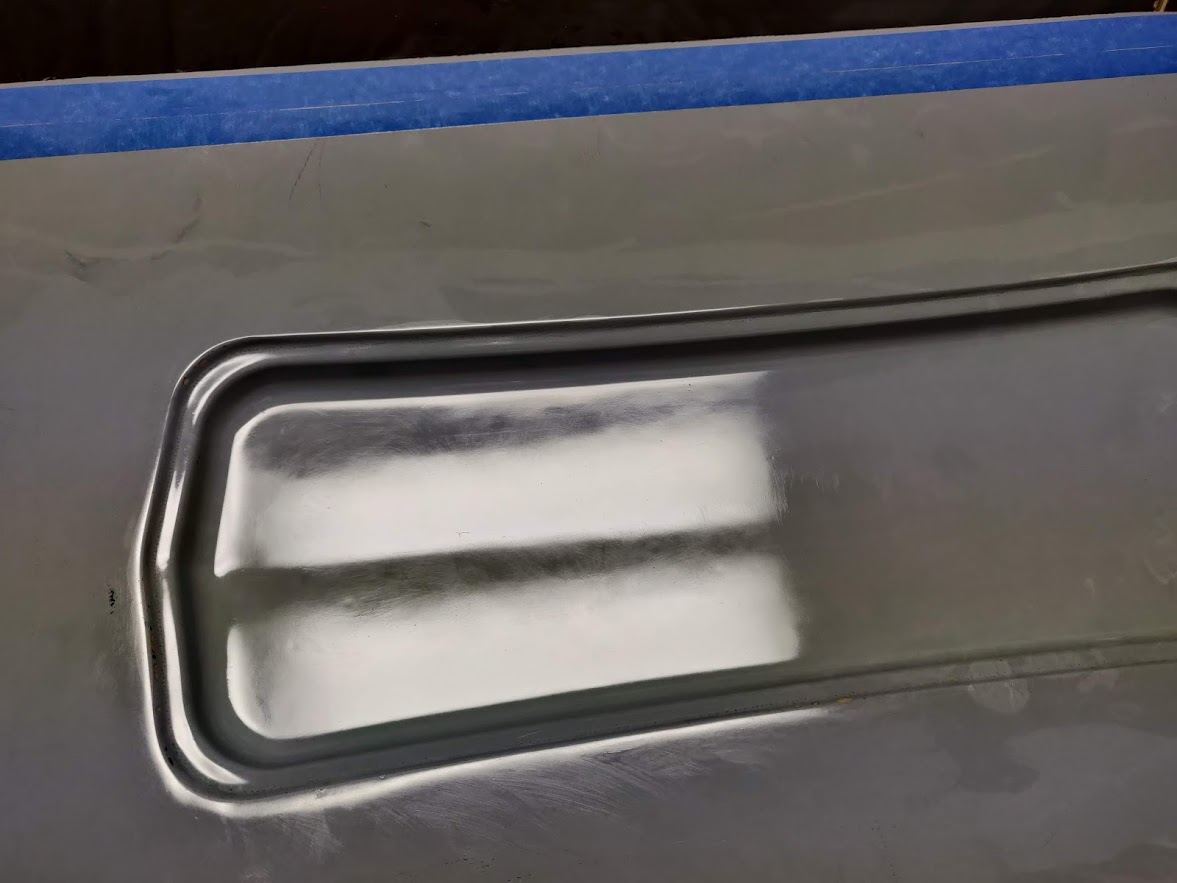 This was the first time I have messed with infusion layups so it has been quite the learning experience, I think the radii of curves on the mold are too small for infusion, as the stiff infusion mesh was unable to properly conform to the mold under vacuum and once I began infusing the resin a vacuum leak appeared in the bag which I was unable to find. 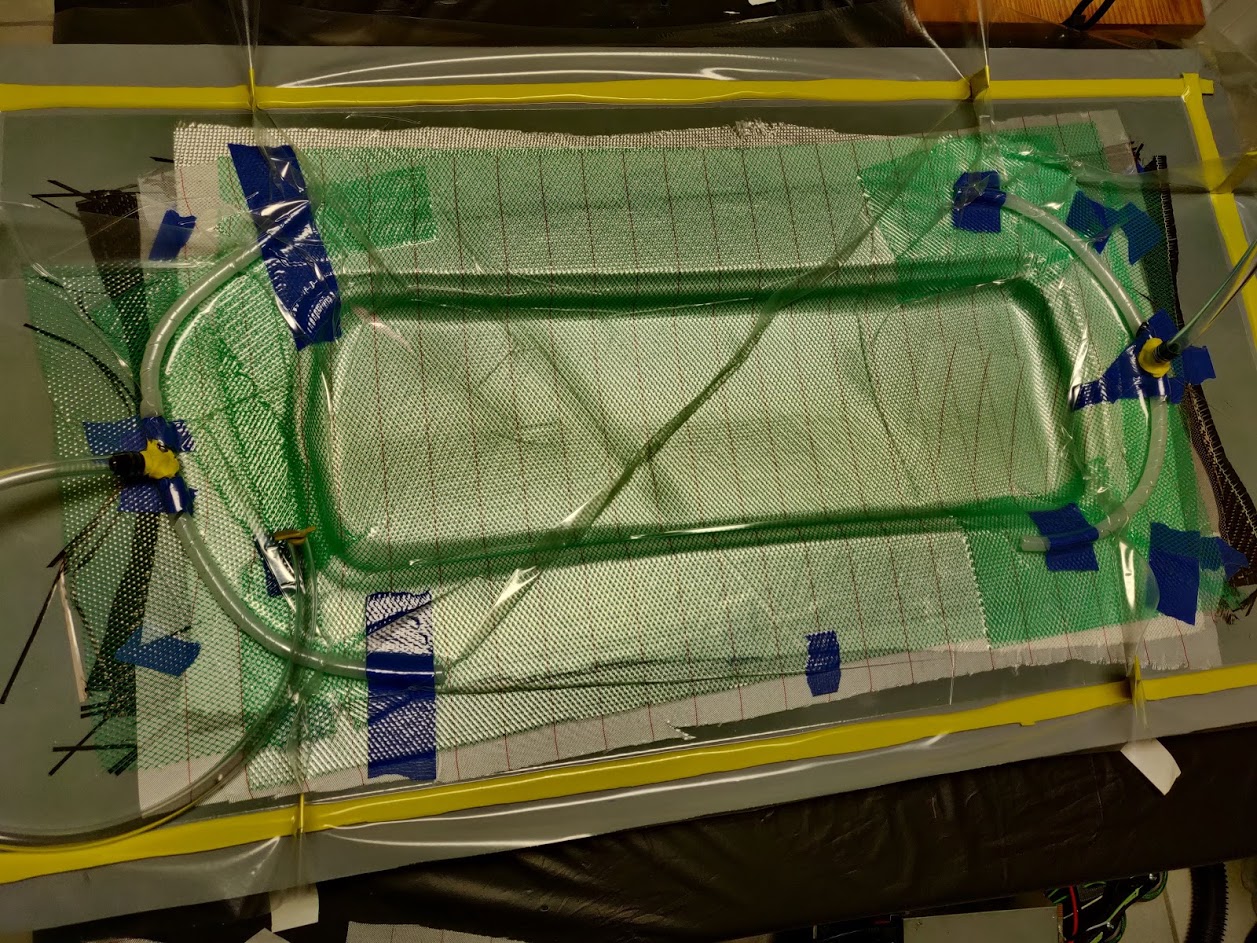 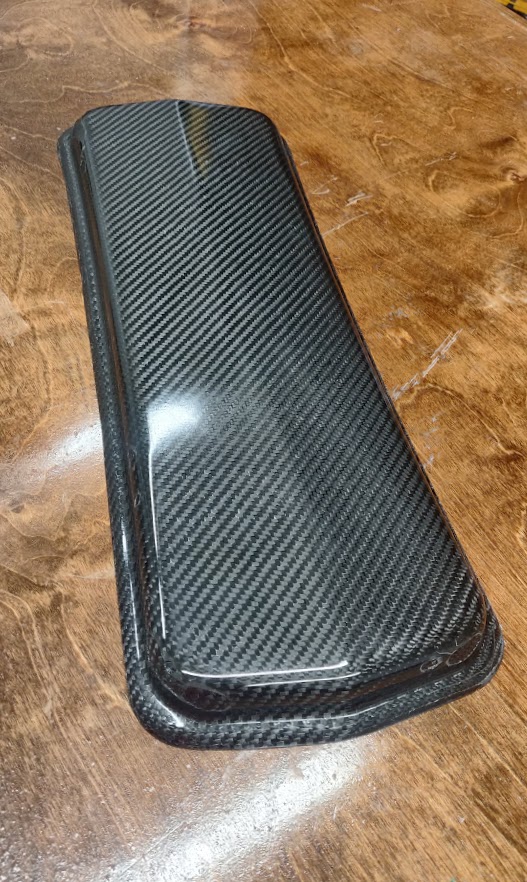 Using expired west systems WB-400 resin and CS-215 slow hardener, there was no issue wetting out the entire part. However, because the fabric could not fully conform to the mold a slight gap was left around the corners and when the vacuum leak developed, air was sucked into the voids in the corners of the mold leaving some unsightly bubbles in the surface finish.

For an experimental first attempt at infusion, I can’t really complain about the results. For the next few enclosures I am going to do a traditional wet layup using sheets of prepreg fiber, might put down a clear gelcoat layer and let it tack over before laying down the first layer to insure it will properly conform to the mold.

Was it worth all the effort? If analyzing the time and cost of it, definitely not. However I do this for the heck of it, to learn, and so I can say I did it, so I consider all the extra effort to be worthwhile.

It’s an absolute masterpiece! It’s no small task to get the finish right on the plug is it?! Just to add, there’s a market for the switchblade enclosure too!

Now that all that work is done, can you pop out more with minimal effort?

That enclosure looks amazing. Maybe summer time I will try to make one myself. Yes. I agree with you the learning process is the most important.

Well I would say that you could easily do that without infusion method, what I am about to do is to make a plug, out of the plug im going to do a form (gelcoat and few layers of fiber glass), once I got the mold I will lay carbon fiber by myself, infusion would be best but much more expensive.

That’s the hope, doing a layup takes a couple hours of work, over the next few days I’m going to try to make a few of these and see how they turn out.

The infusion method is definitely not required to get good results, classic vacuum bagging with an absorbant breather cloth also works great. Infusion definitely has a bigger learning curve to get perfect results.

Looks good i did something similar last Summer vacuum bagging but not infusion.

I made a second, thin, test enclosure to refine my technique. All the edges on this second part turned out great, however I made the mistake of putting my vacuum line right in the middle of the enclosure which distorted the fibers. 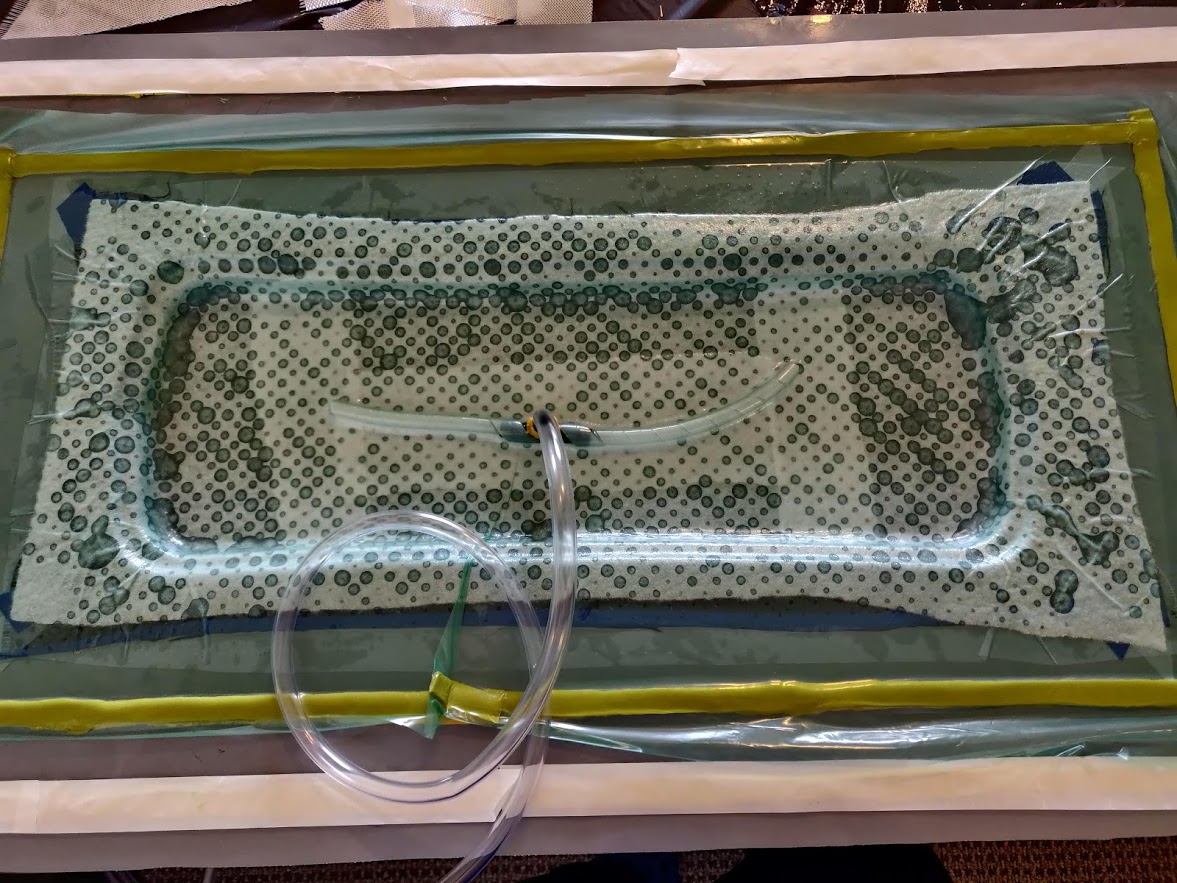 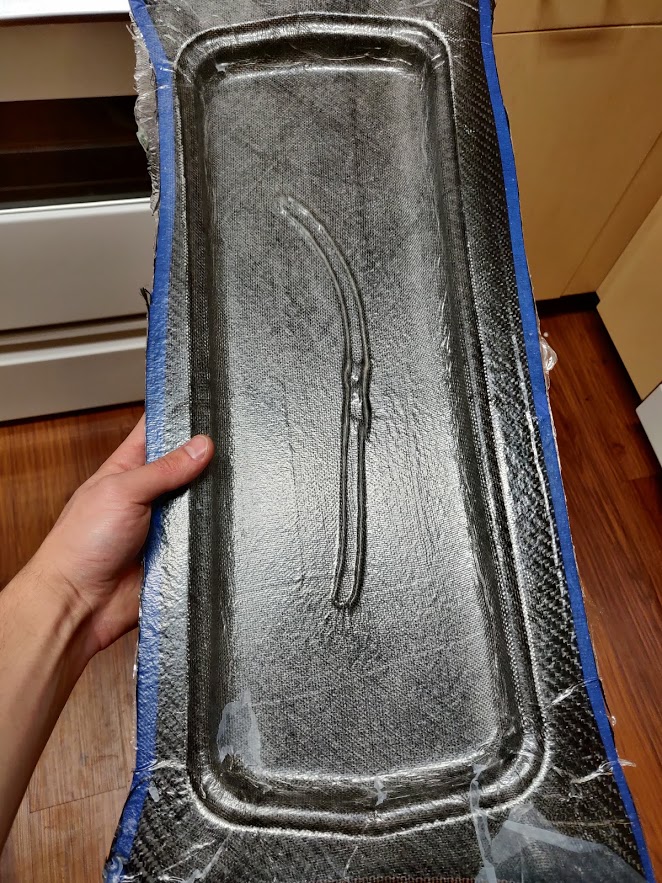 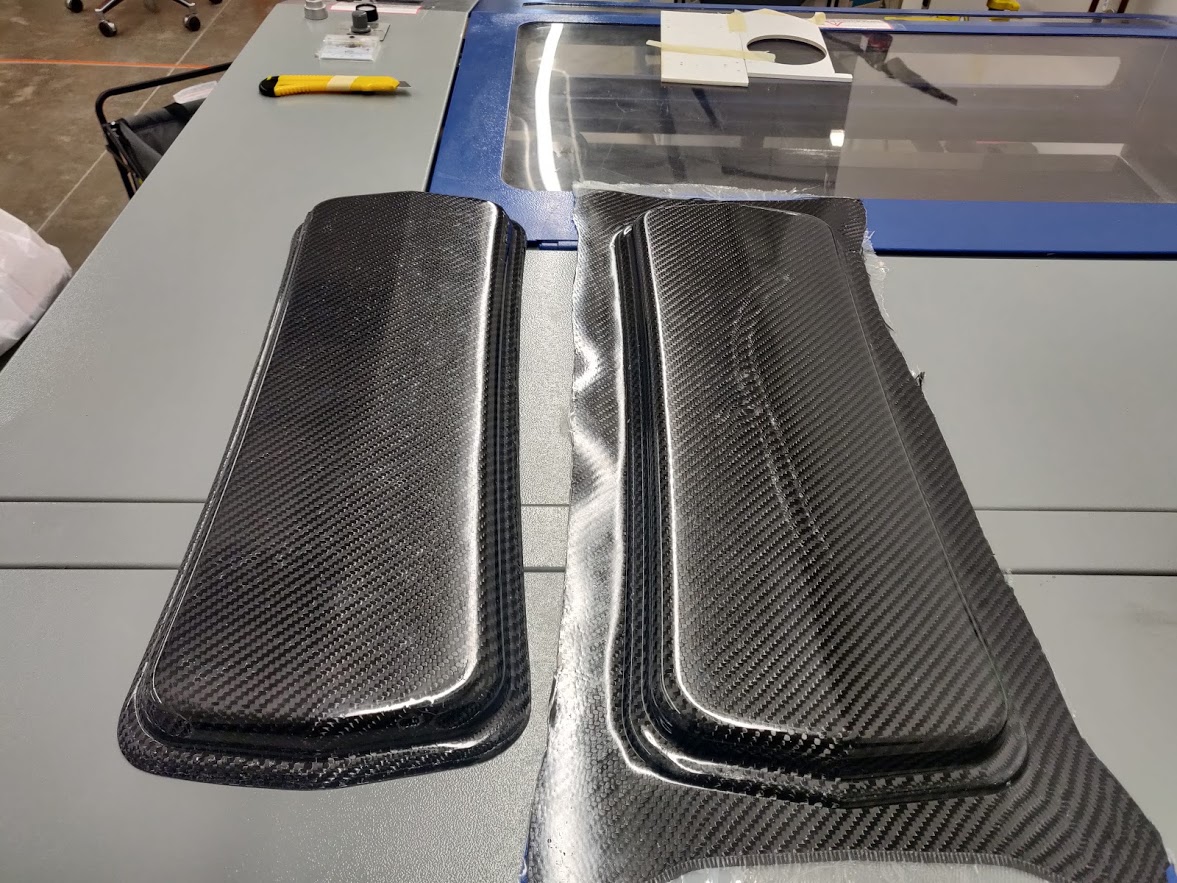 So this morning I laid up the enclosure that I will be putting on my Landyachtz Switchblade deck. The first layer is a super thin plain weave E-glass for better surface finish. The second is a layer of 187 gsm orange and black CF/Kevlar hybrid 2x2 weave this is for looks and for strength. Then it is backed with 2 more layers of 200 gsm plain weave carbon fiber (one 45* and one 90*) for strength, and finally it is topped off with another thin layer of E-glass to provide an insulating layer, in case any enclosed electronics happen to touch the enclosure directly. 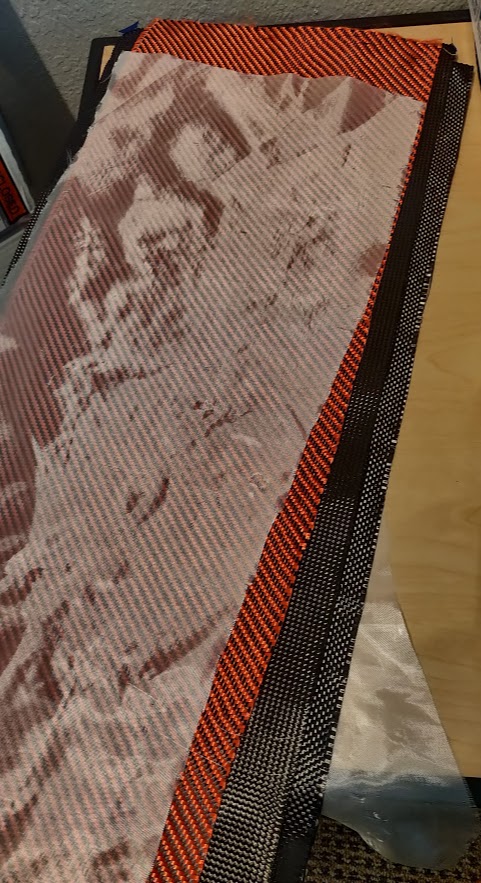 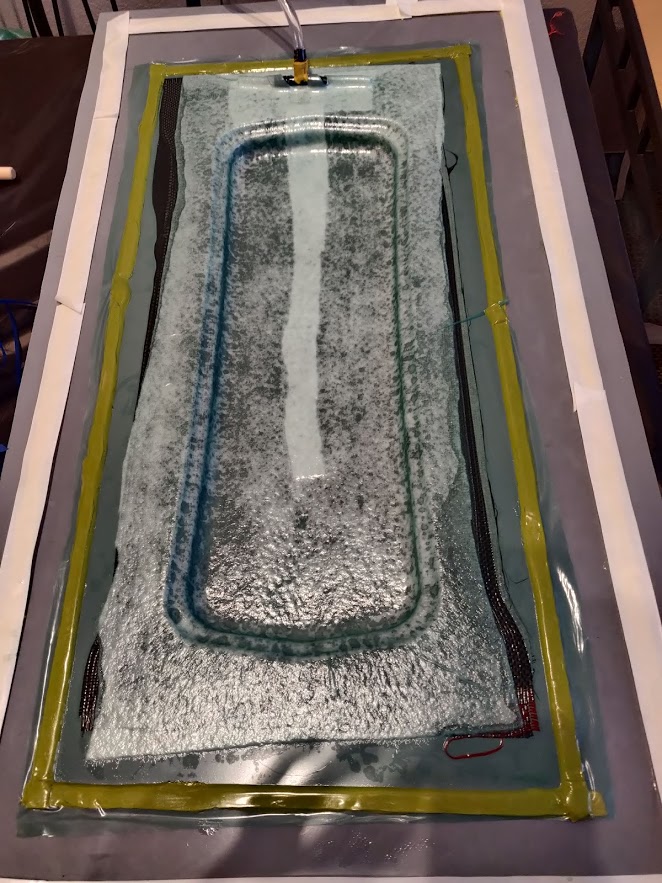 So currently the new enclosure is bagged and curing. Tomorrow morning it should be fully cured and ready to throw on the board!

Well, as it turns out, the e-glass top layer that was suppose to make it shine was a bad idea. Right out of the mold it looked terrible. 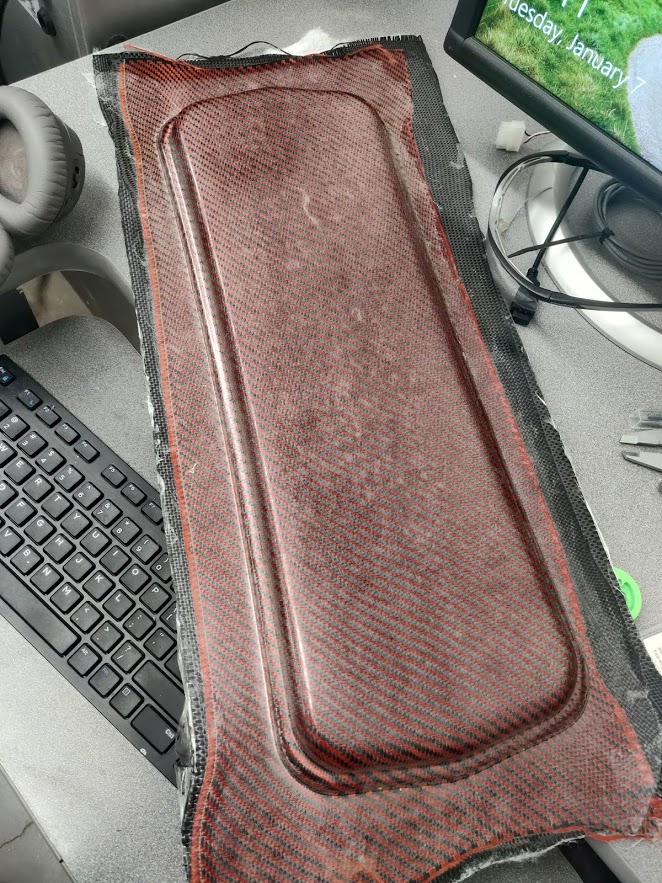 The e-glass just didn’t lay down perfectly clear, there were tiny bubbles of air trapped between it and the kevlar/CF

I sanded and cleaned the surface which left it looking like this: 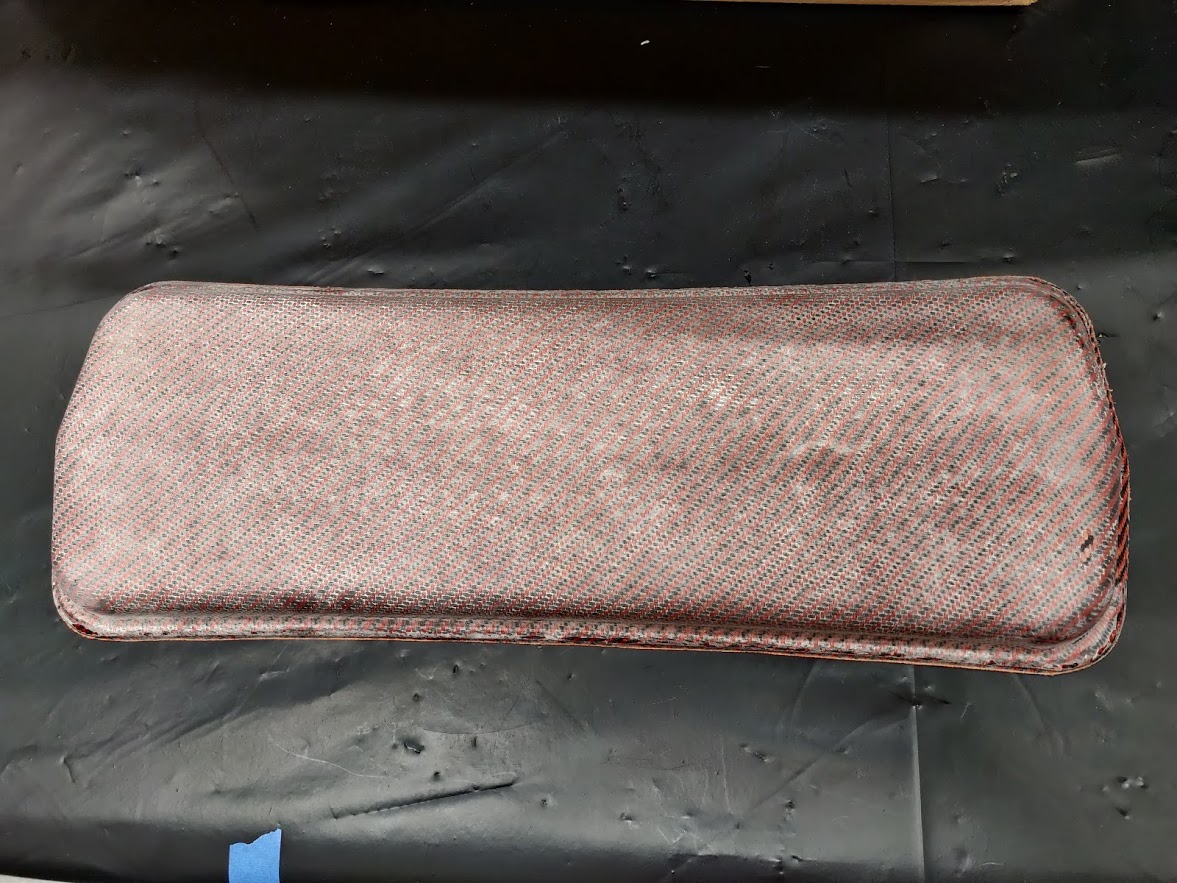 At this point I thought the part was ruined, but I went ahead and applied a layer of resin to see if it could be recovered. 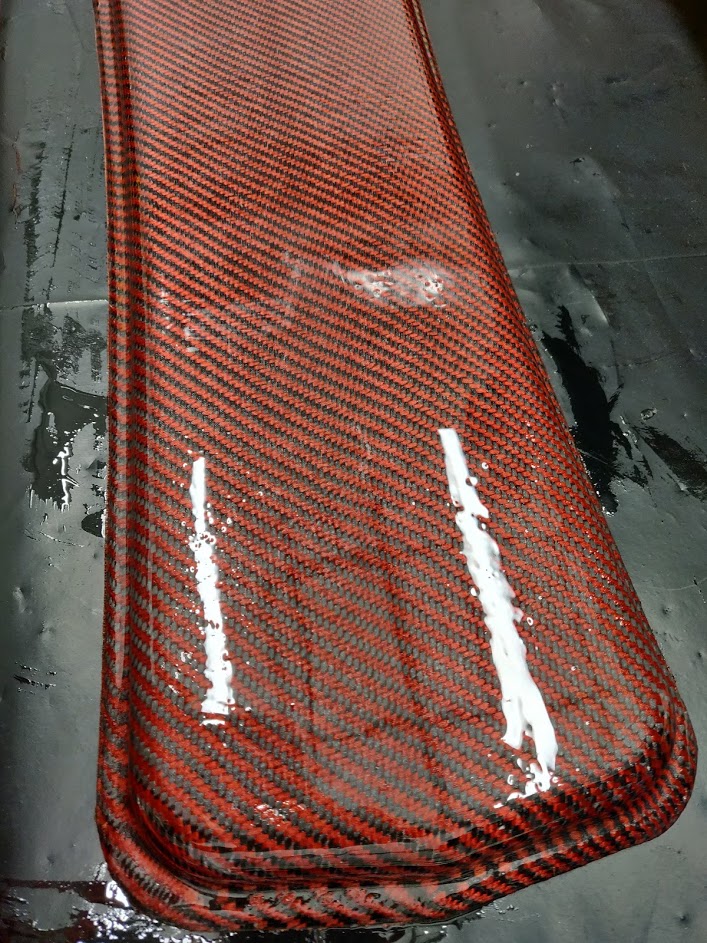 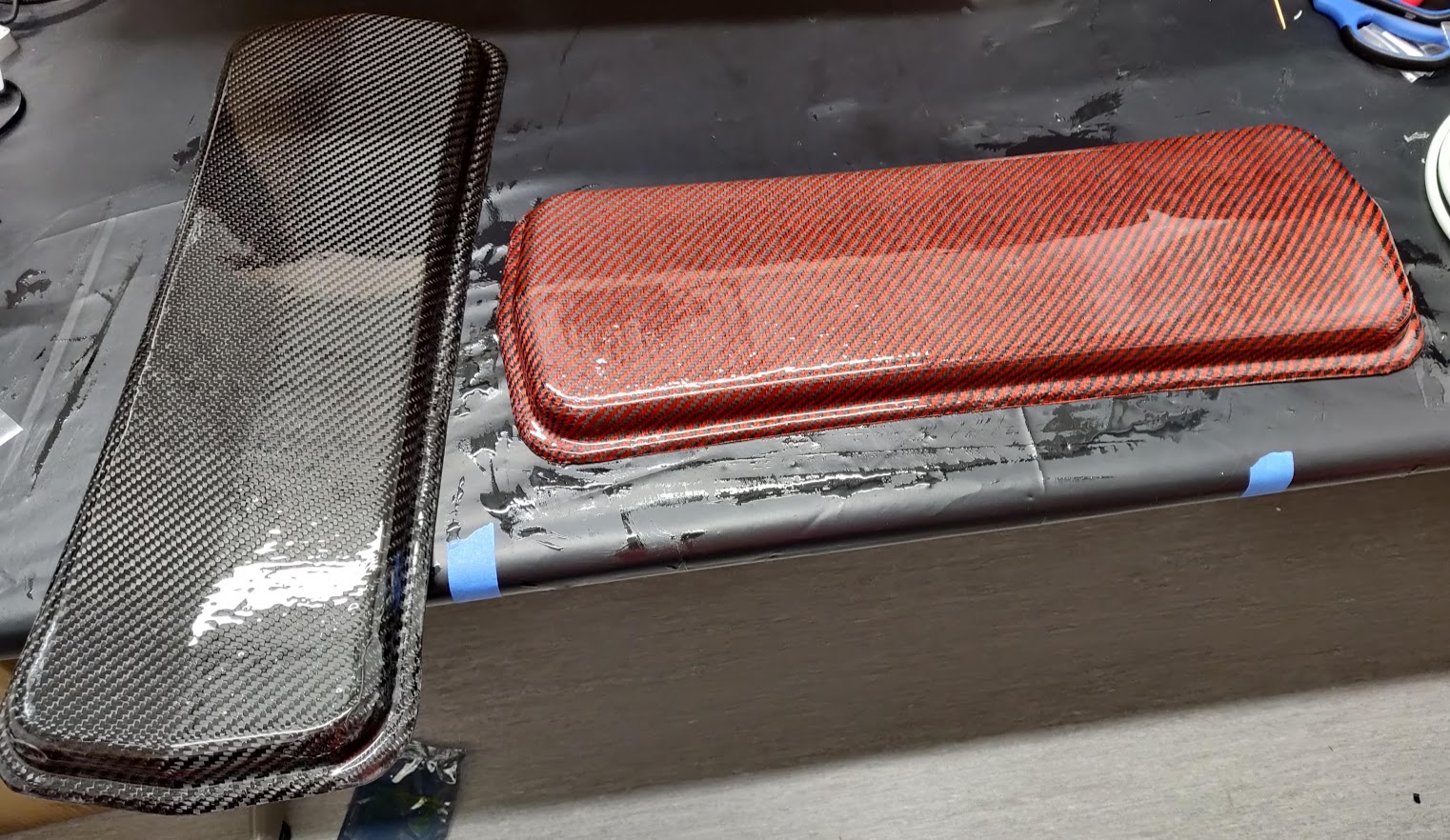 While the surface finish here is not perfect, since its brushed on and different parts of the enclosure was absorbing more and less resin, it at least lets the color through.

Once it cures I could sand it and polish it, but if it doesn’t look too bad I’ll probably leave it as is. The enclosure will end up getting scratched up anyway as it travels around at 20 mph,1.5" off the ground.

I am planning on doing another layup with the 2x2 carbon fiber tomorrow, hopefully with all this trial and error it’ll come out perfect.

After that I am going to experiment with some other fabrics. I found this stuff at the local crafts store, that would make for a really cool looking enclosure. I’ll back it with fiberglass for strength but the colored fabric should work just like any other fabric in the layup. 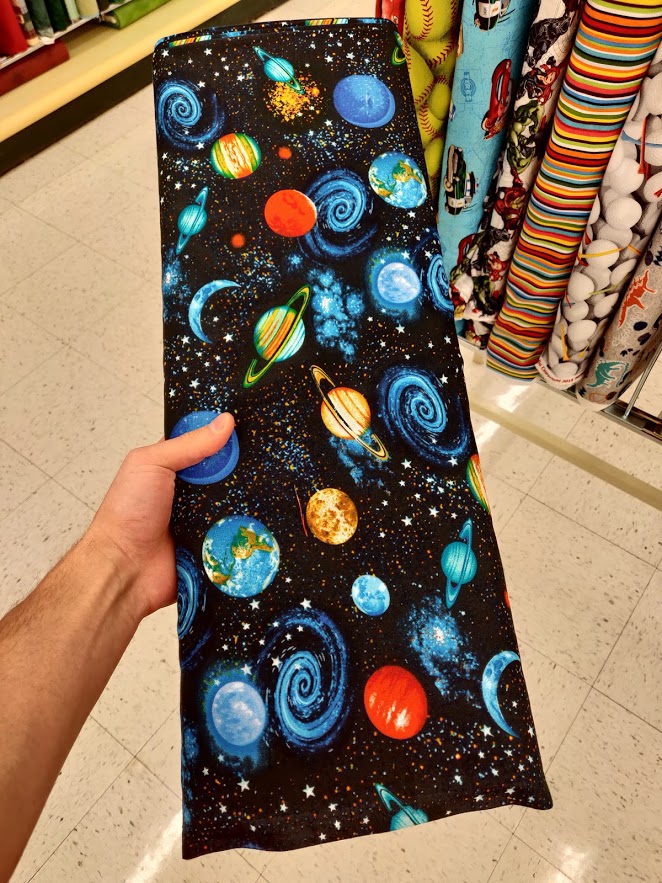 After putting all this time into making the mold and experimenting with layups, if the interest is there, I might have to make and sell some of these. If the colored fabric turns out well I could offer customized patterns and I could also laser cut out logos or other shapes and lay them into the mold.

The enclosure is 21 inches long, and big enough to hold a 10s3p battery, BMS, and Focbox Unity with room to spare.

Believe me. There is interest in these!

Dude is that a CO2 laser? How big is that machine?

Definitely consider moving all of this over to the forum. Your work is fantastic!

Hmm, so the news forum would be more appropriate. I need to figure out how to move it, pretty new to this forum still. I’ve done lots of reading of the past couple years, but not alot of posting.

Great work. Where did you buy your carbon fiber fabric from?

Also, you need to go to new forum, the forum is set up like this one is. Mostly everybody thats here are also there.

Any way 12s4p would fit? Maybe delete the ESC?

If 12s4p + tiny bms + unity fit, and price is reasonable, you’ll sell heaps. But then you’ll be our slave making enclosures endlessly