the new prototype has been built, settings are being tested, and the final adjustments are being made to the shit that does the shit and that other thing. Excuse all the technical jargon, I’m a genius and forget i need to talk on a certain level. So here’s some pictures that even i can understand.

i mocked up a new form to hold my burrito in place. IT worked out well. IT not only held my burrito, it looked sick as hell with the deck shape and would have plenty of room for aftermarket mods. Also, flangeless.

Then we had a hurricane and i got distracted for a month or so, and the motors were way out still anyway.

Then i finally got a sample for the fiberglass people and had to rework some things.

Then the REAL part came and i took a picture of it on one of the fuckup decks i did while fucking up everything trying to sequence the right mistakes into the desired success.

We’re still waiting on all the parts, the first batch of boxes has been ordered and i’m ironing out the kinks to reduce the number of fuck-ups when cutting the decks. They end up something like this, but keep in mind, this is still a fuckup deck.

I went ahead and prototyped on the fuckup deck so as not to waste any more of Jerry’s cash on Evo decks. Secretly i want to fuck more decks up so i can have a bunch of Evos to experiment with but don’t tell Carvon that. Shhhhhhhh!

but the results… are inarguable.

That speed test was done in BLDC mode using Sensored Hybrid settings. That won’t be production, i just wanted to see how loud they would get and how much they burped on startup. They indeed belch a fair amount of joice when starting from a standstill in BLDC mode.

We then loaded FOC on there, tweaked a couple of things in the motor tab and viola. FOC is almost or just as fast as BLDC Hybrid on the top end. And its dead ass quiet, like ludicrous quiet. I don’t even have silicone gaskets on the board yet and the 74a Flywheels are just silencing the shit like a boss. Without the silicone seal, the box creaks a little against the wood but that will not be an issue in the production boards as they will all be sealed.

I’m using standard pan head bolts throuout the build, for botht he trucks and the box. these will be hacker freindly, i mean shit, a hacker is building them, so of course there’s room to add your own flavor after the sale. For example, my giant 5P fits in here, so you can do that immediately.

My God, you’ve done it again! 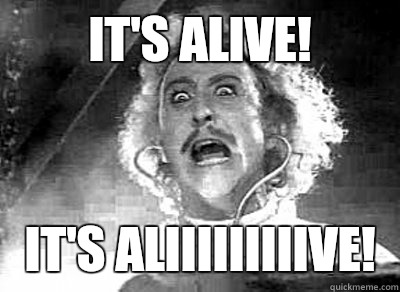 This Saturday at Florida Performance Day, a disorganized debacle of esk8 debauchery, there will be an opportunity to try out this alien shaped carve missile.

The alien-shaped carve-missile doctor-creator just shot a link across my bow without first warning me it was a facebook link. Think about the children, man!

FUCK! my boat is still in poland!

you weretaking a boat down here and got stuck in poland? you live on a boat? i’m confused.

LOL. remember? you bought me that plane ticket (which actually turned out to be a a boat ticket), I hopped on the boat in early december hoping to make it to florida in time

this entire paragraph was sarcasm

A mere clerical error! It was supposed to be a groupon for Llama rentals.

Any updates on this?

I pledged an EVO on Kickstarter. I am backer number 62.

I just read that your 12S5P pack fits in the enclosure. Of course I will need that. Is the standard pack a 12S3P of 30Q cells?

When you get around to building mine, I would appreciate discussing this upgrade with you.

A little bit of update in terms of motors here https://www.carvonskates.com/blogs/news/axles-are-on-the-way

Thank you for that.

The last update I had seen was the one in February.

nice… wish he/they would respond to our emails though.

Not answering email and lying when you will receive your purchase is no way to run a business!!!

Just got an email from Carvon. They’re shipping!

backer 58, haven’t got an email yet