Connecting a Brushed Motor to Vesc

Looking through the firmware on github, there’s definitely something implemented. Still looking through it to see if it does what you need it to.

Thank you any help will be very much appreciated!

Sorry I might be wrong. I believe previously it wasn’t supported, maybe now it does. But I would like to see brushed motor working with VESC as well.

Could you please post your VESC configuration and also state what VESC version you have.

I am unable to post that information until Monday as this is a school project and I will not have access to the VESC until Monday. But here is a picture of the exact VESC I have so you might be able to tell. Furthermore, the VESC is not configured because of the whole brushed, brushless situation, however, I have given info on the battery we are using so if you might be able to tell me the best configuration for the VESC, As I remembered properly, Benjamin stated by himself that VESC are not meant for brushed motor. Brushed motor doesn’t need ESC anyway. Just hook up voltage potentiometer and you have speed control in there. 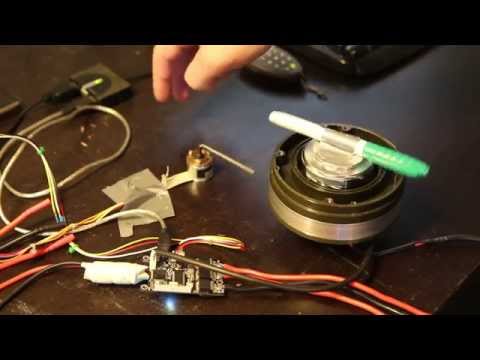 Could it be possible for you to explain how to setup the VESC with the brushed DC motor. A step by step instructions guide would be nice.

Could it be possible for you to explain how to setup the VESC with the brushed DC motor. A step by step instructions guide would be nice

There is not much to tell: connect to the VESC using BLDC_Tool, select DC (instead of BLDC or FOC) in the most left tab. Then connect the first and third power cables (leave middle one open). Make sure the voltage going into the VESC doesn’t exceed your DC motor voltage.

I just tried it with a brushed DC motor (12Volt) and it works just fine.

What do you mean by this?

There are three wires coming out of the vesc on the middle side. Just use the side ones and not the middle to connect the motor. Not sure if polarity matters though.

Thank you everybody for your help, the VESC is now working with the motor.

I suspect I will have the same problem: I want to change my AT big skate from lead to Li-ion battery, and I believe I have a brushed motor on it. I have just ordered a 10S4P and a VESC, and I am glad to see it is possible to make it work. Was it difficult to do the set-up with the VESC?

And with regard to erwincoumans remark above

Make sure the voltage going into the VESC doesn’t exceed your DC motor voltage.

my motor says 36V so do I need to limit the output of my battery through the VESC as it will be slightly above that limit?

I know its been awhile on this post but I want to know as well. “my motor says 36V so do I need to limit the output of my battery through the VESC as it will be slightly above that limit?” @lox897 @erwincoumans @msthg5000

You will be fine, what overheat a motor is the current

Of course in brushed motors too much voltage can damage/destroy the brushes, but no a bit more than the rated

@Pedrodemio So if the current goes over its rating it can be damaged? But im guessing the current would have to be continuous in order to overheat and damage?

Yeah, if I’m not mistaken the VESC still limits the current with brushed motors, so you can gradually increase it as you fell if it’s getting too hot

I’m trying to setup a Flipsky VESC in DC mode to run a brushed 24v 120w zy6812 motor on 6S for my sons build. He’s 9 and only weighs 20kg. I’ve had it turning with very conservative battery/motor current values but it did’nt run very fast or with much power. Prior to this we were using a rc car esc which only allowed us to go to 4S but top out about 10mph and he wanted it to go a little bit faster. So I thought I’d try it on 6S but couldn’t find a cheap brushed rc car esc over 4S but the flipskys on eBay are so cheap now i’d thought I’d give one a go. So what sort of min and max motor/battery settings should I be using for this setup. Can’t find any max or continuous current spec’s for this motor but 120w/24v is 5amp isn’t it. The battery is made up of 3 x 2S 40C 5000mah lipos in series. Currently I think I’ve got max motor current at 5 amps. Do I just keep upping this until the motor starts getting warm.

I doubled the motor current up to 10Amps and the powers back to similar as it was with the RC car esc. Motor doesn’t appear to be getting to warm either. The top speed is up from 10mph to maybe 13-14 mph at a guess so he’s pleased. It means he can keep up with me as we cruise around the estate. I’ve also ordered another HM-10 Bluetooth module we can see some live figures for speed, current and voltage.

When you use the VESC in DC mode can you use dual motors as in two motors connected in parallel to the two VESC outputs (centre output phase not connected) . Would I need to double up the AMPS limits say if I was going from one 150W motor to two 150W motors so 300W in total. I know you can’t with brush-less motors but I have seen this in Brushed ESC RC cars before.

@ricoghardforth As far as I’m aware NO you cannot connect two motors either in series or in parallel to just one VESC. You would need anothe VESC fo add another motor. Then you can either connect the two VESC with a CAN BUS connector and run them as a master and a slave or you can split the remote receiver connection between the two VESC and use them both as masters. Doing so you will want to split your battery max amps between the two motors (you can fudge this a little for performance, just pay attention to the readings & possible faults you get in the BLDC tool and as always check for overheating or any undesirable motor activity) as your one battery will now be powering two motors, then adjust your motor max amps until you get the performance you are looking for while paying attention to heat and battery drain accordingly. The VESC do have thermal cutouts so just pay attention to the heat created then adjust your cutouts and/or motor & battery settings to prevent damage or add a few P’s to your battery setup and increase your battery max amps. Hope this helps. Getcha Roll On!