Does it matter which way you mount your trucks?

I feel like a total noob typing this out but my searches didn’t yield much info. With longboards it seems customary to mount the trucks with the bushings outward as opposed to inward on usual skate trick decks. Does it really matter which way though?

In my current build, I want to reverse mount my motors, but the Boardnamic Mounts are kind of short, and I could get the angle higher if the bushings weren’t in the way and I could mount them inward.

What’s the scoop on this?

Hey my friend. It all depends on what trucks you have. If you have longboarding trucks then they will be most likely reverse king pin or RKP and will have the bushings outer. If you have traditional trucks or TKP then the bushings will be on the inside. Facing each other. Never reverse either.

Cool, so how do you know which they are?

In theory if you reverse, tighten, and lower the angle of the back truck you get a sliding motion but a massive turning radius, its a bad idea and you shouldn’t do it, but you can

Traditional king-pin (TKP) trucks point above the outside of the axle, reverse king-pin (RKP) has the kingpin go under the axle

RKP have an angled kingpin and TKP are more vertical. 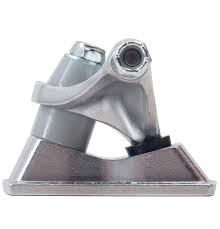 So, maybe an angled riser would be a better way to get the additional ground clearance with my motors

Careful with angled risers, the angle the king-pin makes with the deck/ground changes the turning/stability…

What deck are you using?

The pivot/cup always goes toward the end of the board, away from the rider, regardless of where the bushings are. The bushings will be on different sides depending on if it’s TKP, RKP, DKP, or NKP

Cool and what do you want to achieve with it? Fast lunacy or carvy sensibility?

Build thread is this one for reference.

Starting this thread now since I’ve got a good amount of the parts coming in and still need help with a few tips and suggestions. I won’t be able to see how everything fits together until I slowly get more parts in. I got this deck in my Landyachtz...

I’d like to be around 30mph top speed, stability would be ideal.

I’d like to be around 30mph top speed, stability would be ideal.

That deck is really designed for RKP trucks but its on the short side for a longboard so if you want it to be carvy then you could go TKP. Keep the thing under 30mph though. RKP are designed for stability at speed so if you want to go fast then RKP all the way and do some reading on angles and bushings.

I have calibers I’m using, being Rkp, they should be good for stability yeah?

Already have the matching big Ben enclosure for this deck, and I like the short size.im small and light

Just here for the laffs